Jaipur - “The Pink City”. The city of palaces, forts and royalty. Also the city of magnificence and splendour. The city is known for one more thing and that is its delectable cuisines. Yes, we are talking about authentic Rajasthani dishes that are really high on the taste quotient. Dishes ranging from dal-baati-churmato laal maas, keema baati, ghewar, kulfi and a whole lot of other dishes that a treat for your taste buds. Rajasthani people sure know how to live in grandeur and their food is as mind blowing as their living style.

When visiting this exquisite city people often get confused with such varied option of dishes. The local street food of this city is spicy, tangy, ghee-dripping and simply irresistible. Savouring the dishes here is not just about tasting the local cuisines- it is a cultural experience! For the ease of all the travellers visiting this grand city, we have compiled a list of the street food options that the locals simply swear by!

1. Golgappa at Chawla’s and Nand’s

Who doesn’t love Golgappa? The spicy wonder also known as puchka and paani-puri are something out of this world and everyone’s (well almost) favourite dish. The best place to eat golgappa in Jaipur is the Nand and Chawla’s. These are actually two competitor stalls that stand to each other on the Fashion Street and are thronged by people. You can choose from a variety of spicy, sweet and tangy chutneys and gorge your way through these custom-made wonders. Try the golgappas at both the stalls and decide for yourself which one’s actually the best!

Pyaaz Kachori is something that Rajasthani’s specialise in and you can’t let this one go. Once you taste these high-on-calorie-but-even-higher-on-taste kachoris you won’t be able to stop eating it. The most known place in Jaipur for this delectable item is Rawat Mishthan Bhandar. This is actually a restaurant but is more popular as a mithai shop. Apart from serving the pyaaz-kachori they have almost 50 other varieties of sweets. You can also try the samosa, mirchi-vada, aloo bonda, dal kachori and every other thing that is basically a nightmare for people on a diet. Be assured you won’t regret savouring these spicy Rajasthani dishes.

If you are a tea-lover this place should be a must and on top of your list. Situated opposite Ganpati Plazathis place is renowned for their masala chai and bun-muska. The hot chai high served with the bun-muska is sure to make every tea-lover sing praises for this place. You can also try the bun-samosa which a speciality of this place and is a craze among the locals. It is always packed and you will find people sipping chai and gossiping their heart out here. Be sure to visit this place the next time you are in town.

P.S. – This place closes down at 6 pm so make sure to visit it earlier!

Masala Chowk is a one-stop place to end all of the street food cravings. This new destination for Street Food in Jaipur is an open food court in Ram Niwas Garden. The place acts as a home for all prominent Indian street foods and the common open sitting gives the families and friends a freedom to choose from the vast varieties of street foods. This place was intended for the tourists and has gradually turned into a favourite hangout spot for the residents of Jaipur. Masala Chowk has street food types like Samosa, Jalebi, Gol Gappa, Chole Bhature, Tea, Mishri Mawa and also South Indian Dishes like Masala Dosa and Uttapa but in a different style. This world of mouthwatering food has an entry ticket of INR 10 only. Masala Chowk takes care of everyone’s taste buds.

Al Bake, more popularly known as “Chicken Paradise” is every chicken lover’s heaven. They serve every variety of chicken from swarama to tikka and have a huge variety on their menu. Located on the MI Roadthe place is most popular for its Kaathi Roll. It is a hugely crowded place with a majority of people ordering Kaathi Rolls which is basically a delight to consume. This place remains open until midnight and is a very famous spot among the youngsters. Your street food expedition in Jaipur is considered incomplete without a visit to this place.

Are you someone who loves the mouth-watering butter laden pav bhaji as much as I do? If yes then this place is a heaven for you. The Pav Bhaji stall of Pandit located near the Birla Mandir has earned a permanent name on the list of best places to eat in the city. The freshly made spicy pav bhaji loaded with butter is loved equally by the locals and tourists. A plus point is that all this scrumptious food comes at a very nominal price! The aroma of the simmering pav bhaji will make you forget your entire dieting regime and you will surely have a feast at this place.

You might wonder what’s so extraordinary about an omelette that this place has a special mention on this list. Well, it’s not actually just the omelette but this place which makes the omelette special! The Sanjay Omelette located at Bapu Nagar is a place that serves 20 different varieties of omelettes. It is run by Sanjay Sharma who was a participant in the famous show – Masterchef India.  This place is visited by people from around the city, as well as, tourists coming to the city. It has been in operation for over two decades now and is a must visit. Their signature dishes are the egg pizza and masala omelette which are not something to miss out on.

If you thought that Jaipur is a city which is high on the vegetarian food then you guessed it wrong. It is a city which is also famous for its Laal Maas and Chicken Tikkas. To satisfy your chicken-craving no place can be better than Sethi Bar-Be-Que situated at Raja Park. It is a craze among the non-vegetarian crowd of the city and is styled in a total dhaba atmosphere. People generally prefer to eat in their cars here so might find a long queue of cars outside this place. Served with tandoori roti, masala, onion rings and lemon the chicken tikka is something to die for (obviously not literally!). Make sure to also try the Lahsooni Chicken Tikka and Haryali Chicken Tikka which is a speciality of this place. 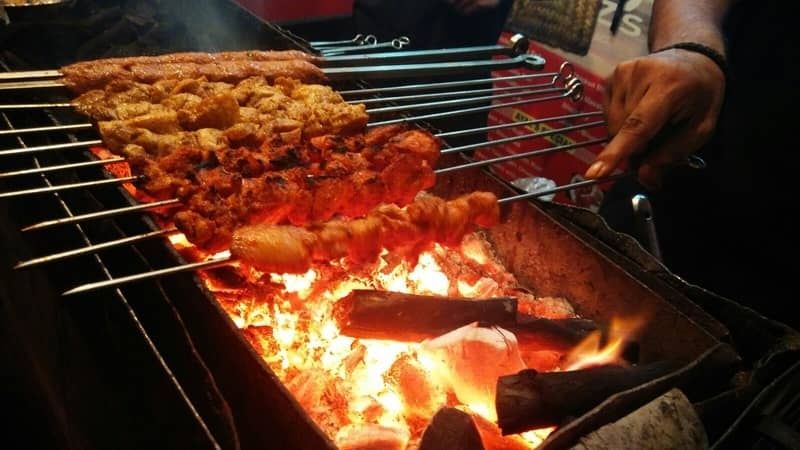