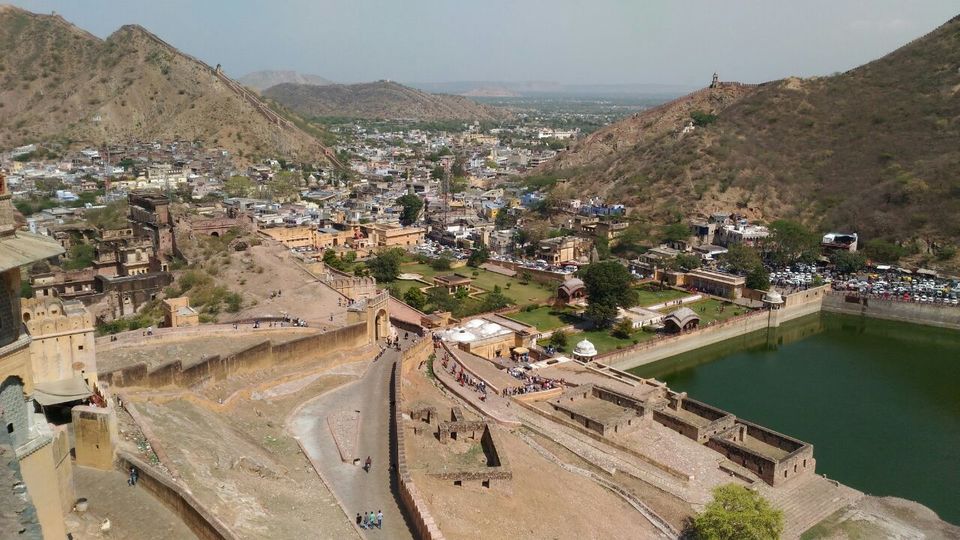 A trusted general of Akbar, Maan Singh, built a fort in 16th Century and started ruling the area surrounding it.That fort is now called Amber fort and the area under his reign is known as Amber state which is 11kms from the Pink city.

The fort, built with red and white sandstone with a blend of Rajput and Hindu style of architecture still stands as a grand example of ancient Indian architecture.

Me and my husband got a golden opportunity to visit this marvelous Rajput architecture during last March.

It was not even 2 months of our post-settlement period in Noida. I was on paid holiday since a month and wanted to utilize the time.A long weekend was coming and in no time we decided to go for it.Planning the trip was quite easy as Jaipur is only 5 hours by road from Noida. New car had already arrived and my husband was longing for a good road trip with good roads(not to worry about the damages done to the car on hilly roads).

Hence, this was a golden opportunity to experience a road trip(only two of us) with our new car. Oyo rooms were booked for 2 nights and we headed for exploring the Pink City.

We started from Noida at about 8 in the morning and reached Jaipur by 3pm. In the middle, we had taken 2 halts(one for breakfast and another one to give him rest for sometime from driving)

This route was a bit congested due to traffics and heavy vehicles and apart from a few places the road was good overall.

This longer route is relatively good compared to the other owing to less traffic on the Taj Expressway and more greenery on both sides of the road.However, tolls are on the higher side if you follow this route.

We opted for this route as we planned to stop at Mathura to celebrate Holi.

We started from Jaipur at about 12pm on the next day of arrival. Jaipur roads are much better than other cities and you wont face much traffic once you cross the road near the City Palace and Hawa Mahal. Its half an hour drive and you will soon reach the city outskirts. There are quite a few restaurants and eateries near the fort along with few lodging with the fort view.

The fort is on a hillock overlooking the famous Mughal garden and Maota Lake.The garden is formed in a star shape.It is said that saffron flowers were planted in the garden but climatic condition of Jaipur doesn't allow those to thrive in the garden.

Its a huge area and one should have minimum of 3 hours at hand to cover the entire place well.

Entry to the Fort:

You would enter the fort through the Sun Gate, Suraj Pol.Ticket office for entrance ticket and others will be located in the courtyard. Some road routes would take you to the Moon Gate, Chand Pol which is located right opposite to the Sun Gate. You can also hire audio guide or a guide in the ticket counter.

From the gate, you would find a stairway that would take you to the main palace. There is a small stairway in right which would lead you to the temple of Siladevi.

The fort comprises of a number of buildings with Diwan-e-Aam, SukhMandir, Sheesh Mahal being the prominent ones.

The main stairway would take you to Diwan-e-Aam.

Diwan-e-Aam or Hall of public audience is a large hall that stands from the support of two rows of pillars. Each pillar is ornamented. The hall is open on three sides. The king used to sit in the hall and listen to the queries of common men. This hall is famous for its mosaic glass works. Kings also used to meet important ministers and guests in this hall.

From the hall, you can find the apartments of kings. Beyond that, you would find Ganesh gate.

Many Films including Jodha Akbar was shot in the garden.

Opposite to the hall, you will find the Hall of Pleasure, Sukh Niwas. SukhNiwaas or SukhMandir is a hall made with sandalwood and ivory. It is located right opposite to the Hall of public audience. There is a small channel that runs through it that carries cold water. This is an ancient method of keeping the place cool. Though the term ‘Mandir’ is used in the name, this is not a temple. It is a hall where kings and queens relax.

In the fourth courtyard, you would find the queens’ apartments which includes the famous Mirror Palace.

Sheesh Mahal or the Mirror Palace is the most beautiful part of this fort. The walls and the ceilings in this palace are carved with beautiful flowers and other paintings made with glass. A queen of the fort used to love sleeping under the stars. It is said that ancient custom of the land did not allow women to sleep in open air. King called upon the finest architects in the region to solve the problem. Thus, the mirror palace was built. It is said that if two candles are lit in the palace, it would look like thousands of stars glittering in the ceiling.

1. Elephant ride available from morning till afternoon. Plan well ahead to enjoy a ride. The ride will cost 1000/- for two people and it takes approximately 20-30 minutes (depending on elephant traffic!) for the elephant to slowly trudge up the hillside to the main courtyard.

2. Light show at night.Get the tickets from the counter.

3. Visit the museum and take a lazy stroll in the garden inside the fort.Its endowed with many paintings of ancient hunting styles, portrait of important Rajput rulers and others.

4. Classical dance program happens in the evening in Sukh Mahal. One can get the tickets from the counter.

5.Enjoying puppet shows and traditional songs. These are available during dinner time.

6.Turban museum is free to enter in the fort. You can find a large collection of turbans here.

7. There is a restaurant called "Surabhi Restaurant" inside the fort where you can enjoy your meals.

8. Last but not the least enjoying a panoramic view of the Jaipur city in a cool breeze from the the fort.

On reaching Amer, we decided to visit the fort pre lunch. Though the scorching sun of Mid-March restricted us to have an elephant ride in the fort, we were more than satisfied after 1 hour of roaming around the fort enjoying the beautiful blend of Hindu,Muslim and Rajput architecture and style of ornamentations.

While having the lunch at a nearby restaurant we enquired about Nahargarh fort.It is the place you can see in the famous movie "Rang De Basanti". The restaurant owner informed us that Nahargarh fort is very nearby but the road leading to the fort is in a very bad condition. So we dropped our plan keeping in mind of our new car.

He also informed us that the place is quite deserted and not safe after evening.As it was already 4PM by then, and safety should always come first, we decided to head back towards Jaipur City and had a nice and peaceful evening walk at Jawahar Circle.

But lets keep that experience along with other places of Jaipur for another story.

Some Information about the trip:

Gumaan Heritage Hotel(900 rupees per night for a double bedded room). The rooms were very neat and clean and were location some 20 minutes away from the City Palace. However, room was lacking proper ventilation(not sure about all the hotel rooms).

Food provided was vegetarian and overall good though a bit spicy.Breakfast was complimentary.

4000/- approximately for Ford Aspire(Private Vehicle) if the above mentioned route is followed.

Taj Expressway Toll charge is 300/- one way. That can be avoided if you choose the other route.

Entire toll charges was approximately 800/- for the entire trip.

*For Commercial Vehicles Tax along with toll costs are to be included.