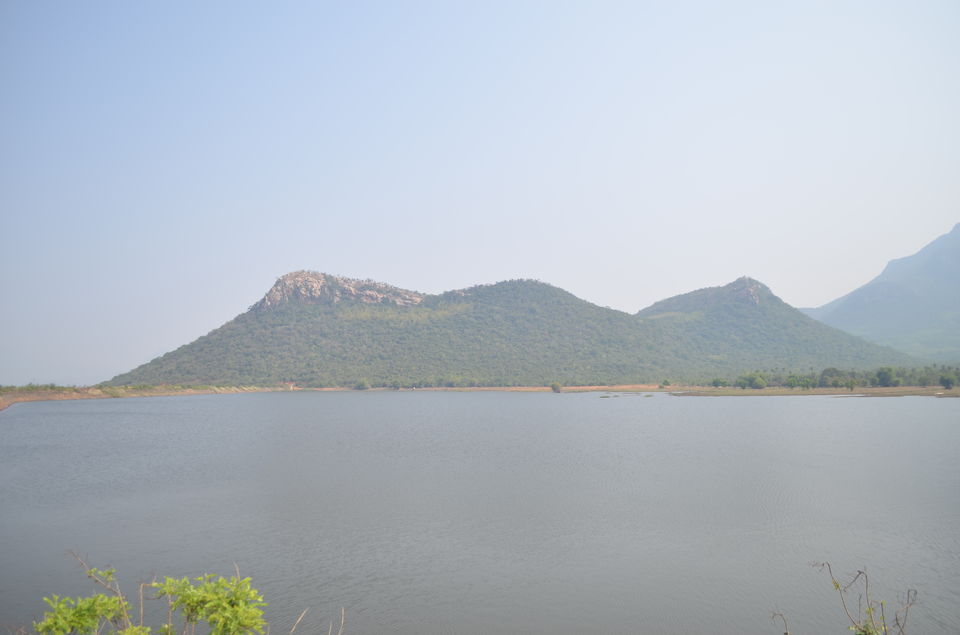 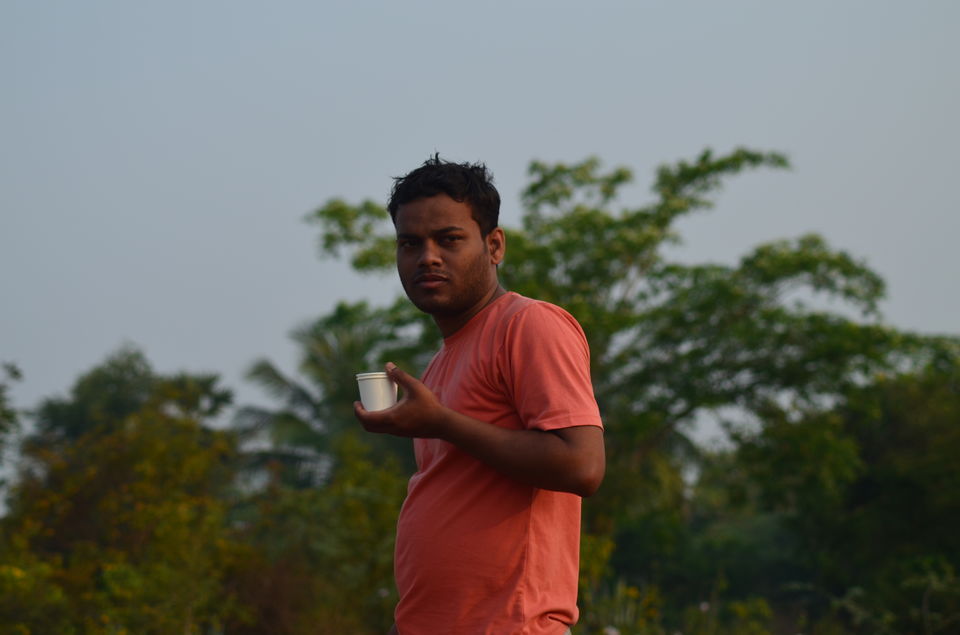 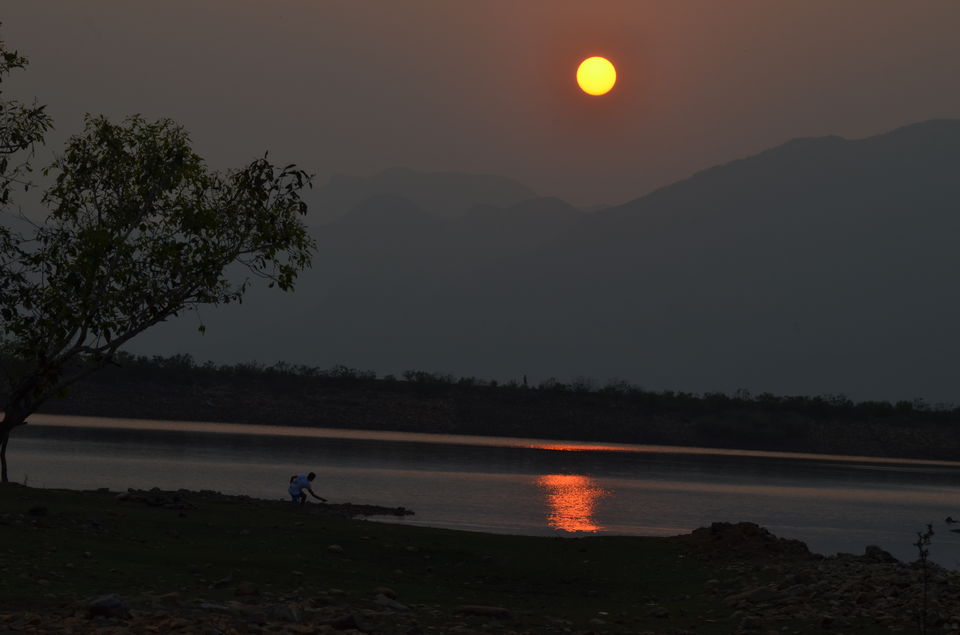 Somewhere near Puttur during sunrise. 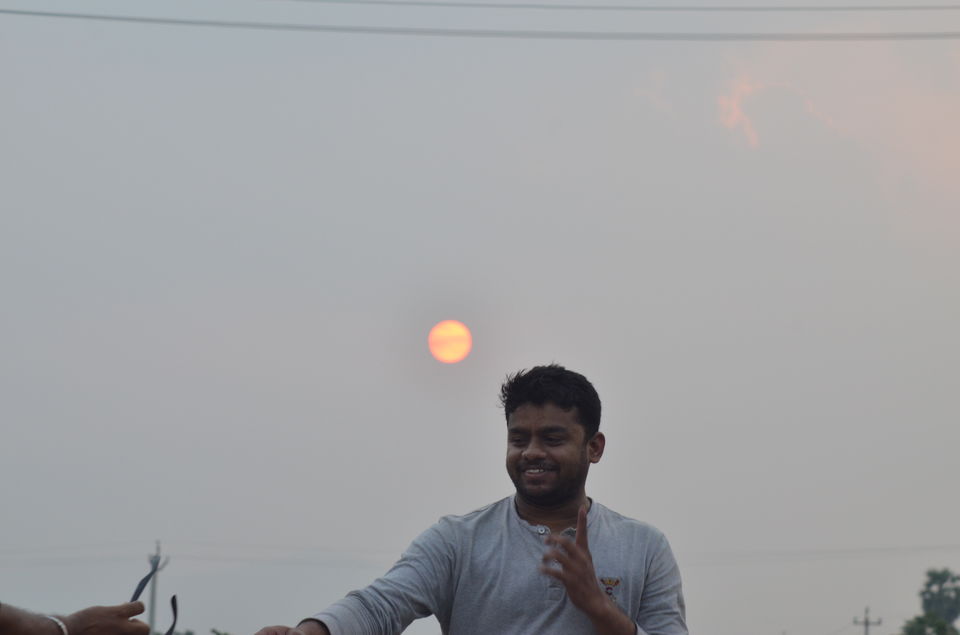 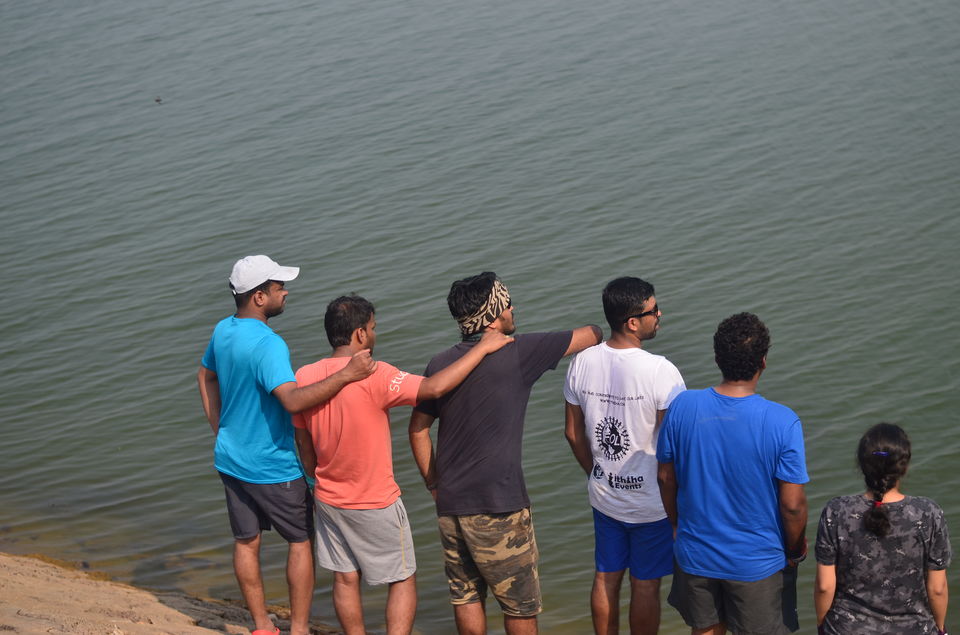 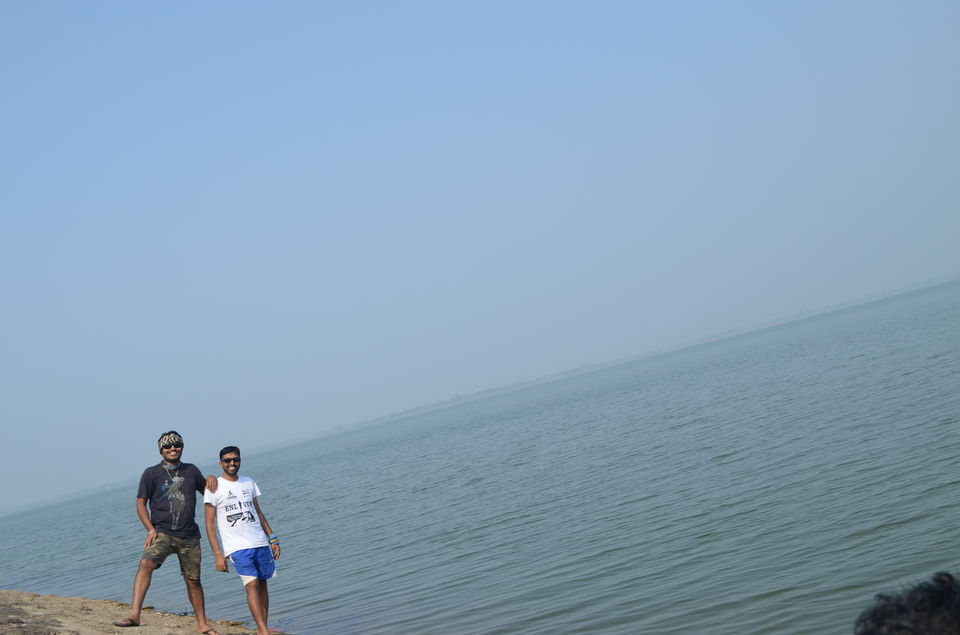 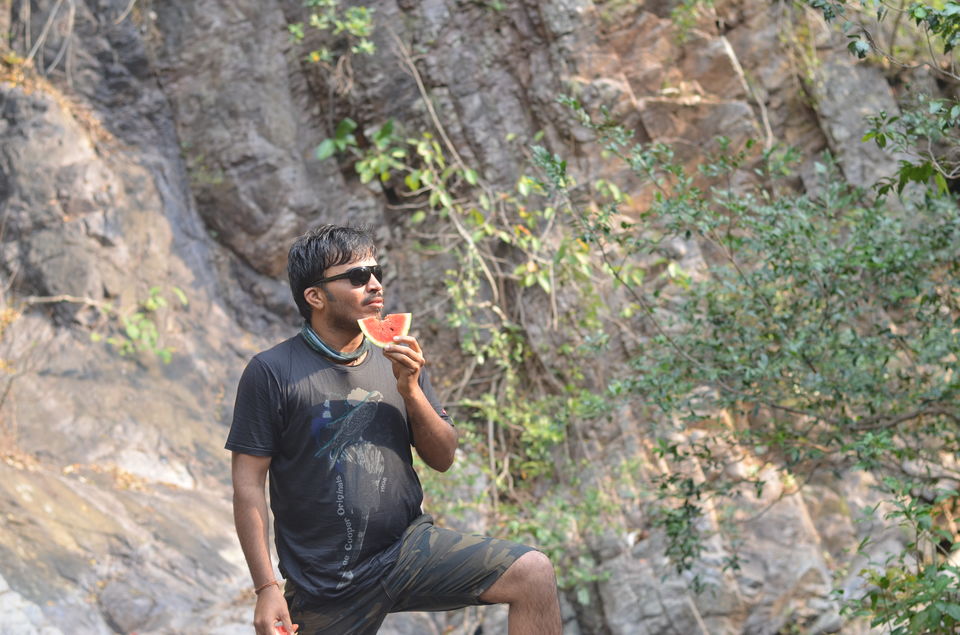 Two most liked things at a time. 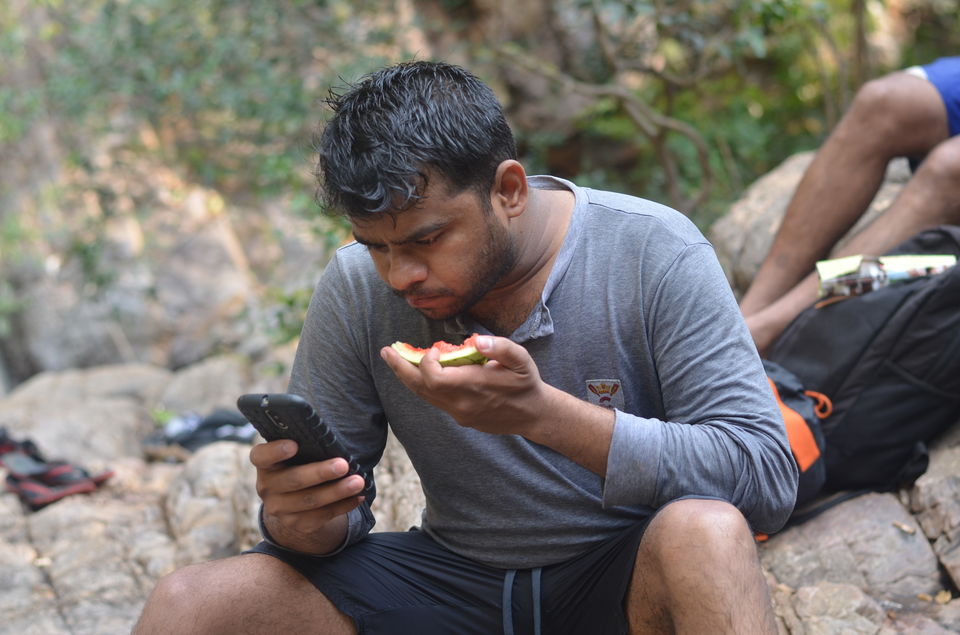 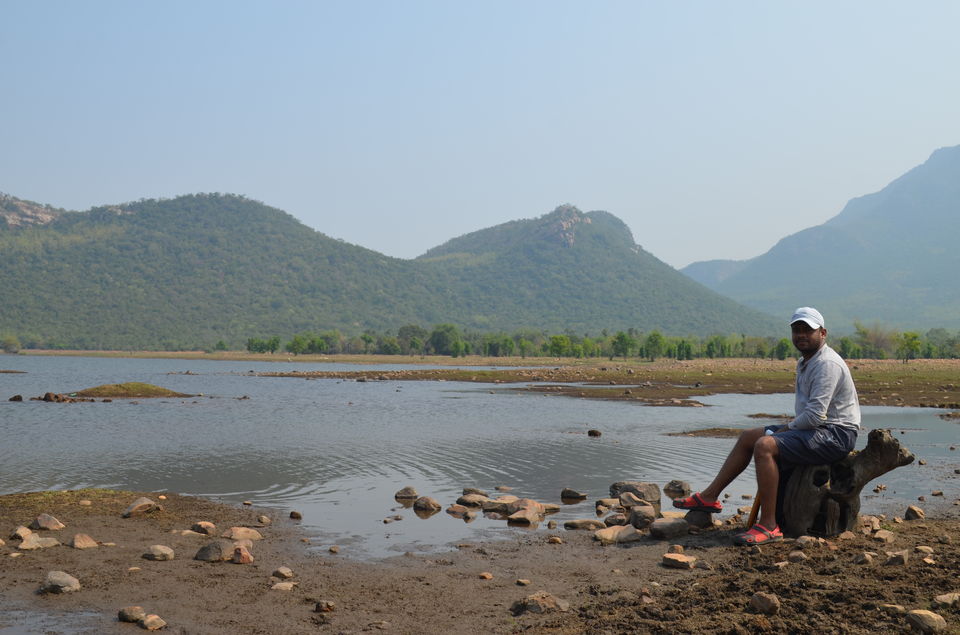 No idea what i was explaining. 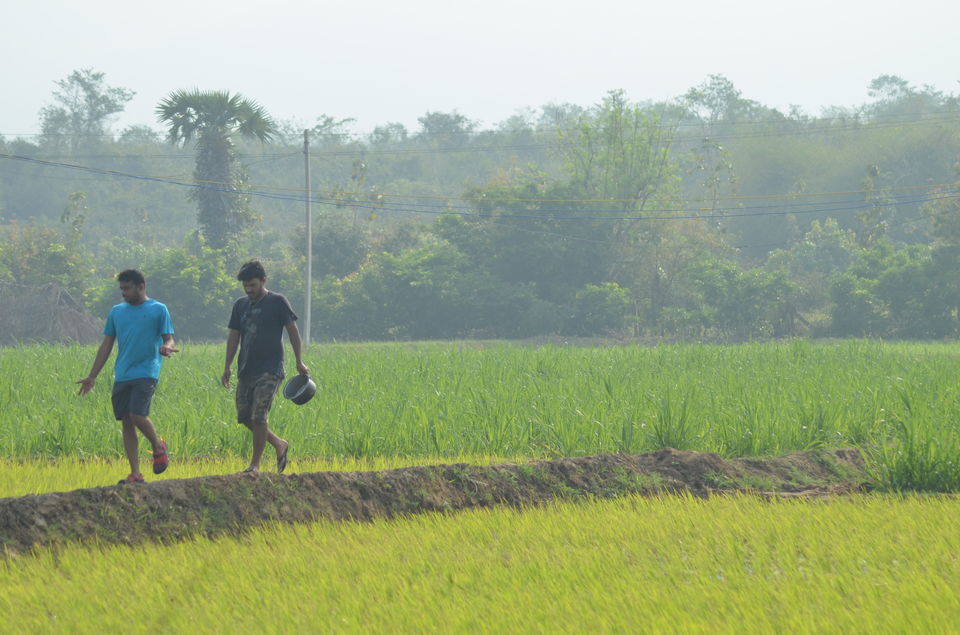 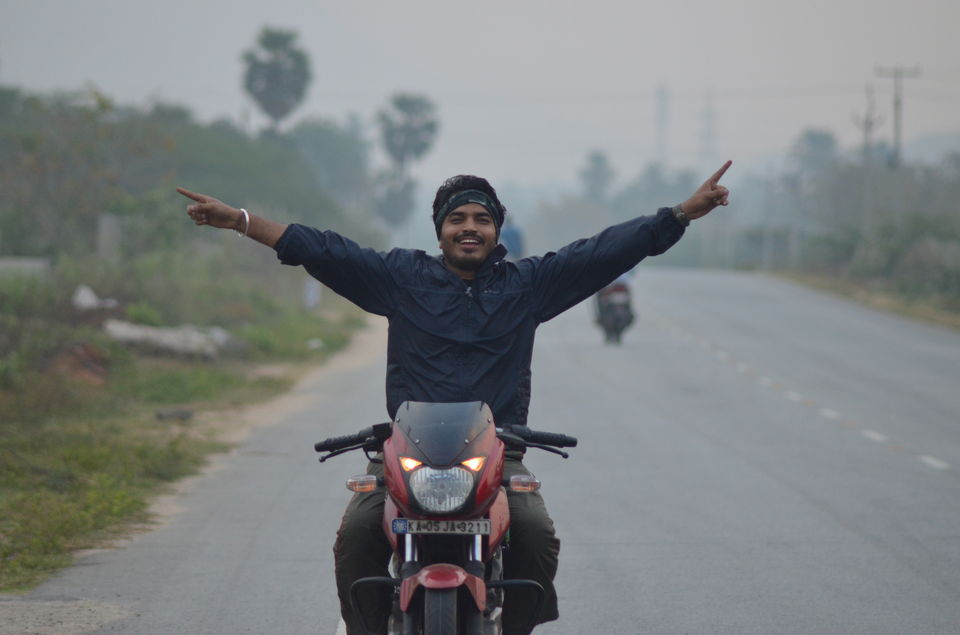 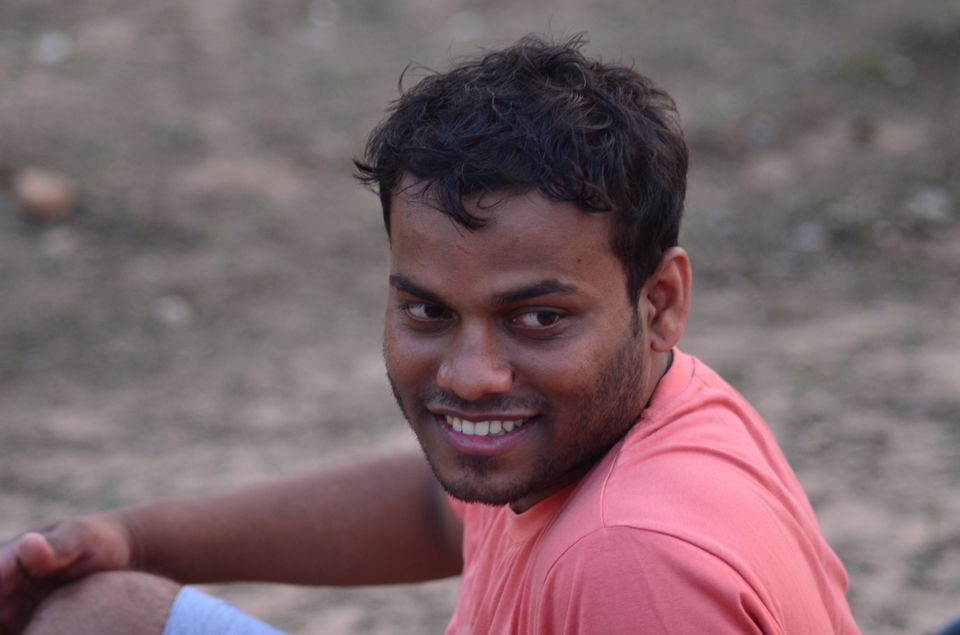 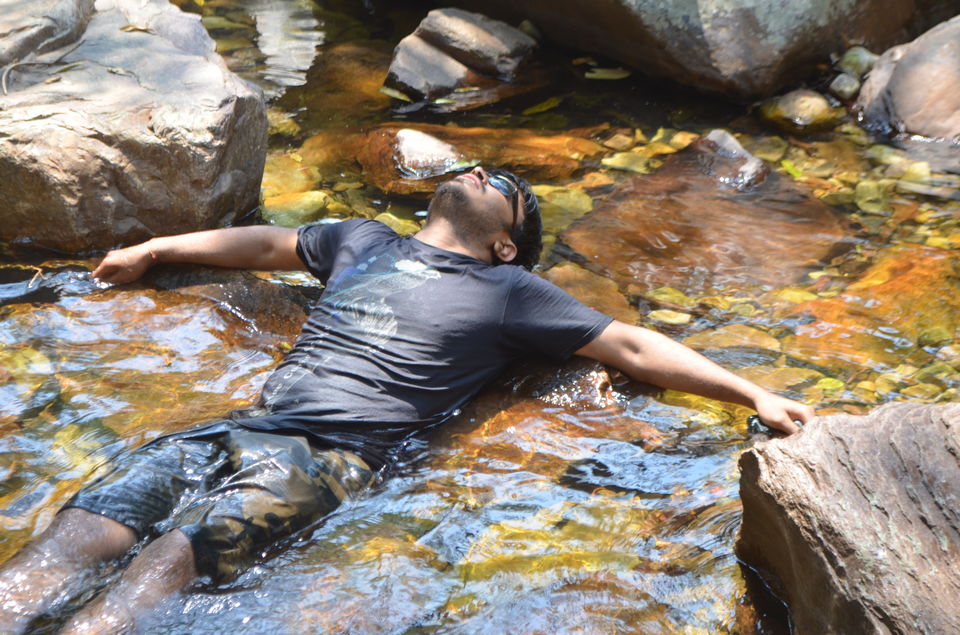 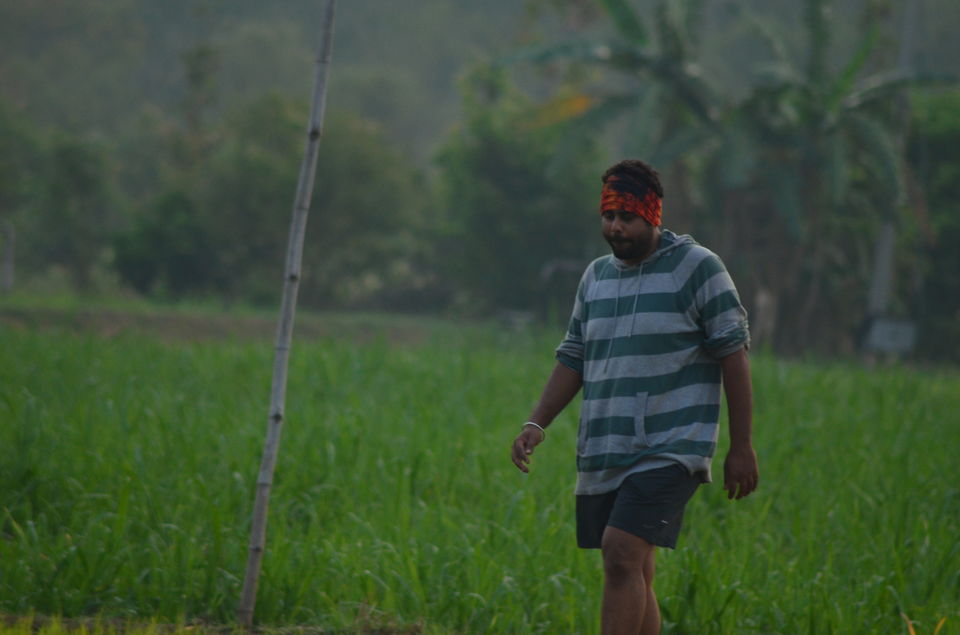 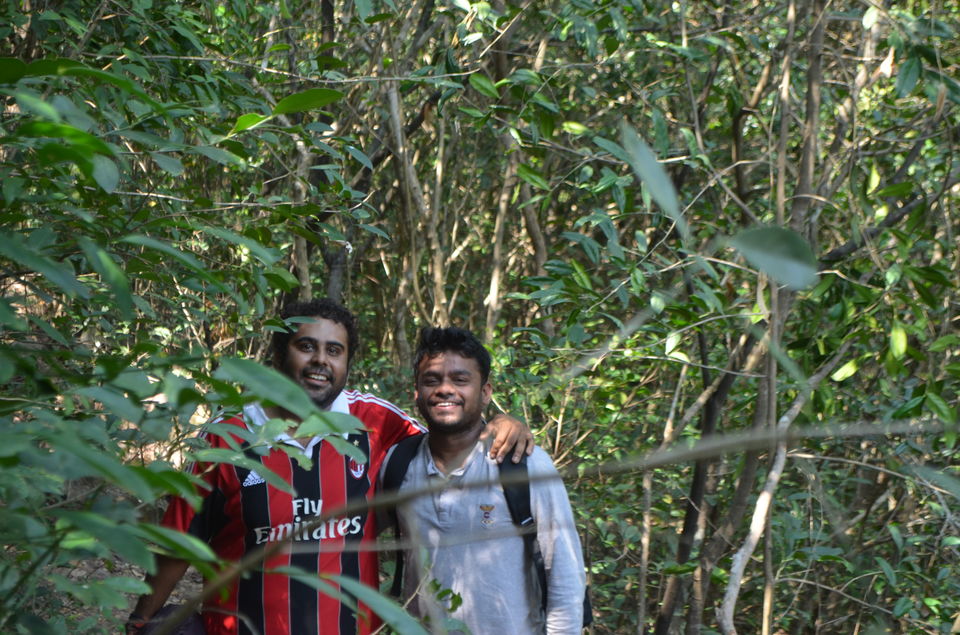 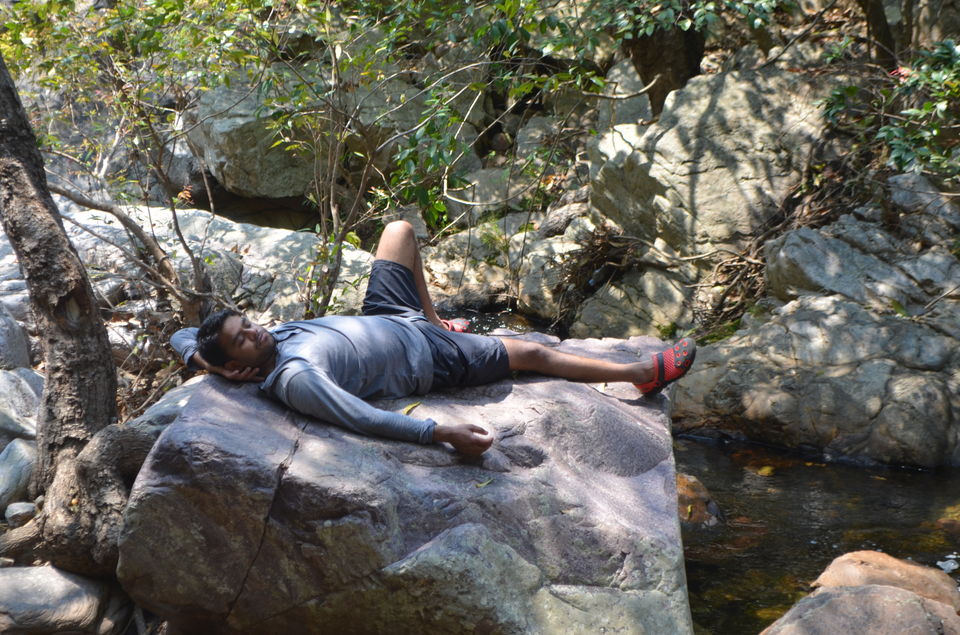 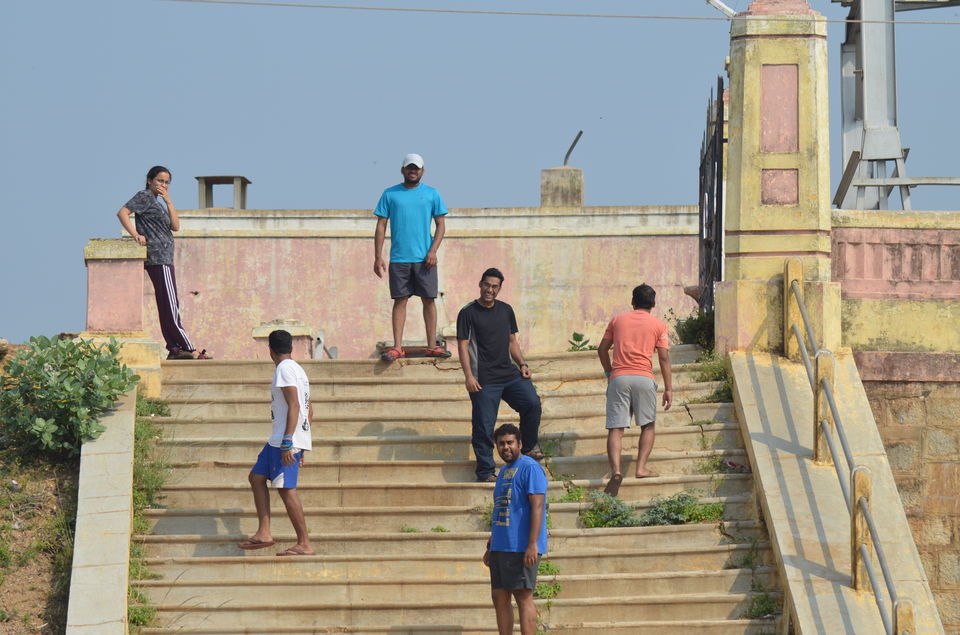 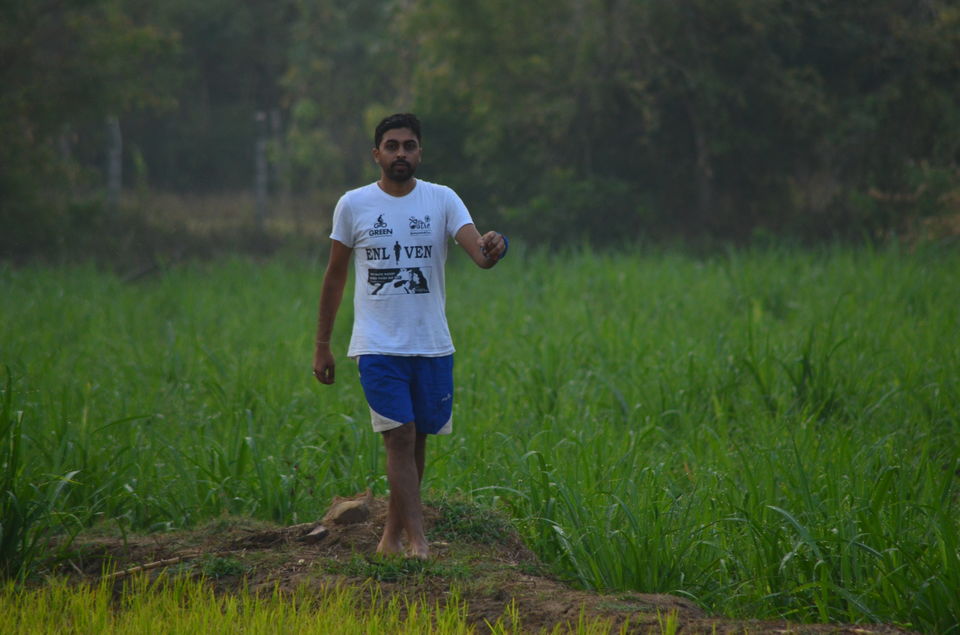 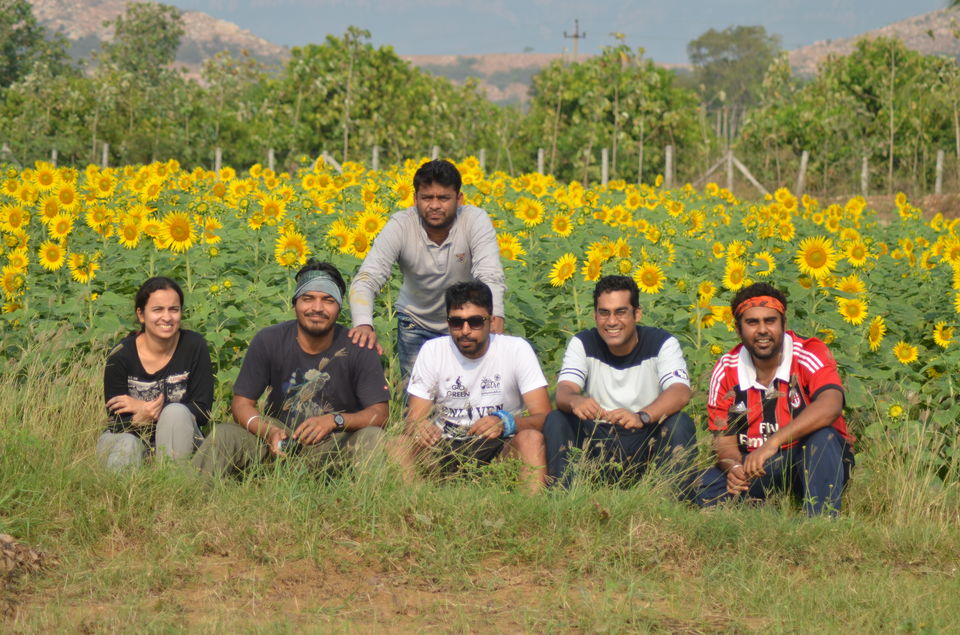 Having fun at one of the pool on the way. 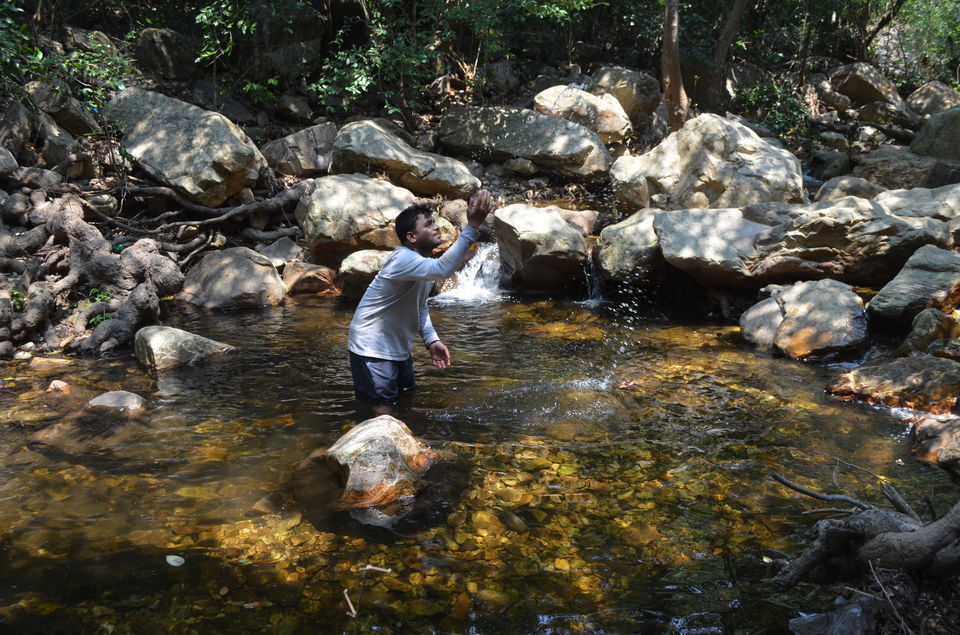 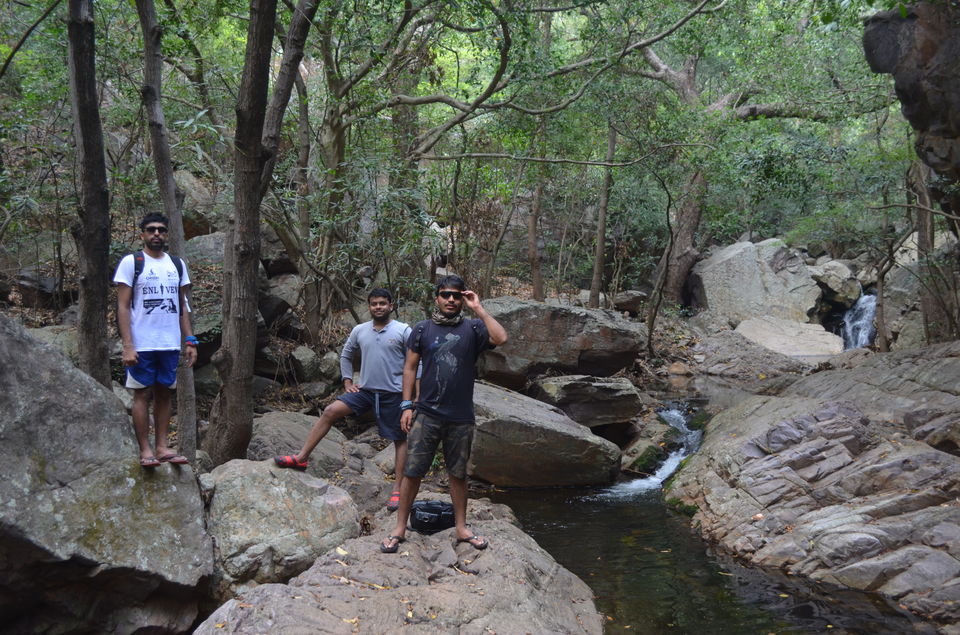 Rest time under a big tree. 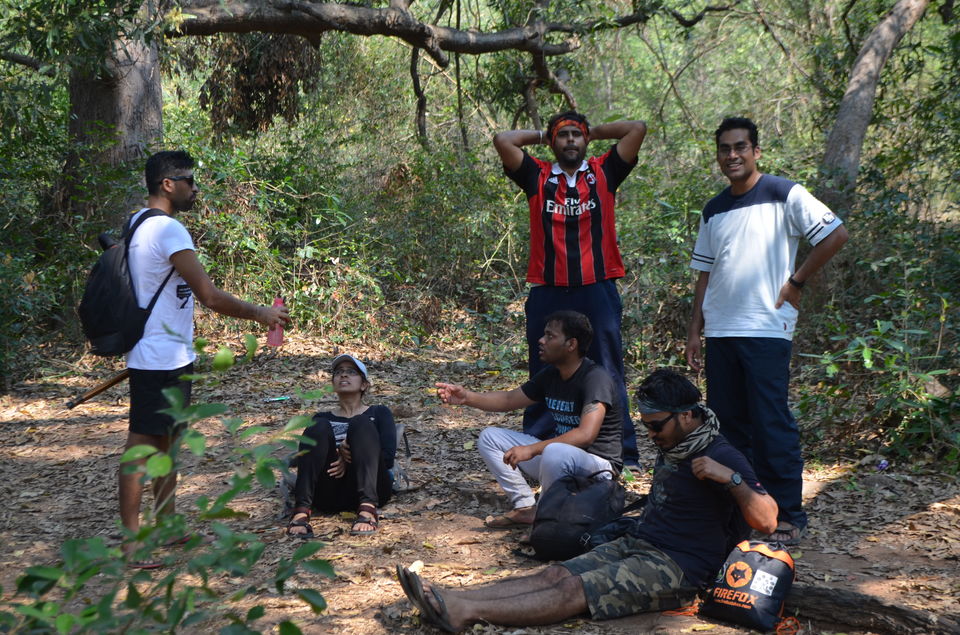 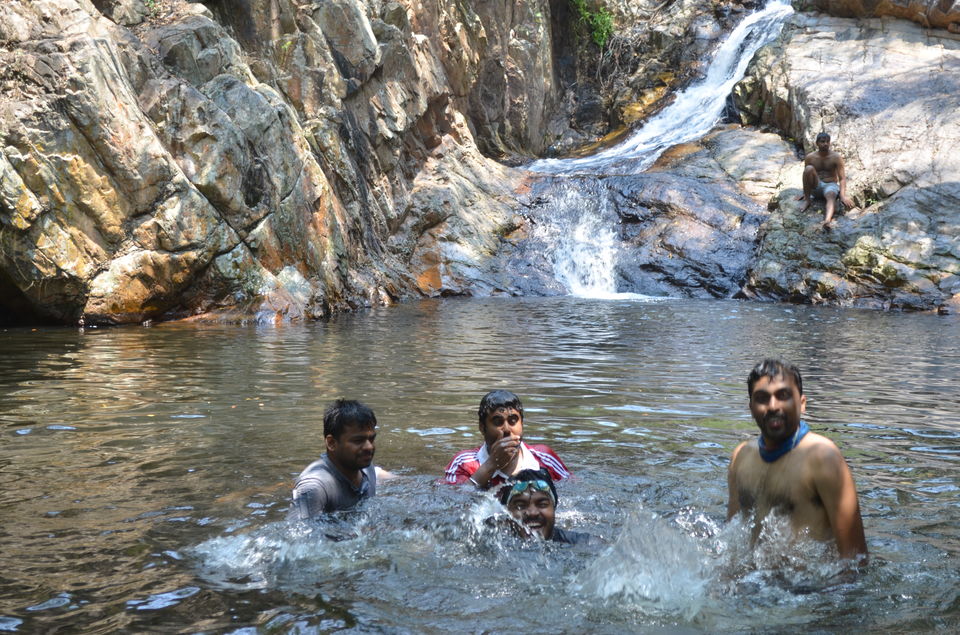 In between 2nd and 3rd pool. 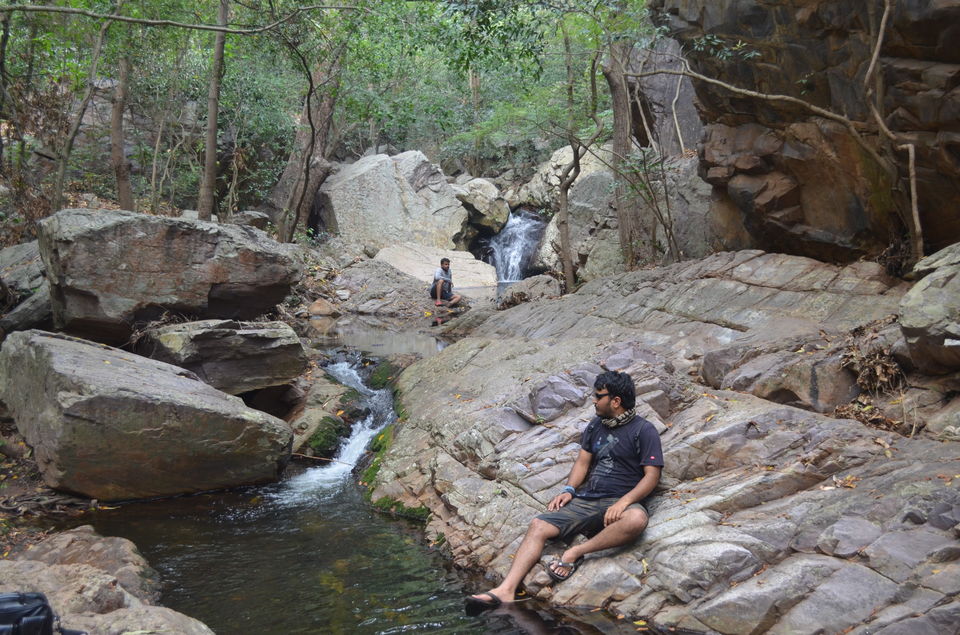 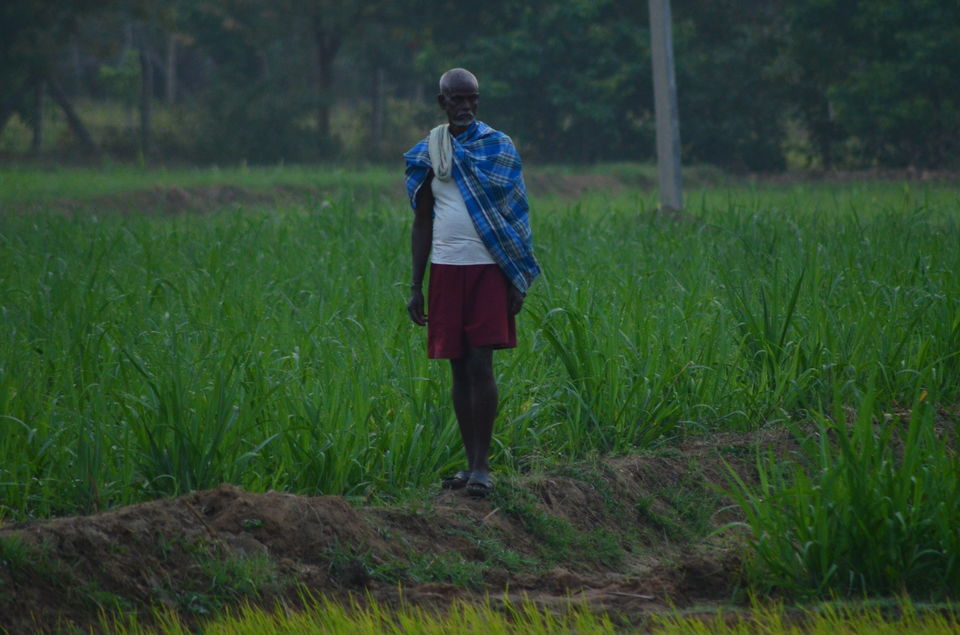 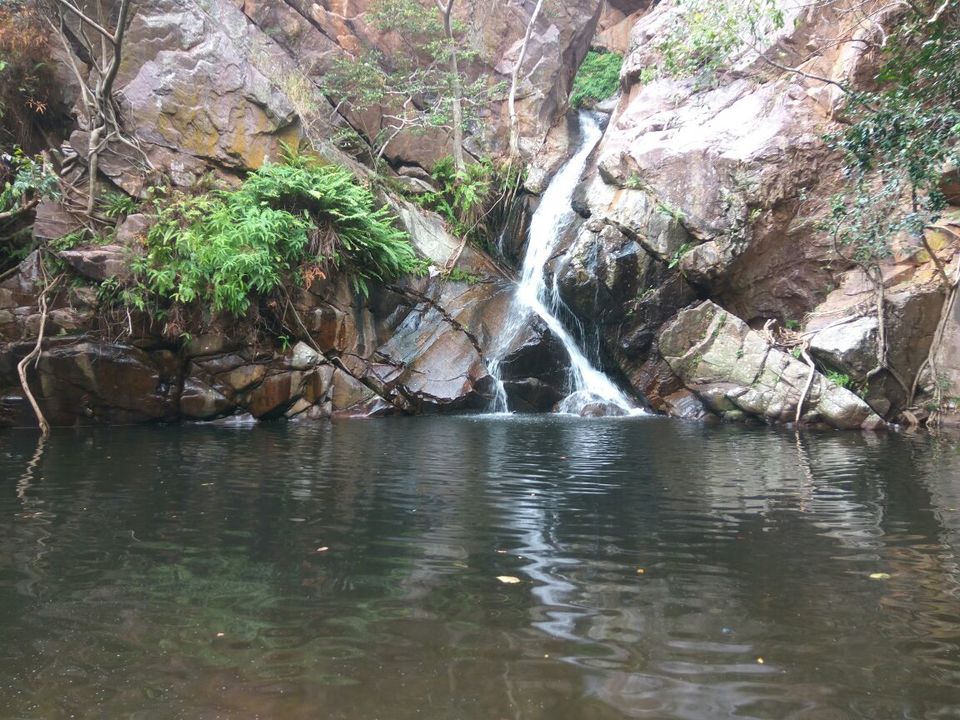 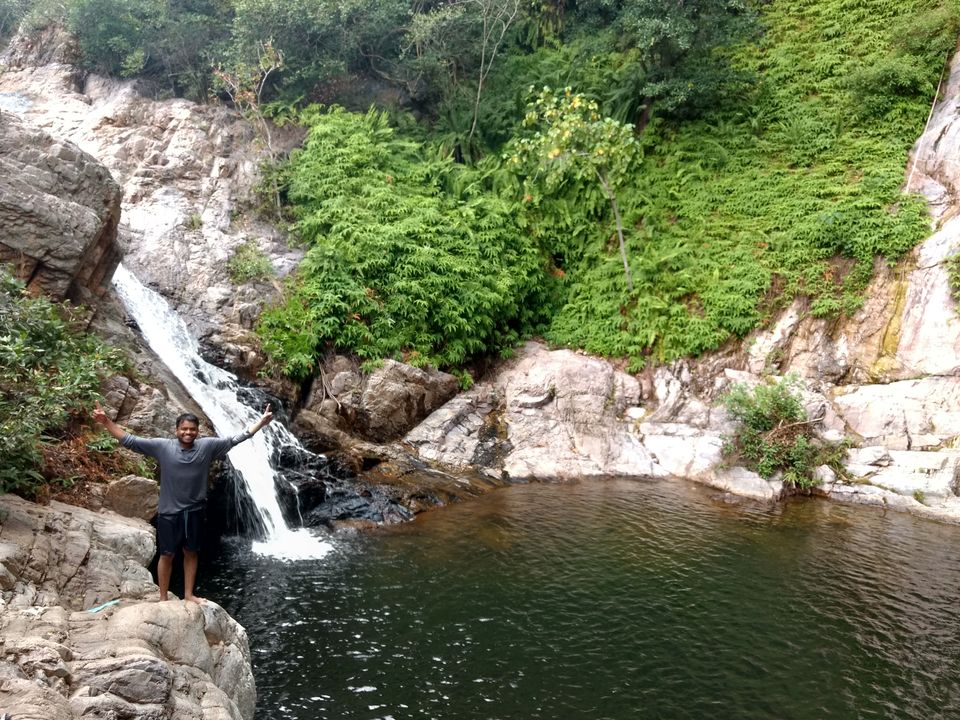 I feel going to a trek will actually get strength to give yourself that much required break and mostly tolerance. Walking in quietness on that highland you will feel like you are able to map your life easily.

Before starting the story let me describe Nagala in detail, popularly known as swimmers glory situated right in the foothills of Eastern Ghats just 80 kms away from prominent temple town ‘Tirupathi’. Nagala blessed with some of the best water sources and the canopy of the greenery all through the year. Well-known for its natural good looks along with the remarkably stunning and crystal clear water fonts. Unlike other trails trekking Nagala (Western and Eastern) falls run parallel to streams and intermittently walking on the stream rocks itself make a trail and you could see number of water pools alongside. Most of the trekkers and holidaymakers use the Nagala western and eastern entries while few dare to take other trails to venture into this pristine water pool paradise. Nagala offers a boundless opportunity to do TREKNIC.

Nagalapuram hills are spread across 25113 acres (101 Sq. Kms approx.) of land. Nagalapuram is a small historical town located in the Chittoor District of Andhra Pradesh. Nagalapuram is famous for two things, one is Sri Vedanarayana Swamy Temple and the other one is Nagalapuram falls trekking (also known as Kona Falls or A.k.A Saddhi Koodu Madugu). Sri Vedanarayana temple is majestic stupa dedicated to Lord Vishnu and is said to have been built by Krishna Devaraya of Vijayanagar Kingdom in memorial of his mother Nagala Devi, after whom the town is termed. Nagala trek starts from a village called Arai at a distance of 16 km from Nagalapuram town, 44 km from Puttur, 87 km from Chennai, 78 km from Tirupathi, 107 km from Chittoor, 130 km from Vellore, 120 km from Kanipakam & 288 km from Bangalore. Public bus service is available till Arai (Pichatur - SriKalahasti road).Nagalapuram since the past few years has turn out to be a favorite trek destination for trekking buffs because of its vicinity, clean water pools and pleasant surroundings. Nagala is one of the popular spots for hiking close to Chennai and also among best weekend breakouts.

This time we were seven people Shiva, Shivu, Vasu, Rashmi and Brothers (Harsha and Bharath Bharadwaj) planned a trek on the weekend of March 18th and 19th. Raced off our journey at 12’o clock in one car and one motor bike on the verge of fully raged autumn.

Had almost no sleep throughout the journey, after a hard long bike(Shiva n Me) ride we had reach a town called Puttur on our way to Nagala with couple of breaks in between and soon finished our breakfast with yummy idlies at small hotel.

To start the trail one has to to reach the Arai village, take right direction towards Kona falls (Sadhi Madugu falls) or look for the route which leads to Nagala Lake, a man made reservoir across the Nagala stream. We reached at lake (Arai Village) early in the morning (10 AM) & got a parking spot near the lake. Our initial plan was to camp during the night at one of the pool. Later we got to know that a techie from Chennai drowned (It’s a long story) while trekking in the Nagalapuram three days back. They have flushed out the body after long search with the help of Arai village folks a day before. Hence we told by authorized guides of Nagala that we can’t camp overnight anywhere in forest, lake and close to the village as per local police department orders they received. So we have decided to come back to village before sunset.

By the time we started trekking it was about 11’o clock, within a 10 min walk we came to the Nagala reservoir backwaters and Eastern Ghats right behind the backwaters. Ideal and safe time to start if you plan to ascend on the same day would be on or before 10 AM, not later. If you plan to stay back (such as usually done) – feel comfortable to start any time till before 4’o clock. Ascend and descend is post 6 pm is unsafe which may leads to missing the right path.

From reservoir backwaters we entered flowering shrub filled plantation with several trails going all possible ways. I guess all these trails leads to our destination, anyhow with the help of our guide Shivu Murthy we finally enter the dense forest in right time in scorching heat. As soon as we enter into thick jungle took a break under a big tree and had watermelon carrying with us. After few mins walk we come across a lovely stream filled with crystal clear water, you know water was as unsoiled as you get in wilderness.

We made it to the first pool (Slide Pool) in the span of one hour with hardly one break. The trail was not so difficult in patches though if you follow the streams there are few chances to you may get lost. The first pool place is very scenic but you will hardly get a space to enjoy the scenery because loose and slippery stones. One has to keep an eye on your step and walk carefully. The pool is about 6+ feet deep and a perfect spot to soak yourself without panic of drowning but one should be cautious. The crystal clear water and outright peace will take your breath away. The loveliness of this stream is one can enjoy natural fish spa(Fish entertains a bit if you give some time) throughout the trail starting from stream we cross after the forest cover till you reach the third and last pool. The whole group had an amazing time by jumping into the water - non-swimmers with their floats and having appetizing lunch with Chapathi and spicy chutney at the slide pool.

After a short while we decided to move on to the second pool, further up the hill. The first and second pools were a pleasure for both swimmers and non-swimmers, distance between these two are around 0.5 km. Slightly deeper (Depth of the pool varies from 1 feet to 10 feet) than the first pool with a small water fall at the end, and it was even better than first pool. After clicking a few snaps here we have decided to move advance as there are many folks sat on the cliffs clicking snaps of the divers plunging into the water and filling their lost energy by having lunch.

The stretch between second and third pool rather steep, I must say that I was out of control by the time we reach it. The pristine water, the leaf covered hill side, the overgrown rocks, the vibrant leaves floating in the pool, the greenery around, all added to one of the most picturesque sights I have seen. The water here is the deeper than the previous two pools and that was quite obvious since it was much darker in color than pool one and two. Shiva, Vasu and myself decided to dive into the water from surrounding rocks high above the pool. Others (Harsha, Bharath, Shivu and Rashmi) sat on the cliffs clicking snaps of us when plunging into the water. Vasu and others said it is no less than 20-30ft deep. Please be careful and don’t attempt to get into this on the off chance that you know swimming or concerned of deep water. Beyond this pools the ascent gets difficult, until and unless you are a professional trekker or someone experienced with you. Kindly refrain from going above at this point.

We covered entire trail in approximately 5 to 6 hours which incorporated the incredible time spent in the first and third pool. Once we reach back to the pool two, we got into the water once again, took more pictures and began trekking back to the downhill. The trek back downhill was thoroughly pleasurable but also little draining since we were all worn out from the swimming and no sleep in the last night. We descended and reached the Arai village in less than two hours. With villager’s permission Vasu, Shivu Harsha and Shiva somehow managed to prepare soup and dinner for us in guide’s house. After whole day ascending and descending dinner Avalakki seemed like bliss, was so delicious and pleasing, all of us relished it.

We pitched campsite near the temple at Pichatur in the dark night with our torch and sleeping bags. In no time everyone went to deep sleep (I am the one who started first, in the morning I told by Harsha). We got up early in the morning and started towards Puttur. Eventually as breakfast time approached we stopped near a farming land, took permission from land lord to use for our needs. Shivu, Harsha collected the wood and on a small fire Rashmi,Vasu and Shiva prepared tea and tasty Upma to feed all the ‘Hungry’ birds. After our ‘firewood’ Upma we have decided to go Araniyar dam site since we had lot of time in the day. Spent some odd time on the retaining walls of reservoir took some pictures and packed our stuff and started towards Bangalore.

On our way back to Bangalore there was sizzling sun, a hot day, we were badly looked for a water source to dip in. Vasu and Shiva both were riding on a bike and they found lush green paddy fields where there is pump which helped us to refresh ourselves.

Overall a fulfilled trip, It would take another weekend to venture other side of Nagala (Called Eastern entry) and there will be one more trip to this pristine water pools.

• Water Source – First 2 kms there is no drinking water source until you cross the stream on the way (1 lts water would be sufficient till here).

• Camping Options - Either at second or third pool or near reservoir backwaters.