Turning back from Chang La (Chang Pass), halfway to Pangong Lake, was one of the worst moments of my life as a traveller. As our cars turned back, I still remember I was in tears. But Pangong was kind to me. It gave me a second chance.

It was my first trip to Ladakh and I was too inexperienced then to travel alone. So I went with a professional tour organizer. The drive to Chang La (17,586feet) from Leh was one of the most stunning I have experienced in the mountains.

After about an hour of passing through the signature barren moonscape of Ladakh, we crossed the snow line. The sky was overcast and as we kept going higher, the surrounding greyish brown gradually kept turning more and more into white. It started with white dots on brown. By the time we reached the police outpost on way to Chang La, it was brown dots on white.

We got stuck in a queue of cars way ahead of the pass. I got off the car. The road was slushy with melted snow. The slopes and rocks all around had a two–three-foot layer of snow. The road had trailed off into a mass of white. There was no sky. It was all white. That is the only time so far that I have experienced a “whiteout”.

After a long wait, when we finally reached Chang La, we got the bad news. A vehicle had skidded and now stood diagonally blocking the road. Apparently the Army was trying to get it back on track. 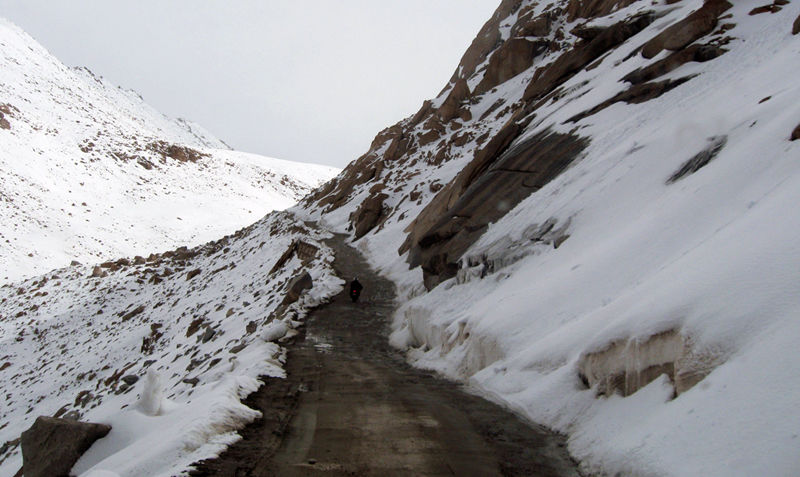 I walked around a little, taking photographs, totally overwhelmed by the landscape and the snowfall. There were a huge number of tourists, frolicking on the snow, hurling snowballs at each other. And then, the drama began.

At the tea stall, I noticed that my roommate was behaving strangely. The elderly woman looked totally disoriented. What she said made no sense. I had read that lack of oxygen to the brain in high altitudes—acute mountain sickness (AMS)—could do that to people. I asked a jawan at once to help me take her to the Army medical camp.

Even as we walked, I could see that she was breathing heavily. At the camp it was total pandemonium. The lone Army doctor was struggling with a huge number of patients who complained of breathlessness. He administered oxygen to my roommate at once. Several others had taken ill, too. All the cars were ordered to turn around.

I thought my Pangong dreams were over. But we had an extra day on the trip, free to do whatever we liked. Four of my teammates and I decided to give Pangong another shot.

This time we passed Changa La without stopping. After all the rush only three days ago, the road was somehow deserted. The weather was clear this time and we passed through some of the most amazing landscapes I am yet to encounter again—huge lakes frozen into massive white sheets, frozen rivers, a chain of snow-capped mountains on the horizon… 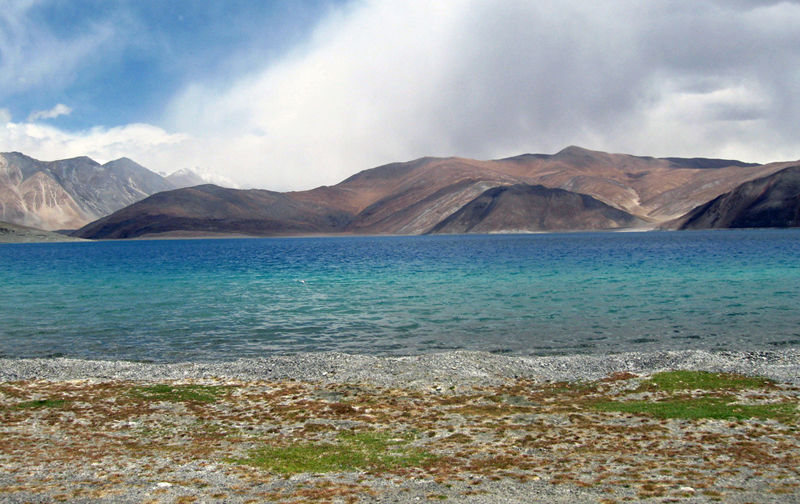 The magic of Ladakh lies in the dramatic change of its landscapes. Within an hour of the snowed-out landscape, we were in the desert of Changthang. The area was teeming with wildlife. Before long, we saw a herd of the famous ‘kiang’, or Tibetan wild ass, a Brahminy duck, and the Himalayan marmot.

The driver took biscuits from one of my teammates and lured a marmot out of its burrow. I was inexperienced then and thought it was a cool idea. I know now that offering food to the marmots is banned and it’s not really a cool thing to do. It destroys their natural instincts to look for food, and often the food offered to them does them harm.

Within half an hour of our encounter with the marmot, we were at Pangong. Made famous by ‘3 Idiots’ now, most travellers are well aware of Pangong’s famous ‘colour changes’. I saw it in at least 3–4 different ‘colour schemes’ in the short time that we spent there.

The first sight, from a height, was with a complete reflection of the mountains in the background. The water looked like a mirror. The second sight, level with the lake, was of two–three different shades of blue in the water. I don’t know if there’s a similar multi-coloured lake in the world.

Another angle produced a uniform sky-blue, with the white brown-headed gulls making for a stunning contrast against the water and the surrounding brown hills. I know some people saw it in a uniform dark blue. Pangong is magical. How you find it is up to your luck.

I had heard that the water of Pangong was saline, and I actually tasted it, though it may not have been a smart thing to do. It’s said that Pangong, like Tso Moriri (‘tso’ is the Tibetan for ‘lake’), another famous name in Ladakh, may be a remnant of the ancient Tethys Sea that was pushed up by the Indian subcontinent to form the Himalayas. That makes these lakes all the more enigmatic.

Two-third of the 134-km-long Pangong Tso, which means ‘high grassland lake’ in Tibetan, falls in Tibet. India enjoys only a third of its beauty. Though we made a day trip, there are arrangements for tent stay near the lake. I would say Pangong—and Ladakh in general—is a must-visit if you are in India. It’s one of a kind.

Chang La (17,586feet) is one of the highest passes in India and the second highest in Ladakh. In the first half of June, the snow can make it resemble a fairyland

I don’t know if there’s a similar 'multi-coloured' lake in the world. It actually changes colour depending on the angle, the weather and the time of day. Sometimes even multiples layers of colour can be seen in the water, as we were lucky to see. The gulls only add to its beauty. It’s said that Pangong, like Tso Moriri, may be a remnant of the ancient Tethys Sea that was pushed up by the Indian subcontinent to form the Himalayas. That makes it all the more enigmatic.
SPONSORED
Want to book a similar trip?
I accept the Terms of Use and Privacy Policy of Tripoto.
SPONSORED
Related to this article
Weekend Getaways from Changla,Places to Stay in Changla,Places to Visit in Changla,Things to Do in Changla,Changla Travel Guide,Things to Do in India,Places to Stay in India,Places to Visit in India,India Travel Guide,Weekend Getaways from Himalayas,Places to Stay in Himalayas,Places to Visit in Himalayas,Things to Do in Himalayas,Himalayas Travel Guide,
Tagged:
#Pangong Tso#Chang La#Changla#Ladakh#Himalayan Marmot#Pangong Lake#India#Himalayas#nature#road trip#adventure