A walk through the ghost town - Dhanushkodi

A boat moored to the shore. I captured this view when I was approaching the last 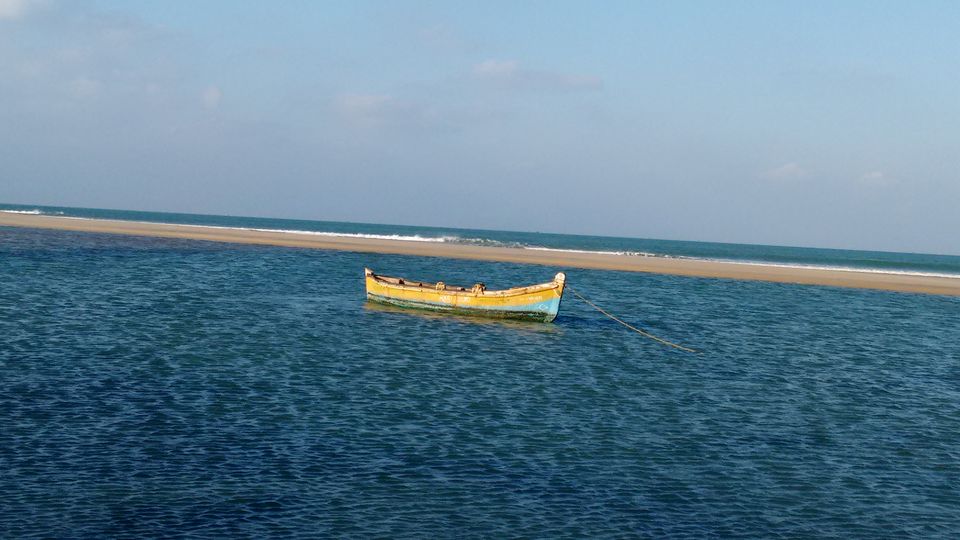 I had a tea before starting my walk. You can see the fishermen who got down from 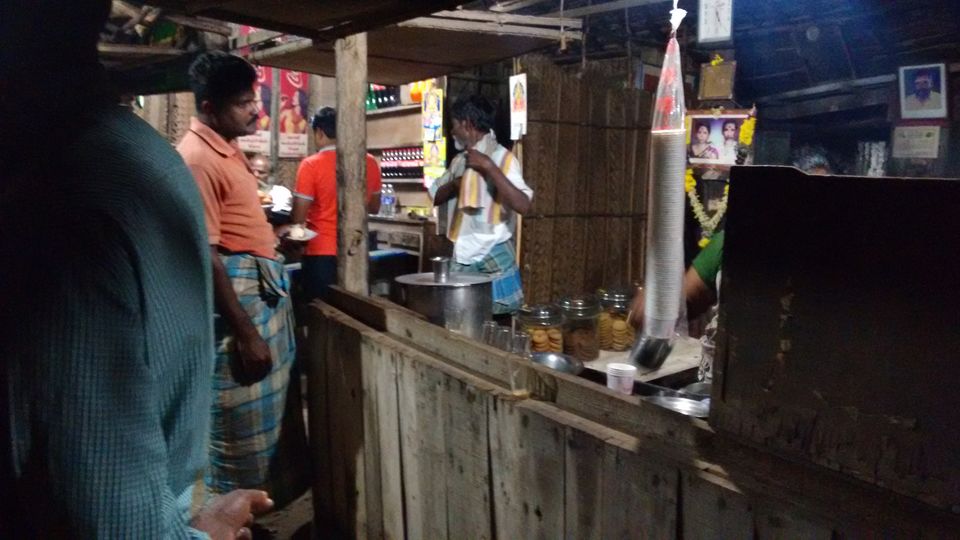 I managed a selfie in the dark as I entered the mouth of the island. 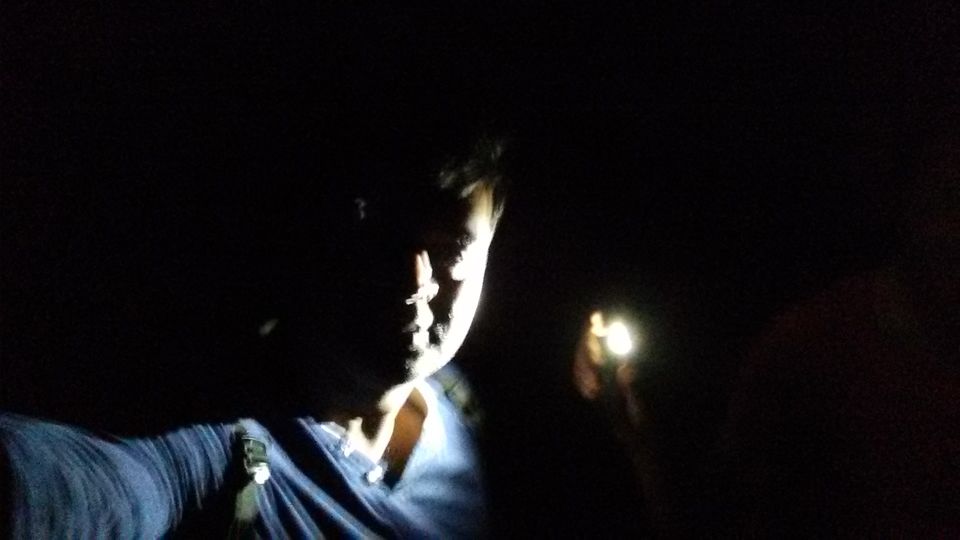 After a walk of an hour or so, this view brought smile on my face. It was the br 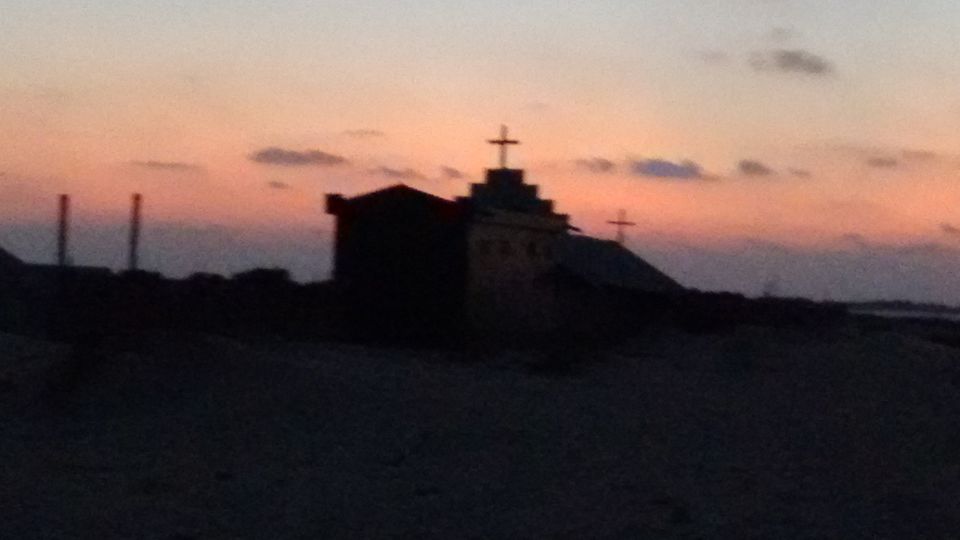 I sprinted for about half a mile to capture this beautiful sunrise. 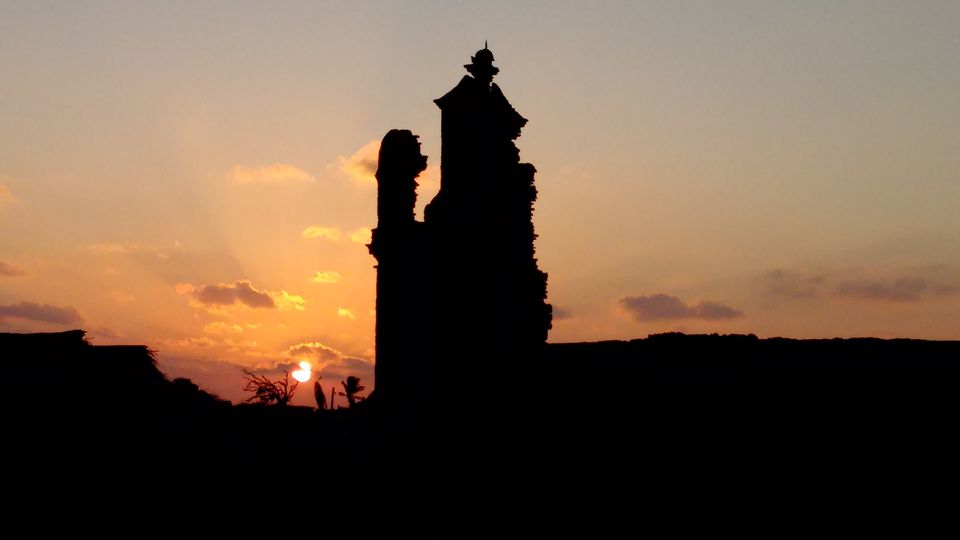 And finally I reached the tip. My ecstasy is well expressed in the image. 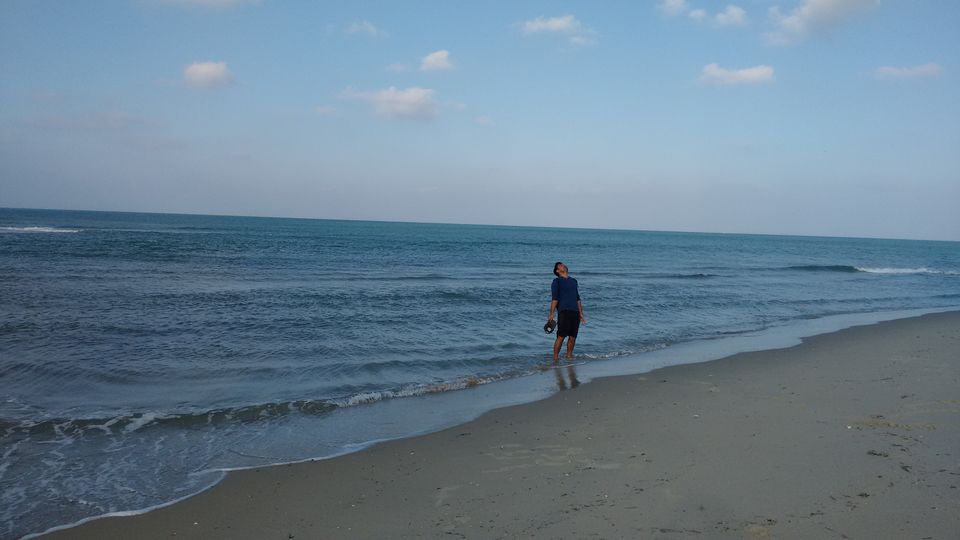 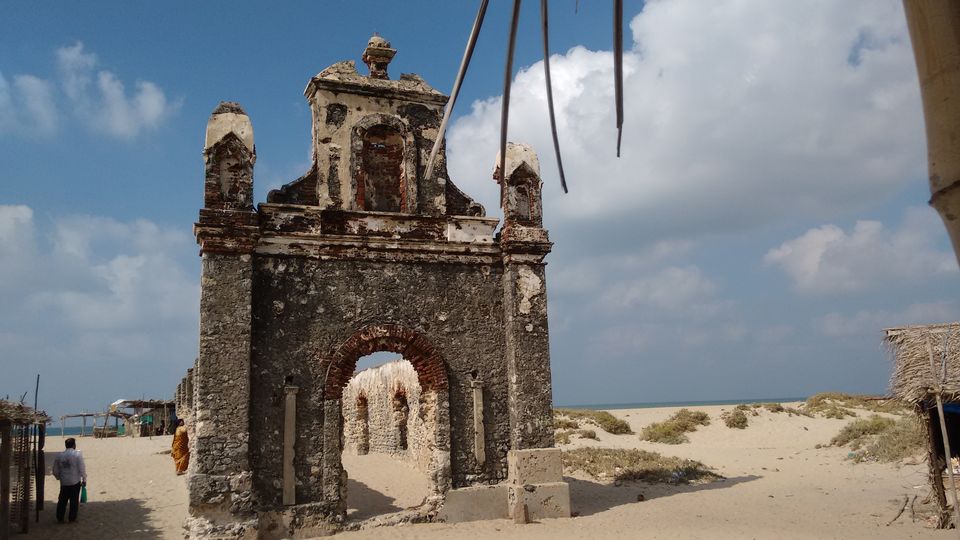 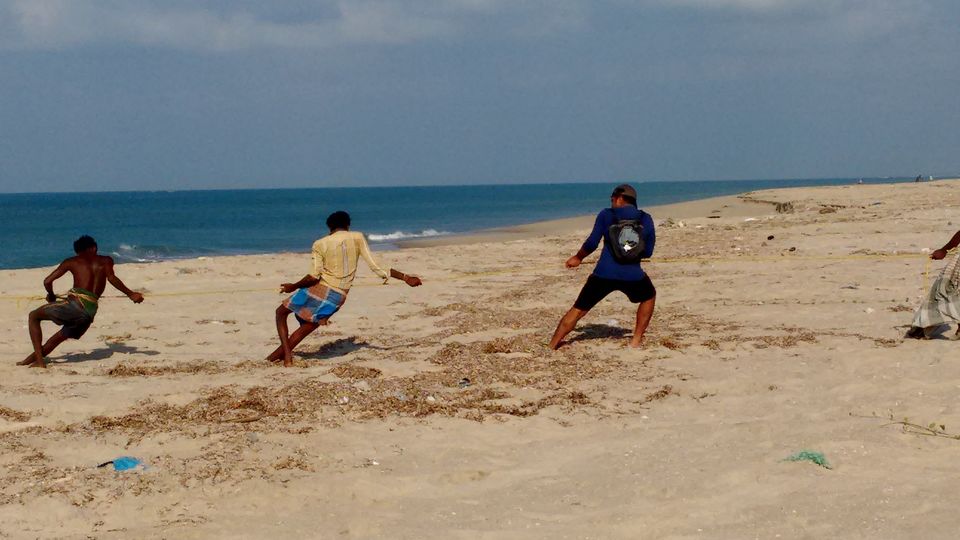 Ever since I have heard of Dhanushkodi, it was my wish to visit the place in its raw state. There has been a lot written about the place. And why not, when the place has undergone the brutalities of the nature not once but twice and that too of cosmic magnitude. Above all when the place possesses religious significance it is bound to draw attention of people at large and Indians in particular. No wonder the place serves a muse for travel bloggers across the world.  Even I was charmed by its mystical history. Probably there were few weird reasons as why the place interested me more than anybody.

Firstly, when I got to know about the geographical shape of the place, I felt inquisitive to visit it. Dhanushkodi is a very narrow stretch of land which extends up to 10 kms in length. Its width varies from half to one kilometer. I wonder how careful a cartographer should be while drawing a map for this part of the country. The place is flanked by Bay of Bengal on one side and Indian Ocean on the other. Secondly I was curious to see the ruins of the small town which flourished before it was washed away by a demonic cyclone of 1964.

Thirdly, being mythology enthusiast it came natural to me to go and experience the place. Let me tell you that I am a daydreamer and a firm believer in the concept of time machine, so if you take me to Tibet, I can very well start experiencing myself in the shoes of Heinrich Harrer and may even start making strategies to defend the country from Chinese invasion. So Dhanushkodi which boasts of such a rich mythological connection was bound to attract me. The place possesses a mythological significance since the days of Ramayana. As per legends, in Sita’s Swayambar, Ram was the only king who lifted the extremely famed bow Pinaka of Shiva. Not only did he lift the bow, he broke it into three parts. The first two parts fell on Bhuloka and Patalloka while the third one that flew in the air fell in Dhanushkodi. It is believed that after Ravana was killed, Vibhishan was coroneted as the new king of Asuras and on Vibhishan’s request; Ram broke Rama Sethu with one end of his bow. The place derives its name from this incident, where Dhanush refers to bow and kodi refers to end.

Last but not the least I was pained to know about the human loss the place has suffered at the hands of natural disasters of 1964. The whole island was washed away by a cyclone. The cyclone hit the place at night. I wanted to feel the lull before the monstrous cyclone hit the land. I wanted to feel the last peaceful night that the people of the place had lived before they were washed away by nature’s fury. I wanted to know what a regular day looked like in the life of fishermen; the people who constitute a majority of the population who presently inhabit the land in makeshift huts to carry out their livelihood activities.

With so many wishes to fulfill, so many curiosities to quench and so many feelings to experience I had to plan my trip in a little different way. So I decided to walk the whole stretch during night time and reach the tip of Dhanushkodi at the break of the dawn. The plan looked good on paper but when I shared my little ambitious plan with friends, they gave me number of reasons not to visit the place in the night. Any sane individual would avoid going there in night, leave alone walking the whole stretch. I reached Rameswaram a day before and visited Ramanathswamy temple and Pamban Bridge. I would refrain to elaborate more on these visits as they deserve a separate write up. In the mean time I inquired with the local people about the conveyance available from the city to reach Dhanushkodi at night and I also gave them a little hint about the plan, none of them encouraged me. Few told that the land is heavily guarded at the entrance, few scared me of wild dogs on the beach, and the inherent fear of ocean taking a violent shape at night was always there in me. In spite of all that I wanted to go and experience every bit of it. Rameswaram being a small city, I could not expect a mode of transport in the night. I inquired for rented bikes as well but the result was negative everywhere.

Luckily I got to know about a special bus at around 4 in the morning which took fishermen to the island. I boarded the bus from the city.  I was looking alien in the bus with all my co-travelers being fishermen. Within half an hour we reached the entrance of the place. There was a small tea shop. Fisherman used to have tea, relax and then go for their usual work. I also had tea. Immediately after that shop the actual entrance started. I dared to go little ahead of the shop. As soon as I started to move away from the shop, it started becoming darker. There were no Street lights and on top of that it was the second day after Amavasya, so the question of natural light of moon was also ruled out. I had a small torch to guide me through my way. As I walked the next half a mile, I could hear the roaring Indian Ocean waves on my right and there comes the first Goosebumps. It looked as if the ocean was hiding a monster inside which may come up anytime. It made me rethink my decision to go ahead, but somehow I mustered courage to move forward, oblivious of how the path ahead would be. I kept walking along the shore keeping a safe distance from it. For the next one hour or so, a lot of things went through my mind. It was more of a bittersweet feeling, probably because of the darkness. Gradually I started enjoying the whole experience. After a walk of around one and half hour, I could see the horizon picking cherry color. It brought joy on my face. The sun was around. For the first time I loved Sun so much and this sense of liking was more emphatic in nature. I was walking barefoot and unknowingly jumped on jagged seashell. I thought something bit me. It was paining but got some relief when I saw that it was just a seashell. Suddenly I realized sun was coming up. I could see silhouette of a church and a red ball of fire in the backdrop. The sight was out of the world. I sprinted for next half a mile just to capture that view. After clicking few shots I waited, took breathe and enjoyed the sun rising up in the sky in its full glory. The feeling was beautiful. I headed on my way with more excitement and expectations. The Indian Ocean with which I was scared of till now had become more familiar and friendlier. More often I got splashed by the diagonal waves. The gust of wind hit me more forcefully than before. The clouds scudded their way along with the wind. As I kept walking along the shore I could see baby crabs scuttling back to sea as and when I encroached their territory. On the way I crossed few makeshift huts of fishermen. After walking for an hour, as I realized I was nearing the tip; the water in the Indian Ocean was becoming more profound in color. Wherever the width of the stretch was less, I could peek onto the turquoise waters of Bay of Bengal on my left. As I approached the tip of the land, I had a feeling that something heavenly is in store for me. Before stepping my foot on the last island which was separated by the mainland by very small stream of water, I could see bevy of white colored birds basking in the sun. They looked like Dove but much larger in size. I had never seen them before. They blew me away with their beauty. I could see the jade green water getting mixed and lost in the blue one. The clouds had parted making a ring shaped space. The sun rays made their way through the gap onto the ocean giving a resplendent view of the water body. It seemed as if I had landed on a lonely planet and the nature had unleashed all its beauty at the same place. There was a moment between I and the nature where we said a lot with no words. I gave myself sometime to sink in the beauty which I had witnessed. And I just wished, May the beauty remained untouched for times to come. The beauty was worth all the pain. With joyous heart I decided to walk all the way back. Now walking back seemed cakewalk for me although it was a hotter day.

On the way back I visited the remains of church, railway station and post office. Every remains had a story to tell. It is said that the waves reached a height of 7 meters on the day of cyclone. Probably that ominous night, the existence of the place was removed from Indian mainland as the whole place was under water. On the way back I got the chance to help few fishermen in pulling the net off the ocean. The kind of hard work fishermen fraternity does made me believe that they are unsung heroes of the country. I realized there is something to learn from each one in the crowd. This was my experience and this was something which I will cherish all my life. But I must urge you to visit the place, to experience the story the place has to say. I am sure everyone will have a unique experience and story to tell. Visit the place and make a story.