Road trip to Dhanushkodi: The ghost town of Rameshwaram

One can only imagine Rameshwaram as a religious place, with its significance in the Hindu pilgrimage of "Char-dham yatra". But, this place has a lot more to offer apart from pilgrimage. One of the worlds' shallowest coastline bordering Bay of Bengal on one side and The Indian Ocean on other. It has some of the most amazing beaches where one can just enjoy solitude and be on their own.

What could be a greater inspiration for a road-trip! So, we blocked our calendars and let loose the throttle of our bikes ;-)

We six friends started from Bangalore around 3:30 AM, as we find it the most useful hour for all the trips. The roads connecting Rameshwaram to Bangalore is pretty decent, a well maintained AH 43 which goes through Hosur, Salem, Namakkal, Karur till all the way to Madurai. We were going at a good pace when one of our bikes broke down just 20 KMs away from Madurai. We had to tow it to the city of Maduari to get it fixed, before we could start for Rameshwaram.

It was late in the night, when we were crossing the historic Pamban bridge built over the Pamban channel of the Bay of Bengal. It was pitch dark both side of the bridge, except the sea breeze!

Woke up early before sunrise, just to get awestruck with the spectacular view of the Rameshwaram port - 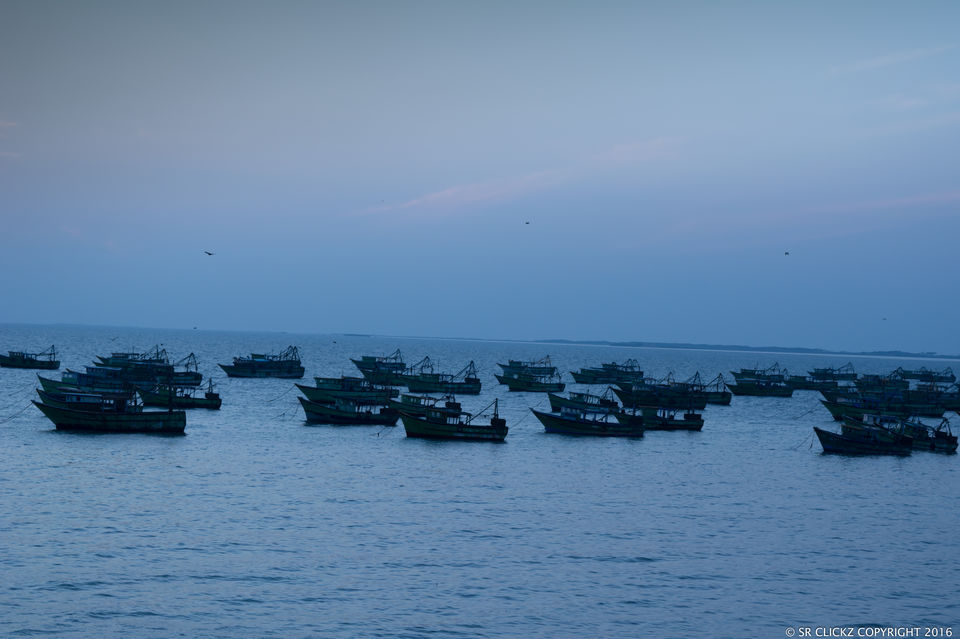 The port of Rameshwaram

We took a maxi van to visit Dhanushkodi, as we need to drive off road on the coastline to reach the end of the land. The van started for Dhanushkodi which is around 20 kms from the center of Rameshwaram. One can drive their own vehicle till the checkpost of Dhanushkodi as a new road has been laid all the way to till there. We had breakfast in a local fisherman's shack before we started for the off-road drive to end of the land. 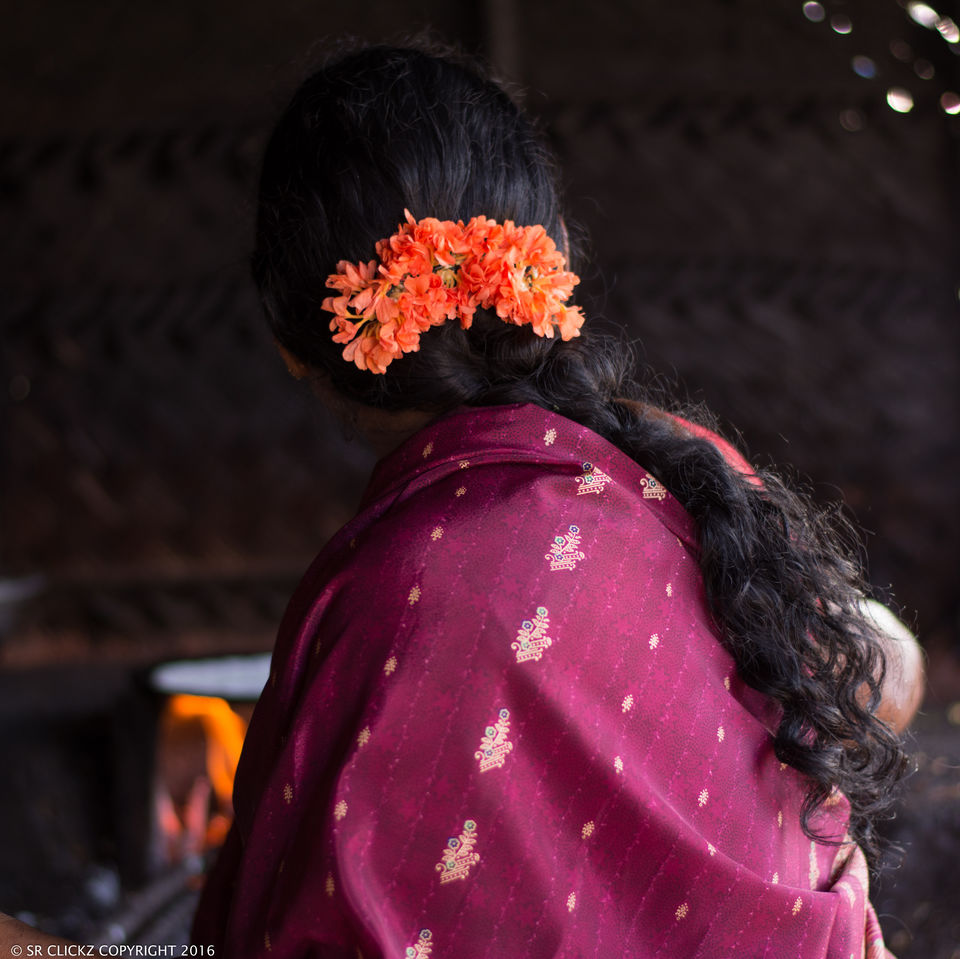 A local lady cooking in her shack, the idly and dosa made by her was so delicious :-)

Once we reached the checkpost, our van took off the road and started driving parallel to the coastline. One can see the calm and shallow Bay of Bengal on their left and the deep blue Indian Ocean on their right. It was a hell of a ride as the van was almost going 5-8 meters inside the sea while we were shouting profusely in excitement. On reaching end of the land, we could spot the ruins of the majestic town which is mostly under the cover of sand now. The city was completely destroyed in the 1964 cyclone and many structures were devoured by the mighty Indian Ocean. 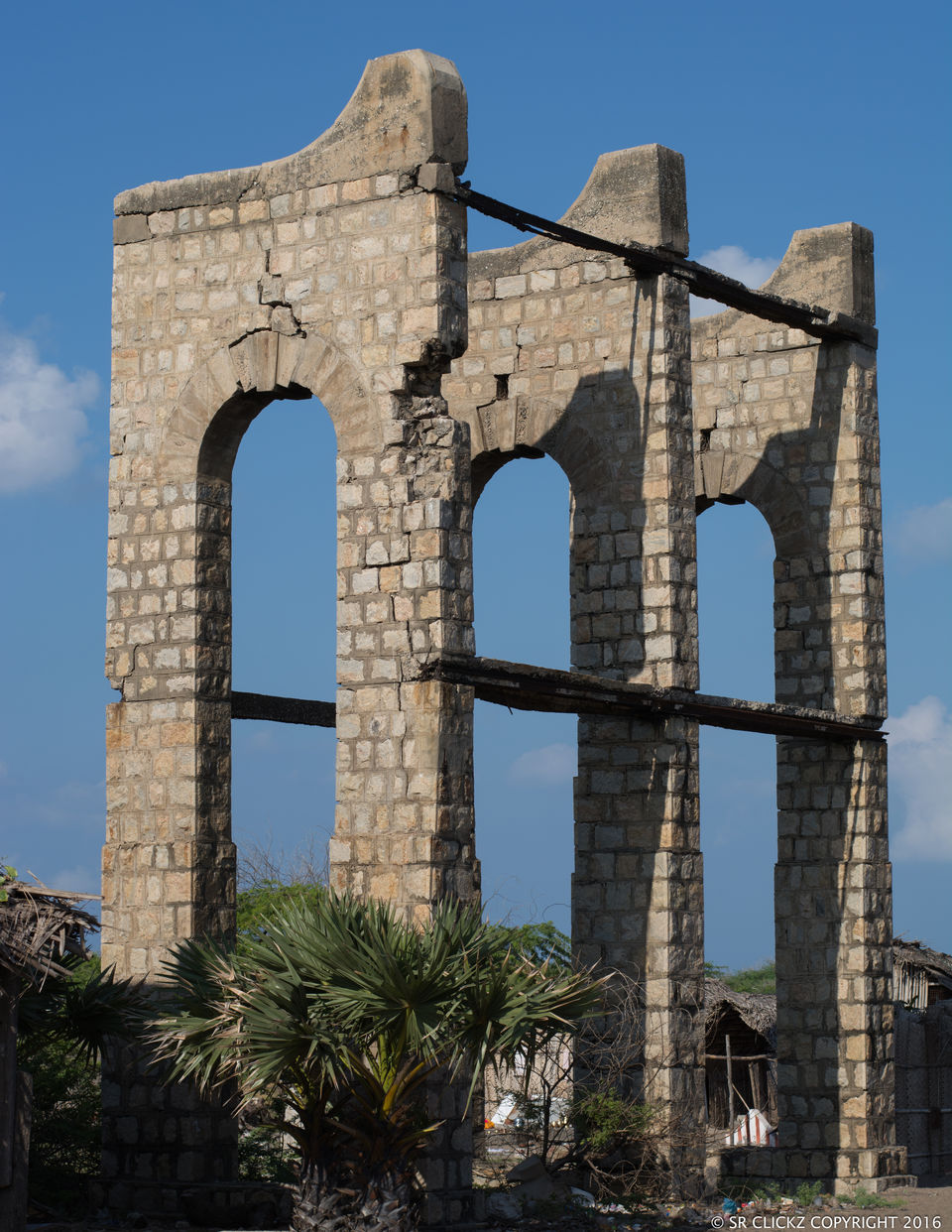 The ruins of Dhanushkodi railway station 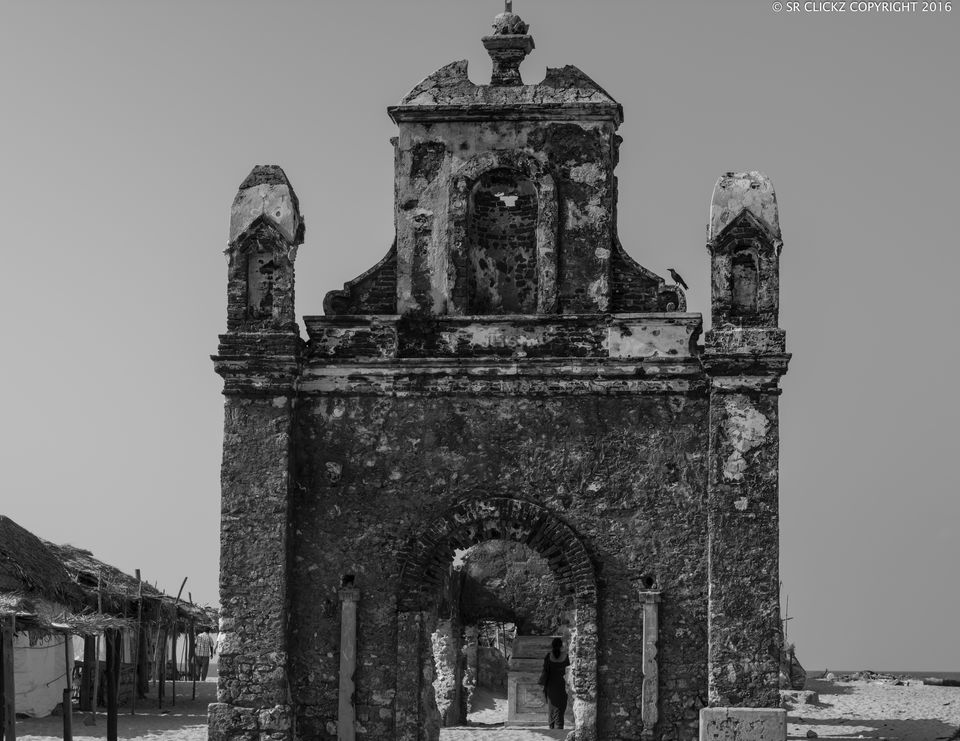 The ruin of a church

We had limited time to explore as the van driver was insisting continuously to return. So we decided to retire and return back during the dusk, as the temperature started to sore due to the scorching Sun. And this time we planned to ride our bikes all the way.. ;-)

We started in the afternoon to reach Dhanushkodi before dusk. On the way, we went to visit Kodana Rama temple and were beguiled by the view of the road leading to this temple. The road was intersecting the Bay of Bengal and the riding experience was just of the world.

Finally we reached the checkpost of Dhanushkodi and started walking along the coastline of the Indian Ocean. We saw on of the best sunset there, the spectacular view of the Sun setting on the mighty blue Indian Ocean will definitely leave you spellbound for moments. 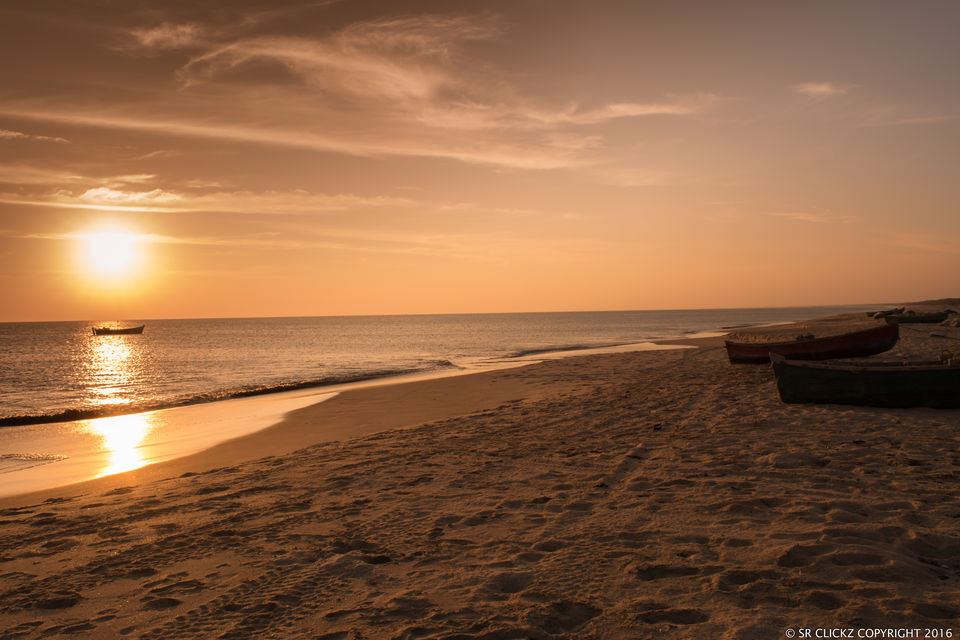 A glimpse of Sunset at Dhanushkodi 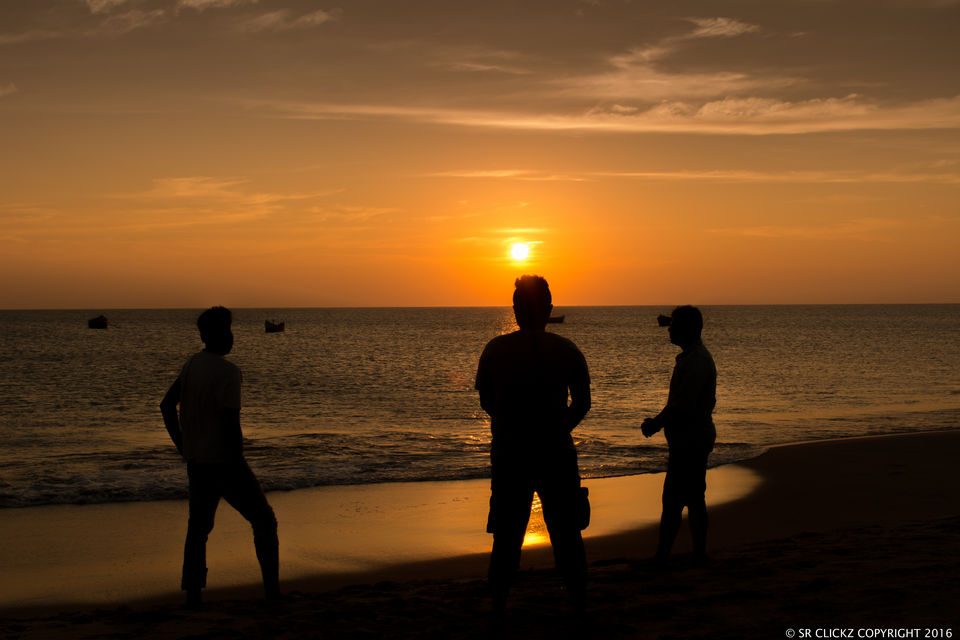 These beautiful views of sunset will go a long way in everyone's remembrance! We did not move until the Sun was completely gone out of sight and it started getting dark. 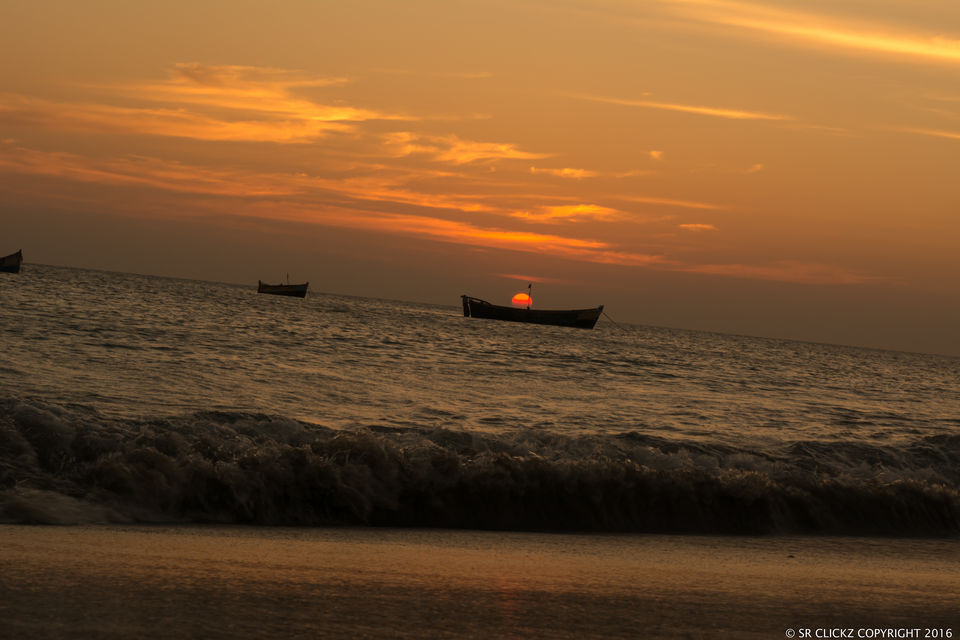 Sun setting on a boat at Dhanushkodi :-)

We returned to Rameshwaram after the sunset with all the beautiful and mesmerizing memories of Dhanushkodi. One should visit this place once in a lifetime, before the ocean eats up this shallow land. Also there are a lot of religious importance to this place, but keeping it aside one can visit this place just to explore these beautiful places :-)

Started from Bangalore around 4 AM in the morning.

Took our lunch break here. One can visit the "Meenakshi Amman Temple" in Madurai.