The best thing about Dublin is that you'll always have something that compliments your travel personality; whether you are a gourmand, a shopaholic, a teetotaller or like to return to the hotel tipsy. BY MALAVIKA BHATTACHARYA

Though Dublin is eminently walkable and all of the Southside’s attractions are packed into a tiny parcel, nothing beats being in the centre of the Creative Quarter on Drury Street. The Brooks Hotel is ideally placed at a stone’s throw from the neighbourhood’s trendiest restaurants, bars, boutiques and best sights. brookshotel.ie

HOW TO CROSS DUBLIN WITHOUT PASSING A PUB

Quite contrary to popular belief, you can actually cross Dublin without passing a single pub. Embark on a tour with Hidden Dublin Walks & Tours (hiddendublinwalks.com) that takes you through tea rooms, The Science Gallery, the Jam Art Factory, among other places right to the other end of the city. Funky Seomra (dancefree.ie) for example, is a club enroute where people get together for alcohol-free club nights.

Among the city’s hottest new hotels, The Dean is an ultra-cool space across from the peaceful Iveagh Gardens. You walk straight into the neon-lit bar, which doubles as the lobby and reception. On the upper levels, sleek rooms feature quirky Irish art in a bid to support local artists, turntables and stacks of records, Nespresso machines and trays of Irish munchies. Sophie’s, the buzzing, glass-enclosed bar on the roof offers a stunning view of the city skyline apart from being a top spot for parties. deandublin.ie

Just across the road is the Victorian-style building of George’s Street Arcade, one of the city’s oldest shopping centres, reconstructed after a fire gutted it in the 1800s. Under the arches of this market, you’ll find stalls selling books, second-hand stores with vintage clothing and antiques, florists, and food stalls. georgesstreetarcade.ie 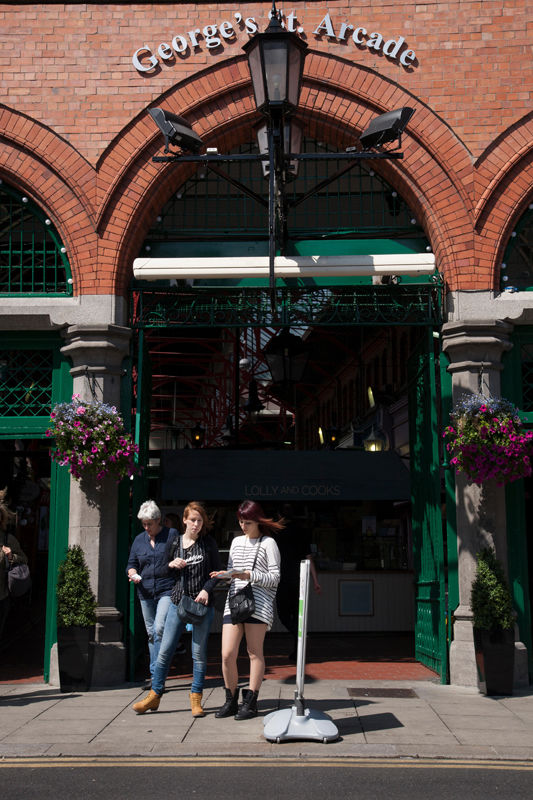 In a grand Georgian building just off Grafton Street, the Powerscourt Townhouse Centre is a major draw for its boutiques and restaurants. In the 18th century, the building was Lord Powercourt’s townhouse, and the architecture retains a regal flair with a glass roof letting filtered sunlight in and shops surrounding a central courtyard. It’s crammed with fashion, culinary, and design offerings. The stone steps leading up to the entrance are packed with locals and visitors nursing coffees while watching the buzz of South William Street. powerscourtcentre.ie

For some of that typical Irish craic, there’s nothing like an old-school Dublin pub such as Grogan’s. A local described it to me as “a permanent art exhibition”, referring to the numerous and ever-changing works of art by local Irish artists that hang on the walls (also for sale). As with many of the city’s pubs, Grogan’s was, in the ‘70s, the haunt of prolific and thirsty writers. Today, it remains a prime spot for people watching, given its unbeatable location in the heart of the city’s shopping quarter. Kick back and say sláinte! groganspub.ie 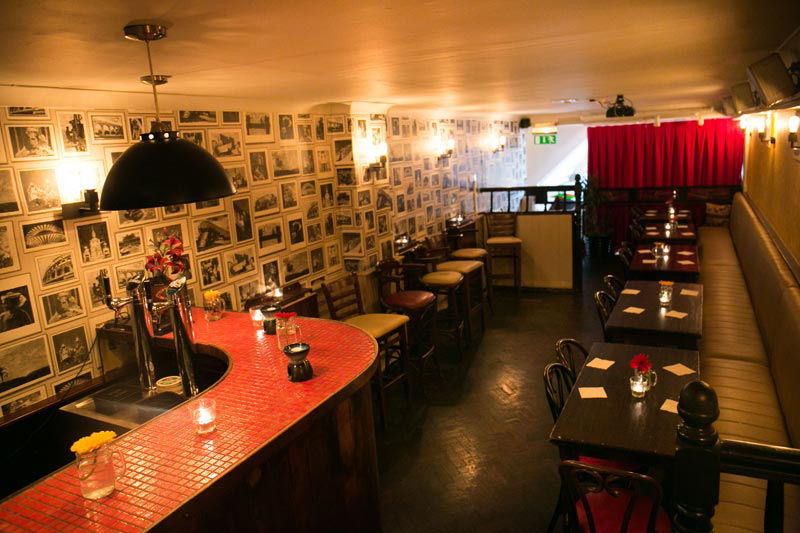 With its skimmed-coconut-milk coffees and matcha green tea lattes that fit right into the healthy and organic rage taking over the world nowadays, it doesn’t get more hipster than Kaph on Drury Street. The café draws a range of creative types to its two-storey establishment, and it’s not uncommon to find a pop-up exhibition of an artist’s work on the upper floor. kaph.ie 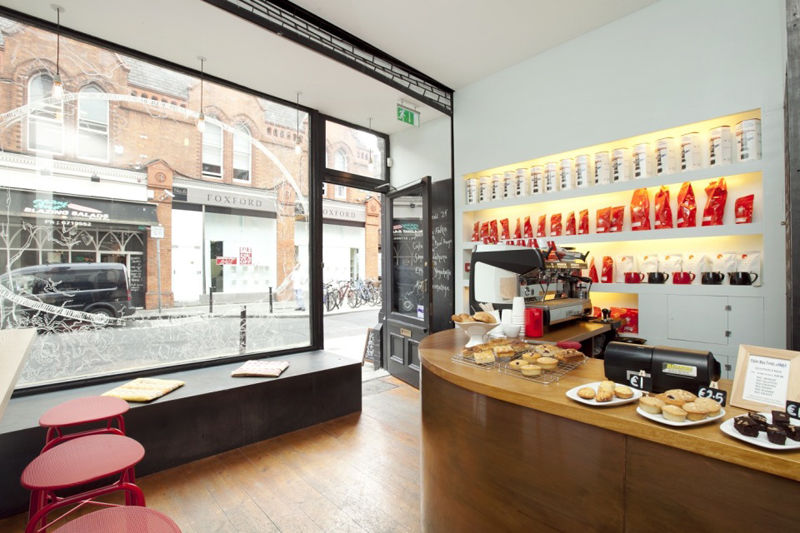 Their Southside branch, also known as Sister Sadie, keeps up the easy going atmosphere. An airy space with pale wood interiors, minimalist design and a wide glass frontage overlooking the street, it’s a lovely spot to get your morning dose of caffeine and a muffin, and lazily segue into brunch with their selection of Middle Eastern flavours. Harrington Street, Dublin 8. 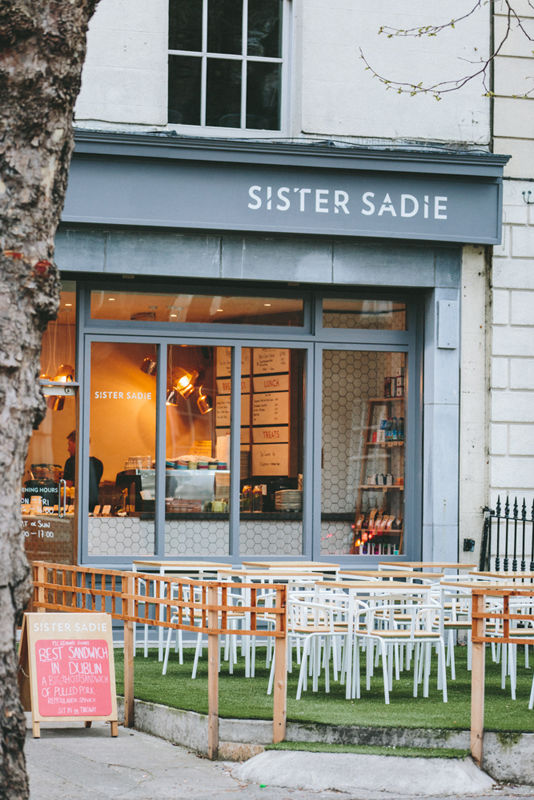 Coffee is no small affair here in Dublin. North of the River Liffey, Brother Hubbard is an independent café that’s made quite a name of itself in the coffee and sandwich space. brotherhubbard.ie 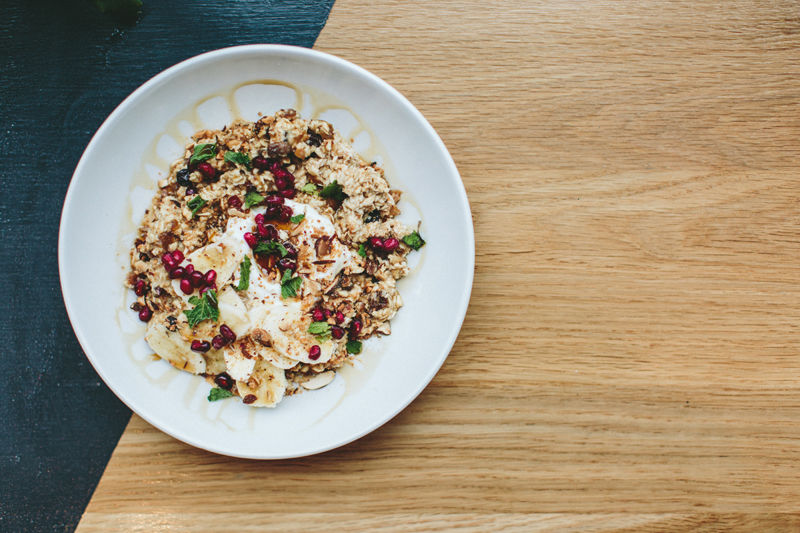 Multi-level offerings seem to be all the rage in Dublin, and Fallon & Byrne, on Exchequer Street, stands as yet another testament to this fact. A wine cellar in the basement, a desireinducing grocery store on the ground level, and a lovely restaurant in the upper levels, this is where you can buy your bread and eat it too. In the lanes of the airy food hall, dip into buckets of green olives, taste crumbly cheese, and breathe in the aroma of freshly baked bread. There’s a coffee counter and bakery, and at the deli, you'll find a great honey-roasted ham and Parmesan cheese sandwich stuffed with fresh greens and tomatoes. For dinner upstairs though, indulge in fresh fish with spinach and pumpkin puree, along with a side of roast carrots and baby potatoes. fallonandbyrne.com

THE VIEW > On an easy day, walk to the end of the Dun Laoghaire Pier for a view of the southern neighbourhoods across the Dublin Bay. 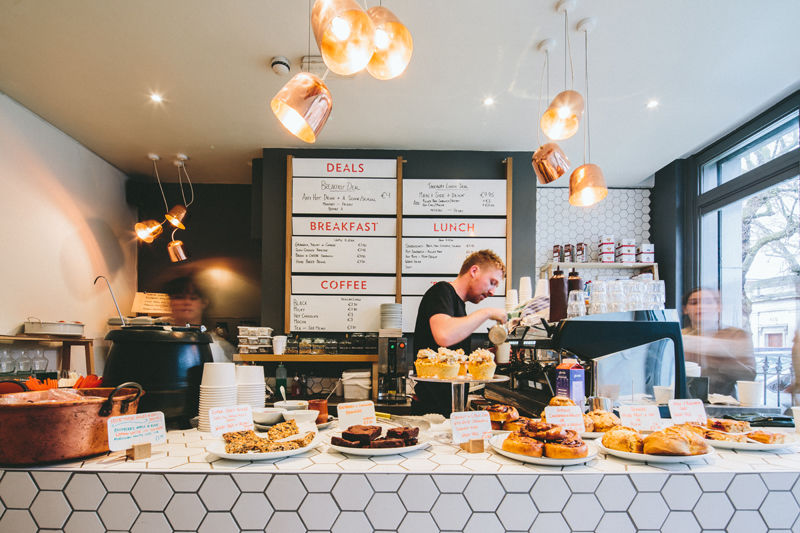 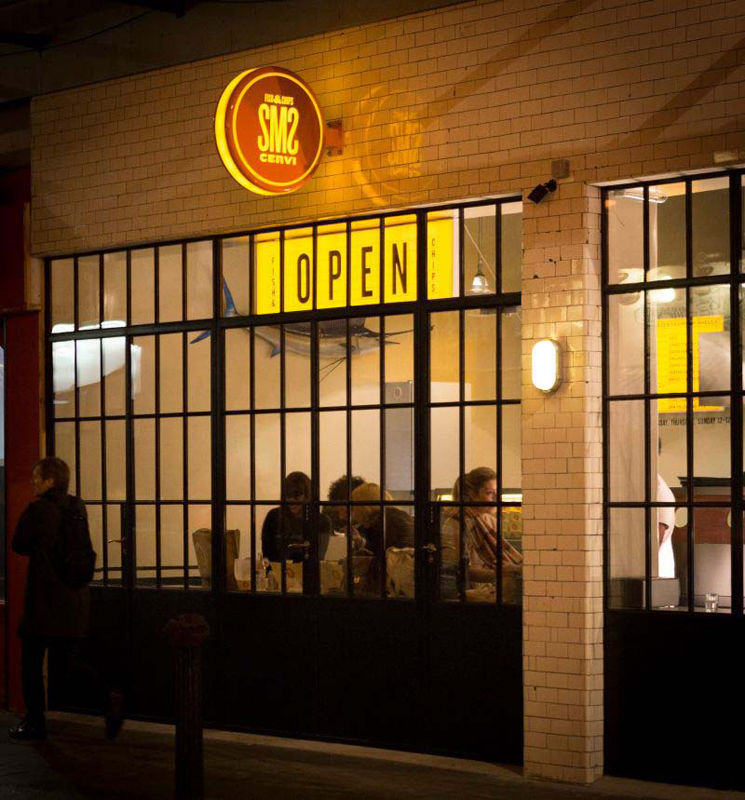 The glaring red of The Temple Bar in Dublin, a well-known landmark that locals use as their compass North. 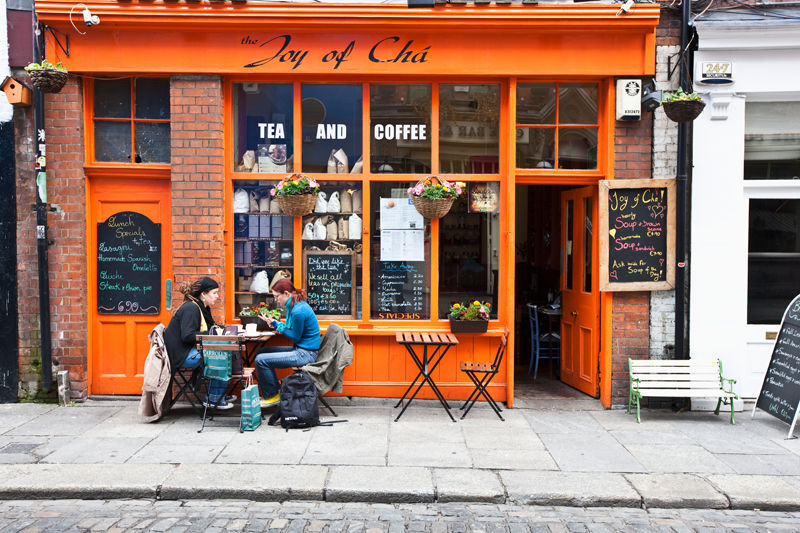 WHY GO TO SOUTH DUBLIN...

There’s a buzz about town in Dublin’s once-weary quarters. Hit by a major economic slump in 2008, the Irish capital is on the upswing with a resurgence of trendy cafes and concept stores, experimental bars and vibrant restaurants. Parts of the city that once wore a dishevelled look with abandoned warehouses and boarded up windows are now being reinvented by a slew of hip young locals, out to reclaim these spaces with art, music, design, and food.

Dublin is a city on a cusp and the signs of a revival is apparent. The economic downturn is fresh in the minds of young people in their 20s and 30s. Yet, their spirit is indefatigable and they are using all the tools at their disposal to lead a creative renaissance in a city so full of Gaelic charm.

Though the city is best known for its always lively Temple Bar area, there are charming neighbourhoods away from this loud tourist trap that have given rise to true gems. A typical example of such gentriﬁ cation is the aptly moniker Creative Quarter, an area around Drury Street in the south of the city. Just two streets away from the upmarket shopping hub of Grafton Street, a stone’s throw from the Dublin Castle, Trinity College and open green spaces including St. Stephen’s Green, this is the enclave where design, art, and resilience collide. Full of speciality businesses, boutiques, galleries, culinary and shopping oﬀ erings, the area is a perfect example of how a neighbourhood that was once rough around the edges has reinvented itself.

A gourmand's Dublin will have hard-to-book restaurants on the itinerary. You could start with these three.

A restaurant by the seven-floor Guinness Storehouse. Image credit: Shutterstock 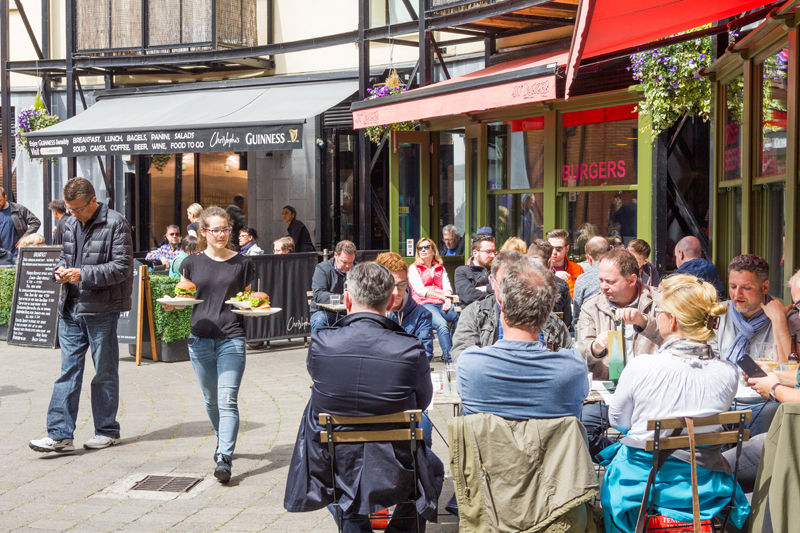 There are ways to destress on the weekend. From Irish coffees to single malts, these are our picks.

IF YOU'RE CRAVING ASIAN BEVERAGES, TRY

at 72, South Great George's Street, Dublin 2 . They've been serving some exclusive premium sake for the past two decades.

A five-minute walk from the Trinity College near Grafton Street, The Blind Pig is a closely guarded 1920s-style speakeasy, great for cocktails and dinner. Passwords and directions are revealed on reservation. theblindpig.ie 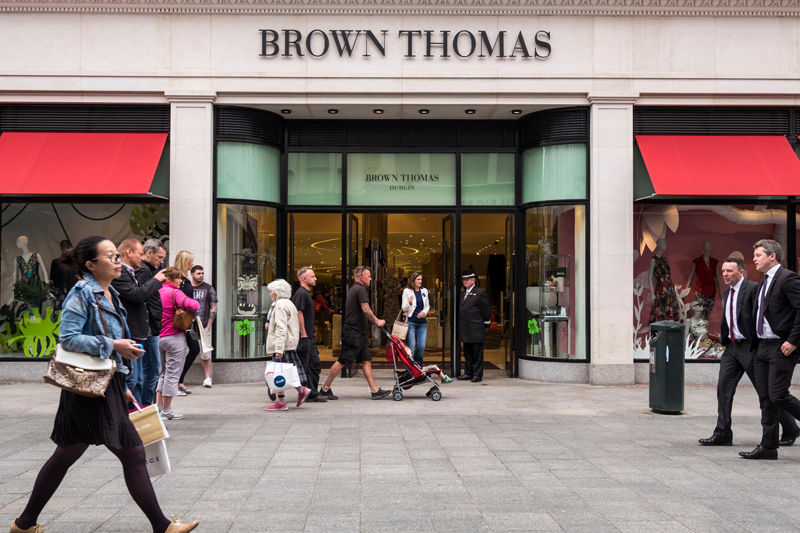 Indulge in some retail therapy. The shopping districts give you ample reason to swipe the card.

Dublin's characteristic quirks come in handy on a slow afternoon. Here's where you head.

On a non-descript road, behind a dark frontage in an old building stands Nowhere Man. A fairly new entrant that debuted on the scene only in late 2014, this minimalistic menswear store stocks designer labels in clothing, shoes, accessories for men who like to dress outside of Irish convention. Great finds include coats by Irish designer Alan Taylor and charcoal backpacks by Côte & Ciel. nowhere.ie 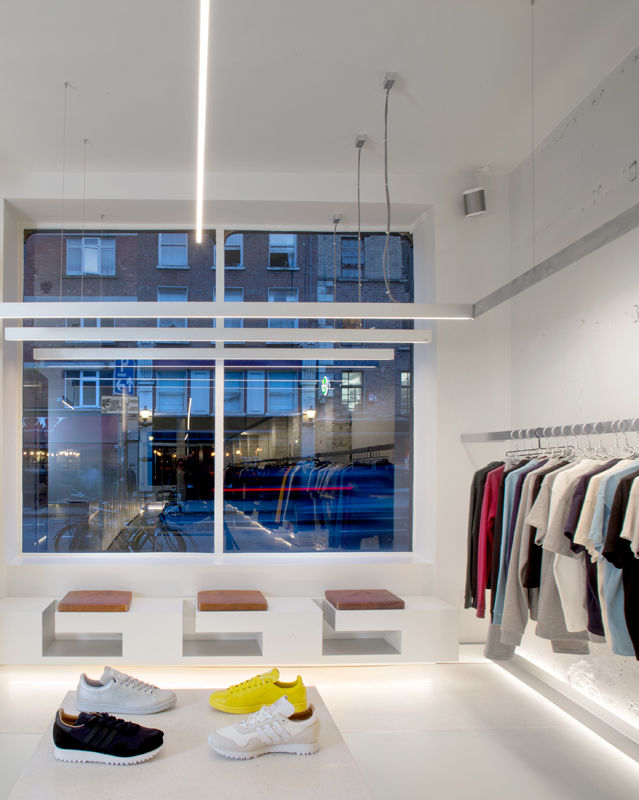 The Irish Design Shop was among the first few stores on Drury Street and is a labour of love by jewellery designers Clare Grennan and Laura Caffrey. Find the best of Irish design and craft; the store promotes indigenous talent. With an eclectic collection, featuring Denise Nestor art, delicate jewellery and homeware, soft wool scarves, notebooks by Duffy, and stationary emblazoned with Irish motifs, everything in the store is covetworthy. The duo scour the country picking out pieces and commissioning works to Irish designers in their mission to promote home-grown talent. irishdesignshop.com 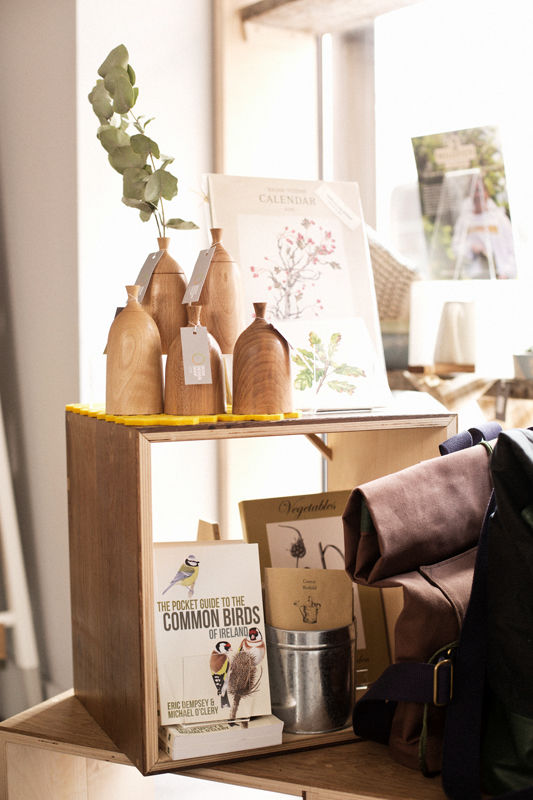 In a red brick building around the corner on Fade Street is The R.A.G.E—a throwback to the era of analogue music and old-school video games. The vintage record and video game store is every vinyl geek and ‘90s fanboy’s dream. The video game collection seems impressive, with retro favourites such as Mario and Zelda gracing the shelves. Dusty-jacketed LPs feature everything from the Vanilla Fudge and Talking Heads to Patti Smith and the Velvet Underground. therage.ie

BE SURE TO ATTEND AN

session. The folk music of Ireland plays a big role in its pub culture and traditional trad or music nights are lively affairs featuring bow strings and wind instruments, and often, a ﬁddle.

Book a suite in a quiet locale or a busy neighbourhood, here are two hotels catching our attention.

The Dean is for the artistically inclined traveller. image credit: The Dean 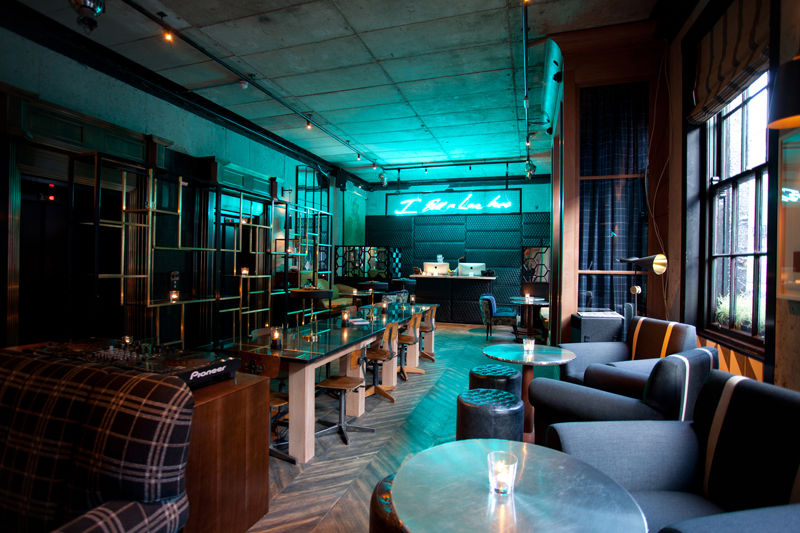 At the next corner, where tiny Fade Street branches off from Drury Street, is one of Dublin’s hottest institutions: Fade St. Social. There’s a restaurant with fresh local produce, a tapas room, and a cocktail bar. It’s the below-groundlevel tapas section that’s the liveliest, filled with large groups seated at the long tables.The tapas menu is great for sharing: pork belly, peppered bacon, beef Carpaccio, etc. Scrawled on a blackboard are the cuts of steak for the day: aged rib, tomahawk and the like, all sold by weight. A 590-gram chateaubriand? Go with an appetite. fadestreetsocial.com 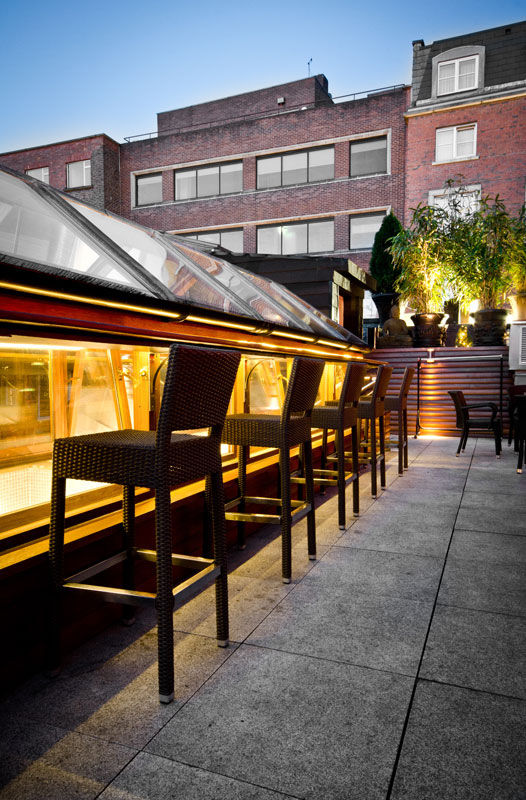 It’s not surprising to find a bar at every turn in the city that birthed the famous 'black stuff', Guinness, and Jameson whiskey. Hard to miss, though, is The Bernard Shaw, named for playwright George Bernard Shaw who is also among the city’s many famous sons. Coffee shop by day, bar by night, and pizzeria throughout, this establishment takes a cue from its graffiti-splattered surrounds to introduce bright art within its interiors. Don’t let the tiny entrance fool you—the innards open up to reveal numerous lively alcoves including a large, mural-covered beer garden in the courtyard that doubles up as an exhibition space; the Big Blue Van, which dispenses pizzas; and an indoor bar. This is where you might wander into a flea market one day, an art exhibit the next, and a live gig some other time. Whatever you walk into, it’s always a great stop for a pint. 11-12 South Richmond Street, Dublin 2