On way to Bet Dwarka, on jetty from Okha 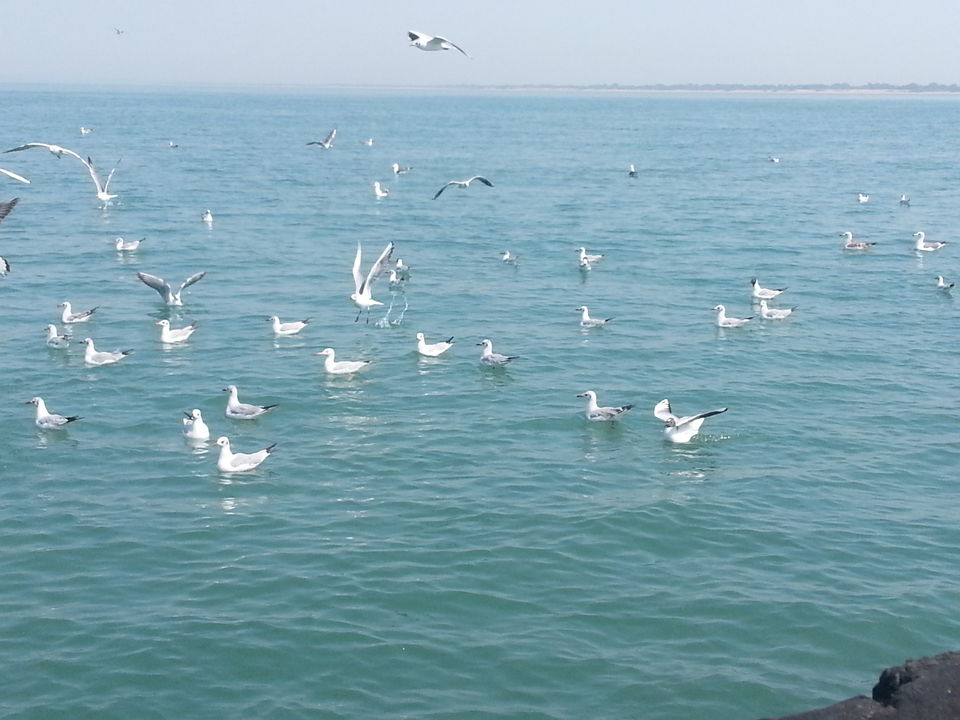 A temple that was….At least for me :(

Let me first tell you the route there is to reach Dwarka and Bet Dwarka and then probably you will realize the efforts I took to reach Bet dwarka.

I started from Porbandar around 9 in the morning and reached the Dwarka temple compound by 12.15. The ride in the bus was good, the roads being very well built and country side view very nice. The road runs parallel to sea shore mostly, so there were many windmills. The visiting time for Dwarka Temple is till 1 PM and hence I rushed in. Thankfully, there were not hours of crowd and I was able to get darshan.

To reach Bet Dwarka is another level of challenge even if you have an own vehicle. From Dwarka Temple, you first have to go to Bus stand just outside the temple compound from where you will get a bus to Okha, some 30 km far. Once you reach Okha, you can get a jetty to the island which houses the Bet Dwarka Temple.

You also see the salt town of Mithapur where there are many chemical factories of Tata, including that of salt. The town gets its name from gujarati word for salt “Mithu”.

I saw practically a whole village from Rajasthan (group of some 40-50 people) at Bet Dwarka. The Krishna/Sudama/Rukmini temples seem to have lots of pilgrims from Rajasthan. I got to know of one such tradition when I was in Sudama temple, Porbandar. Before a boy is married, he has to visit all such famous Krishna/Sudama temple in Gujarat and get stamps from same on a paper he has. Interesting!!

Well let me come to reasons why the day was bitter for me.

1)      The bus I took from Porbandar to Dwarka, stopped at a hotel where there was no toilet, not even a dirty one. Please don’t ask me what happened next.

2)      I was ill informed about the timings of both the temples. Now I don’t know why but they are being shut down from 1-5 pm. So for a person coming by bus who has to travel back some 3 hours to Porbandar, it becomes a problem. So even if the distance wise journey is not much, it is advised that you have a night halt at Dwarka. And this custom makes Dwarka unavailable for one day visit.

3)      The jetty system from Okha to Bet Dwarka island is absolutely in chaos and 0% pilgrim friendly. There are like 100-200 boats, and there is a queue system for boats for their turn, a classics example of excess supply not able to meet demand. It pains me to realize, that despite the fact that state government had built excellent infrastructure to reach Dwarka, the last mile being Bet Dwarka was totally ignored. So its like “haathi nikal Gaya par Poonch reh gayi”. Let me elaborate the specific reason

a)      So the system is like ‘ when the whole jetty fills up, only then it will leave from Okha’. So when you reach you wait for some uncertain time for the jetty to start.

b)      Secondly, there are two kinds of boat, one for the villagers and one for the tourist. So villagers wala jetty doesn’t has to queue up or anything and can go anytime.

c)       Tourist and villagers can’t switch on the boats. So when I went into the villagers wala jetty, the guy in charge scared me. He told me “madam aap chup jao is boat mein. Waise aap ko allowed toh nahi hai is mein le jaana, par fir bhi main aapko le chalta hu (Please hide in the boat, as it is meant for the villagers and not tourirst. But anyways I will take you.)”. Being alone I got shit scared, that should I continue or not, and even before I could decide, the jetty started. I was praying that please let it take me to my destination. The village people looked very strangely at me, adding more to my fears. The ride was some 10-15 minutes and even beautiful, but fear was my only feeling at the time.

4)      After reaching the temple, I was told that it would only open at 5 pm, meaning that I would have to wait for nearly 2 hours before being even allowed inside. This again means that I would not be able to reach Porbandar before night. I requested the guard to at least let me see the temple from inside if not the idol, and he refused very brazenly that I will not be allowed inside.

That got me thinking. I don’t need to go inside a temple to see god. I am not at mercy of a doorman or a pandit to let me see god. I agree, I seek darshan whenever I visit a temple, but if the pujaris, pandit, guard are the ones to decide that I will get that darshan or not, then I have a problem, a person who doesn’t even has the decency to go and smoke somewhere else, yes he was smoking right on the gate of the temple. I got up, folded hands and left the temple.

I am educated enough to distinguish between belief and superstition