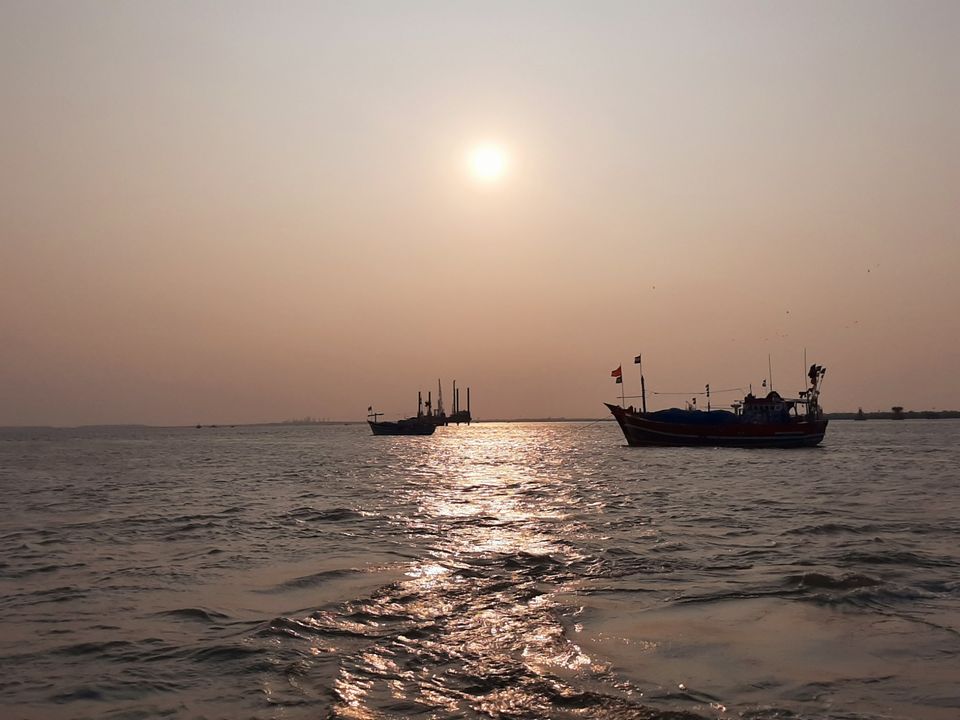 Bet Dwraka is an island at the mouth of Gulf of Kutch said to be the abode of Shri Krishna, the ruins are found underneath sea dated back to 1500BC. This is the main temple of Dwarka, most people miss this one.

Today we leave for Dwarka from Rajkot, I got the cab booked through Car on rentals. After enquiring with many vendors I found this the cheapest. The route to Dwarka is via Jamnagar, the journey from Ahm to Dwarka can be covered in a single day but as I was travelling with my parents I took stop at Rajkot, being a big city with Gandhi’s museum and shopping option.

In Jamnagar we visited the temple where Bhajan mandli continuously chants lord Krishna name. This is near Lakhota Palace and museum. The day we visited, the museum was closed we could go around the lake. The place has been well build with jharokas and soft music playing. On the way we saw the Jai vilas palace, which is private property and headed to Dwarka.

On the outskirts of Jamnagar, you pass through Reliance and Nyara refinery. Got to know from driver that the Mangoes of Jamnagar are quiet famous. The landscape is beautiful with ponds, grasslands, back water and many migratory bird. Wait…..i just got spotted a group of flamingoes on the road side pond. I took my camera and clicked few. There were many Siberian birds, the road side was full of birds like you are in Bird Sanctuary.

By noon we touched Dwarka, checked in to hotel, had lunch and started for Nageshwar Temple. This temple is open till evening and is one of 12 Jyotirlings. The access was easy without any checking, we did bribed the guard to get inside the sanctum and touch the Pindi or you can buy the abhishek ticket and get in.

Blessed by Lord Shiva, we started for Bet Dwarka. The ferry service starts by 4pm, after reaching Bet Dwraka you need to go uphill to the temple. The temple door opens for 30min and then close. This process keeps going whole day, the pandits explain about the importance of the temple, that this is the place where Krishna offered Sudama one handful of rice. The prasad in form of rice is offered here which you can mix in your kitchen and your house will always prosper.

It was dark by the time we reached the ferry point, boarded the ferry got some interesting group from Haryana and time just passed. In nite we had dinner at hotel, this phase is different from previous Gujarat places. Here you see less of Gujarati option to eat and more of north Indian and continental.

The Dwarka temple opens in morning at 6:30am till 9.30pm and the door opens for an hour and then closes, the same process continues whole day. We planned to attend Mangla Arti in the morning, our hotel was just walk away, at the beach view. We asked hotel to book the auto to drop us in morning, the temple door opened sharp at 6.30am and after checking all were let in the temple. There was not much crowd compare to some of my pervious worst experience.

After darshan when we came out, in morning mist the designs of temple was clearly visible. It has been beautifully designed and carved. There is a bridge made on the Gomti river which connect the temple to 5kunds. It is said one should take holy bath in kunds and then go for darshan. From the bridge we viewed a spectacular sunrise, with no phones couldn’t capture it. Sometimes its better to capture in your memory rather than camera.

We walked by the banks of the Gomti river, and soaked our feets in Arabian sea and returned to hotel for breakfast. We started for Somnath, the road was under construction so took a bypass and reached Porbandar. In Porbandar we visited Kirti Mandir and Gandhiji’s house.

We reached Somnath by early evening, took nap and then went to Somnath Mandir. This is also among one of 12 Jyotirlings. In evening, 7pm is the aarti we could hear the sound of drums till the main gate. It was sparsely crowded and we had darshan easily. The Pindi was decorated by flower petals and designs made all around. After darshan we took ticket from the prasad counter for Light and Sound show. It is conducted at the back side of temple, they have built an amphitheater. The show gives an insight into the history of temple and is nicely made, has good light effects. The inner sanctum will be empty at the time of show, so if you want to devote more time to Lord Shiva and don’t want any one to bother you, this is the ideal time.

The only area in Asia where Asiatic Lion occurs. It was at some time private hunting area of Nawab of Junagadh. After the British Viceroy’s put light on the declining number of lions, the sanctuary was established. The tickets should be booked online which gives you e-permit, the vehicle and guide are assigned once you reach Sinh Sadan and charges have to be paid there.

**For safari google Sinh Sadan, google map shows two Gir National Park, we went to the wrong one but any how made it to Sinh Sadan on time.

We got Gate no. 2, there is maximum probability of lions seeing but as we penetrated into Jungle we saw only few deers and pigeons. The safari is run in the buffer area not like other sanctuary where they operate at core area. The lions at Gir have gps chip but no efforts were made to co-ordinate so the visitors can have sight of lion. Its on your luck if the lion comes out to buffer area, you may see it. Have been to many safaris but this was the most un-organised, I felt like the jungle back at my home was better than coming all way far to see hardly any animals.

The thing that made so forget out dis-appointment was the yummy aloo ka paratha, just outside on the gate of Sinh Sadan with adrak ke chai. The food keeps the spirit high in Gujarat, no disappointment at all.

We returned to Somanth, its only an hour journey from Sasan Gir, and went direct to Somnath beach, then to bhalka teerth and temple where arrow strung Lord Krishna. It was a tiring day, we returned to hotel ordered our food at room and took a nap before going back to Somnath darshan. The beauty of temple drags you, we also saw pictures gallery of ruined temple.

Phase II of Gujarat is done, now we head to beach vacation to Diu.

Somnath and Dwarka: Lords Inn- Good service and food, every near to temple. The rooms in Somnath are huge and has pool and garden attached.

Travel: Booked the cab via car on rentals, our driver was the local guy and took us to all the places of interest. You can contact him directly to get better quote than the site Dharmesh 9825474444