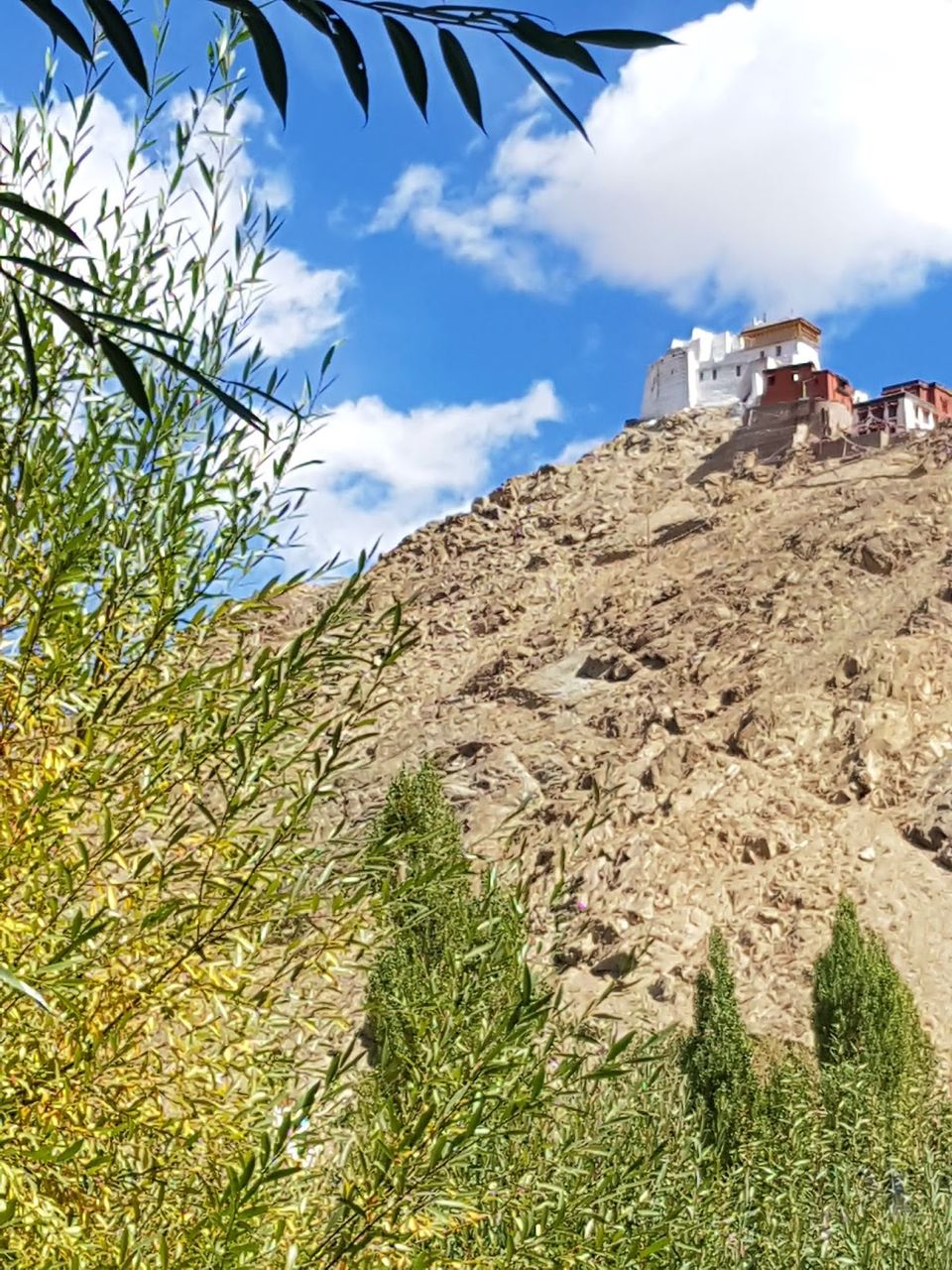 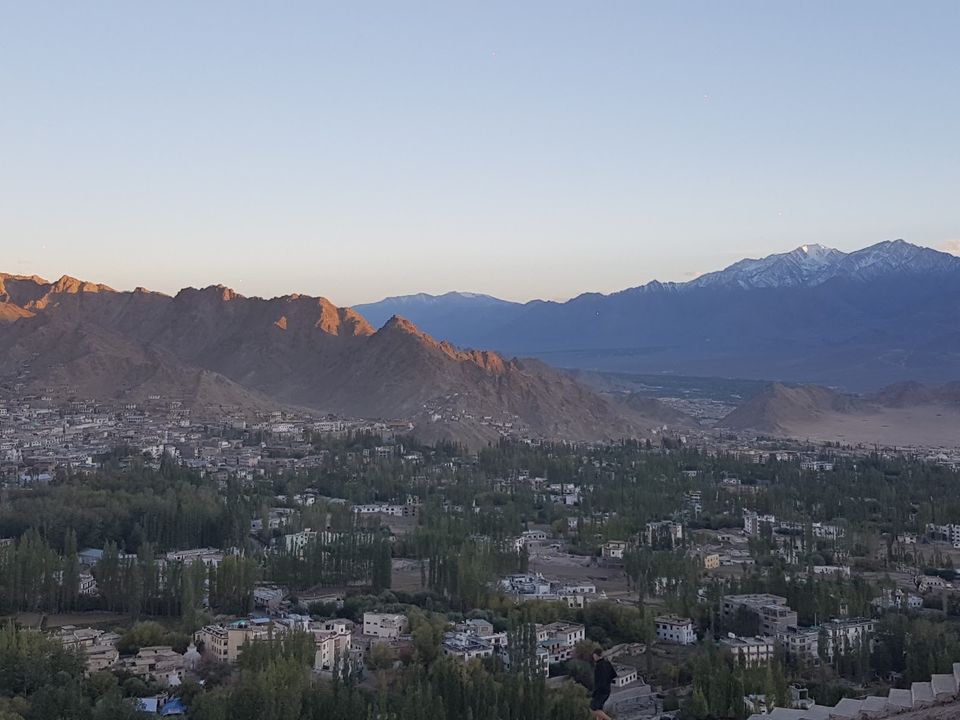 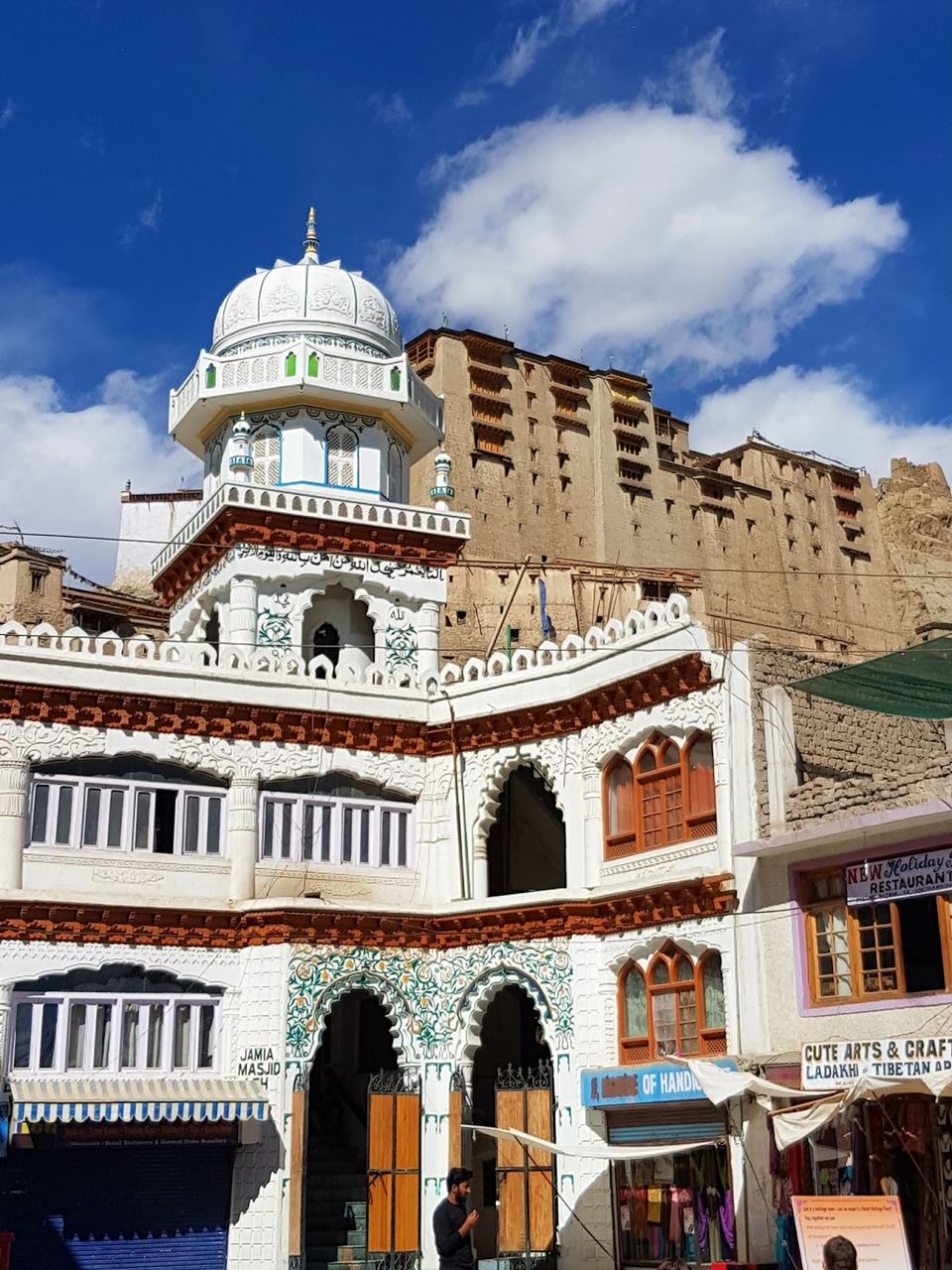 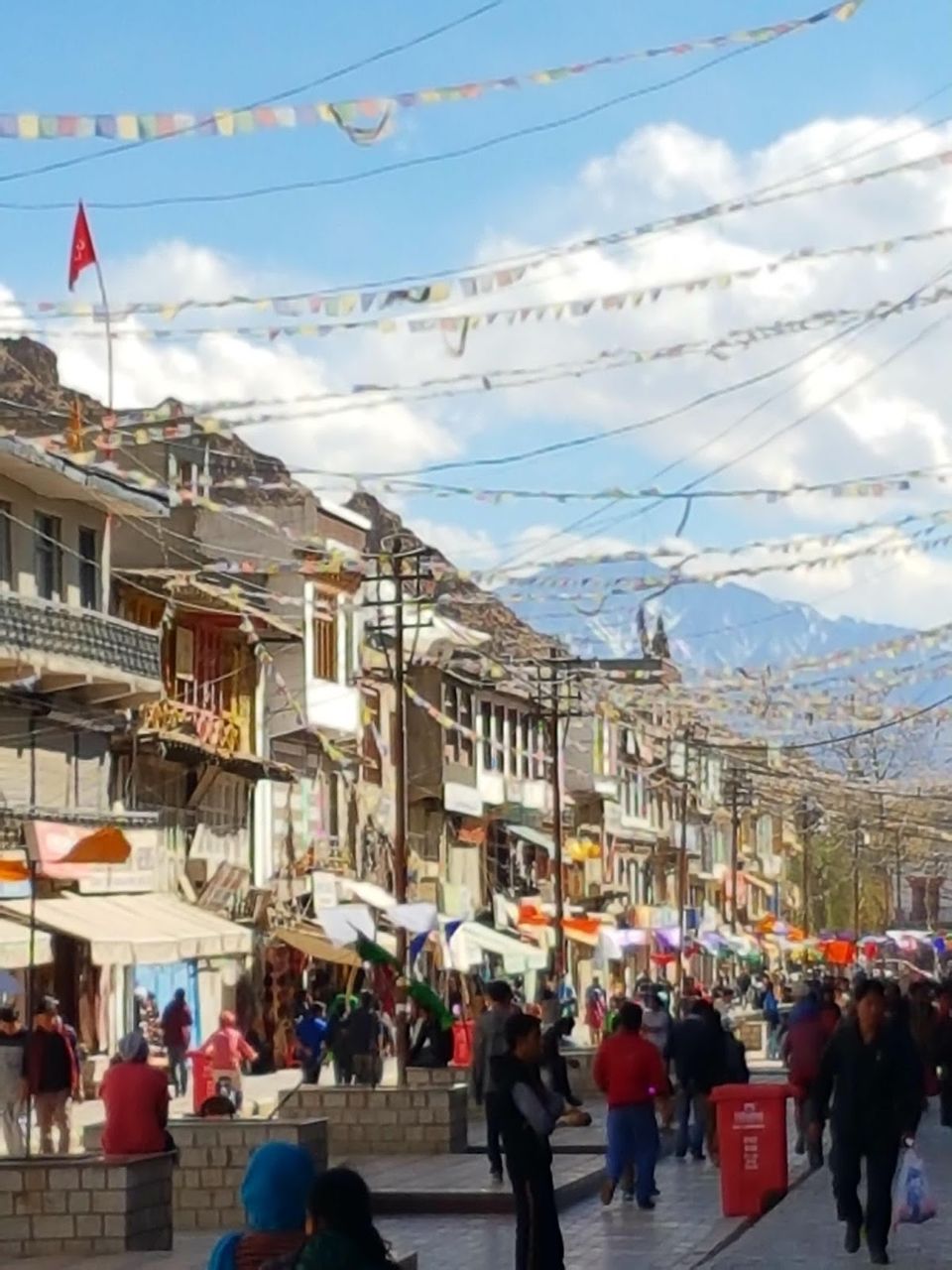 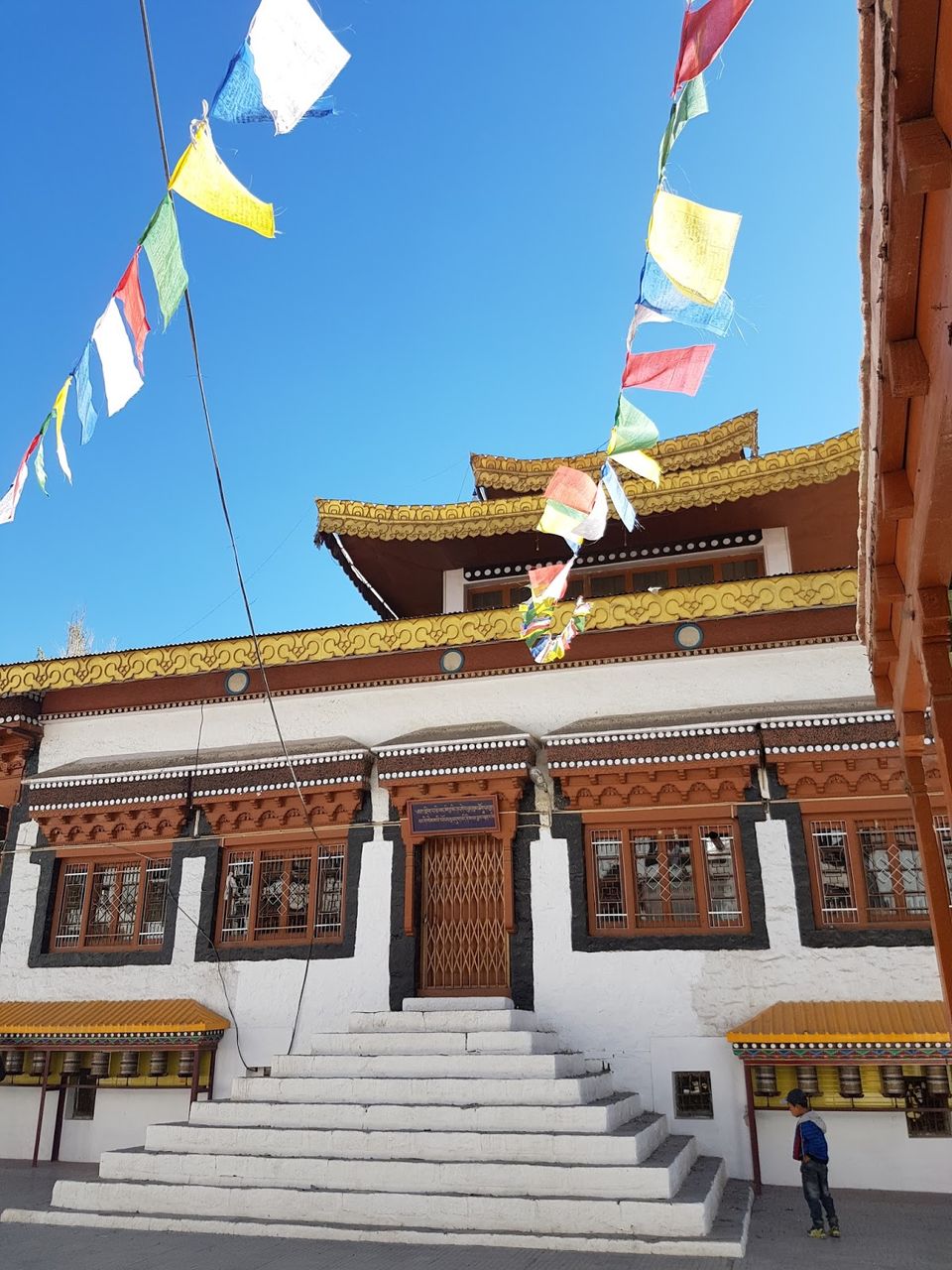 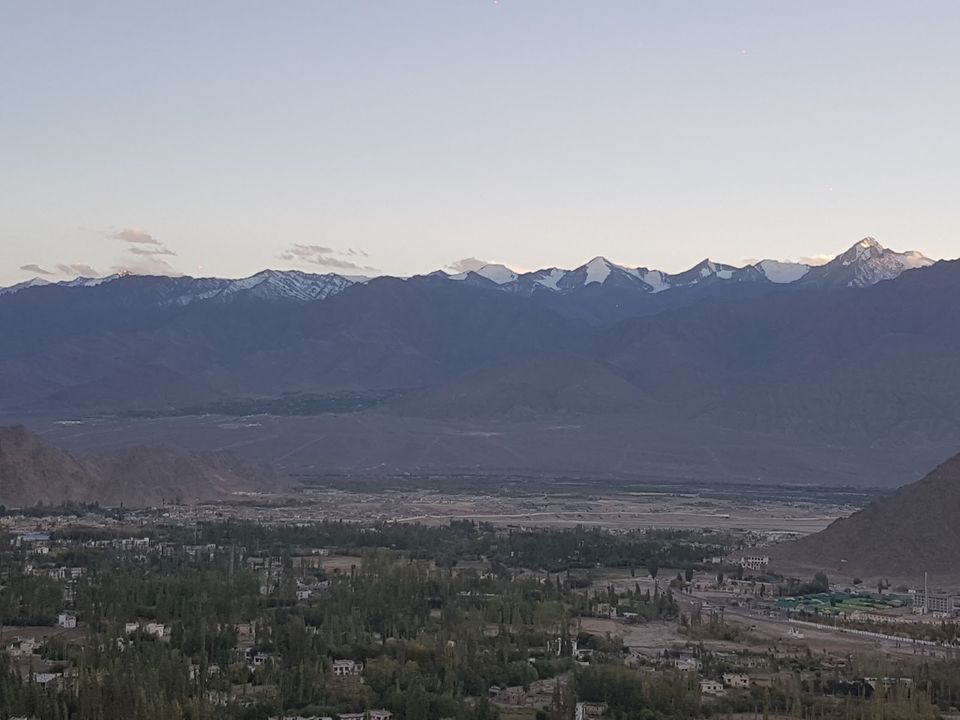 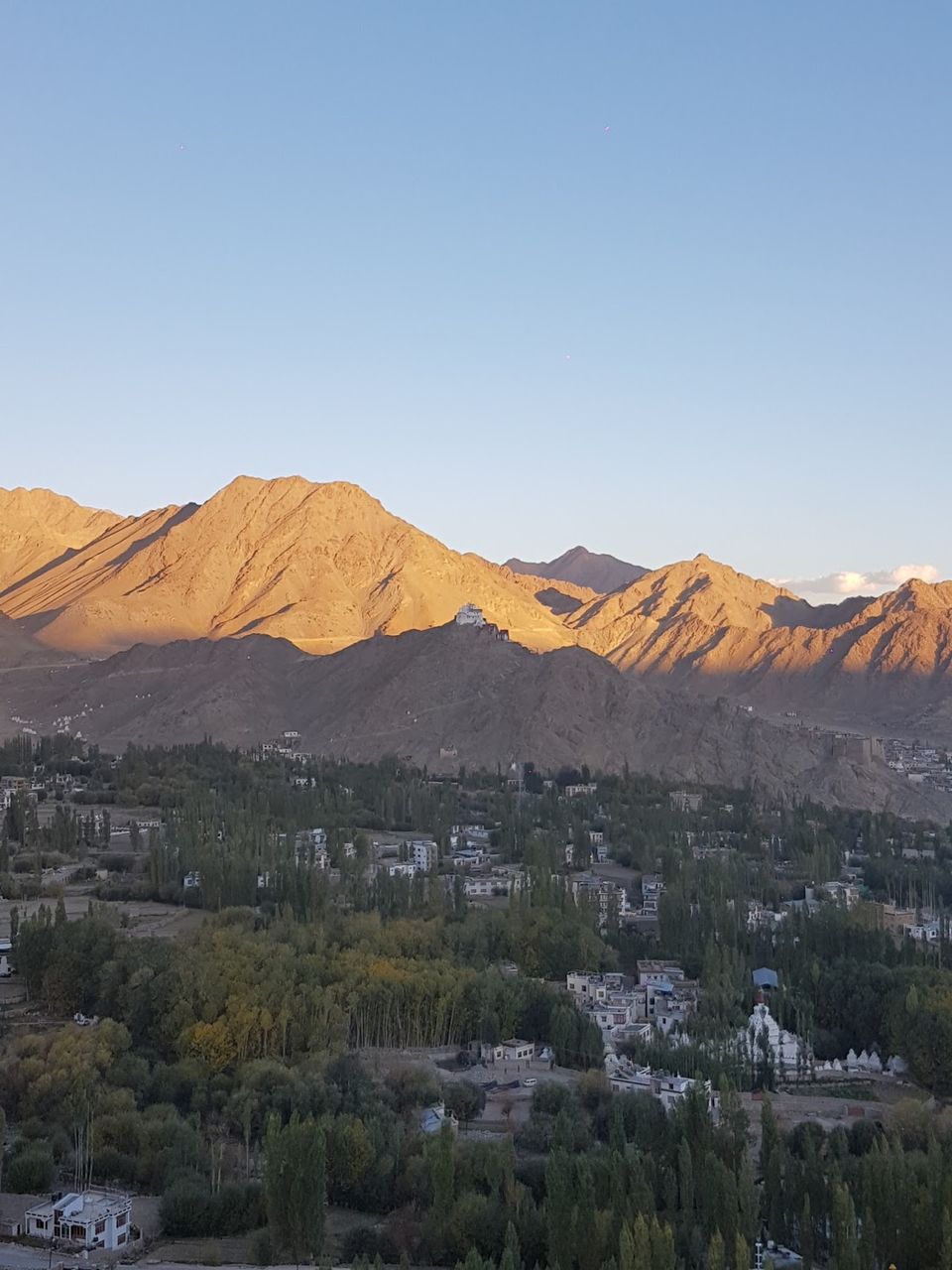 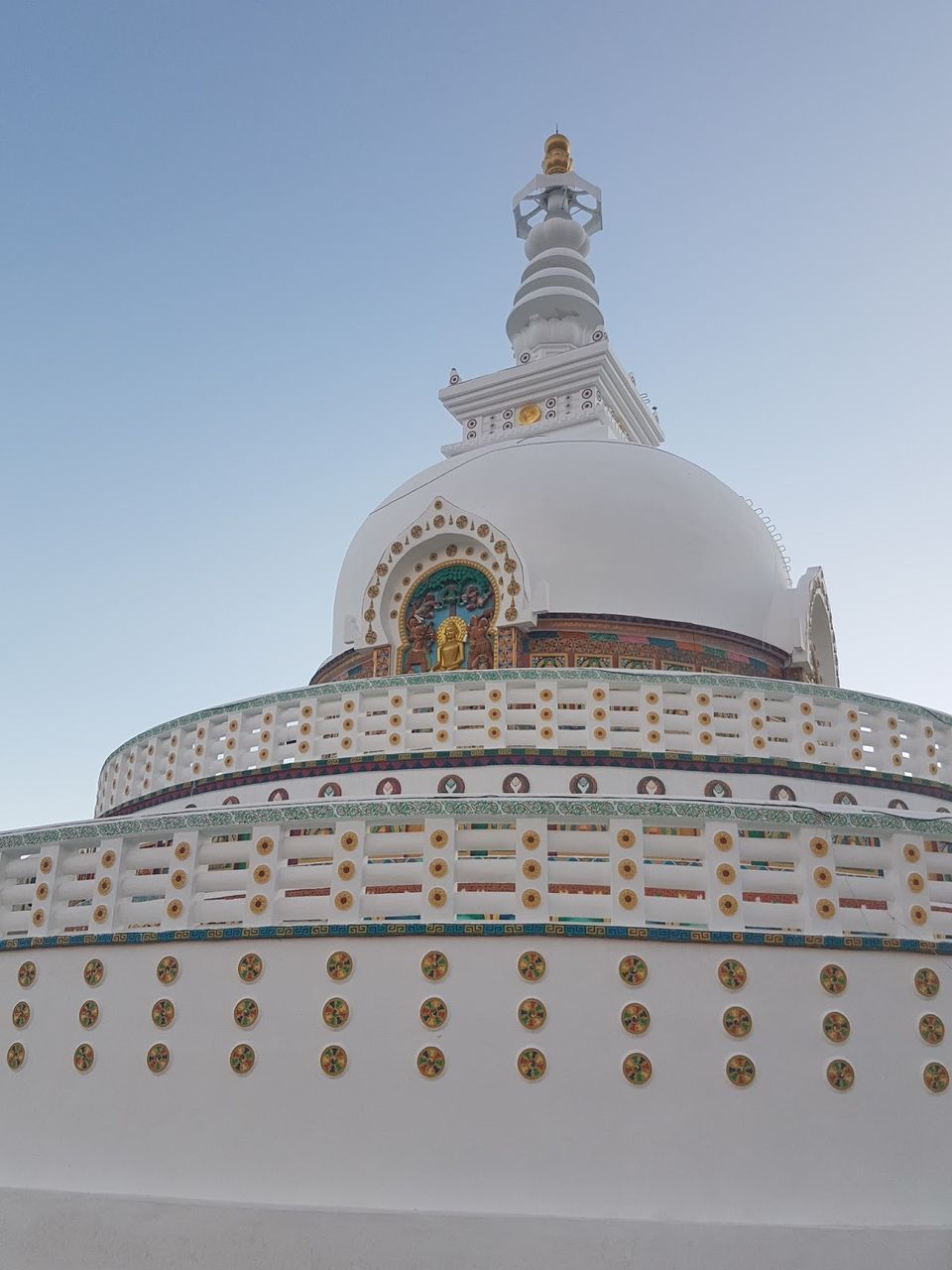 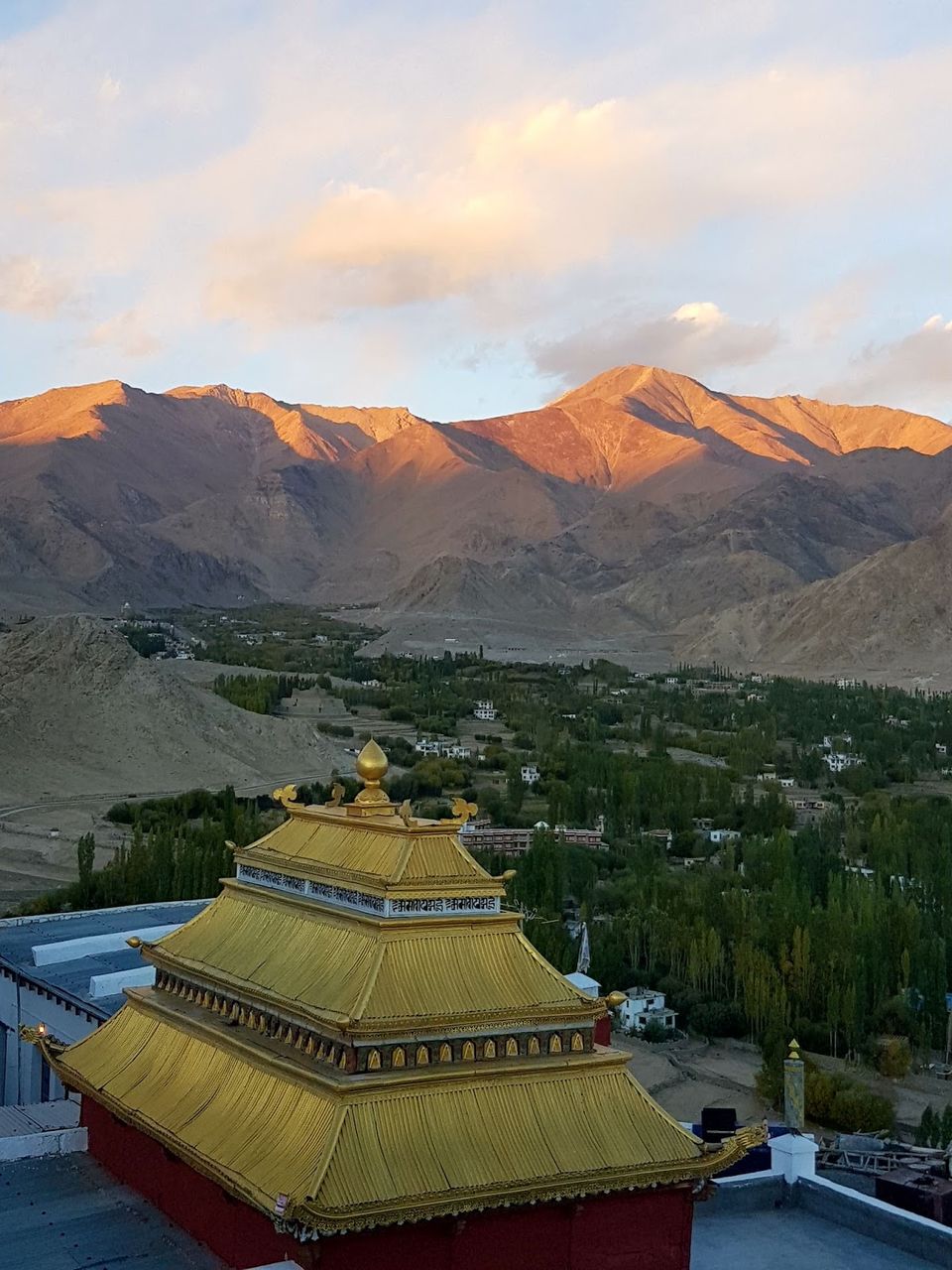 Are you crazy? How can you even think of going to Kashmir at the moment?" My concerned friends asked. The Kashmir part of the Indian State - Jammu & Kashmir had been under a security curfew for well over 60 days when this conversation happened. But I had booked well before the troubles had started.

"Well, I am spending 4 nights in Ladhak and just 1 night in Srinagar, so it's not as crazy as you all think," I responded back, even though I was half convinced that they had every right to send me to the asylum. If it was just me, I wouldn't think so, but with wife in tow, for celebrating her birthday, I must be mad. But then, I had given her options, and this trip happened to be on her bucket list, so we would stick to it. However, the word bucket made me uneasy, hoping that it would not be kicked. She was a tad uncomfortable with the Srinagar bit, but I assured her that the media hypes up the situation more than warranted, besides, I am not as reckless as I may sound. I had done my homework and evaluated the situation on the ground from sources living there. Even so, a day before the flight, my stomach had a few knots despite a brave face. I was more concerned about either of us experiencing altitude sickness; her ear was troubling her despite a preflight clean up. As a precaution, both of us had started a dose of a homoeopathic medicine called 'Coca' for faster acclimatisation at the high altitude we would stay at. She was both concerned and excited when I informed her about the substance used in the manufacture of the medicine she was taking. Peruvians chew the coca leaf for the exact same reason, just that they have formed an addictive habit of it.

D-day. Goa Air Flight GA-386 BOM-LEH at 4am, duration 2 hours 40 mins., Terminal 1B. Tried web check-in at 10 pm the day before. Very limited free seats on offer. If the airline system has permission to auto assign seats, then two passengers on the same PNR may end up rows apart. Reached the airport's domestic terminal by 3 am. Fortunately, at this time, it is near empty and lacks the chaos of a bus or train station that follows a couple of hours later. Further, the check-in and baggage drop queue is short. The ground staff at the counter gladly changed our seats and was kind enough to block off the third seat too, the load was light. The flight took off on time; crew smart and attentive; aircraft interiors looked well maintained. Purchased a light breakfast and decided to dose off until 40 minutes before landing. I could catch the sun rising at 6 am and the snow capped mountain peaks rising above the clouds made marvellous pictures. Leh (IXL), altitude 3500m, is a military airport and photography on the ground is prohibited. Despite the onboard announcement informing the same, there were many eager to take a selfie on the tarmac. Just like any other airline announcements concerning safety and use of electronics on board, this one too went unheard. At 7 am, the real temperature was some 5 degrees celsius and apparent double that. Always good to coat up even though the body bravely says "no", as the real temperature can play havoc on the body if ignored. The airport's welcome messaging system kept playing a loop on how one should get used to the altitude: Drink plenty of fluids (non-alcoholic) Keep the first day as light as possible(including meals), devoid of strenuous activity. Eat at short intervals. Avoid sleeping in the day. Butter is good, butter tea better. (Something that I found unpalatable). At 7 in the morning, one is more likely to get sick of the looped message than the altitude. Baggage collected, we were out and realised that in a mere 15 minutes the sun's UV rays needed to be fought. Sun shades on. No sign of Mr Haq, our guide and transport manager. What's the problem? Make a call - right? My phones (Vodafone)could not connect to any host network. So much for their advert that says "Wherever you go, our network follows". Apparently, host Aircel was down. I asked a JK Policeman if there was a payphone I could use. He smiled and gave me his cell phone. BSNL apparently has the best network in Ladhak followed by Airtel. I got through and all I could make out in this bad quality transmission is "One minute please". Yes, a minute later we saw Mr Haq running towards me with my name on a banner and a big smile. What can you do but smile back? Exchange of pleasantries over, he gave us his do and do-nots, which included wearing a double layer of clothes, cap and shades at all times outside. The message reinforced what we had heard inside, and was still looping in my brain now.

The hotel selected by me for the first night, 'The Himalaya hotel' turned out to be a dump. I had actually confused it for the Grand Himalaya (it sits in the same compound), which I am told, is no great shakes either. The pictures on Booking.com and Tripadvisor are from the days the days when this hotel must have opened. To be fair, it was a dump from the standards I am used to. The room was clean but well worn. The luggage rack fell off when loaded. The mattress was of good quality, bed linen too was just about acceptable as were the towels. The bathroom not that great in terms of design or aesthetics, but was clean and functional with matching toiletries that suit a decent budget hotel. The breakfast was passable but heavy, good to keep us going for some time. The saving grace was the smile and service attitude of the staff. By 9 am, I was experiencing a mild headache. Back in our room, we had to undergo mandatory rest for 4 hours at least and we discovered the joy of television. Or, the angst of missing what we take for granted back home. The TV had very limited channels playing, the best being to endure the re-runs of a comedy show by "Kapil Sharma". It made my headache worse and I thought that it would be better to put on my ear plugs and do some electronic work. Lo, and behold, by 10 am the internet services crashed. Not just at the hotel but all over the City. Disobeying rule number 4, I decided to take a short nap post consuming a bottle of water.

I woke up at 2 pm and my dear wife had a cup of green tea ready. We were both hungry by now, guess the breakfast had been digested. Mr Haq had promised to return by 3 pm. Not wanting to be in the room longer than required, we decided on a quick stroll to figure out the neighbourhood. It turned out that the market was just about a kilometre away. We picked up some essential supplies for our travel over the next few days and bit into our favourite chocolate bars to calm the hunger pangs for a bit. We consumed a litre of water on the never ending long 1 km journey back to the hotel.

As promised the smiling Buddha called Haq was waiting for us, with a local Airtel SIM card to make sure we could communicate. (remember inaccessible phone?) We hopped into his vehicle to go back the same route we had walked minutes back, this time to a restaurant Lamuraya that served local food. A lunch of Thupka (noodle soup) and Momos (steamed dumplings)chased with Kashmiri Kahwa (tea) was exactly what the body had been craving for.

With belly happy, the wife was all bright and cheerful to notice the shops surrounding the eatery, followed by a walk in and buy of Pashmina shawls. One soon became two and then three. An inspection of the trinket market on Mall Rd, taking in views of the Leh Palace and Masjid, and later, we decided to visit the Shanti Stupa. However, as a matter of housekeeping, we decided to make sure our booking at the hotel 'Grand Dragon' for our final two days in Leh was alive and well.

We passed the markets, including a whole chunk of the City that had been carried away by a massive mudslide in 2010. This hotel true to its rating looked like one I am used to. Mr Haq checked for the booking made by him, only to be told it did not exist. Normal circumstances, I would have lost it, but taking care that the air was thin and I could get an anxiety attack, checked for what was available. Was told that only superior category rooms costing 30% more than the rate I was communicated for the room that was supposedly booked-and-now-not was available. Fortunately, Haq was not the timid looking man he seemed to be. He called the senior Manager through whom the booking was made, who in turn admitted his mistake for not communicating the booking down to reservations and instructed that the superior room to be offered at the same price as was previously contracted. I could not complain. To further make up for the situation, the manager invited us for high tea while the reservation formalities were being processed(remember, the internet was down - so everything was being done manually).

Shanti (Peace) Stupa, sits on a hilltop with a commanding view of the City and surrounding hills. "Be careful. Please cover yourselves properly. Walk slowly. If you feel dizzy, just sit down and call me. Madamji, you sure you are OK?" The fatherly concern of the Buddha Haq. We assured him we were fine. Wife feeling devout entered the Buddha temple, and walked around the Stupa, and paid respects to everything holy in sight; while I stuck to my photography, respecting the 'No Photography' signs where applicable. I don't know if it was a marketing statement or a genuine one, but Haq complemented our fitness level and quickness to adapt to the altitude so quickly as compared to many who need at least 24 hours. Irrespective, it felt good that the medicinal drug had helped. Back at the hotel, we walked up to our room, had some more tea in the company of Kapil (on the TV screen). We got a call at 7 pm by the hotel manager inquiring about dinner. Told him not to worry as we would call it an early night. Not that we had to get up early, but wanted to catch up on the sleep lost the previous night, and forget the cube called room we were in. By 8 pm, lights out, but sound sleep was not. There were some guests who had checked in and were discussing rooming arrangements like selecting berths in a railway compartment, loud enough to be heard in neighbouring Tibet. With irritation, my headache quotient went up. Quietness returned for a while and I slipped into slumber. A thud and knock on my door and I woke up with a start. The person who did this would die. I opened the door and the guy who stood in front of me must have felt like harry Potter in front of 'Death-eater'. He was part of the same noisy gang earlier from the apology that followed. I gave him a quick lesson in hotel etiquettes, the standard military night suit lending authority to my words. The unruly platoon of overgrown teens promised to behave. I shut the door with and smiled. But the angst had driven up the headache. I made some more tea and then hit the sack again. Worrying about the symptoms only compound them, so made an effort to just meditate self to sleep. Khardungla pass was 8000ft higher and my headache better go away.

This blog was originally published on 'Trip it'