A Guide to Exploring Myanmar in 2 Weeks 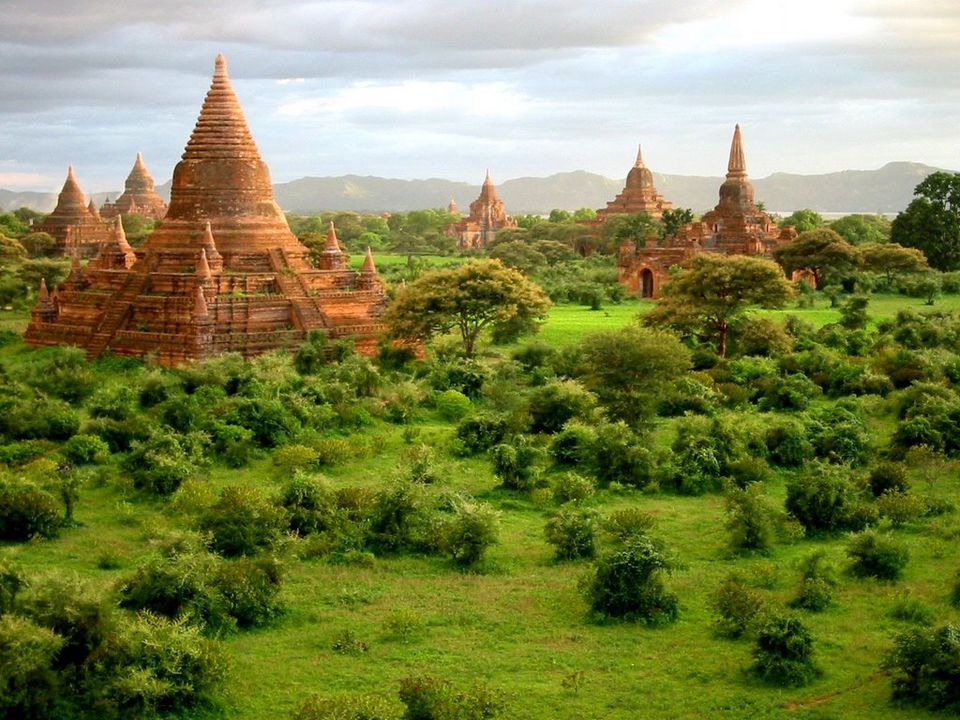 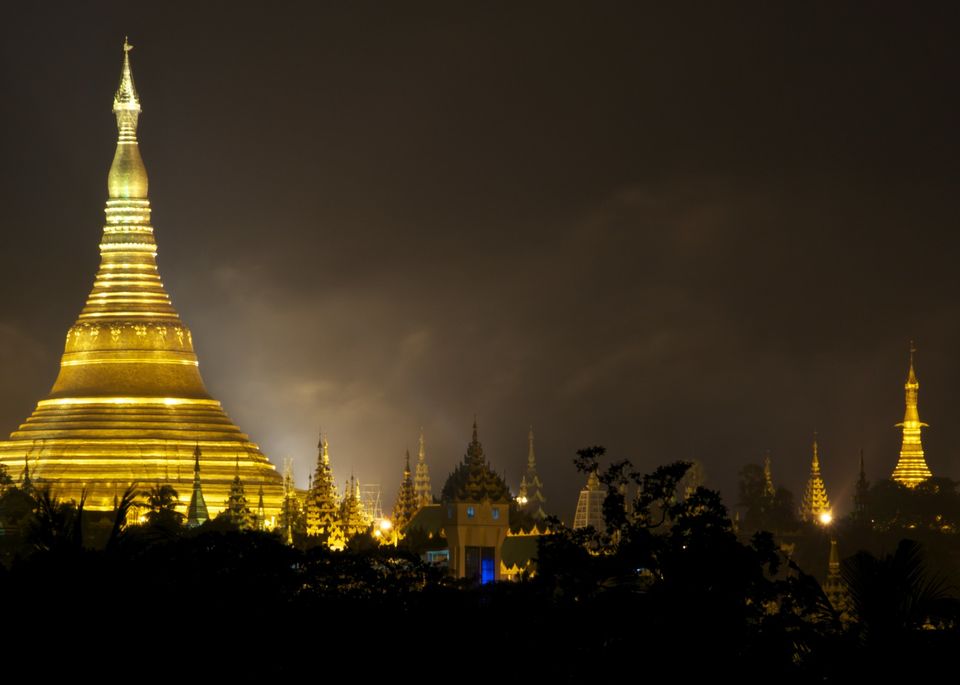 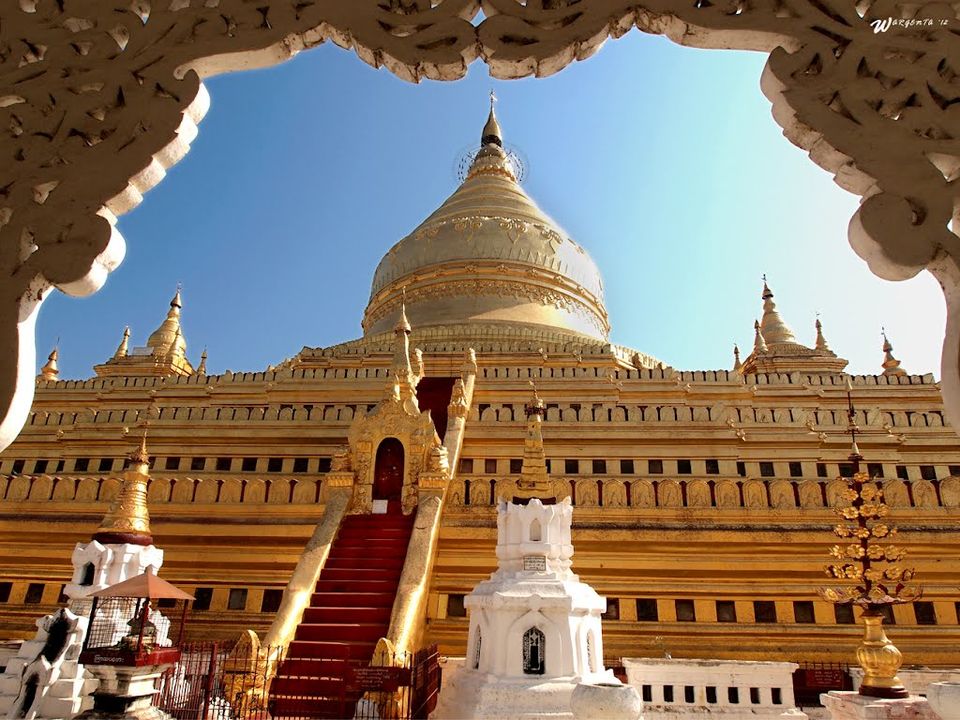 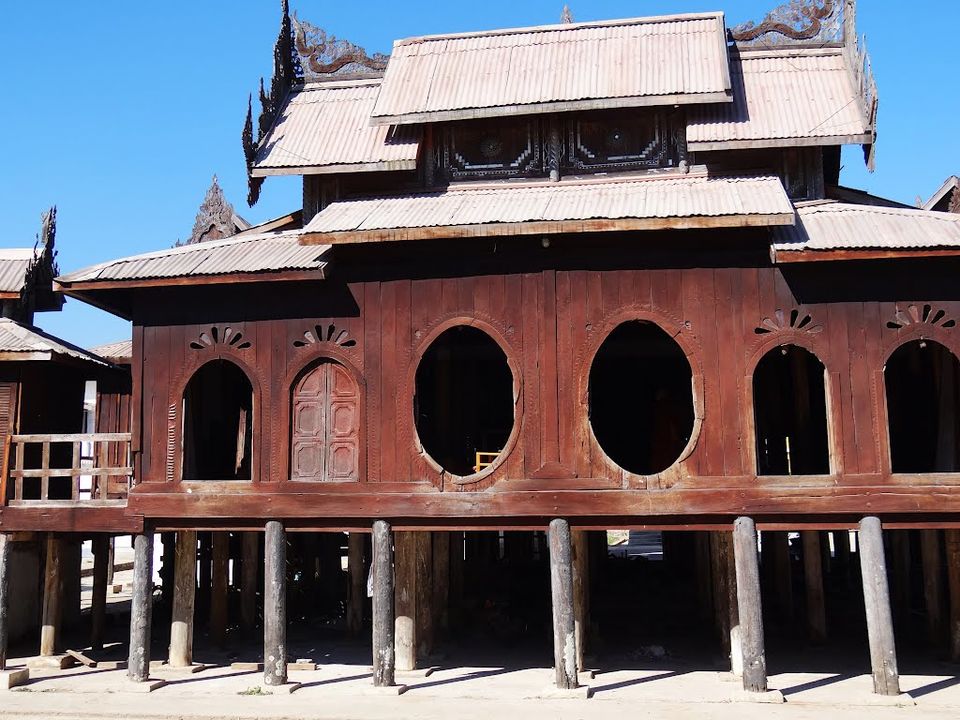 Myanmar is not for tourists. It is for travelers. This second largest country of South East Asia is easily missed by many tourists. It is not a country that you would just chance upon on your travels. It is a country that you will have to meticulously pick and be determined to explore. Myanmar is quite a difficult country to travel to, the transport routes here don't help much and region has seen some political turmoil in recent years, some of the reasons travelers scare away from this place. Having said that, Myanmar also has an untouched culture, a gorgeous landscape and some of the most awe-inspiring Buddhist stupas. That is Myanmar. It doesn't make it easy but, it surely make it worthwhile.

Compared to its tourism heavy neighbors like China, Thailand, Laos and India, Myanmar is much quieter. That is the best part about this country. It is not smothered by the grasp of mass tourism and hence has a vivid, raw beauty, something that is rare to find in the other South East Asian countries that have been massively commercialized. Another amazing thing about Burma is that is doesn't have much influence from western cultures. Myanmar has let its own culture thrive and the locals here have their own unique way of life that is inspired by their ancient traditions and values. Their language, their clothing, their norms are very much authentic. Although, there is a bit of an influence of the British, since Myanmar was a British colony till 1948. In fact, most of the towns here resonate a strong colonial identity. It also has some of the peculiar South East Asian features of Floating Markets, stupas (Owning to its majority Buddhist population) etc. Myanmar is for enthusiastic explorers, for there is so much here that hasn't been touched, seen, done. This trip is about discovering Myanmar, unplugged.

This trip covers the three major areas of Myanmar- Yangon, the largest city in Myanmar, Bagan and Inle Lake.

HotelsMap
I landed at the Yangon Airport. Yangon is the largest city of Myanmar, and there is much to do here so I decided to save it for the last. After spending the rest of my day in the hotel we left for Bagan the next day. We did Yangon full justice as our last stop at the end of the trip. 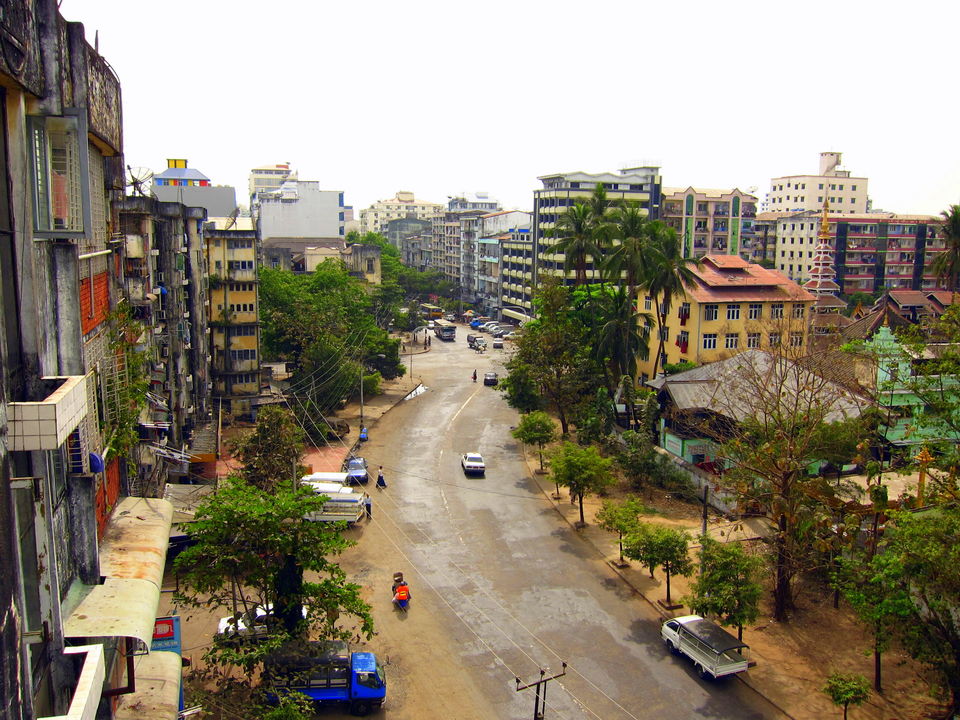 HotelsMap
After reaching Bagan the next day, we spent the rest of the day exploring the scenic countryside. Bagan was the capital of the Kingdom of Pagan, the first empire of the modern unified Myanmar. The region literally has thousand of monasteries and temples that belong to the 11th and 12th centuries. The Bagan Archaeological site is extremely popular with tourists flocking to visit it. It is as great as the Ankor Wat in Cambodia. 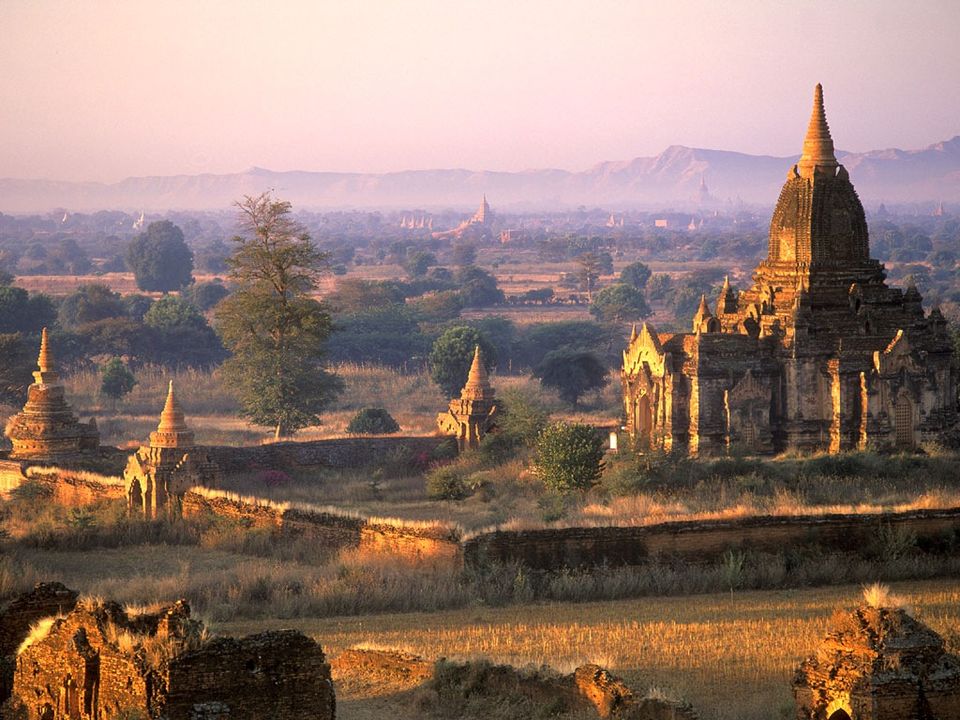 HotelsMap
The next day was set for a visit to the various amazing temples of Burma. Shwezigon Pagoda is the most elaborate and popular one. Built in the 11th century, it is of great religious significance for Burma as it was used as a prototype for all the other monasteries around the country. Made up of sandstone blocks and plate with gold, this pagoda lights up fantastically at night. The most famous feature here is its huge "Golden Bell." The Khay Min Ga are a group of temples, also built in the 11th century and display great architecture and provides a perfect spot for a panoramic view of the entire area. 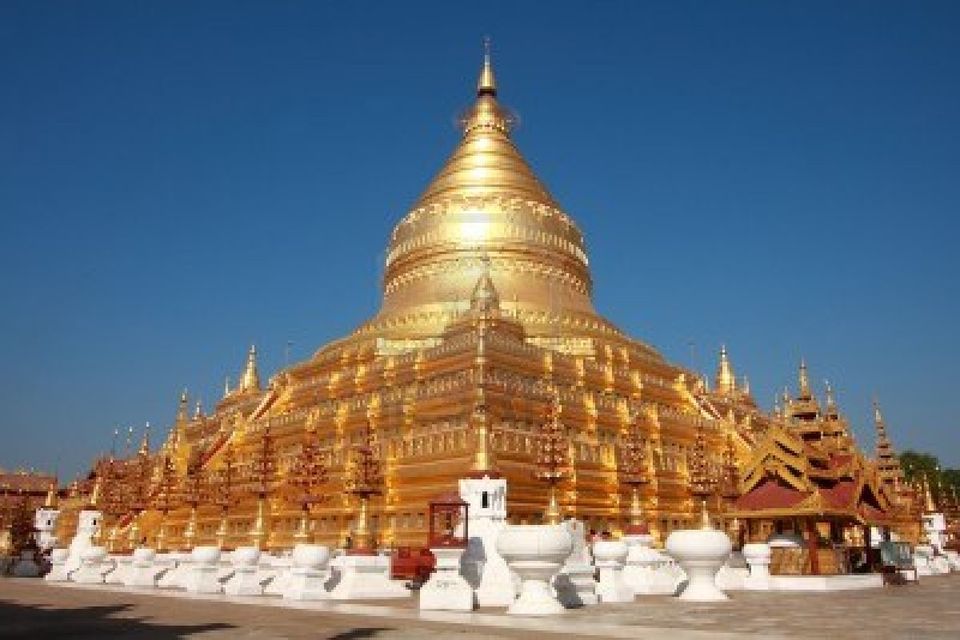 HotelsMap
Next is the Ananda Temple is titled the "Westminster Abbey of Burma" and displays a fusion of Mon and Indian type of architecture. This temple is the main attraction in Bagan. Ananda Temple is like a museum. You can study all kinds of Myanmar arts here — architecture, stone sculpture, stucco, glazed plaques, terra cotta, wood carving, artwork of blacksmith etc. After this, we proceeded to the Myinkaba village to buy local handicrafts made by artists. then followed a visit to the Manuha temple, built in the 11th century in Mon style by King Manuha and the Nanpaya Temple, a unique sandstone monument which according to legends used to be palace site of the King Manuha. 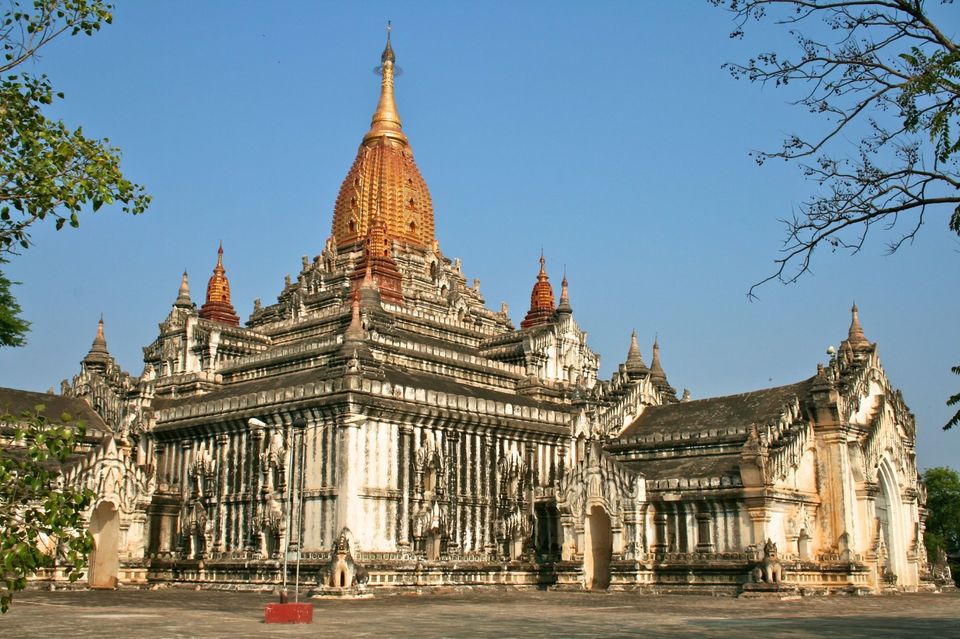 HotelsMap
There are three main temples near the Min Nan Thu village in Bagan. Tayoke Pyaya, Phaya Thonzu and the Nandamanya Temples. All of these are built in the reign of King Anawrahta Theravada in the 13th century. All the three are known for their exquisite mural painting and the elaborate frescoes the adorn the walls of the temples. We then headed to the Kat Kan Cave monastery, a great place to relax and mediate. We also met some locals in the farming villages around Bagan to get an insight into their lives and their culture. An interaction with the locals is a necessity to understand the culture of Myanmar. 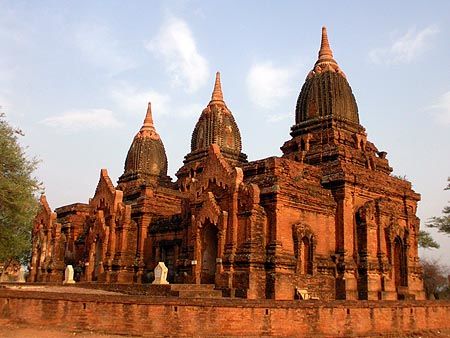 HotelsMap
Nyangshwe is a small touristy town north of the Inle Lake. There isn't much to do here in terms of sight seeing (except a few pagodas), so the main essence of this town can be experienced by just roaming around the streets and interacting with the locals. On our way from the Heho Airport (traveling via plane), we visited a paper factory and the Shwe Yan Pyay, a teak wood monastery built in the early 19th century. The amazing oval windows and the richly decorated mosaics and Golden ornaments make this monastery stand out among the rest. 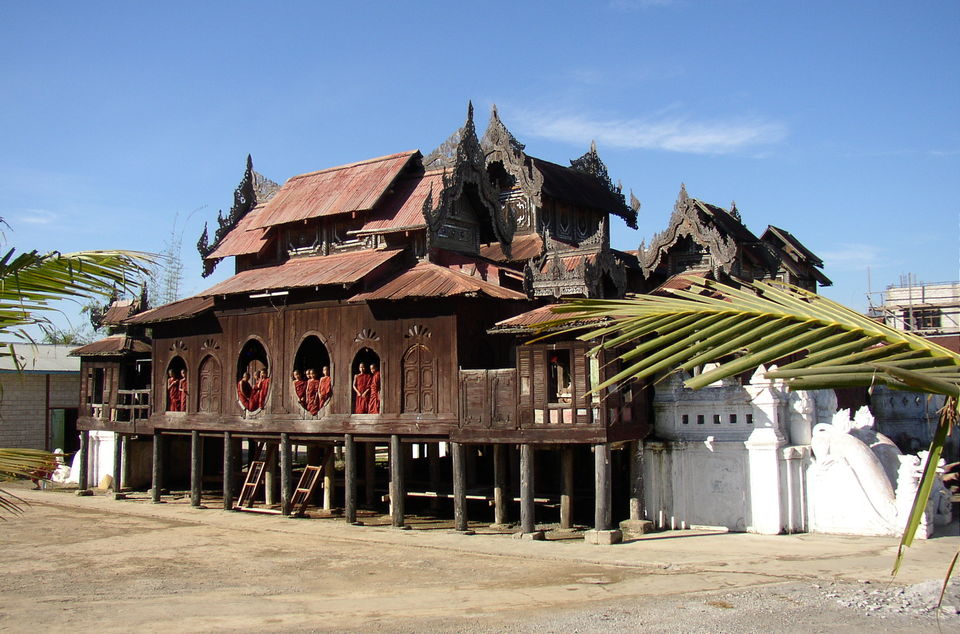 HotelsMap
This freshwater lake is among the top tourist attractions in Myanmar. Situated among the Shan hills, this lake is surrounded by 17 villages with local fisherman (called Intha), providing a great peek into the culture. You can take a boat or motorized canoes around the lake and explore it's serene beauty. The floating gardens make this make even more picturesque with green patches of flora adorning the lake's surface. The lake also has a number of endemic species of aquatic fauna. You can also find small floating markets on the lake. Not as grand as other S.E.Asian Countries, but a great view into local artistry. Later, we ventured to the much unexplored area of the Dien village along along a small river flowing into the Inle Lake. We came across a hidden pagoda complex and spent some time with the local Padaung women of the fisherman community around the lake. 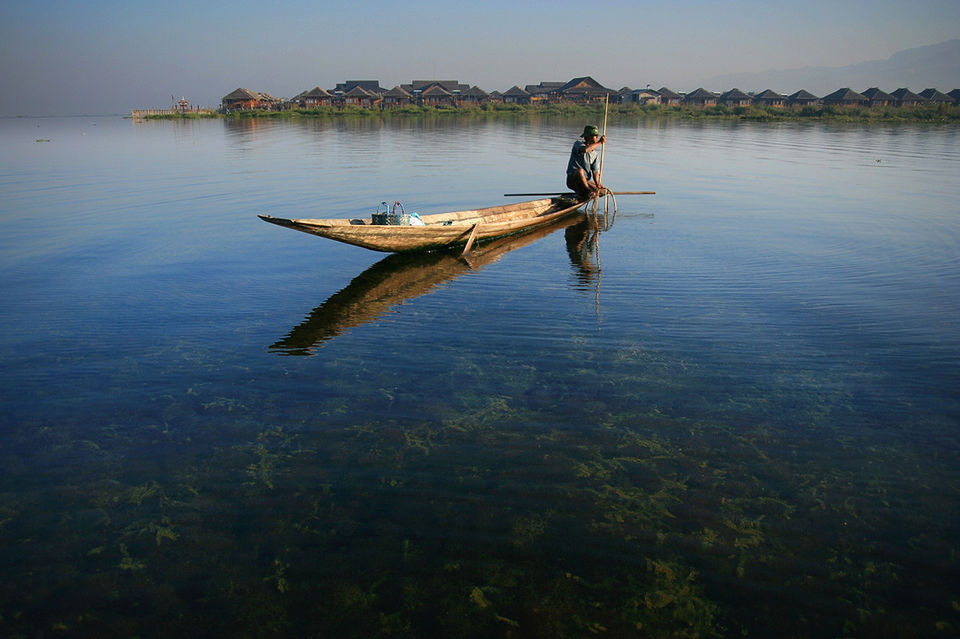 HotelsMap
Finally arriving at our last destination and the largest city in Myanmar- Yangon. It was the former capital of Burma and has a good number of buildings belonging to the British colonial era. The reclining Buddha at the Chauk Htat Kyi Pagoda is a 6 storey high Buddha image.The Reclining Buddha image is decorated with very expressive colors, white face, red lips, blue eye shadow, golden robe and red finger nails. He is wearing a Golden robe and is resting his head on his right hand. The Buddhist worship the statue, while the tourists are filled with awe by the magnificence of it. 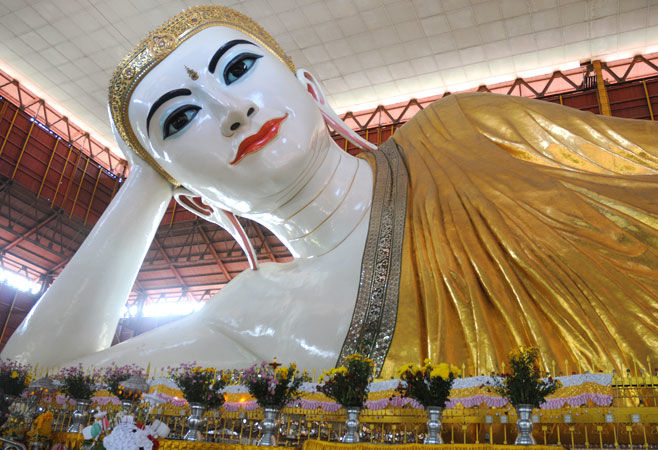 HotelsMap
This is one of the two major lakes in Myanmar and is referred to as "the great royal lake." The lake provides a great view especially of the Shwedagon Pagoda, located on the eastern bank of the lake. The Shwedagon Pagoda or the Golden Pagoda dominated the skyline of the city as well as leaves quite a clear and beautiful reflection in the Kandawgyi Lake. This pagoda is one of the most sacred places for the Buddhists with the relics of the previous four Buddhas in it. The pagoda has several stupas made from different materials: gold, silver, tin, copper, lead, marble, iron, and brick. The main pagoda is gilded with gold along with the 86 stupas surrounding it. Thousands of diamonds and other gemstones were used to decorate the pagoda. Myanmar is known as the "Land of Golden Pagodas" and Shwedagon is one of the reasons why. Even though the stupa has been repeatedly plundered over the years, it has been able to maintain its glory. 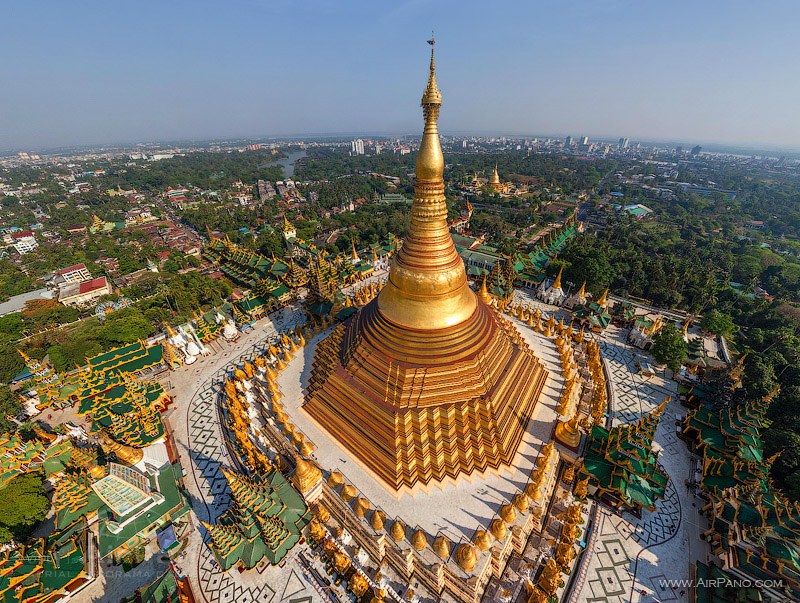