Israel Travel GuideIsrael TripsPlanning A Trip To Israel? Here Are 10 Things You Need To Know

Planning a trip to Israel? Here are 10 Things You Need To Know 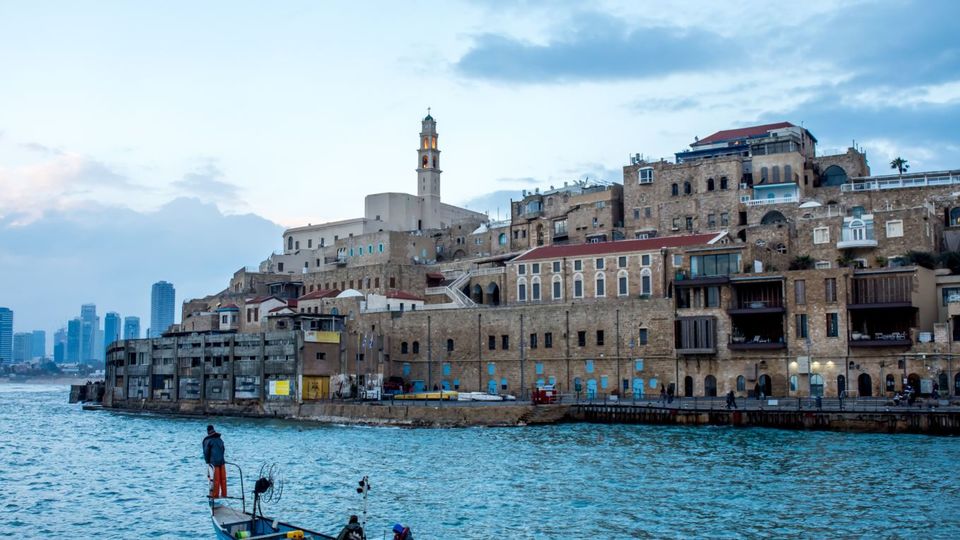 Israel is a destination that is sure to intrigue you in many ways. Not an easy choice for a regular traveler of course, you need to be a tough nut. A land locked country between two major seas - the Mediterranean and the Red Sea, this West Asian country shares a history that is an epitome of religious, social and cultural diversity, resilience and strength.

The land of Jerusalem and Bethlehem and the birthplace of Jesus, Israel shares a unique set of experiences that is not usually on the itinerary of a regular tourist. Planning 'your' trip to Israel? Here are 10 things you need to know.

If I have to delve briefly over the background of Israel, the foundations of this country are no different from India, excepting one- The ownership of territory. Whereas India has been the victim of invasions on its own soil, Israel had to choose another soil altogether for their settlement.

Israel was founded over the backdrop of ethnic disparity enforced upon them during and much before WW-II, which led to the formation of a separate Jewish state in the heart of the Arab land. In fact, the only thing that motivates their people to technological developments is the constant and never-ending rivalries from their aggressors.

It is always an ironic reality that the places of religion surround themselves with the maximum disputes. Each struggles to establish a permanent and complete identity through its followers despite the knowledge that this quest has no end.

Despite their daily struggles, Israel is a country blessed with rare and unparalleled natural beauty that is sure to keep you hooked up all the while. The Holy Land has surely its own set of blissful experiences that flocks in people from all over the world.

However, if you plan to explore North and Central Israel, you can choose between Haifa and Tel Aviv based on convenience. In that case, you can fly into Israel via Haifa and fly out from Tel Aviv once you finish exploring the Northern and Central Region.

But, if it is the Central and South Israel on your mind, then the best way is to fly in and out via Ben Gurion only.

2. The Best Time To Travel

Check out the 2019 Festival Calendar.

3. The Tourism Duration Is Short - Avoid travel after August.

The entire country keeps mourn to commemorate the Six Day War also known as the "Yom Kippur" War. It has a deeper cultural importance for the natives and almost the whole of Israel shuts down momentarily during this time.

In case you still intend to plan your trip during this time, it is a good idea to first read and understand about the events and then plan it out. I read about the "Yom Kippur" war in the bestseller "Mossad" by the author duo Nissim Mishal and Michael- Bar-Zohar where they have pointed out the explicit details leading to the events and how it changed the course of history for the country.

4. Plan your excursions with an agency registered with Israel Tourism Department

Although I have always advocated planning your trips yourself, you can always entrust some part of the planning unto the local hands. There are various advantages of taking that option. First, it saves you the time and effort in planning and most importantly, it prevents you from landing yourself at places where you do not want to.

The country has done its best to safeguard its interests from the neighborhoods, and one of the ways it does so is protecting its tourists.

The disputed areas are closer to the West Bank and Gaza strip. Thank fully, these are locations far away from the main tourist attractions and the Tourism Department can help you to take the right way to explore them.

Hotels in Haifa:- If you intend to explore the North of Israel, the best place to stay is Haifa, from where you can connect easily with Nazareth and Bethlehem of Galilee.

Hotels in Tel Aviv: - If you are planning to visit the Central part of Israel, Jerusalem and Qasr-Al-Yahud (The Baptist Site of Jesus), Tel Aviv is the best option to take. Tel Aviv is the commercial center from where one can have access to all directions to travel across the country.

Hotels in Jerusalem:- If exploring the completer Old City along with the Baptist site is on your itinerary, then the ideal way is to check out from Tel Aviv and station yourself for a day or two at Jerusalem. This can let you explore Jerusalem and the Baptist site over next two days.

Hotels in Eilat: - The South of Israel is dotted with some really exotic beaches. You will be able to explore them best if you can place yourself in Eilat area.

Another best option is to stay in Jerusalem, which is in close proximity to the Ben Gurion International Airport.

At its heart, Tel Aviv is a kind of city that awakens as the evenings set in. While you are here, buckle up for the excitement that begins late in the evenings and runs through the next day. There are various ways to explore Tel Aviv City. You can get aboard a bicycle and drive past the gorgeous lanes or simply connect with its local heritage one at a time. 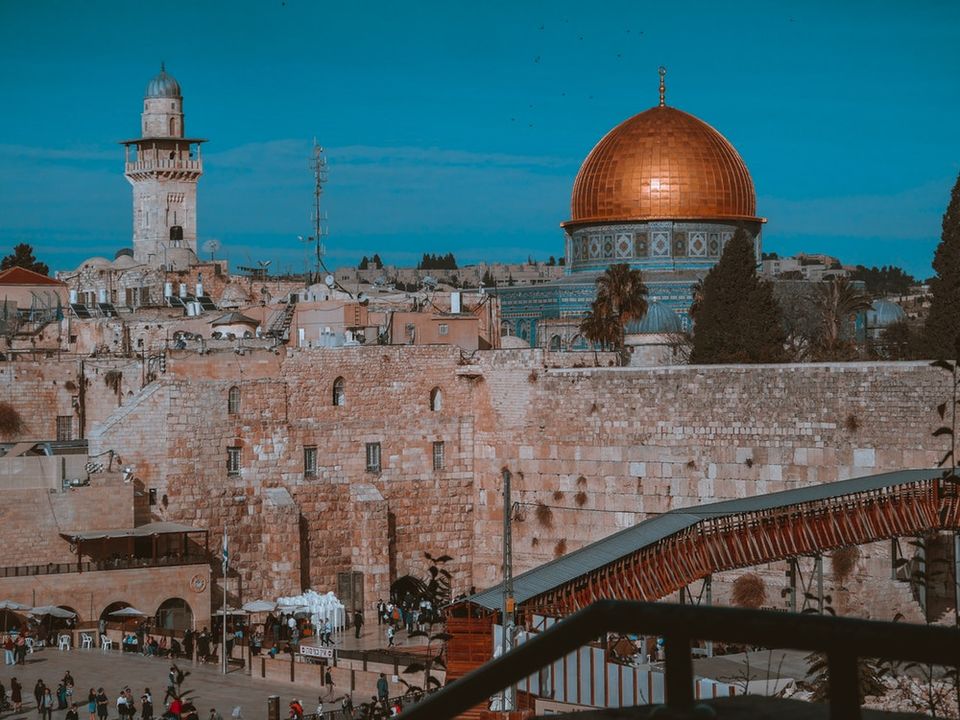 Jerusalem, a city where history and spirituality walks hand-in-hand! Walk past the various gates of the Old City and the enormous Western Wall and experience the beauty of the majestic Temple Mount at the center of the City. 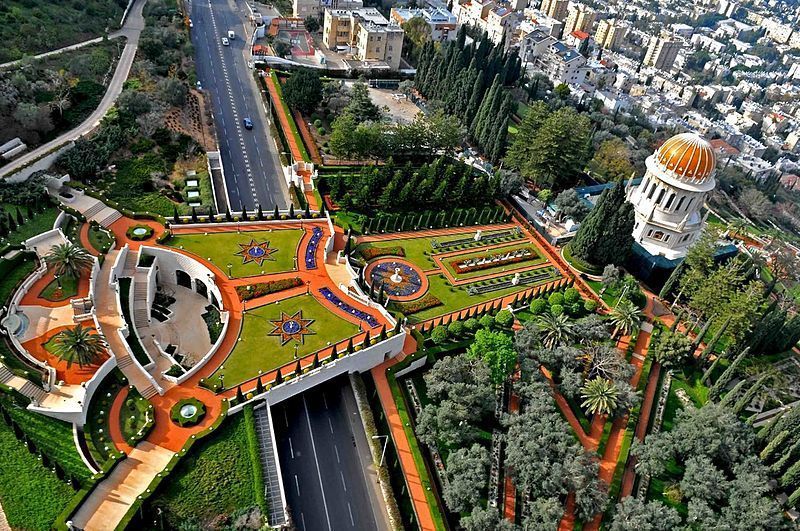 Haifa is among the most developed metropolitan cities in the world, the second-largest in Israel. Engulfed into Mount Carmel, the city gives a spectacular view of the Mediterranean coastline on one end and the alluring architectural marvels of the city on the other. Haifa also has a Baha'i Temple, just like other parts of the world, including, New Delhi, India.

Escape to North Israel and delve deeper into the cultural roots of Israel, with a trip to Haifa, Nazareth, Galilee, Golan Heights and the Sea of Galilee. Witness the lowest freshwater lake on earth- the Tiberias. You can get the best view of the lake from the picturesque grasslands of Golan Heights. 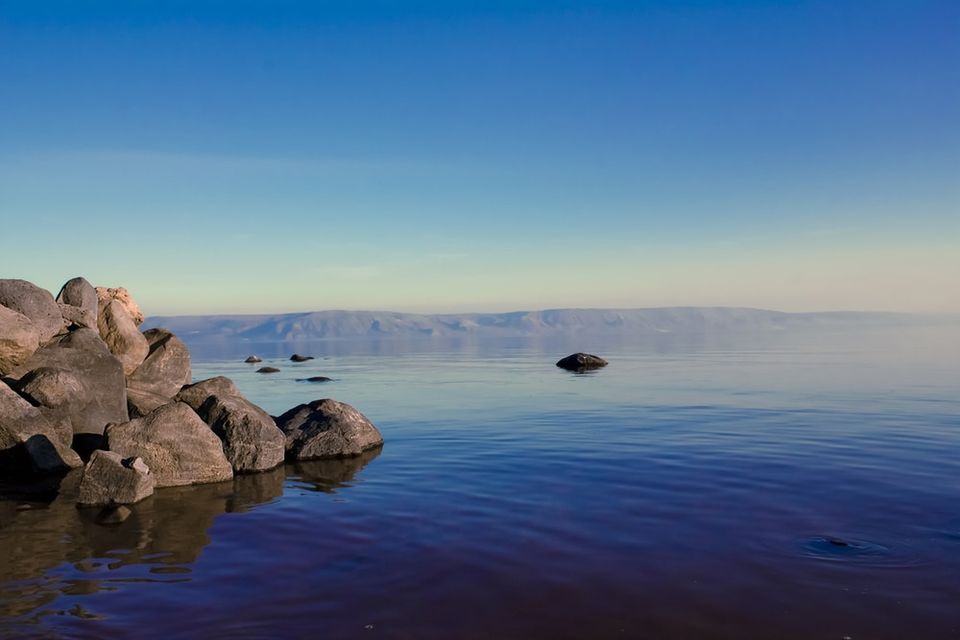 If you are traveling to North Israel, you want to take your time to explore it.

Sunset on the Negev Desert 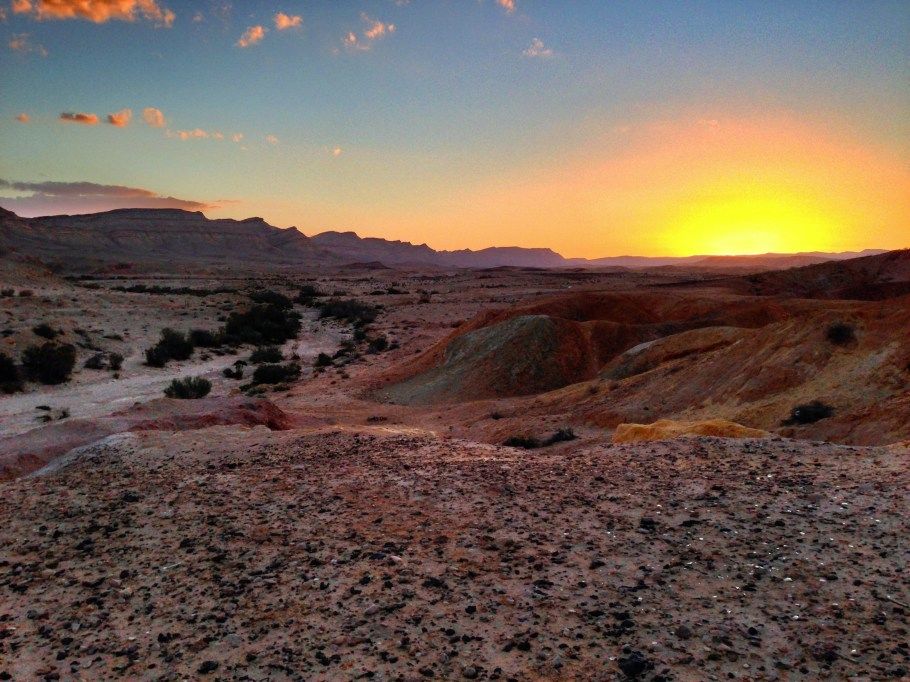 The Southern part of Israel takes you on the journey of Dead Sea where the laws of nature seem to defy themselves along with a visit to the rocky plateaus of the 31 st Century Masada fortifications.

Negev desert, the 4500 square mile desert is about more than half the area of the entire country of Israel, and is famous for its unique vineyards grown in this region for centuries. If you are lucky, you can befriend with the Bedouins (the nomads) of the region, a minority population in this area. Negev is a major contributor to solar energy to the rest of Israel.

The Eilat district is dotted with some of the finest beaches overlooking the Gulf of Aqaba. It is also home to iconic coral reefs such as the Eilat Coral Beach Nature Reserve and Dolphin Reef. The Lagoona area will connect you with the Secret Yacht clubs of the Eilat region. The entire area is flooded with options for water sports such as diving clubs, scuba and snorkeling, lagoon exploration, yachting. 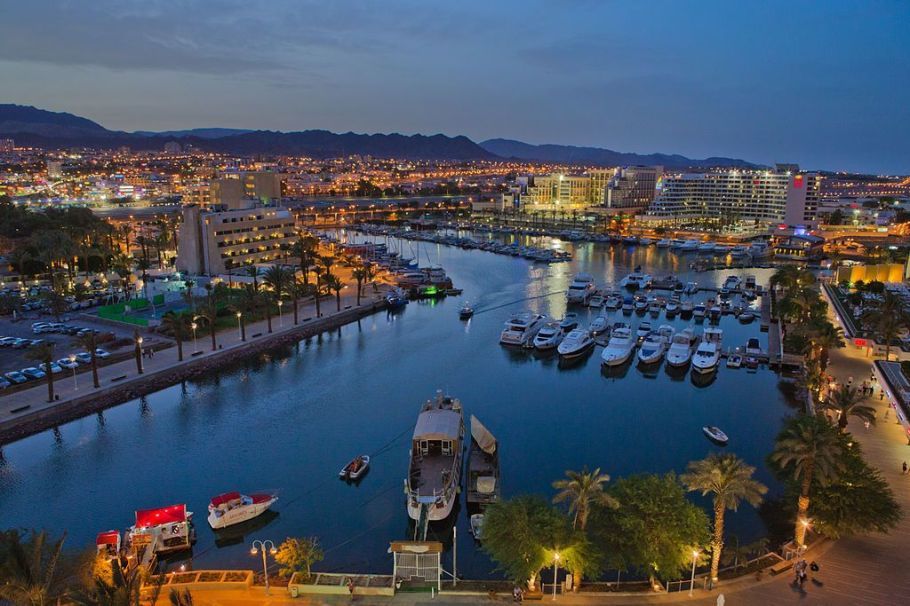 5. Beyond Israel - Petra and Wadi Rum 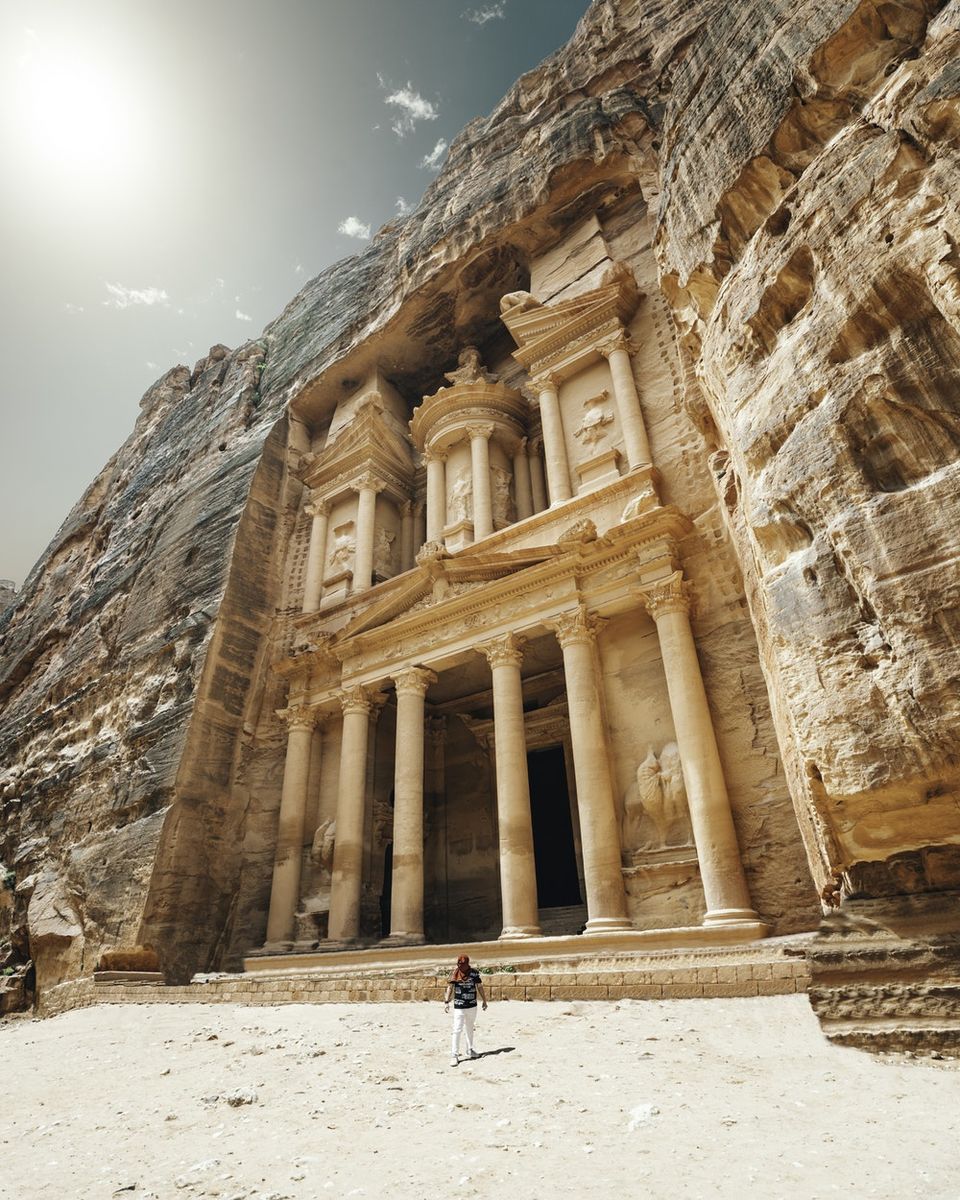 While you are exploring the South of Israel, Jordan is not very far from reach. You can hop into the neighboring Jordan to the ancient city of Petra, and Wadi Rum and Wadi Mousa City.

If you are planning your trip in advance, it is a great idea to research forex before closing the deal. You can also get into an agreement with your bank where you hold a bank account to serve you with the Forex Card before your travel.

Since you are looking for the best rates, you need to know that the Foreign Exchange is a volatile market and it fluctuates almost every day. When you negotiate with the banks, you should first check for the present day exchange rate before asking for an exchange as you might be charged with a 'flat fee' rather than variable one. 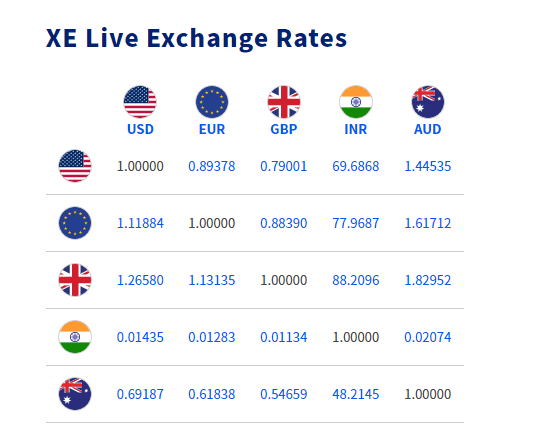 Due to the volatility of the currency market, chances are that you find the exchange rates lower on a particular day or a series of days. This is the time when you should consider an exchange with the bank.

A platform such as www.xe.com allows you to check the live currency exchange rates which you can use to determine the forex value before exchange. Avoid exchanging at airports as usually, they exchange it at a higher rate than the banks and secondly, they do not issue valid receipts for such exchanges.

On 8th Jan 2018, the Govt of Israel further relaxed the Visa requirements for the Indian travelers. The Visa for Israel for Indian travelers is usually available from four centers - Delhi, Mumbai Kolkata and Bengaluru. You can also opt for a 48 hour fast-track visa.

A single tourist visa costs INR 2760/-. The processed Visas can be couriered to your address at an additional fee of INR 461/- (including service taxes) per application. The visa processing takes minimum 5 days and maximum up to 15 days. You should follow up with the respective embassy offices in case you are yet to hear about your visa status after 15 days time.

Check out the list of documentation required and processing fees below.

I have covered very little about Travel Insurance in my earlier posts as I have honestly traveled to destinations where investing on travel insurance is of little value except for air travel.

When it comes to a country such as Israel, it is a good idea to consider a travel insurance that can cover you for unwanted contingencies, should there be any. You can use the various Insurance aggregation websites to compare the prices offered by the various Insurance companies. A typical travel insurance starts from as low as INR 250 per person and can cover one or more of the following:-

ii). Claim in event of death

iii)Claim in event of accident

Israel definitely is not for everyone and you must know how the situation is before you make your plans to go there. While the security arrangements are tight at the prime tourist locations such as the airports and transit areas, it is always a good idea to stay updated and aware about the local situation.