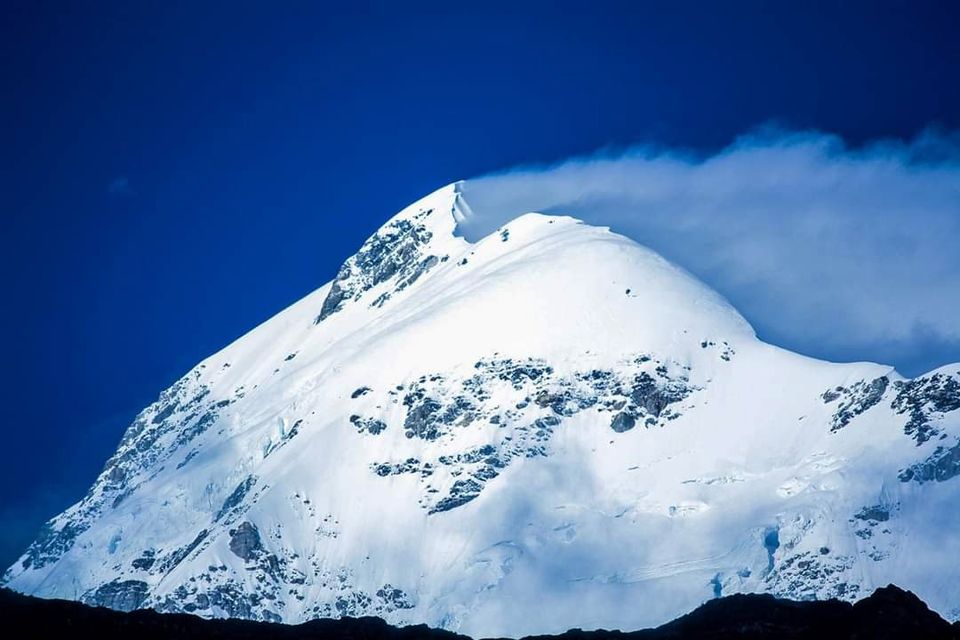 Travelled from Bengaluru to Delhi and then from Delhi to Kathgodam. We reached around 5 in the morning and started to our base camp at Lohajung. 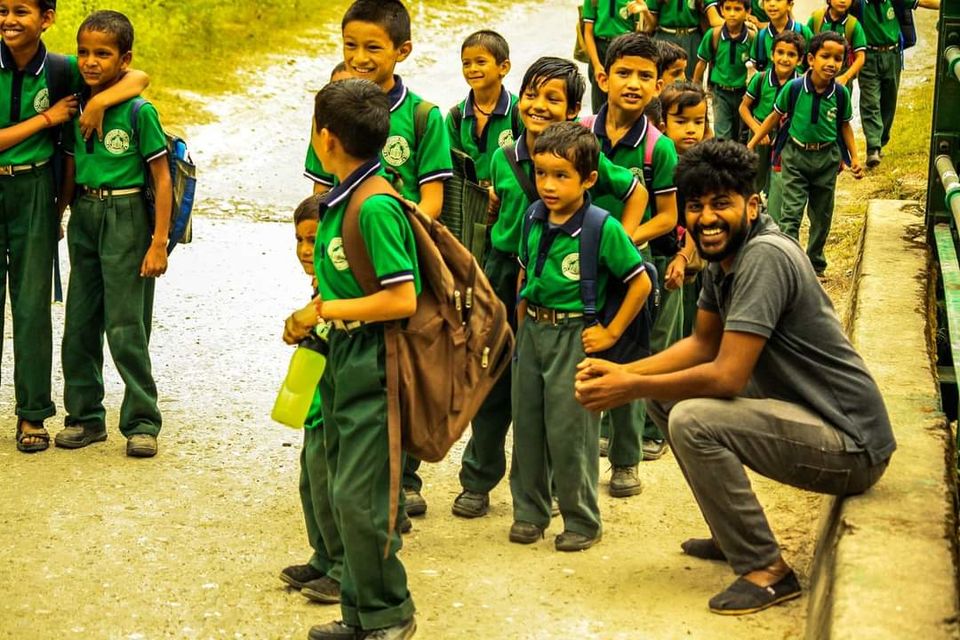 It is a 10-11 hour journey from Kathgodam to Lohajung. Read in detail about getting to Lohajung here. After a glimpse at Tharali, the sight of Mt Nanda Ghunti welcomes you to Lohajung. A village with wonderful views of Didina valley, Lohajung is a nerve centre of 12-15 villages. 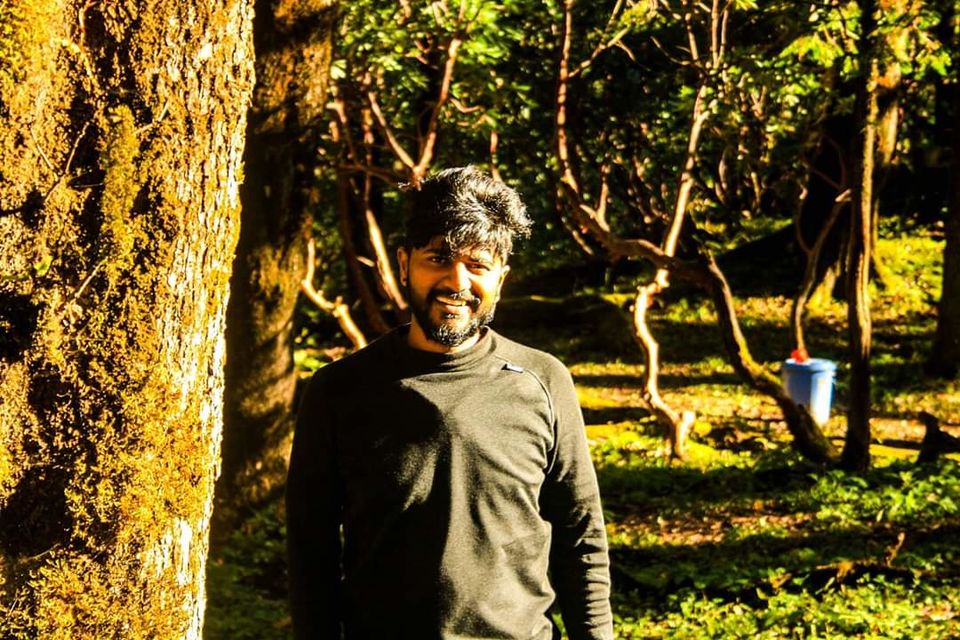 Start from Wan, a village situated at an hour’s drive from Lohajung. The initial trail is cemented and through a cluster of houses. 15 minutes into your trek, you will find a cluster of centuries old Cypress trees. It would take four people to circumvent the tree! Try hugging it.

From here, there are two trails you can spot. One goes straight ahead to ridge. The second one acts as deviation to Latu Devta temple. Latu Devta is a local deity, who is believed to protect the area. It takes 30-45 minutes to ascend from Wan to Ranaka Dhar. At Ranaka Dhar, take in the view of Lohajung, Wan and the valley below! The name Ranaka Dhar comes from the battle Parvati had with the demon Lohasur. Their battle, which started in Lohajung, culminated here. The name Ranaka Dhar means “flowing blood”. 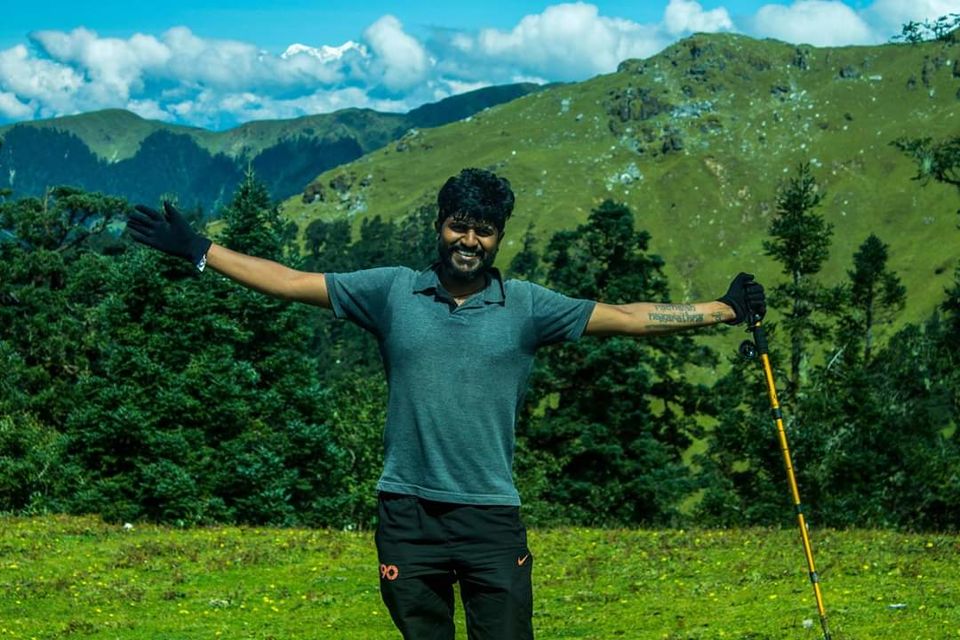 The trail begins to climb steeply into an oak and rhododendron forest. And after half an hour of ascending stoned steps, the trail opens up to a huge meadow. Take the trail to right that will take you to Ali Bugyal.

The forest starts to thin after about 1½ hrs of climb (make it 2 if you are slow). Suddenly, abruptly, the oak and Rhododendeons fall behind you and stretched in front of you is a largest, greenest rolling carpet ever laid out for you. You’ve arrived at Ali Bugyal.

All tiredness forgotten, soak in the mesmerising sight of the undulating meadows of Ali Bugyal. You are on the top of a ridge that spreads in every direction – acres and acres of green meadow scooped out of the mountainside.

Clouds drift in from below, glide over the ridge and slide down the either side, all in a slow swift motion. You watch countless horses grazing on the bounty of nature. Foals tear themselves across the turf in an uninhibited abandon. 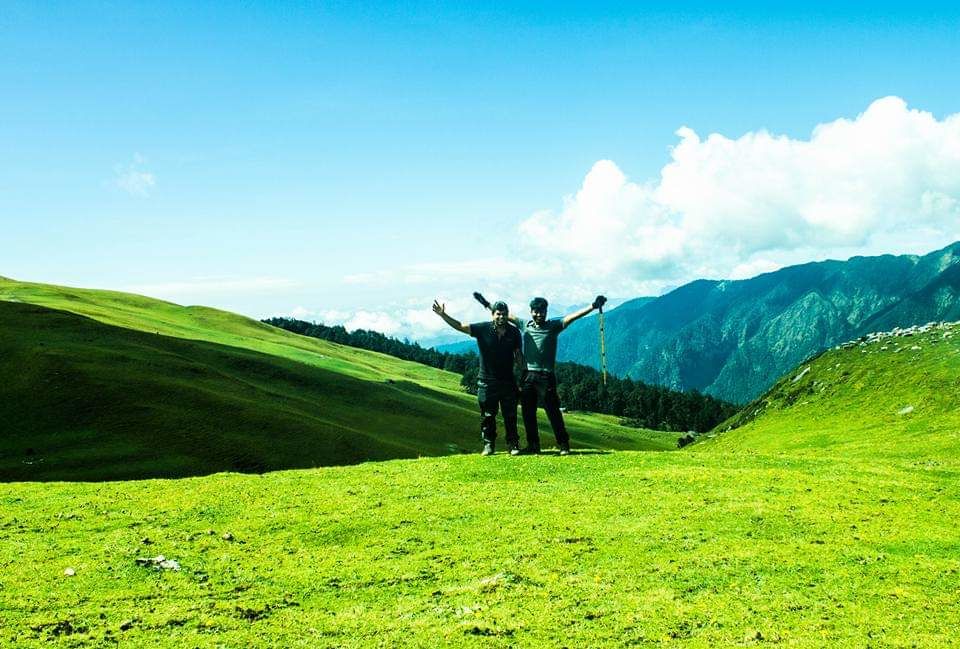 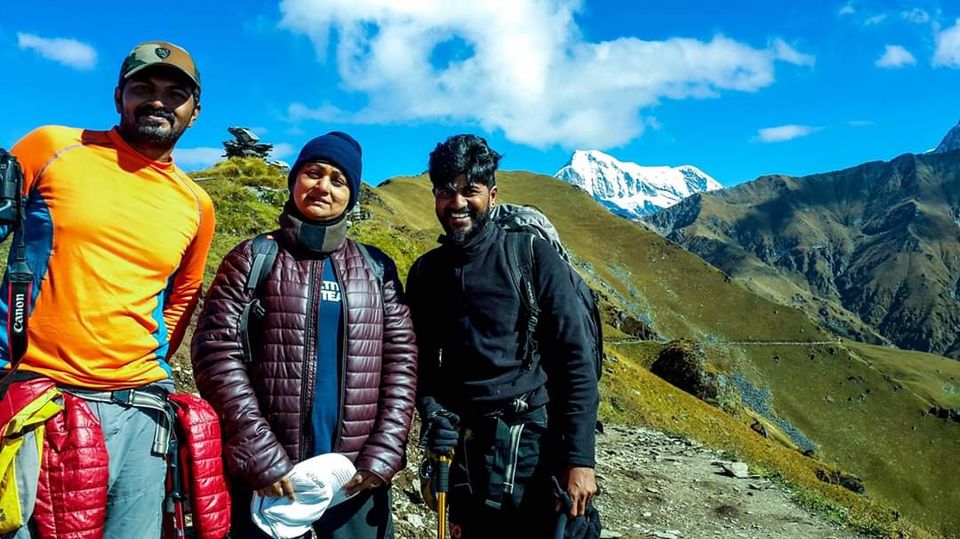 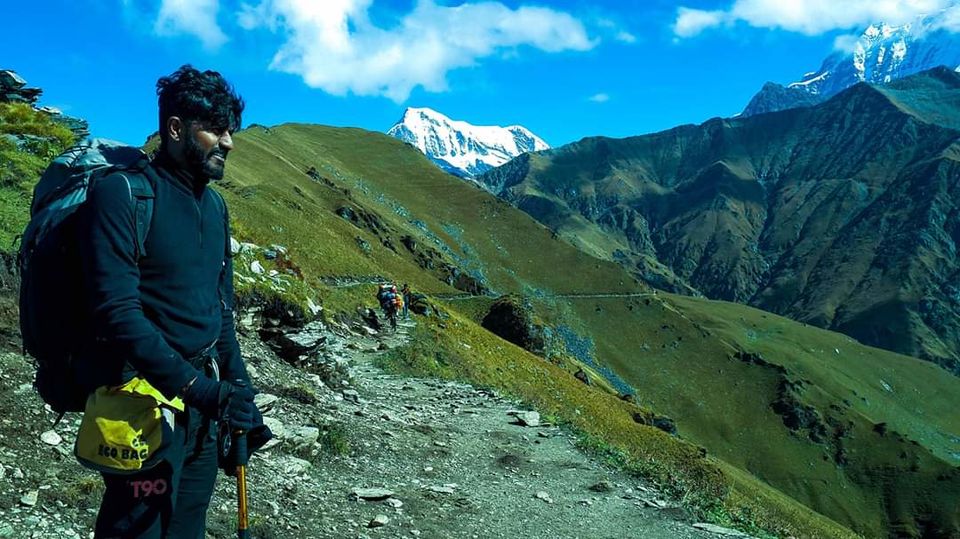 The trail to Patar Nachauni climbs out of the Bedni campsite in a gradual, easy meander. From your Bedni campsite you can follow it with your eye for 3 kms before it disappears into a saddle in the mountain.When you cross the saddle, the trek exposes you to the other side of the ridge. The scenery is differently mesmerizing. For the first time you also see remnants of the winter snow on the mountain flanks (on the other side). 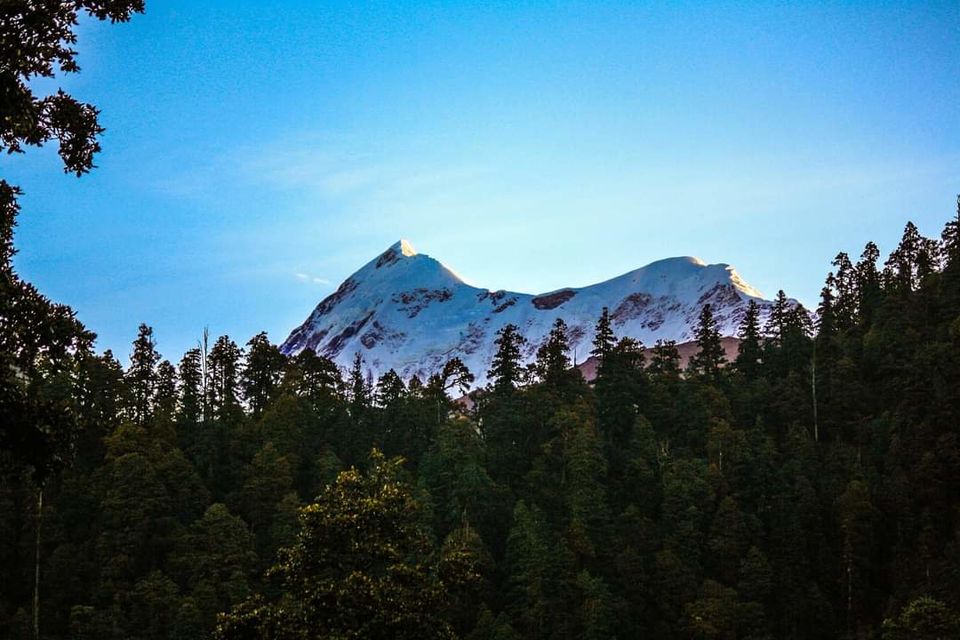 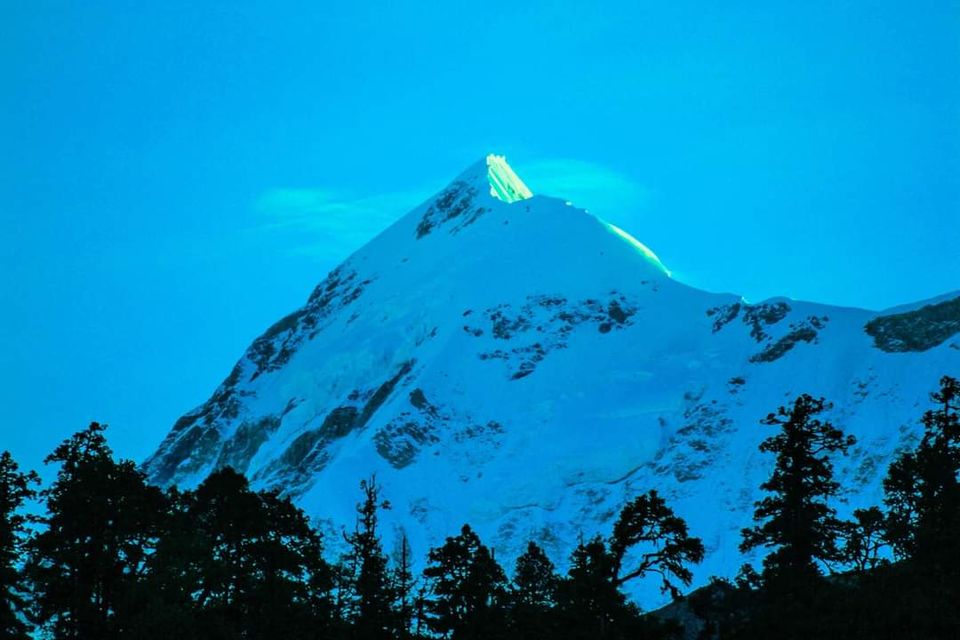 The climb to Kalu Vinayak is a steep zig-zag up the mountain side and will take you to 14,500 ft. The distance isn’t much, and the zig-zag trails makes you gain height very rapidly. Climb this section very slowly. There really is no hurry and even if you are the slowest on the team you can reach Bhagwabasa in comfortable time. Take 10 minute breaks every 15 minutes. This is a crucial height where most trekkers feel the thinness in the air. You get breathless very soon and sometimes even feel dizzy. This would be okay if you did not have to do the Roopkund climb the next day. Most folks climb this section like any other climb and find it difficult to acclimatise to the Roopkund altitude later on.

Treat this section as the most crucial bit of your trek. In climbing time it takes around 1½ hrs to climb to Kalu Vinayak. Stretch it to 2½ hrs, even if you can climb quicker. By doing this, you’ll find your body adjusting to the increased height and the lack of oxygen. Climbing to Kalu Vinayak is a thrill and every time you look up and take a bend on the trail, the ridge line gets closer, drawing you, inspiring you. Around you are the green, sheer mountainside. Below, you can follow the trail that you took from the first saddle over Ghora Lotani and finally to Kalu Vinayak. 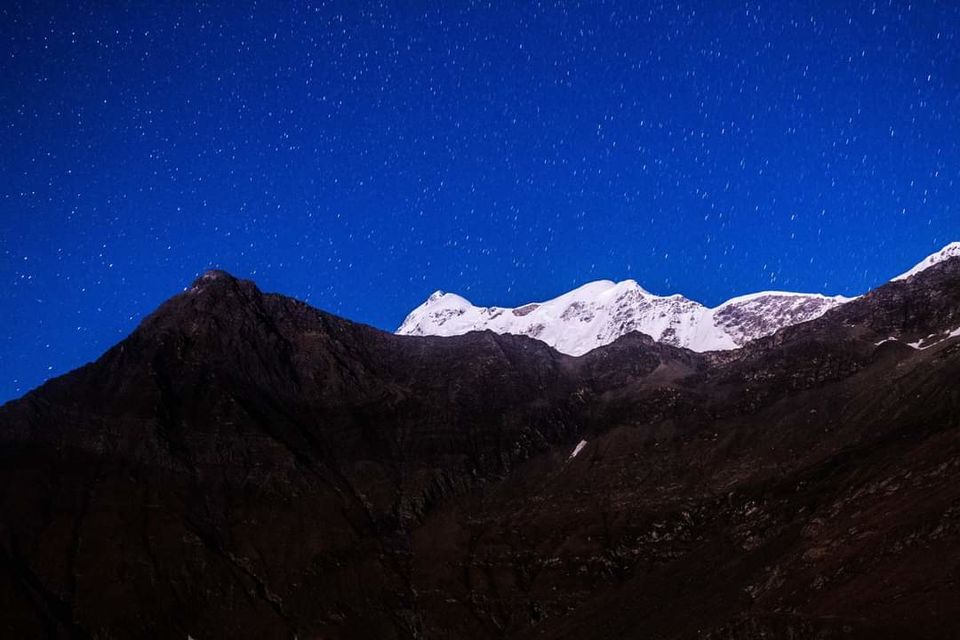 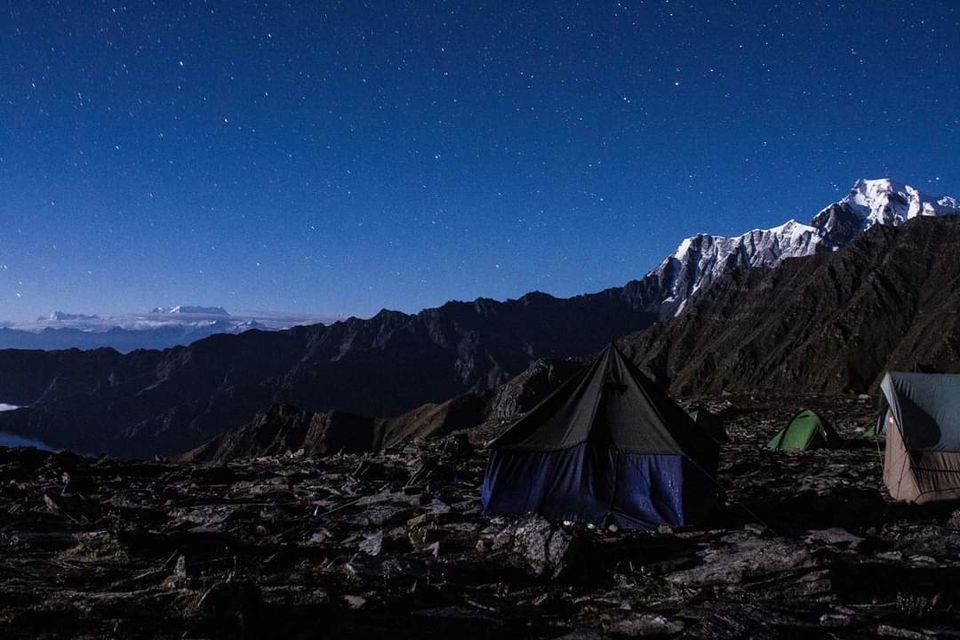 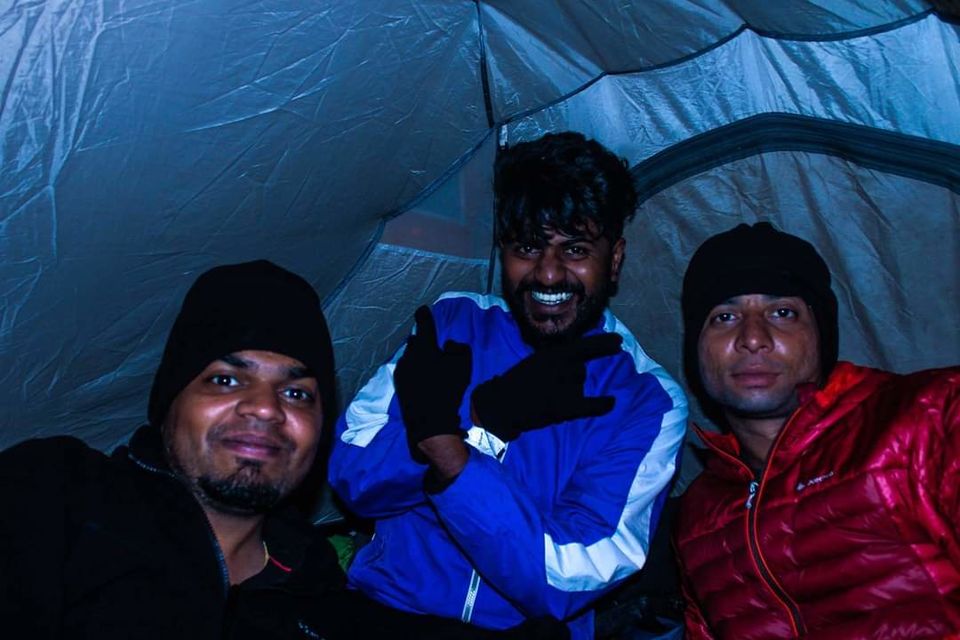 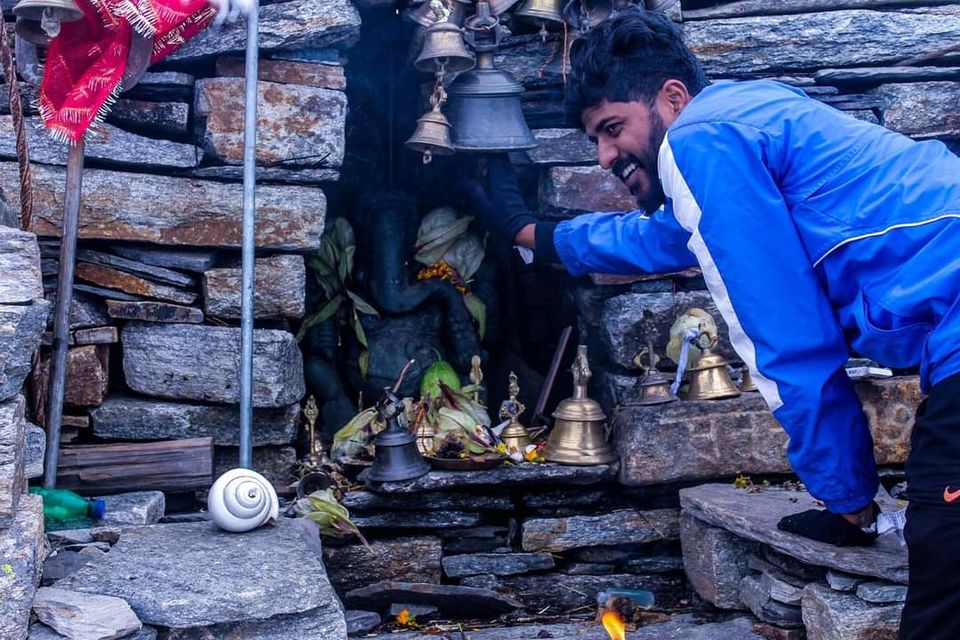 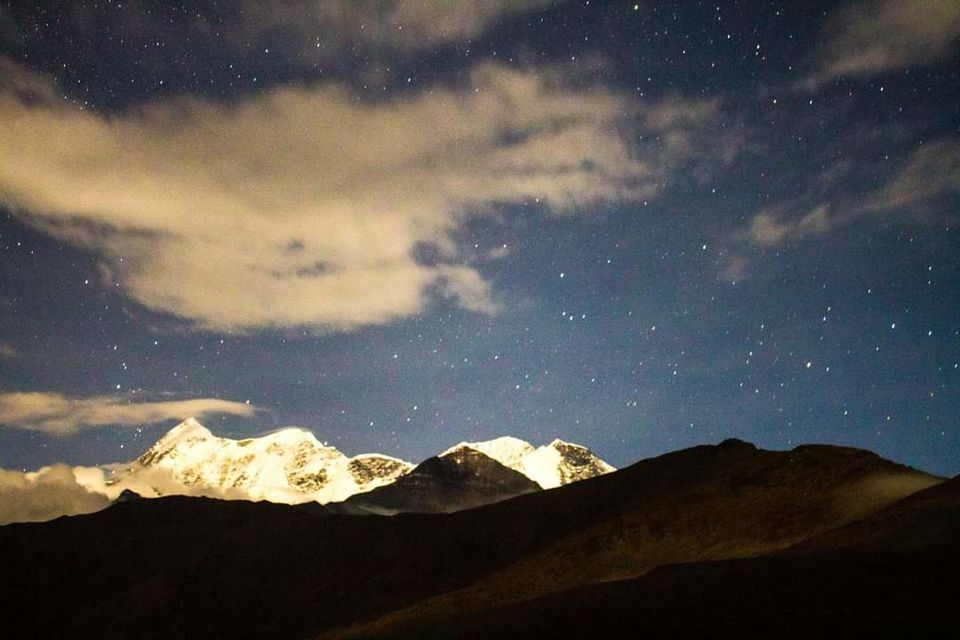 At Bhagwabasa, nights turn extremely cold. Inside tent temperatures dip to 1°C. Outside measured at -2°C at 2.30 in the night. These are mid summer temperatures. In September-October temperature will dip further to -5°C or -6°C. Bhagwabasa is windy too. In the wind chill the -2°C feels like -6°C. You need to put on all your warm clothing and then get inside your sleeping bag to brave the night. 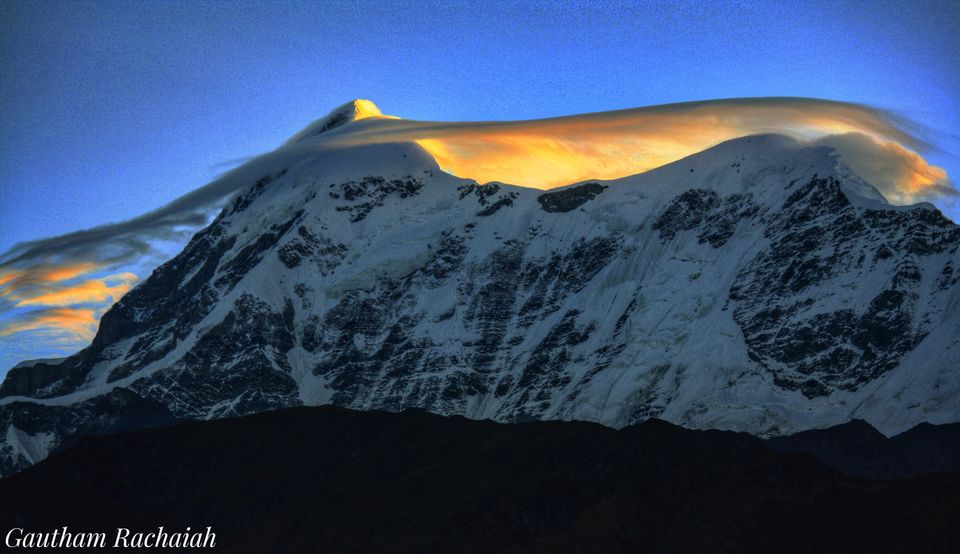 From Bhagwabasa it is a 5 kms gradually ascending walk to Roopkund. Towards the end the trail climbs sharply through a series of switchbacks and a steep climb over a snowy flank to reach Roopkund. The stretch isn’t long, but the entire stretch is on snow patches. At some parts the slope is steep but most parts are easily trekkable. Those trekking alone need to carry ice-axes to cut steps on the snow. It takes about 2½ hrs to climb up to Roopkund. Ideally, if you have started at 5.00 am then you are going to get to Roopkund by 7.30 or 8.00 am. The climb is deliriously exhilarating. The last stretch of climbing over the snowy flank on the left requires support of all four limbs, but is over in 10 mins. Roopkund is right over the edge, two minutes away and yet you can’t see it unless you get there.

Roopkund is a crater on the mountain face, a dip at the cusp of the mountain. It is much bigger than what most internet pictures suggest. All around are snowy flanks of the mountain. You have to actually climb down 50 ft to reach the edge of the lake.  GPS readings suggest that Roopkund is not more than 15,750 feet. Whatever the altitude, you will feel the thinness of the air. Climbing a few steps takes your breath away.

The Roopkund Mystery: The “skeleton Lake ” has intrigued anthropologists, scientists, historians and the local people ever since. Who were these people? What were they doing in the inhospitable regions of the Garhwal Himalayas? Local folklore has it that in medieval times, King Jasdhawal of Kanauj wanted to celebrate the birth of an heir by undertaking a pilgrimage to the Nanda Devi mountains in the Garhwal Himalaya. However, he disregarded the rules of pilgrimage by boisterous singing and dancing. The entourage earned the wrath of the local deity, Latu. They were caught in a terrible hailstorm and were thrown into the Roopkund lake! 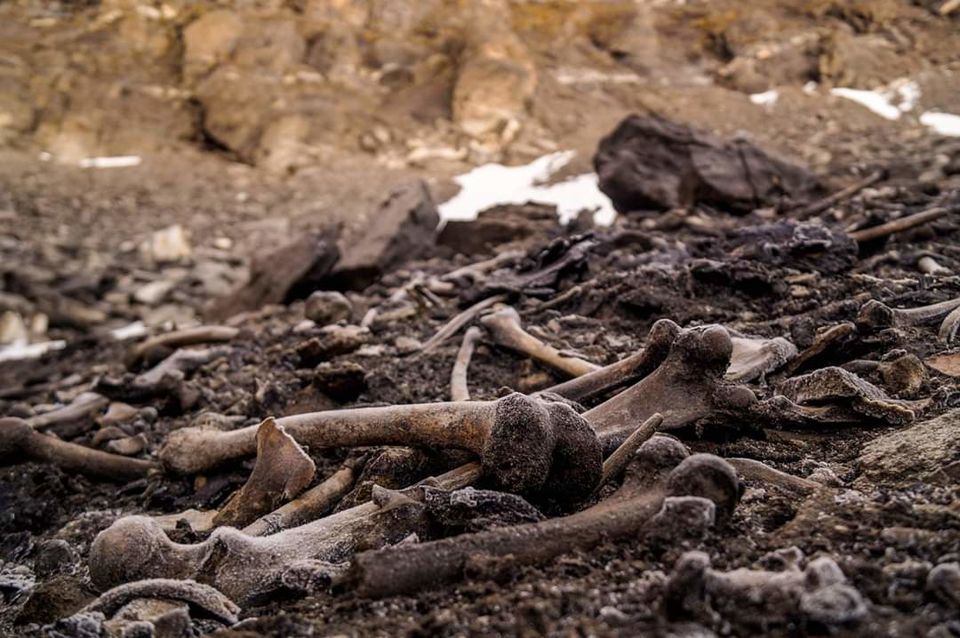 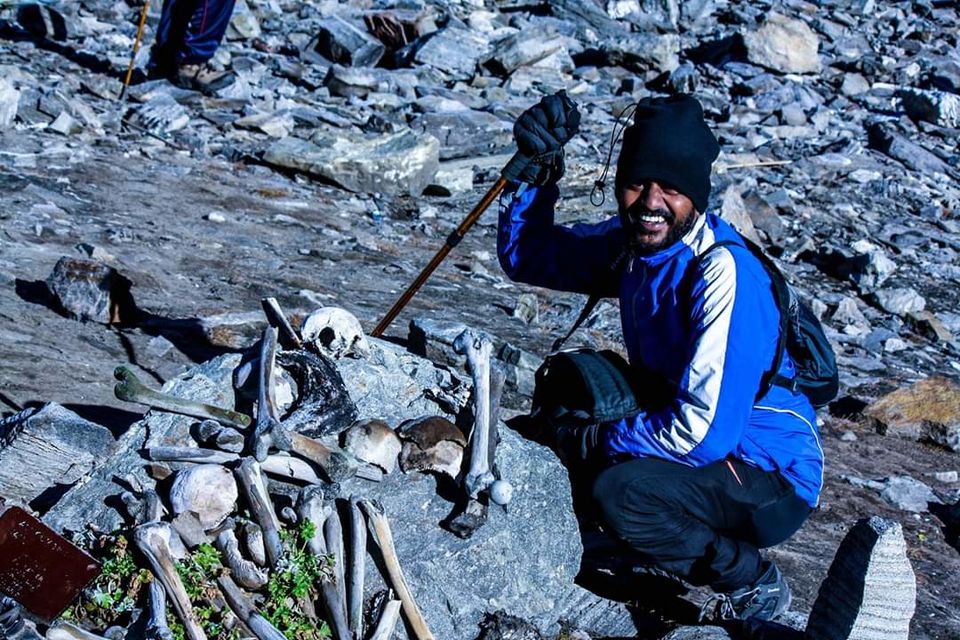 Trekkers must attempt Junargali unless the weather does not permit it. From Roopkund, the sharp ridge line that towers above you is Junargali. It doesn’t take much time to get to Junargali. The route is over snow that gently inclines upwards until it reaches the face of the mountain. After which it is a steep clamber on the mountain face to reach Junargali. The climb isn’t for long; perhaps 250 ft. It gets over in perhaps 15-20 minutes. Care must be taken while you are climbing to Junargali. A rope with you is very handy. 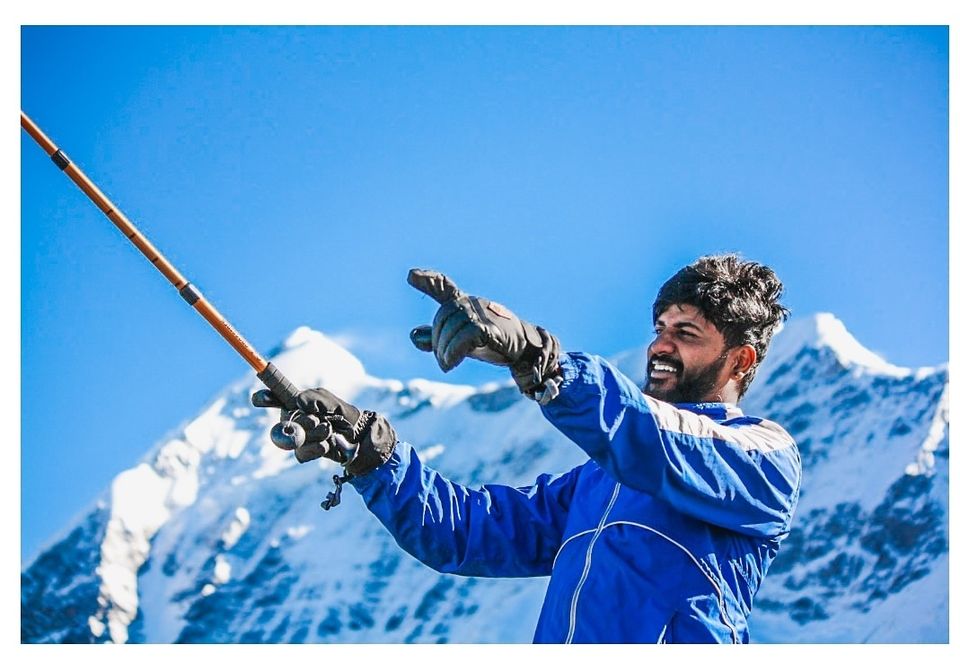