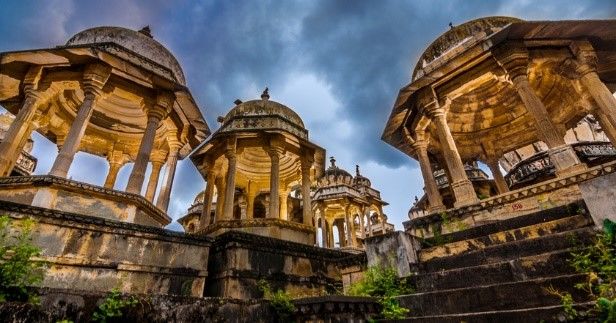 Udaipur’s magnificent lakes and palaces have contributed so much to its elegance and splendour. This ‘Venice of the East’ has enthralled tourists from all over the world with its old-world charm and exquisite architecture. Lake Pichola, City Palace, Jal Mandir, Bohr Ganesh and Amba Devi temples, Lake Fateh Sagar, and Bagore ki Haveli are some of the prime tourist attractions of the city.

In fact, the city has enough tourist spots to keep you busy throughout your stay. Local guides, cab services, and hotel concierges are available to help you customize your tour by suggesting places to visit in Udaipur.

Not quite as well-known as the other Udaipur tourist places are the Ahar Cenotaphs. Quaint, serene, and slightly outside the main city limits, a trip to this place is especially interesting for those who appreciate history and architecture.

Situated about 3 km from Lake Pichola, you may need a vehicle and some directions to get there. The place is open on all days between 7 am and 4 pm except Sundays.

What are the Ahar Cenotaphs?

The Ahar Cenotaphs are memorial monuments built by the royal Maharanas of Mewar to commemorate their ancestors and their families. It is a burial ground for members of the royal family or the erstwhile Maharana rulers dating back to the 17th century.

Around 250 cenotaphs were sculpted over 350 years, of which 19 are for the Maharajas. The name of each king is inscribed at the entrance of each cenotaph.

The cenotaphs are open-air dome structures with supporting pillars, built on a flight of steps to provide the perfect elevation. Beautiful carvings adorn these structures. Made from marble, the cenotaphs are called ‘chatris’ in the local language. They are of various shapes and sizes, which vary depending on the status of the person buried in them.

The signature style of the dynasty is imprinted in the form of a four-headed Shiva carving in each of these dome structures.

There are several entry points to the Ahar Cenotaphs. At one point, several cenotaphs surround a well. The mastery in craftsmanship to sculpt such a large cluster of domes with immense precision and dedication commemorating the departed souls is nothing short of spectacular – so much so that one might wonder why this scenic spot is so underrated. 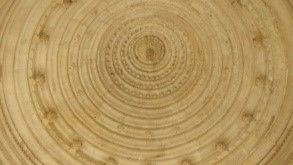 There are no entrance fees or guides disturbing the peace at the Ahar Cenotaphs. One may think being in a burial ground or cemetery might be uncomfortable, but these cenotaphs, on the contrary, leave one in awe.

Spending some quiet time here can be a sublime experience. It is the perfect spot for historians, artists, philosophers, and writers to immerse themselves in quiet reflection and gather their thoughts.

Though not immaculately maintained and in slight disrepair, one cannot overlook the grandeur of these structures. Restoration work is being carried out, however, to preserve these architectural marvels.

After visiting the rest of the tourist spots in and around Udaipur, head to the Ahar Cenotaphs early in the morning. There is no prohibition on photography here, so click away to your heart’s content and make some beautiful, tranquil memories.

A word from Club Mahindra Team :

There are various hotels spread across town. However, if you’re the kind who enjoys the finer things in life, opt for Club Mahindra Udaipur Resort in Rajasthan. Surrounded by breathtaking scenery and done up to reflect the royal culture, it provides every facility you would expect. Spacious and impeccably designed rooms will pleasure your senses throughout your stay.

This boutique hotel offers impeccable spa services to soothe your tired soul. Sign up for a signature massage at the resort and experience pure bliss. If you are an avid gym-goer who can’t bear to miss a session even on vacation, there’s a state-of-the-art gym waiting for you. And the in-house restaurant lets you enjoy the best of the local cuisine.

Club Mahindra Udaipur Resort is the ideal place for you and your family to stay in while in Udaipur. Browse through the various Club Mahindra reviews online and you’ll see why !

Inside Out with Rahul Yuvi : You Tube Channel