This article is to describe one such incident that happened in our Haridwar-Rishikesh-Mussoorie trip of 10 days.

It was the 4th day of our journey, we were in Rishikesh. We were heading to Neelkanth Mahadev Temple from Vashishth Guha and the distance was around 25 kms. It was already late afternoon and I asked my partner if we should postpone it to next day as it might get dark by the time we return.
She was adamant to go and so we rushed the hilly road to reach fast. We reached by 5 30 pm but the doors of the main Temple were already closed at 4 pm. Disappointment !!

Not knowing what to do we decided to have some snacks and leave. But, we got to know from someone that temple aarti would be performed at around 6 30 or 7 pm.
I made up my mind to leave but my partner got more excited to attend the aarti.
I told her that we shall leave now as it would get too dark by the time we leave after the aarti and it's not safe.
But, no effect. We attended the aarti and we left the temple by 7 45 pm.

Now, The Return Journey !!
It was pitch dark, chilly february winter weather, one scooty and the two of us.
There were few vehicles which started return journey with us but sooner or later they all disappeared.
We were driving cautiously as it was all hilly and jungle road with no street lights.
Now, my partner had tension written all over her face as we were driving down all alone in that black dark night. We were also shivering because of the chilly wind.
The journey continued as we drove down some 15 kms and then we saw the board - Laxman Jhula (4 km). We felt relieved as it was just 4 more kms to go.

With relief, comes joy. As I was driving and enjoying, I saw something in the dark, a little far,  moving from the centre of the road to the right. I told my partner, hey look, may be its a monkey. I slowed down the vehicle, moved it to the right side of the road, came close to that thing and put my vehicle headlight in its face.
It was not a Monkey !!

I looked into its eyes, it looked back in my eyes, I saw the spots on its back, I saw the tail.
Game Over !!

I raced the vehicle, didn't look back and silently shouted "oh shit it's a Leopard".
My partner, being on the back seat, she had her own visuals.

The next 5 minutes were something which we had never experienced emotionally. I was continuously blaberring something and my partner had killer chills all the way from her toes till her spine.
It was excitement, fear, surprise and horror; all together and we could not contain.

The animal was so close to our vehicle that it could have pounced on us in no time. Could be just some 2-3 feet away.
Luckily, the leopard didn't react and may be it went its way.

On one hand, it was me who is keenly interested in wildlife and who can binge on Discovery, Animal Planet or Nat Geo for hours. On the other hand, it was my partner who finds it difficult to even differentiate between a leopard and a cheetah. We both had different feelings for that incident.
But one thing is common, our minds are still not ready to register this incident in our memory blocks. Whenever we try to remember the incident, there is always a question mark. Did it really happen?
It was so scary that it feels unreal.

"An unexpected leopard sighting, all alone, in the pitch dark night, that look into the eyes, a couple of feet apart"
It can't be real !!

We came back to the ashram, scared and fearful; thanked God that we reached safely and our journey continued.

Somewhere, we both felt that it was Bholenath who gave us Darshan that night in the form of a leopard.
"Har Har Mahadev" 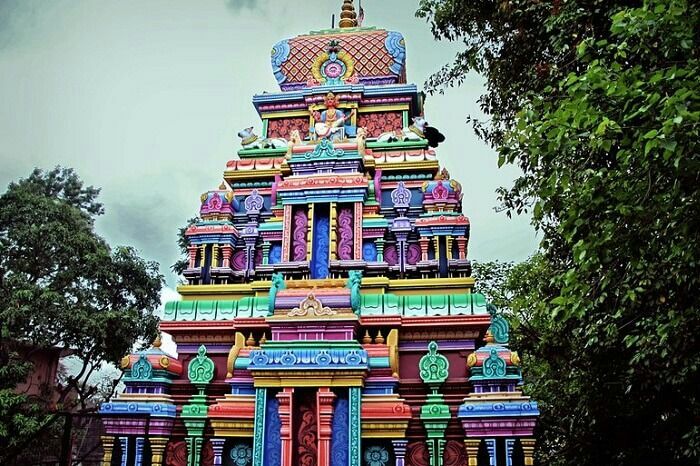