Experiencing Nainital in a day 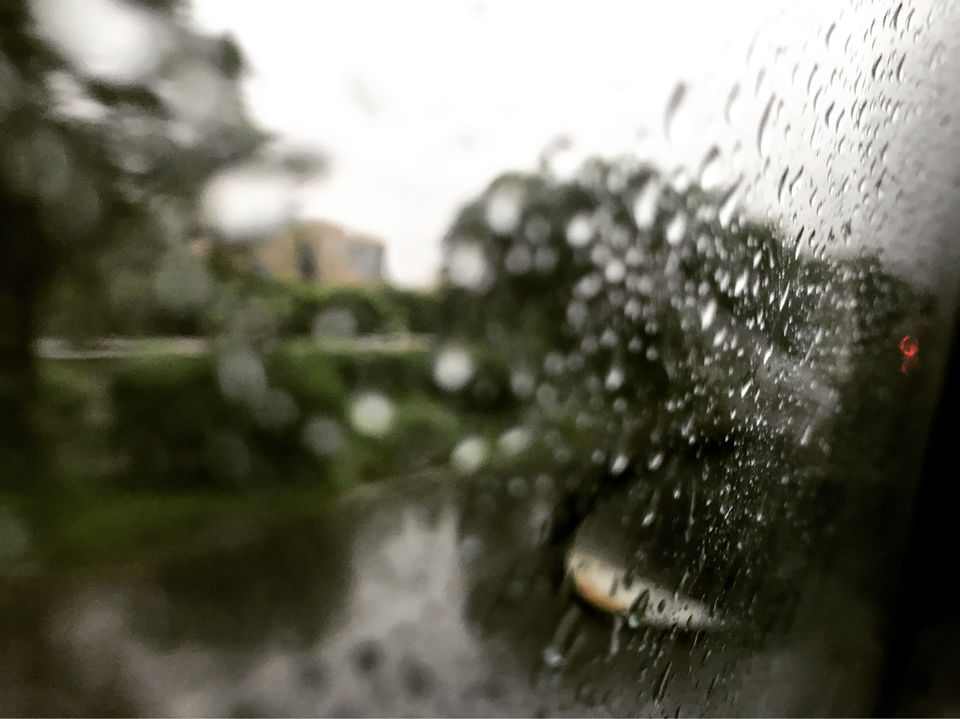 Nainital, a sought-after destination of tourists, is located in the Kumaon foothills, of outer Himalayas, in the state of Uttarakhand. It is believed that the Naini Lake is one of the 64 Shakti Peeths, or religious sites where parts of the charred body of Sati (Parvati) fell on earth while being carried by Lord Shiva. The spot where Sati's eyes (or Nain) fell, came to be called Nain-tal or lake of the eye.

Continuing our journey from Jim Corbett, it took us around 3 hours to reach Nainital. Google Maps suggested around 2 hours, but we didn't exactly have a beast of a vehicle (a CNG hatchback). My father, was a first timer, when it came to driving in the hills and it was raining heavily, specially in the last 20 kms, due to which we progressed slower but safer. Of course, we were took breaks for tea, clicking pictures etc.

Dad, the hero of our trip, had driven a lot by now & wanted to take in the pleasure of sight-seeing from a backseat. So we decided to park our car in the Nainital Parking Stand (see pic below).

At mall road, a bunch of people approached us to hire taxis or book a stay with their respective hotels. Some of them were rude & got pissed off for not taking their deal (so much for hospitality, meh).

If you preferred a comfortable suite with a nice view of the lake, you'd have options ranging from Rs 4500- 5,000/- for a suite. If you are bound by budget, or are traveling solo and stay doesn't matter much to you then cheaper rooms can also be booked for anything between Rs 1,200 - 2,000/-.

Most of the hotels are on mall road. No cars are allowed between 6-8 PM on the mall road, which leads to a peaceful walk/shopping experience.

We opted for a 12 point local sight seeing package with a cabbie. There was a costlier package of 5 point sight seeing (~2 - 3k) which covered the lakes around Nainital, like Sattal, Bhimtal etc. Though everyone jumped at this thought, we were constrained by time, & hence we gave it a miss. So, local sight seeing it was.

He was a funny guy & his laugh was contagious (on many occasions I laughed hearing his laughter :D. Do you get those moments, when you're actually infected?? LOL). He had an Alto, which has a better power to weight ratio than cars like swift etc. As tourism has grown, Innova & Alto(s) have made their presence stronger in the hills.

And so the sightseeing began. I will try to list the points chronologically for a better reference. I might miss one or two, like suicide point, etc. They all are the same in the scheme of things.

1) Snow View Point - The cabbie told us beforehand, that the snow capped mountains of the Himalayas might not be visible due to the clouds. Indeed, that was the case. Here, one could also have their pictures taken with stallions for a few bucks.

2) Mango Point - From this place, Nainital lake appears in the shape of a mango. The clouds just wouldn't clear & our patience ran out. It wasn't the season of mangoes anyways. Another 5 minute stop by and we moved on.

3) A cave - I'm not sure if this roadside slit in the hill, qualifies as a cave (definitely not what one would imagine, hearing a "cave") or not. Anyways, other cabs were parked here too, which validated that this was a sight seeing point too.

What's so special about this though? Apparently, you'd feel cold winds after climbing the top. As per our cabbie, it was an effect of a hole, somewhere within the cave, which led to winds gushing in from the other side. We did experience winds, not sure though if they were coming from behind us or around us. It was anyways windy :D

It made for some classic photos though.

4) Lovers Point - Not the typical place you wanna visit with your peers :D. But hey, I'm in love with the mountains, does that count?

By now you must be wondering, "hey, all the points look the same!".

Trust me when I tell you this, they sure are :D

5) Suicide Point: I didn't click a picture here as it seemed redundant by now. Also my phone was almost out of juice. All the points do look the same. I could post a random picture and call it a "suicide point". Would it make a difference? It wasn't exactly like the suicide point of "Kalpa, Himachal".

6) Khurpataal - Encircled by pine & old cedar trees, the noteworthy part of this lake is the shape of it, which makes it distinctive and also derives the name of the lake. Still can't guess it?

The lake is in the shape of cow's toes (Khur). Hence, Khurpataal.

7) Botanical Garden - A must visit place to soak in the beauty of flowers. It's still being developed & also has a room which showcases taxidermy of insects found in and around the foothills of Himalayas. Do check it out, if you're into all that.

A close capture of the flowers. Made the most of my iPhone 7's lens here with some great close up shots.

We were so tired from the journey & being in the cab since 5 AM that we had no stamina to climb up till the waterfall. I guess hunger was the bigger reason. We had lunch in a restaurant opposite the waterfall. Why was it commercialized though? That bugged me!

9) Nainital Lake - I know, I know. You waited long for this. Perhaps hit "CTRL + F" & scrolled down directly here? My apologies for the delay, but you see, I had to go chronologically. Now you are here though. Enjoy the view of Nainital in the monsoons my friends :)

Self paddle boats are cheaper if you want to opt for that & exercise your muscles. In no mood to even, spend another joule of energy, we at once opted for the other option.

Cost: Rs 300 (For half the distance of the lake. Mostly people opt for this. An extended experience will set you back by more).

Duration: 20 minutes (give or take)

This concluded our sightseeing of Nainital. We missed out on Tiffin top, I am not sure what was the reason though.

If you read various articles across internet, you'll find another point  which goes by the name: "The Flatts".

Let me introduce it to you.

11) The Flatts - A center for recreational activities. From time to time, various sporting events are organized here like cricket, football, volleyball etc. All cultural fairs and festivals are also organized here.

Our sight seeing was over in the expected time frame of 3 hours. It was almost 4 PM. Having no more major points to cover, we decided to head back to Delhi on the same day! It was going to be a hell of a ride back home. We reached Dwarka, around 1 AM thus concluding a wonderful roadtrip (covering Jim Corbett and Nainital) with family!

I'll carry my visit to Nainital, in my hearts forever.