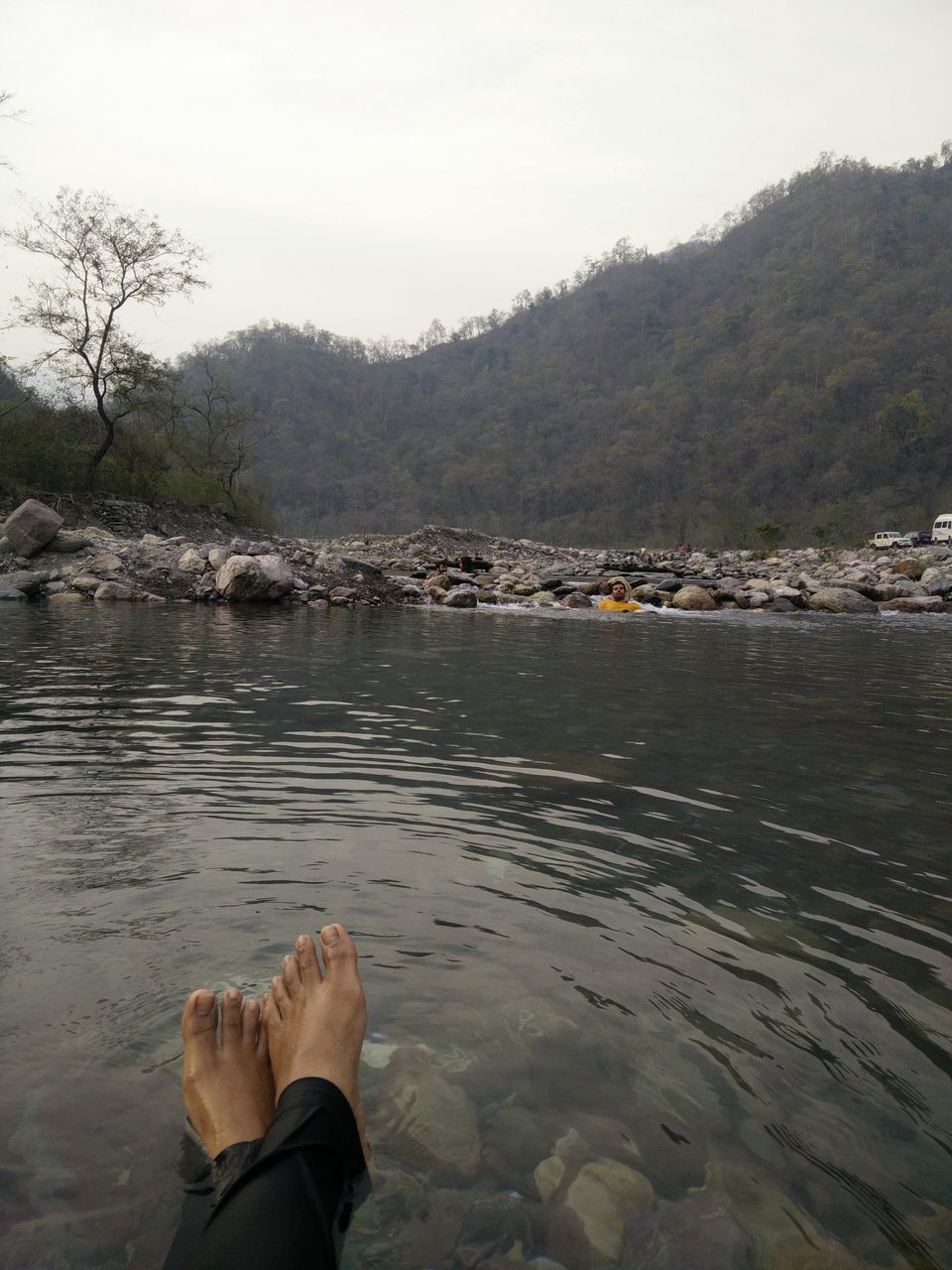 It was time for us to “seek out ways to make life better”!

Rishikesh is about 25 KM’s from Haridwar & without the traffic it is quite a smooth drive.

We headed straight for Shivpuri, which is ~15 KM’s from the main town. This is where we were supposed to be camping. We had got prior bookings done through “Wildhawk Adventures” (http://rishikesh.wildhawk.in/) and our camp name was “Riverzone camp”. We were charged INR 1500 per person which included – Lunch, Evening tea & snacks, dinner & bonfire, camping, breakfast & rafting. The arrangements were really good; people managing the camp were very nice & warm. It was worth the money.

The first sight of the camps, located next to a small yet glowing territory of The Ganges, was picturesque! 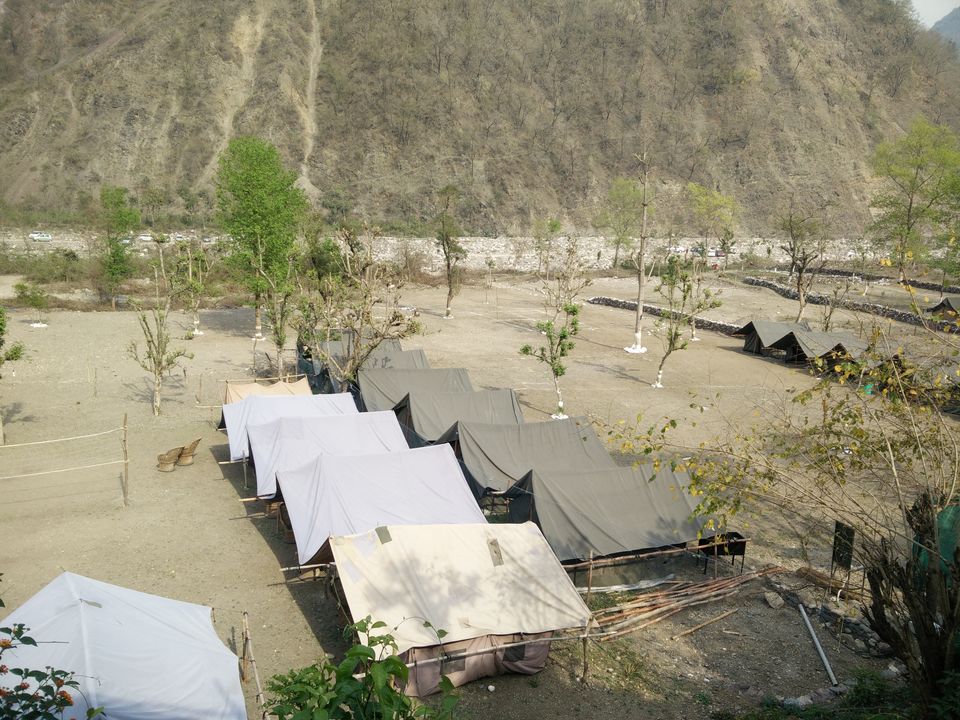 After having finger-licious lunch at the camp’s dining area … 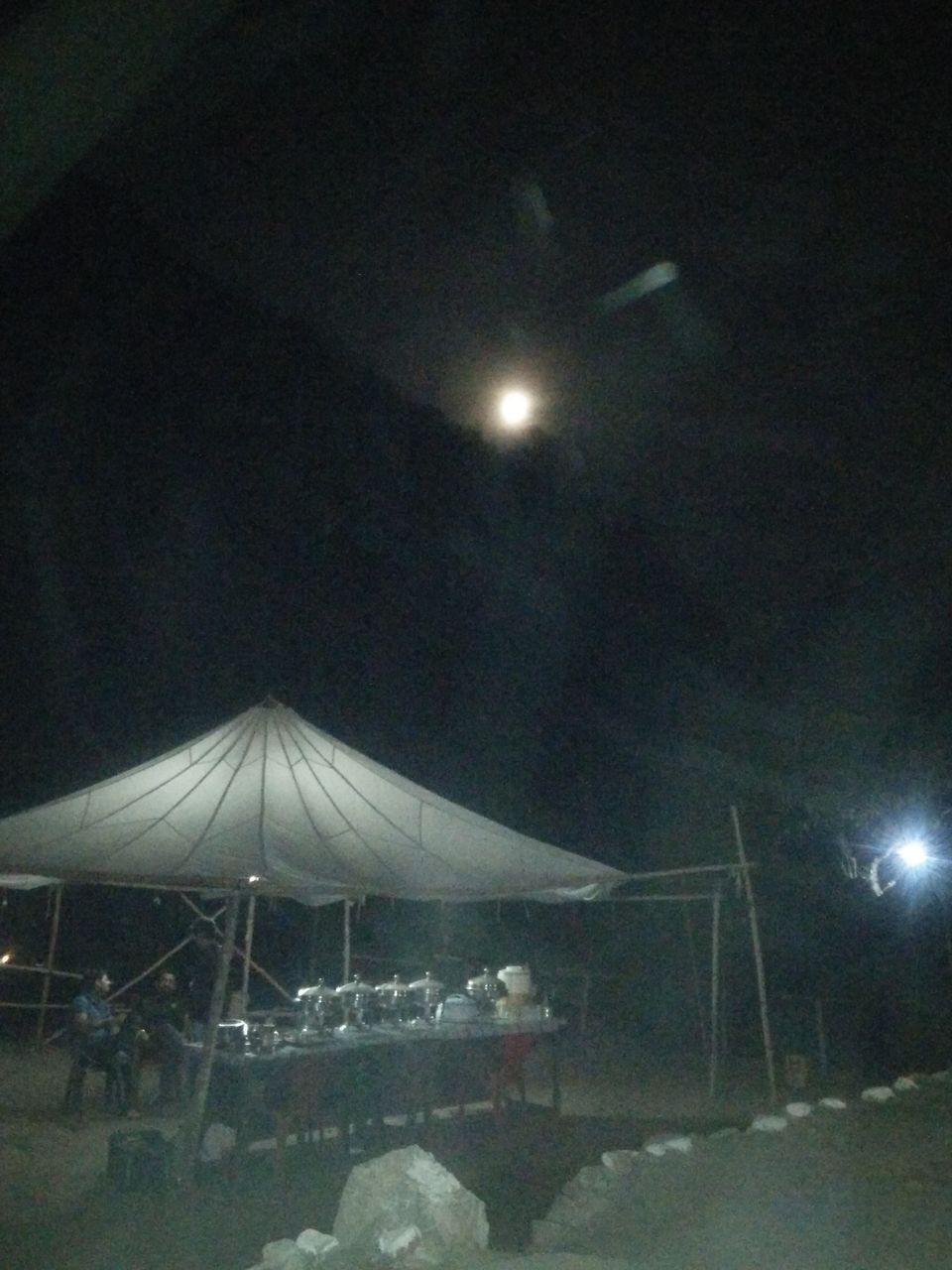 … we headed for our natural ‘Jacuzzi’ with the a view like never seen before.

Clear blue sky above, crystal sparkling water below, elegant lofty mountains all around! The experience was one of those joys of life that tranquillize the mind. 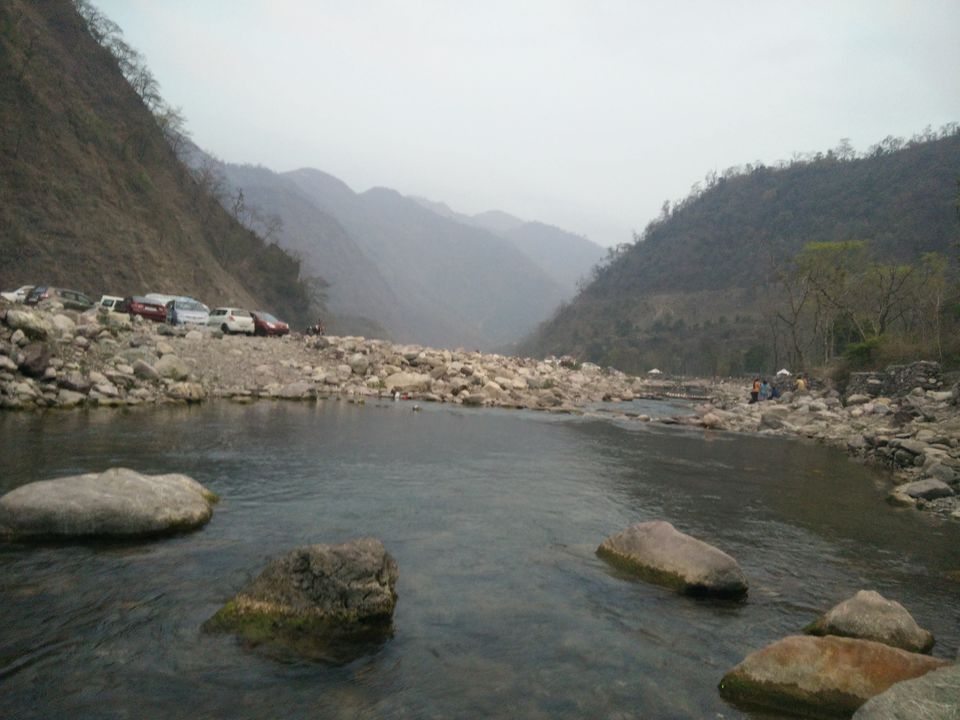 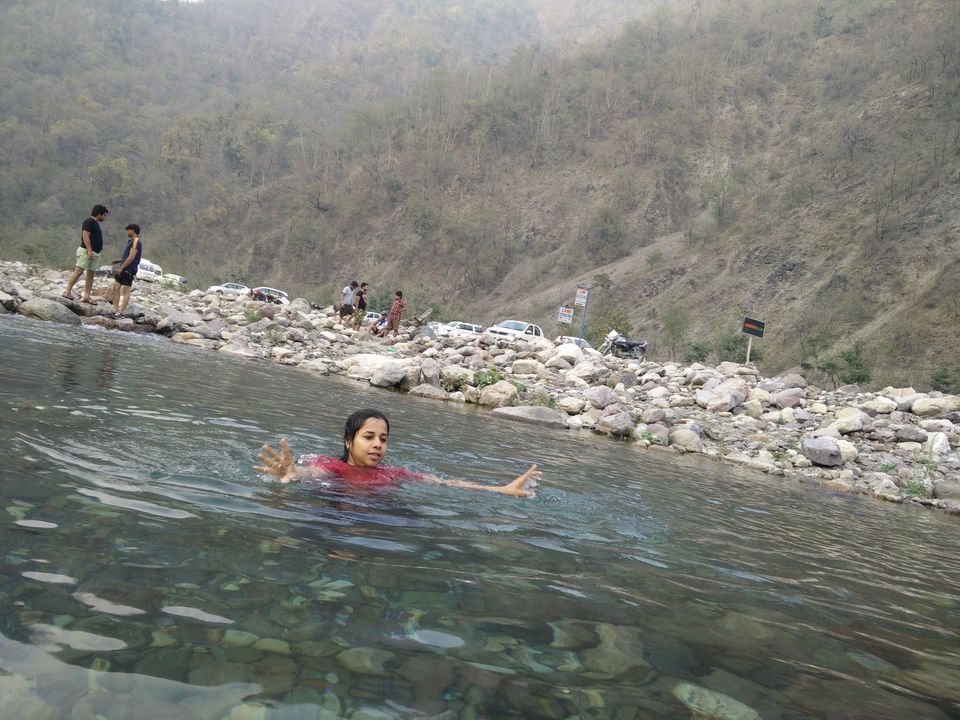 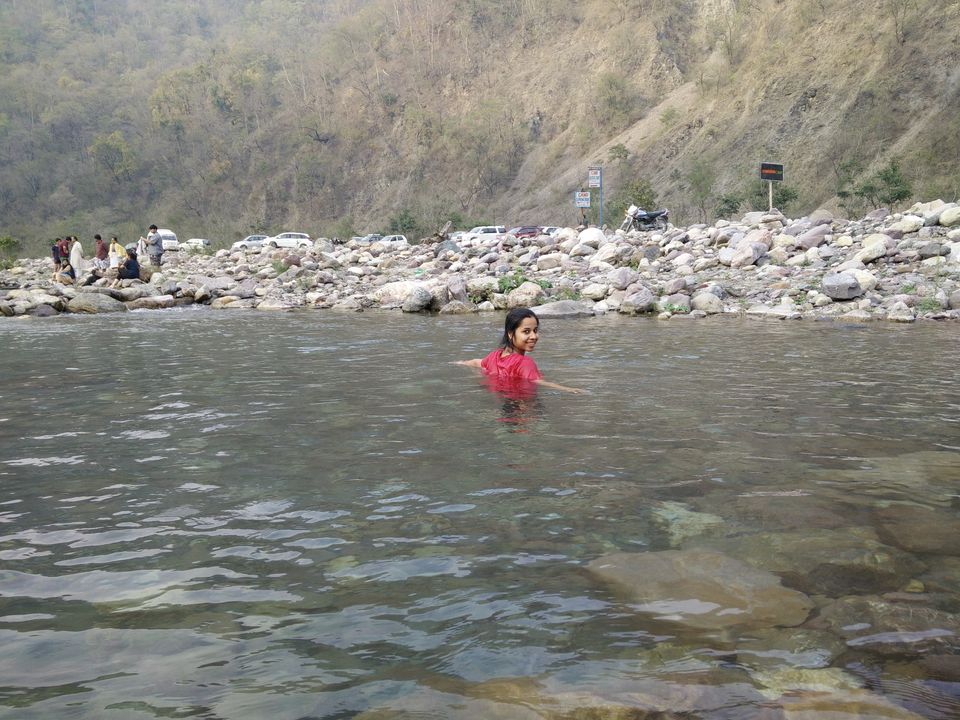 We were served amazing food for dinner & a bon-fire was arranged for all the campers. The highlight for me at the camp, apart from the natural ‘Jacuzzi’ ;), was the moon-rise, more scientifically called ‘moon burst’, I saw at night. I had never seen something like this before. The sight was splendid & left me speechless. 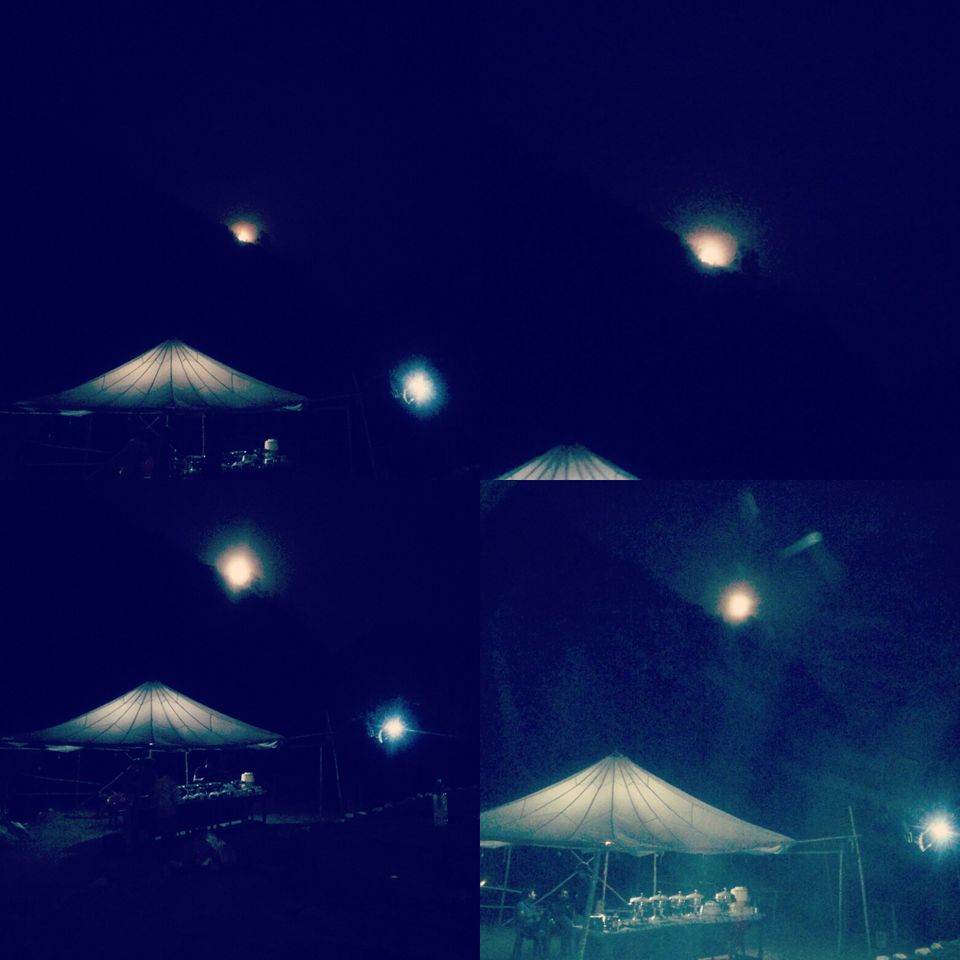 The morning at the camp was – blissful! It was cool & warm at the same time. 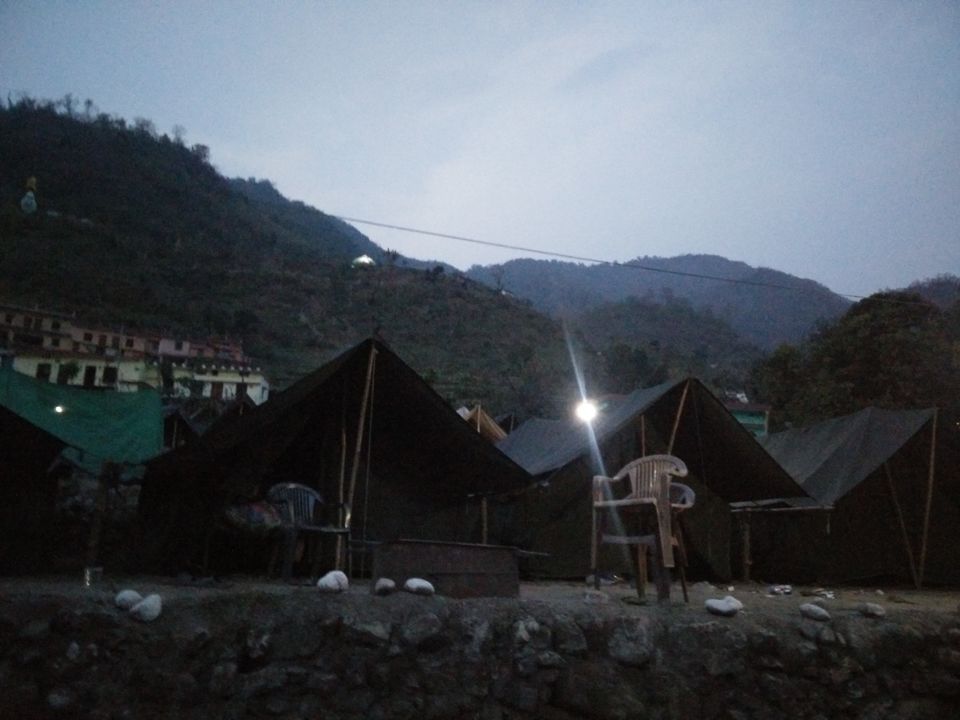 After a delectable breakfast, we were taken to a spot (for some reason called Marine Drive! – Every city seems to have a marine drive ;)) about 12 KM’s above our camp sight.

While we were asked to wait for our rafts to come, as usual my ‘travelling steps’ <3 got restless & I started wandering aimlessly down the mountains. I had mountains on one side & roads & shops on the other & then suddenly the mountains seemed to open up. & what I saw left me stunned! (I can’t think of a better word!). I think that sight took my breath away for a while; I fell in love with what I saw.

I did not have my phone or camera since we were required to leave all valuables behind before the rafting. & I had never wished more for a camera! I so wanted to capture it.

But it was nothing unusual. This was something we have all drawn as kids. Remember those art pieces we made, mountains on both sides, sun rising from behind the mountains, river flowing from somewhere in the mountains & a boat in the river!

It was that simple! I just didn’t know something as simple & spectacular as this existed.

I was amazed how as kids we could draw something like this having never seen it for real!

I walked on the cool white sand next to The Ganges & I witnessed magic in every inch I walked. I sat on the white sand, don’t know for how long. It was so silent; I could almost hear the silence.

Our rafts finally arrived; we were given our life-jackets, pedals & necessary instructions. We were 9 on our raft & one guide, I was the only girl. I had to literally fight for my pedaling rights! The guide wanted me to sit in the middle & give my pedal to someone else! Like, excuse me! I could not let that happen.

We went for a 24 KM rafting with at least 10 rapids ranging between grade 1 to grade 4 (4 being the toughest!). Several times I felt our raft would get captured & we would all fall into the rapids and die! ;) But we came out victorious each time. We thought we had captured the river but I think The Ganges was only making a fool of us! ;) Nevertheless, we felt like warriors! 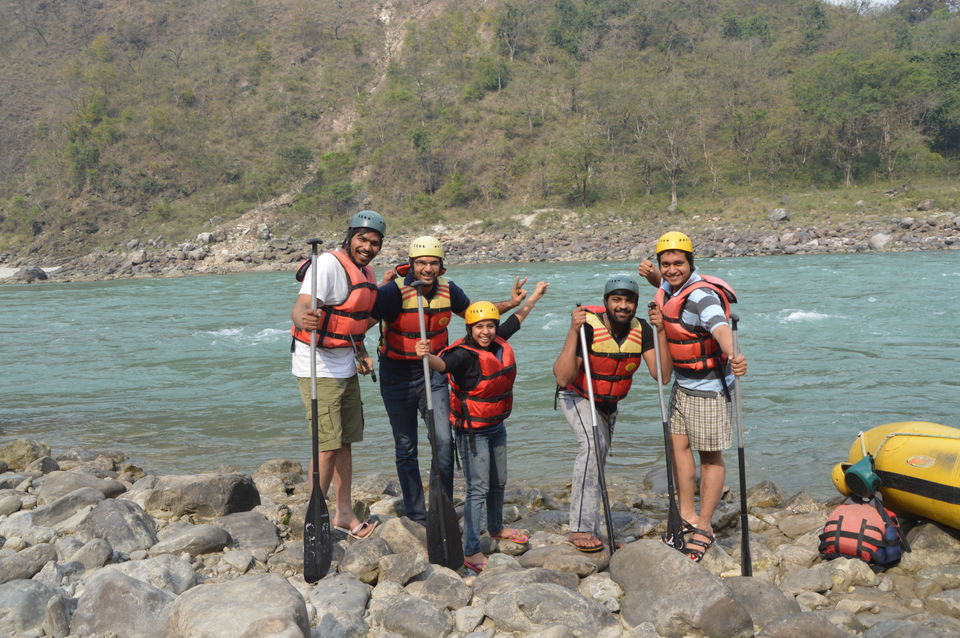 While in the still waters, we all jumped into the river several times & floated, thanks to the life-jacket. I don’t know how to swim & I have never been very confident in water but I knew I had to overcome my fears, whatever little I have!

While floating in the middle of The Ganges I felt light & for a while forgot my own existence! I saw the blue sky meeting the blue water & everything was blue for a long time. This, for me, was even more thrilling than facing the rapids!

Our rafts stopped at the famous ‘Maggi Point’ & we all went for cliff jumping. For me, this was the highlight of the day! While climbing the cliff I was so sure that I would jump fearlessly. I kept telling myself it’s not that high! But when I finally reached up the cliff & looked down at the green water glaring at me I so wanted to give up. My heart was in my mouth! Somehow, I mustered up all the courage that I ever had & jumped! Half way into the jump I knew I was about to die! Only, that I didn’t! I had never felt more grateful for my life.

This is a must try for all, for everything that we ever want is usually on the other side of our fears!

Our rafting finally came to an end after 3 dashing hours! After we de-boarded the raft I sat in the white sand for a while silently taking in all that had just happened wanting to live it all over again.