On my way to KEDARNATH - Part 1 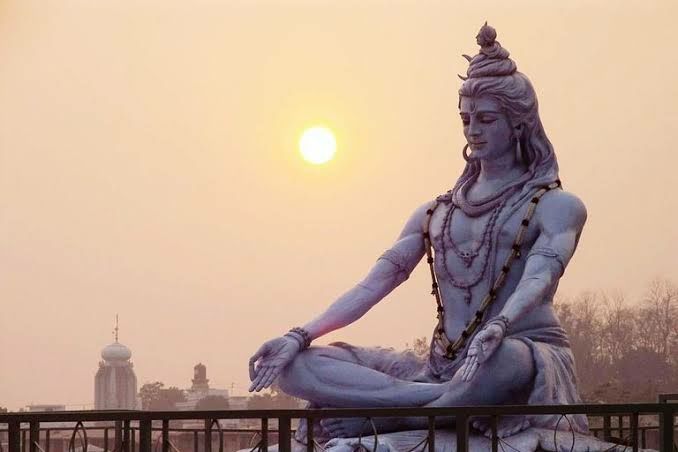 I am Shiva, the Stillness (Shi) Whereof all Movement (Va) is born. As Water, Fire and the Sun at once move and are still, so I, the Great Life both Move and Stand Still.
For this reason, the Wise Ones have called Him Shiva which means, That in Whom everything rests (Shi) and by Whose Power everything moves (Va). I Am that Shiva, the Original Ever-Living One; the Unseen and Uncreated Who Ever Is before everything that is seen and created is born or dies. 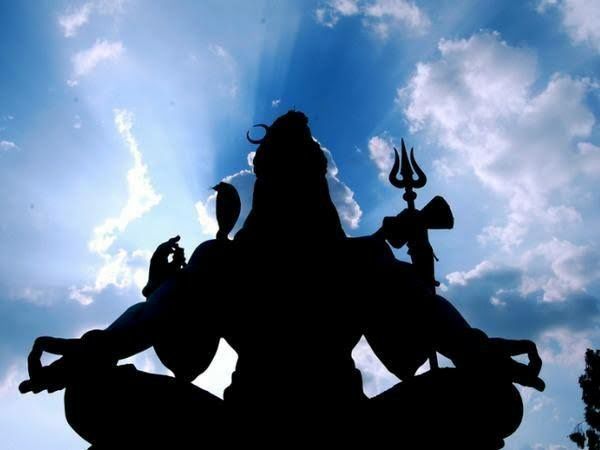 It becomes a bit hard for us to understand the exact term - SHIVA.
In sanskrit shiva means "the one who doesn't exist" Or who is not physical or bounded. Shih Vah - the pronunciation means becoming null or the term black hole is what has been till date invented to best describe shiva. In the universe , we can see, feel, touch but the space between them or the non- substance between them that hold all planets or stars or other substance existing in universe together that space is shiva.
The second word used to describe shiva is shankar where "sam" means equal "kar" means to do. What equates everything nature, planets, stars, their position, existance and space between them is shiva.

Being born in a middle class family, as a child I was engulfed with stories of the Shiv, a power which is unknown, tales on serpents, spirits and everything supernatural. The curiousity kept building up and the need to face,meet & greet this diety who is so largely reverred around the world became a goal.

The mystic charisma about the way Shiv carries himself left a huge impact in my life. 15 years since my grandparents passed away, there was no more story telling. The age of technology left us numb but wait - isn't Shiv all about science and technology !! The void inside me was left to fill. It grew deeper without any purpose nor pain. Every single inch of me looking at him was the answer to the ultimate truth; the answer to life; the answer to humanity.

2017 - Everyone has a phase where he/she takes extreme measures to safegaurd themselves and the ones around them. One such incident struck mine and I knew there was no possibility of waiting for a miracle to strike. I grabbed my rugsack and left to visit the abode of what they call KEDARNATH.

Delhi ISBT has numerous buses that go to & fro Dehradoon / Rishishek. It would take us approximately 7 hours to reach via road; 225 km to be precise from New Delhi ISBT.

As I sat on the right rear end side of the bus, I grabbed my sweater and watched the streets of Delhi disappearing. As we hit NH 58, the stories of Shiva lingered around my head.

Cremation ground: Shiva sitting in the cremation ground signifies that he is the controller of death in the physical world.
Tiger skin:A tiger skin symbolizes potential energy.
Three eyes: Lord Shiva, also called Tryambaka Deva, is depicted as having three eyes: the sun is His right eye, the moon is the left eye and fire is the third eye.
Kundalas (two ear rings):Two Kundalas, Alakshya and Niranjan in the ears symbolize the Shiva and Shakti (male and female)
Vasuki Naga :The snake is shown curled three times around the neck and is looking towards His right side. The three coils of the snake symbolize the past, present and future - time in cycles.
Ganga: Mother Ganga is symbolically represented on the head of the Lord by a female (Mother Ganga) with a jet of water falling from her mouth on the ground, signifies that the Lord destroys sin, removes ignorance, and bestows knowledge, purity and peace on the devotees.
Half-open eyes: When the Lord opens His eyes, a new cycle of creation emerges and when He closes them, the universe dissolves for creation of the next cycle. The half-open eyes convey the idea that creation is going through cyclic process, with no beginning no end.
Matted locks: The three matted locks on the head of Shiva convey the idea that integration of the physical, mental and spiritual energies is the idealody behind Yoga.
Nandi: The bull is associated with Shiva and said to be His vehicle.
Trident (Trisula): A three-pronged trident shown adjacent to the Lord symbolizes His three fundamental powers of will , action and knowledge.
Damaru (drum): Damaru symbolizes the two utterly states of existence, unmanifest and manifest.
The unclad body covered with ashes: The unclad body of Lord Shiva covered the ashes signify that Shiva is the source of the entire universe which emerges from Him, but He transcends the physical phenomena and is not affected by it.

How will it be? How would it be? How would the place look? Will I be allowed in? Do 26 year olds do this? Is this normal ? It didn't take long for me to regain control over my thoughts. The feeling of meeting a long lost , a loved one or someone you would never expect to see again in life; is what I was feeling in that exact moment ; All at once and I was still miles away.

Rishikesh - I reach early morning @6. The sound of vendors and birds chirping along with a faint noise of temple bells tingling on the background woke me up.
Half way through my journey, I rent a bike all the way to Gaurikund. 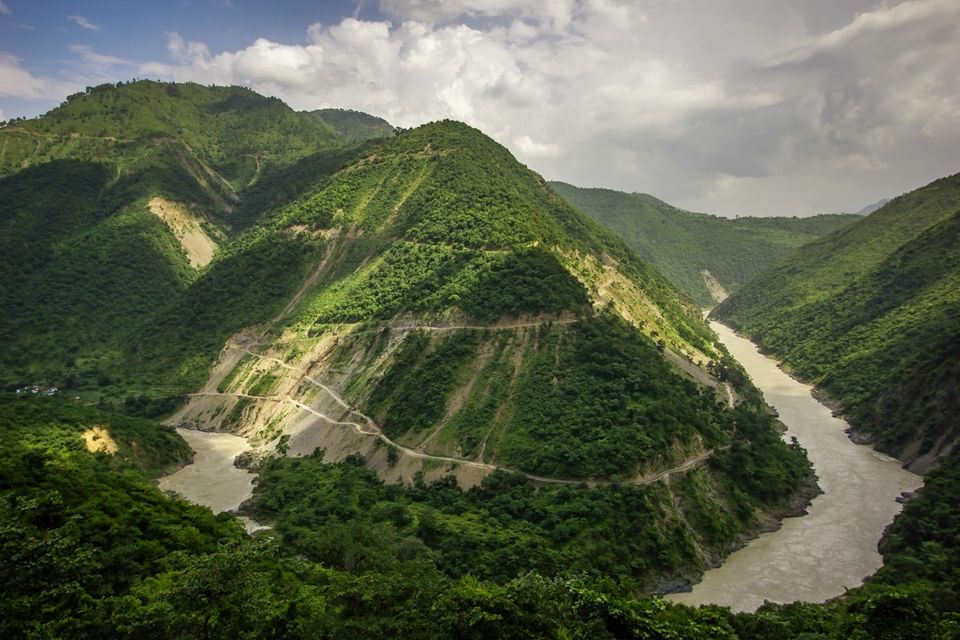 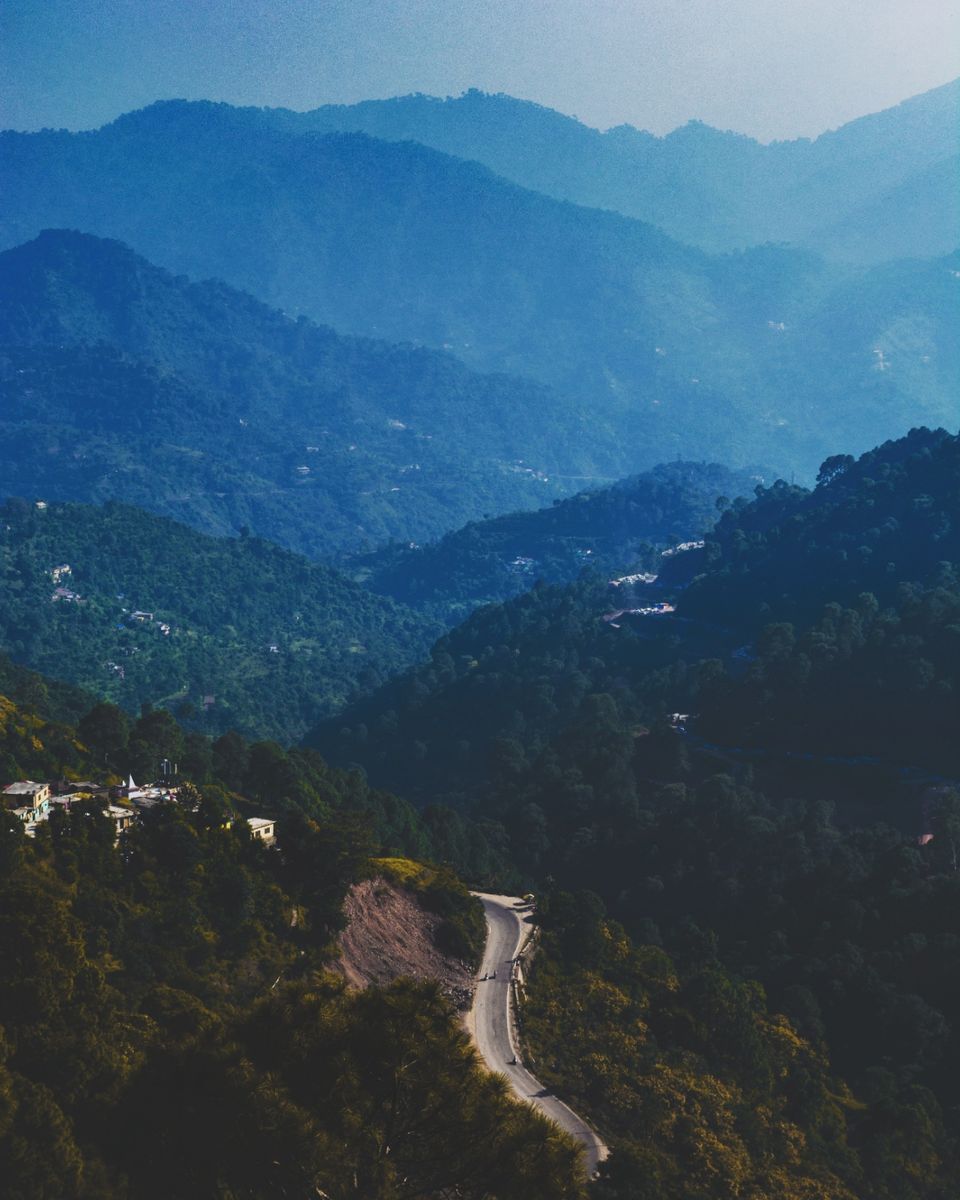 The roads leaving Rishikesh were majestic. One could feel the fresh air swooping accross the face. Onto my left were the mountain ranges & towards my right was the holy Ganga gushing down in power & balance. The atmosphere itself was scintillating yet enchanting.

Nature demands respect and truthfulness. It shows no mercy on the weak ones yet provides opportunity to the weakest. It enhances strength and never compromises on dedication.
The little twigs growing along side the huge trees gave me an insight on how one should percieve things in life.
The sun does not compare and it shares the same amount of light with everything on the universe. It is for the little twig or for the already grown tree to make it's way to reach the top. Fight for what is just and never loose hope.

It's 7:00 am and just reached Devprayag. Seated with the best view in the world; I see River Alaknanda and River Baghirathi meet. This is the very place they conjoin and become Ganga. As the aroma of tea leaves left me wanting for more, I remembered a story -

The story goes that Sati marries Shiva against the wishes of her father, Daksha, who wants this daughter to marry a god, rather than an ascetic. In retaliation, Daksha organizes a fire-sacrifice and invites all his sons-in-laws except Shiva, to the ritual. Angry at the exclusion of her husband, Sati confronts her father, who mocks Shiva’s ascetic ways in front of all the assembled guests.

Unable to bear this public humiliation, Sati kills herself by leaping into the sacrificial fire thereby polluting the ritual space and causing the yagna to a halt. When Shiva learns of this event, he experiences deep rage and sorrow. Casting away his usual calm indifference, he transforms into Virabhadra, a fierce warrior, and goes on a rampage attacking everyone who had been silent witnesses to Sati’s death. He stops only when Daksha is beheaded. But the vengeance does not take away the sorrow.

Shiva then goes around the world carrying the charred remains of Sati’s corpse, tears rolling down his eyes, moaning. All those who hear him feel the depths of his pain.

Shiva places the dead body of Sati over his shoulder and starts to dance. It causes huge destruction of the world. In order to save the world and the entire living being, Lord Vishnu uses his Sudarshan Chakra to cut down Sati's body into pieces .Wherever a piece of the dead body of Sati falls, that place is considered as a Shakti Peetha. There are 51 Peeths spread around Pakistan, India, Nepal, Bangladesh and China.

I hope one day I get to visit these 51 Shakti Peeths. These stories are not just meant to be. They teach us, guide us and awaken us from the worldly sins. Marital love, relationships, parental love and love for all creatures should never be undermined and altered. It is above all. The loss of a mother, a father, wife, husband, a son, a daughter is the greatest loss of all. In the earlier story, Sati rose up to her father's banter, she questioned and fought for the equal rights for her man ;her husband. On the otherhand, Shiva had warned Sati of the mishappenings that would occur if she went on the Yagya.

Shiva denounced his position from the Tri-Dev and roamed the earth in a quest to collect & find the 51 pieces from Sati's body.

As I zoomed past various ghats and mandir, the idea of meeting Shiv at Kedarnath uplifted me to a greater level. I was more open to new thoughts and ideas. The very basis of human growth, power & freedom is knowledge. I was jotting everything inside me, as I passed the majestic lanes towards Gaurikund ( base camp of Kedarnath ) 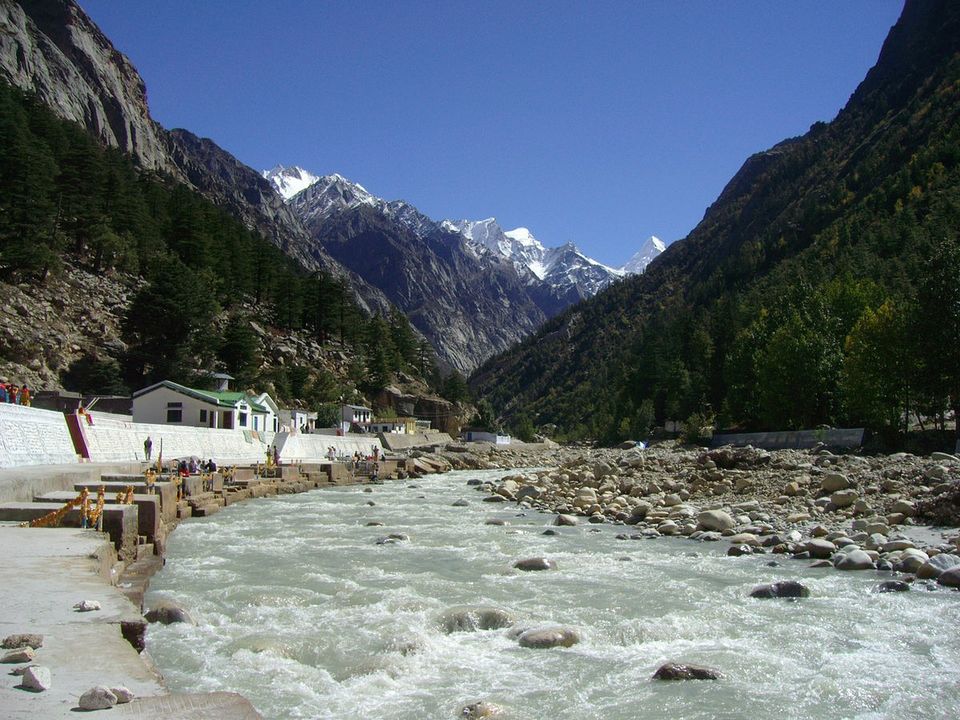 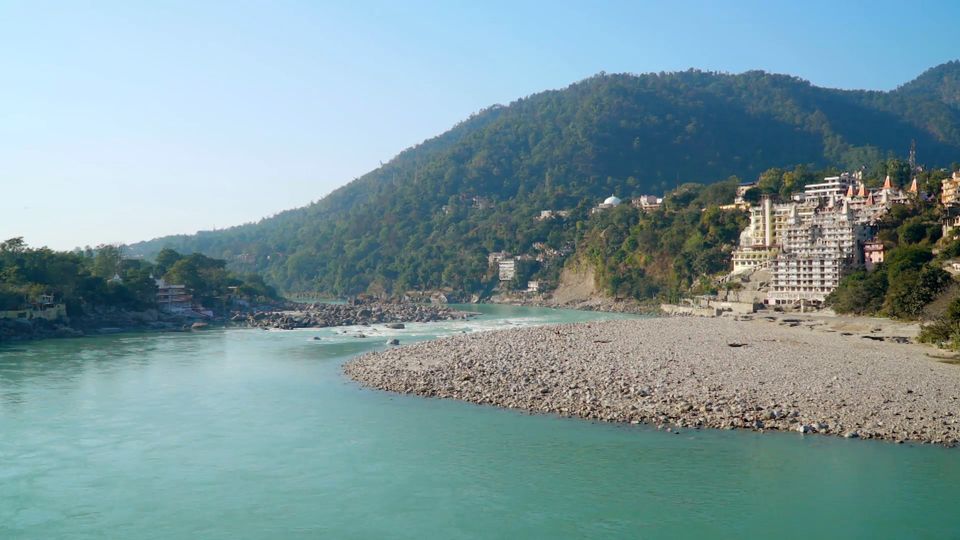 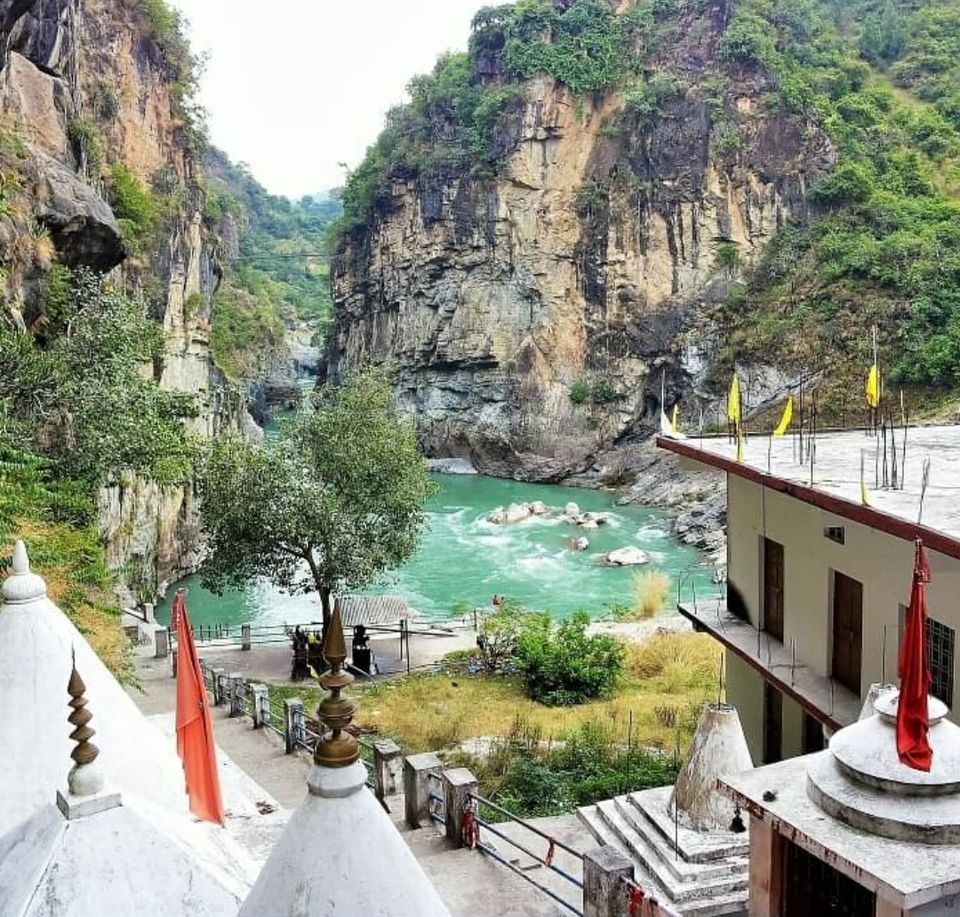 Names like Gaurikund, Guptkashi, Devprayag , Rudraprayag envoked a sense of belonging inside me. I felt as if, I'm a part of this place, a part of this story long before. Try saying the names, closing your eyes.. imagine yourself sitting by the Ganges with the open sky around you.. feel the power of nature strike your soul and connect.

Many of you reading this, may or may not have the chance to ever visit Kedarnath. Many of our parents, grandparents must be wanting to and yet may have to stay put with the idea of going there.

I hope, somewhere down the line, each one of you gets to feel, the bliss, the gratitude and the solace we deserve in life. I hope, I can share as much as I can through my journey. To seek Shiv, is to seek yourself.

He is endless, his stories are too.
On reaching Gaurikund, my eyes couldn't believe and my ears went numb on the sight I had in front of me.

I sat near the window of an Ashram, fascinated by the sight of pilgrims. The 10 year old me had finally found his stories , a place to rest.