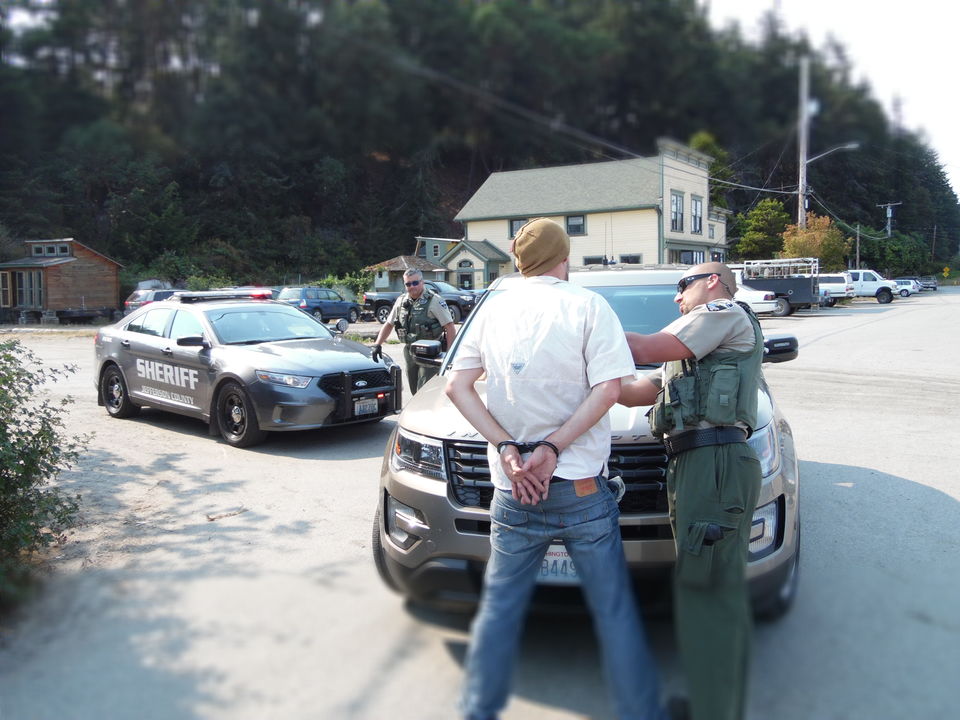 I was cooling my heels on Washington State’s Olympic Peninsula, near the old pioneer town of Port Hadlock, looking for a micro-adventure. Something I’d never done before.

I found it, strapped in the passenger seat of a Ford Explorer Police Interceptor crammed with radios, radars, computers, keyboards, and both lethal and non-lethal long arms. I was on a four-hour ride-along – with ten-year veteran Jefferson County Deputy Sheriff Brandon Przygocki. Turning left out of the compound, we’d barely made it down the road 100 yards when the lights go on, the siren sounds, and “we” have made our first traffic stop. Przygocki’s demeanor is non-threatening - pleasant even, and empathetic (if not sympathetic). Ten miles over the speed limit – no priors, valid registration, current insurance, and the driver is let go with a warning.

Ride-alongs can be the ideal “trip” for avid travelers who are tethered at home for the time being. Unless you are intimately familiar with law enforcement, or with the opposite extreme of the judicial system, ride-alongs offer access to an “undiscovered country” (to paraphrase Shakespeare) “from whose bourn (most) travelers return, and which can puzzle the will.” Sharing a day in the life of a patrol officer gives dispatchers, police explorer scouts, criminal justice students, college interns, job applicants, engaged citizens, and travelers in-general, a double dose of reality.

Five minutes after the first “stop,” and a two-car response domestic disturbance on Marrowstone Island. Not that I could understand the static-laden instructions relayed from dispatch. It takes special skill sets to decipher the terse reports breaking squelch on three to four channels, while keying the mic to respond, while keyboarding the computer, while whipping the car around 180 degrees, stomping on the gas, engaging the light bar, and goosing the siren as needed to move through traffic at speed. The car-to-car tactical channel confirmed an officer-on-scene, just as “we” spotted a car with no front license plate. A bleep of the siren, a quick check with dispatch, and Officer Przygocki engages the driver. No driver’s license – never had a driver’s license – couldn’t pass the driving test – and no insurance. A quirk in the Washington State Traffic Law codes “driving without a license” as an “infraction” with a $550 fine. Driving with a suspended license is a misdemeanor with a maximum jail sentence of ninety days in jail and a $1000 fine (first-time offenders, not due to gross negligence or DUI). If the suspension was for more serious reasons (multiple offenses or DUI) it is punishable by a fine of up to $5000 and a maximum sentence of 364 days. Police don’t write the laws – but they do enforce them.

We complete the original domestic disturbance call (a dispute between roommates resulting in one moving out) – and are sent on our next assignment – a dog has been caught in the tide and is being swept towards Puget Sound. We respond, but are called off as the dog manages to paddle its way back to the beach.

Another domestic disturbance call – this one between siblings and the third call of the day to this same address. Again, two cars respond. The officers gently, but firmly de-escalate the conflict and one of the disputants departs the property.

Another traffic stop, thirteen miles over the speed limit – just outside of Port Hadlock. No priors, brand new car, dealer’s plates – the driver acknowledged an unfamiliarity with the new car, and was released with a warning. Many, if not most traffic violations come down to driver inattention. If they weren’t paying attention before the traffic stop – the chances are they are paying attention now, and at least for the near future.

The last stop of the day (at least the last stop of my four-hour shift) provided an adrenalin/dopamine rush that had me wired for the rest of the day. Deputy Przygocki spotted a familiar face at the wheel of a car he probably shouldn’t have been driving, on the other side of a four-way intersection. An almost immediate about-face wasn’t enough. When we got across the intersection – there was no sign of the suspicious vehicle. Lights, siren, call to dispatch, call on tac channels, ploughing the center lines as traffic on both sides of the road (with varying degrees of alacrity) pulled over to make room, all the while keying the keyboard with his free hand (while I hung on for dear life). It’s amazing how fast and how far a screaming patrol car can go when it’s driven with a will. But when we’d reached Port Ludlow – it was obvious that the suspect vehicle had turned off. Two can play that game. We clover-leafed through the side roads at a more deliberate pace making our way back (without the lights and sound) until we’d all but closed on Port Hadlock – when there, around the corner and just off the waterfront, was the familiar face.

The driver was driving on a suspended/probationary license, with multiple DUI infractions and a mandated ignition interlock device to monitor alcohol intake prior to starting and operating a vehicle. The driver was handcuffed, searched, and placed in the backseat of the police interceptor. A second squad car took charge of the driver’s passenger and vehicle, while we headed back to the Jefferson County Sheriff’s compound, and the suspect was transferred to the Jefferson County Jail.

It’s all about safety – public safety, and officer safety. Stopping a car for a few miles over the speed limit might not be a high-risk stop, but then again – it might be. Why were they speeding? Were they running from something? Running to something? Was it inattention, or a willful violation? If inattention – was it due to a medical condition? or intoxication? or confusion? If willful, does that display a chronic predisposition to criminal behavior?

Officer Przygocki knows the danger inherent in even the most routine traffic stop. He palm prints the back of every vehicle before approaching the driver. He’s putting his fingerprints and DNA on the vehicle to prove this was the last vehicle he had contact with if the stop turns violent and he’s unable to say it with words. His ritual is a grim reminder of how very dangerous his job is.

It is not a crime to be down on your luck. It is not a crime to drive an older model car, with or without duct taped fenders, windows or tail lights. On the other hand, pulling over a late model sedan with no priors might invoke different expectations than a high performance sports car or rusted-out pickup truck.

Ride-along programs can serve as a powerful bridge to the community served. Officers (and their ride-along) are injected into the otherwise private lives of their fellow citizens unexpectedly, often during times of stress, vulnerability and anguish. Domestic disturbances, high speed chases, apprehensions, and even “routine” traffic stops can turn deadly in a heartbeat. To say the experience was “fun” – trivializes the experience. To say the experience was “educational” evokes a noncommittal cliché that communicates nothing. For me? Witnessing even a small slice of a police officer’s shift from the “other side of the windshield” was sobering, humbling, and ultimately? Infinitely reassuring. A visit to an “undiscovered country” which taught me things I didn’t know I didn’t know.