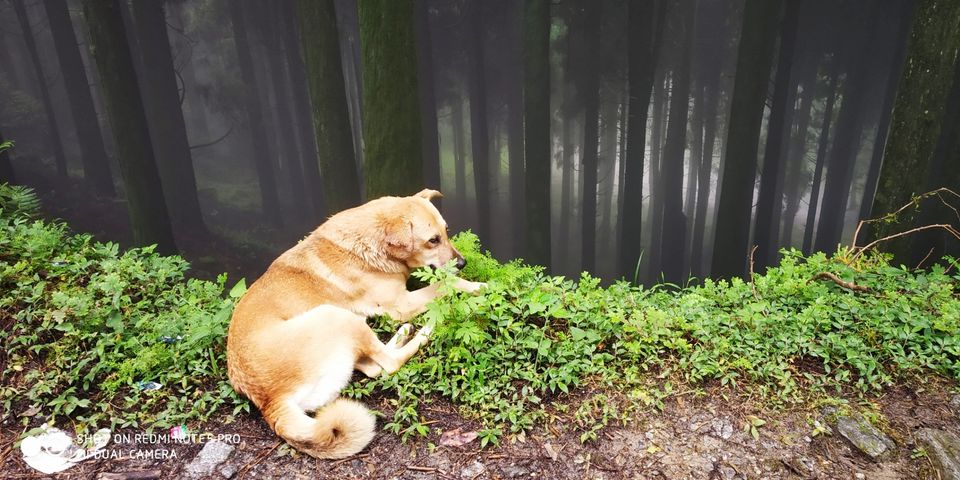 Unplanned tours are always better than planned ones as the latter never take place.

The tour wasn't decided until the previous night when everyone finally confirmed that the  trip was on. However the place had not been decided yet and we planned to think about it on train the next morning.

The tour was special from many point of view. This time our regular team was accompanied by four new members namely Prosenjit, Abdur, Firangi and Surojit da.

Our train was scheduled on 7:20 from Siliguri junction so we were in a hurry right from the beginning of the day. I, somehow, got there with 5 minutes in hand. But Ramen and Auro were very late. And we were quite surprised to see how they managed to catch the train at the last moment. Unfortunately, Avijit couldn't make it and had to go on a bus.

We had tickets up to Binnaguri rail station and had 2 options, Bindu or Lava. Ramen being the only member to have visited Lava before, suggested that Lava would be the better option. We got down at Malbazar railway station from where we got on a bus to reach Damdim. There starts a highway from Damdim to Lava via Gorubathan. After much discussion we had a taxi whose  driver, to our surprise, was a Bengali. He promised us to make short halts at all the places with scenic beauty.

After crossing Gorubathan, a hanging bridge

was the first thing that caught our sight. Some of us  climbed down the hill to see the bridge, while Abdur and I decided to stay back looking after our baggages. The most important stoppage was beside a small waterfall locally called a 'jhora'. After travelling for around 1 hour on that rough road we were tired. So we could not resist the fast flowing cold water being offered by that jhora. While we were busy enjoying, it opportuned Prosenjit of a short photo session.

Since then the journey on Maruti Omni was quite comfortable for us as the jerking was minimal until a bend where we found that our car was struggling to go up. We all got down to help the driver and when it started Avijit and Auro raced to get their chosen seats back. There was only one instance when all of us were really scared. It was when our car's left wheel banged against a boulder in an attempt to pass the only four wheeler in our whole journey, going downward.

Although we reached Lava by 1:30, the panoramic pine forest was visible from kilometres away. The place was surrounded by hills and dense forest with all its beauty to mesmerize us. In the middle of summer the temperature was well below 20 degree centigrade. Lava is at an altitude of around  thousand metres which makes its  evenings colder than the winter's in the plain. That was an off season so we got the rooms quite cheap at 1000 For 8 persons. Our rooms had balconies facing distant hills partly covered with clouds.

In the afternoon, while others were sleeping, Prosenjit and I went out to explore the nearby areas. There was a narrow lane going upward through the forest to some unknown place. After walking for hardly 10 minutes we were at the middle of the forest. It felt quite scary as the news of Royal Bengal Tigers' being seen a few months back haunted us.

It was drizzling. So we decided to go back. There we met a person who was on the same way through the forest. On asking a few questions he happily replied that he was going to his village 1 hour away walking from there. On returning to hotel we discussed with our group and planned to take that way to reach our next stop Risabh, 6km away, trekking all the way.

On the way trekking to Rishop 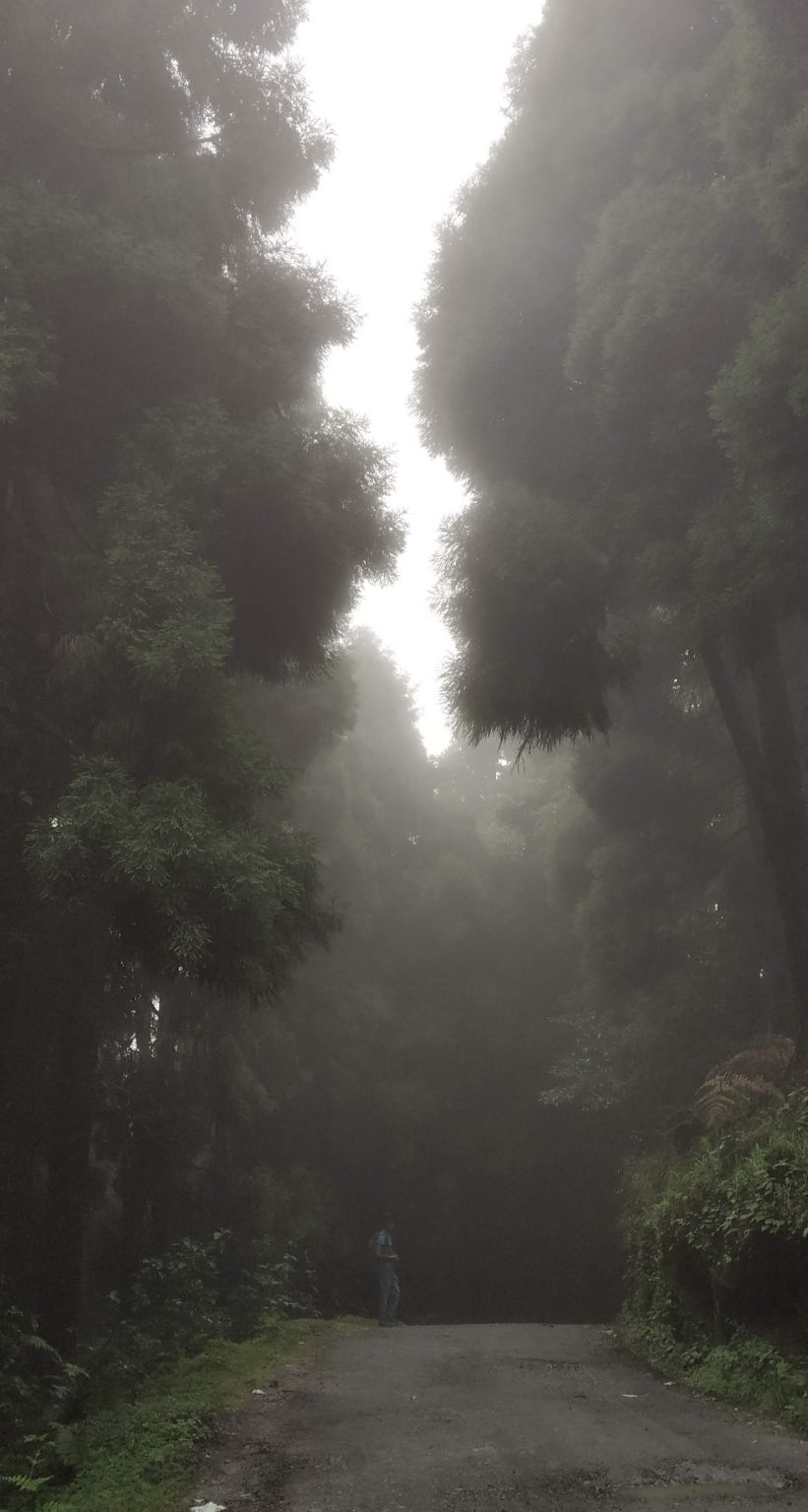 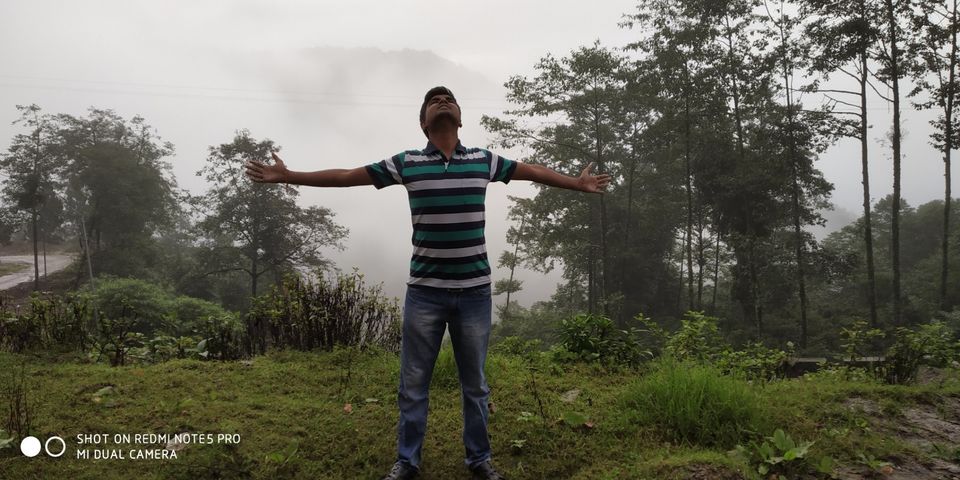 Next day by 8 we were on our way through the famous Neora Valley forest to Risab, a hilly village. In the morning while having light breakfast in a hotel, the hotel owner warned us against the region's being infested with leeches , as he said, " kitna bhi karlo, wo to pakdega hi". Those insects however small they are,  are very scary specially when they got stuck to our shoes. They made holes on the thighs of Ramen and Firangi causing a lot of blood to ooze out. Auro was the only person from whom the leeches stayed away.

Firangi and Abdur were the most inexperienced and unfit members. They accompanied by Surojit da's photophilic nature resulted in frequent delays.

As mentioned earlier, it was a dense forest with hardly any connectivity to the outer world. A time came when the only modern instrument we were relying upon, GPS, stopped working. Fortunately, at a trijunction we met two locals carrying commodities to their home up in the hill. They provided us with water and advised us to follow them up to Rishab.

We had no other way but to follow them. That was the most difficult part In our trekking. A slope of more than 45 degree exhausted us. Abdur and his companion Firangi found it difficult to keep pace with us. While Auro made use of his 2 years of experience in Darjeeling and was the first to complete that short but steep walk.

It was just 10:30 in the morning. So all of us decided to take rest for next 1 hour and had readymade noodles that were bought in Lava. Rishabh, although a village, has full network coverage that we used to locate our position and plan future proceedings.

Our next halt 'Chha(6) mile' was another 5 or 6 km from Rishabh. The place is located at  a trijunction where the road we wear on, meets with 'Kalimpong to Sikkim' road. If we get there, we we're only 4 hours away from home. All we need to do was to hire a taxi that would take us to Kalimpong.

As we advanced, the road was not as steep as it was earlier. From here two dogs started following us. Unfortunately we had no food to give them. It reminded us of our Jayanti tour. The dogs knew all the shortcuts and did a tremendous job to save our time. We thought to feed them once we reach Chha mile. By then, pine trees were replaced by some unknown local ones, most probably `Himalayan Dhupi`. It felt amazing to rest on an uncertain path, beside a jhora, surrounded by hilly forests looking to the scenic Sikkim Himalaya exposed by a bent in otherwise a straight ridge.

We were hungry, so were the dogs following us. Chha mile was still kilometres away from there. I was so tired and the view was so charming that it bounded me from moving. I closed my eyes and imagined the shops selling momo, chowmin, SeoPhali and many more. 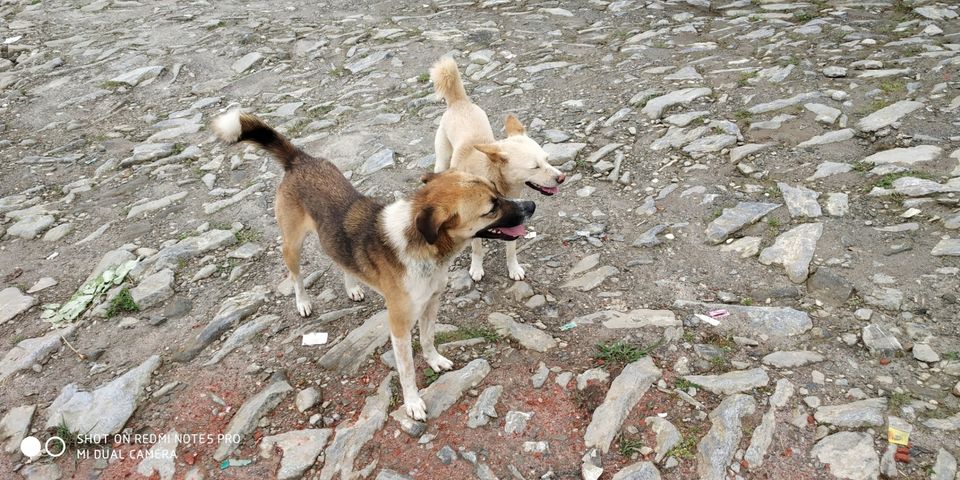