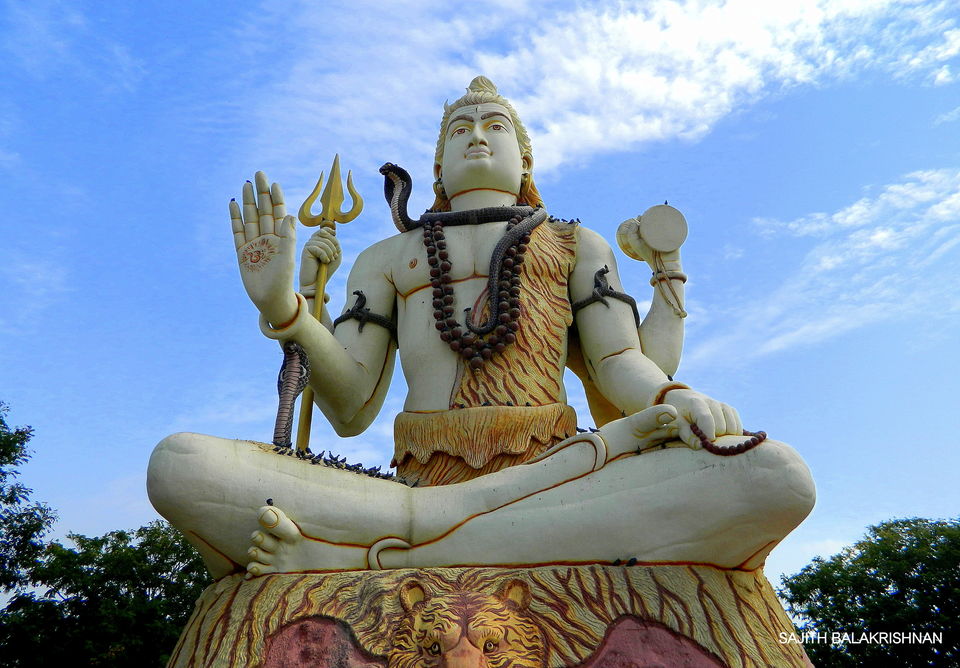 In February 2016 we planned a visit to Dwarka. It was the retreating time of winter , so I hoped the climate to be pleasent there.

We left mumbai on Wednesday,17 Feb by Sourashtra Express from Mumbai Central. The train has its scheduled arrival at 3.30 pm next day. The train was on right time and reached Dwarka at 3.30 sharp.

We had booked our room at Hotel Vandana which around 1.5 KM from the temple. The hotel has a wonderful kitchen which serves amazing Gujarati food at very reasonable rates.

Post lunch we planned to expolre the town. Dwarka is a small town which we can expolre on an auto. Only Nageshwar and Beyt Dwarka is little far.

We hired an auto ( the driver of the auto which dropped us from the Railay Station was waiting in the lobby hoping for a trip) for Rs. 300 for sight seeing.

First on our list was the Bhadkeshwar Mahadev Temple . On our way we visited the Brahmakumaris Ishwariya vishwa Vidyalay Centre. Worth a visit. You can enjoy the beautiful sculptures there.

Bhadkeshwar mahadev temple is located in the sea. We ha to go by a passage which remains submerged during the high tide. It a very ancient temple . The place is really beautiful with sea all around . The sunset view is amazing from there. Camel rides are available on the beach.

Next we went to Gita Mandir. The temple is depict the Gitopadesh by Lork Krishna during the Mahabharatha.

Then we went to the Gomti Ghat. It is the place where River Gomti drains in to Arabian Sea. Last time when I visited there was a beach but now they have made a promenade there. The beach was completely vanished. Signs of coastal erosion can be observed here. The steps made in the Gomti ghat have started to fall off. No wonder the original temple here was submerged by the violent sea. The damage done by coastal erosion during a period of 12 yrs is unbelievable.

Close to the Gomti Ghat is the Samudra Narayan temple. The outer wall of the temple is touched by the sea waves.

The promenade recently constructed is so nice and beautiful. There are so many tourists enjoying sea breeze. The light house is visible from here. The reflection of the setting sun on the calm sea with the light house on the backdrop give a surreal experience. The promenade is a good place to spend an evening in this sleepy town. Stroll around , feed the pigeons or simply enjoy the sea sitting on the benches munching the peanuts or corn. Mind the cows which wander carelessly.

Dwarka keeps its old world charm over the time and still mostly untouched by urban chaos. Though visited by many pilgrims and tourists the place has not fallen prey to commercialisation.

Time to go back to the hotel … Hotel Vandana serves authentic Gujarati thali which really amazing. The fair is unlimited with a variety of items complete with sweet or dessert.. The Chaas in the end makes it easy on the stomach.

After a good nights sleep we woke up early to have darshan in the temple. The temple opens at 7 am. Before you plan for Darshan check for the timings as the Temple closes for puja many times a day.

The Makhkhan , which is served as prasad after the morning arti is heavenly in taste.

The present temple has been built during 15-16 century while the original Temple is believed to be built by Vajranabha , Lord Krishna's grandson. It was built over Hari Griha , which was Lord Krishna's residential place, and was submerged in sea during the course of time.

After that we went to Gopi Talav.Legend says thatWhen Krishan moved to Dwarka, the Gopis could not bear the separation and came to visit him. They united with their Krishna at the Gopi talav,, unable to part with him, the Gopis offered their lives to the soil of this land and merged with their beloved. It is said that they turned into yellow clay, known as Gopi Chandan. Even today the soil of the Gopi talav is extremely smooth and yellow in color.

Local people collect the mud from the pond, roll it and sell as Gopi Chandan.

After spending some time we left to the city. On our way back we stopped at Rukminee Temple. It is a very old temple.

The temple is maintained by some local Brahmins who pay a hefty sum to get the managing rights and later collect money from the devotees. The Sanctum which houses the idol is covered with a cloth and is removed only for a brief period, so as to protect the idol from the salty wind. The stones with which the temple is made of is badly corroded justifies this claim.

Another place to visit is the Beyt Dwarka which we gave a miss. The trip to Beyt Dwarka includes a ferry ride from Okha port and as per reviews available online they give safety the last priority. As I have two small kids I thought I'll visit there sometimes later. As per some news reports a sea link is being planned from Okha to Beyt , which is sure to boost tourism in this part.

With that our small trip to Dwarka comes to an end. Later in the after noon we were back in the hotel . Next day was our train back to Mumbai.