The Beauty Spots Of Scotland

Mist rolls across the tops of the Highland hills like an entity alive itself, there’s a sense of it having its own will and character. The mass that is both gray and white at the same time, blends into the sky overhead so that the feeling imparted is of being inside an overturned bowl. This isn’t Texas, where they term a never-ending expanse of atmosphere, ‘Big Sky’ country. No, everything hangs low here when the sun is not shining and the cobalt sky is hiding behind the mists. Even so the sense of vastness is extreme. The mountains seem like prehistoric giants, merely slumbering for a spell. How can it be both vast and insular at the same time? Because this is Scotland. A land of contradictions and of surreal possibilities!

When I found myself in Scotland on a tour with Rabbie’s, I had no idea that some of the things we would do on our last day would make me feel like I was checking things off a bucket list. It was as if they’d reached into my consciousness and pulled out the things I am curious about or have thought of doing but have never made a concerted effort — to actually, do.

When nature does close in on you, it’s with a mysteriousness that matches the creeping mists. Moss and lichen hang so heavy from trees that it suggests the limbs drip with life. Rivers flow fast and dark with black water that appears never to freeze over. Rocks and tree trunks are carved with strange symbols of a pagan religion ten times older than any local I meet, more so even; and in January, there is more blooming and growing here than I have seen anywhere else, in any country, in any winter I’ve lived through. The plants are low lying, prickly at times and forever being shaken by wind but they are here should you choose to pay attention to them.

My theory is this — Scotland actually IS the home of magic, if any exists in our world. It makes its home on the bonnie islands in the North Sea where tartan and wool keep the cold at bay and where ‘aye’ can have more meanings than there are types of Whisky. Scotland casts a spell on those who cross into its borders and holds them sway inside a place where nothing seems impossible and where every breath seems sweeter than honey. The locals even have a term for what I’m trying to explain: DSL. Otherwise known as, Deep Scottish Love. And when you leave the fold, that feeling you have of intense longing and of missing the place you fell so deeply in love with?

Built for the Royal family, apparently the Queen once said it was the only place in the world she could truly relax. It’s a grand ship, retired in 1997, that’s truly outfitted for royalty and has hosted many of the most famous personalities on the planet, at events with the Queen while she was in ports around the world. I love boats, sailing and maritime history so for me, it was a fun afternoon. I’d recommend if you’re going to go, leave time for afternoon tea. The Darjeeling with a slice of lemon cake was delightful and the parlor on the top deck has great views, enclosed from the weather. 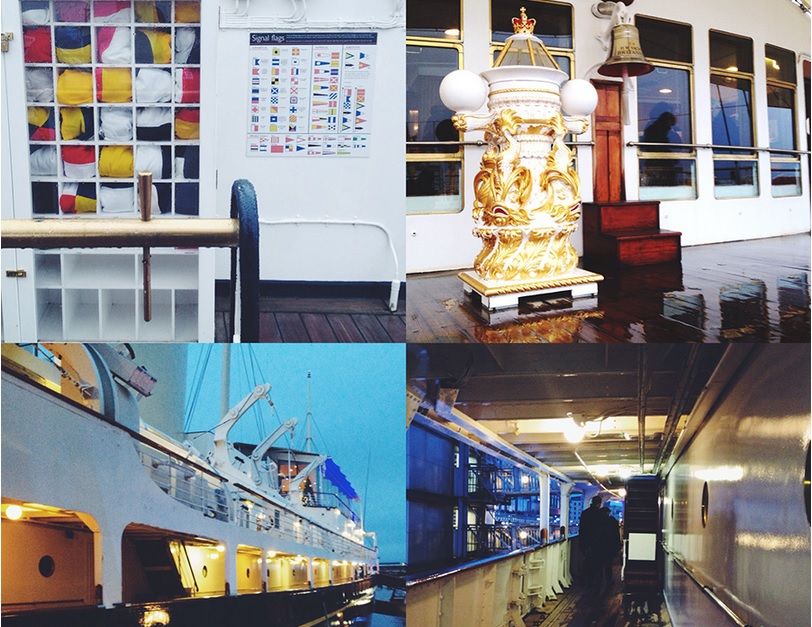 During the last trip to Scotland, we had a lot of really classic fare from pubs and chips shops. Our lunch at Earthy was a really unusual peek into the organic, farm-to-table movement that’s happening in Scotland I must say I thoroughly enjoyed it. Their salads were some of the best I’ve had anywhere and a nice local cider paired well with the side of soup I also had. On a cold day, it’s the perfect place for a really hearty but healthy meal. I bet it’s a gem in the summer as well. 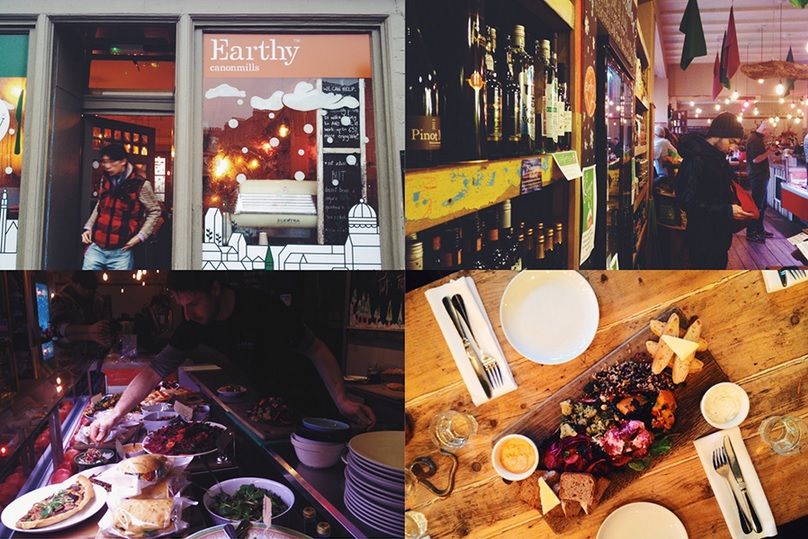 By far my favorite part about the overall Hogmanay festival is the Torchlight. Led by Vikings with torches twice the size of what I carried and accompanied by bagpipes and other music through old Edinburgh, ending on the top of Calton Hill, it’s just unlike anything else I’ve ever done anywhere in the world. I laughingly joked my first time that I couldn’t believe they were letting me play with fire at all….let alone also letting thousands of other people do so at the same time! Grand grand fun and so many photo-worthy moments too. 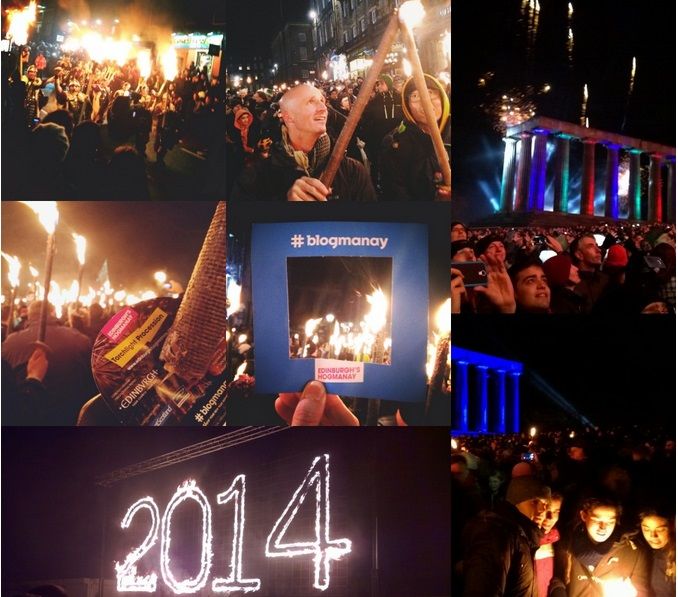 We escaped the cold for dinner at Howie’s after Torchlight and the meal was really truly lovely, one of my favorite meals in Scotland. A bit dark for food photos but I loved that that made the inside of the restaurant so cozy and inviting after all the hours outside in the cold. If I am back in Edinburgh again, it is definitely a place I’d return to.

One of the most fascinating castles I’ve ever been in, if not the most fascinating, it’s recently completed a really thorough renovation project that began back in 1999. The Queen came and formally opened it just in 2011. I particularly enjoyed seeing the Royal Apartments furnished as they would have been during the life of Mary Queen of Scots and I also liked seeing the weavers at work who are currently completing the last of the panels which are a reproduction of the famed “Unicorn Tapestries.” There’s something about being in the shadow of a centuries-old castle that really sets a grand tone for New Year’s Eve and it turned out to be the perfect place to sport a Stewart tartan kilt. I enjoyed the live music, loved meeting the boys of the band “Bags of Rock” and Dougie MacLean’s acoustic version of ‘Caledonia’ actually made me tear up. The fireworks were the icing on a very nice cake. 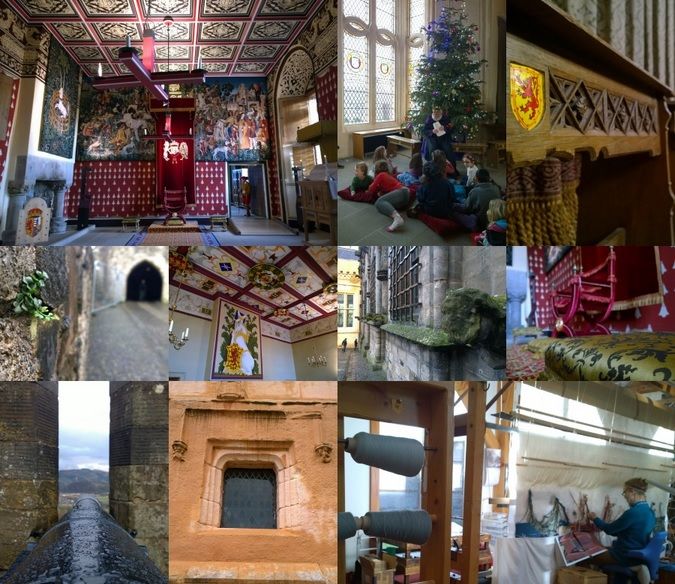 The drive to Gleneagles made my heart glad because the beautiful countryside provided some of the kind of natural beauty that inspired me to write this post last year. It was both new, and familiar, and very inspiring. Though I couldn’t have imagined what fun awaited us when we arrived at Gleneagles. First, we had a Falconry lesson. It’s something I’ve always yearned to do yet believed wasn’t possible unless I visited the middle east, maybe a country like Jordan. I also had my doubts about the treatment of the birds but my mind was settled when I saw firsthand, and learned about, what great lengths they go to in order to take care of and fairly treat their hawks. 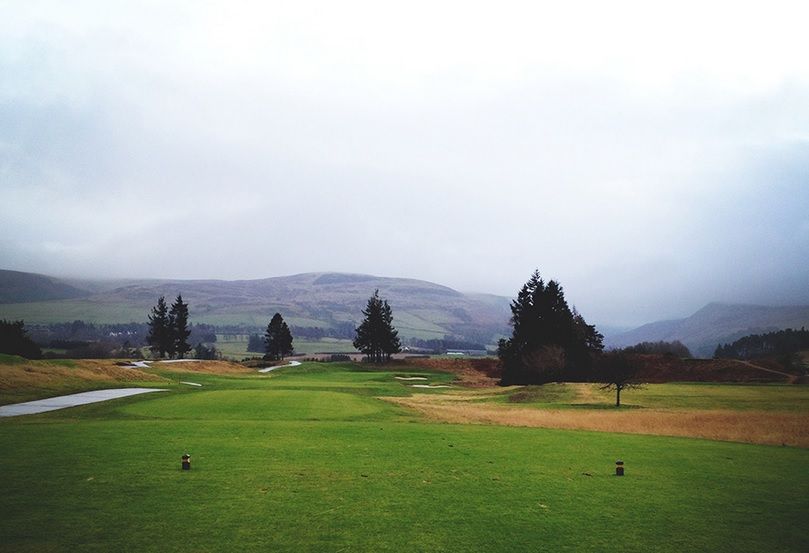 There was one last surprise, ANOTHER decadent meal at One Square where again the Chef personally welcomed us and gave us a tour of the kitchen. Edinburgh Castle was lit up outside our window, and a last tour caused me to finally start a written bucket list: during my next trip to Edinburgh, I want to spend a whole day in the One Spa where a rooftop pool is just one of a dozen amenities that wild horses would probably need to drag me away from. So many sweet moments, so many luxurious moments, so much fun and such incredible food…in only one day! 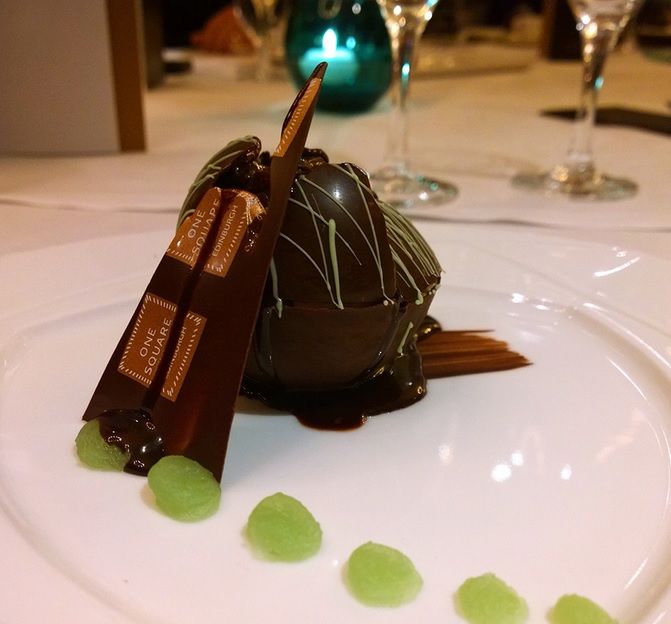