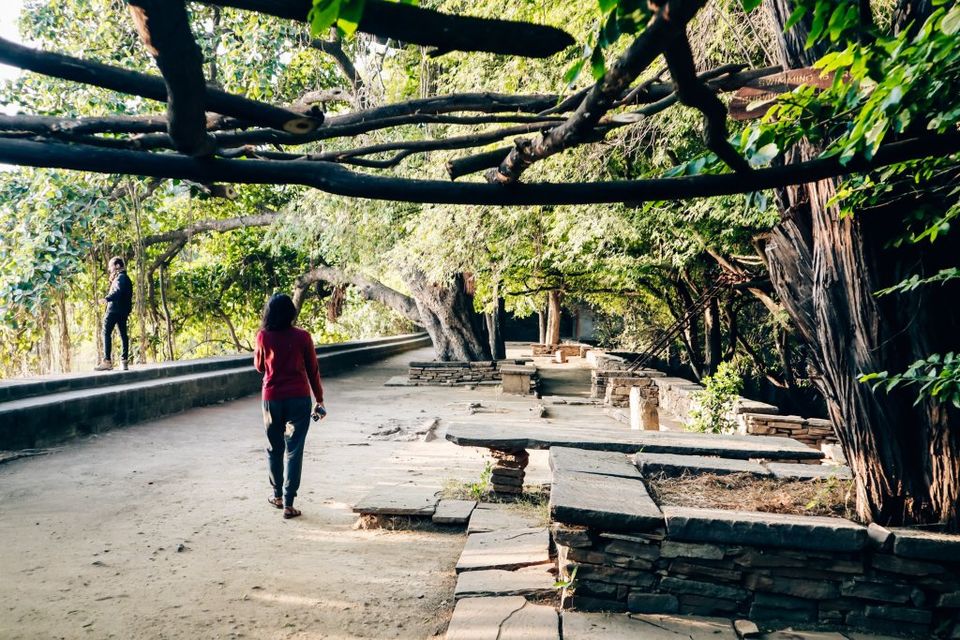 It was pitch dark and freezing cold that morning. As we drove through the desi and pardesi bavad trees, I spotted a caution sign by the road that read 'leopard crossing' (oooohhh). After reaching the highest point, we sat there waiting for the sunrise as the cold kept lashing at us, silently wishing upon two-three shooting stars we spotted (the Geminid meteor shower ended that morning). The sky slowly turned pinkish-orange and the outlines of the surrounding hills became visible. The lake in the valley below was shining like molten silver and the windmills in the distance were in full swing. It was the most beautiful sunrise and the moonset I'd witnessed in a long time.

The silence was broken by the sound of a motorcycle approaching us. It was Isab Bhai, the Rakhaliya (caretaker) of the forest, with his son sitting behind him holding a hot tea kettle. The tea arrived and we toasted to more sunrises like these

Our host Shriraj from @The Bhuj House organized this as a farewell and- I like to think- also to make up for my slight disappointment at not being able to see the meteor shower the previous night as the full moon dominated the night sky. It was a magical morning and waking up at 5:00 am was totally worth it 🙂Chadva Rakhal is private forest about a 30 min drive from Bhuj town near Samatra village. The forest belongs to Maharao (the last king of the Kutch kingdom). The wildlife here is limited to a few leopards, Neel gais, several birds- both resident and seasonal guests, crocodiles that often take a sunbath in the Pragsar lake and a few horses here and there. If not the leapords, its easy to spot a few Neel gai's amidst the sparsely spread bavad trees and the crocodiles chilling in the Pragsar lake.

Tags: Offbeat things to do in Kutch, Gujarat tourism, Hidden gems of gujarat, Kutch beyond rann of kutch, Kutch destinations.