Somnath, Sardar and Shankaracharya – a Rare Blend of Spirituality and Politics

The road from Dwarka to Somnath (Veravel, Gujarat) was perfect in all respects. No potholes, not much traffic, smooth driving. Windmills and water bodies on both sides. Innumerable migrant birds. We reached our hotel at sunset, checked in and retired for the day.

At 7 a.m. the next morning we went to the famed Somnath Mahadev Temple and were flabbergasted to find a huge statue of Sardar Vallabhbhai Patel on the premises. We were told that when the Govt. of India was unwilling to allocate funds for rebuilding the shattered temple, Sardar Patel took the initiative to collect money from the general public and thus a new temple was built on the spot where the ancient temple had once stood. This is the very temple that Mahmud of Ghazni had attacked and looted in 1026. The sacred jyothirling was supposedly wrecked by the invaders. The temple, however, was back to its original splendour within 12 years. Al Beruni (who accompanied Mahmud on some of his expeditions) has recorded that the temple was on the seashore and the idol was bathed by the waves at high tide, thus enabling the Moon to offer his devotions to his Lord(Shiva). The temple was again looted by the army of Alauddin Khilji in 1299. Later the Mughal Emperor Aurangzeb ordered its demolition in 1665 and again in 1707 (obviously because the first order was not implemented), but death soon took him away.

The present temple is neatly maintained and well organized to manage crowds. There is a place for everything. You can place your footwear anywhere (no payment required) and no one will steal it. Cellphones are not allowed- that was a great disappointment. However, a battery of photographers was present at the entrance, closeted in a very narrow, gated enclosure, and eager to take pictures of the tourists showing the temple in the background. I asked one of them whether he could take a picture of the temple alone. He looked doubtful, so I agreed to place myself in one corner of the frame. The result is shown below. 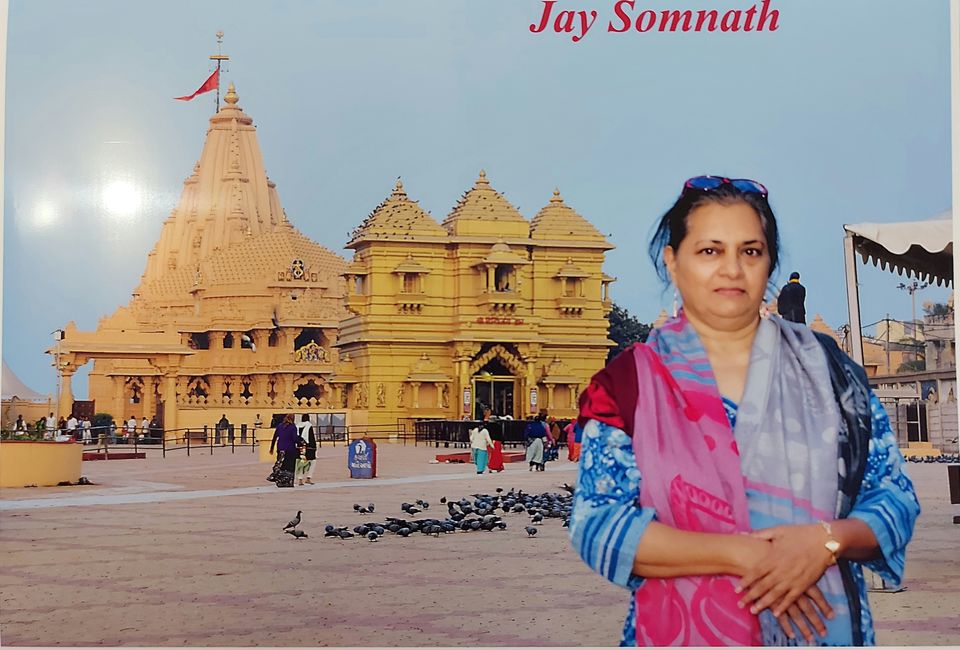 The seaside temple is a delight to behold. As we were early the crowd was not overwhelming, and we were able to see everything - the idols, the priests, the pujas going on, the spectacular view of the temple from the seashore. Yes, Sardar Patel had done something really good by building a new temple. To some extent he had managed to wipe out the pain of the original loss. But in my opinion the demolition of the ruins of the old temple was not a good idea. They ought to have been preserved. British officials in the 19th century have recorded that the ruins had a semi-Mohammedan character and nearly all the sculptures were mutilated, so perhaps the structure was thought to be beyond redemption.

The legend associated with the temple is rather quaint. Chandra, the Moon God was married to the 27 daughters of Daksha Prajapati, but he was partial to Rohini and neglected the others. Daksha promptly cursed him - and he lost his divine radiance. (Another version says Chandra contracted leprosy.) Lord Brahma advised Chandra to go to the Prabhas Theerth and worship Lord Shiva. Chandra did as he was told and soon gained redemption, whereupon he built a golden temple at the site (Prabhas Patan near Veraval in Saurashtra). There are other traditions claiming that Ravana built a silver temple and Lord Krishna built a sandalwood temple.

The ancient temple is said to be the first of the 12 jyotirlings found in India. In the days of yore Veravel was a major port and people from here sailed to east Africa and even China for trading. It is believed that during the heyday of the Indus Valley civilization there was a flourishing port city here (2000 to 1200 B.C.E.). 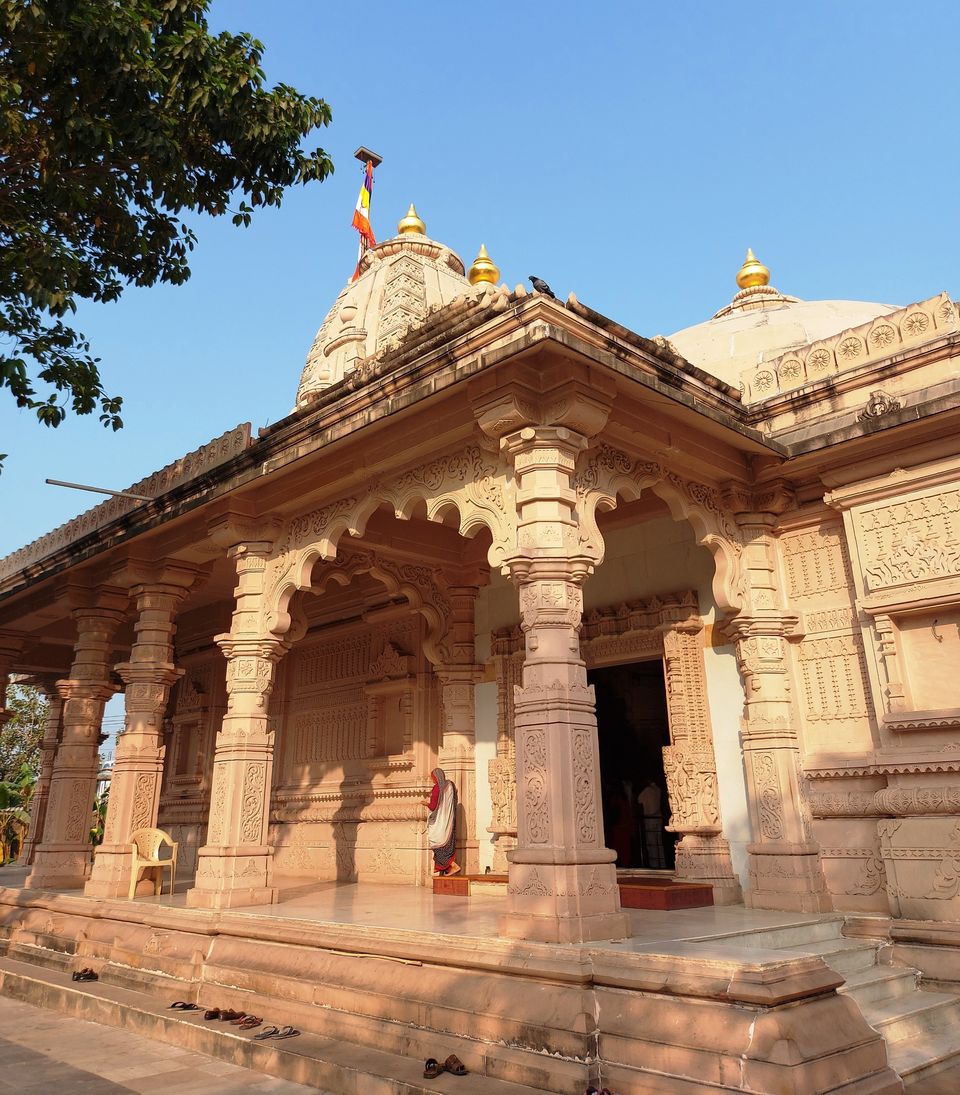 Krishna holds up his wounded leg 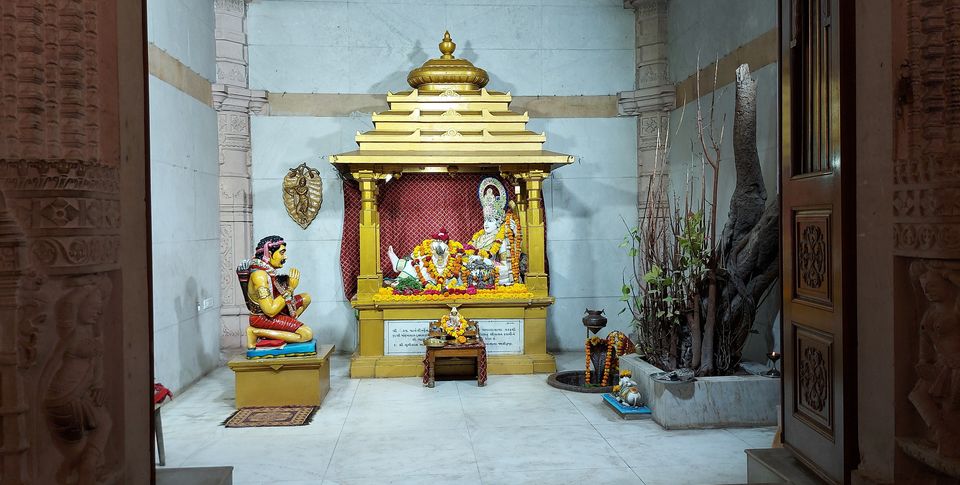 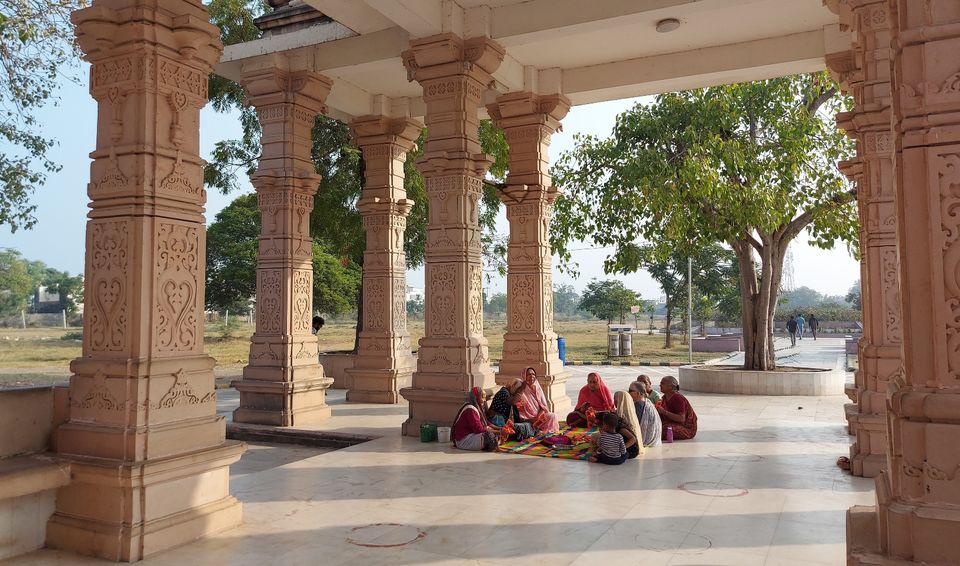 We also visited Balkha Theerth, where the hunter’s arrow is said to have pierced Lord Krishna's foot to trigger the culmination of his human avatar, and the Gita Mandir where his last rites are said to be performed. In both these temples the Krishna idol is fair-skinned, unlike Dwarka, where he is jet black. 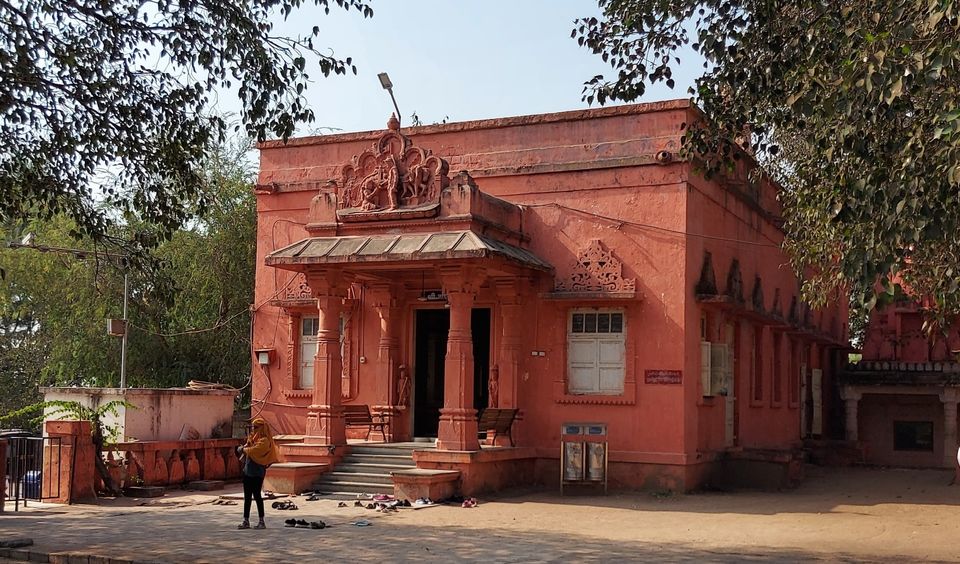 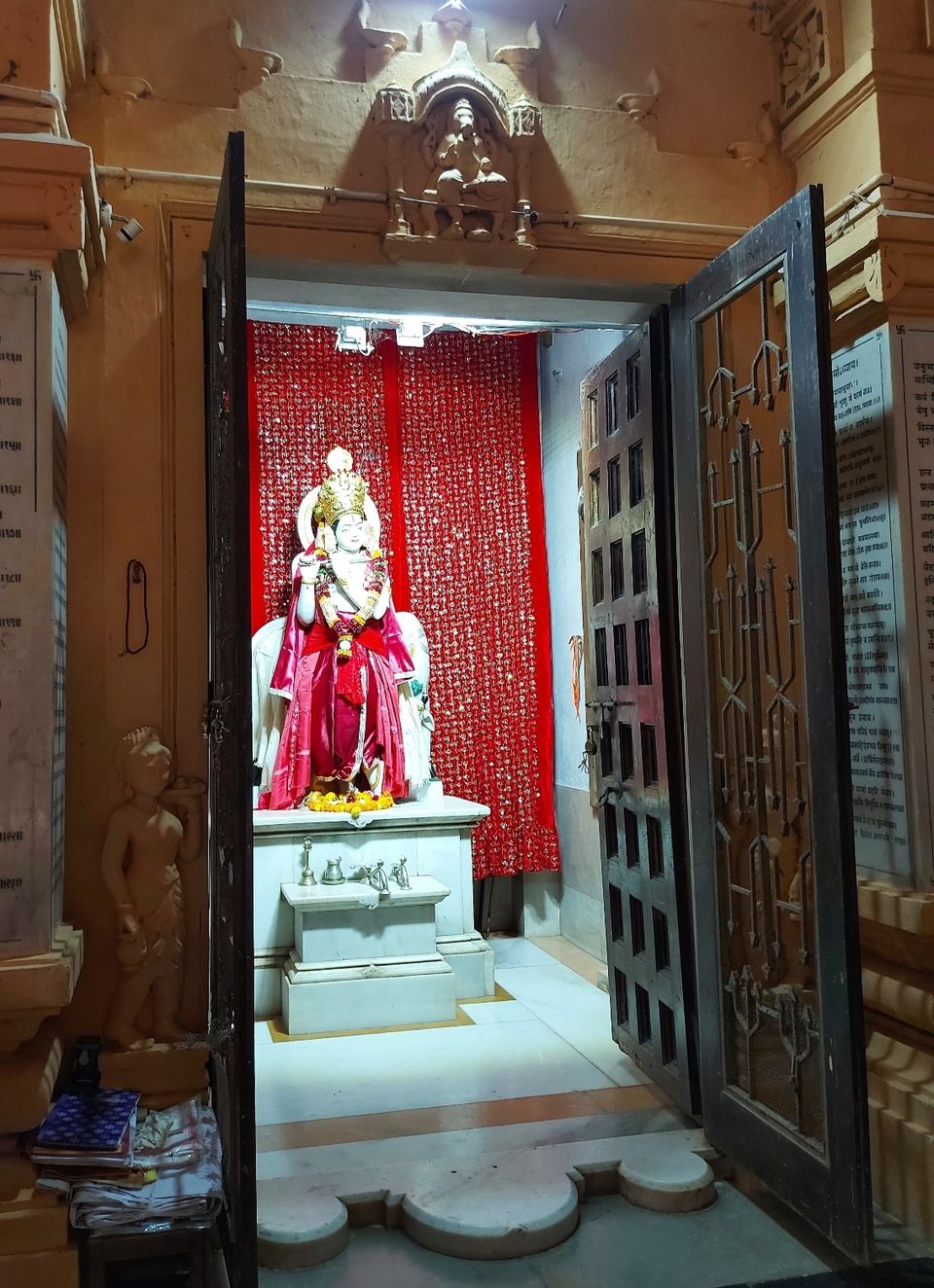 Somnath also has a Triveni Sangam where the Hiran and Kapila rivers merge together with the mythical Saraswati. We took a boat ride to the fusion point. There were hundreds of seagulls around the boat jetty. It was fun. 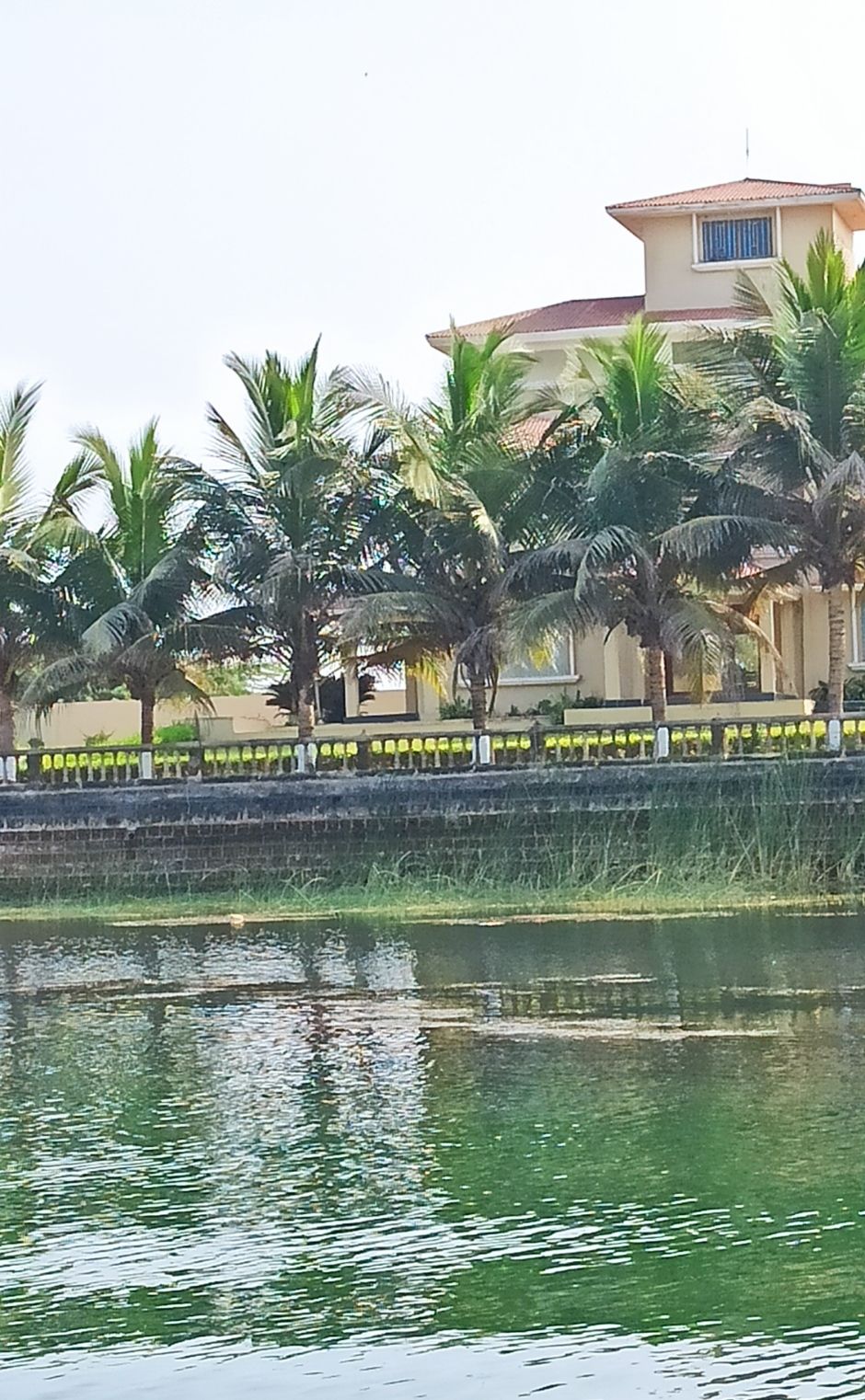 The Pandava Cave and the ancient Surya Temple are worth visiting. The environs of the latter are revolting though. There is evidence of abject poverty all around and the temple seems to be withering away. There is a Suraj Kund deep down and a steep flight of stone steps leads down to the water.

Weathered by the ravages of time 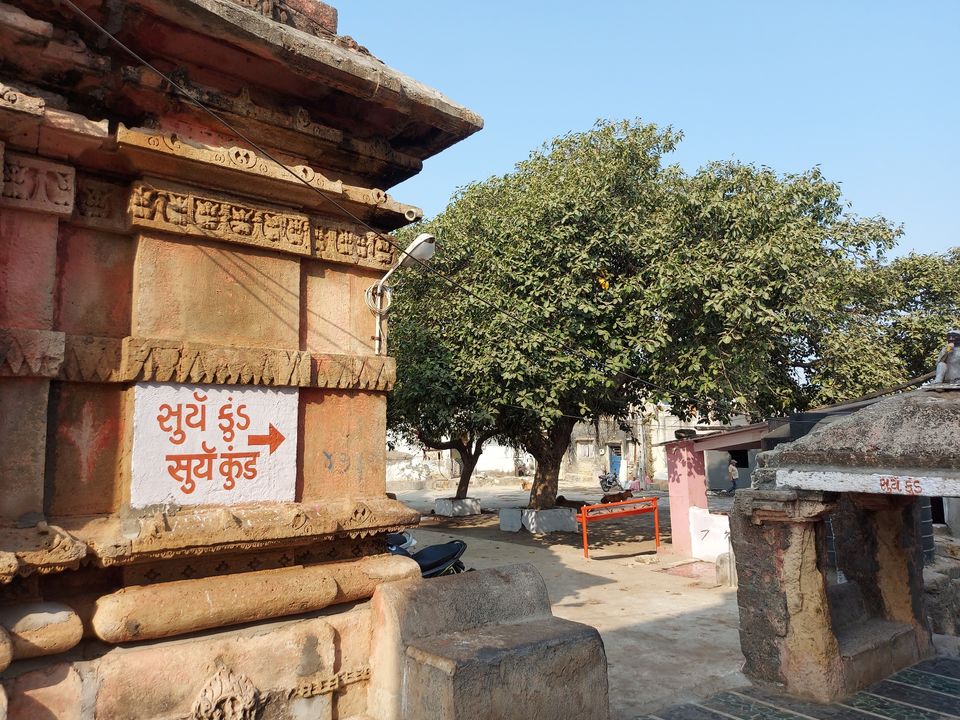 Steps leading down to the water 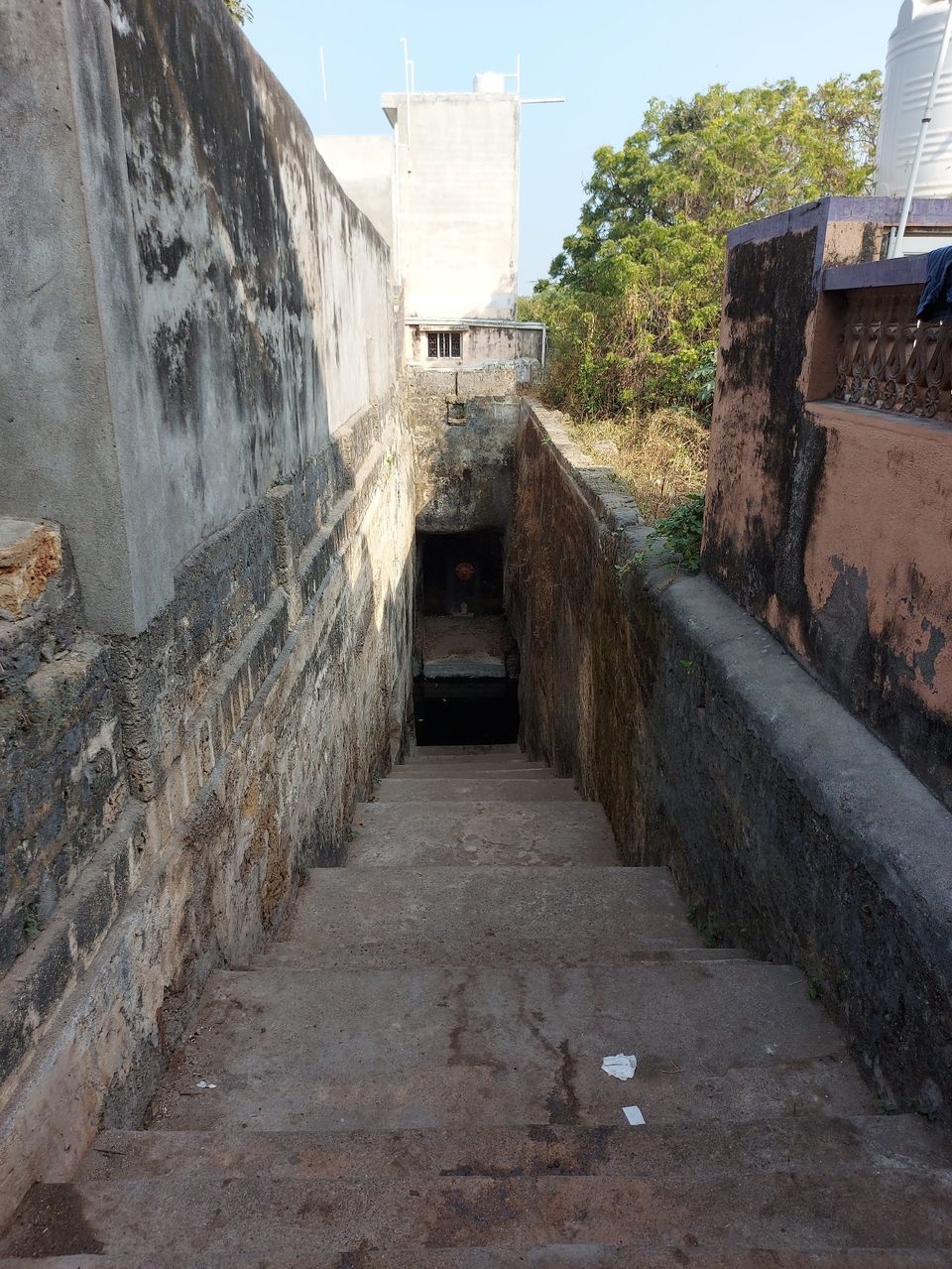 The old and the new 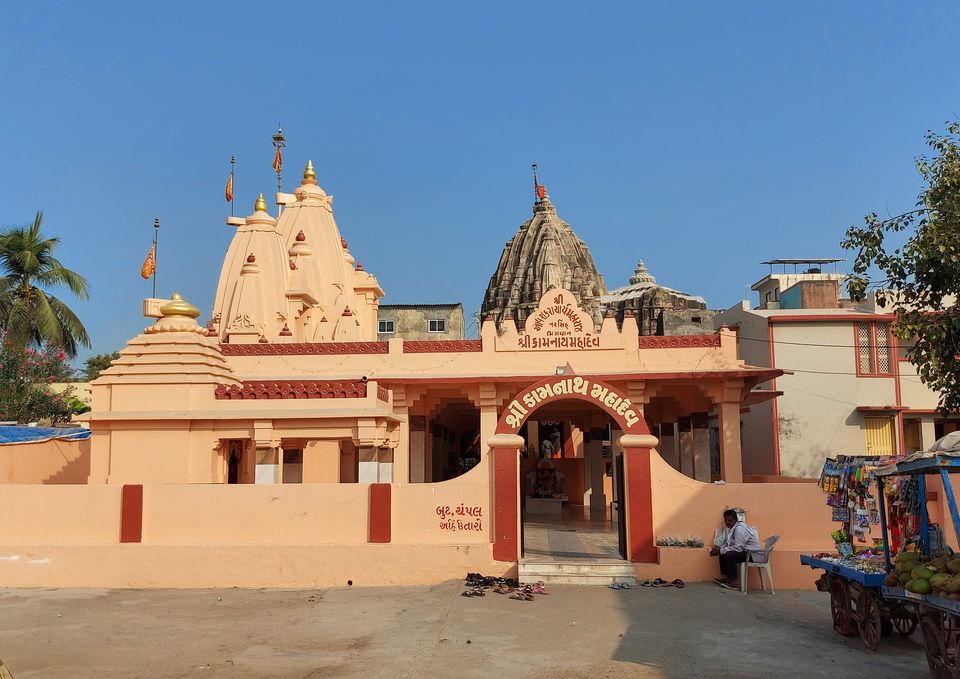 We also came across a small cave inside one of the many temples where images of Adi Sankaracharya and his disciples were reverently placed. I had to sit on the ground and crawl inside. The priest at first said photography is not allowed, but when he realized where I had come from, he relented. I told him I had come from the homeland of Shri Shankaracharya. His initial response was, “Impossible!” I insisted it was true. Then he asked “Keral?” I nodded. He then welcomed me with folded hands, asked me to sit down in the cave, and took out a saffron and red colored thread to tie around my wrist. At the same time he asked, "Gothra?" I answered, "Kshatriya" as I held out my right hand. He looked doubtful. “Left hand for suhagan,” he told me. “Nahi, vidhwa! (No, widow!)”, I insisted. He looked surprised, as he tied the thread on my right wrist. I wore no bindi, no mangalsutra, no other sign of being a married woman who is enjoying the company of a live husband. Did I look too happy, I wondered. He gave me a bunch of threads to give to my family members. I thanked him and crawled out of the cave. 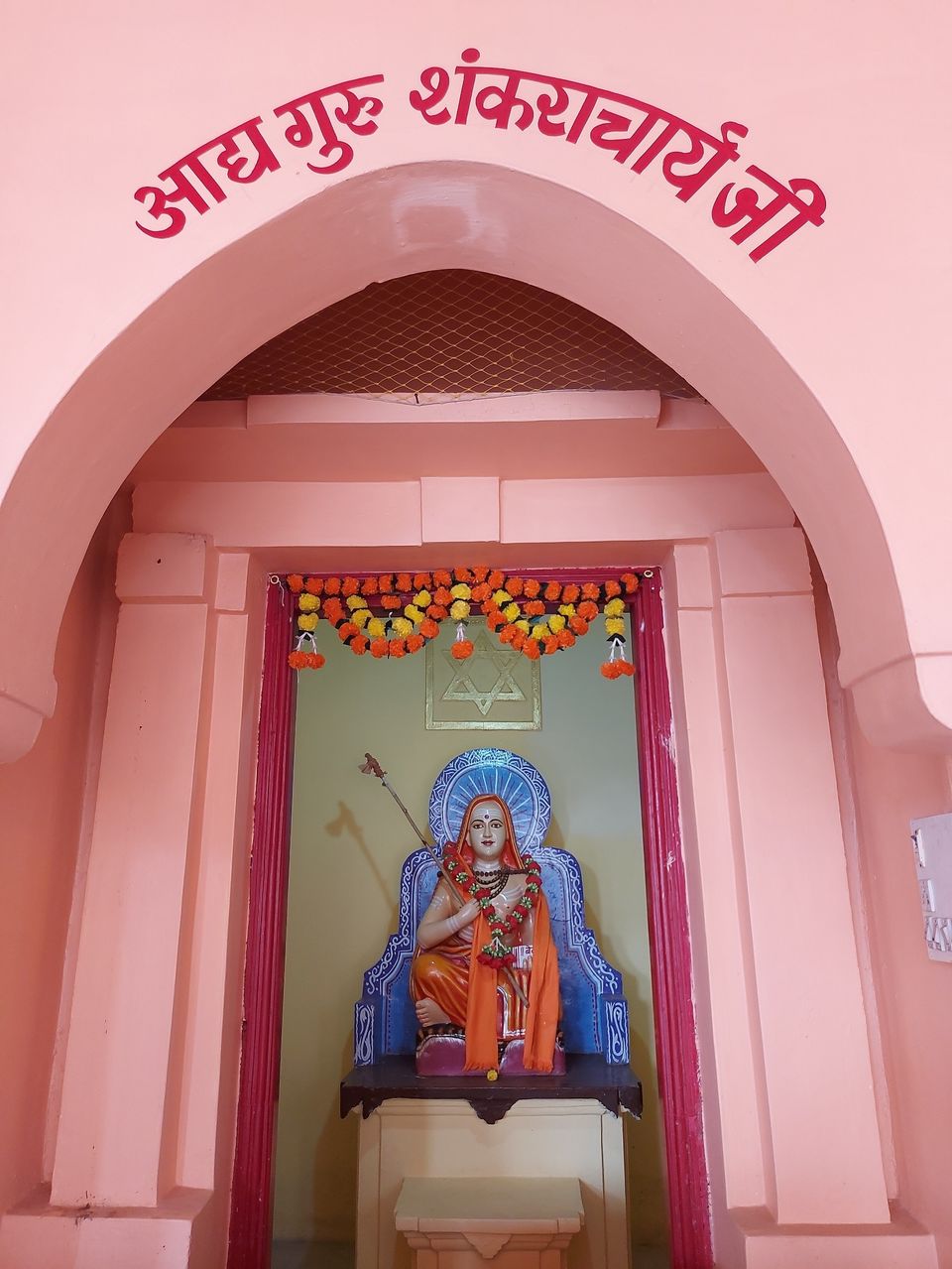 Cave with Adi Shankara and disciples 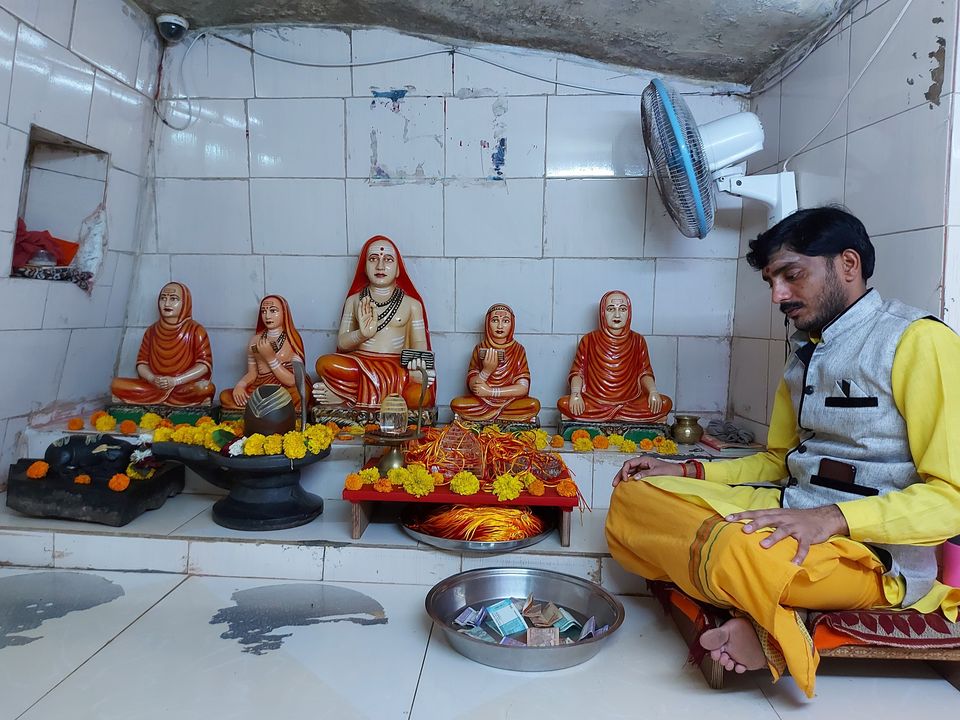 When we stumbled upon another cave, this time too narrow to accommodate my medium bulk, I opted to send our driver Solankhi in my stead. I gave him my cellphone to take pictures. I told the woman guarding the entrance that we had travelled really far to come here. Shree Hingalaj Mataji was inside. I had never heard of her, so I checked out google when I got home and learnt that the original Hingalaj Mata temple was on the Makran coast in what is now the Balochistan province of Pakistan. It is one of the 51 Shakti Peethas, where parts of Sati Devi’s body fell after her horrific suicide. (3 of the Shakti peethas are in Pakistan today.) In India you find Hinglaj Mata temples in Gujarat and Rajasthan.

Solankhi prepares to crawl into the cave 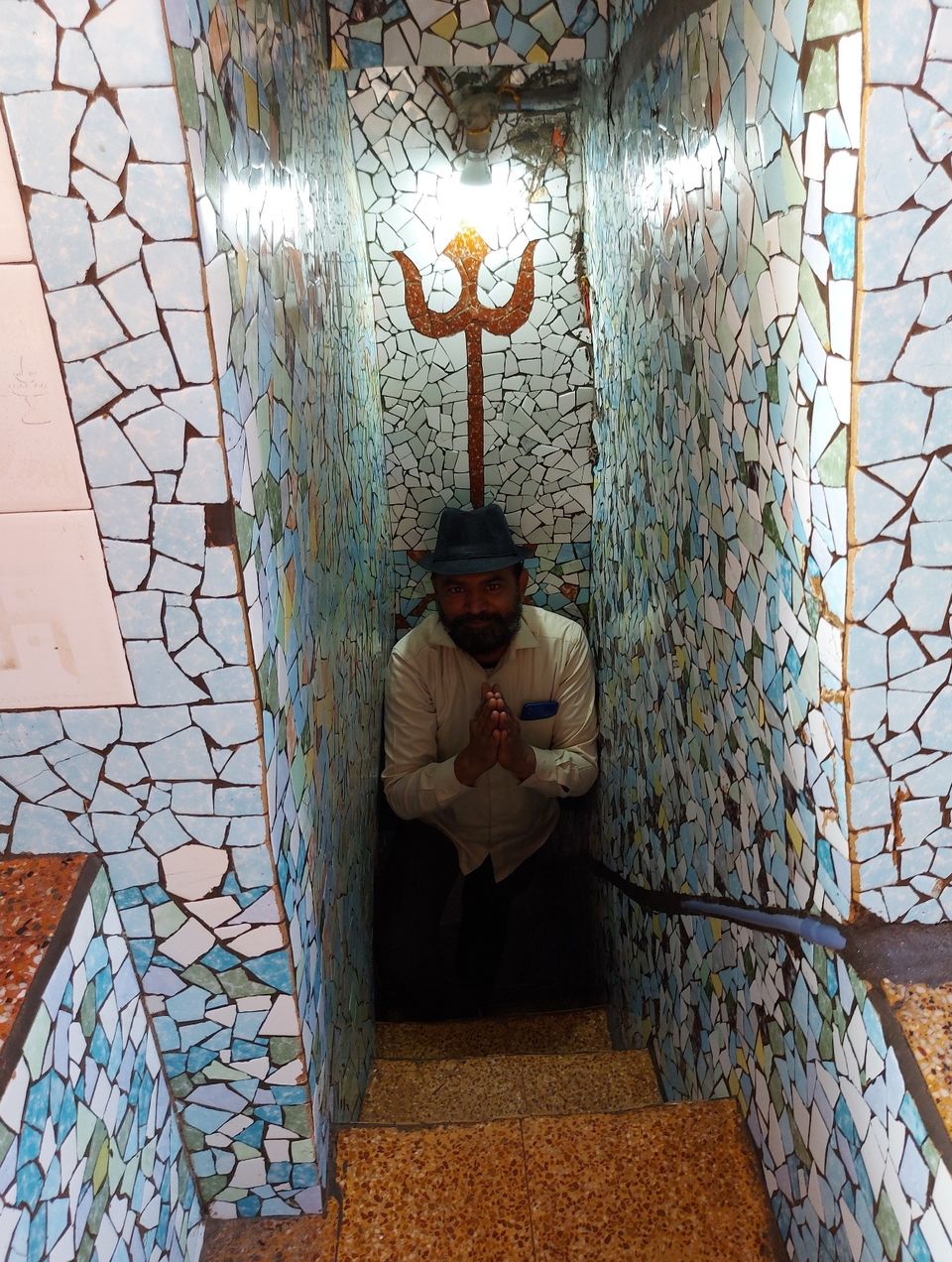 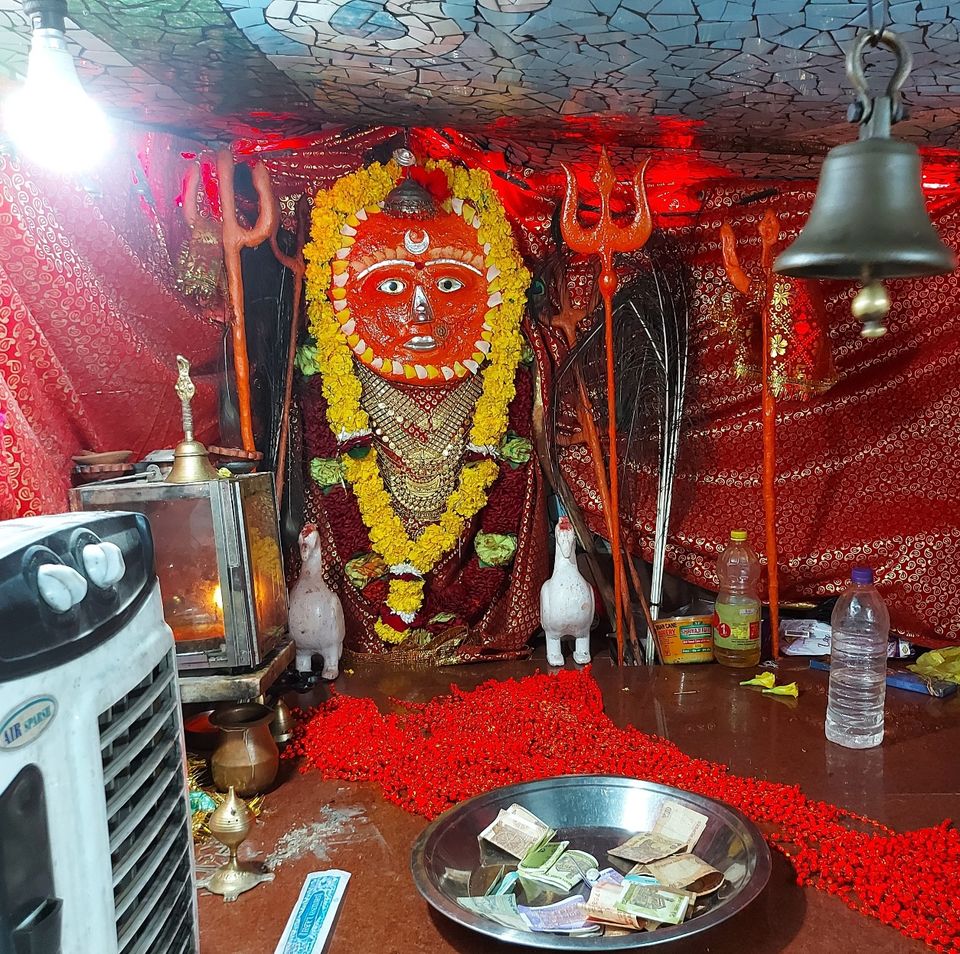 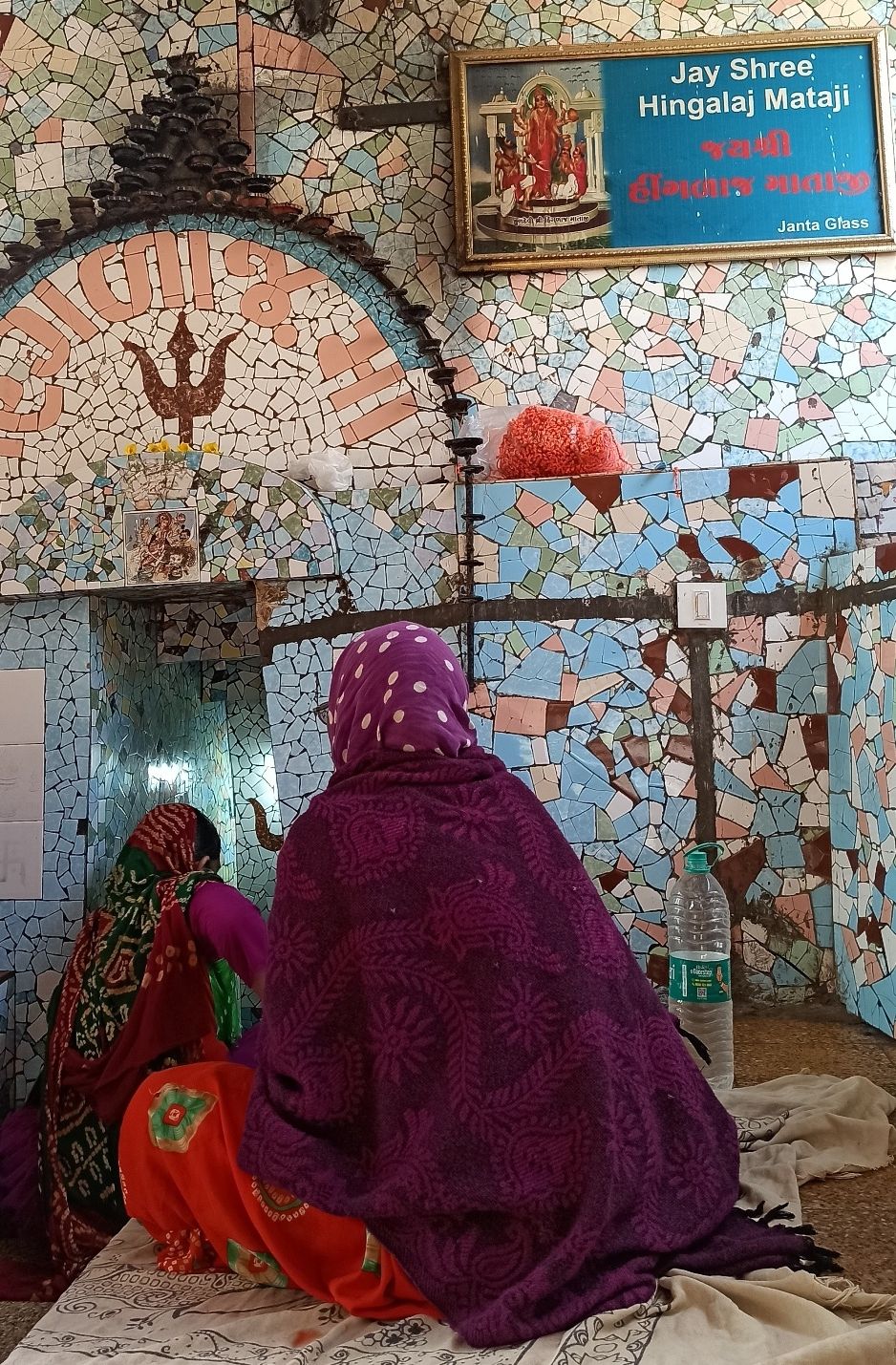 Solankhi led us to another small run-down shrine, named Veneshwar Mahadev Temple, which the ASI board indicated could date back to the 13th or 14th century. There were some recently built structures adjoining the old temple which has virtually disappeared. Legend has it that when foreign invaders tried to capture the local princess she took refuge in the temple, along with her companions, whereupon the shivling opened up and swallowed them. As the last of the women passed through its portals the shivling once again got back to its original shape, but a small strand of the woman's hair remained outside to tell the tale of the rescued maidens. The priest allowed me to check out the back of the shivling, which sure was different from the norm. See for yourself!

Back of the shivling 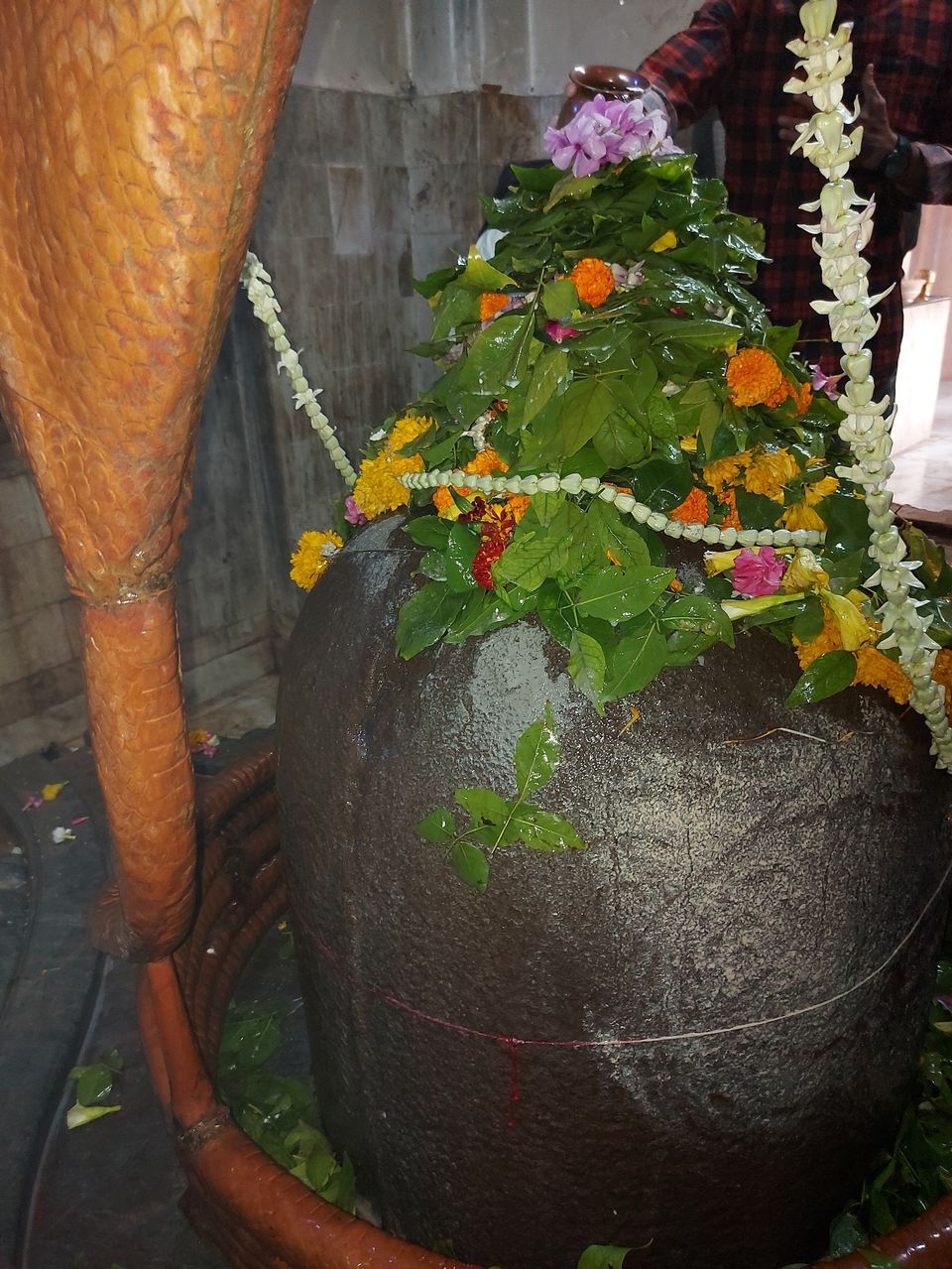 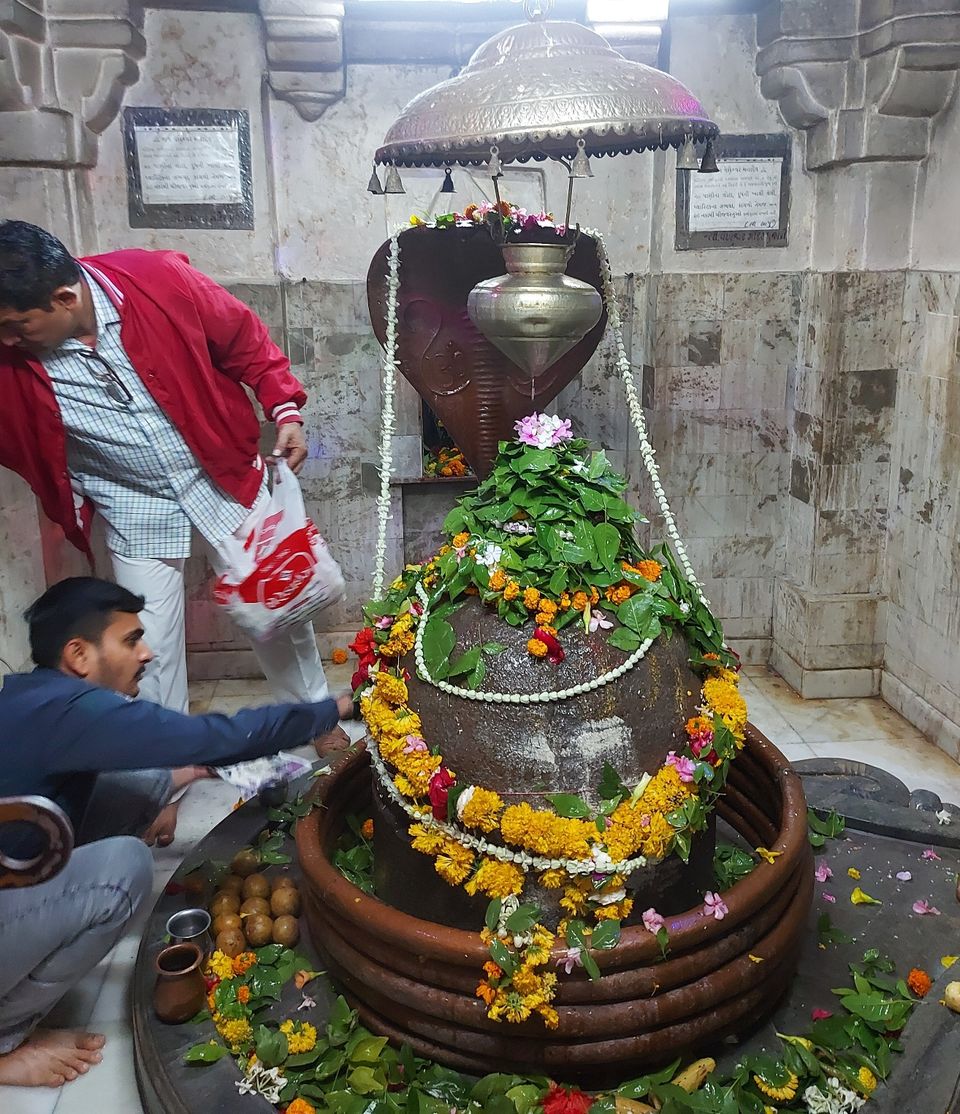 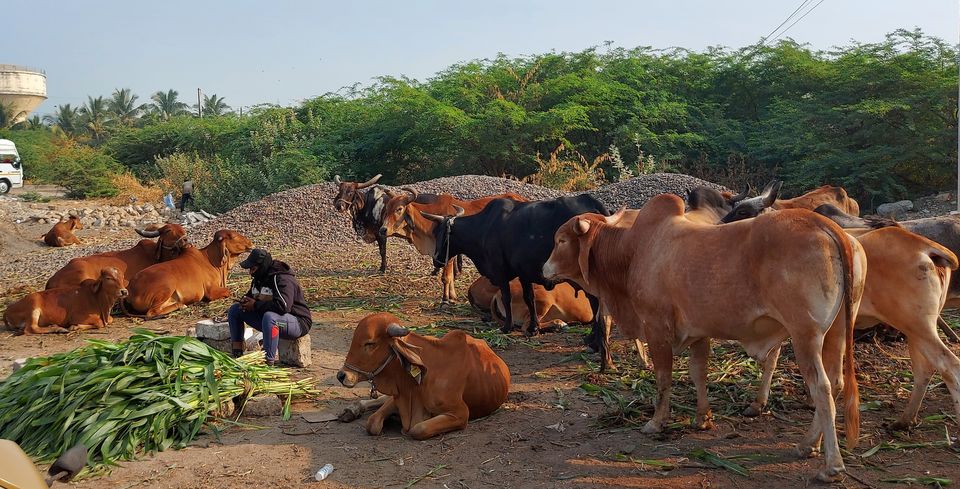