Rainy biking and windy diving in Hoi An

As we (I was now back with dear Ciara, my partner in Asian bike journeys) set to hop back on the red carcass of the squeaky bike we had hired, the clouds started to come true on their threat of rain. This wasn’t to be any rain, but magic rain which transforms humans in to drowned rats.

Now I thought that this being Asia, where tropical rain comes and goes as quick as Callum Best at a single’s party, it would be over pretty soon. So, sensing the imminent downpour, we stopped before it started, for a strong coffee in a derelict looking open café. It housed several old men, coughing away on cigarettes and Mahjong.

I’m uncertain how well I can explain but really, it was awful! Think, not one item of clothing or crevice in your body that hasn’t been molested by cold rain. Ciara’s bus was in two hours so we had no choice but to keep going through.

The drops filtered their way in to our mouths, tasting of field with a hint of buffalo poo. Not that I know much of the flavour of farm animal excrement. The storm got up our noses. It stung our squinting eyes and ran in such a fashion round my helmet that my wet hair crept along my moistened cheeks and worked its way between my face and glasses, so that I couldn’t see more than 4 meters in front of me.

When we clunked in to a petrol station somewhere outside of I-have-no-idea-where-I-am-please-help, the ‘20p’/Dong poncho I’d bought, which had ripped down one side, was now purely acting as a windbreak. It had kept me dry for all of ten minutes and poor Ciara who neglected to be such a spend thrift, hovered close, freezing on the back of my bike. I had offered to pull it up over the both of us, like some sort of waterlogged windproof bed sheet.

Finally, rolling in to Hoi An town, I praised,“Oh my Buddha we’re back!”

We were met with a scene from the film ‘The Day after Tomorrow’. Maybe it wasn’t that dramatic but nature certainly looked pissed at humans that day. Watching people push their flooded bikes along narrow rivers of streets, made me hopeful for steaming hot Pho. And a non-air conditioned room where my ears might clear of their post-diving clog.

Bike to My Son

Divine Hoi An A couple of days ago, when we were staying at the exceptionally lazy and beautiful HOSTEL, ‘Under the Coconut Tree’, out at Cua Dai beach, I went on a lil’ dive trip. Water logged itself in my ear canal during my first dive and in the words of Ed from Birmingham, I tried the “old hoppadeemus” to free it. It didn’t work, and 24 hours later, with the water still sloshing mildly in my head, I went to sleep in a very coldly air-conditioned room where it solidified.

After 55km my dead bum was gnawing at the edges of my patience. The road traffic requires you to keep your eyes in your rear, rather than on the scenery. The Han River flows next to much of the road. Sisterly jade rice paddies and twisting train lines on the opposition side quench a thirst in your eyes for sights you never knew you’d missed. It was however, still a relief to roll up to this vast red brick sanctuary and, after falling off my bike, sooth my posterior back to life. At the entrance a square squat hallway invited me in to pay and gain the background information, contrastingly modern against the Monkey Bridge out front, that lead the 2km to the great temple exhibition. -- A cacophony of grasshoppers played me down the lane to the first ruin. To walk on these stones is to step back in time. To walk in the foot-steps of past emperors and deities. How magical, to think of it all in former glory back in those early years. 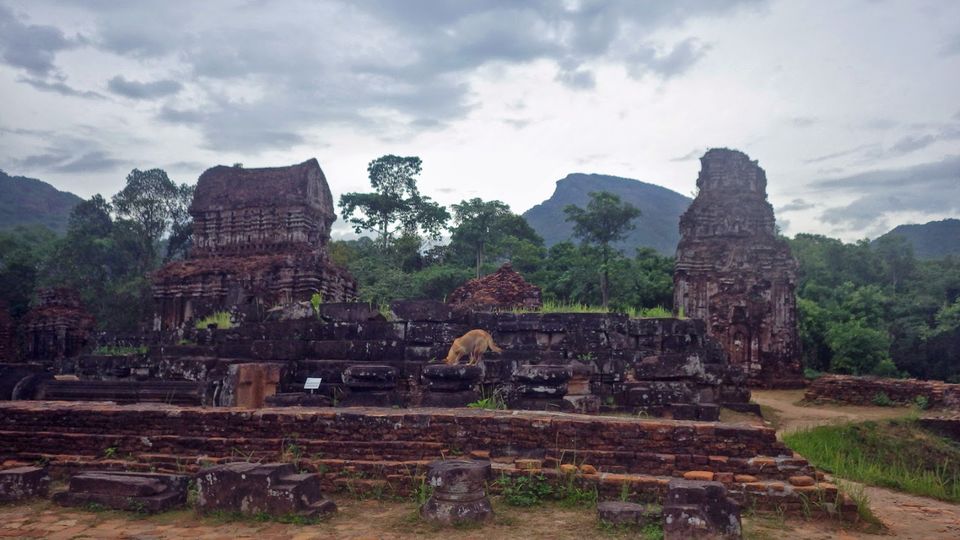 Little more than 55 kilometres from Hoi An lies the ancient Champa-built ruins of My Son. Built from the 4th to 13th centuries with its’ roots owed to Indian Hinduism, My Son was declared a UNESCO World Heritage Site in 1999.

I skipped through a lot of country from Hanoi to be here, by way of two weeks spent helping a thankless invalid. I might have been on my way to Cambodia, as originally planned. But who sticks to an original plan these days? I hopped over going to mountains in Sapa, or running through caves in Ninh Binh, and stopped for a walk through Hue’s old war- ravaged citadel, on the way to historic Hoi An. The Viet 'Cong' (the American label for the guerrilla troops of South Vietnam and Mekong who fought alongside the the North Vietnamese), had given the yanks too much credit in assuming that they wouldn’t desecrate these momentous temples of Vietnamese religion and culture, in their bid to chase down Communism.

Holy places have a habit of making me wistful. I began to mull over whether I could ever leave Asia. Imagining myself another life where I am ‘settled’ requires decoding of the word itself. ‘To settle’. The verb defined in the Oxford dictionary with more than three meanings. Here are the top three: to reach a conclusion or agreement to a problem; to reach a decision; to come to a dissatisfactory acceptance.

To ‘settle down’ is to accept an unrealistic and bogus idea of existence. Even those who think their life is mapped out will find surprises, whether good or bad. And those whose definition of adulthood is based on ownership of some form (cars, careers, mortgages and kids for instance) are only defining their experience of the world through MONEY and possessions.

I don’t think that the Cham emperors of the past, when building their red mortar worshipping grounds, would have ‘settled’

Two flights two days later left me walking a little wobbly as I nervously handed over my passport at Bangkok passport control! As for the Diving… The prestigious, I use that term loosely, Cham Island Diving centre took me to, well, Cham Island. As beautiful as the sparse reef and clientele were, the guides and safety standards left a lot to be desired. Before I got on the boat that morning, no one had checked my dive creds, only our word. Which is fine, if you say you can dive and you can’t, it’ll become pretty obvious when you arse up a buddy check or breath from the wrong regulator. I can dive, I am also qualified to drift dive as an advanced open water diver, *salutes PADI. The thing about a strong drift dive is that if you don’t understand the basic idea of staying close to the bottom where the current is weaker, you may well lose your dive group. Which is pretty dangerous, in case that wasn’t obvious. Han, from Bulgaria, ended up thirty meters from the island. As the numbers of ours, and other groups, dwindled, we rose to the surface early. While Han was located my buddy and I were left to cling on to a large barnacle covered buoy and await the dive boat’s arrival. I will concede that they stuck to their duties in getting us all safely out of the sea, but they could have easily avoided losing clients and their fins by, A, ensuring we were all qualified to drift dive. B, actually checking that we were all genuinely certified to the right standard with experience in drift dives, C, taking us to a site with better conditions. 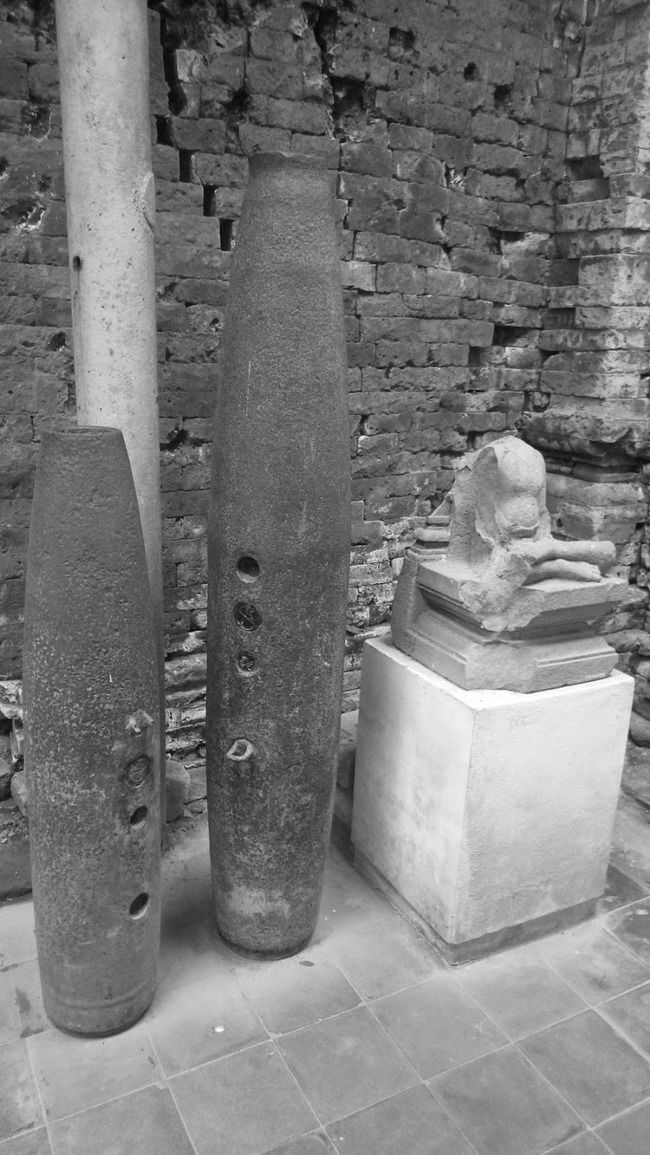