SPITI - A RIDER IS BORN

Every loop you had created, every move you had made was being studied. Studied by someone unknown to you and me.

Spiti was just a route I had planned. Stories I had heard about water crossings, bikes skidding and falling of the cliffs, cars getting stuck in water streams and on muddy roads, landslides on every mountain and hill!!

The risk was too much but the confidence was much more. Many of them asked if I had done a solo bike trip earlier. I lied that I had. Actually I never rode a bike for more than 100 kms on any day and on plain roads. But this lie boosted confidence in them and so did it in me. 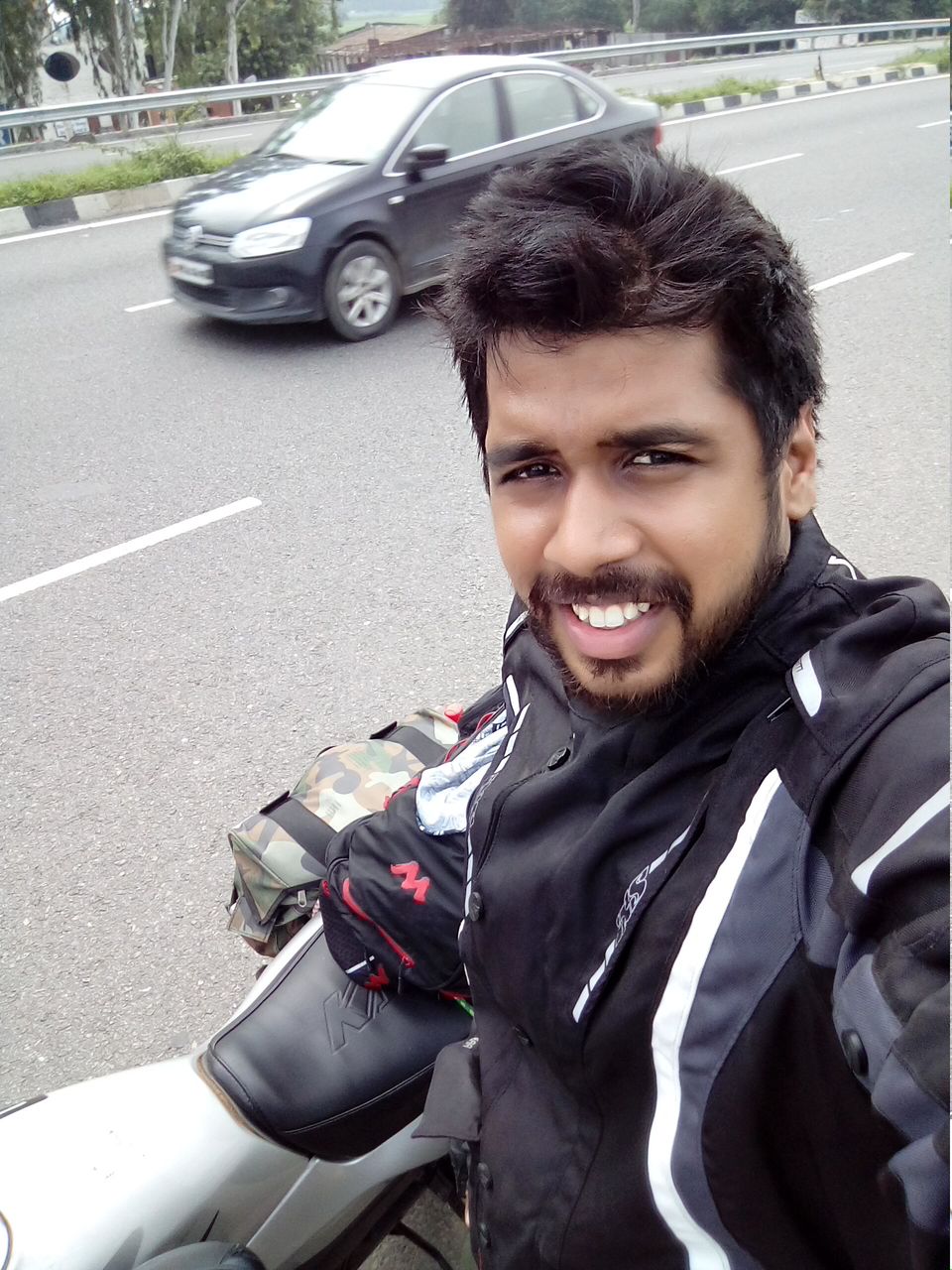 When you know you are entering heaven 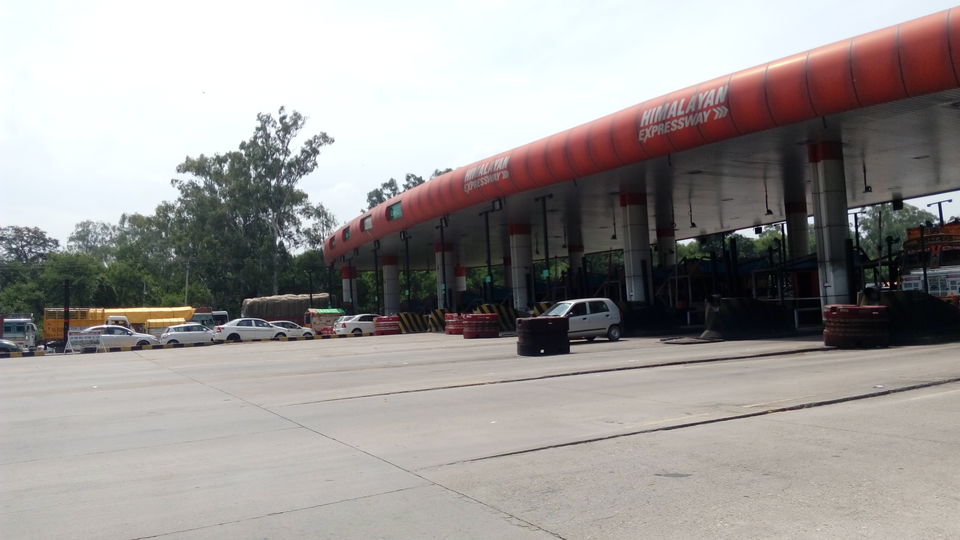 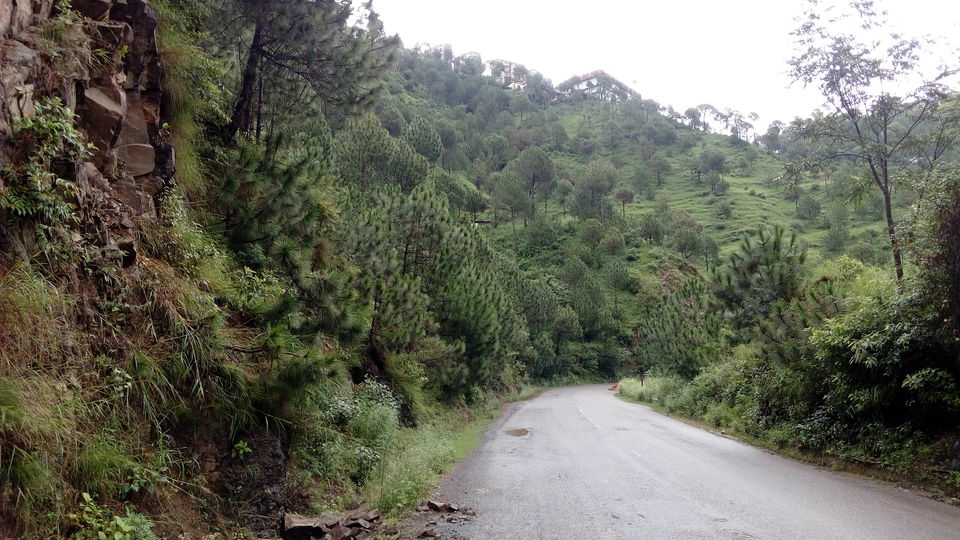 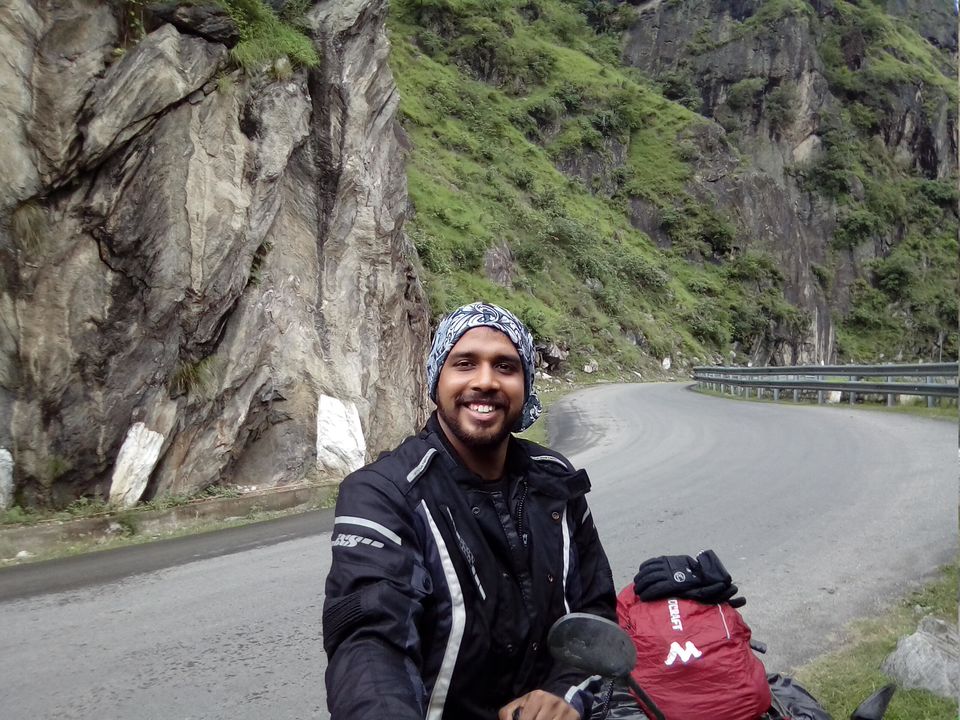 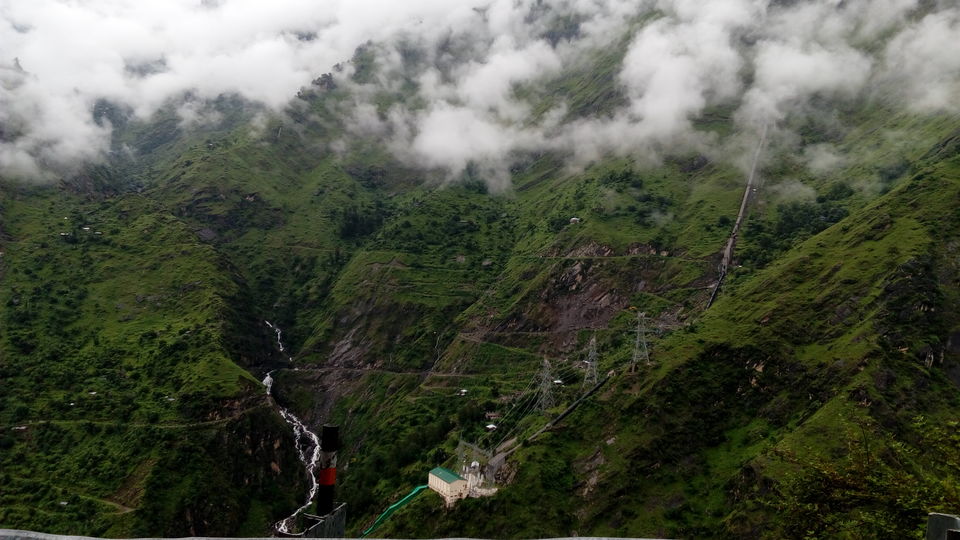 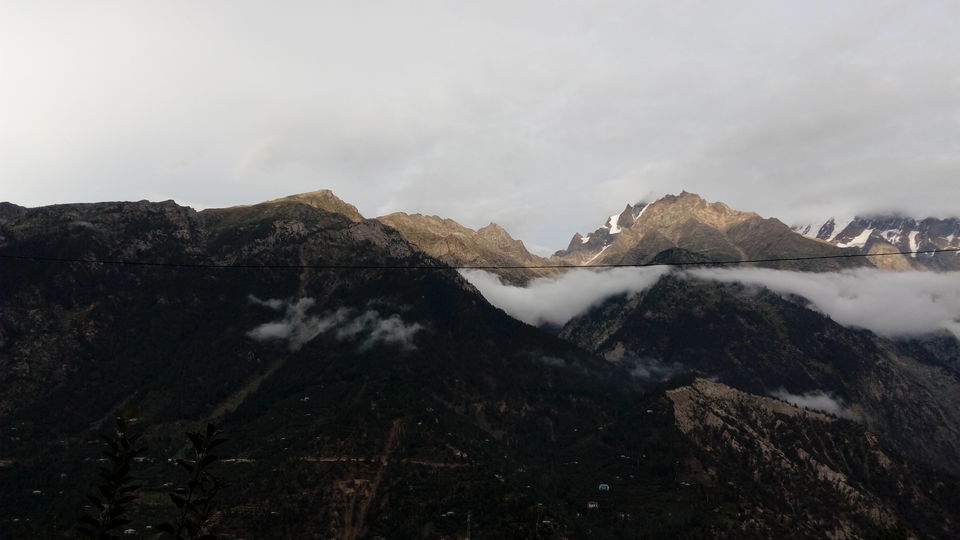 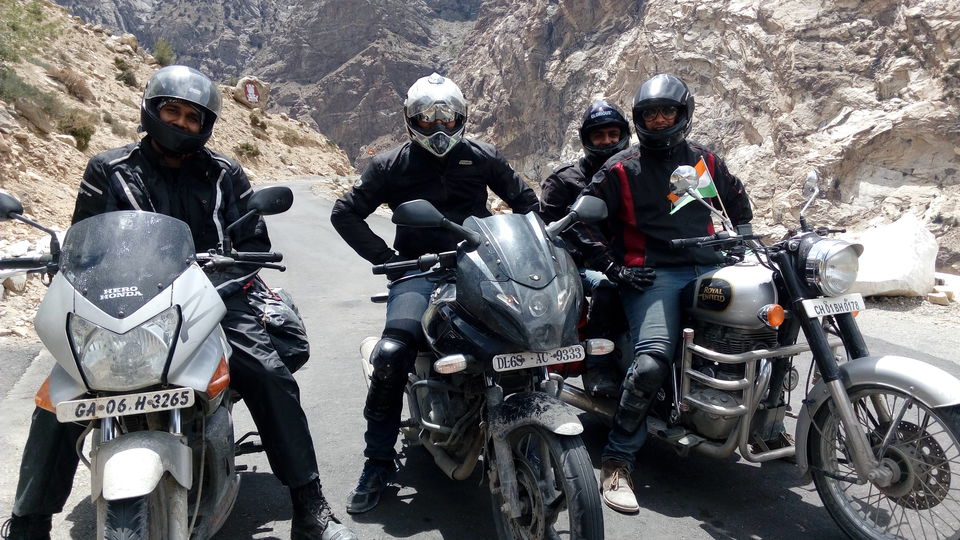 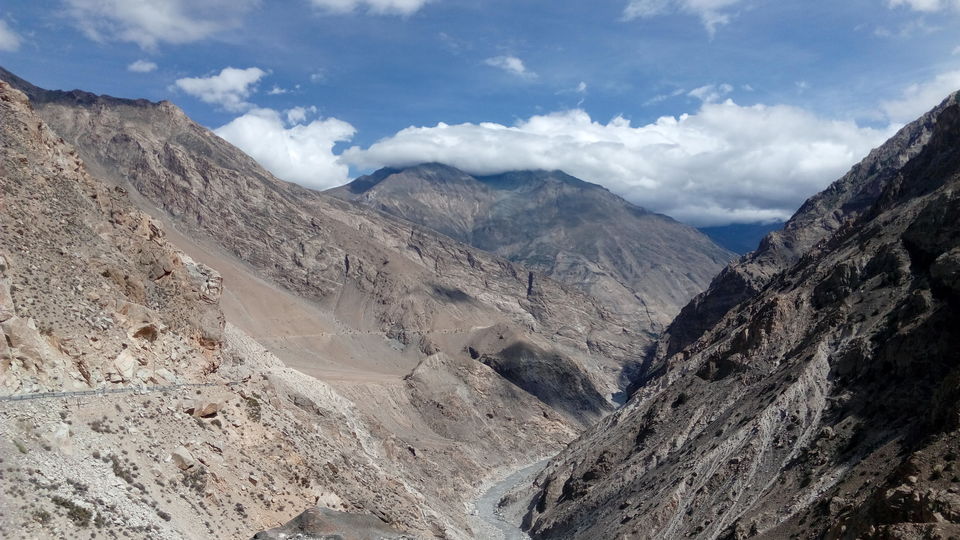 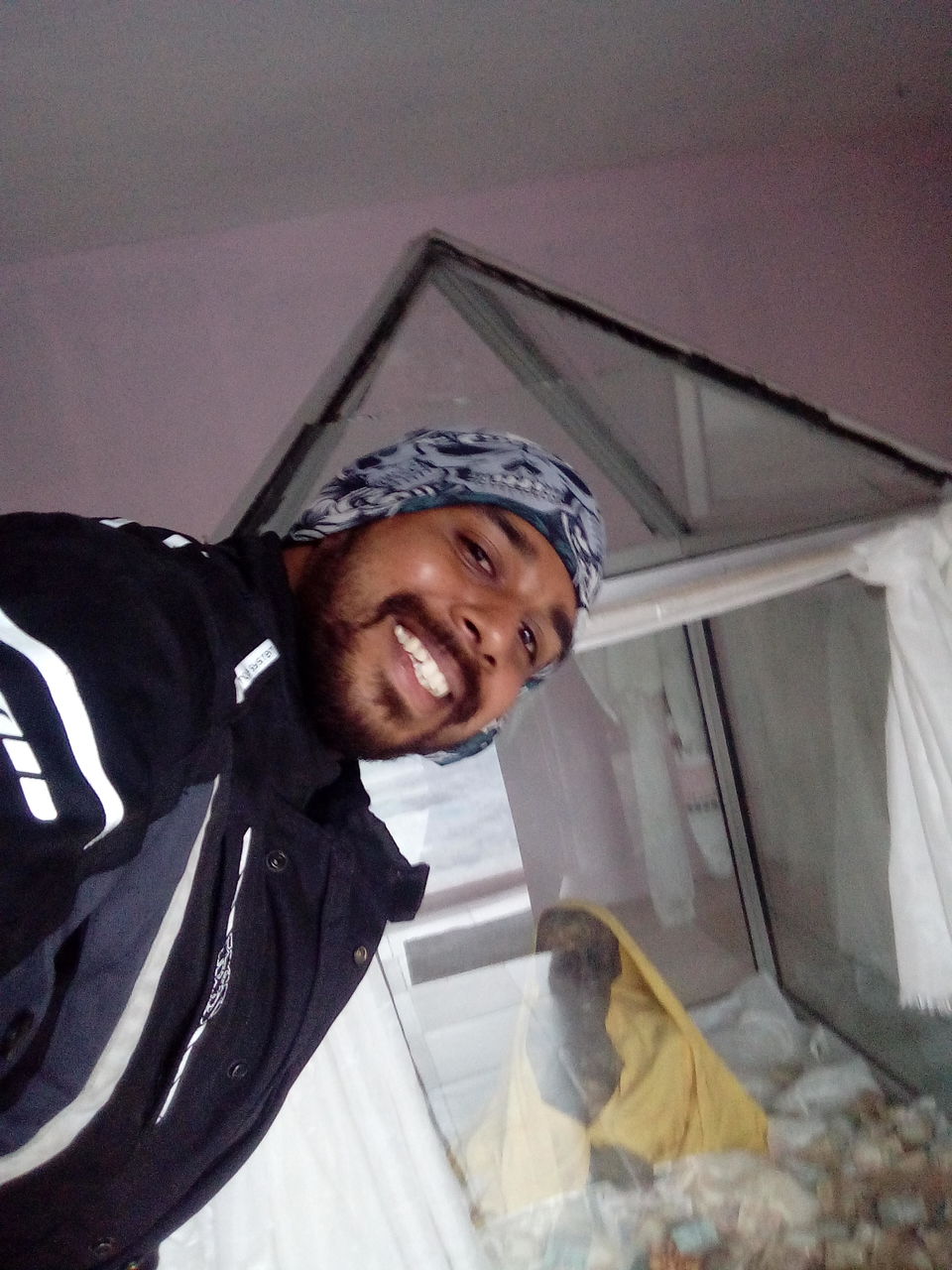 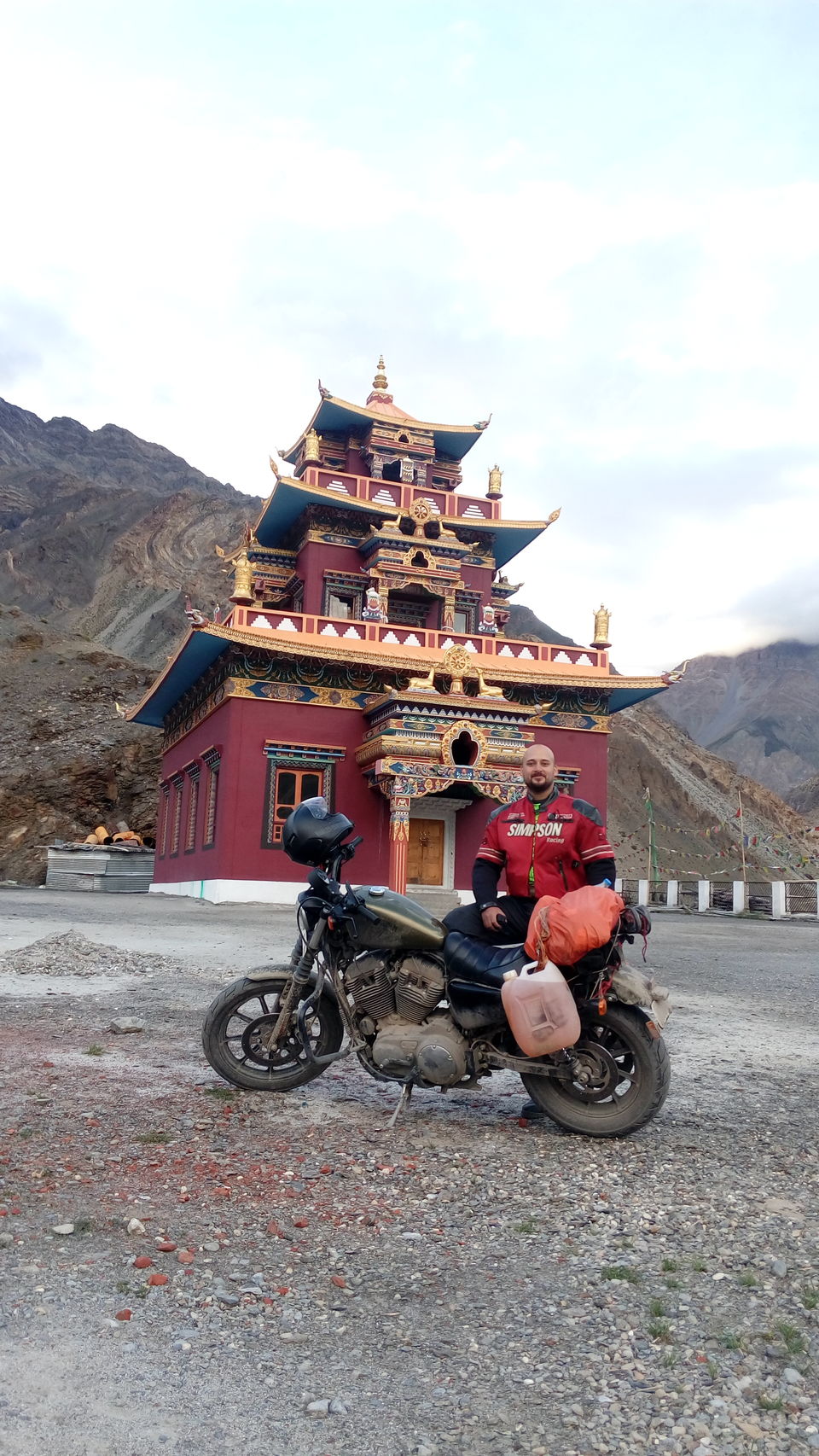 The view while riding towards Dhankar 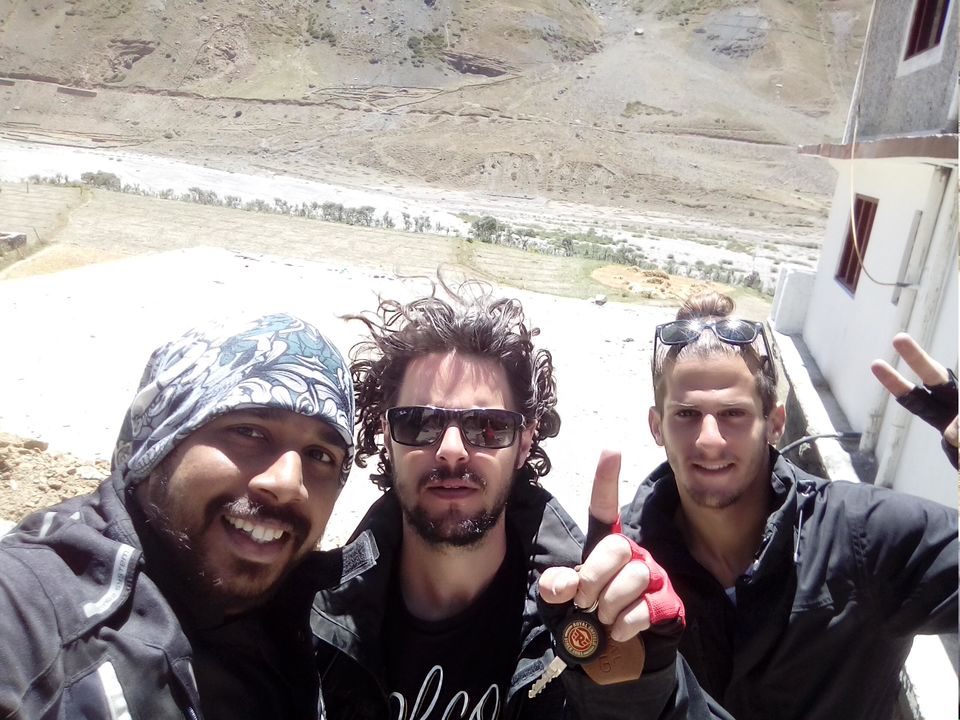 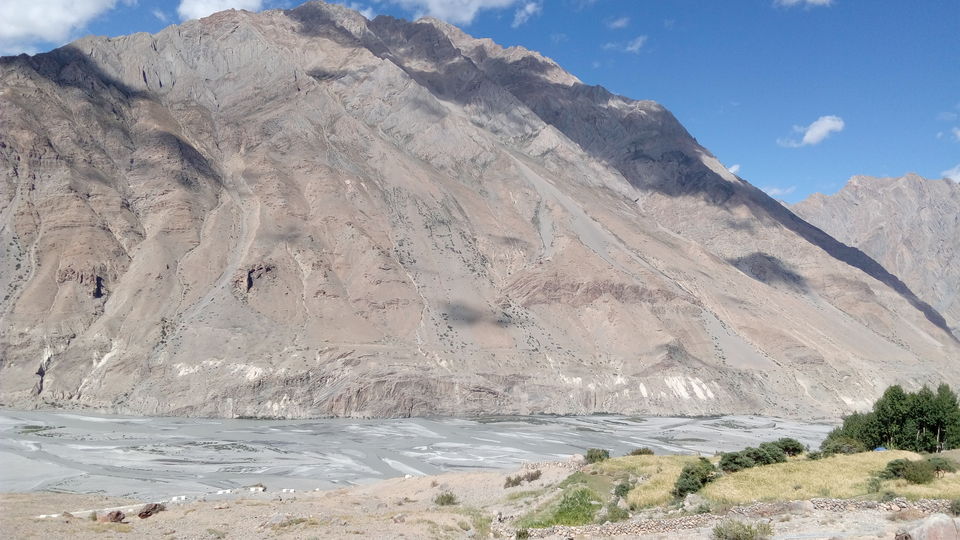 Mud, a place to stay back!!Dhankar!!! 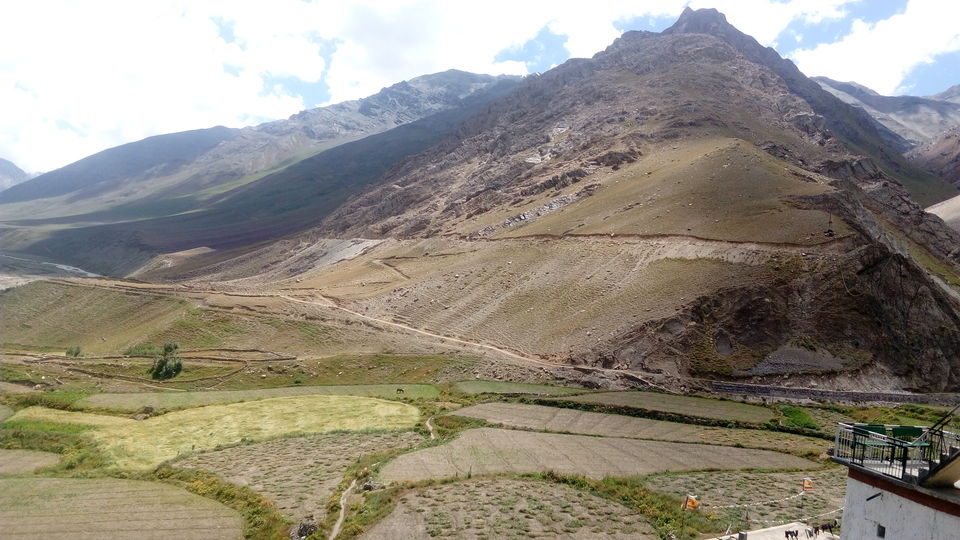 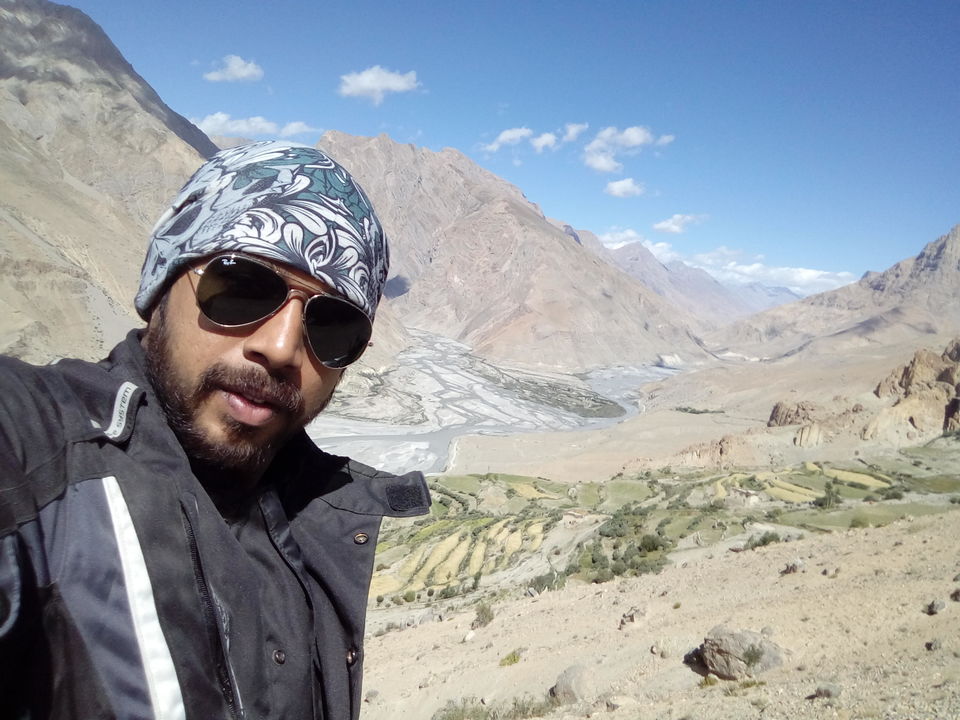 The weather was clear, rains had retreated. They had to!! I was above them now. Waterfalls, green mountains, clean roads (thanks to BRO- Border Road Organization). The two riders whom I had met on my way, I tagged with them for some part of the journey. Just before entering Lahul Spiti a diversion was seen towards the right. The unknown path led to the last India China border village Namgia. Champion company from Bihar Regiment stopped us. We were not allowed to cross a point from where patrolling would begin. Naïve question;” Is our bunker on that mountain in front? “The Army guy replied “They are watching you from there!” Goosebumps and a proud feeling of being an Indian. We smiled took a turn and continued our journey with a level of satisfaction that yes we are protected and being watched.

Nako was the point to rest. But who rests at 4 pm when the sun is till shining after 3 days. There I met this Harley Guy Mridul. Rode till 6 to see the Giu mummy and needless to say – One selfie with the mummy. Post this a ride I would never ever forget in my life. Rode In utter darkness dodging every pothole, mudhole, and riding on gravel at 40-60 kmph and damaging my front oil seal. Tabo was covered at 8 pm and the rest is a hot shower, hot soup and a view from my room of the great mountain. 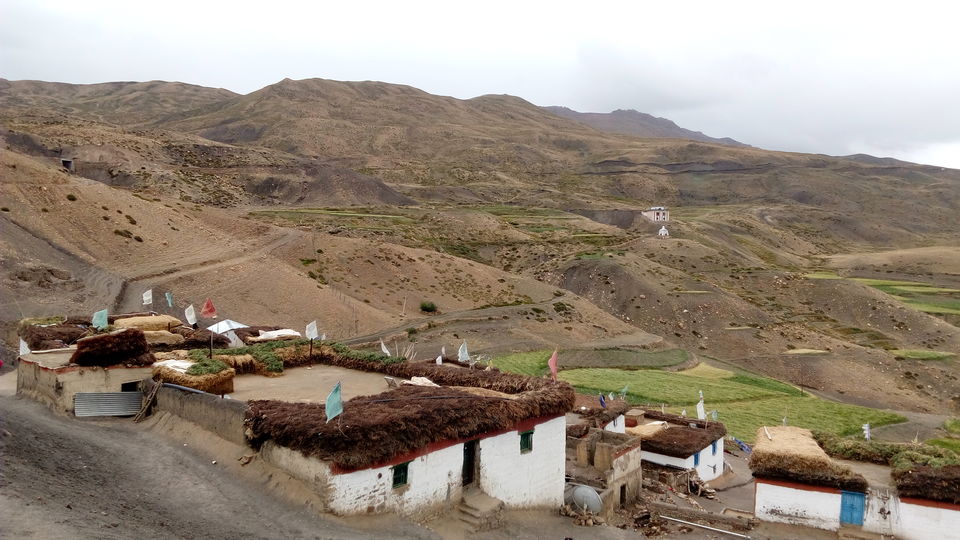 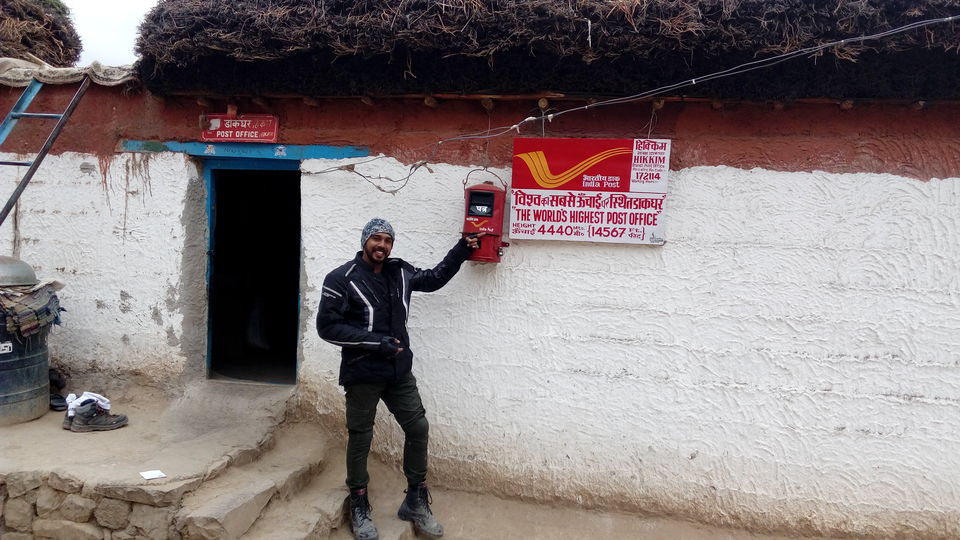 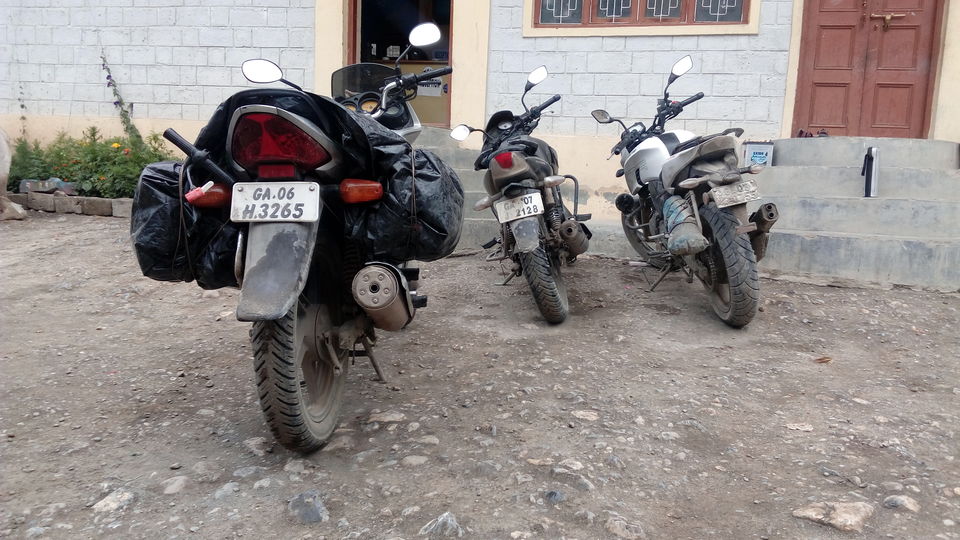 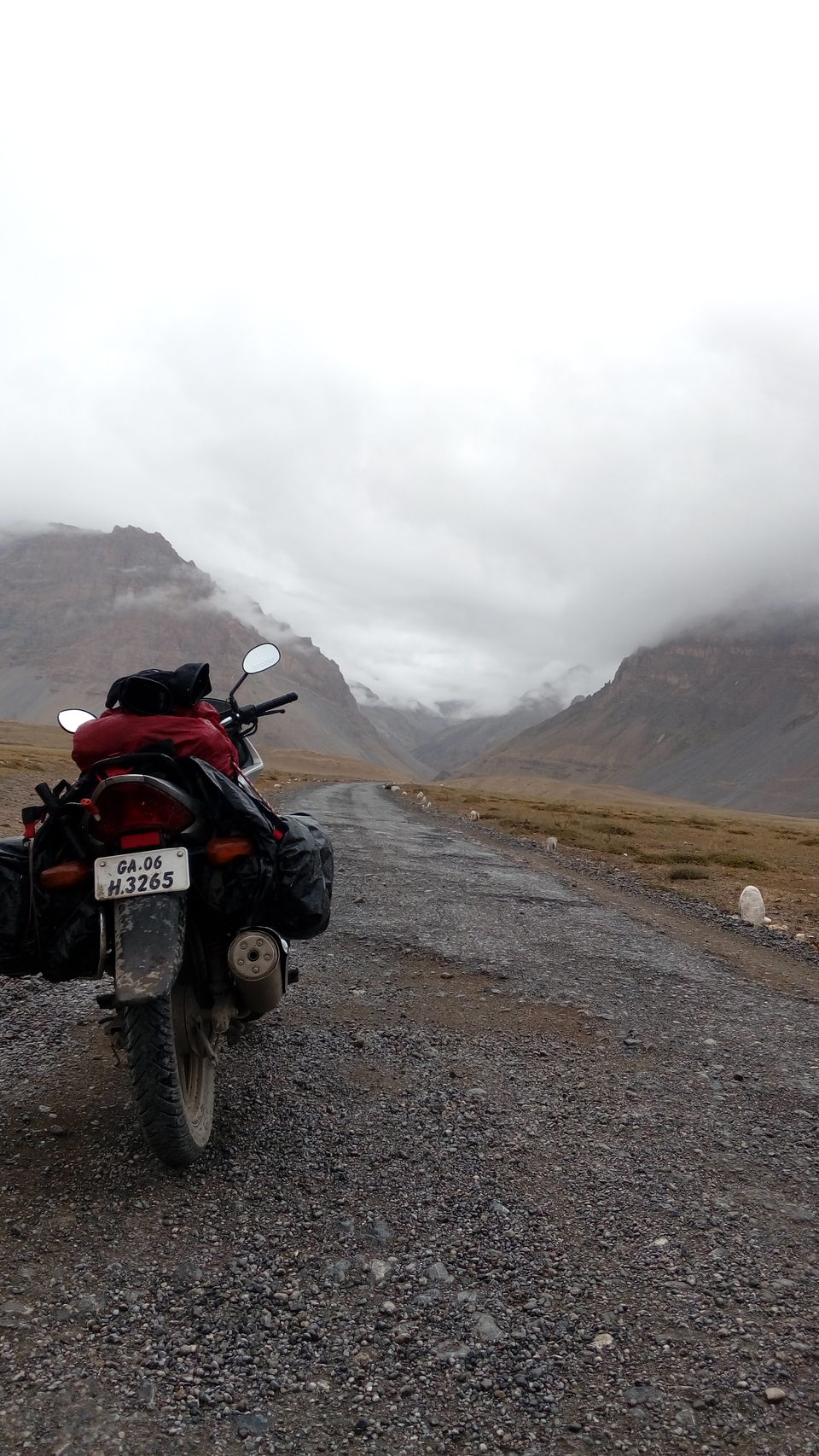 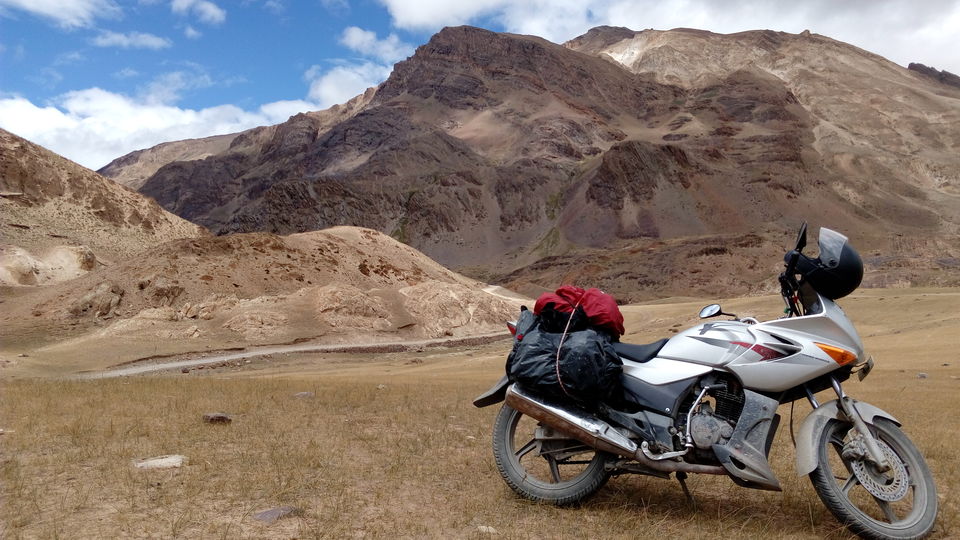 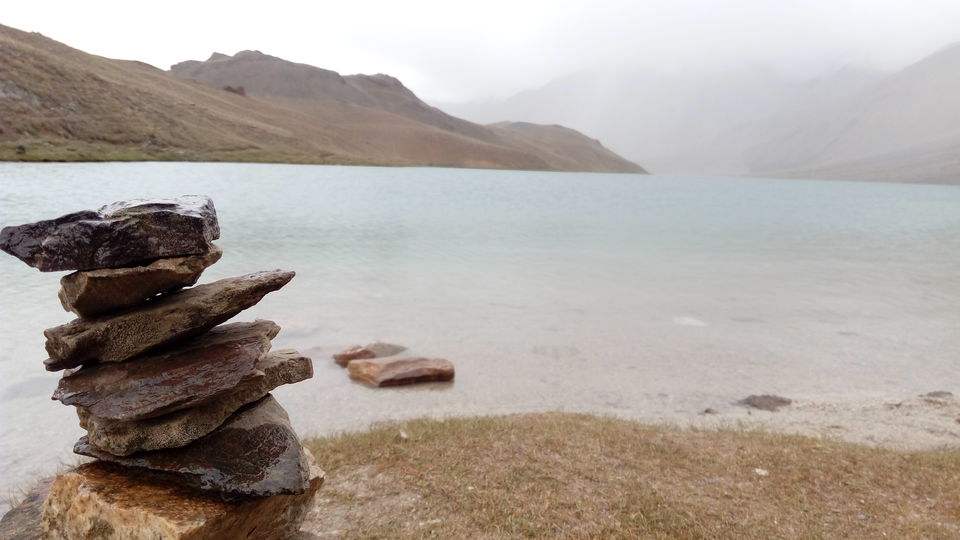 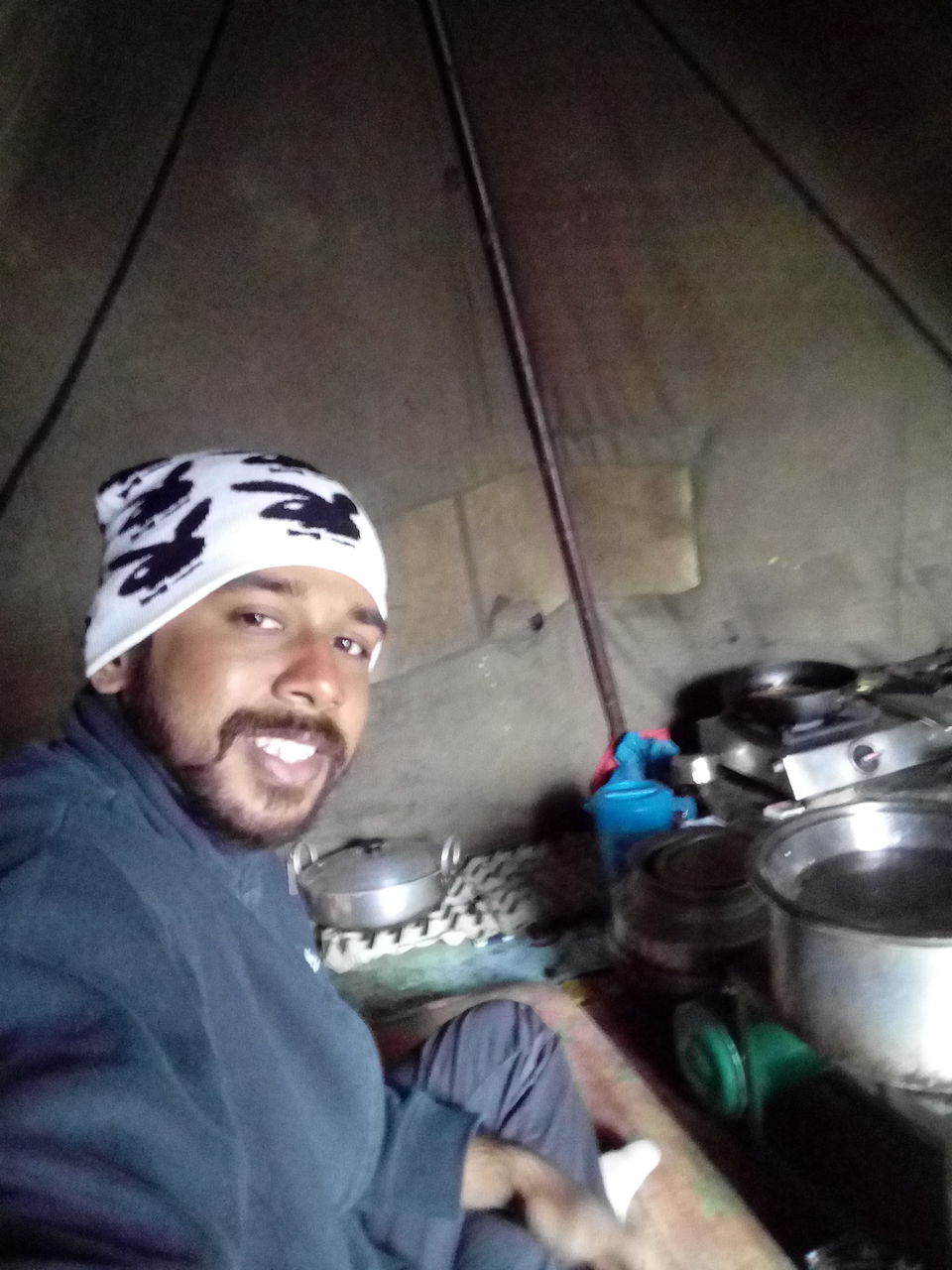 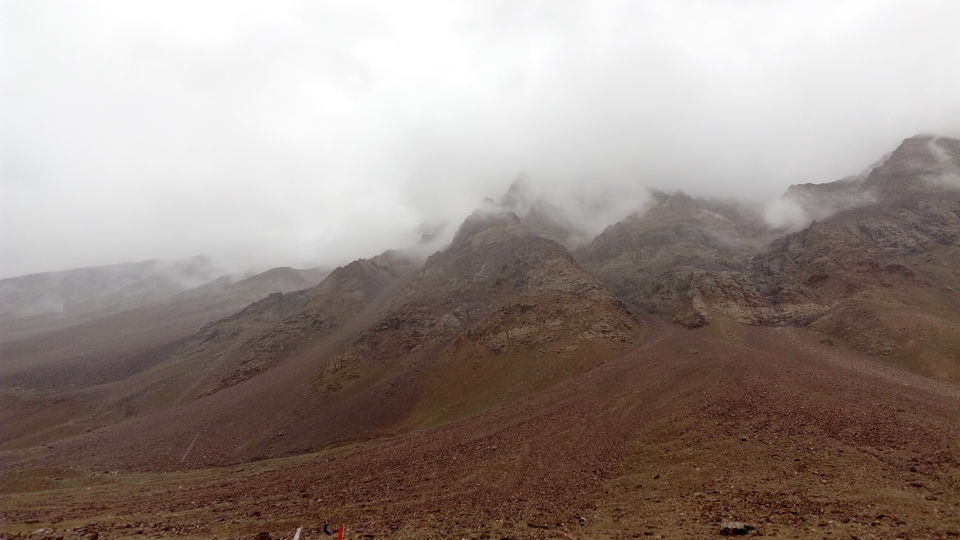 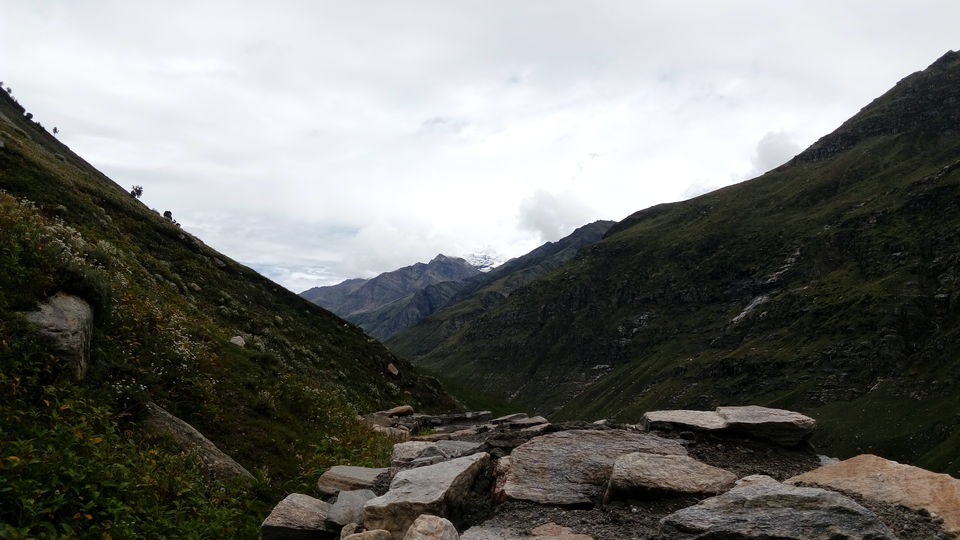 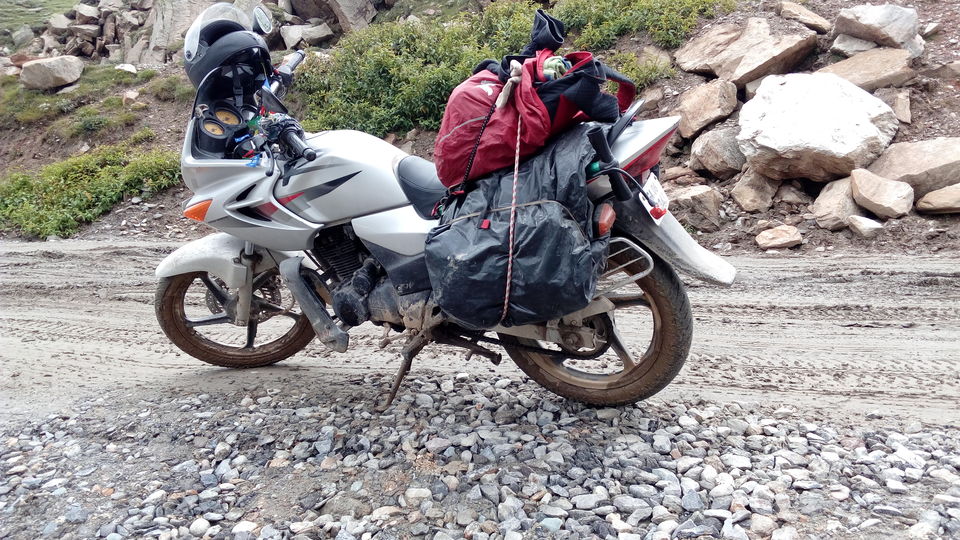 Special mention -the Udaan team from Mumbai!! Awesome guys, were riding at an hour&amp;#39;s distance from m 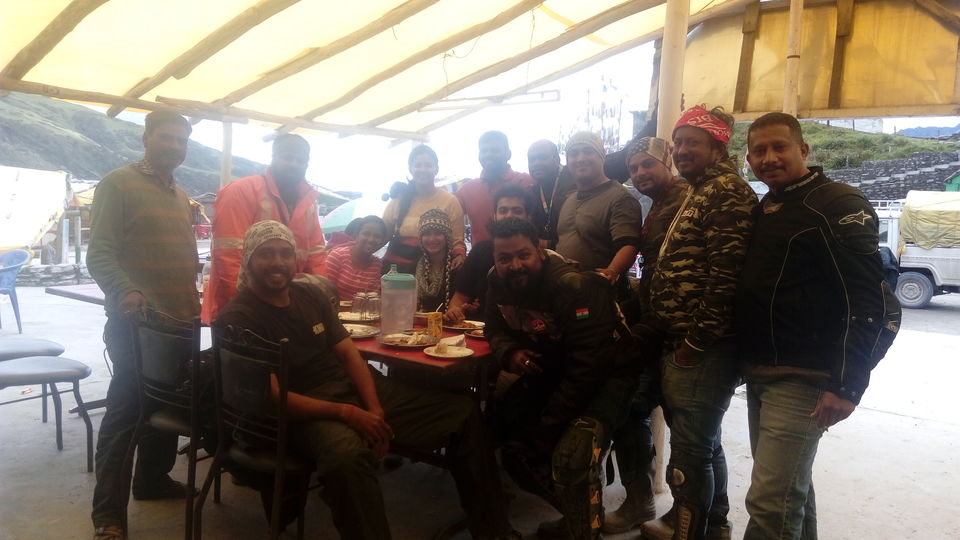 The journey was planned along with resting points, fueling points, ATM points but not with definite halt points for the night. Even the highway from Delhi to Chandigarh Shimla bypass was scary. That was my confidence level. The 1st day of ride for 430 kms was itself a big achievement along with rains right from Himalayan expressway entry till Narkhanda.

At a point while riding from Chandigarh to Shimla where road construction had begun and with rains making the road more gruesome, I experienced hell on bike. The speed dropped down to 20- 30 kmph and point of destination looked more far than ever.

The sun goes down quickly in the mountains was just a saying till now. At 5 p.m. clouds started fogging my path. Visibility was just a meter. Sharp turns were to be managed like a warrior in a war. Trucks had stopped my path. Trucks to load all the apples from Himachal to rest of India. Narkhanda the destination though was just a halt point for the night but was heaven in disguise for me. I walked through cow dung. My shoes were filled with rain water and my baggage was fully wet. I had to reset my clothes from one bag to other with extra polythene to protect them from rains the next day. Hot water in the bathroom was a big relief. One Diamox and some hot water. I crashed on the bed!!!!

The view I woke up boosted the needed confidence to start my day. Scheduled time pf departure shifted from 7 am to 8.30 am with time being wasted to mount the bag on my bike. How could I if I did not know how to mount it? Refuel and the journey begun.

Initial itinerary suggested a halt at Chitkul. So did the roads decided my path? Clear cut roads with a few potholes and sunshine on my face. To myself I thought the worst is over.

No it was not. After the Sutlej view the gruesome cliff road begun the adventure. A small rivulet on the road had turned itself to a fully flowing river. People were stuck at a point with no one to risk their cars till things would be settled. The mad Pranit woke up and took the long shot. 1st 2nd 3rd gear and shoes full with river muddy water. The 1st crossing was done with a smile on my face.

Hilly terrain, neatly cut mountains, pebbles on the road and muddy paths for kilometers at a stretch. The junction to cross over to chitkul or move to Kalpa was seen. Rain did not stop and so were the landslides. 2 pm and it already looked dusky. Some bikers advised on against Chitkul due to muddy terrain and landslides.

Standing at the junction the only thought that crossed me was “Nope!!” Sometimes you get that gut feeling with no road maps, no one to take your decision and you just go with the flow. Down the river side I rode till I entered Reckong Peo. Another day covered with a ton of experiences, some familiar faces of riders, a hot cup of tea, mutton gravy and sukhi roti!!

The best part of riding solo is you get to make your own decisions. There were two parallel routes towards Kaza. One with a diversion for Mud valley and the other which was a muddy trail to Hikkim Komic. The Harley guy and I parted ways. The hotel owner asked if I wanted to see the Monastery. My answer was: “Not man made, but show me something which nature has drawn on its canvas!! “

A diversion on the way towards Dhankar was the best decision till now. Those 3 hours were the best view of the Himalayan range. Every snow covered peak was visible. Panorama was in use by me for every shot I took. Extravagant, marvelous and what struck me was; How can someone create something soo beautiful and keep it hidden from rest of the world.

Covering Dhankar was easy but the ride towards Mud was dangerous, tiring, point of return feeling and worth it. A valley which I shall cherish for the rest of my life. I could hear Poo from Kung fu panda whispering to me: “You have attained Inner peace”. A small village of 30 headcount. All you want to do is sit and stare at that green valley. Breathe and live life in that moment. Let go off all your fears and be yourself. I did not want to leave Mud but Kaza was waiting. The ride to Kaza was lazy. Mountains and mountains, brown, white, green, black, just mountains!!!!

Kaza at the German bakery I met the Harley guy again. Coffee, banana cake and a sense of achievement to cover more than 50% of the track. We exchanged cards and were back to our rest houses!!

What are the odds that a hitchhiker would ask a lift from you? Travelling solo and travelling by just taking lifts from other people. Meet Urvashi, Punjabi, daring, funny, talkative and a solo traveler!!

Since I had no luggage on the bike I became the rider and she the pillion for the day. Hikkim: the world’s highest post office, Komic, Kibber and Kei were covered . The journey mattered. The roads were the same; muddy, slippery, pebbled, graveled!! But the view was much better. I would not say much about the view. You need to travel here to get it for you!! While back to Kaza from this small detour I was getting more comfortable introducing myself to rider groups and solo riders.

I met these guys Hari and Gauresh; introduced myself. They said they were from Goa. There they were, 2 more bikes with GA registration plate.

Full on mother tongue Konkani was on at kaza, discussing our journey till now. I handed over my empty jerry cans for them to refuel as they were moving towards Keylong and my route was for Chandrataal. Not at Delhi, not at Gurgaon not at Noida but random Goans at Kaza: Imagine that!!!!!

Goodbye Goans, next stop Chandrataal!! The most difficult road I had to cross. The problem was not the gravel and falling stones. The problem was downhill from Kaza and the falling stones. Kumzum pass was an attraction for tourists. Chandrataal for a beach boy was not an attraction, the camps definitely were! I met Pema the caretaker and helped him with his other guests. Literally prepared bread omelet, chai and Maggi for around 20 people in exchange for free food, the best tent and a proper bedding!! Pema stays at Chandrataal for 4 months without a phone and no connectivity with family. He said “I do it for survival and for my family”

At night the winds stopped and the sky was clear. Full moon, camp fire, unknown people ad a million of stories. It was worth the downhill heaven!!

19th August 2016: The choice is yours and so are the repercussions!!

Water crossings from Chandrataal till manali were not at all difficult. Just around 8 of them. All you were riding in were wet shoes, a light breeze on them and mud filled terrain. One could just feel a tinge of cold on their legs. The path let you make your decision. The mud, mud and water, gravel or the flowing water. Your choice to ride through !!

Just before reaching my final descent towards Manali came the worst of my nightmare. 2 kilometers of ankle deep mud uphill. And my clutch plate became weak. 1st 2nd and no other gear. 6000 rpm in 2nd gear and no forward movement. Ankle deep mud and stuck cars and bikes. Hell had revamped. Some localities advised me to stop take rest, let the bike cool and 2 hours down the line, 3 guys were helping me out to push the bike , mud on me and my bike I was up next to Rohtang pass.

Tourists clicking selfies near the board and I did not stop. Downhill was Manali and the roads were cream. The bike was back in shape and so was my confidence.

At Manali a mechanic suggested that the clutch plates were fine. It was just the clutch cable that was stuck. The night was at an Israeli café with some localities!

The day started off great with a downhill ride but once I reached Bhuntar the rains stormed back in action. By now I was ok with every weather condition. But the bike was not. The clutch plates heated up and I was back to 20-30 kmph on clear roads. Target to reach Chandigarh was 4 pm and it was already 5 pm at Swarghat!! Worst decision not to change the clutch plates. The hunt for an ATM machine, a mechanic and clutch plates!! I was being tested for my patience!! Top of swarghat I asked a mechanic who advised me about the downhill from there on to Punjab.

60 kilometers short of Chandigarh and I met a mechanic! Change of oil, front disc pads and clutch plate. I was all set at 7 pm and the rest was just 350 kilometers of expressway!! As smooth as cream and I was at Noida by 1.30 am 21st August 2016!!! A total of 1833 kilometers