Biryani has seen way more history than we have. Shrouded as it is in mystery and a melange of mouth-watering spices, several legends abound the delectable spiced rice and meat mixture that came to be in India.

It might have been spotted when the widely feared Turk-Mongol conqueror, Timur arrived with his army to the borders of India in 1398. The dish was part of war diet for his army. An earthen pot was filled with rice, spices and whatever meat was available and buried in a hot pit to be dug up and eaten by the warriors.

It held considerable sway in the Mughal era and its dining rooms. Mughal emperors known for their lavish lifestyles and epicurean tastes loved a good biryani with its tender pieces of meat and fragrant rice.

Another legend puts the dish back to 2 A.D. in the southern Malabar coast of India. Records of Oon Soru, a spiced rice and meat mixture were found in Tamil literature.

Yet another narrative attributes its invention to Mumtaz Mahal, Shah Jahan’s beautiful queen, who found their soldiers looking undernourished and ordered the chefs to combine both rice and meat for their nourishment.

Biryani’s fan following since hasn’t diminished with delectable variations of the same dish modified to suit regional palates. Try proclaiming your region’s biryani as superior and you’ll watch tensions rising and full blown wars escalating. Clearly, biryani is a dish which plays heavily with people’s emotions. Here’s a look at the different varieties of biryani available throughout India.

Passed down from the kitchens of Hyderabad’s Nizams, this much acclaimed biryani is fiery and comes in two varieties – kacchi (raw) and pakki (cooked). The kachhi biryani involves marinating the meat overnight in spices and curd and then layering it with rice next, to be cooked at a particular temperature. The pakki biryani involves the meat being marinated for a shorter time and cooked separately from the rice. The two elements are then layered together before being cooked by the dum method. 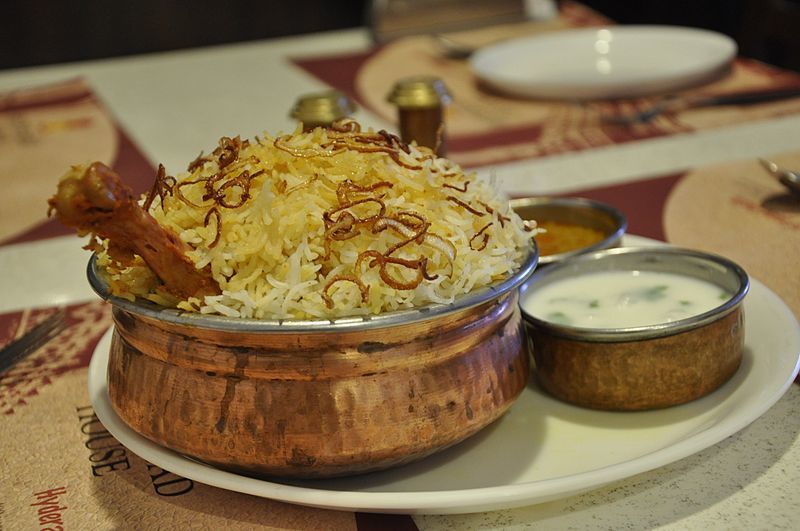 The dum method uses earthen pots with the biryani layered within and cooked on a flame with the top portion sealed off with dough. Hyderabadi biryani with its fragrant saffron-flavoured rice and piquant meat is best paired with an equally spicy saalan and raita as accompaniments.

The Calcutta biryani with all its drool worthy, subtle flavours has a melancholic past. When Awadh’s last Nawab Wajid Ali Shah was banished, the connoisseur of food and expensive tastes brought along his entourage of cooks. With a considerably diminished amount of income, the chefs struggled to make do with what they had and introduced the humble spud to replace expensive meat in the biryani and it has stayed there ever since.

The star of the dish now is the potato, cooked beautifully with a crispy golden jacket that is pierced to give in to warm mushy potatoes goodness. There’s fluffy white basmati rice delicately flavoured with strands of saffron and rose water with chicken or mutton. You’ll find a glistening egg hidden in the middle. 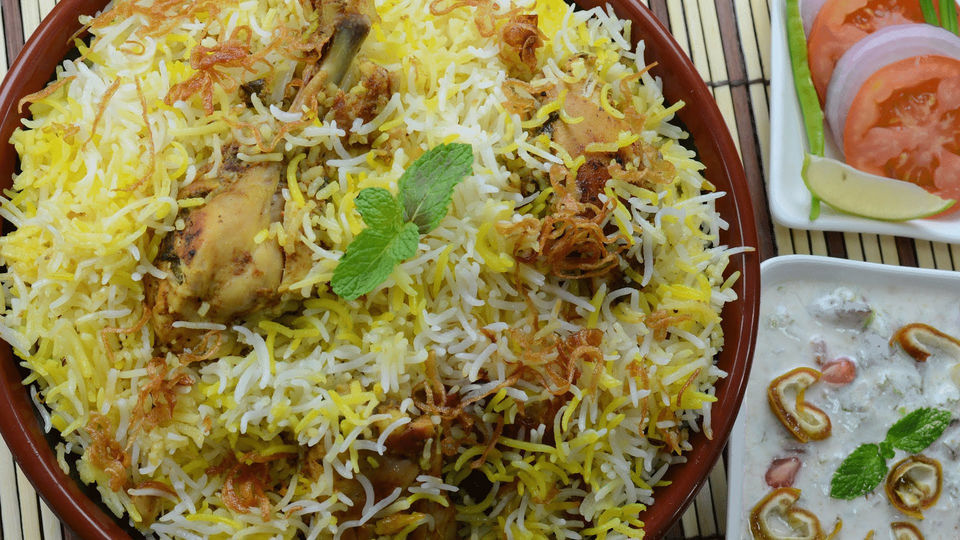 The Lucknowi biryani is a legacy of the Awadhi style of biryani with mild spices. A stock prepared from meat is stewed in its juices with spices to make this tender and moist biryani. Meat is cooked partially and infused with spices like star anise and cinnamon and then layered with rice in the dum pukht style.

Dindigul Thalapakatti biryani has a fan following at par with that of ‘Thalaiva’. And there’s good reason.

Only meat from grass-fed Kannivadi goats are used to make proper authentic Dindigul biryani. The dish is set apart from its peers because the meat is cut into tiny cubes instead of large chunks. Jeera samba rice is doused in curd and lemon for that tangy aftertaste and then mixed liberally with pepper leaves to set your taste buds ablaze. Luckily, there’s onion raita you can ladle on to combat the fieriness of the biryani. There’s also eggplant gravy for the taking.

This sweet and savoury biryani belongs to the Malabar region, mainly Kerala. However, there are many delicious variations of biryani hailing from this region.

The Thalassery biryani is serious business. Basmati rice is passed over for their indigenous variety of rice called ‘Khyma’ or ‘Jeerakasala’. What follows is an extravagance of succulent chicken wings, crispy fried onions, sautéed cashews, raisins, Malabar spices and fennel seeds. The meat with gravy is mixed with the rice only when it is served. 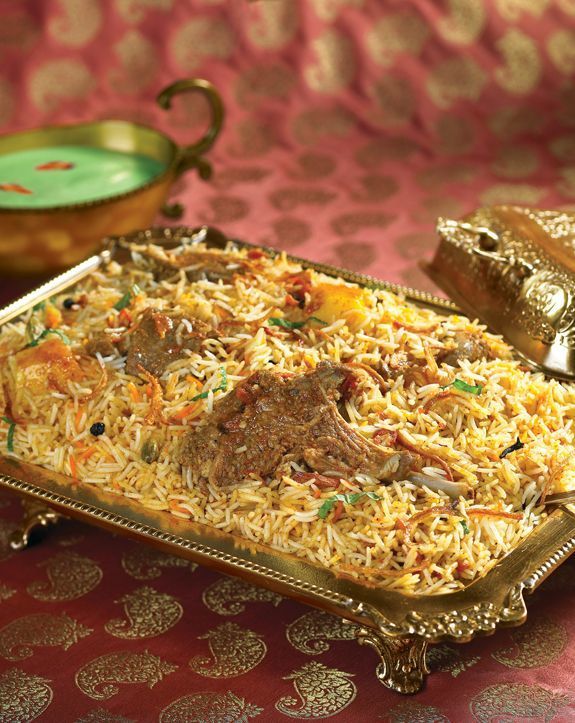 The Memoni biryani is perfect for people who like their food high on the hot-o-meter. This extremely spicy biryani is a speciality made by the Memons of the Gujarat-Sindh region. Juicy lamb chunks, crisped onions and potatoes with yogurt are added to this biryani. This biryani doesn’t need food colouring to make it look tempting, the vegetables, meat and rice do the job. 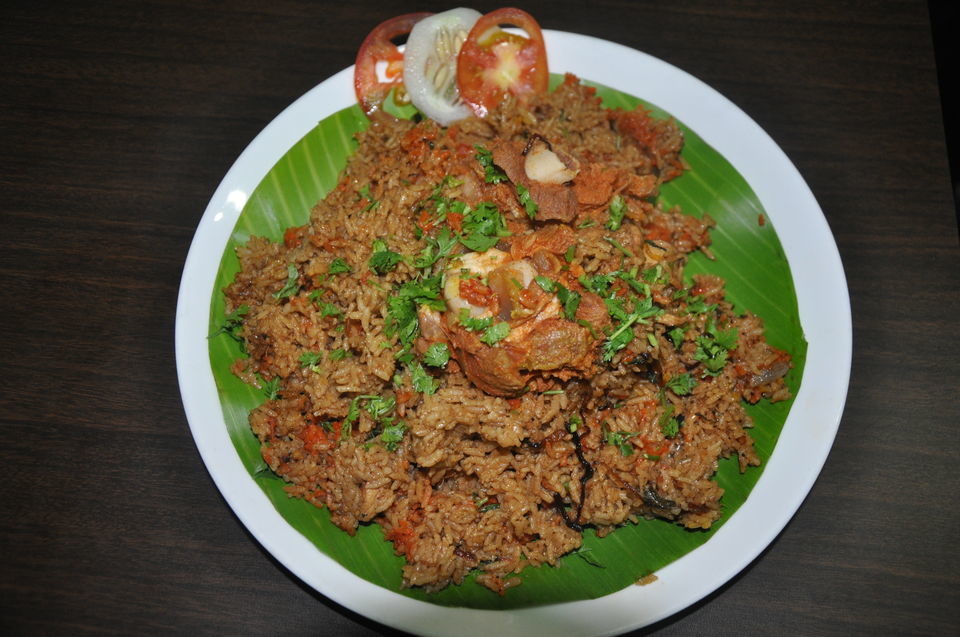 Make sure you get yourself a plate of Ambur biryani when you go to Tamil Nadu just to taste its unique flavours. What sets it apart from other biryanis is the way its meat is soaked in curd and then suffused with the flavours of coriander and mint. The meat is then added to the cooked squat seeraga samba rice along with helpings of other spices. It also has a higher meat-to-rice ratio which is a plus for meat lovers. Pair it with ennai kathrikai or brinjal curry to experience an explosion of flavours in your mouth. 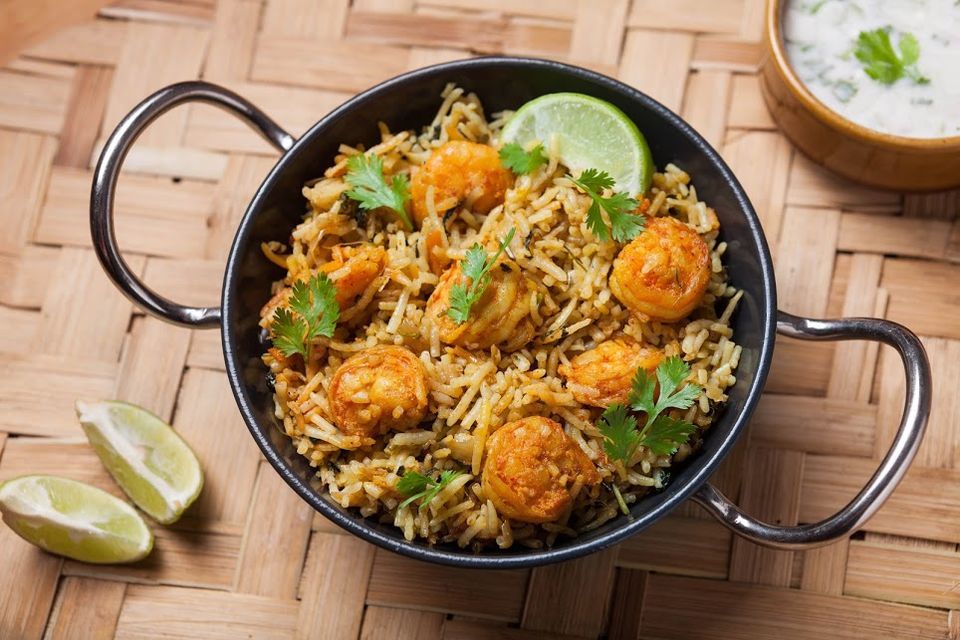 This variation of a spicy Mangalore biryani is a specialty belonging to the Byari Muslim community in coastal south Kannada in Karnataka. The name of the biryani comes from the word ‘byara’ or trade. Created by traders and merchants, the biryani has a generous sprinkling of chillies and coconut. The rice especially has a distinct strong flavour, soaked as it is overnight in ghee and spices. The versatile dish incorporates meat (chicken or mutton) as well as available seafood.

You can devour a plate of this biryani without guilt because Tahari, unlike other biryanis, is made without meat. The meat is substituted with veggies, lots of them. Carrots and potatoes are commonly used along with a variety of fragrant spices. 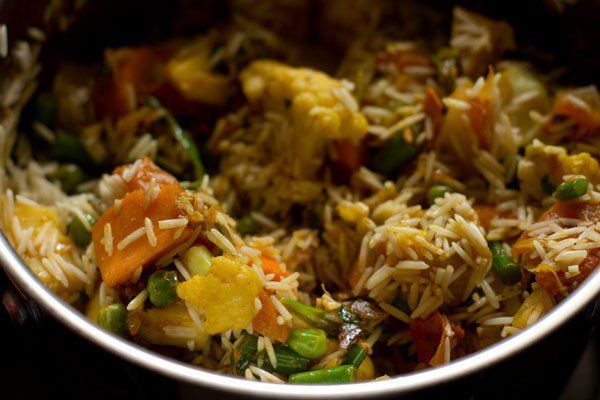 According to legend, the dish was birthed in Mysore when Tipu Sultan hired vegetarian Hindus as his bookkeepers. A vegetarian alternative to biryani was devised for them and continues to enthral vegetarians even today. The dish is a popular street food in Kashmir. 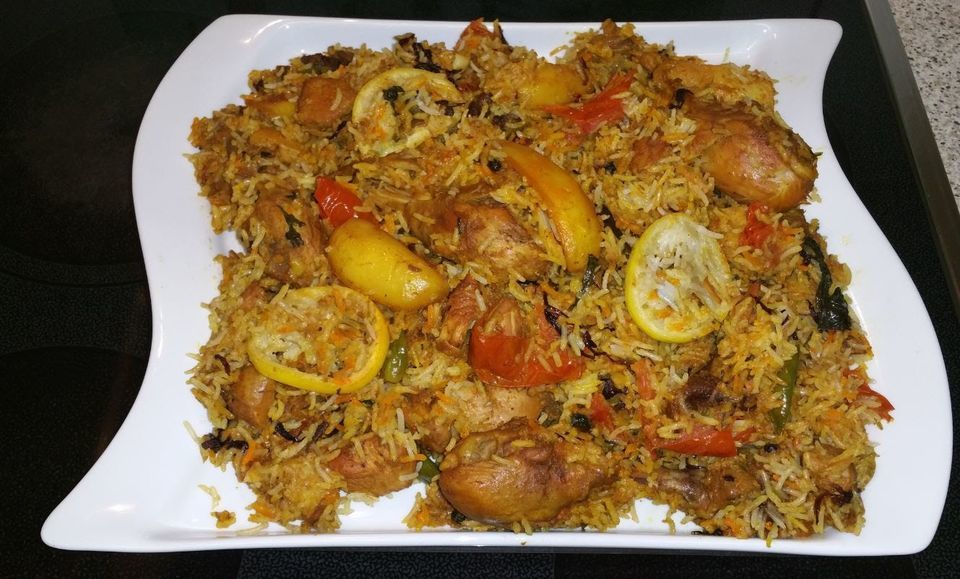 Sindhi Biryani with its sharp and bold flavours came from the Sindh province which now lies in Pakistan. The Sindhi biryani will make you gorge in sinful gluttony but you'll have to reach for a tissue owing to the generous use of finely slit green chillis.. Roasted nuts and spices, mint, coriander, onions and dried fruits are added to make this rich flavorful biryani. A distinctive characteristic of this biryani is the addition of plums and potatoes for that nutty fragrance. Sour curd is added during the layering process to give the biryani a little tang. 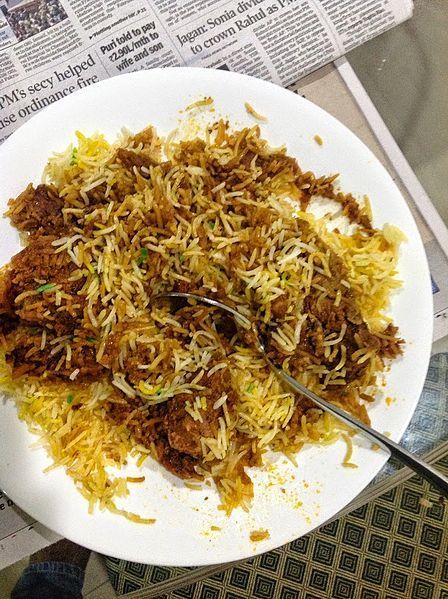 Mumbaikars’ zest for life is evident in their biryani as well. Tangy and sweet, the Bombay biryani is a riot of flavours with every spoonful. Other than chicken or mutton what you’ll always find amidst the heap of rice is spicy fried potatoes. There’s a tinge of sweetness to the dish lent by the addition of dried plums and kewra water (screw pine). It might win your heart just like the city does.

If you’ve ever been to a wedding in Bhatkal, a coastal town in Karnataka, chances are you’ve been served a steaming plate of the Bhatkali biryani. The sumptuous dish can be traced back to Persian traders. The meat in Bhatkali biryani is cooked in an onion and green chilli masala and layered with aromatic rice. Some more chillies, spices and curry leaves are added to the dish to make it flavourful. The result is a delicious meat dish paired with white rice streaked with orange with that pungent aftertaste of onions and garlic.

You best put on your stretchable pants and get started on this gastronomic adventure. Gotta catch 'em all, right?

Got something to say? Write about it here.

Browse through our travel videos here.