All Hail the Villains: Temples Dedicated to Villains from Indian Mythology

India is a fascinating land that is marked with courageous acts of heroes from mythology. These stories of valour make their way into everyday chatter, politics and inevitably, religion. However, we don't just pray to heroes. Believe it or not, India has temples dedicated to some of the most iconic villains in Hindu Mythology. Read on to find out if your favourite makes the list!

What better way to begin this list than with the mastermind of Mahabharata, Shakuni. He was a shrewd illusionist who was responsible for instigating the great Indian war of Kurukshetra between the Pandavas and Kauravas. Though he is usually considered a villain, a community in Kerala recognised the Sattvic (moral or positive) elements in his demeanour. He was a devoted brother, who wished nothing but the best for his sister Gandhari. Thus, they decided to construct a temple to honour him at Pavithreswaram.

Here a throne is present, which is believed to have been used by Shakuni. No kind of puja or tantric rituals are performed here, yet devotees make offerings to the temple like tender coconut, silk, palm wine (toddy), etc. The temple is maintained by the Kuravar community of the region.

People believe that during the Mahabharata battle, Shakuni travelled here with the Kauravas and the army divided the weapons amongst themselves. The local Kuravars think that Shakuni returned to Pavithreswaram after the battle and attained Moksha with the blessings of Lord Shiva. Near the Shakuni Temple is a temple dedicated to his ally and favourite Kaurava prince. Any guesses who?

Shakuni’s constant companion and apprentice Duryodhana takes the second spot in this listicle. Malanada temple in Poruvazhy, Kollam is dedicated to Duryodhana and is located near the Shakuni Temple.

Duryodhana was the eldest of the Kaurava brothers and the main antagonist of the Mahabharata. The temple does not have an idol but only a raised platform. The devotees submit themselves to the divine power through a mental process called Sankalpam. This is not the only temple dedicated to Duryodhana in India, though it is definitely a more celebrated one.

The most common offering to the deity is toddy apart from betel nut, rooster, arrack and red cloth. An annual fest called Malakkuda is celebrated here during the second half of March with zest and is a splendid event. The funny thing is that the land tax of this property still levies in the name of ‘Duryodhanan’. Talk about keeping someone alive in memories! 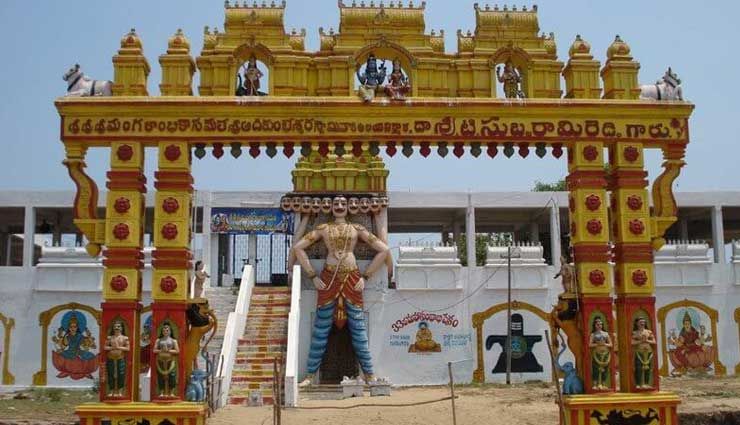 Up next is the warlord intellectual, Ravana from the epic Ramayana. With him being one of the most defamed mythological characters, a temple dedicated to him comes as quite a surprise. And it’s not just one! India has no less than seven temples where Ravana is worshipped.

According to mythology, Ravana was the grandson of the creator of the universe, Brahma, son of the sage Vishrava and younger brother of Kubera, the deity of wealth. He was an unmatched scholar and possessed in-depth knowledge and understanding of the Vedas. His devotion towards Lord Shiva led him into establishing Shiva temples across various locations in India as well as in Sri Lanka.

The temple in Kakinada, Andhra Pradesh is believed to be the birth place of Ravana. Thus, it holds a sacred place in the minds of his followers. Its close proximity to the sea and the surreal surroundings make this a place worth keeping on your bucket list when visiting Andhra Pradesh. Dave Brahmins, who claim to be the descendants of Ravana, consider him the king of the three worlds and a superhuman. Other temples dedicated to Ravana are Bisrakh in Delhi/NCR, Dashanan in Kanpur, one in Rajashtan, Ravangram and Ravan Rundi in Madhya Pradesh and Baidyanath in Himachal Pradesh.

Karna, the unfortunate anti-hero from Mahabharata, is worshipped in Deora, Uttarkashi. The most righteous and charitable of the Pandava siblings, Karna fought from the side of Kauravas, thus making him a villain of sorts.

It is believed that Karna meditated at this spot to please the Sun God. Hence, the place is known as Karnaprayag. Another legend has it that this is the place where Lord Krishna buried Karna after his death in the battle of Kurukshetra at the hands of Arjun.

Karna’s good deeds and merits were so strong that it is believed that Dharma-Devi, the goddess of righteousness, was herself protecting Karna during the epic battle. In order to let a wounded Karna die in peace, Lord Krishna had to disguise as a sage and ask Karna for all his merits as dakshina. Karna obliged him and was then killed by Arjun with a final attack.

The temple is rectangular in shape with wooden architecture, making it different from conventional Hindu temples. Today, people throw coins at the temple walls when their wishes are fulfilled as homage to repay his kindness.

Gandhari, the mother of Kauravas, is seen as a negative character due to her strong stance against the Pandavas in Mahabharata. However, very few can argue with her devotion for her husband and children.

Her decision to remain blindfolded for the rest of her life after marriage was indicative of her strong character and loyalty for her husband. This devotion and loyalty impressed a community in Mysore, who decided to epitomise her image. Considering her vital support towards her blind husband and her sons, the Kauravas, a temple was built in 2008 in her remembrance with an estimated cost of 2.5 crores.

Bhishma Pitamaha was a character that was bound by his vow and eventually had to fight for the Kauravas. Not exactly a villain, yet he was the chief of their army. A temple in Prayagraj is dedicated to him and shows him sleeping on the bed of arrows.

It is located in Daraganj near a famous Nagvasuki temple. While there is another Bhishma temple in Kurukshetra, the one in Prayagraj is much more detailed and elaborate. Bhishma was definitely a man of his words and an intellectual person, who sacrificed everything in the line of duty. One could learn the importance of values and virtues from this anti-hero.

The existence of these temples is proof that everybody has a good side to them. All it takes is someone to notice it and shed light on it. It's time to pack your bags and learn a thing or two from the fallen. All hail the villains!

Have you been to any of these temples? Tell us all about it here on Tripoto!