Kasol - The land of hippies 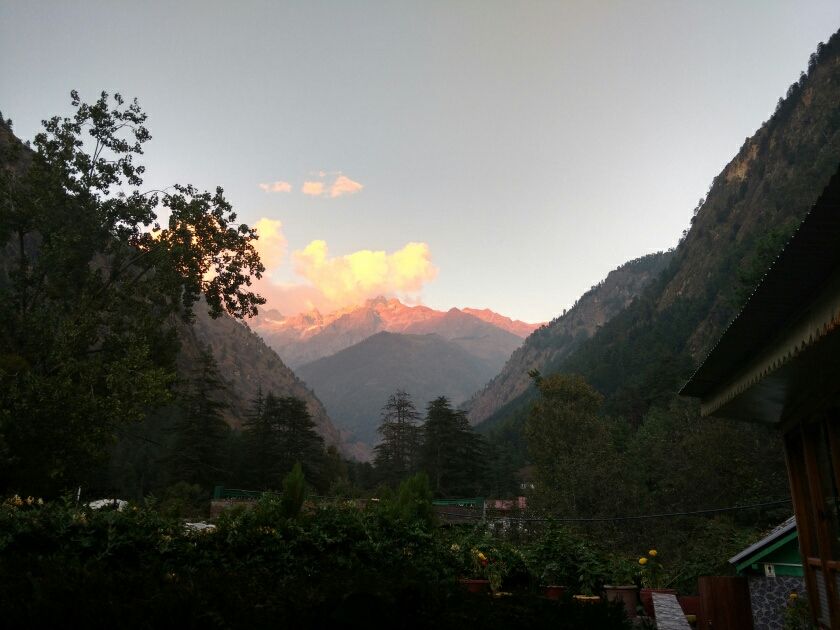 A small village nestled into the lap of Parvati valley, surrounded by the mighty Himalayas, guarded by the river Parvati and blessed by Lord Shiva. Known by various names like, land of hippies, trekkers' paradise, hash capital of India or simply Kasol!

A place that falls on the way to the famous holy shrine, Manikaran, an Indian village where there are more Israelis than Indians, a place where smoking up in a cafe is legal but smoking on the road attracts a fine of 500 bucks. Kasol is a place full of mysteries. Looking at the billboards in Hebrew, the first thought that crossed my mind was that, in a tiny Himalayan village, who understands this language. But as I explored this hamlet, I discovered the answer to my question.

In this blog, I’ll contrast between my two different and equally beautiful experiences of this land of hippies. I took my first trip to Kasol in the month of January when the winters were at their peak where I had to literally wear 4 layers of warm clothes since the temperature had dropped to -12 degree centigrade and even my smartphone had lost its smartness and had stopped working for two days. The roads were empty, the cafes weren’t crowded, there was no waiting for getting a table in the cafes, most of the shops and cafes were closed. The place was so calm that when sitting in silence, all we could hear was the sound of flowing water of Parvati river.

My second trip happened in the month of October. This was altogether a different face of this beautiful valley. The weather was sunny and roads, shops and cafes were all crowded. Even the famous German Bakery was open this time.

Loaded with lots of packets of wafers, biscuits, and what not, our road trip to Kasol started at 4:00 pm on a sunny afternoon from Rewari. We decided to take NH44 which passes through Rohtak, Panipat, Chandigarh and enters the land of Gods, Himachal Pradesh. As we all had met after almost a year, there was a lot of catching up to do. We didn’t realise that the sun had set long back and our stomachs were shrinking of hunger. So finally, we decided to take a pit-stop at a food plaza somewhere in Punjab (I don’t remember the name of the place). The best part of being on a highway in Punjab is that you get lip-smacking food and ultra hygienic washrooms in the food plazas. After having dinner, without wasting time we resumed our journey. Taking few chai breaks on the way and driving for whole night on ghats, our bumpy ride to Kasol ended at 6:00 am.

Overconfident about availability of hotel rooms, we marched towards the reception of Hotel Blue Diamond, only to find out that since our check in time was 11 am there were no rooms available at the moment. We were tired as hell and were left with no option but to crash on the sofas in the restaurant. The manager was kind enough to get blankets for us and not charging us for the complementary breakfast which was not a part of our package. Finally, we got rooms at 10:30 am.

We quickly freshened up and set out to our newest discovery, Bhoj Cafe but this cafe was quite disappointing since it didn’t seem to be hygienic and even the food tasted awful. So we proceeded to our tested and trusted cafe, Evergreen. En-route we took a tiny pit-stop at German Bakery and tried their carrot cake and chocolate truffle cake and let me tell you it was the dessert therapy which brought our excitement back. Unlike our previous trip, this time Evergreen had a long waiting for getting a table but we were lucky enough to get our favourite table from our last trip after hopping four different tables and ordering a dish on one table and getting it on another. Even the weirdest of acts give a sense of achievement when the excitement levels are so high.

After a few rounds of food and their signature honey ginger lemon tea & hummus naan, and hopping tables, we decided to check out and start trekking to Jim Morrison Cafe. This cafe is located on a hill and one needs to trek for 15-20 mins to reach here. Unlike our previous trip, the cafe was surrounded with kinnow (orange) trees with oranges hanging on the branches. They serve the best chowmein in Kasol and play movie on large screen every night which makes the atmosphere more trippy. After watching movie, we decided to go back to our hotel. 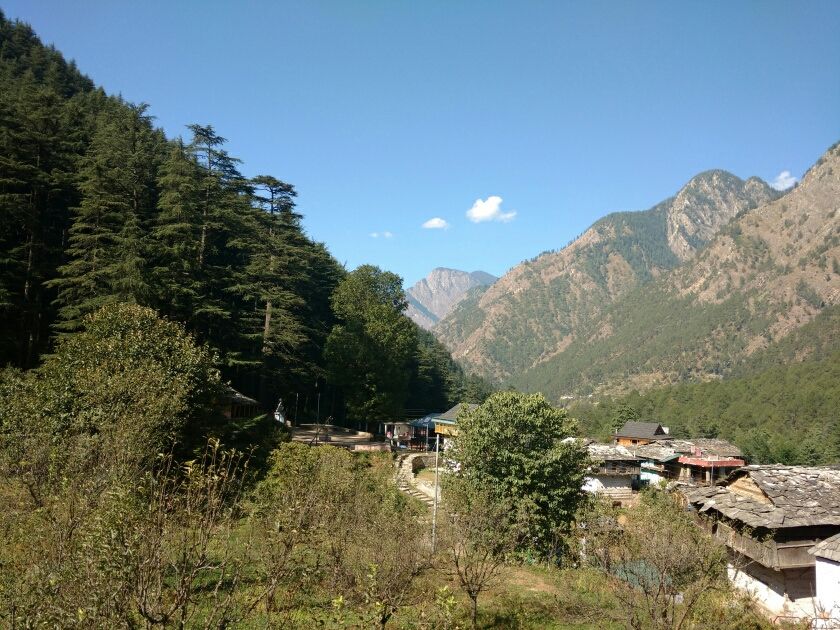 Day 3 started with visit to Manikaran. Manikaran is famous for its natural hot water springs and there is a temple and a gurudwara on the bank of river. There are different beliefs of Hindus and Sikhs about the origin of hot water springs.

After having breakfast at langar in gurudwara, we proceeded to another Himalayan village, Tosh. The ride to Tosh from Manikaran is quite bumpy. Since, there was no motorable road after Barshaini, we parked our car and started walking to Tosh. Barshaini is also the starting point of the famous trek to Kheerganga and Malana village. The place was full of bikers and trekkers. After walking for almost an hour, we reached Tosh.

Now the biggest question was, where to go. So we checked on tripadvisor and found that Olive Garden is one of the best cafes there. The search for olive garden started on a narrow path with cows and bulls as our companions, passing through Jamadagni Temple which is considered to be so sacred that a fine of Rs 3,000/- is slapped if a person touches even a stone near the temple. Finally, we reached Olive Garden Cafe and realised that the amount of energy spent in finding this place was all worth it. The cafe has breathtaking view of the snow clad mountain ranges of Himalayas from its windows and of course serves finger licking food. As the sun was setting, it was time to start walking back to Barshaini as there were no lights en-route and the weather had also become very cold due to snowfall at Rohtang pass that day. After reaching Barshaini we decided to go directly to evergreen cafe. The place was crowded as usual but the manager gave us a table on a condition that we will not hop tables again. But who cares about such conditions when you are with the craziest of friends, and we did what was expected from us. After sitting in evergreen for some time, we headed back to our rooms and crashed after a tiring day. 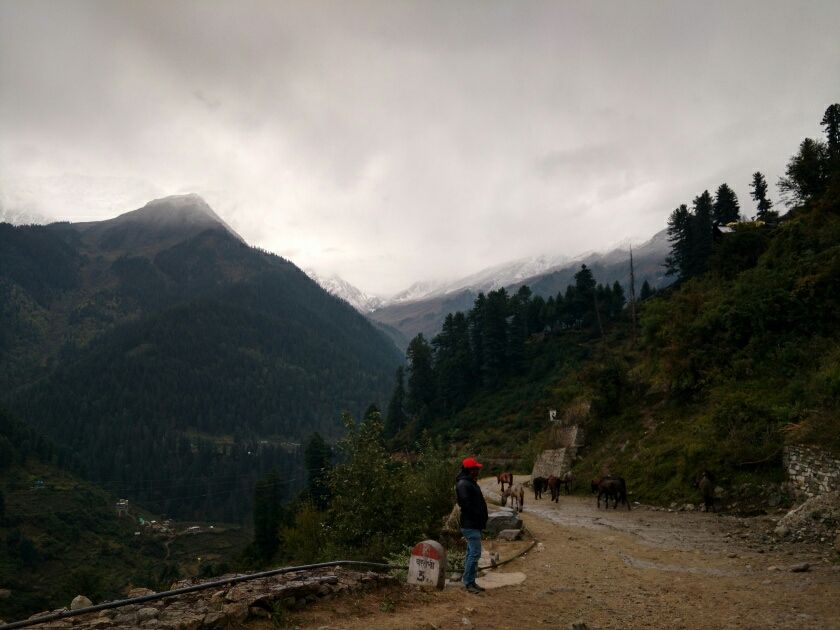 After having breakfast at Little Italy, we started our return journey to Delhi, bidding goodbye to the mighty Himalayas with a heavy heart and unforgettable memories of a crazy trip. The day was tiring but the level of excitement was not supposed to fade away so, at 12:00 midnight, we decided to take a break at the famous dhaba, Amrik Sukhdev at Murthal for dinner. Being a Mumbaikar, I have always found famous places crowded all night long in Mumbai but the crowd at this dhaba was crazy. I had never expected a place closer to Delhi to be so crowded at wee hours in the night. So, we quickly wrapped up our dinner and rushed to the airport as I had to catch flight at 3 am.

Getting down at the airport was the most difficult part emotionally, as we were all going to be scattered again for an indefinite period of time. Bidding each other goodbye and making promises of meeting again, we all headed back to our respective cities.

This travelogue was originally published on my website: nomadicmeteor.wordpress.com