India Travel GuideIndia TripsLets Feel On Top Of The World:

Lets feel on Top of the World: 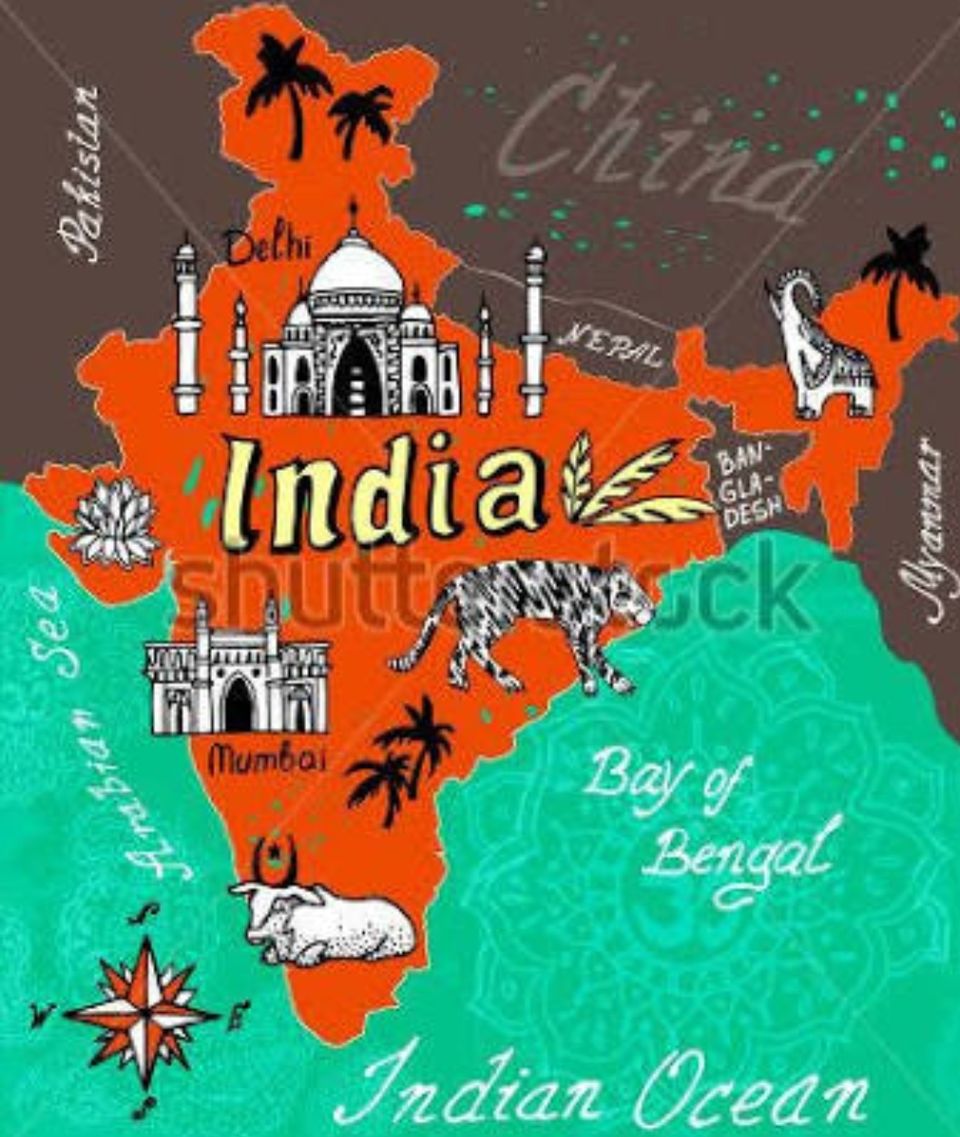 There is something which we all feel when we are at a spot which is itself considered a landmark. Our country houses many remarkable spots which are highest in the world making all of India proud. It feels just magical to get this high and everything looks better. Unfortunately, many people won’t know about it. Let’s get enlightened.

1.Highest Motorable Road in the World:
**Khardung La Paas: It is situated in the Ladakh region of Jammu and Kashmir. This Pass connects Leh city and Nubra valley. The astonishing beauty of the Himalayas will mesmerize you. This road is maintained by BRO- Border Roads Organization. It might be difficult for few people to acclimatize so it’s advised not to spend a long time there. The beauty is unbeatable
**How to Reach: One can hire a taxi or a bike from Leh which is approx. 38 kms from Leh city. The condition of road post 10kms is bad due to the extreme climate conditions. You will find lot of folks who even cycle to reach at the top 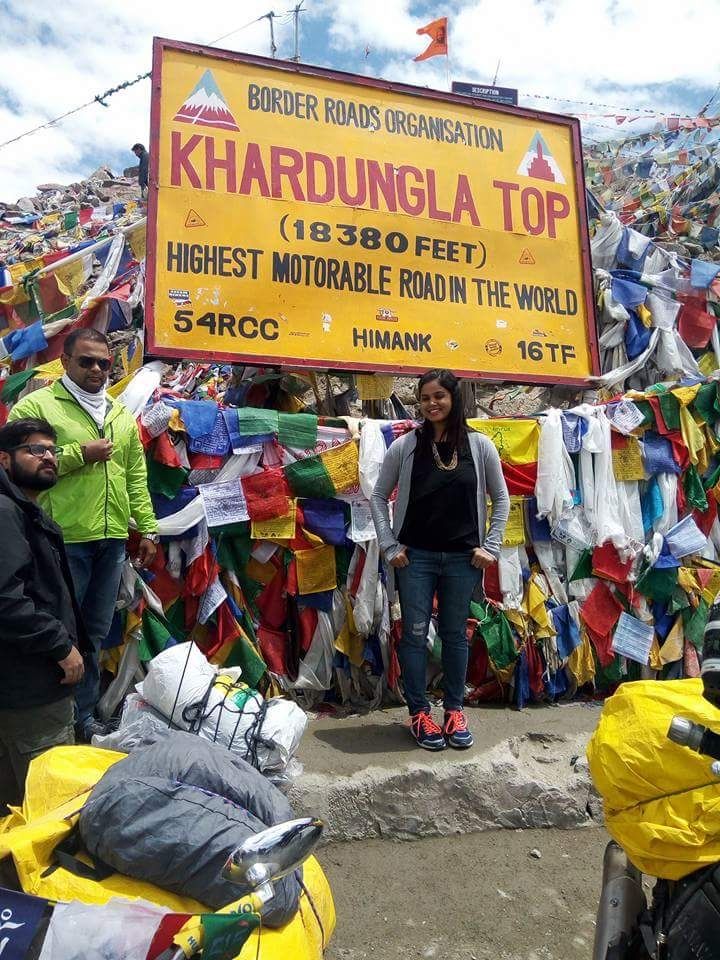 2.Highest Cafeteria in the World:
**Rinchen Cafeteria: it is situated just opposite Khardung la top. This cafeteria gets its name from Col. Chewang Rinchen and is maintained by Indian Army. The café serves Maggi, tea (ginger, lemon, and cinnamon), steaming hot momos and biscuits. The prices are too low considering the remote location of the place. Enjoy these snacks at a height of around 18,380 feet above the sea level
**How to Reach: One can hire a taxi or a bike from Leh which is approx. 38 kms from Leh city. The condition of road post 10kms is bad due to the extreme climate conditions. You will find lot of folks who even cycle to reach at the top 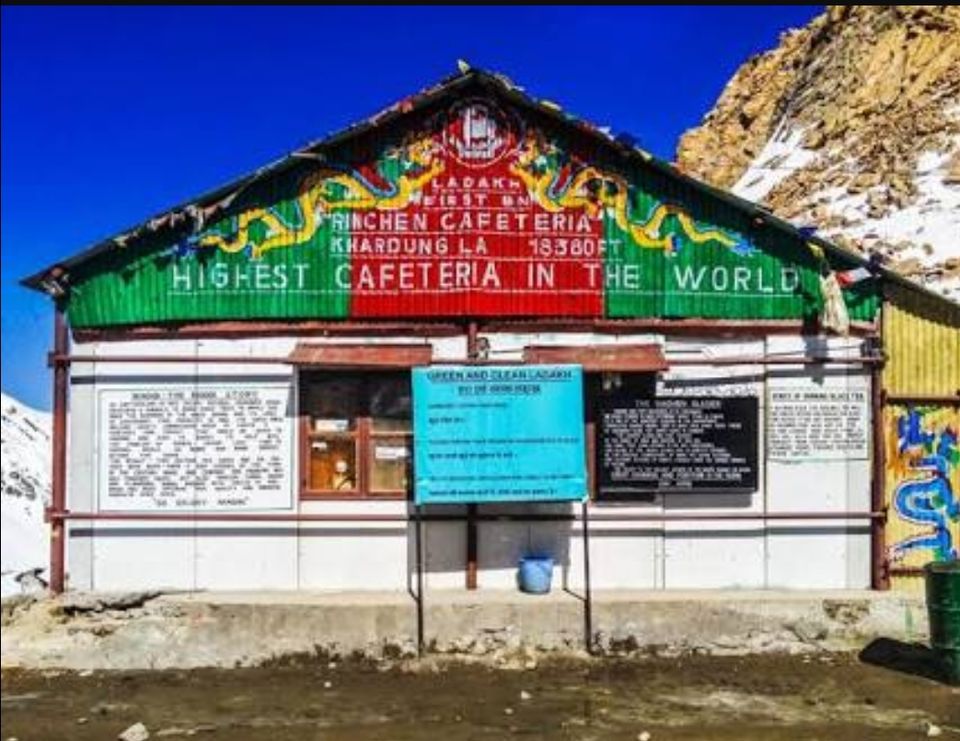 3.Highest Post office in the World:
**Hikkim: It is situated in the Spiti Valley of Himachal Pradesh. This post office has been functioning since 1983 and is run by the postmaster Rinchen Chhering. As explained by locals, mails are sent on foot from Hikkim to Kaza every morning, which is then taken to Reckong Peo by bus, onward to Shimla, then loaded on a train to Kalka, and loaded again on a bus heading to Delhi. From there the mails make their journey towards its destination. Almost half of the year, the post office remains closed because of snowfall and extreme weather conditions. Send a picture postcard to those privileged friends from that “holy” place situated at 15,500 ft
**How to Reach: Either you can hire a taxi from Kaza or take the HRTC bus from Kaza to Hikkim, which runs twice a week on Tuesdays and Saturdays and takes around 1.5 hours to reach Hikkim. This is the most economical way of getting to the village 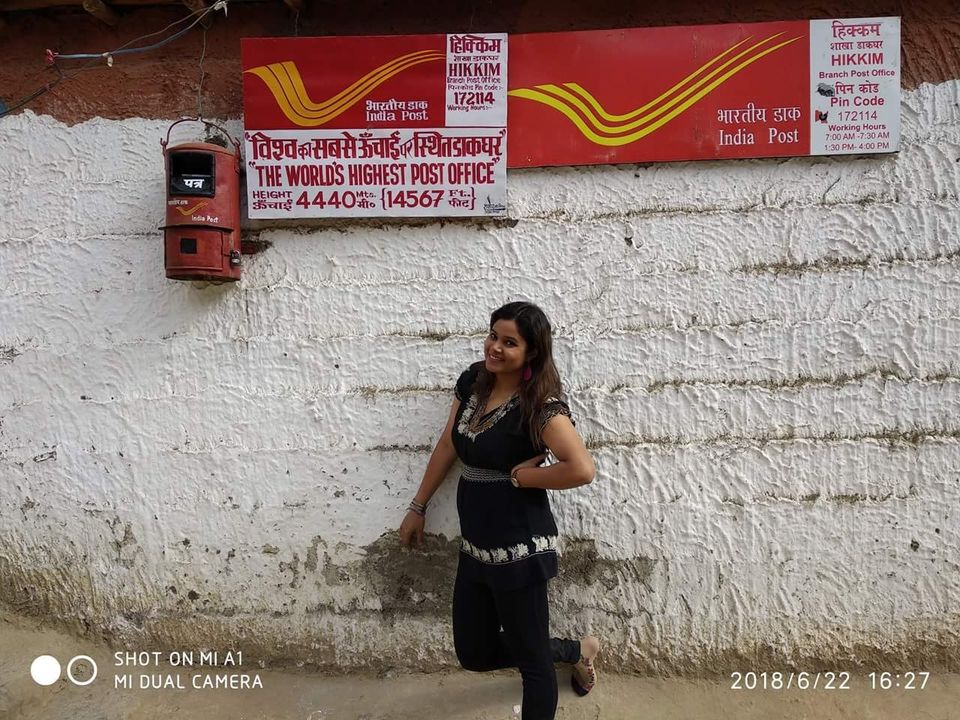 4.Highest Petrol Pump in the World:
**Losar road of Kaza Village: This Indian Oil’s petrol pump is situated on the Losar road of Kaza Village in the Spiti Valley of Himachal Pradesh. This road leads to Manali via Chandratal and Rohtang Paas. Losar is also the last inhabited village on the Indian side of the Indo-China border. The petrol pump is ancient as it only shows the amount of petrol filled. Go there and fill up your vehicle tank at 12,270 ft. and give your brain a jog to calculate the amount to be paid
**How to Reach: Either hire a taxi from Manali which is around 146 kms or board the HRTC bus to Kaza 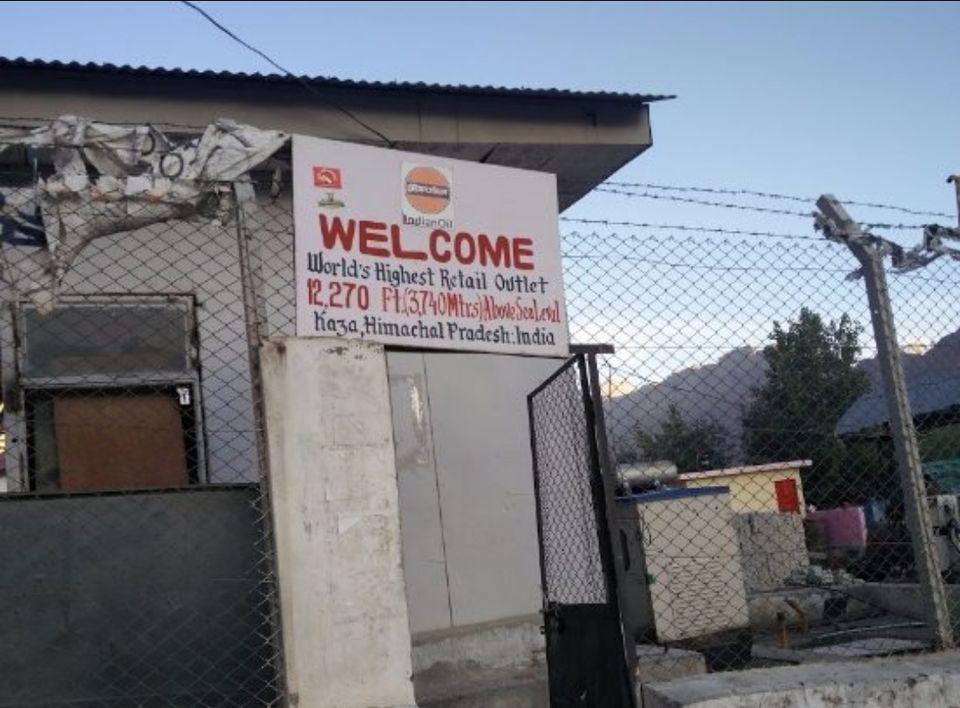 5.Highest Village in the World:
**Komik: This tiny village in Spiti Valley of Himachal Pradesh is the world’s highest village connected with motorable road is situated at a towering altitude of around 15,027 ft. above sea-level and is accessible mostly in summers by small roads winding around the Himalaya. The village is known for its scenic landscape and Buddhist Monastery. Hike around the small hills and slopes which are rich in fossil life
**How to Reach: Hire a taxi from Kaza which takes approx. 1.5 hours (~18 kms.) to reach Komik. The road leading to Komik is an unpaved mud road and is a steep winding uphill climb 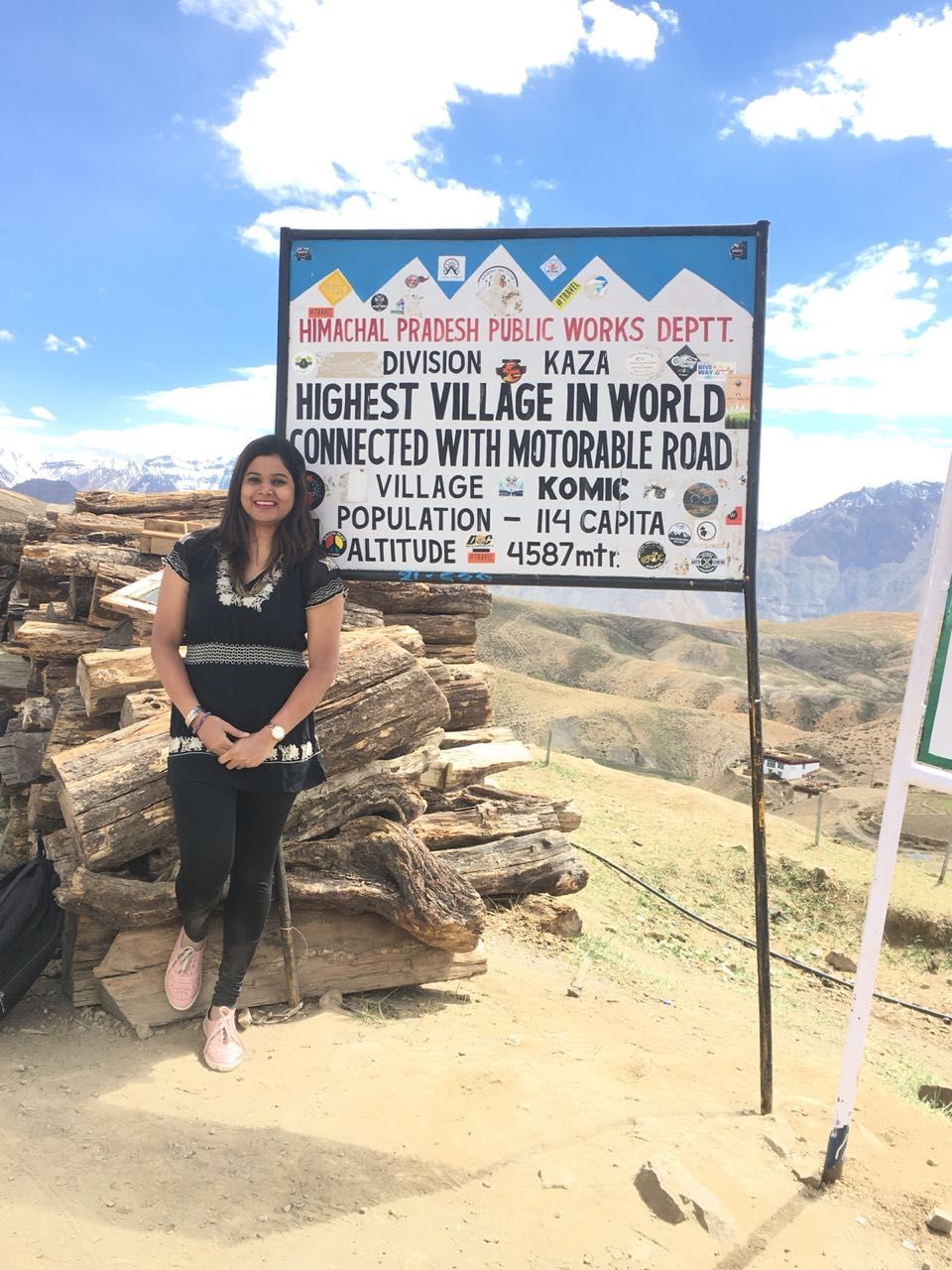 6.Highest Motorable Buddhist Monastery in the World:
**Lundup Tsemo Gompa Buddhist Monastery: This 14th century monastery is in Komik Village in Spiti Valley of Himachal Pradesh. It is said that it houses ‘Matrey Buddha’ or the future Buddha. The monastery has a fortified castle made up of slanted mud walls and the interior and the exterior are painted in beautiful bright colors. The monastery has a rule which states that women are not allowed to enter during the prayers which is usually twice a day, once in the morning and once in the evening. The monastery has a complex inside which is also the residential area of the lamas. Pay your respects and make a wish at 15,027 ft.
**How to Reach: Hire a taxi from Kaza which takes approx. 1.5 hours (~18 kms.) to reach Komik. The road leading to Komik is an unpaved mud road and is a steep winding uphill climb. The monastery is situated at the entrance. From the monastery, the village is a good 500 meters walk down 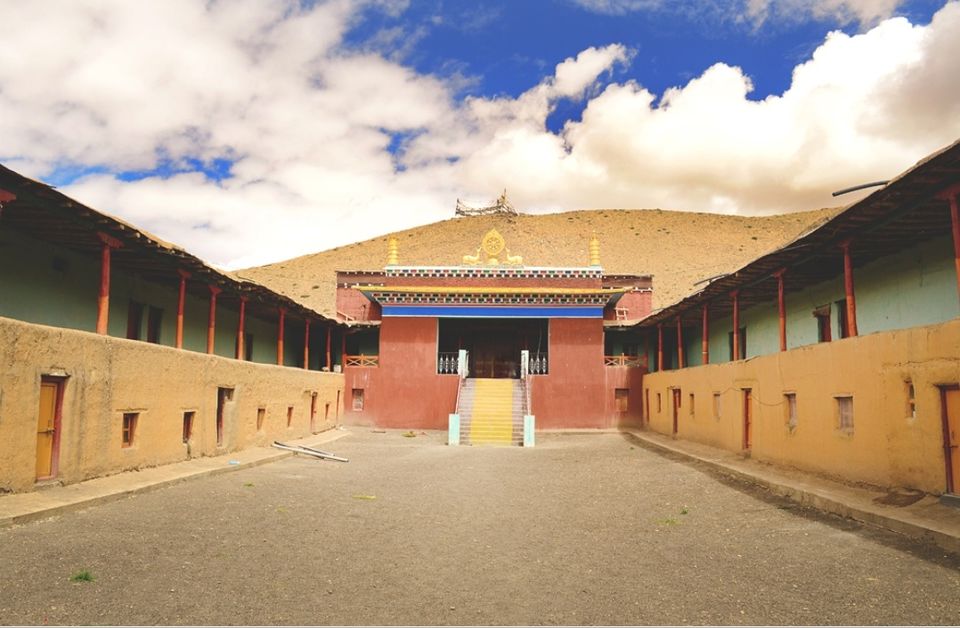 7.Highest Cricket Ground in the World:
**Chail Cricket Ground: It is situated in Solan District of Himachal Pradesh. The cricket is surrounded with tall huge pine and deodar trees. The ground lies on a hilltop that was leveled to build the pitch in 1983. During the colonial era, friendly matches were held, but now it is also used for various other sports like polo and football by the kids. Currently, it is under the possession of Indian army. Try one of your favorite sport at a level of 7,283 ft. high above the sea level
**How to Reach: The nearest railway station is Kandaghat which is approx. 30 km away. One can also hire a taxi or hop into HRTC bus from Shimla and cover the 49 kms. to reach this place

8.Highest battlefield in the World:
**Siachen Glaciers:  The Siachen glacier is a deadly posting at altitudes ranging from 13,000-22,000 ft. because of the freezing temperatures and avalanches. All you have is a vast swathe of snow and no signs of life. You are at top of the world yet entirely lonely. In 1984, Indian army’s Operation Meghdoot gave India control over the Siachen Glacier located in the Karakoram range, including its tributaries. Siachen glacier also has world’s highest helipad which is used only by the Indian army
**How to Reach: The Indian Army conducts an annual trek to Siachen glacier for civilians, between August to September every year. The trek begins from Leh, proceeding to the Siachen Base Camp which goes into the mountain slopes at 10,000 ft. and, from there, trek on to Kumar camp which is at 16,000 ft. The distance of the trek being 60 km both ways across 8-9 days 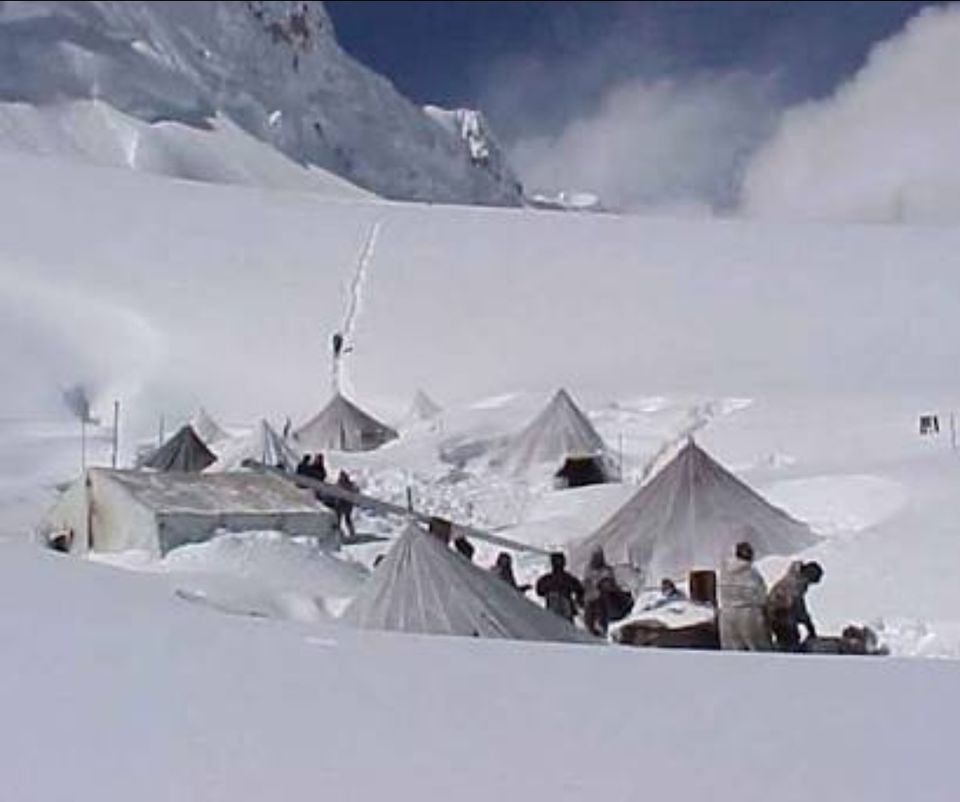 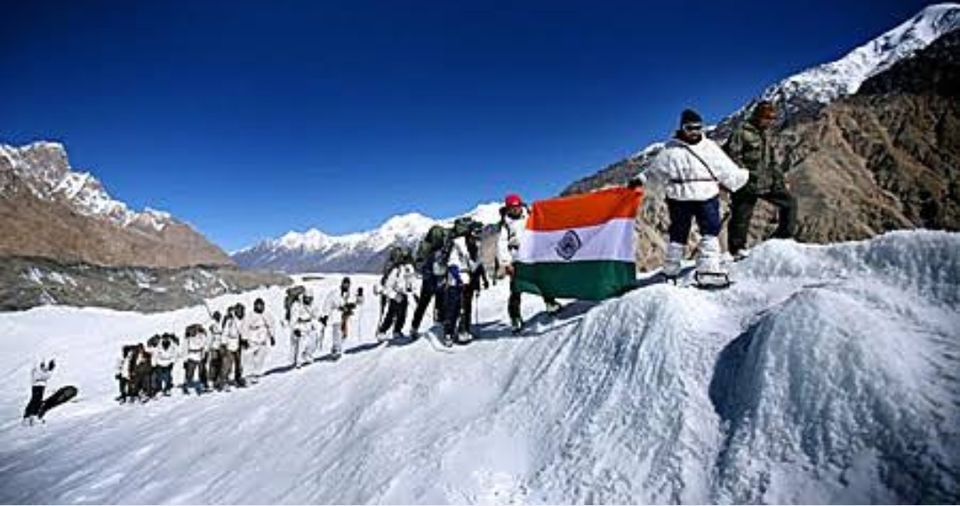 9.Highest Golf Course in the World:
**Yak Golf Course: The eighteen-hole golf course is part of a 6026-yard- long Indian Army base which is in the Kupup valley of Sikkim. The course has challenging fairways meandering across mountain streams in their full flow and its marshy and uneven ground tests the golfing skills of one and all. During winters it also hosts ice hockey, ice skating, skiing and baseball. Try and putt at 13,025 ft. above sea level between May to December **How to Reach: Hire a taxi from Gangtok or Siliguri. One need to apply for an inner line permit to visit any place beyond Rongli, a small town in Sikkim. It falls on Silk Route near Kupup/Elephant lake

10.Highest Tea Estate in the World: **Kolukkumalai Tea Plantations: It is situated 35kms ahead of Munnar in Kerala. Known for its excellent, flavorsome teas, this estate is also known for its panoramic views and the for the rugged mountains that surround it. Visitors at the factory can pick and process their own cup in the “Make Your Tea” program. One can also stay over-night at one of the guest houses or camps in the estate.  Treat yourself to a pack of tea at 7900 ft. above sea level.
**How to Reach: Munnar is connected to other cities in Kerala and Tamil Nadu by state transport buses. One can also hire a taxi to reach this place which takes about 90 minutes to reach Kolukkumalai from Munnar 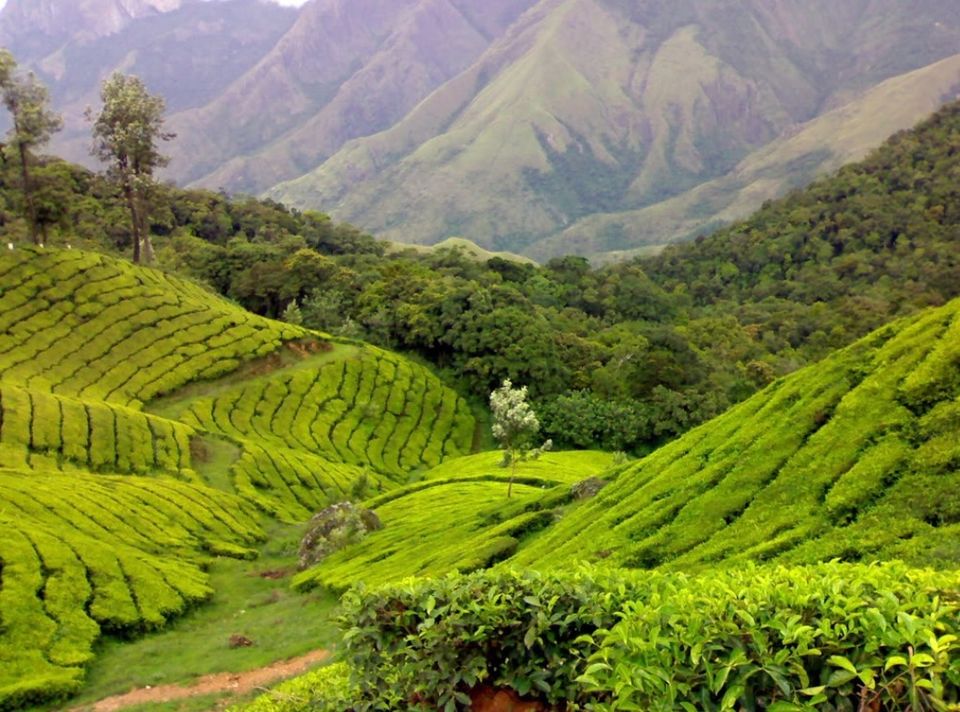 Burn one down and feel yourself melt into absolute euphoria.
So, how many you have ticked off?