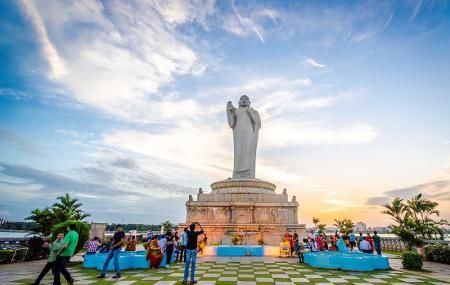 From 2011 to 2016, our Nizam's city was going to come to Hyderabad, or to say no contact has been left. Once the Christmas holidays were known at the time of 2014, we saw the places which had left for the first time. This time our journey started with seeing the laser show in Lumbini Park, but due to the time of the night, we could not even see the other attractions of Lumbini Park this time. This park attracted us again in February 2016 and this time we took the whole day here. See what's so special that this park has taken me so often.

This park located in the heart of the city was built in 1994. There are not many attractions in this park, the most prominent attraction here is the evening laser show, the second attraction is Hussain Sagar and its water activities, the third attraction is the small swings engaged for children, the fourth And the last attraction is the Rain Dance between the Rtfishal Falls. I will write this post according to the travel order and write according to daylight.

In February 2016, there were once again in Hyderabad. This time we had come from the bus and we chose the MMTS local train to travel locally. This is a convenient and cheap way to travel in Hyderabad. At this time Lumbini Park came from the Salar Ganj Museum, from there we took the auto to come and we got inside the park by paying ten rupees entrance fee. There was a notice board from the front in the park, which was told where it is located. Looking at this we can go first in place of choice.

The main attraction of this park is to be close to Hussain Sagar Lake and many swings in accordance with the children. We were first going to Hussein Sea. In this, my daughter saw the swing and after some time swinging her, we reached Hussain Sagar. I came here to recite the memories of Nainital flats. The crowd of people, like the food shops, were going to sell a piece of land, some old lady's cock was roaming around candy. Do not ask for the chaat-pakoda, tea-coffee and dosa. Oh yes ice cream is the main attraction of such places, how can it be overlooked. Apart from these, colorful balloons and small toys were also going for the children. They also roam around small children until there is little sale. Well, what would they do? They all got their way too. Among all these we reached the place where the steamboat boat ticket was getting. According to the per capita per person, this boat was taking to the Buddha statue built in Hussein Sagar. With a hundred and ten rupees, we started waiting for the boat to get our number. And yes, children who are younger than five years are free.

As long as our number came, we were admiring the beauty of the Hussein Sea. This huge lake built in the heart of the heart was built by Hussein Shah. This lake is called Hussain Sagar due to the huge size of this lake, spread across six square kilometers. When we started to guess its vastness, our number was not known. The boatman rotated everyone and moved forward. Here other water sports are also being started, such as jet-ski, parasailing. My own experience tells me that the fun of all these games comes with sea waves, what will happen in the stopped water. We had done all this in Goa, so there was no justification for doing so here. Seeing them, we reached Buddha Statue.

Battis Feet Deep is the statue of Gautam Buddha, composed of eighteen meter high rock alone in the middle of this lake. From here, the twin city of Hyderabad is also known as the holy city of Secunderabad. In the pre-determined time of fifteen minutes, we were photographed by sitting in our steamboat boat and back to Lumbini Park. When he came back, took tea pakoda from a shop and ate in the field with a green velvet sheets made in the nearby. Now the next goal was the children's park. There was a hammock here. I do not know what he speaks. There was a long pole, its place was made to sit in the circular area and moving round the goal it was going to a great height. Daughter insists on going to this, now even a ticket was taken. I do not remember the price of the estate, maybe 40 rupees. As high as sitting while sitting, sitting showed that it was taking up to the highway. In every round, it seemed that maybe the bottom would start to descend but that fucking was going upwards. It was a little scary, especially for a coward like me. By the way, the three-six-degree degree view of Lumbini Pak was pretty cool, but whose focus was to see. But it is said that the fruit of patience is sweet and that watch came when there was a land under my feet. After this he swings like a small slippery slide and doing it. In a while, we reached the Water Cascade, under which children were dancing as well as drunk in fake rains. After some time enjoying this, we once again got back to Chandanagar by sitting in the local train.