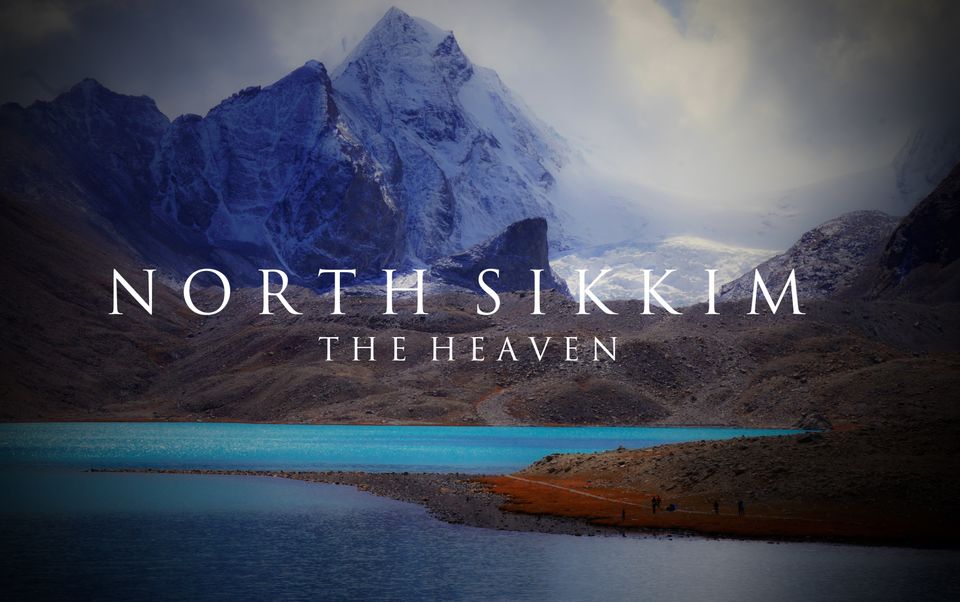 The nearest railway station is New Jalpaiguri (NJP) in West Bengal. NJP is well connected with all over the metropolitan city in India & very well connected with Kolkata. Several trains like 12343 Darjeeling Mail, 12377 Padatik Express, 13149 Kanchankanya Express, 13147 Uttarbanga Express, 12345 Saraighat Express, 15959 Kamrup Express and many more from Kolkata.
At first you have to reach Gangtok, the capital city of Sikkim. Sikkim Nationalised Transport (SNT) runs buses from Siliguri to Gangtok in every 1hr interval from 5am. You can also get share Jeep or can take a cab for Gangtok.

Bagdogra is the nearest airport from Sikkim. From airport you get cab or share Jeep for Gangtok.

For security purposes due to have 3 international borders you have to make an inner line permit which you can get from Gangtok. So for your safety reach Gangtok at least before one day. 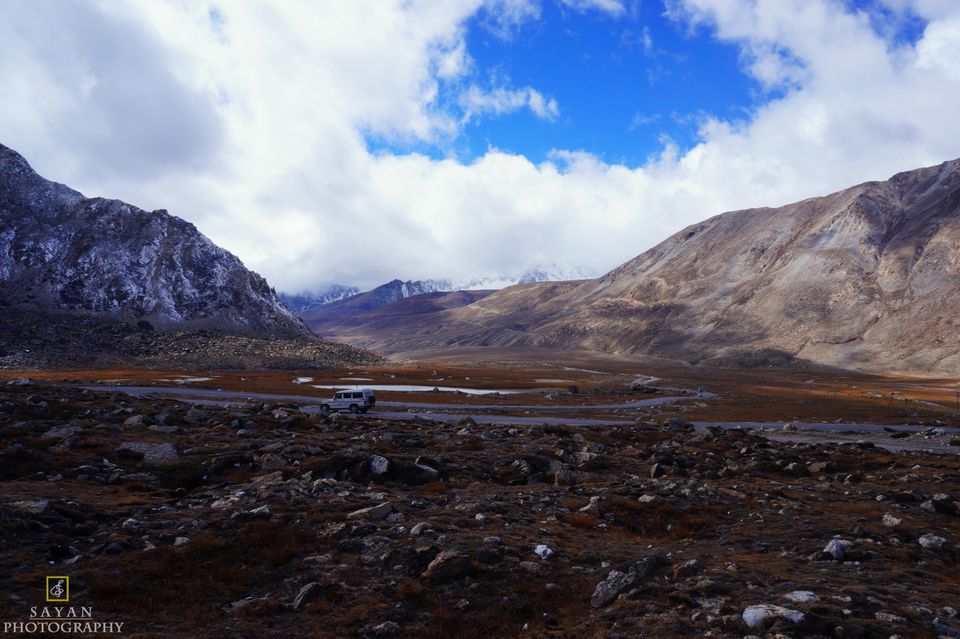 North Sikkim is such a wonderful destination in Eastern Himalaya. I visited North Sikkim in the month of October in 2019 during the great festival of Kolkata, Durga Puja. I Started my journey from Kolkata Railway Station.

In early morning I reached New Jalpaiguri. Sikkim Nationalised Transport (SNT) runs buses from Siliguri SNT bus stand in every 1hr interval for Gangtok. There is also available share cars. I took a bus at 11:00 am & reached Gangtok sharp at 4:30pm. That 120kms bus journey was unforgettable. A slight rainfall in green Himalayas created a romantic ambience. Gangtok is very neat & clean city and the view of hills across the city was wonderful. I booked a hotel room for a night stay and arranged for a next day trip to North Sikkim with a tour agency. 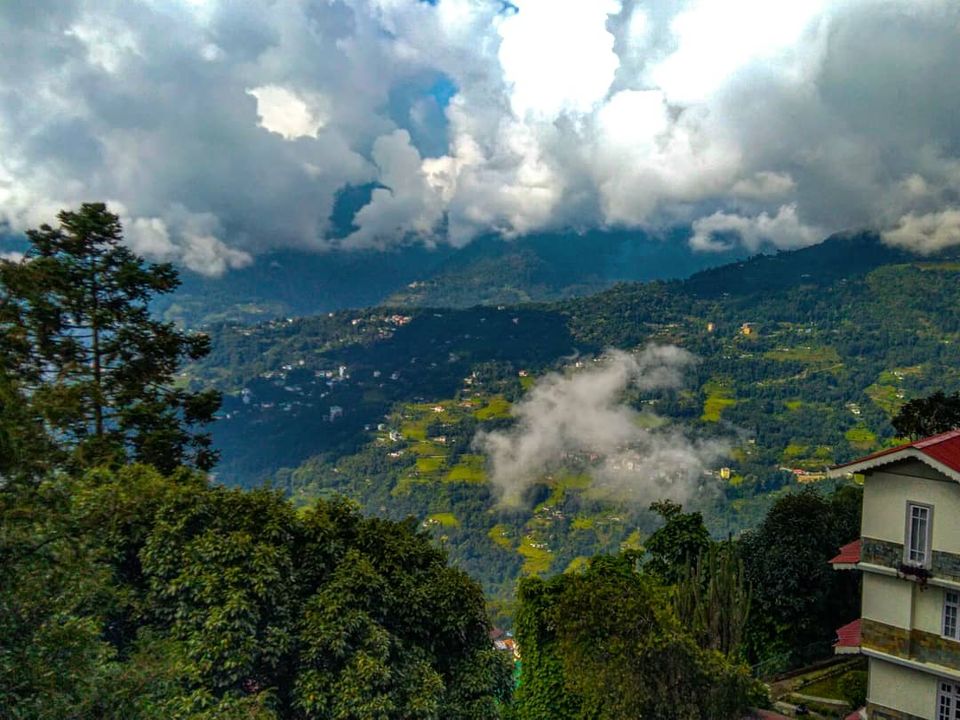 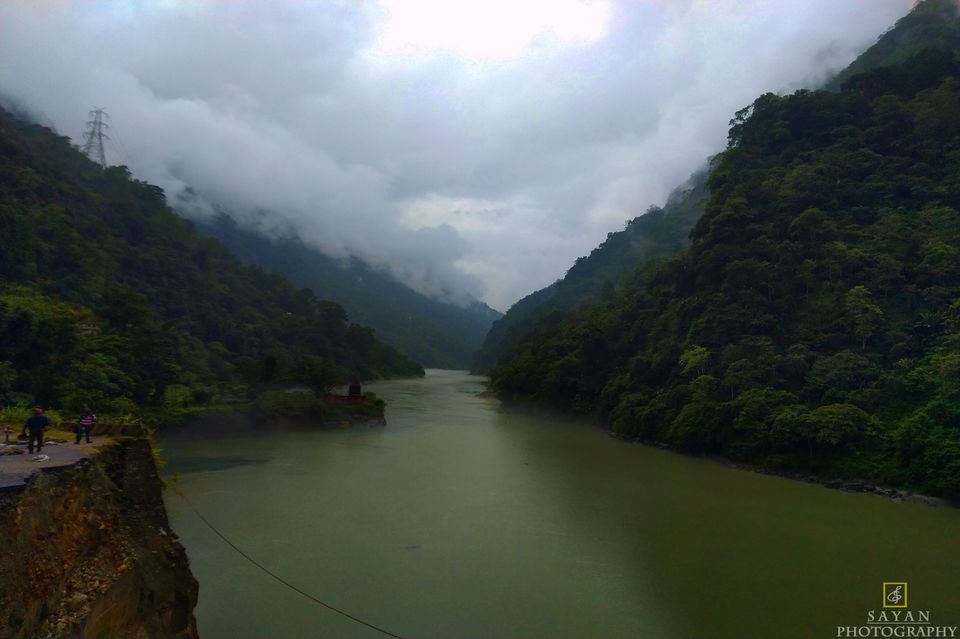 Now the actual day came. I started my journey for North Sikkim. I had to reach Lachen, a small village in the lap of Himalaya. Rainfall was continued. But the view of every turning of the road was amazing. There are 2 visiting places on the way of Lachen. 1st one is Naga Falls, an amazingly beautiful waterfall besides the road & the view was  remarkable. Another spot is Chungthang. It is actually a hydro-power project over the Teesta River named Teesta-Urja hydro project. Chungthang is the junction of Lachen & Lachung road. The car moved towards through the lush Green forest, clouds and rain, the audio player continued its playlist with romantic songs. You will be compelled to fall in love with the ambience. If I say outstanding it is very less for describing the beauty of Lachen. Lachen is something else. An overnight stay was in Lachen. And the final thing I enjoyed the dinner that night. It was too delicious. 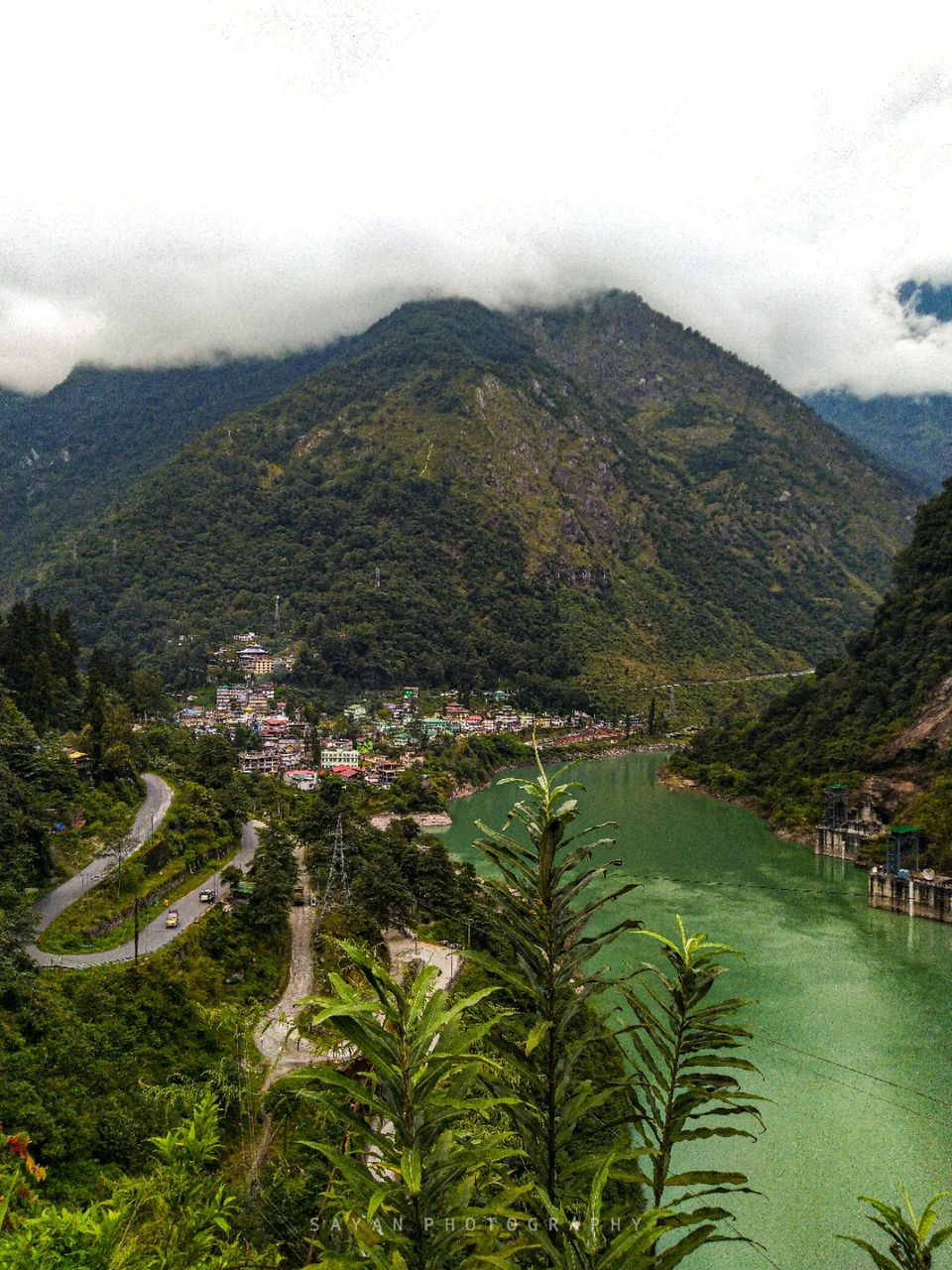 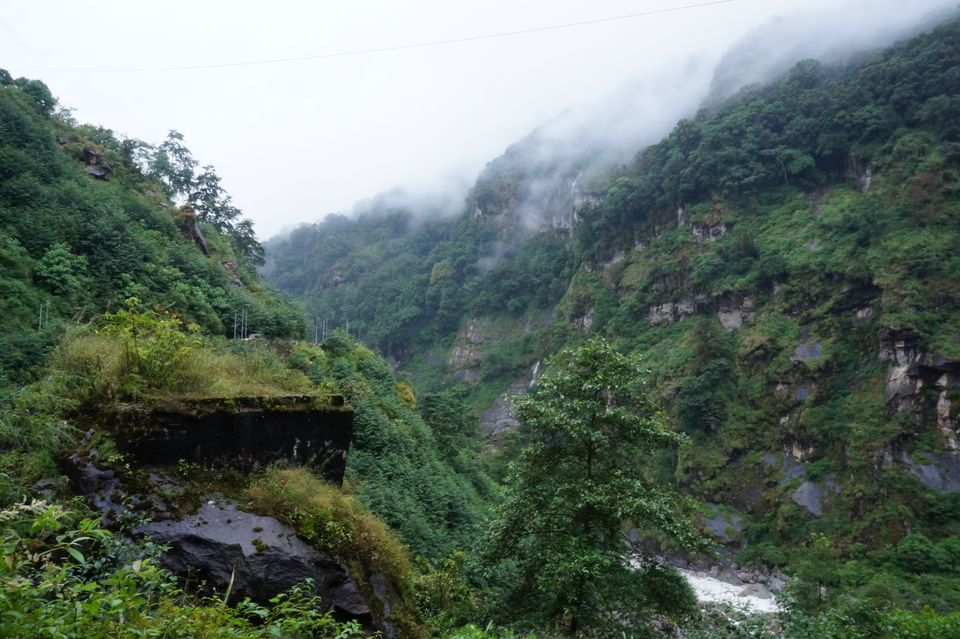 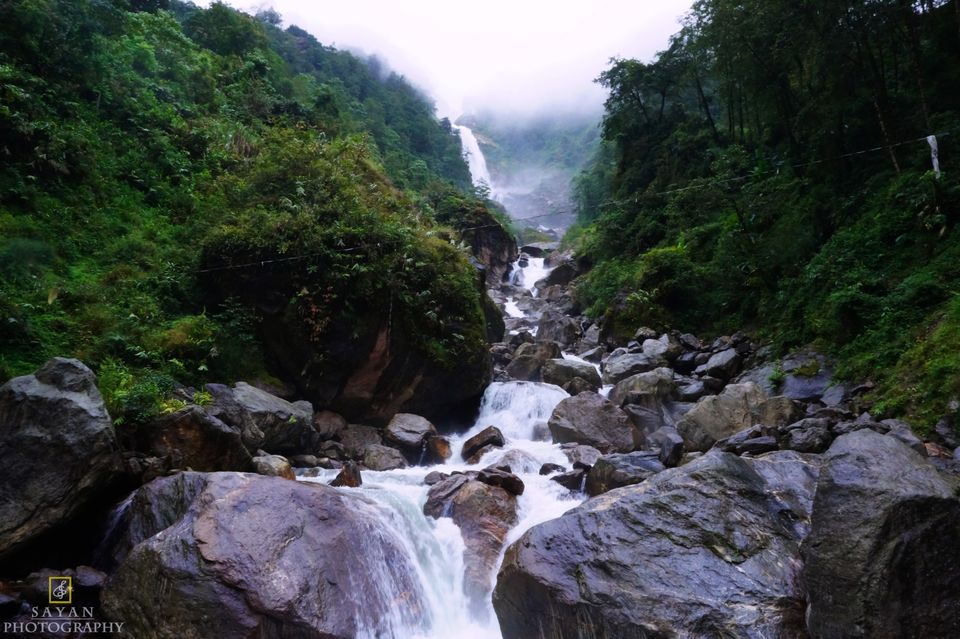 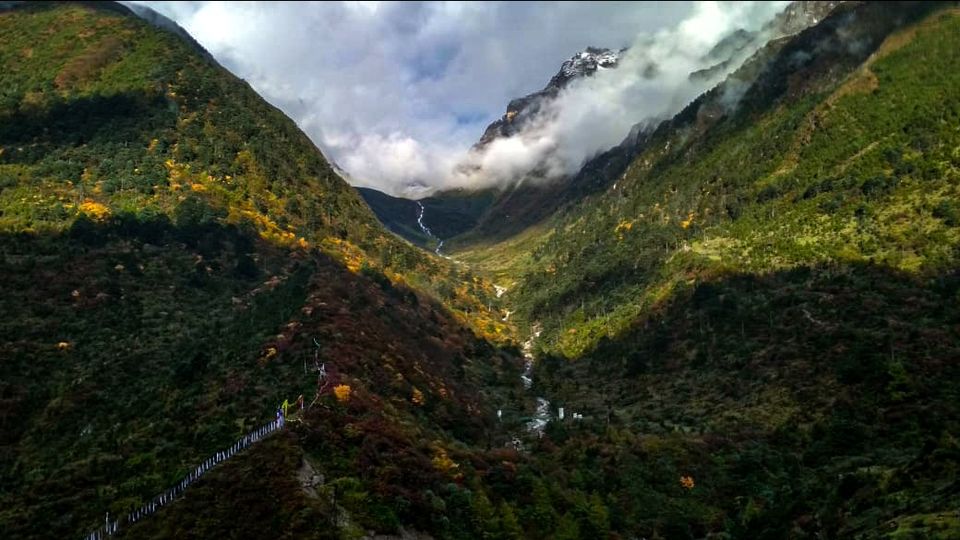 On the way Gurudongmar 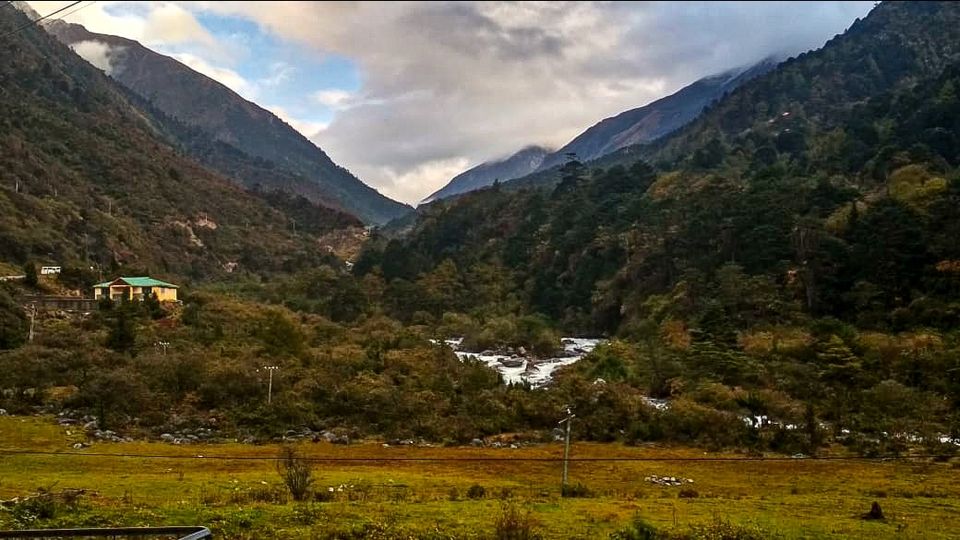 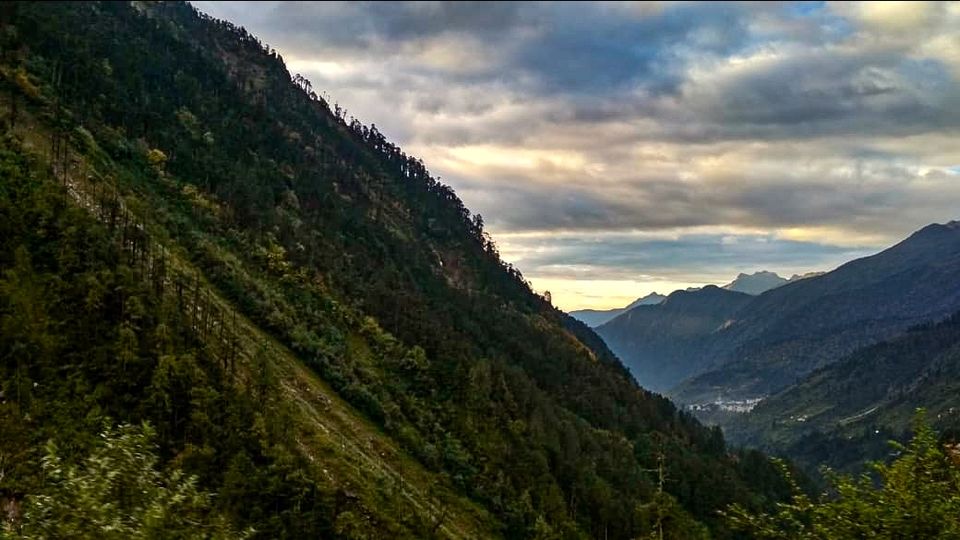 Alarm was ringing. When i checked my phone with my sleepy eyes it was 4.30 am. Opening the window and I observed the darkness across the hills was amazingly beautiful. I was excited for this day especially because of journey to Gurudongmar Lake. Approx 18000 ft height from mean sea level. Few tips for Gurudongmar, if you want to visit this place you have to start your journey at least in between 5am to 6am. 66kms distance from Lachen and the condition of the road is very bad. You have to reach before 10 am cause after 11:00 am or more the weather started to deteriorate. Lachen to Thangu valley this portion is very greeny, numerous of waterfalls over there. But Thangu Valley to Gurudongmar Lake is a cold desert. Not a single tree over there but the view was outstanding. Gurudongmar is nearly the Indo-China border. No photography is allowed in Thangu valley cause it is an army cantonment.
After a dangerous journey I finally reached Gurudongmar Lake. The fresh blue water and snow capped peak opposite to the lake, it was heaven. It can't be compared with any other things. After spending half an hour, I returned to hotel and left for Lachung and reached in the evening.

Gurudongmar Lake with it's blue water 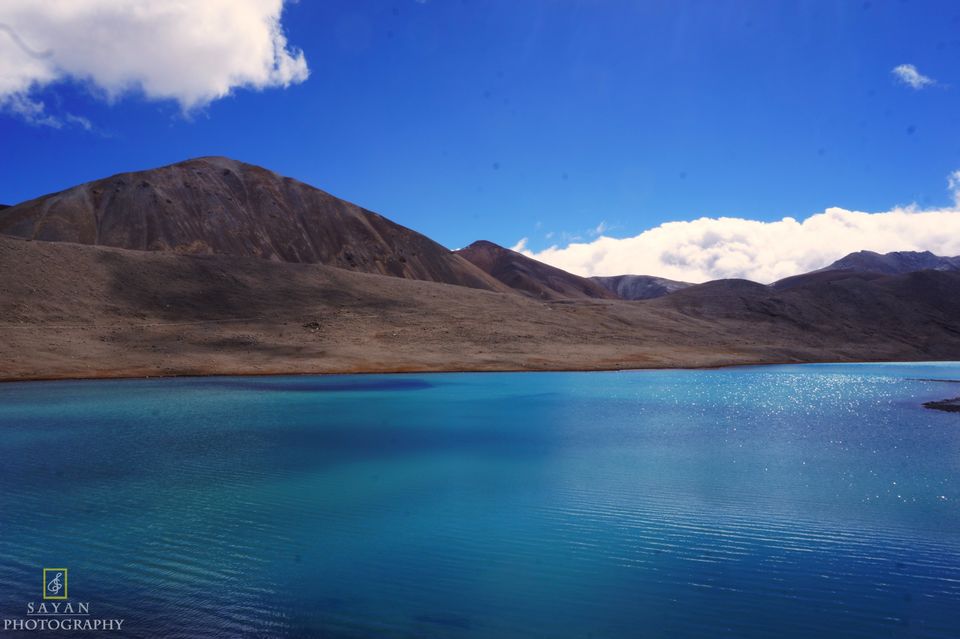 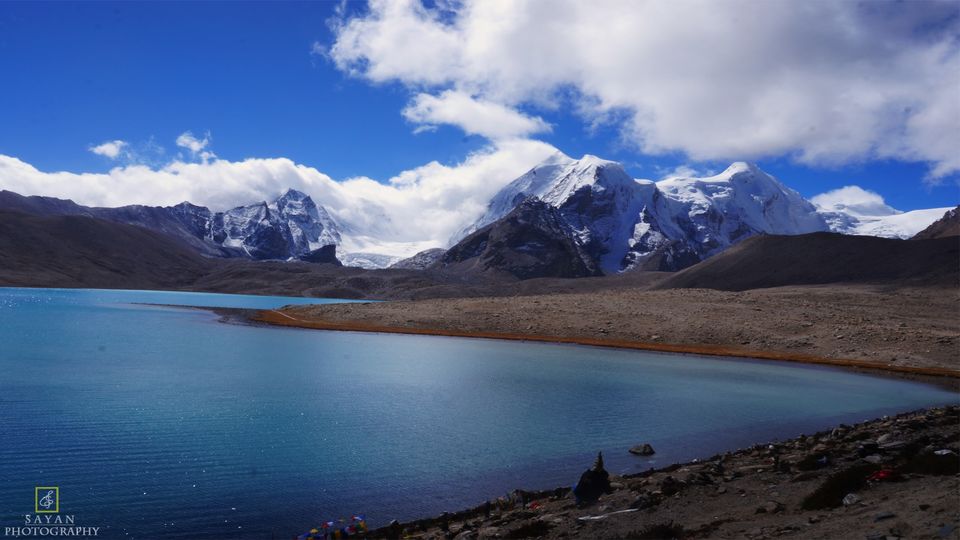 Gurudongmar is not far away 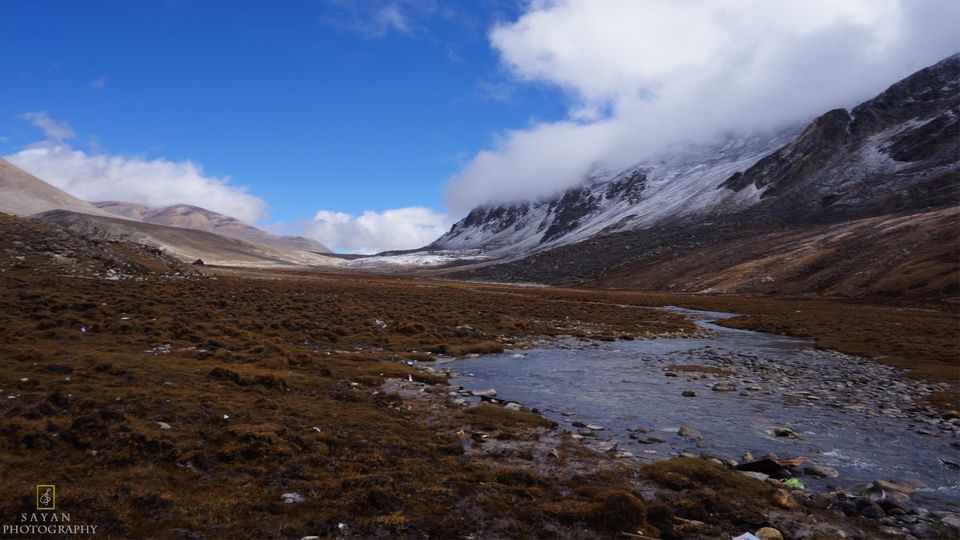 Near to the Peak 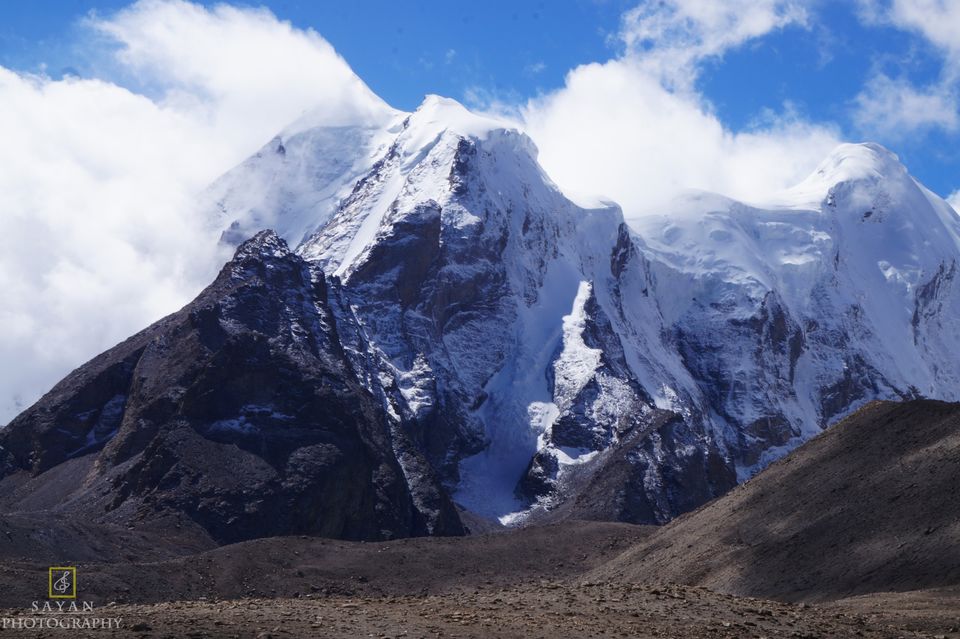 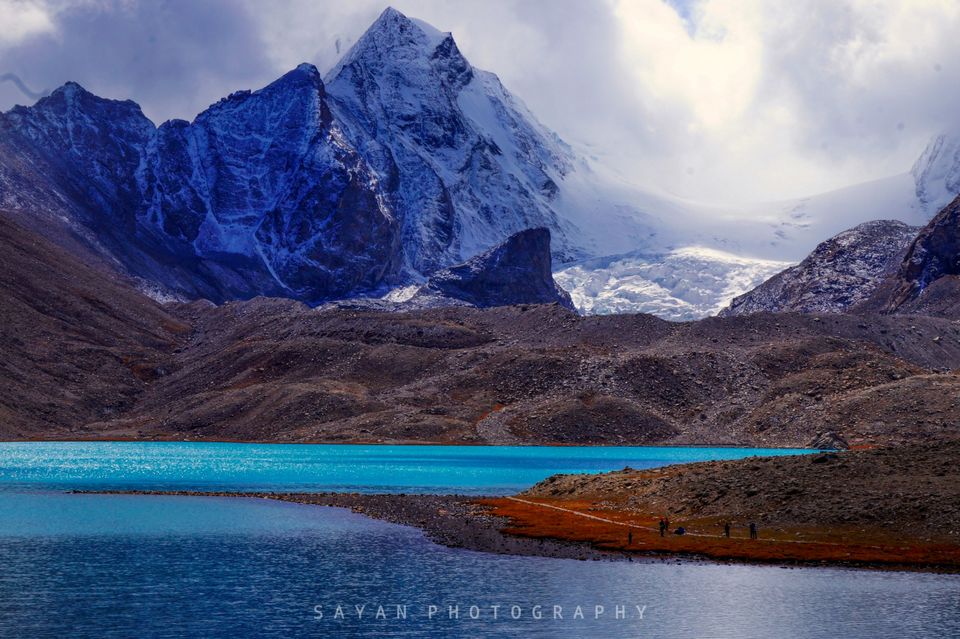 And the final day came. The weather on that day was very pleasant but little bit cold. The Driver called me to see the last day of my trip. Yumthang Valley & Zero Point. Yumthang Valley is called the valley of flowers but unfortunately October is not the season of flowers. After 27kms of journey between the green forest I reached Yumthang. A green valley along with the Teesta River and the 360° view across the valley was mind-blowing. Zero Point was not so far away from Yumthang but you have to make a permission and have to pay extra for it. Little bit snow over there and the view across the hills was remarkable. Capturing all moments now I have to return in Gangtok. After lunch in Lachung hotel I left for Gangtok and arrived in the evening. It started to rain again. 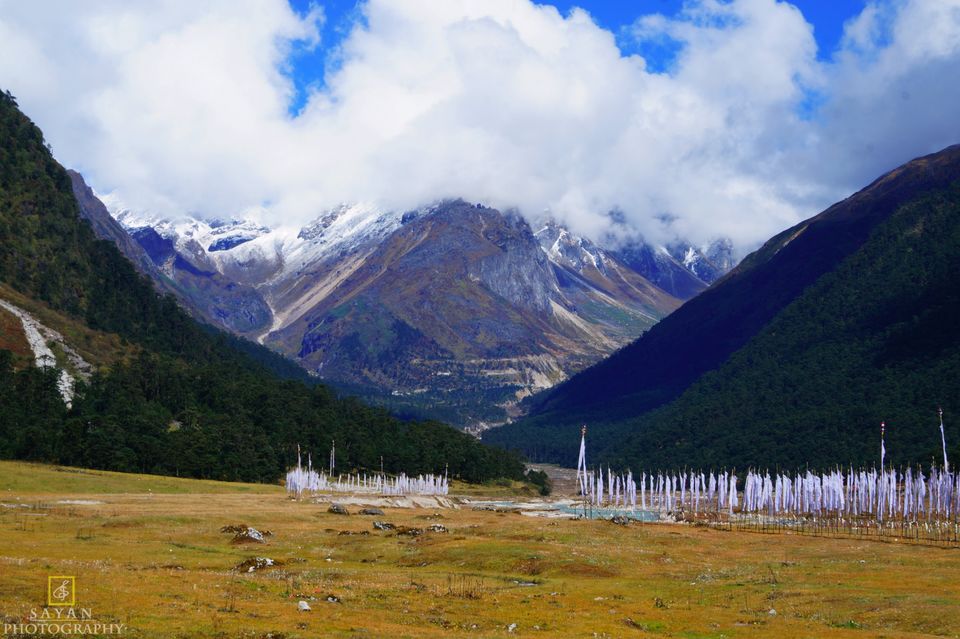 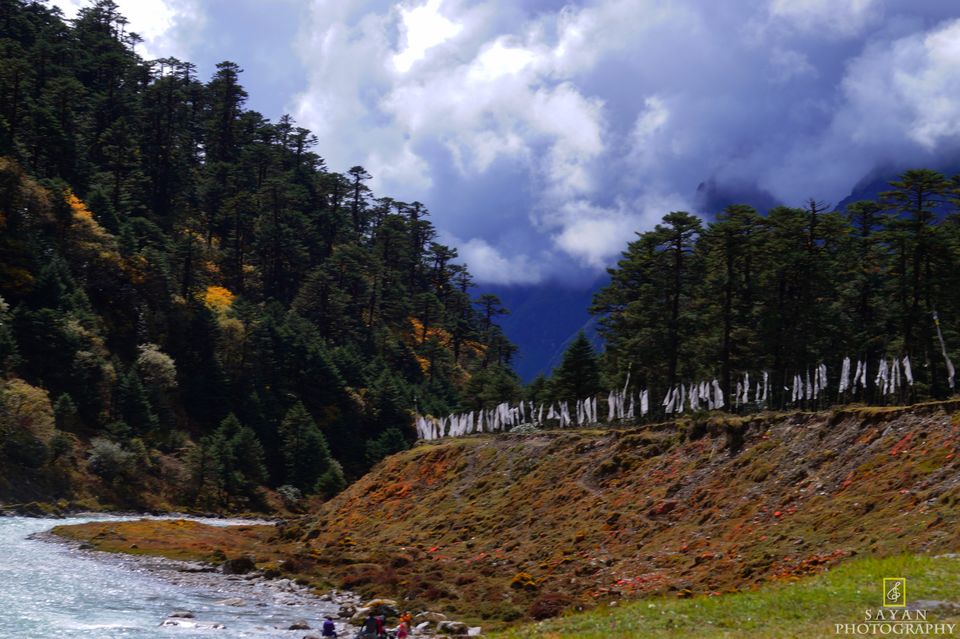 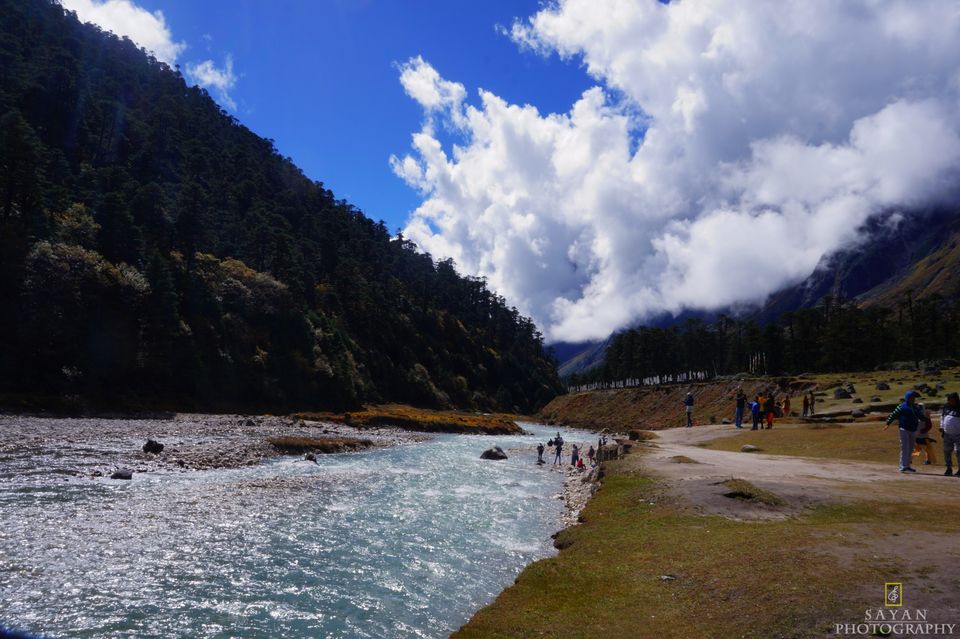 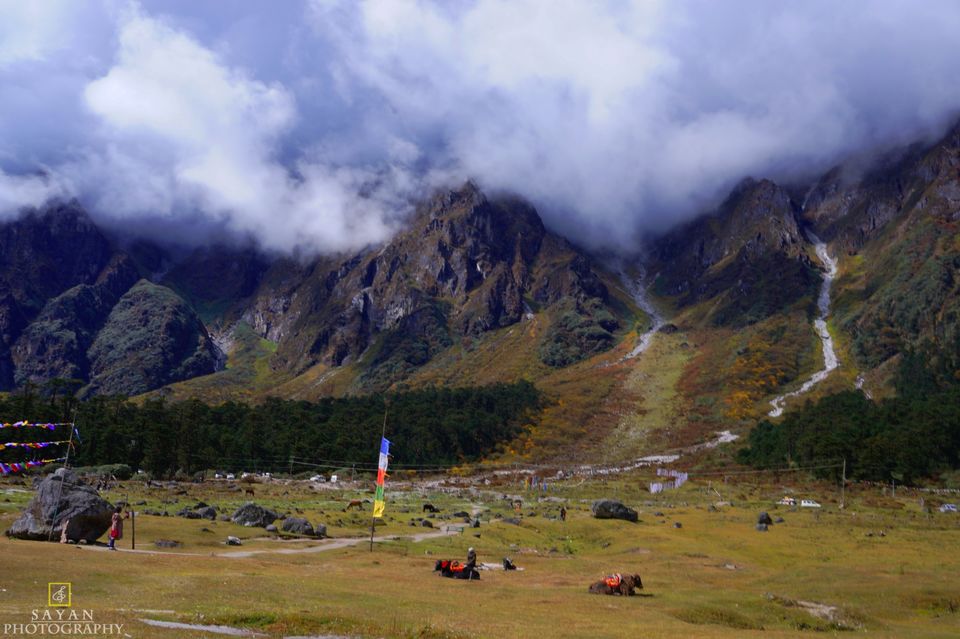 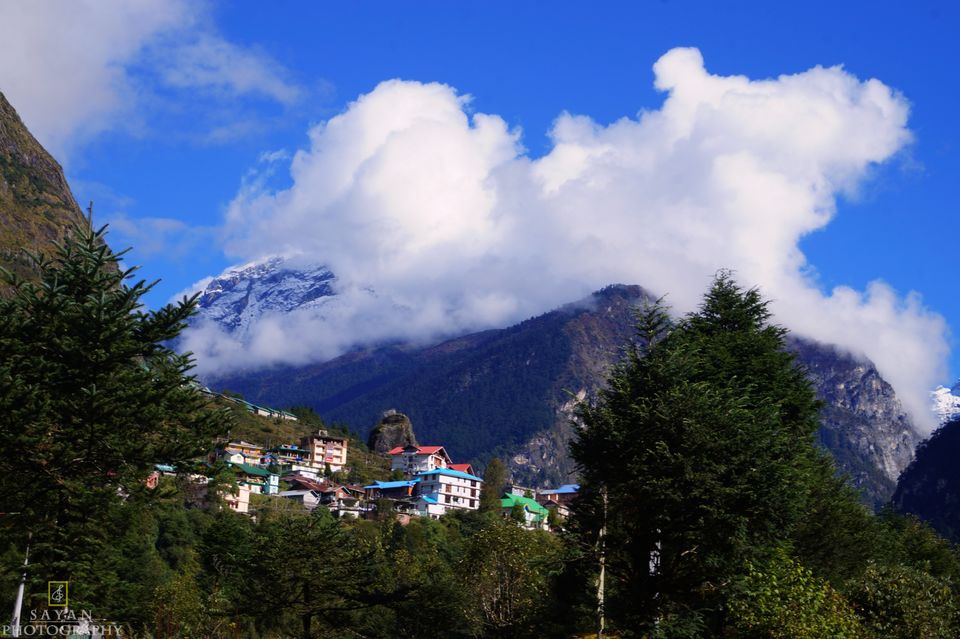 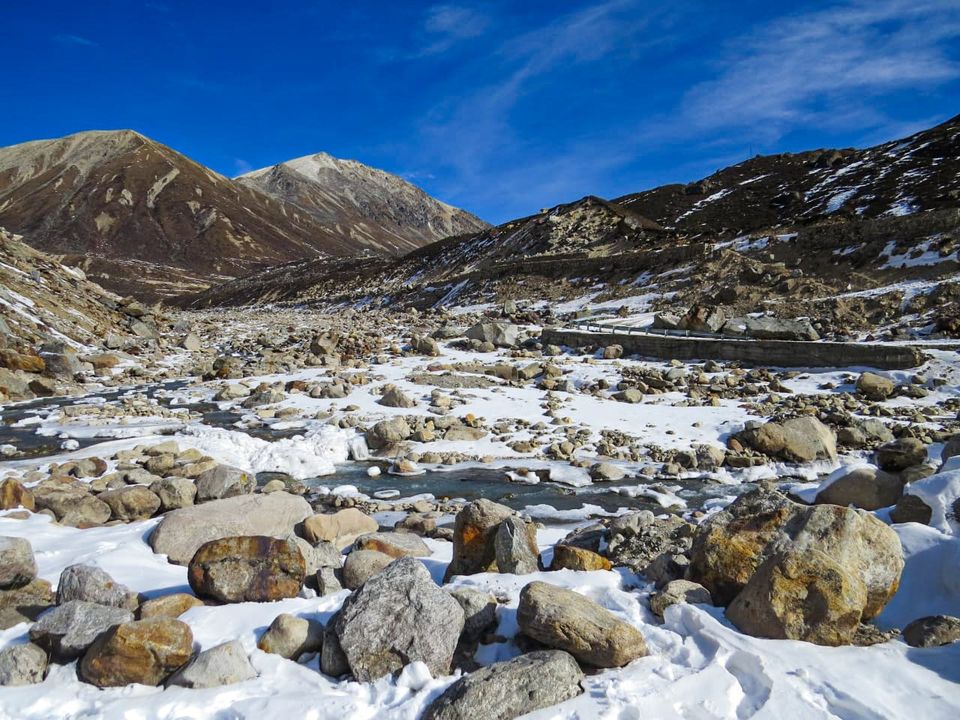 I kept this day basically for rest and shopping in MG Marg, the main market and mall road in Gangtok. 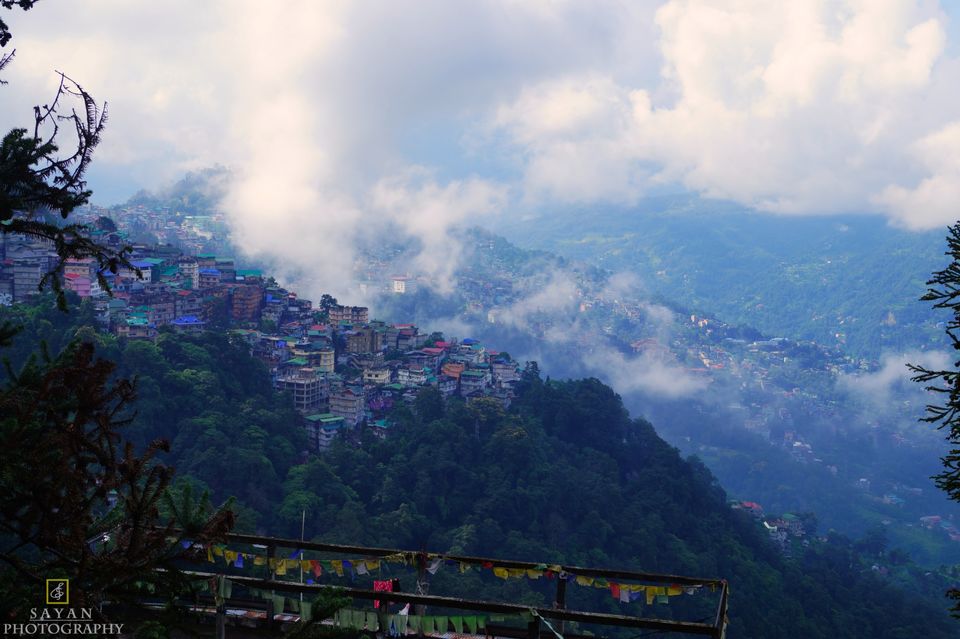 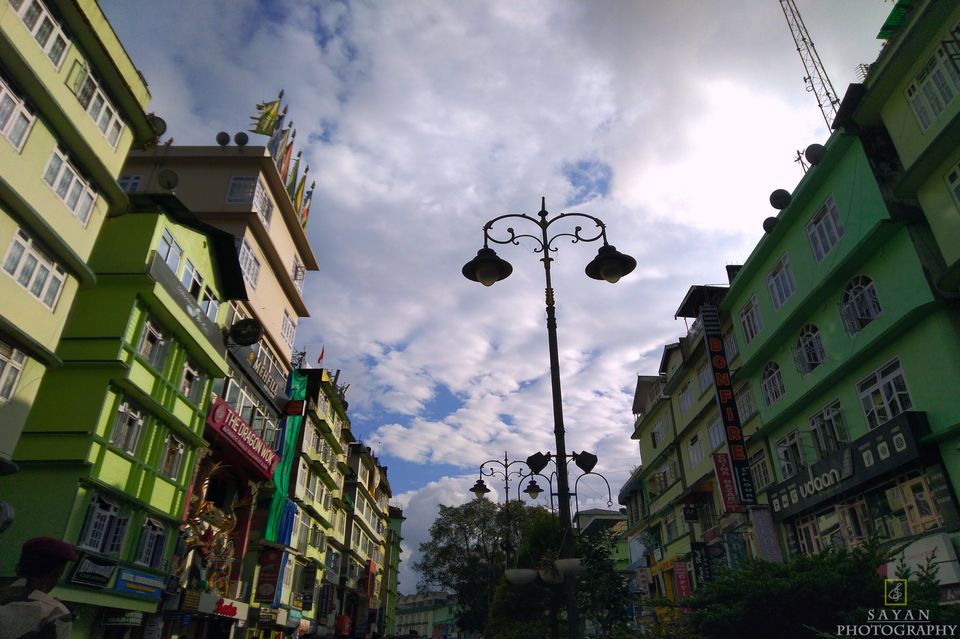 In the morning I woke up and went to the bus stand to spend my ticket. I booked a ticket for 11am bus and reached Siliguri 5pm sharp. Train was from New Jalpaiguri at 8pm. 12344 Darjeeling Mail.

I arrived Sealdah Station sharp at 6:30am. The trip ends here. Lots of memory lots of fun and the trip is unforgettable. 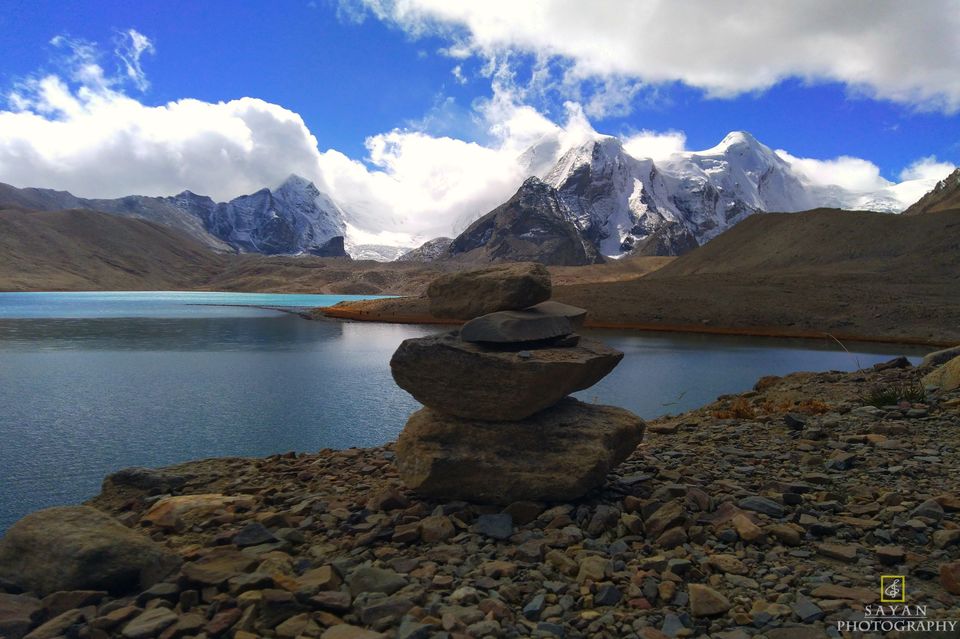