It was a sultry afternoon in Goa in October and we were searching for a place which was peaceful and provided the much needed relief from the crowds. We decided upon visiting Gokarna, a small town in Karnataka, as we also had always wanted to visit the Gokarna Mahabaleshwar temple. We started early in the morning by road and reached Gokarna via Karwar by noon. On the way we were compelled to visit the Devbagh beach at Karwar for its spellbinding views as shown in the picture below.

The road, which takes you to the small town from the highway, is narrow and winding. As we approached the resort, the scene changed from dusty roads to pathways lined with silver oak trees and banana plantations. The midday sun had cast its golden colour on the town and the mountainside. There were hardly any people around. We were happy that our choice of holiday was right. The town is a sleepy town with few shops and worn down houses.

We were a bit apprehensive about our choice of the hotel. We were welcomed by Ravi and Kishore, two young boys of a mountain top resort, known as Paradise Resort, overlooking the Kudle Beach. It was a beautiful place surrounded by palm trees in the midst of a jungle. The cottage we had chosen online was far better than our expectations. It was like a log cabin with a panoramic view of the jungle. The ground floor had a huge bathroom with huge glass French windows overlooking the jungle.

After a quick lunch we decided to explore the Kudle beach which was nearby. We were provided with a guide who took us through a twisting narrow path covered with dry leaves and rocks winding through the jungle. We were thankful that we had worn shoes else it would have been difficult to walk on the rough terrain. The beach was nowhere in sight for a long time and just when we had started wondering when this hopping on rocks would end, we were greeted with a panoramic view of the Kudle beach. It was simply mesmerising. The sun's rays danced on the waters creating a magical shimmering effect on the waters. The beach was lined with greenery and thankfully there were very few visitors. We waded through the waters and walked bare foot on the sands along the entire stretch.

While on one side was the aquamarine water of the Arabian sea, the other side was lined with the rocky mountains of the Western Ghats. The wind was soft and fishermen's boats sailed lazily through the waters. We noticed some food shacks and decided to have snacks at one of them. We chose the one at the end of the beach which gave us a good view of the expansive beach. It was very relaxing and we decided to leave as the golden sun had set and darkness spread over the beach. The sky lit up with the stars and the moonlight played with the waves and silvery sands. The atmosphere was ethereal.

The next day we woke up early in the morning and set out to visit the Om Beach which is on the other side of Kudle Beach. The winding roads and the steep steps made us breathless and suddenly at a corner was one of the most beautiful natural scenes we had seen. The waters were crystal clear and the beach had a unique shape, like that of the letter "Om" in Devnagiri script. The view from top was breath-taking and the beach was deserted except for a few foreigners who could be seen meditating. We soaked in the sun and as we neared the waters the foamy surf swirled around our legs. The peaceful blue sky with wispy cotton clouds having bright yellow fringes left us feeling absolutely relaxed. We left for lunch at the resort and promised ourselves that we would revisit this place.

The Kudle beach is west facing. Om beach, Half moon Beach, Paradise Beach (also known as Full moon) and Belekan beach are south facing. We had no time to visit the other beaches, a decision we regretted later. Mirjan Fort is a beautiful fort located in the village of Mirjan on the west coast of the Uttara Kannada district in Karnataka and is also worth visiting.

The Gokarna Mahabaleshwar temple is a must visit. This temple in Gokarna is an ancient temple dedicated to Lord Mahabaleshwar, an incarnation of Lord Shiva. The temple is considered as pious as the Shiva temple at Varanasi or Kashi in Northern India and hence is known as the Dakshin Kasi. This temple enshrines the Atma Lingam of Lord Shiva. According to the legend, the Atmalinga was placed at Gokarna, in the temple precincts, by Ravana, when he carried it from Mount Kailash in the Himalayas. The temple is built in a classical Dravidian style of architecture.The temple has a small hole in the sanctum sanctorum from where devotees can see the top of the Atma Linga. The best time to visit the temple is during the festival of Shivaratri which marks the day Lord Shiva was born. During this festival, Rathyatra (Travel on a Chariot) is held. 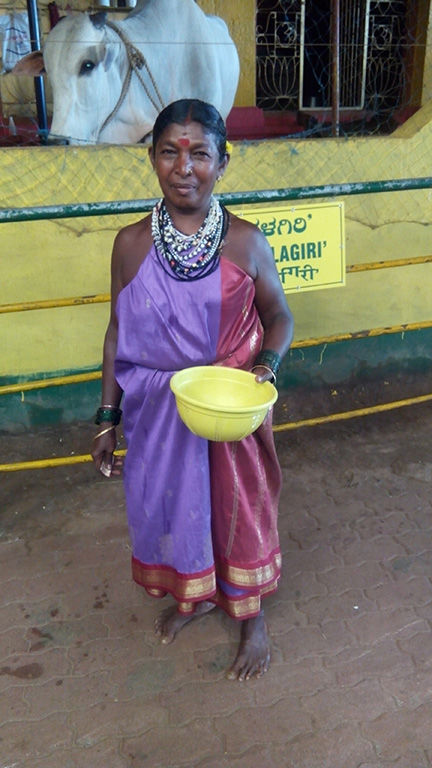 The next day we decided to visit the famous Murudeshwar Temple a few kilometers away from Gokarna. This temple is built on the Kanduka Hill which is surrounded on three sides by the waters of the Arabian Sea. Murudeshwar is a picturesque place situated between Honnavar and Bhatkal. Murudeshwar is also known for the Murudeshwar Fort and wonderful beaches. Nearby, Netrani Island, is also a very popular spot for tourists as it offers excellent boating, snorkelling and scuba diving opportunities.

The temple and the statue of Shiva 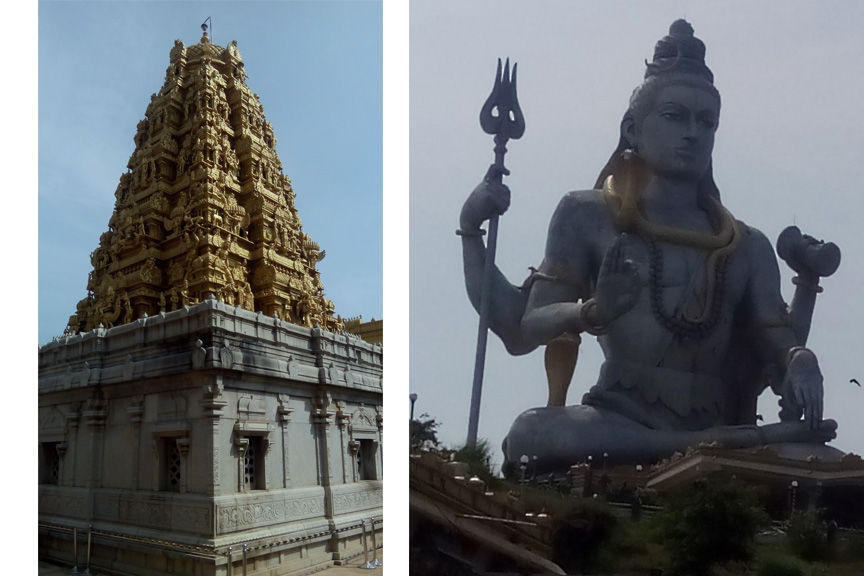 Murudeshwara has a railway station on the Mangalore-Mumbai Konkan railway route.

The Rajagopura at the entrance of the temple complex is the world's tallest, standing at 249 feet. The Gopura has 22 floors and is the only Gopura to be fitted with elevators. The view from the top is breathtaking and offers a 360 degree panoramic view of the Arabian Sea surrounding the temple.

The next morning we left for home promising ourselves another trip to this lovely destination.

1) Gents are not allowed to wear shirts while entering the sanctum santorium of the Mahabaleshwar temple. Ladies can wear traditional Indian outfits.

2) If you are a fish lover then visit the hotel Fish Land at Honnaver.

3) The Paradise resort serves only vegetarian food which is very tasty. They do not accept credit cards. Please confirm before booking. Have lost their business card but you can search online.

3) Please do not visit any of these places especially the Murudeshwar temple during the vacations as they are very crowded and you have to stand in long queues for darshan.

4) Always carry an extra pair of clothing while visiting the beaches as the pristine blue waters tempts one to take a dip.