Want to avoid the weekend rush in Munnar? Here is your unheard quaint little escape. 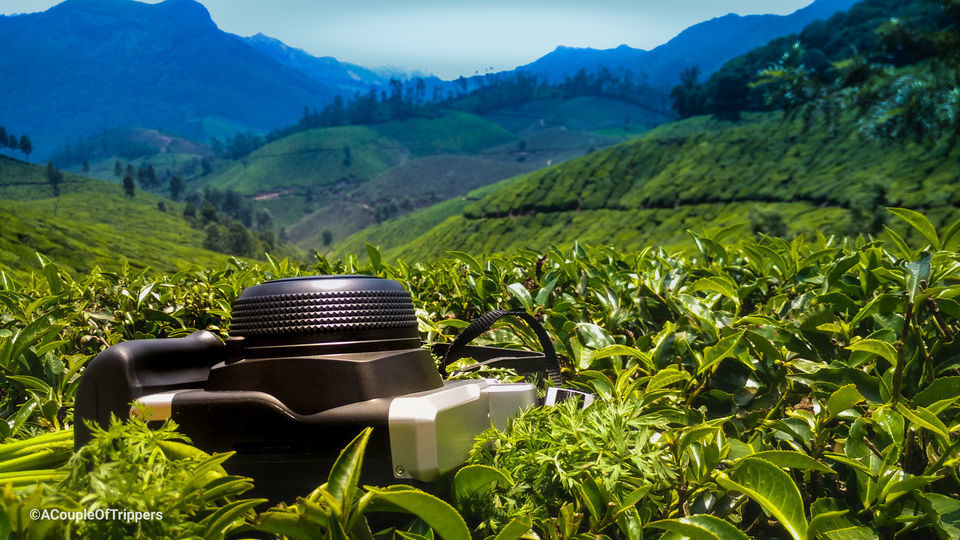 Most of us who love to travel know about the charming beauty of Munnar, about the rolling hills, the highest tea estates in the world that it owns. But this also means that it can be busy during the weekends. The weekend crowd that Munnar attracts, especially during summer can easily spoil your holidays and your peace of mind. Being one of the honeymoon capitals of South India, it attracts honeymooners all year round. Hotels can be overpriced, the curvy western ghat roads can be traffic clogged and restaurants can be crowded making it no better than "Bangalore on a Friday evening!" (People who live in Bangalore know what i mean). So weekends can be a tough time in Munnar.

We were in a similar fix while planning our road trip to Munnar. Starting on a Friday of an extended weekend and with 5 days of holidays ahead of us, we wanted to spend the weekend untroubled. The plan was to reach Munnar on a Monday, when finally the crowd will be gone and serenity will return! After almost half a day's research and fiddling with our route on Google Maps, we found a way!

About 40 kilometers before Munnar, is this hidden gem called Marayoor. This quaint little town in the Idukki district of Kerala is situated in the eastern side of the Western Ghats. Marayoor is the land of pristine sandalwood forests, prehistoric megalithic dolmens belonging to the Stone Age. Surrounded by hills on all sides, this place is an untouched beauty that offers some spectacular views, with magical sunsets. It is a 'must' on your next trip to Munnar, especially for those who like to explore the unexplored!

When to travel to Marayoor/Munnar

The best time to visit is all year round. The climate is comfortably pleasant all throughout the year. Here is the month/season wise breakup of the climate so that you can plan your trip accordingly!

Summer:(April-May): Summers in Munnar is refreshing as you get to run away from the heat and stuffy weather of Bangalore. It is mildly cold, so bring along a light jacket for basic protection. Occasional rains are also common during this time.

Monsoon:(June-August): If the idea of monsoons and mountains thrills you, this is the perfect time for you to visit. The frequent heavy showers will give a misty experience in Munnar. Though the road conditions will not be ideal as it will be slippery and muddy, so avoid travelling during the night.

Winter:(September-March): Just after the monsoons, September is the most ideal time to visit. You will get to witness the iconic lush green tea estates and bountiful waterfalls, with the occasional showers. October-November and February-March are comfortably cold. December-January are the coldest months, but if you are up for embracing the chill, this is the time for you!

Important Note: Nilgiri Hills which literally means Blue Mountains got its name from the blue flowers Neelakurinji, which blooms once every 12 years. The next blooming season is August-October 2018. So pack your bags and embark on this iconic journey this year.

By Air: Cochin International airport, Kerala is the nearest airport.

If you are starting from Bangalore, the above route is the easiest and the shortest. We started on a Friday evening at around 4:30 PM. You need to cross Anamalai Tiger Reserve and Chinnar WildLife en route to Marayoor. Considering wildlife safety aspects, we decided to stay the night at Salem. This also gave us the time to recharge and prepare ourselves for the thrilling ride in the Ghat section, the next day.

Travel tip: Decide if you want to start in the morning or evening! In my opinion, a night journey on the highway is always more adventurous, but travelling during the day in the curvy mountain roads provides you with breathtaking views with the terrain changing every few kilometers!

All pumped up for the ride! 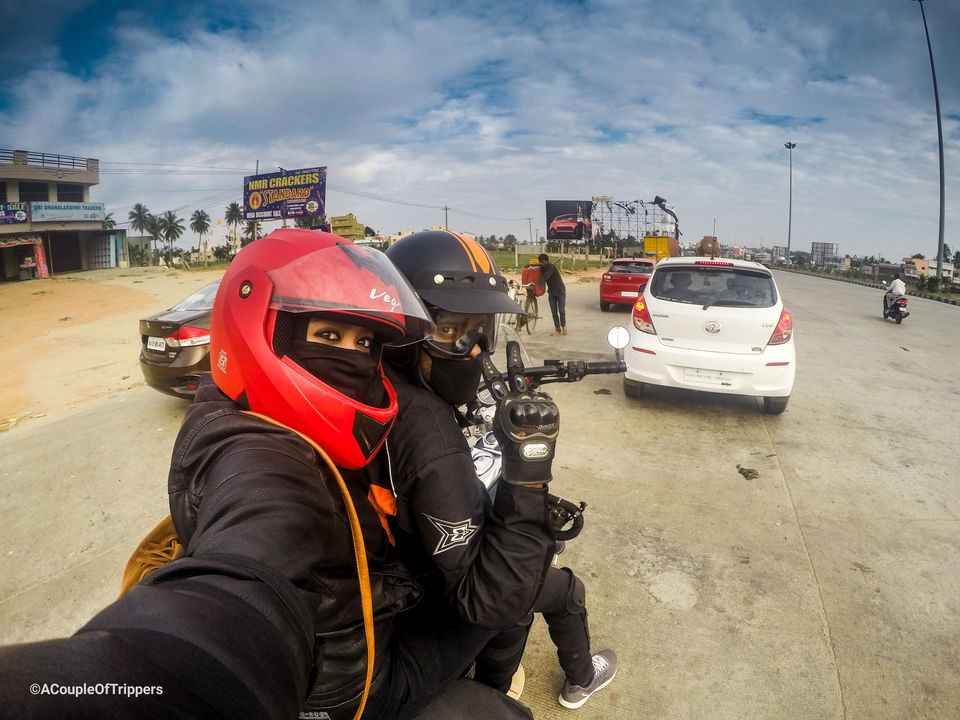 The NH44 which connects Srinagar to Kanyakumari is one of the best highways to ride on! 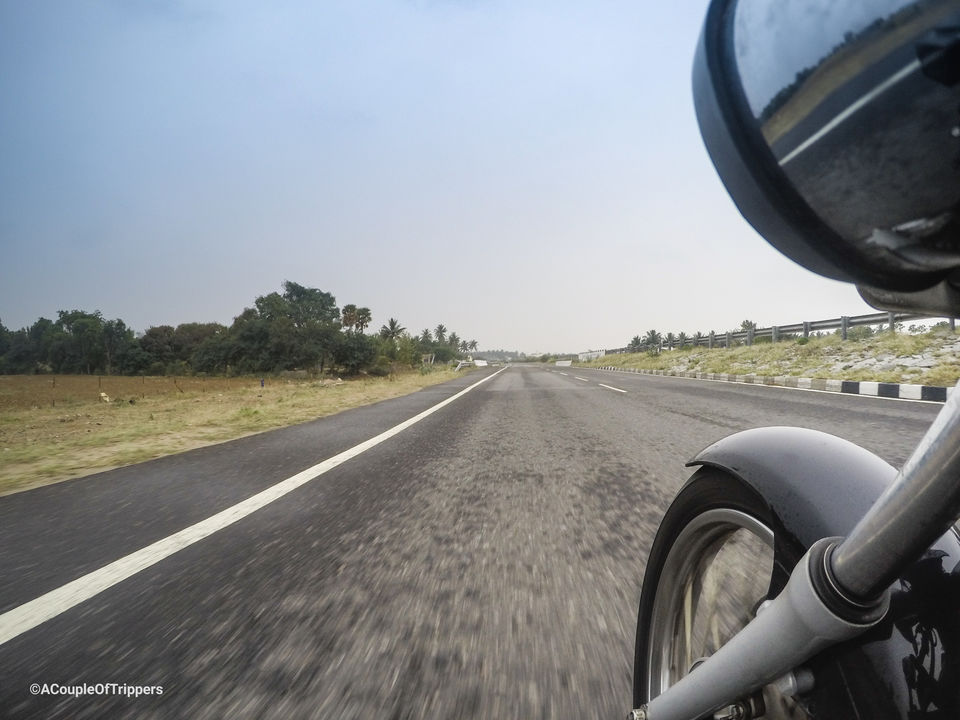 From Salem, we left by 9 am the next day and started for Marayoor.

Small hills decked on sides of the narrow highways increased our anticipation for the Western ghats ahead of us! 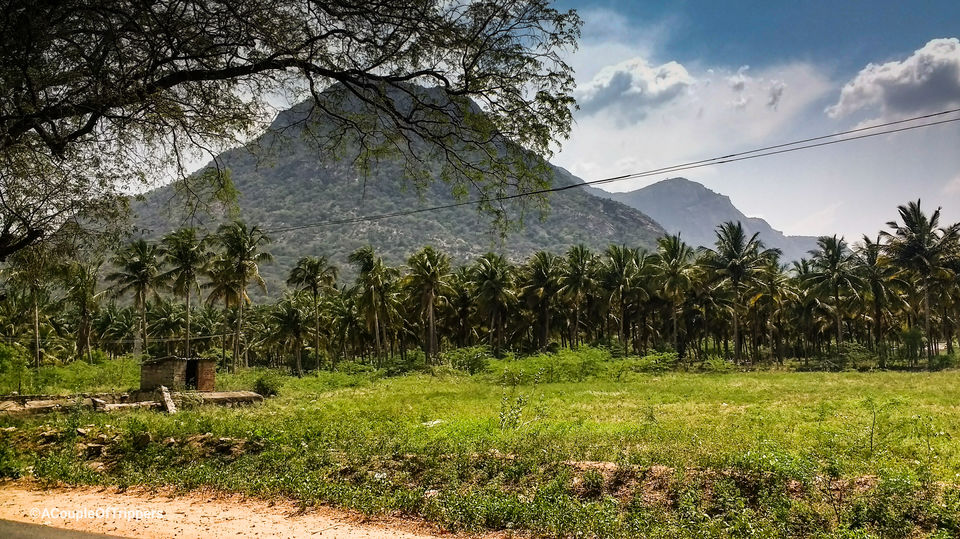 Till Udumalaippettai, the Tamil Nadu heat was boiling us from inside. The moment we entered the Western Ghats section, the view and the soothing temperature gave this travel a whole new meaning. The temperature kept on dropping as we ascended. We started to feel the chill in the weather as soon as we crossed Anamalai and entered Chinnar Forest area. It was already raining heavily in Munnar (some 80 kilometres away) and dark clouds engulfed the distant mountain ranges. Drizzling rain and Cold breeze refreshed our souls as we ascended towards Marayoor.

Taking a breather in the Chinnar Wildlife Sanctuary 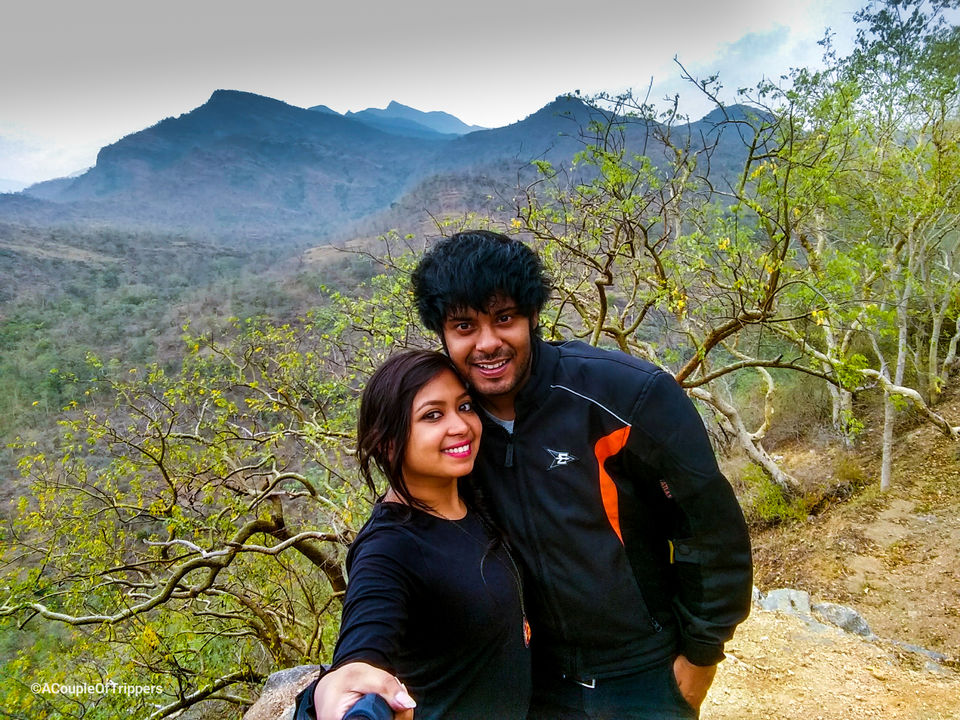 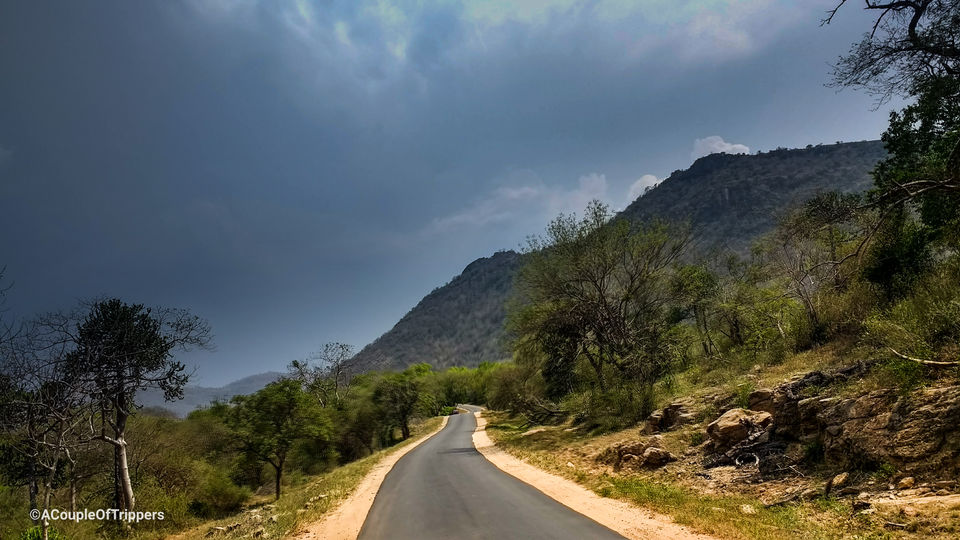 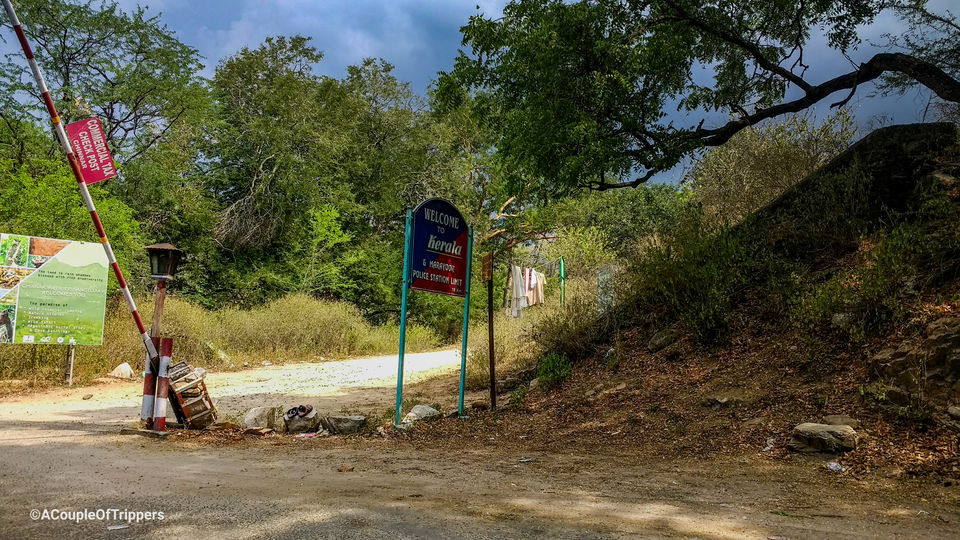 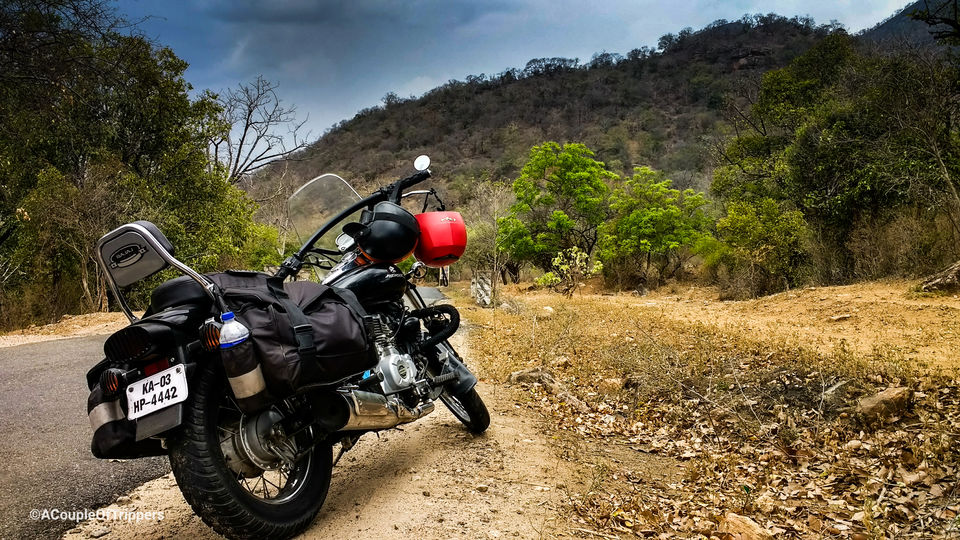 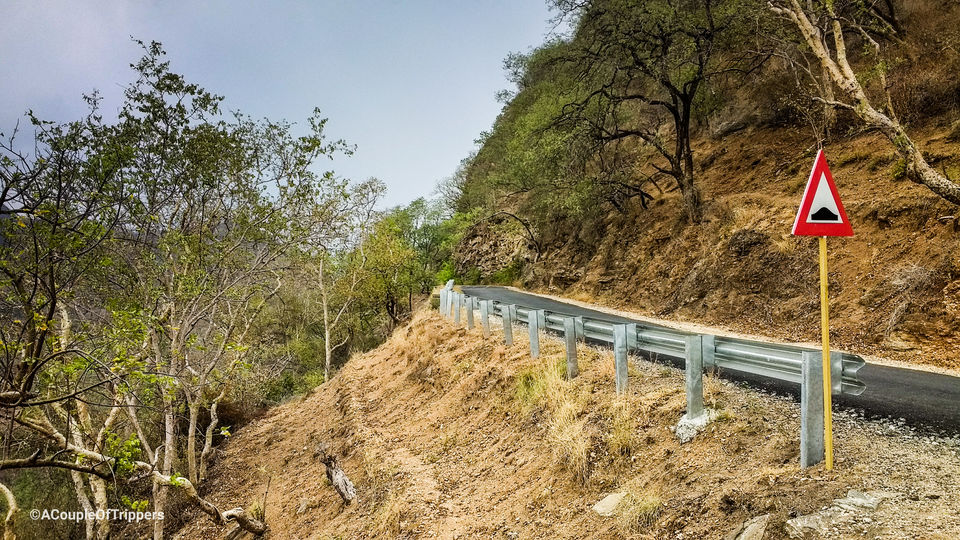 On reaching Marayoor, we checked into Maryur Holidays. After a quick lunch and an intense chat with the owner, we got a DIY symbolic map of the surrounding areas! Sweet, isn't it?

Our very own hand drawn map for the surroundings of Marayoor 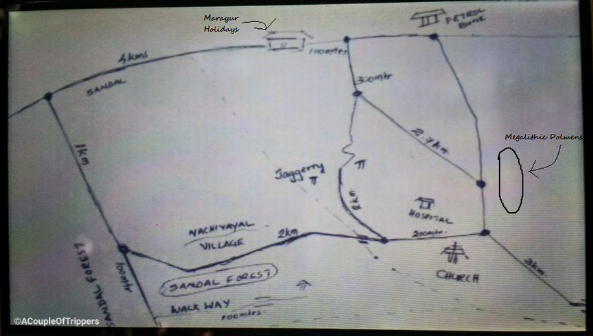 Post lunch, we filled our tanks at the only petrol pump in Marayoor and left for Megalithic Dolmens. There are two roads that lead to the Dolmens. We followed the road opposite to the petrol pump and then took a sharp left at the junction of the two roads, which led us to that hilltop.

There is a board in the main road at the entrance of the small lane. 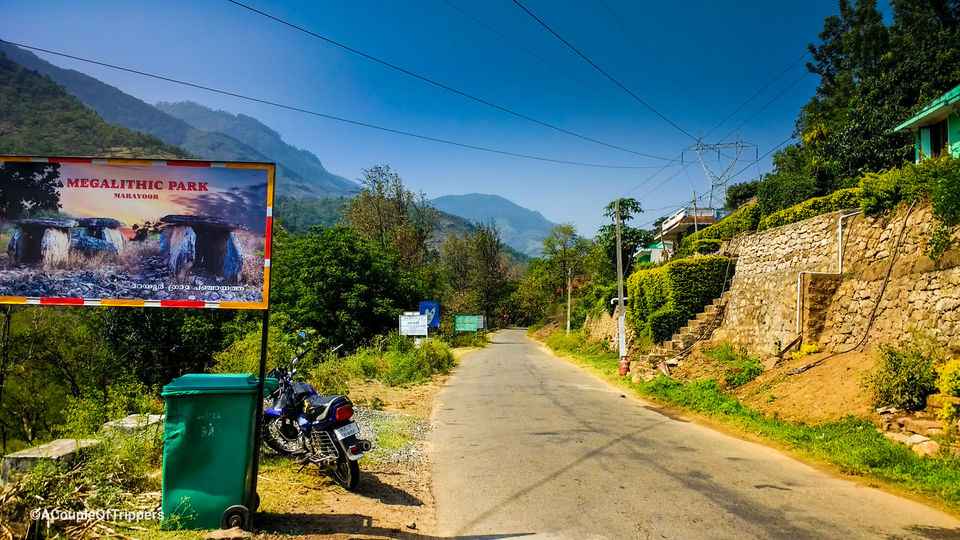 We crossed narrow water bodies (outlets of the Pambar River) on way to Dolmens. 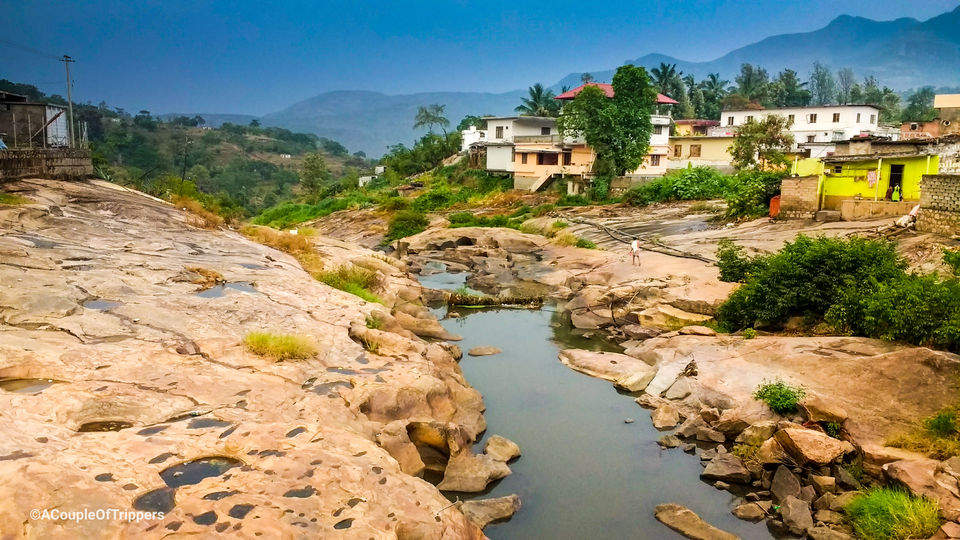 These Dolmens are burial sites which belonged to the Iron age (locally known as Muniyaras). Dolmens are ideally four stones on each side and a fifth capping stone on the top. Upon reaching Dolmens we started looking for a perfect off-track spot where you can actually spend hours without the prying eyes of tourists or in general anybody, with just nature and 'us' for company. We rode to the top of the nearby hill and within a mere 5 minutes we found the perfect spot. 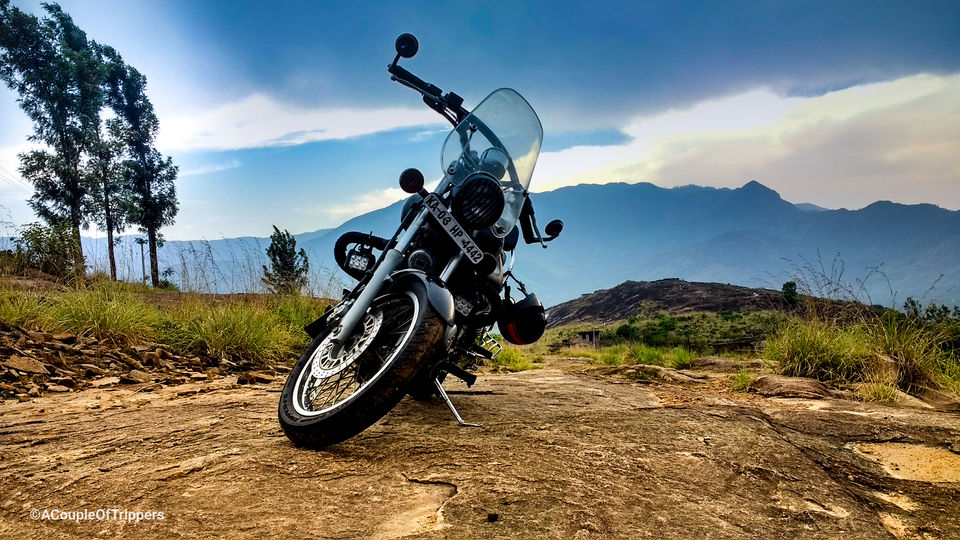 We ended up spending the whole afternoon roaming around that mountain top witnessing a magical sunset between those vast mountain ranges.

Soaking in the amazing view of the village of Marayoor, the mountain ranges and the small pin points of the tourists on the actual Dolmens 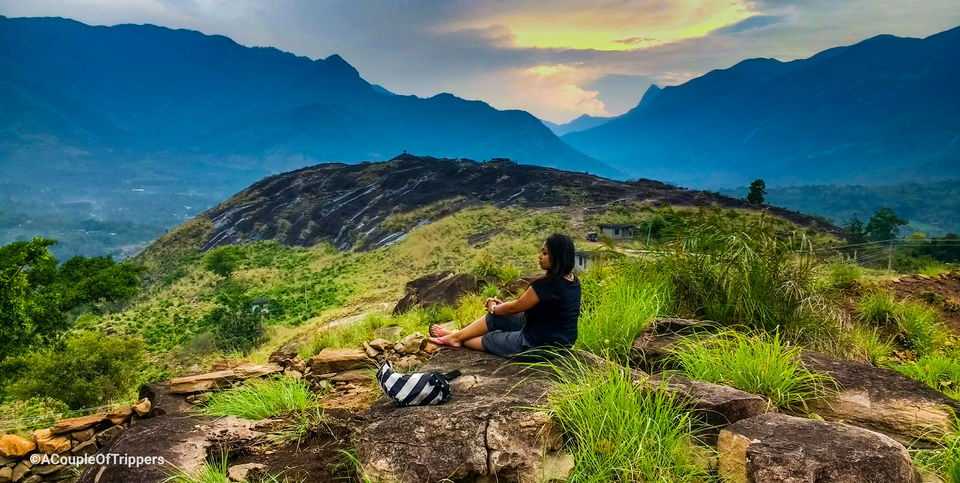 The majestic sunset at Marayoor 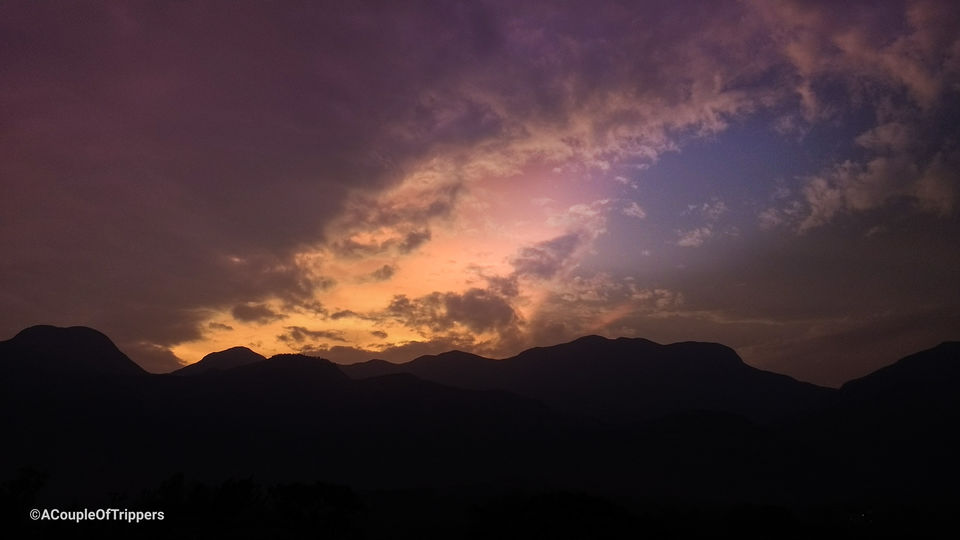 Post dinner, we took a short ride around Marayoor. Night rides are the only time where you can actually get the feel of the place without unnecessary hindrance. We passed a bright church that stood tall in the heart of Marayoor.

Early morning next day, we explored the aromatic Karayur Sandalwood Reserve. Reaching the Sandalwood forests was a 4 kilometer ride from the Marayoor Holidays.

The silence and the aroma which prevailed at the Sandal Wood forest was magical and an absolute treat to our souls. With the birds chirping and the wind whispering melody through the trees, producing a muffled sound against the leaves, there was nothing better one could expect. 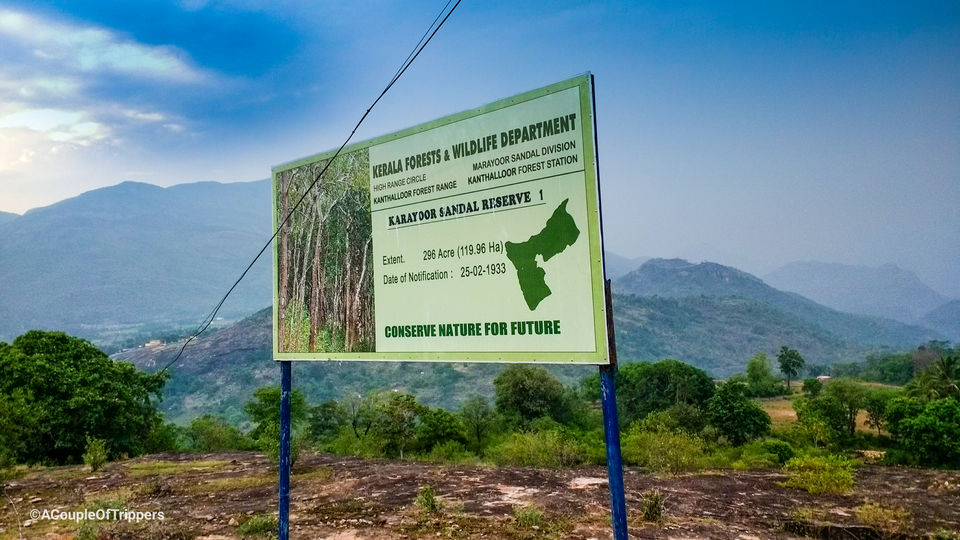 Later that day we continued our remaining journey towards Munnar! 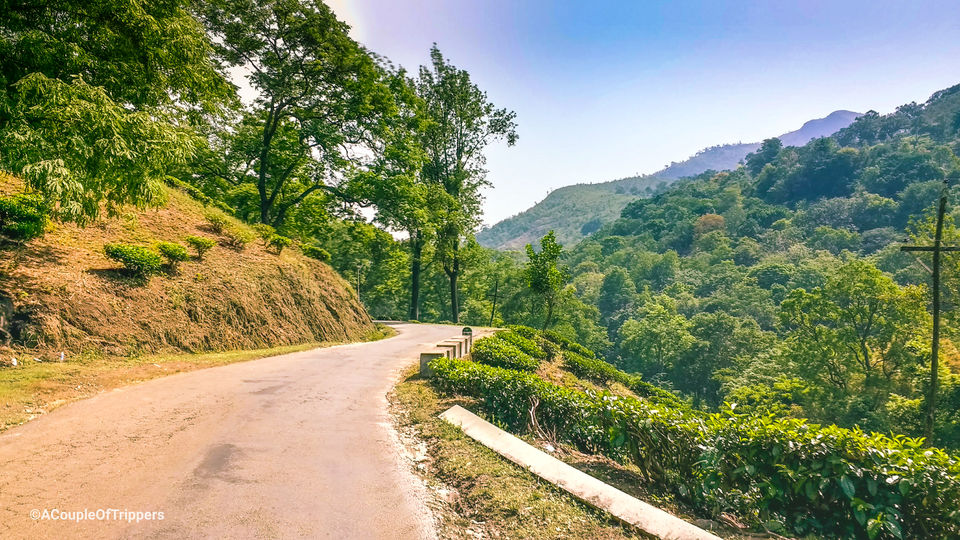 The road to Munnar was a different story altogether! Flanked by lush green tea estates, it gives off a heavenly feeling to ride through the endless greenery on all sides. 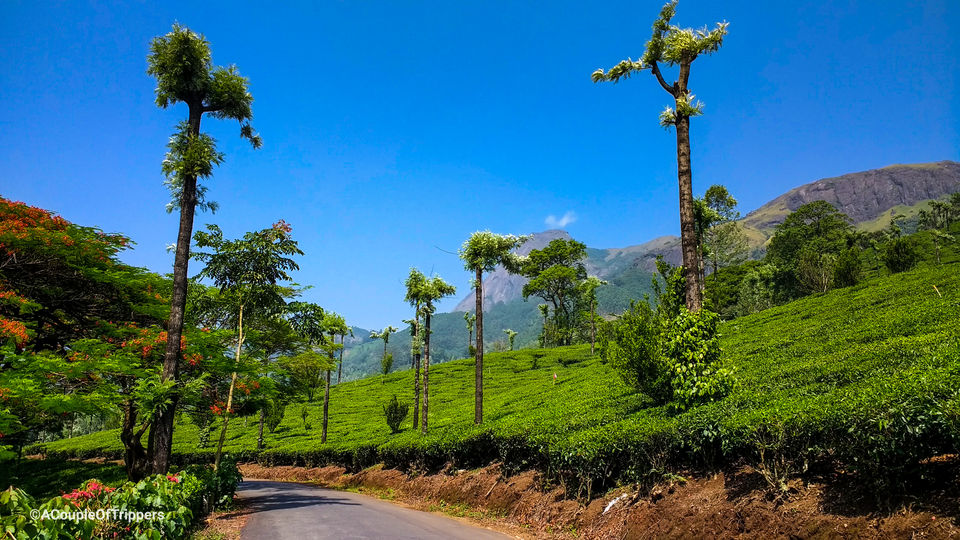 About 16kms from Marayoor, the Lakkam waterfalls is set amidst the rolling hills and it majestically cascades to the Eravikulam plateau. 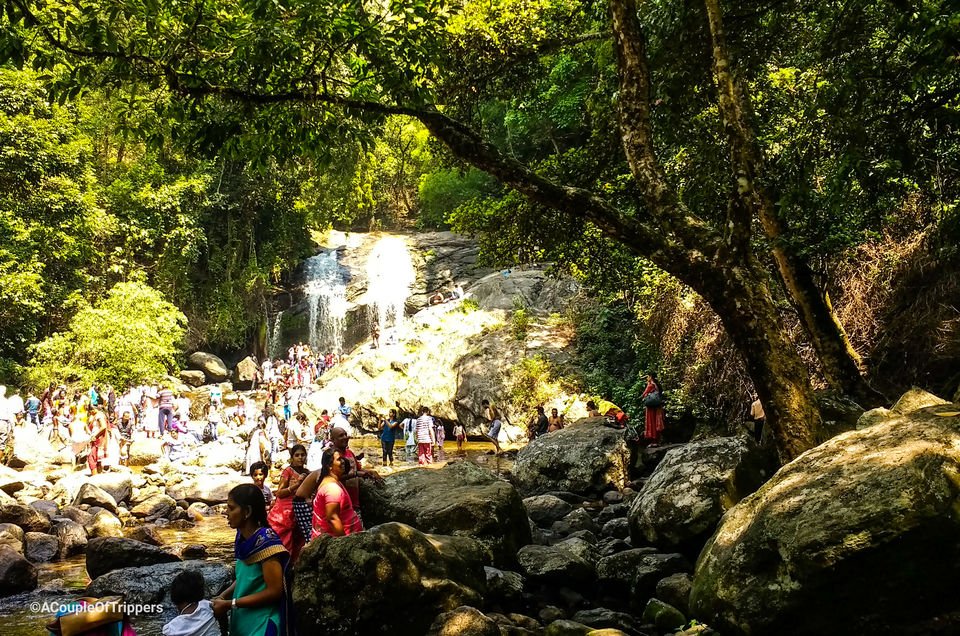 There were few other spots on the way which you could try - Kannan Devan Hills and its beautiful rolling tea estates, the Eravikulam National Park which is home to the Nilgiri Tahr and from where you can see the Anamudi peak (highest peak of the western ghats).

Upon reaching Munnar, we went straight to Chithirapuram and checked in to Athens Cottage (12kms from Munnar). After dumping our saddles and freshening up a bit, we left for a ride to Devikulam. Since Munnar is a buzzing city (also it being Sunday), Devikulam was the safest option for spending the whole day. The tea estates looks like a velvet lawn from afar. 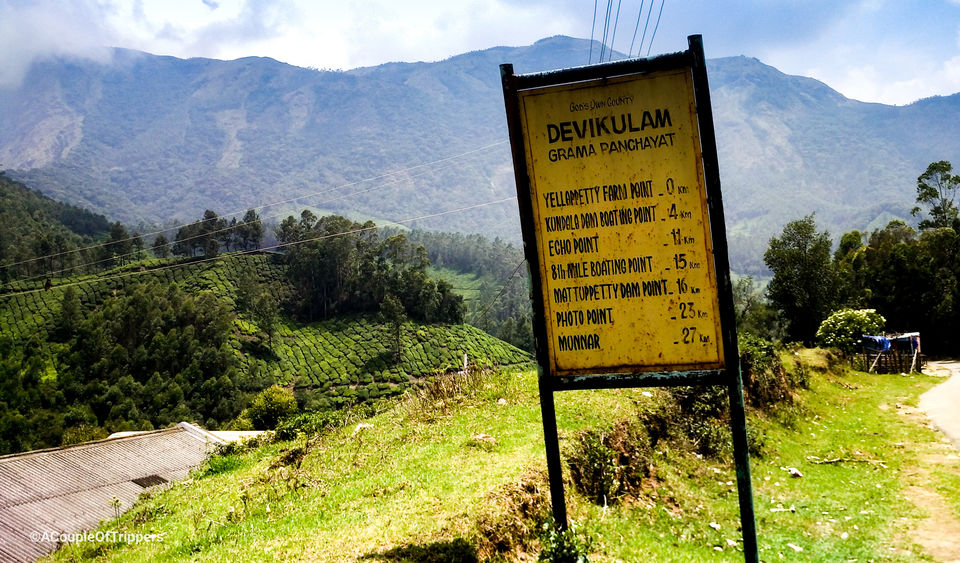 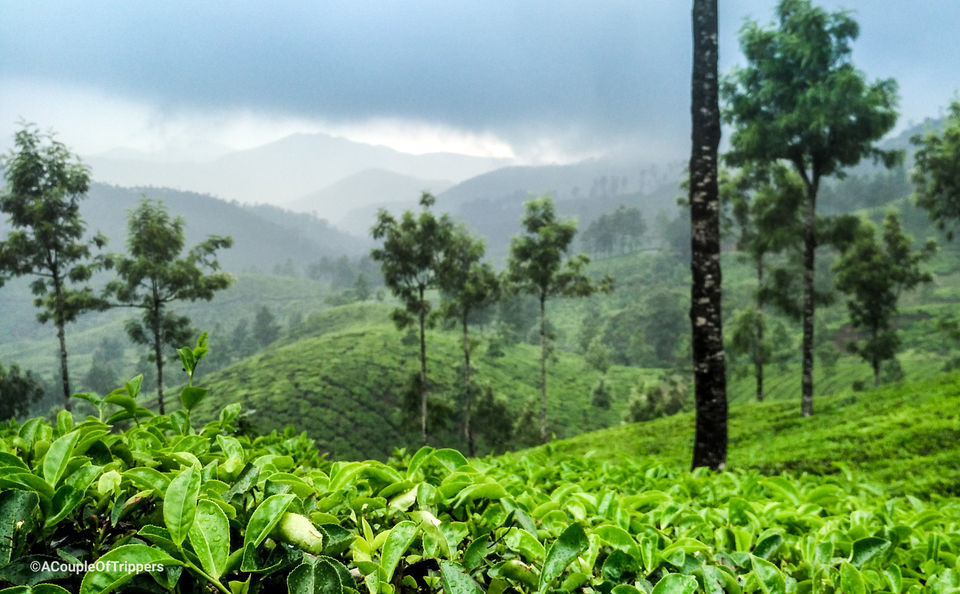 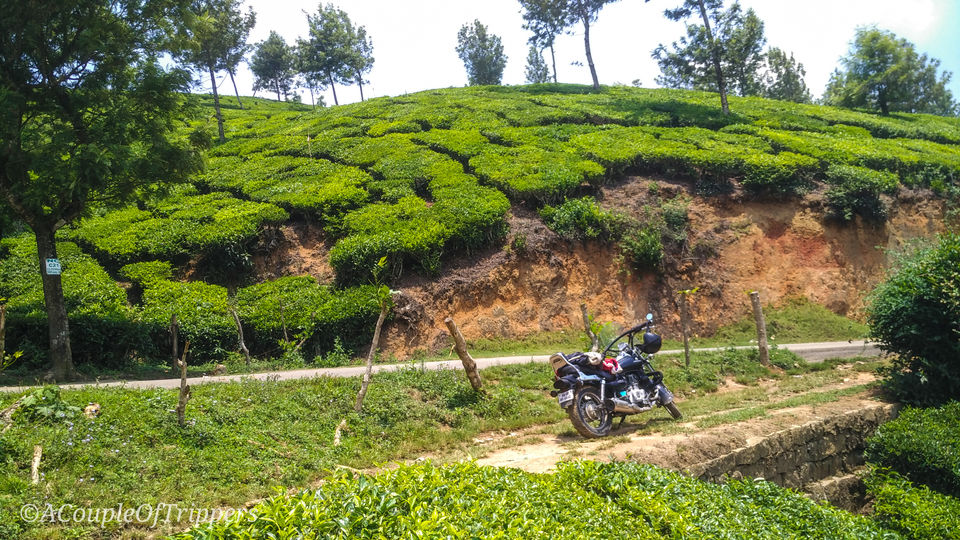 The next day's agenda was Mattupetty Dam, but we got stuck in Munnar city for a couple of hours due to the regular downpours that occur from 2-4 pm almost everyday during the season. As the weather cleared up a bit (although it never stopped drizzling), we rode towards Mattupetty Dam. By the time we reached Echo Point (8 kilometres from the Dam), we were completely soaked up. It was getting dark, so we had to head back to Munnar. I can tell you that in spite of few hitches, the ride was well worth it!

We again planned for Mattupetty Dam starting early morning. It was a refreshing view, totally different from whatever we had seen earlier. The early morning ride with fresh mountain air was soothing to our souls. 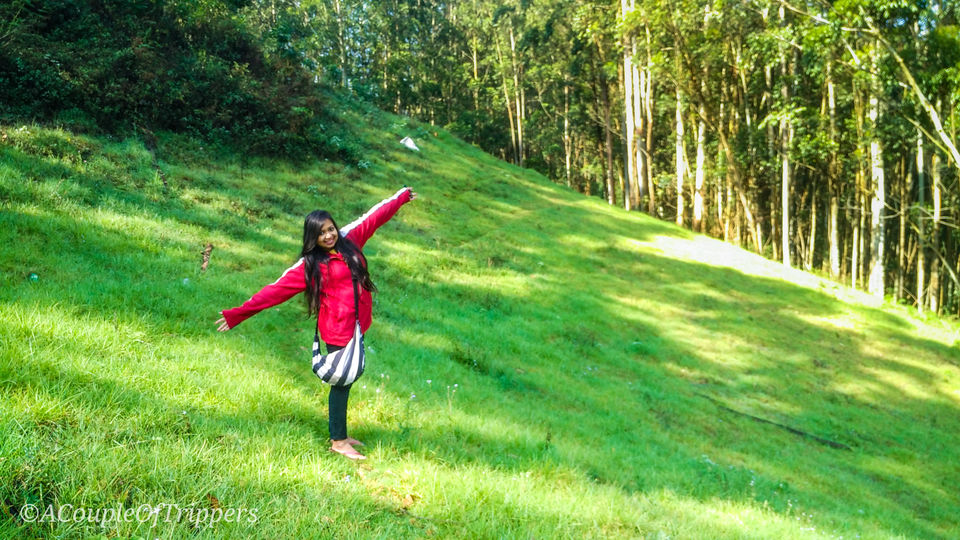 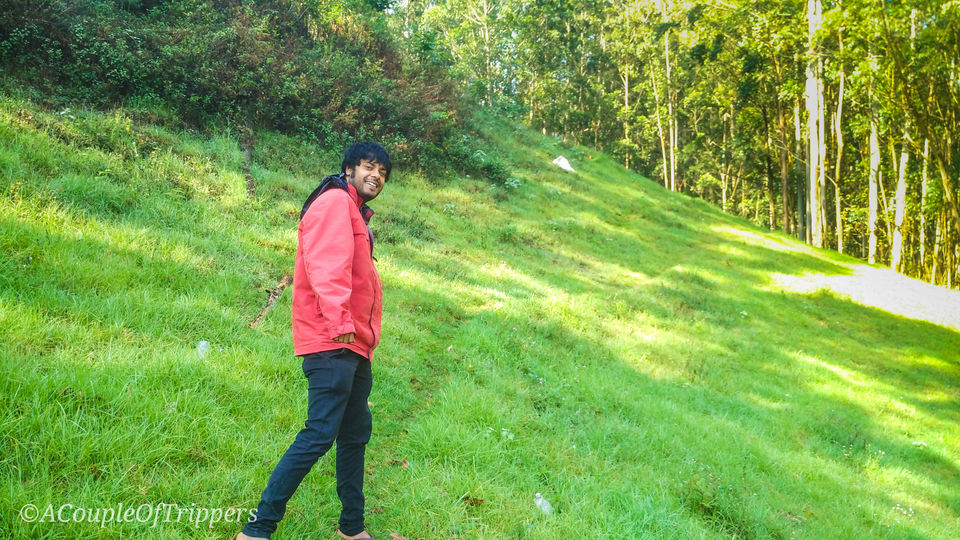 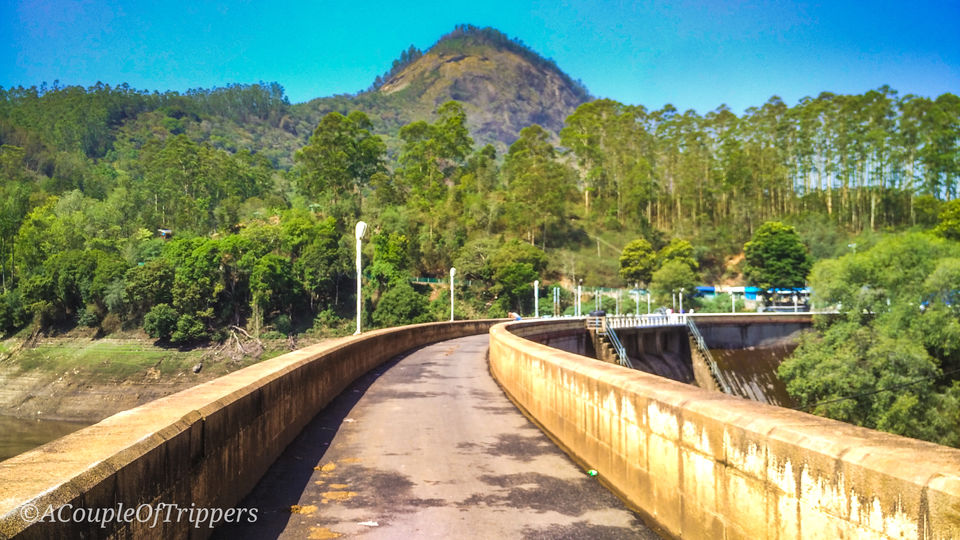 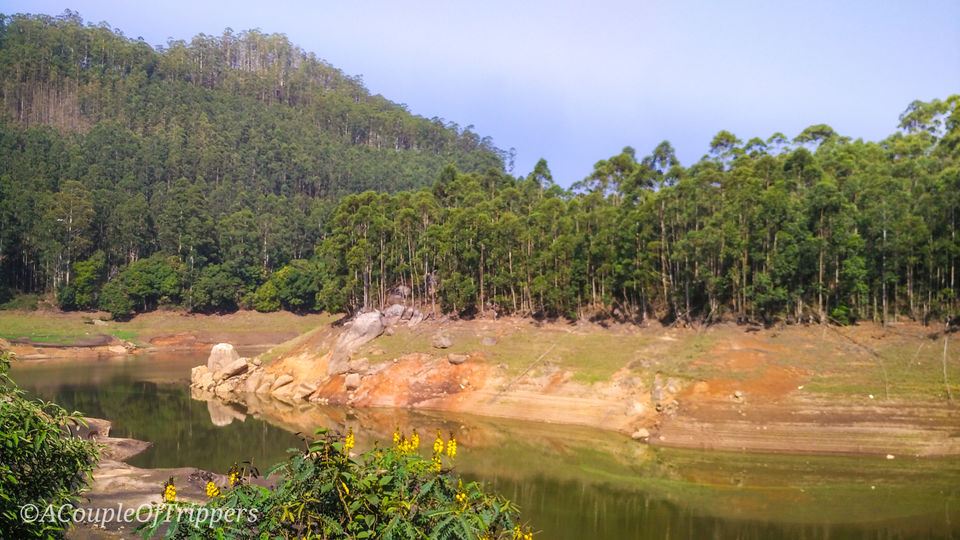 The best view we got was on the road towards Top Station from Kundla lake. There was a different beauty to the tea estates (later we got to know, the tea estates on the way to Top station is one of the highest in the world!!).

The View from Top Station Munnar 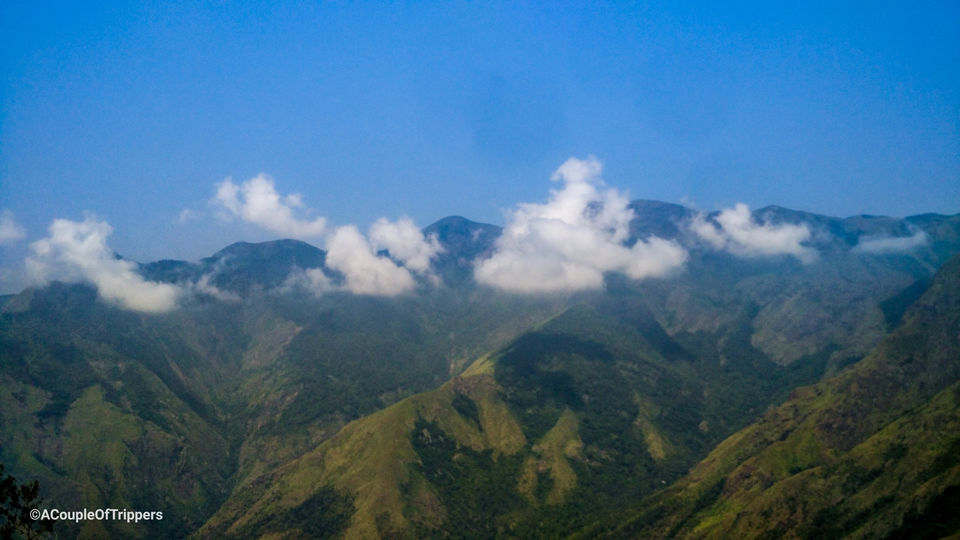 While returning from Top Station we came across a secluded niche. As we were already carrying some items for on-the-go picnic,we put up a small camp on that niche and spent a lovely afternoon rolling on the grass, surrounded by the lush green tea estates. 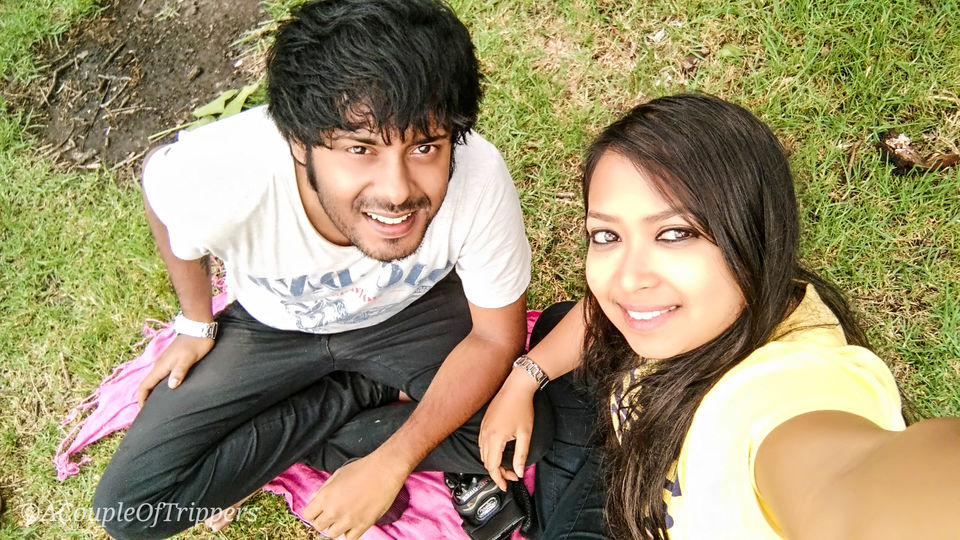 With a memorable ending to the trip, we made our way back towards Bangalore along with a bag full of memories - because every picture will have a story to tell.

Bring back nothing, but memories! 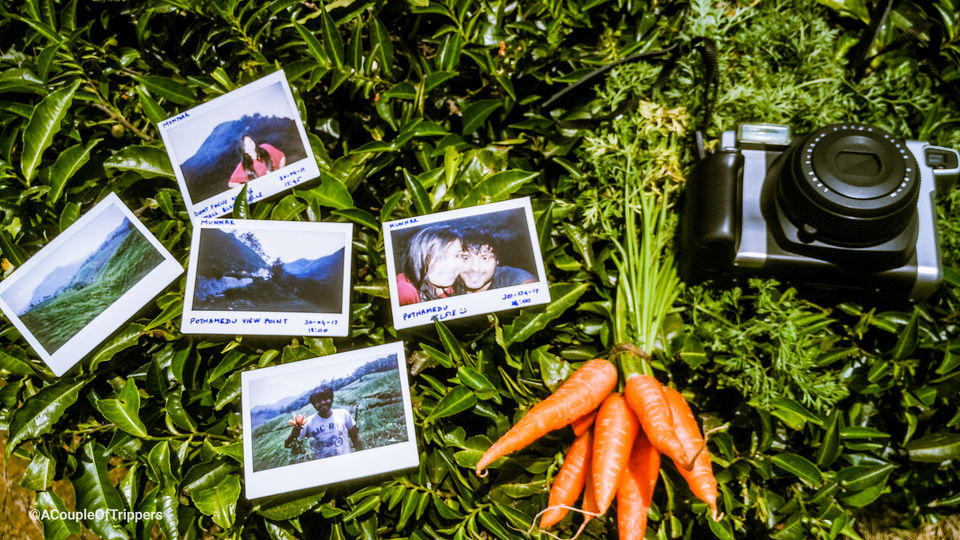