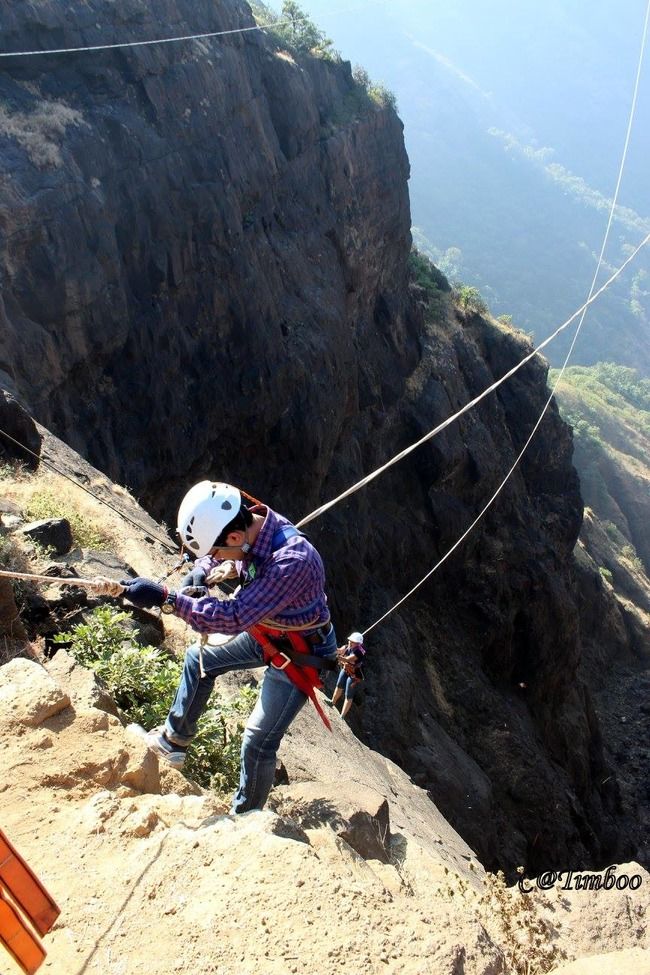 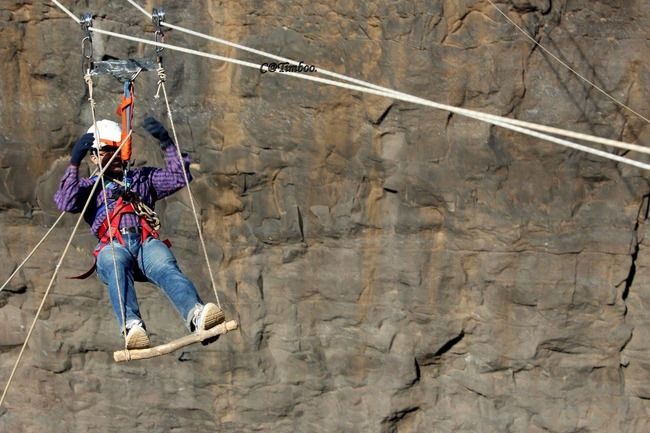 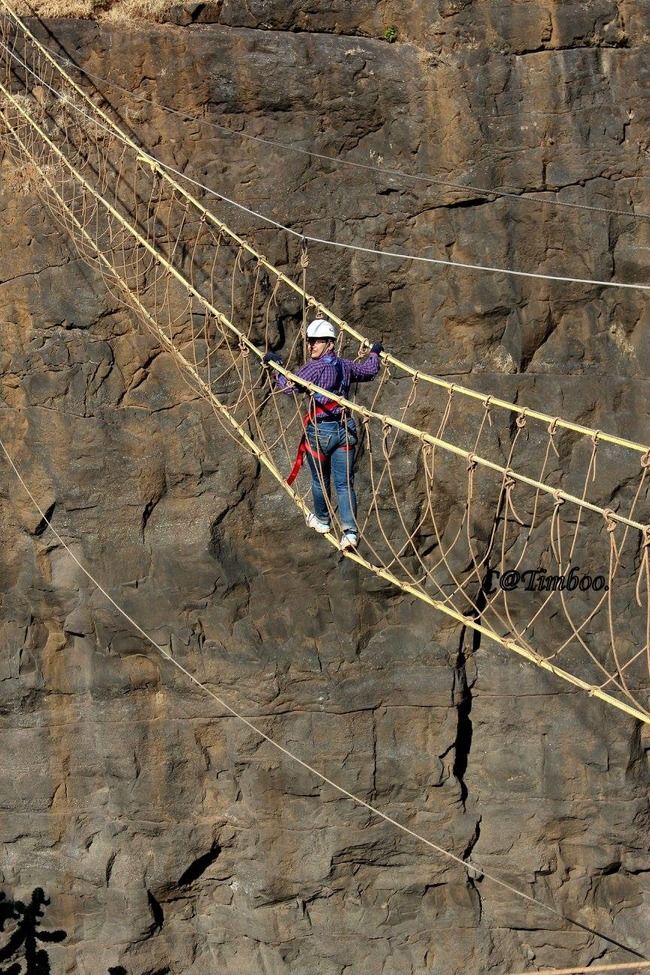 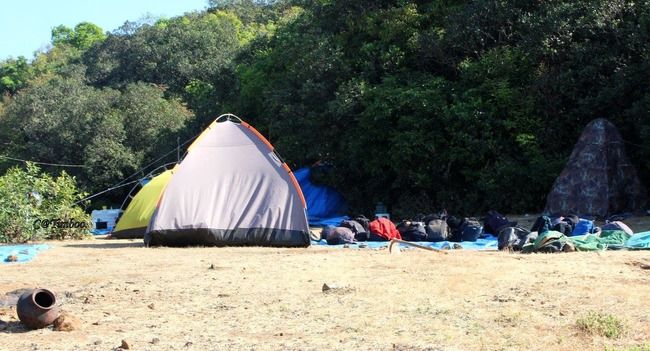 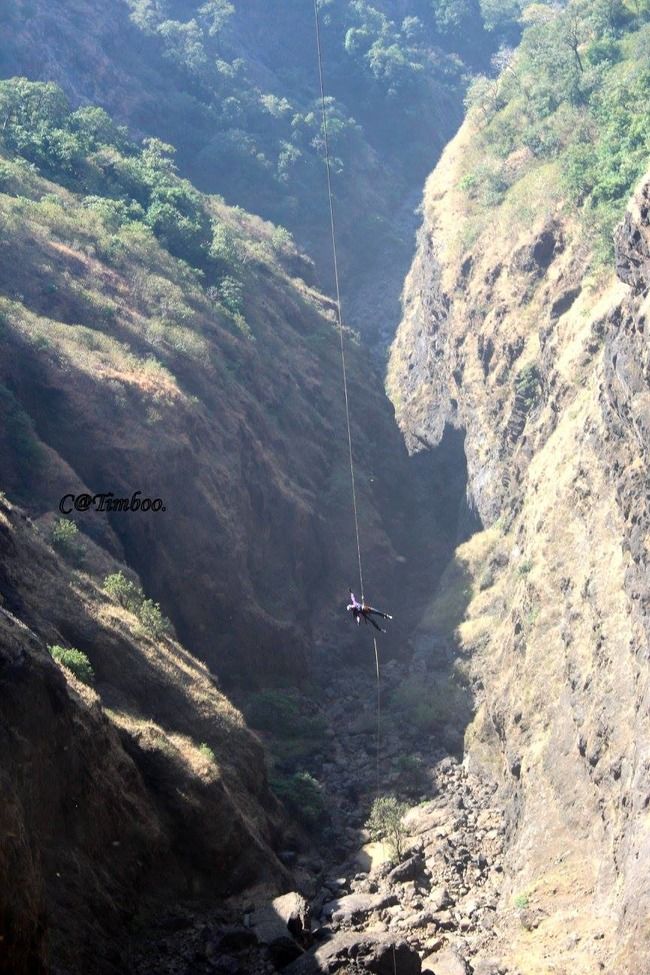 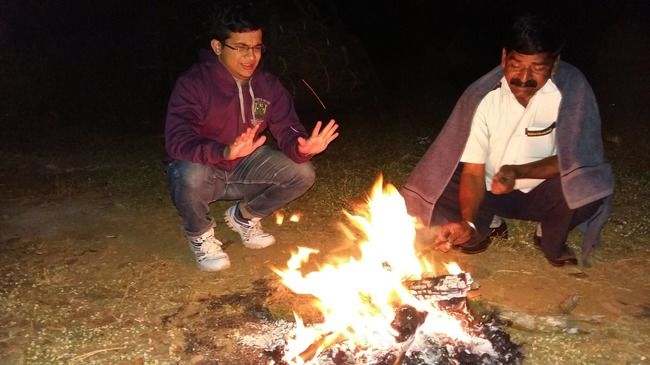 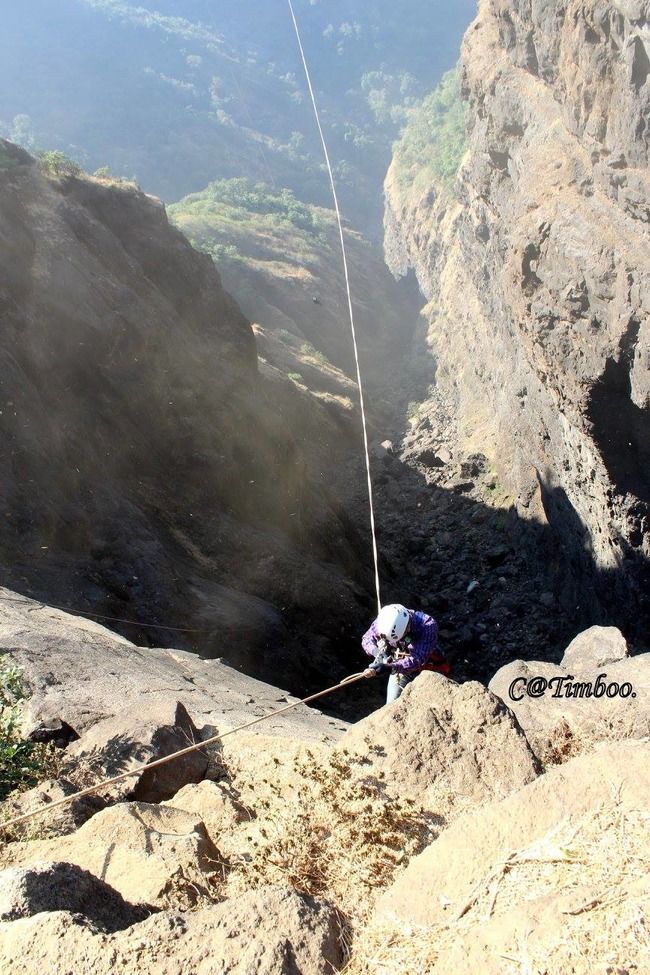 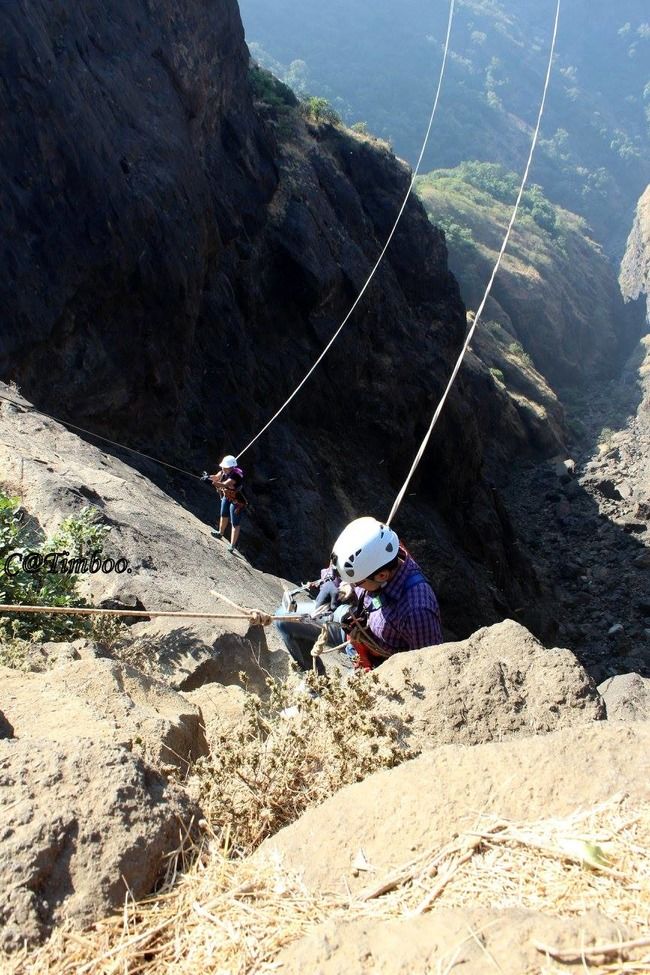 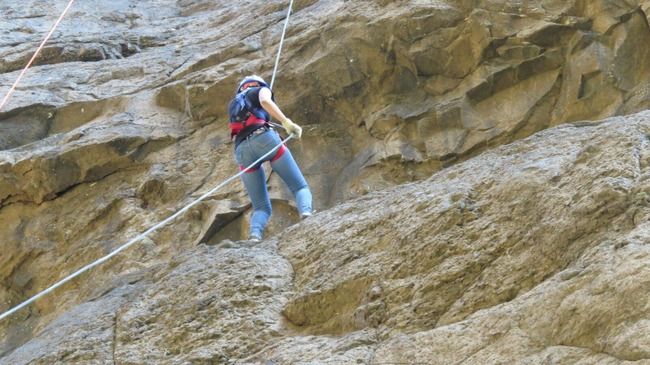 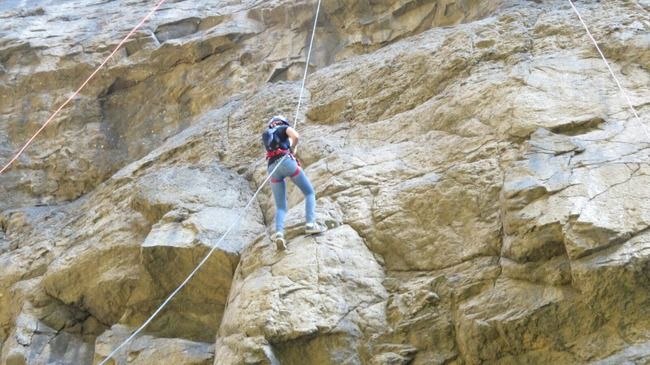 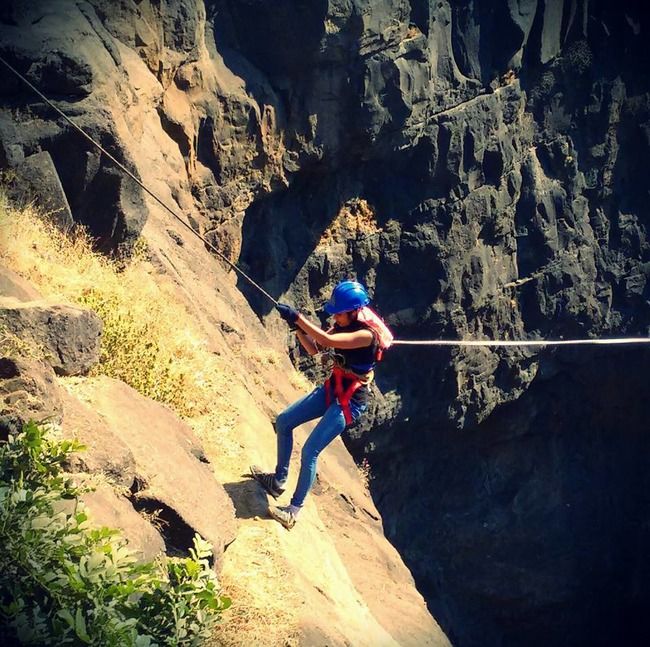 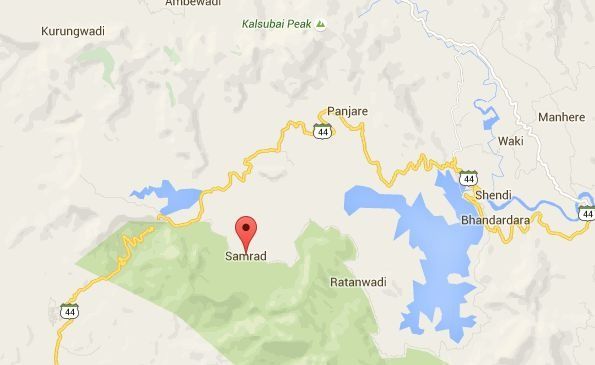 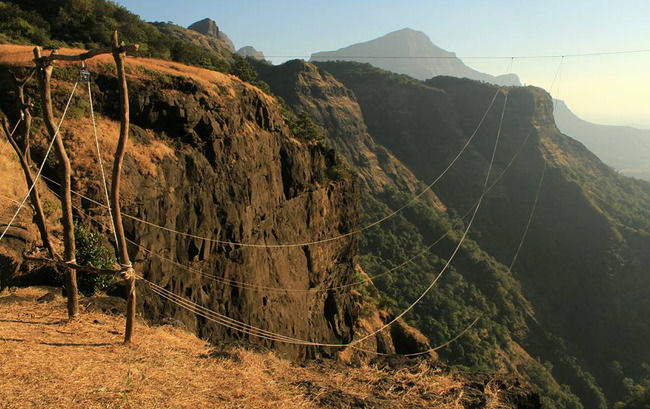 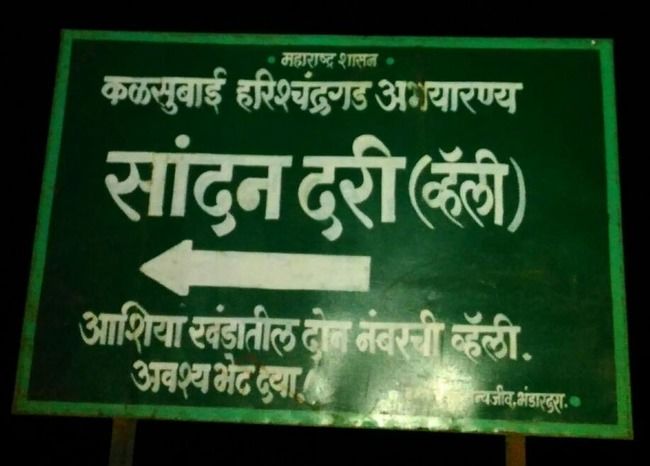 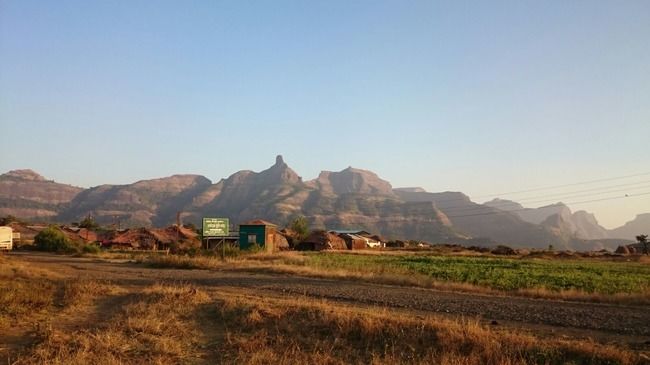 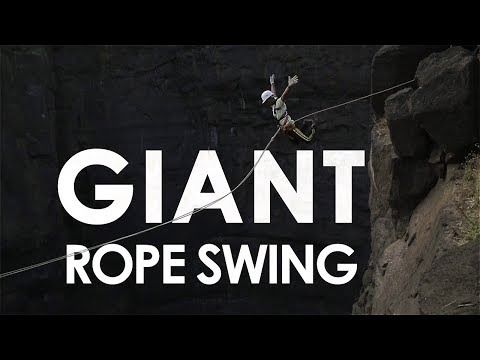 Hello Friends...Life is all about overcoming fears. We all have always heard 'If you want to enjoy life start taking some risks and go on with some thrilling experiences'. I always wanted to take some leap out of the routine and carry out such an adventurous event in life and I heard of this event 'Giant Swing in the Sandhan Valley'. When I read about this first I was very sure I am going to do it.

The Event is carried out in SANDHAN Valley also known as Valley Of Shadows as the major portion of the valley doesn’t allow the sun rays to come in, it is a beautiful place situated in the Western Ghats amidst the water carved valley of 50 to 500 feet deep and around one & half km long. It is situated to the west of Bhandardara Lake, near Samradh village, Maharashtra, India.

The Giant Swing event consists of 4 thrilling and breathtaking tasks

It is carried out every year in the month of November-December by the Proboscis Training & Adventures Pvt. Ltd. The duration is a single day. They carry out the event for four batches. The registration process begins by the month of September. This year the event fees where Rs. 3650. The things included in this were all the four events with all the necessary equipment travel from Mumbai / Pune to and fro the destination by bus, breakfast, tea and lunch. I got in touch with one of the organizers Mrs.Shweta Bhuwad Puranik and completed with the registration process. I transferred registration amount to the said account for the and booked for 27th of December.

After the registration was done I thought if let’s check if there is some video of the event on Youtube and found this https://www.youtube.com/watch?v=aQ0ChoivaK4 and once I went through the video it just made me frightened. But then I had done the registration and was going to do it.

I had also done the registration for two of my friends, Trimbak Dongre and Shree Deo. As per plan we had to board the bus from Teen Hath Naka, Thane on 26th of December. The journey began and we got introduced to the other members. We reached the base village Samrad at about 3:45 at dawn.

It was freezing cold. The temperature had dropped to about 12-13°C. Due to such climatic conditions no one was willing to come out of the bus. I and Shree we decided to go around and have a look at the village. There were other enthusiasts who had come from Pune. Their bus driver had lit a small camp fire.

We came through a Maruti Temple in the village and decided to take rest there. Then at about 6:30 a.m. in the one of the organizers came and showed us way to a bore well. At about 7:30 am we all were ready and started the walk to the base camp site. It took about half an hour to reach the place. Once we reached we did the final payments, and also took the photography and video package for the event. Then we had breakfast of khichadi and tea.

Once all this was done we were given the equipment we were to use while performing all the activities. It included helmet and harness. The organizers gave us the general instructions and informing us about all the four events and simultaneously the harness was tied properly. We were divided into groups and sent to different events in batches.

The sequence I followed was The Burma Bridge, Flying Fox, Giant Swing and at the end Rappelling.

A. The Burma Bridge

In this event a bridge of ropes was created across the valley of about 200 feet and we had to walk and cross the valley. The three of us were ready. I was the first and the instructor tied the support string to my harness and asked me to walk on the knots on the walking rope and to keep my elbows inside. At the beginning it was all okay but as I made my way to the middle of the valley it was all scary as whenever I had a look to put my steps on the knots I simultaneously would look at the 1000 feet deep valley But I was half way and there was no turning back.As I reached the other side of the valley due to the wind and a fearful walk my throat went dry. The next event was the flying fox

B. The Flying Fox

This event was quite easy. The instructor tied the support and asked me to keep my legs on a wooden stick. I had to use the harness tied to my body as a seat and just enjoy the ride from one end to the other of the valley. When I was all ready to go, the instructor left the string and in no time the ride was done and I was on the other side. This time there was not fear and I just enjoyed the time I was in the air.

And then it was the jewel of all the events, the Giant Swing event. This event the valley is 1000 feet deep, the swing that we go through is of about 500 feet.

The rope was tied to me and the instructor informed that I am supposed to rappel down initially and once I reach the destined spot he will inform me and leave the rope loose. I reached at the spot and he released the string and there was a free fall. I was under the influence of gravity. At the moment the free fall began the feeling was ‘What now’ but within a fraction of a second it went on to aaaa…..aaaaa….. and there I was enjoying the swing, in the middle of nowhere I was swinging. After I was steady and some moments later they started pulling the rope. The rope was attached to car and thus the speed was a lot, as instructed I kept my legs towards the wall and landed on them perfectly, then matching with the pull speed I went up and was standing on my feet again. The experience was awesome.

This was a bonus event or one can say cherry on top. Here we had to carry out rappelling in the valley 325 to 350 feet deep. We went at the location, there were three ropes and three persons were to carry on the event simultaneously. I attached the descender to my harness and was waiting for my turn. The instructor called me and let the rope through the descender. I was in the position to begin the descend. The initial was a bit tough as there was no support and had to balance a lot but later on when my body was at an angle of 90° with the wall it was lot easy, I just needed to feed the rope to the descender and within no time I reached the bottom of the valley. Then we had to walk through the valley to reach the base camp again. The valley was all with rocks of all sizes. The geography of this valley is such that it is covered by walls on both sides which don't let the sun rays don’t reach certain places and there is water all the year round. At one point we had to cross belly deep water. Everyone there was struggling to walk as the stones had become slippery. There was a rope for in the center to which we had to hold on while walking. Then we came to the base camp.

After all the events done we had lunch. The lunch was just awesome with rice bhakri, puranpoli, kheer, vegetable, pulav, salad, papad. After all these events we were all tired and a lot hungry. After having that amazing lunch we got into one of the tents and took rest for some time. Then around 4 -4:15 pm we left the base camp site and reached the Samrad village.Everyone was so tired that all were down and sleeping. Even though the road was bad and the journey was very rough, everyone was having a sound sleep. At around 10 at night we got down at Kalyan - Bhiwandi bypass and then reached Kalyan railway station.

I reached home all tired at about 11 at night, and the journey ended.