By Shutter Stories and Photography 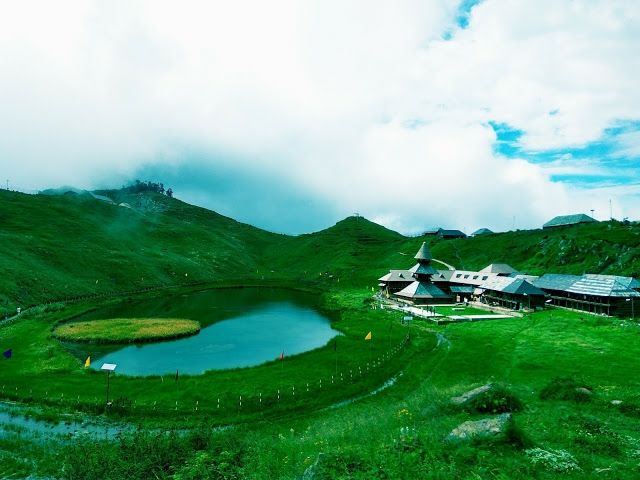 After the Epic Battle of Mahabharata ended, the 5 Pandavas, Draupadi n the mother Kunti along with Deity Kamrunag decided to move to the himalayas to find a place for their teacher. They reached a valley which is 2730m above sea level. Dev Kamrunag liked the place so much that he decide to stay there for the rest of his life. On the teachers request for water, Bheem (one of the pandavas) pushed his elbow n forearms between the valley. Hence it was named Prashar (means a Brahmin Gotra). Locals believe Bheems hands are the reason for its Oval Shape. They also believe that the push for the formation of lake was so strong, that the depth of the lake is unknown. People have witnessed times when one whole huge tree (30m-50m tall) would fall in the lake n disappear.

Gold Coins, Silver Coins, Money extra are thrown now in the lake as an offering to the gods by the local people and the visitors. Its faith that by doing so, our prayers may come true. Therefore, the place is all surrounded by the pictures of gods and saints and even Saint Prashar (also the reason behind the name of the lake and the three stories pagoda near the lake). Pagoda is also well known for having a Rajput as the pujari (priest) of the temple which is said to be a brahmins post. This incident took place when one of the king got unhappy with the pujari n choose a Rajput instead as he was well known for displaying his powers.

Festivals have been the roots of our nation which are followed by setting up fairs (Mela). Since India is known as the country of Festivals n Fairs. There is one festival thats celebrated in Prashar on a large margine and thats Sankranti. Sankranti is a festival celebrated all over India. Its said to be the festival of kites. But its celebrated in a much different ways in Prashar. Pilgrims from around all over the country come all the way to the Himalayas to celebrate this festival n so does many tourists (Indians and Foreigners). The fair n fest starts in Prashar a day before Sankranti, in Ashada thats in the month of June.

Devotees from around the Prashar Village and other near by villages come all the way to the lake with the deities of Sukha Dev. Many also come with other deities and a Rath Yatra (Chariot Riding with ideals of the Gods) to the Lake to enjoy the Fest n Fair.

Since we have people flowing in from all over the country. It becomes a good source of earning for the localities. Hence we can see Food Stalls, Stalls for the souvenirs, Toys, Hand Made Jewels etc are set up. We also see fun rides like the Ferris Wheel, Mari-go-round and other games for the kids and visitors put up which serves as a leisurous time for the tourists n a good way to earn for the people of Prashar.

As the light of the nature start to dim, we can see several tents been dugged by the visitors. There are also other options for the tourists to stay out of which staying at temple Dharmashala could be one or forest rest houses could also be booked to stay.

One of the 8 Indian Institutes of Technology, it is located in Kamand, Mandi. It is build along the River Uhl. It is established by the Ministry of Human Resources Developement. Timothy A. Gonsalves joined on 15th January 2010 as its First Director. R. C. Sawhney joined along as the registrar of the institute. The permanent campus of the institute is situated at 15kms from the mesmerising city of Mandi. Programs such as B. Tech, M.S., Ph. D. etc are taught here along with several others. The very first foundation of the institute was placed back on 24th Febuary 2009 n was registered as a society on 20th June 2009 in Uttarakhand followed with starting of the first year classes in July 2009. A large land of about 565 acres was alloted for the set up the institute by the government of Himachal Pradesh.

Being one of India's most historic Mythological town, Mandi has more then 300 temples which includes the old ones and the new. With these large numbers of temples, its also called as Chotti (Small) Kaashi. The Archeological Survey of India has declared "Protected Monuments" to some temples due to historical Significance which includes some temples of Lord Shiva and Goddess Kali out of the many as most of the temples are of Shiva and Kali. Mandi also has an interesting history which includes the Princess Of The Well, Mandarava, The Princess of Sahor(Mandi). After she became the confort of Padmasambhava, the King burnt himself and the princess out of anger. After a long 7days rage, there was a lake with a Lotus in it. That lake later named as "Rewalsar" or Tso Pema (Lotus Lake).

The people of Mandi did no compromise in welcoming Guru Gobind Sikh (10th Sikh Guru) with all the warmth. Hence there is also a historic Gurudwara honoured to him after he spent some time in Mandi. He was also supported by the people in his war against the Mughal Emporer Aurangzeb.

India being the land of cultures and religions. Mandi also has a 2 Mosques out of which one is on Jail Road and the other at Ramnagar. According to the muslim rituals n believe, both the mosgues offer Namaz of all 5 times, Namaz-E-Juma and Namaz-E-Eid.