At the mouth of India highest plunge waterfall 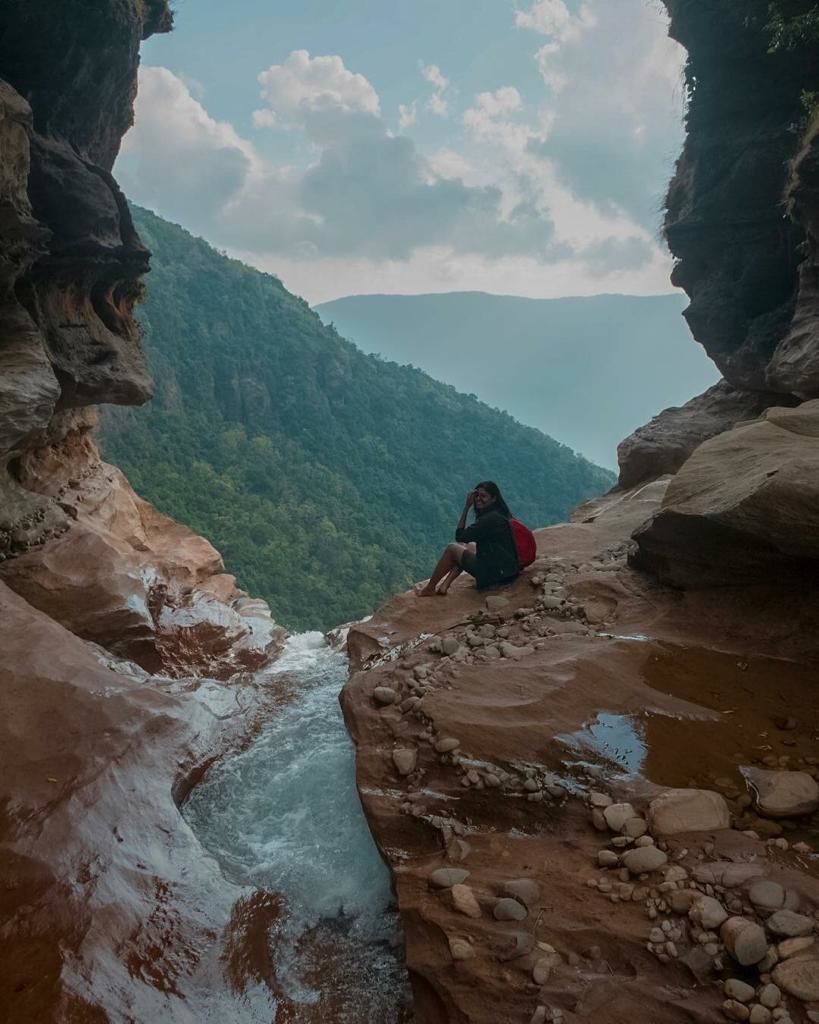 My story to the top of Nohkalikai falls -

If you like adventure and want a thrilling experience, then walking to the mouth of panoramic Nohkalikai falls in Sohra, Meghalaya should be on your to-do list.

It involves walking across open grass fields, descending a hill covered with green forests and jumping over boulders. You will be accompanied by clear streams flowing along a fossil covered river bed. With natural turquoise water pools throughout the route, what awaits you at the end is a breathtaking view of India's highest plunge waterfall. 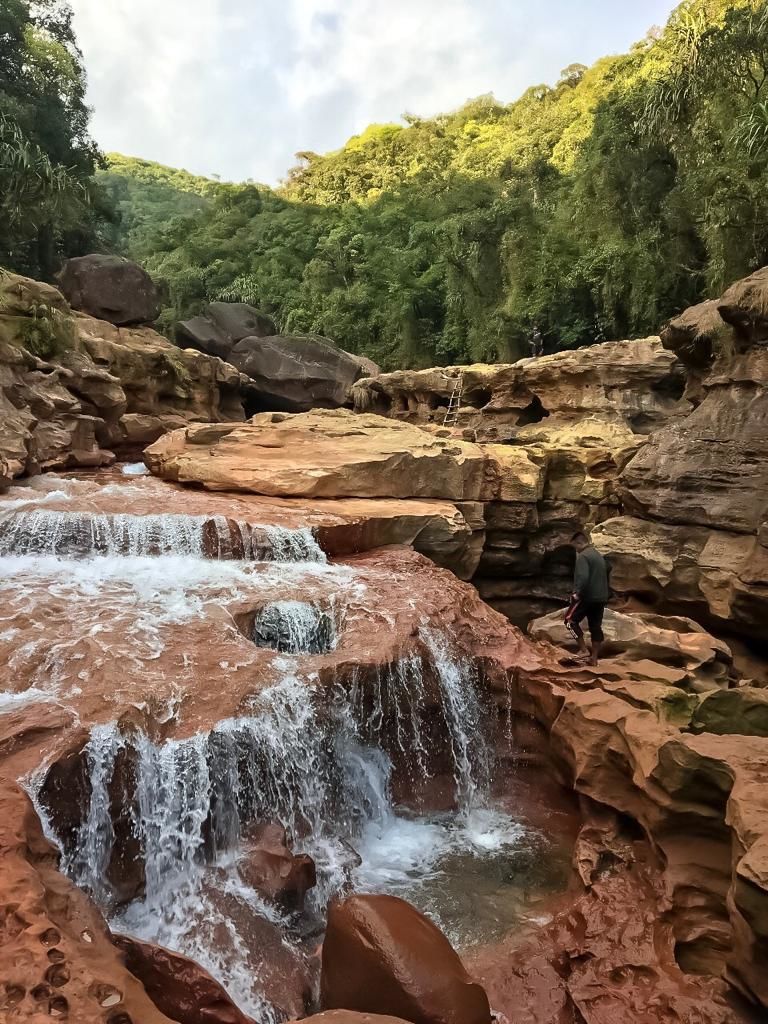 How I ended at the top of Nohkalikai falls-

It was a coincidence that instead of seeing Nohkalikai falls from the viewpoint, I ended up at beautiful Tlai falls and the bonus was an awe-inspiring view from top of the Nohkalikai .

When I visited the Nohkalikai falls, the entire area was hidden under dense clouds and the waterfall was not going to be visible for a while.

I had seen a photograph of Tlai waterfall at the ticketing counter of Nohkalikai on my way in and decided to inquire about it. 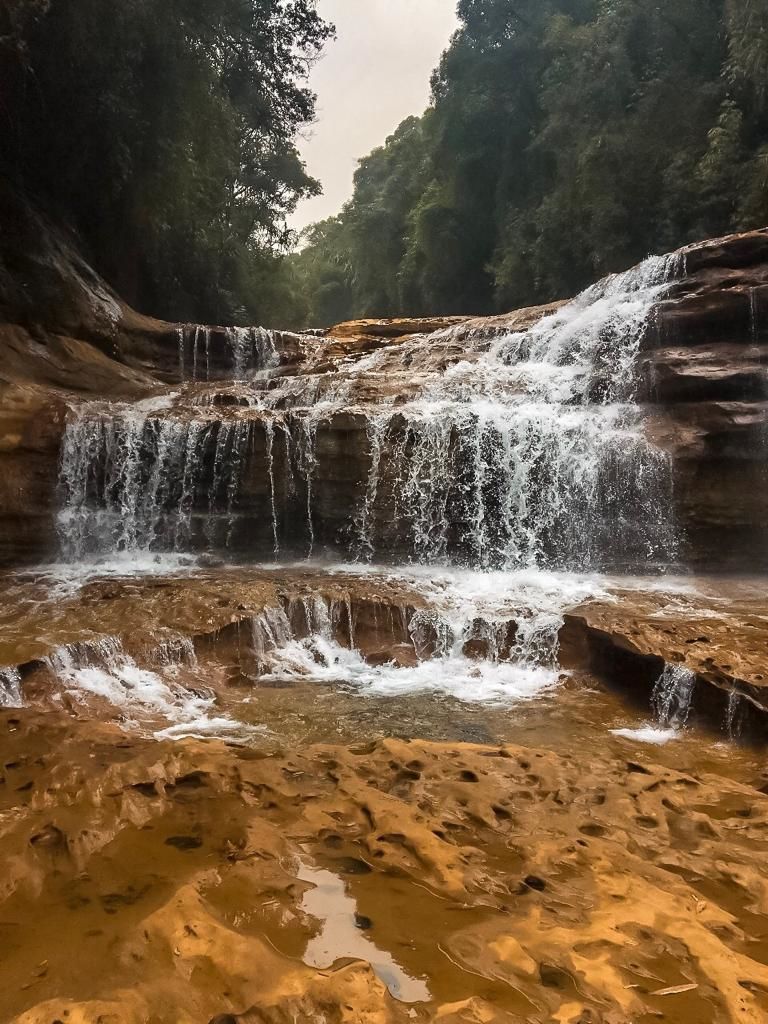 Tlai is a splendid three-tier waterfall with green forest presenting a beautiful backdrop.I found it quite picturesque and decided to go ; hoping the cloud cover over Nohkalikai to lift by that time.

I was pointed towards the direction of these falls by the Nohkalikai ticket counter people. I reached a dilapidated board and found a guy who was issuing an entry ticket for visiting Tlai. This guy was pretty laid back and asked me and my travel partner to come along with him to the waterfall if we wanted to.

I was slightly hesitant but the desire to see Tlai waterfall was overpowering and I decided to go.

The half-hour walk to Tlai falls takes you through a complete change of landscape.

The journey starts with a short walk in a grass field followed by descending a hill. You have arrows pointing towards the right direction as it's easy to miss the point from where you have to go downhill. 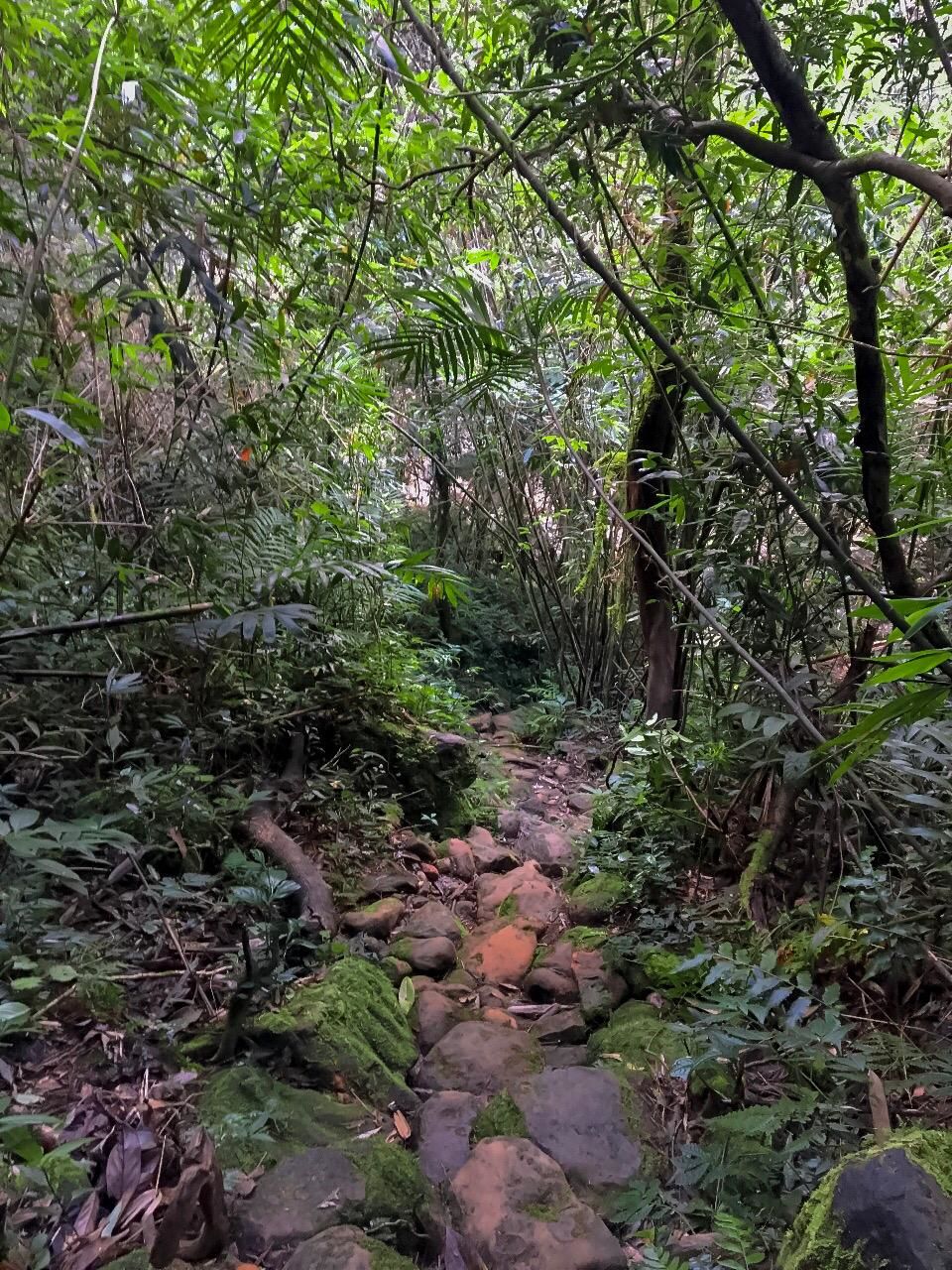 This side of the hill didn't seem to get much of sunshine. The soil was quite wet while the tree trunks and stones were covered with moss. This moss makes the stones slippery hence one has to carefully step on them.

At the bottom of the hill, you have the river bed covered with huge boulders and rocks. You have to jump over these to reach the Tlai waterfall which explains the reason behind fewer tourists at this place.

Tlai falls might not be well known to the tourists but locals seemed to come here quite often for the view. 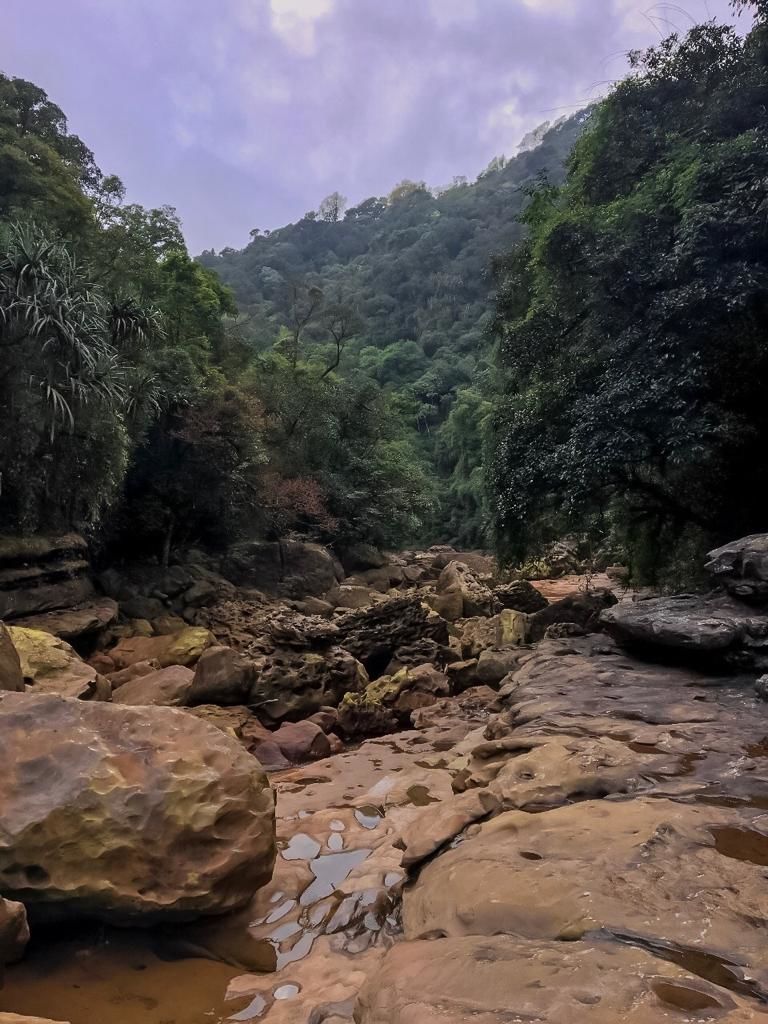 Way to the top of Nohkalikai Falls-

From Tlai waterfall you have to walk 45-60 min on the river bed to reach the mouth of Nohkalikai. Along the route, you will come across a number of fossils embedded upon the rocks. I couldn't get much information but the fossils are said to be around 70 million years old * 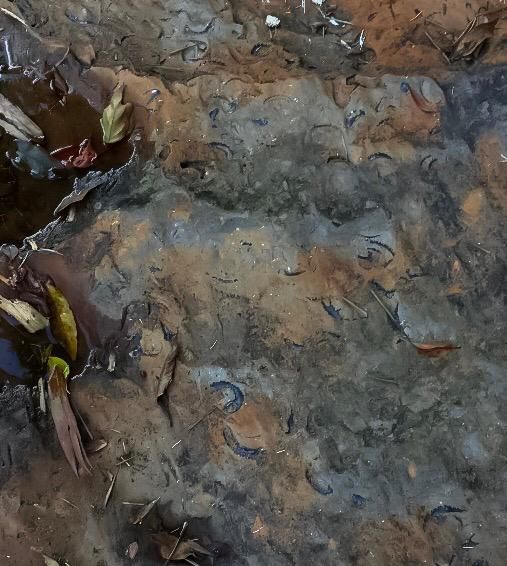 Over the years the constant flow of water through the gaps on the river bed has created a number of pools and waterfalls which eventually plunge down the gorge to make the Nohkalikai fall.

All along the ravine, you will see hollow caves formed by the high force of water during monsoons. These caves are visible during the dry season when you go to the top of Nohkalikai.

Caves along the ravine ,en route top of Nokhalikai Falls 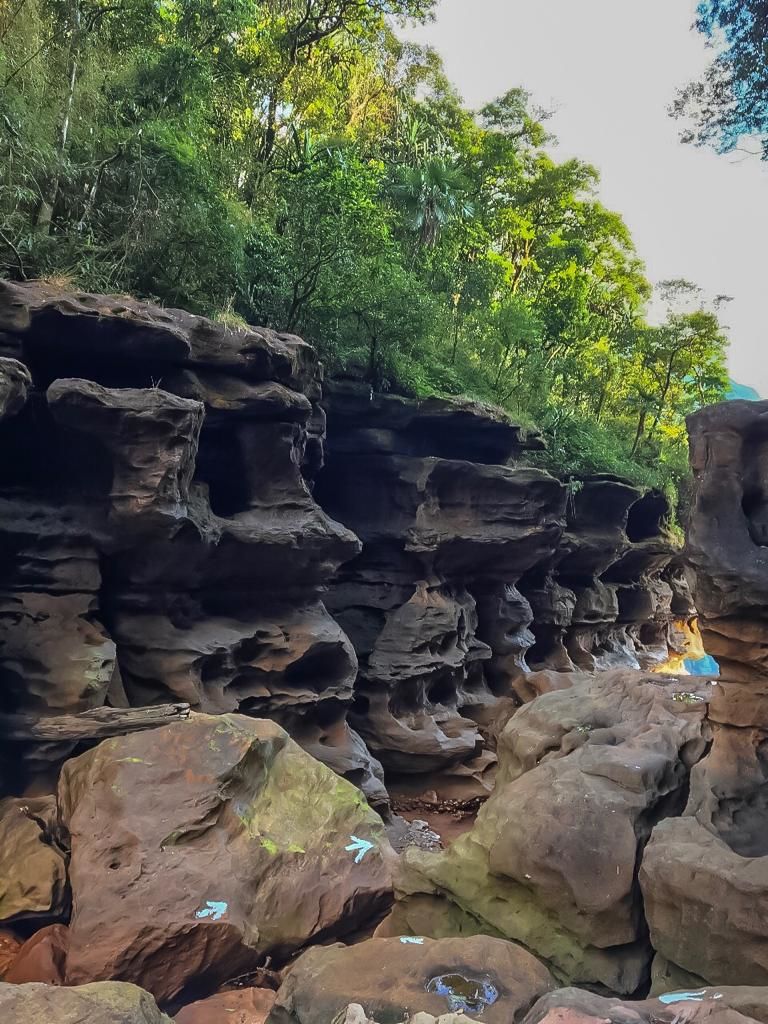 It is worth noting, that a number of wooden ladders have been put by the locals for going up and down the boulders. These ladders reduce most of the arduous climbing and jumping.

Although at one point during the walk, one has to literally crawl through a hole in the rock formed by the flowing water. Not to forget, you will also have to crawl your way back.

Crawling through cuts in rocks,en route top of Nokhalikai Falls 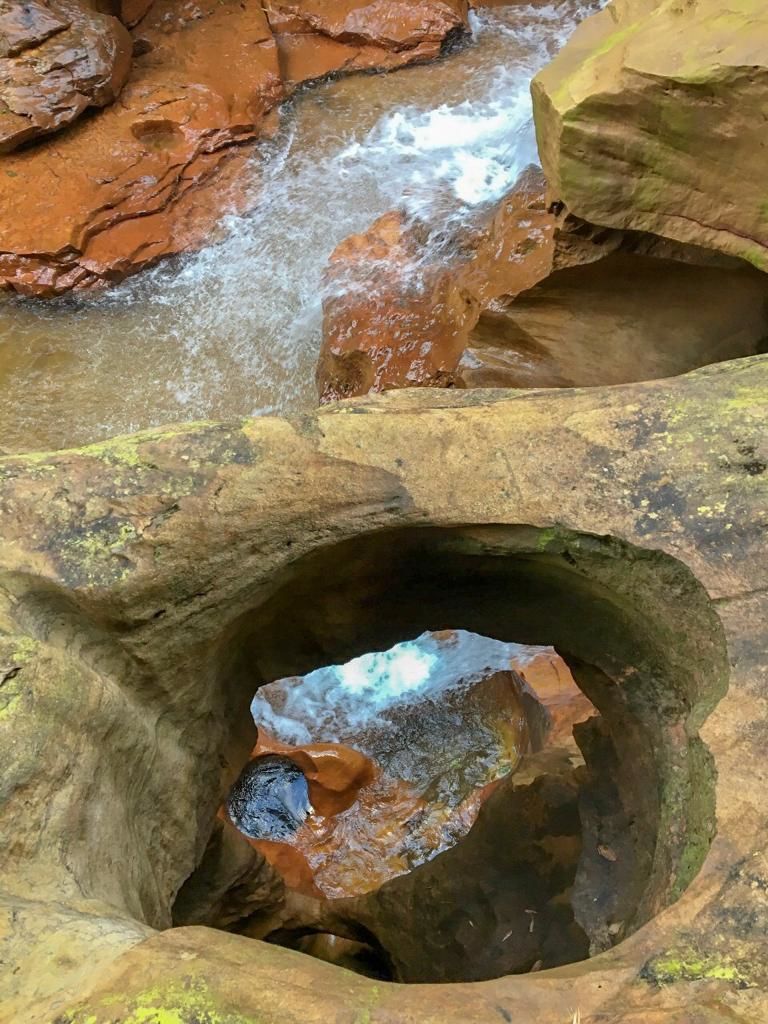 Things to know about the Nohkalikai fall route -

You only need basic fitness to reach the top of Nohkalikai. There are multiple occasions which will make you feel as if you have encountered a dead end. At such points; having a local is an advantage as they know the route.

To me, it didn't look like a marooned route as it's frequently visited by young locals. But I again want to emphasize, try to find a local go with you. 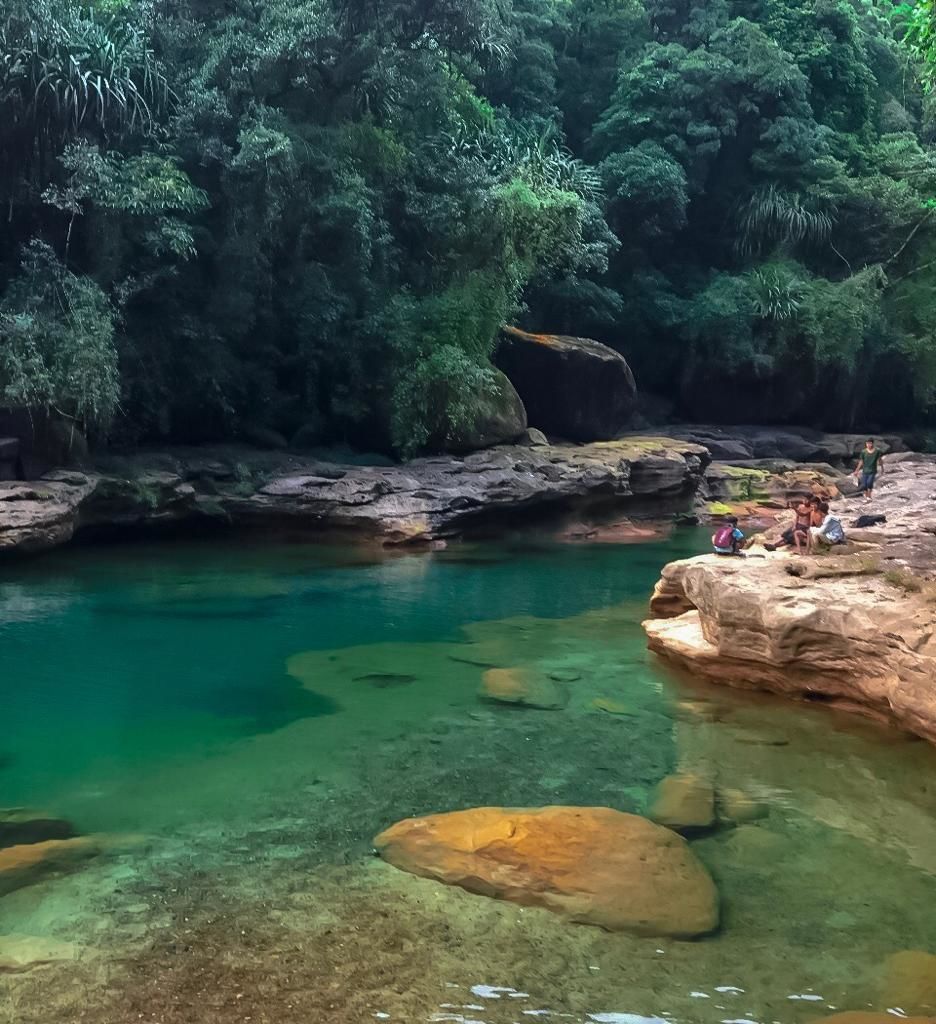 Best time to visit the top of Nohkalikai falls -

Walk to the Tlai falls and the mouth of Nohkalikai can only be done in the winter months till the start of the monsoons when the flow of water is less (October to March). During monsoons, this area is inaccessible due to increased water level. 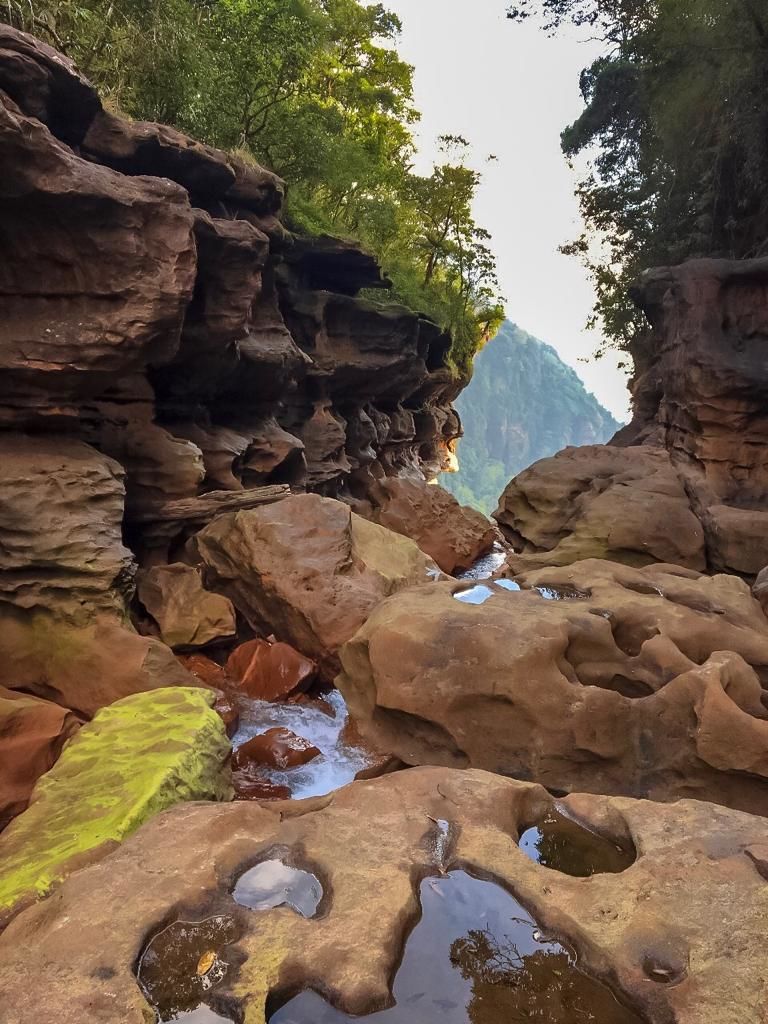 Time needed to reach the top of Nohkalikai falls-

The time required is variable based on the speed of an individual. Locals take really less time, to and fro the route. For tourists, this could turn out to be a half-day activity unless you plan to race through it.

I took me 4 -5 hours approximately . 30 minutes downhill, 45 min to reach the top of the waterfall from Tlai falls, same time on the way back. I stayed at the place for around 2 hours.

Note - For going back one has to take the same route.

There are quite a few stories behind the name of Nohkalikai. The most famous legend also happens to be quiet tragic.

The name Nohkalikai translates to' the Jump of "Ka Likai".' (Ka is a prefix for females in Khasi)

According to legend, in a village near the Falls, a woman named Likai lived with her infant girl. After her husband's death, she worked to support her family and later remarried . Likai, couldn’t pay attention to the new husband as most of her time went in taking care of the infant.

Driven by jealousy the husband one day killed the infant and took off. When Ka Likai returned home, she saw nobody in the house except for a prepared meal. She decided to eat first and look for her daughter later.

Ka Likai later found a severed finger and realized that the meal she ate was made from the meat of her daughter. Stricken with anger and grief she ran to the edge of the cliff and jumped. Giving the fall its name; Nohkalikai.

About Nohkalikai Falls and Sohra -

Nohkalikai falls has a height of 1115 feet (340 mts) . It is the tallest plunge waterfall in India and amongst the world's highest waterfall. It is located around 5 km from Sohra (Cherrapunjee) in East Khasi Hills of Meghalaya.

From the viewpoint, Nokhalikai Falls 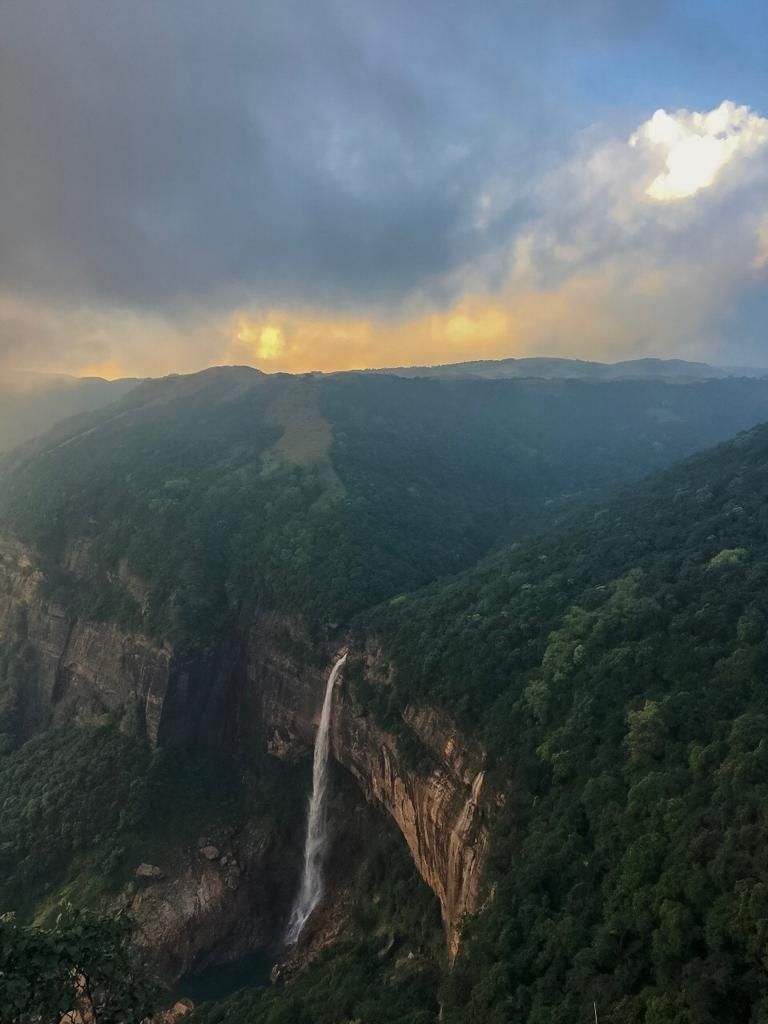 Monsoon season is the best time to visit Nohkalikai when the falls is in its full form. From the viewpoint, tourists can enjoy a panoramic view of the waterfall surrounded by lush greenery. A flight of stairs followed by some walking takes you to the bottom of the waterfall which is a clear turquoise water pool.

During the dry season, like all other waterfalls, Nohkalikai is not at its full flow. But this is the only time of year which opens the heart of waterfall for visitors.

The journey to the top of the falls is once in a lifetime experience and worthy of your time.

You will enjoy every minute of this journey and the memory isn't going to fade away for many years to come.

I am extremely grateful to Mr. Wann Majaw for offering to help me along the route to the top of Nohkalikai Fall. My journey might not have been possible without it. You can check his Instagram page for some wonderful images of Sohra, Meghalaya, India.

Convinced to make Meghalaya your next destination? Click here to book