Meghalaya Travel GuideMeghalaya TripsThe People Of Shillong Are Addicted To This Ancient Tradition! And No, It'S Not Drugs Or Alcohol

The People Of Shillong Are Addicted To This Ancient Tradition! And No, It's Not Drugs Or Alcohol 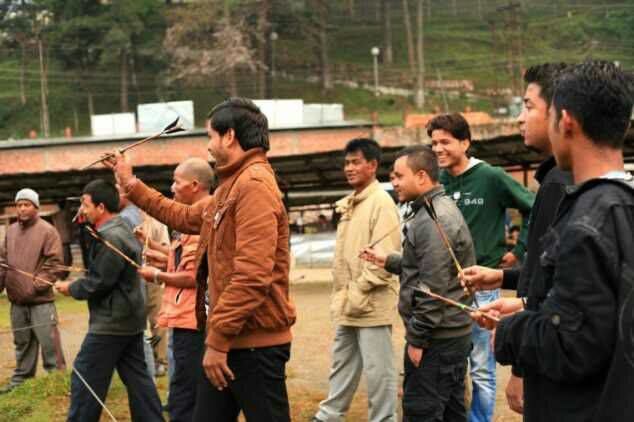 If you take a walk through the Police Bazar in Shillong, the capital of Meghalaya, you will come across dozens of small kiosks selling lottery tickets. The shapes and sizes of each of these stalls is different. But they all have two things in common – a scrawny blackboard scribbled with numbers hanging outside each, and the fact that they are selling tickets to the archery competition that takes place every afternoon.

In case you happen to approach any one of these counters, the sellers will nonchalantly ask you whether you've chosen a number and how much you'd like to bet on that number. For first timers, it can be slightly confusing, but this is Teer Betting in action in the middle of Shillong's most popular shopping district.

What is Teer betting?

The traditional sport of archery is played with an arrow, which in Hindi is called 'teer'. In Shillong, this word takes up the meaning of a traditional betting sport that allows people to win thousands of rupees in one afternoon.

The rules of the game are quite simple. There are 50 archers, each of whom have to shoot 30 arrows (teer) at a target. You have to predict the last two digits of the total number of arrows that hit the target. For example if 950 arrows hit the target, then the winning number is 50. The better who gets this right, takes home all the money that a particular stall has earned from selling the lottery tickets that day! This is a daily occurrence.

The history of teer

Archery has been the traditional sport of the Khasi tribe of Meghalaya for centuries. The sport actually has ancient roots in the community and there are several popular myths stating how it started. According to one legend, archery was a gift from the gods to Khasis. As a result, the sport itself is considered divine. It was apparently received by the local Reigning Goddess, who passed the divine bow and arrows to her sons. It has since been passed down through generations to young boys.

Nowadays, young Khasi boys receive training for archery at a young age and become skilled by the time they grow up. When a boy is born, a bow and three arrows are placed on his forehead at his naming ceremony. The same bow is buried with him when he dies, while the arrows are shot into the air to accompany his soul to heaven. The weapon is preserved safely inside the boy's house for his entire life.

Betting, however, didn't start on the sport until around the 20th century. An exact record of when it started is not available. It continued for a few decades before betting on teer was banned by the state government sometime in the 1970s. The game continued illegally in certain parts of Shillong, till the new government of Meghalaya once again legalised it in 1982. It is now controlled under the Meghalaya Amusements and Betting Tax (Amendment) Act 1982.

It provides jobs and livelihood

Shillong is reportedly the most popular destination for teer betting, but it takes place all across Meghalaya. Again, no official figures are available, but according to a report in The Quint, it is believed that there are over 5,000 teer counters across the state. The betting is believed to provide employment to over 10,000 people! These are mostly ticket sellers and operators at the archery counter.

The same report by The Quint states that ticket sellers and operators ear anywhere between Rs 350 and Rs 500 a day, while the archers are paid anywhere between Rs 250 to 300 a day. Locals also say that the livelihoods of several families depends on teer betting. However, it is the big fish in the business – counter owners and bookies – who actually make the big bucks.

Betting takes place on a daily basis, with people buying lottery tickets through the day from 10am to 3.30pm and placing bets on numbers between 0 to 99. As soon as the clock strikes 3.30, the action shifts from the market streets to Khasi Hills Archery Sports Association.

A peaceful silence that descends on the crowd as soon as the archers start preparing for shooting, which commences a little after 3.30. As mentioned earlier, 50 archers with 30 arrows each begin shooting. As soon as the last arrow is shot, blinds are drawn in front of the target and then counting takes place.

A second round takes place at 4.30pm when the archers shoot 20 arrows each.

The winner gets it all

Every day, two results are announced - once after the first round and then after the second round. On a normal day, when a person guesses the correct number for one round, he/she can end up earning up to Rs 80 for every Rs 1 invested. Exceptions are when someone is able to guess numbers for both rounds correctly on a single day. He can end up earning Rs 4,000 for every Rs 1 invested.

But there's a dark side too

Despite the fact that Teer Betting is essential to Meghalaya's economy, reportedly providing employment to over 10,000 people in the state, it essentially follows the principles of gambling. If you talk to locals, you will find that several people have ended up losing their life savings while betting on teers.

The other problem is that the workers who are involved in the day-to-day activities make the least amount of money and it is subjective to the day's sale. While the big bucks go to organisers  and counter owners.

Do you have any interesting stories and facts to share from remote corners of India? Write about them on Tripoto! And check out our YouTube channel for amazing videos of travellers from around the world.