Back to nature: Fjords of Norway (2)

This trip was originally published on www.travelfrreak.blogspot.com

Back to nature: Fjords of Norway (1)

Our first view of the Geiranger fjord was from a viewpoint on the way and it looked stunning. To see this huge water body coming in with mountains on both side was very enchanting. And you need to see the ferry coming in the fjord to realise the scale and size of the fjord. And I must say now itself, I totally enjoyed the two days I spent there. Geiranger felt a lot more isolated from the rest of the world, with the only way of coming in through the narrow fjords and not that easy to get out of either. The kind of place you would expect in Lord of the Rings and the likes:). 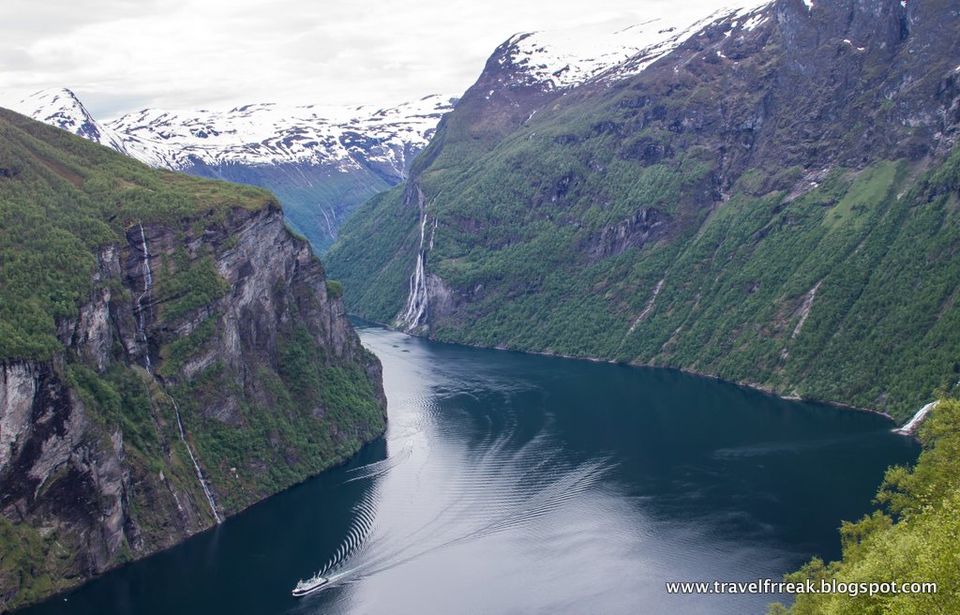 noThe town of Geiranger was right at the mouth of the fjord and at a very captivating location. We were staying at the Hotel Geiranger which was right in the middle of the 100 houses in Geiranger:). Just next to the fjord, the local waterfall and the high street of the town:). It is apparently one of the oldest buildings in town. Also apparently the whole town shuts down in winter and most people leave. So this hotel would have been the perfect location of the hotel in Shining;-).There are only 220 actual residents in town, rest are all tourists and people looking to make money off tourists:). 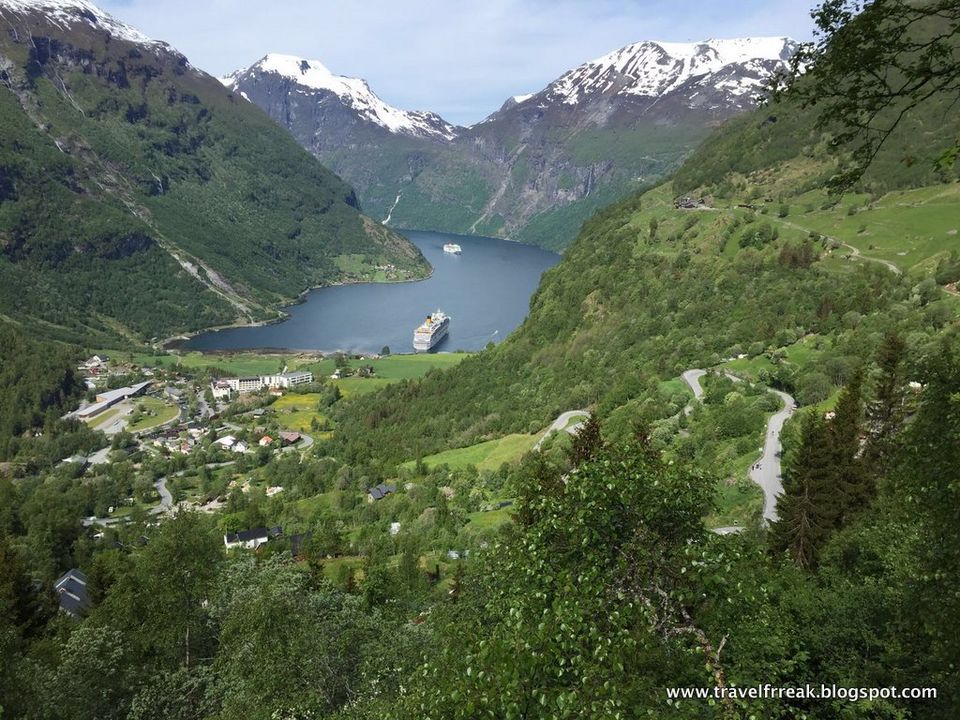 Anyways, once we checked in, we immediately left for a mountain biking tour that we had booked already. It was the 'Sky to Fjord Downhill Bike Tour' with Geiranger Adventure located in the local high street. They took us in vans to the top of the Dalsnibba mountain, gave us the mountain bikes and left us on our own. The place where they dropped us was all snow covered, and there was also a frozen lake on top. 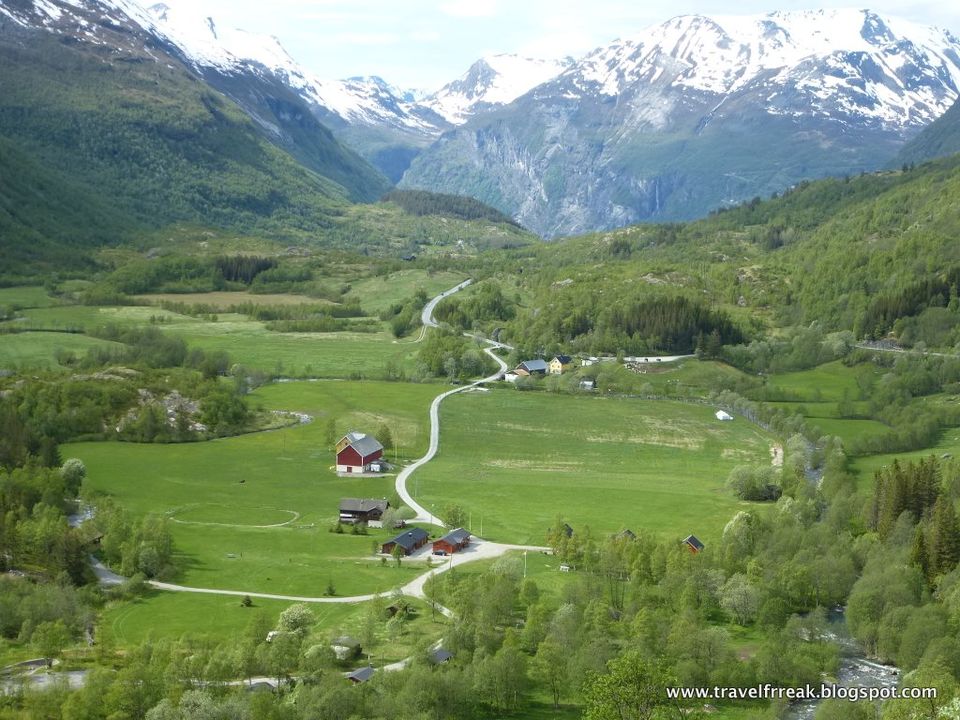 And then we started cycling down the mountain. This experience was the second high point for me of the trip (the other two were the viewpoint in Andalsnes mentioned above and the boating we did later). Imagine going down a green mountain, fresh breeze blowing on your face, greeted with spectacular views at every turn - of valleys and mountains and waterfalls on the way. And not having to cycle at all, as it was all downhill. 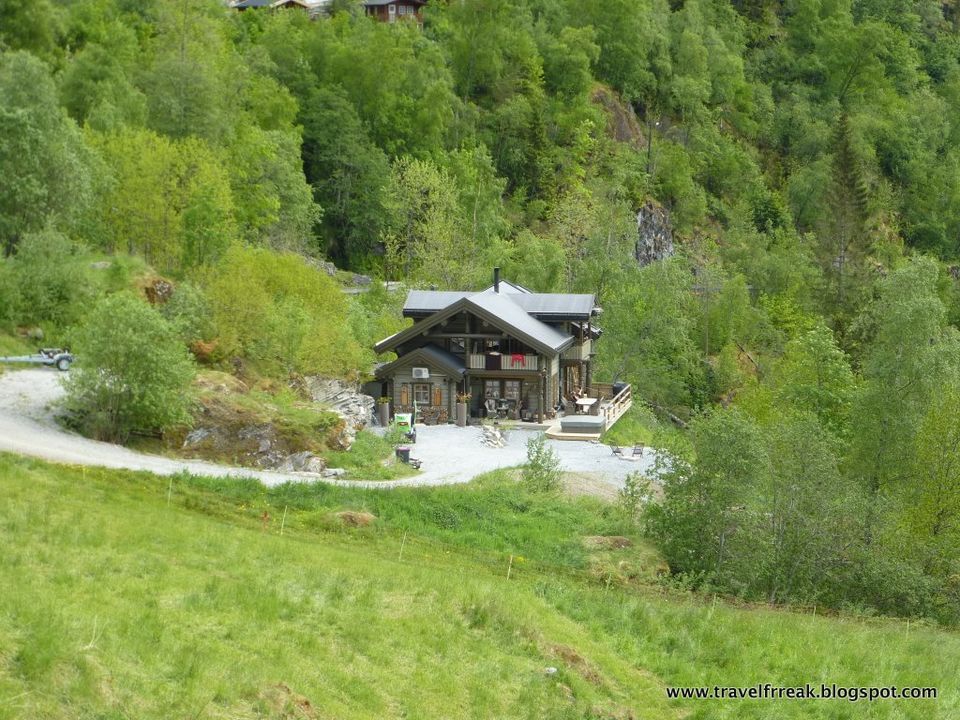 We just had to control not going down too fast and letting it all finish too fast. I buzzed past the whole distance and just enjoyed the whole feeling it gave me of flying free. I wish the route had been longer. I wish I could have cycled downhill like this for hours, but alas that always takes going up first:(. 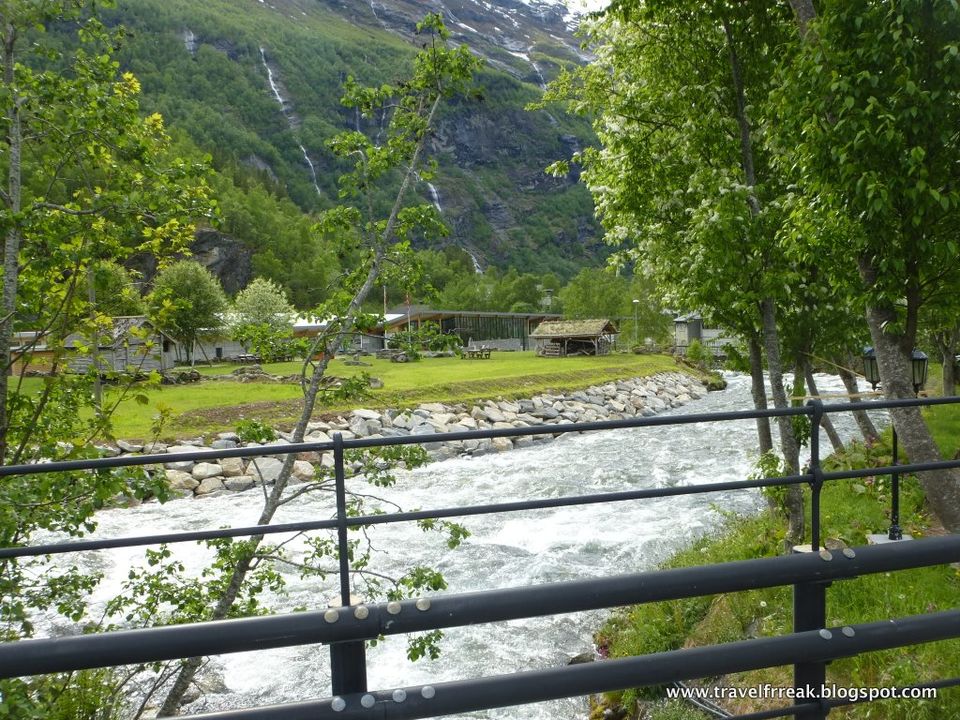 We lazily came down in about an hour, stopping on the way. There was a viewpoint giving a good view of the fjord. And we also passed some wooden huts which were used by agriculturists many years ago. But as I said, it all finished too fast:( 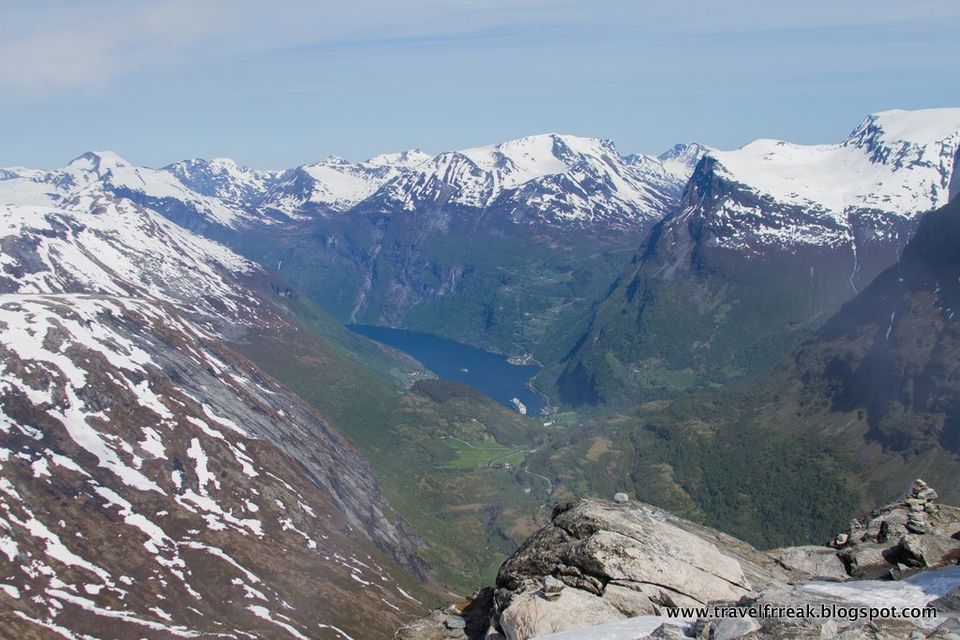 For the evening activity, we split up into two groups. One went for a trek, a beautiful one which takes you behind a waterfall. The second of which I was a part of, had had enough of physical activity the previous day and chose the lazy option of boating. (You can also take the official cruise which takes you along the fjord but as we later realised, the boating is better:) ). We rented a 25 KW speedboat from a hotel about 15-20 mins from our hotel and off we went, the 5 of us. It was a new experience for us to steer the boat ourselves. Initially we rode slowly to each of the waterfalls around (including the famous Seven Sisters one), enjoying the cold brush of air and water splashing on our faces. 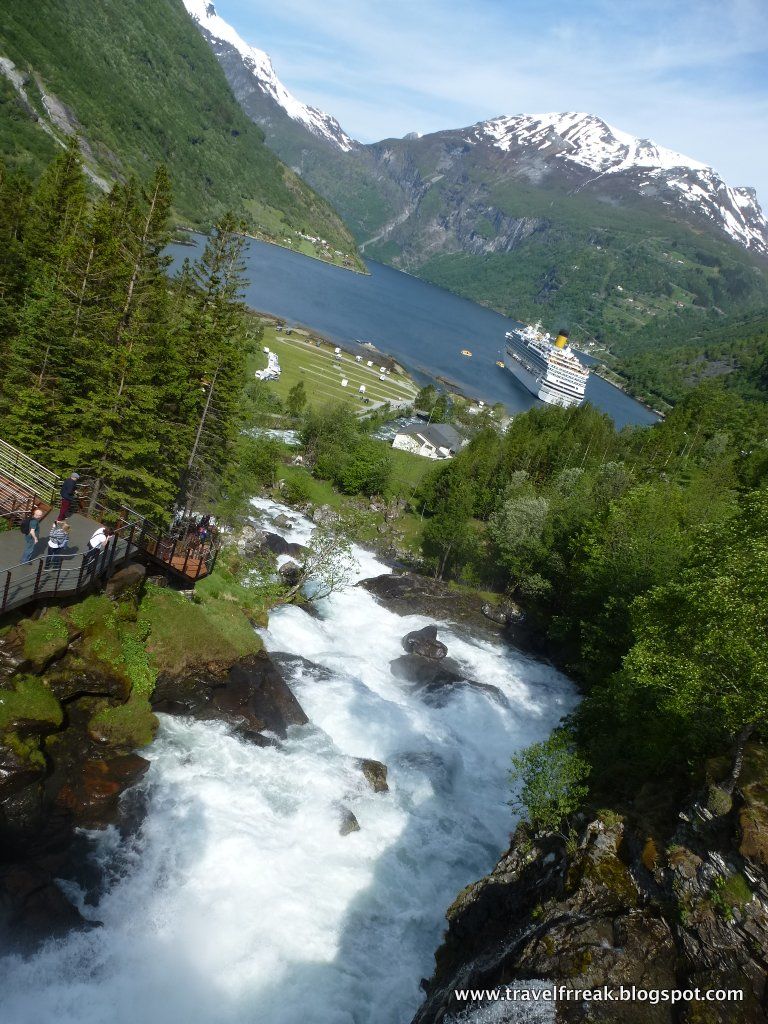 And then we discovered speed! Then there was no stopping us. The last half an hour of the rental, we started driving at top speeds and swerving at the last minute to get cheap thrills. We were splashing water on everyone, going too close to the mountains and totally rocking it! It was so much fun that we decided to come back again in the morning:). It also tempted me to get a boating license and take up boating as a hobby, given my love for water anyways:). 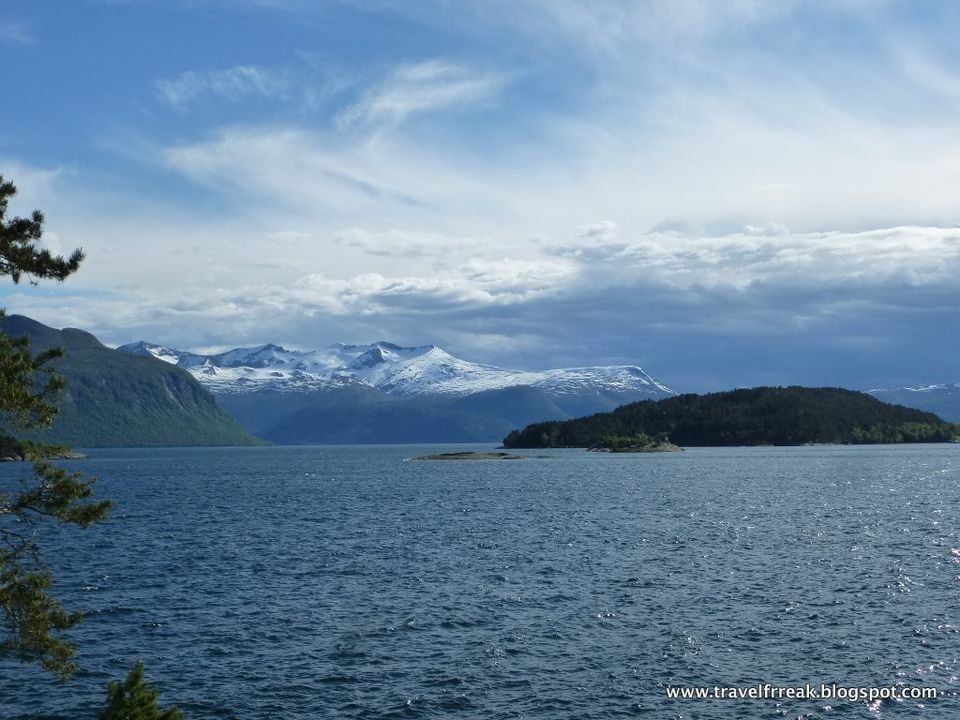 The rest of the day we spent in the small pedestrian high street in the town with cute little shops. We had chocolate at the local chocolate place which has the most amazing spread of chocolate options. They were making their own fresh chocolate in their basement factory. There were a couple of troll figures also dotted everywhere (man-made, not real;-) ) and were good photo opportunities:).

Given how small Geiranger was, we were not expecting to find proper food options and went to at least 3 restaurants. Finally we did decide on Olebuda and it turned out to be AWESOME. One of the best gourmet meals I have ever had - the dishes made using a mix of unusual ingredients, were so yummy - one of my most enjoyable meals in the trip. I do think though our loud Indian group did scare away some of the quiet Norwegians who were eating there, but some things can't be helped, can they:)? If any of you is going to Geiranger, I would recommend definitely eating at Olebusa, even if you are vegetarian. It is totally worth it.

The fourth and the last day, a couple of us went up the Batsnibba point and to the frozen lake nearby, and then we all went boating again before heading back to Alesund for our flight back. From the top, you can get a grander view of the places around.

In the morning, I went for a walk along the waterfall path (the town had a huge waterfall flowing through it ) and just enjoyed the walk around. Geiranger is a popular destination among the cruises that come to Norway. So when we woke up in the morning, there were already two huge cruises who had come in that day and were moored in the fjord. And because of that, there were loads more people walking around than the previous day. I earlier thought that the cruises would spoil the view around, but surprisingly they blended in effortlessly with the colours around.

I also learnt that the mountains on both sides of the fjord will at some time break and fall down, as they have cracks in them. Such a happening would trigger a tsunami, therefore scientists track the cracks in the mountains the whole time. Also I noticed a lot of Indians travelling there, which was a surprise for me. I would assume Geiranger is too remote to be on a typical itinerary but clearly was wrong. We also ran into a group of 10 families visiting from Calcutta RBI and staying in our hotel. They were not too impressed by the place though, and thought the rest of Europe was definitely better :D.

After the walk, we again went for a boat ride in the fjord but this time could only got a 15 KW boat. And surprisingly, the boating was even better than the previous day (as if it could!). I steered the boat for that hour and loved every moment of it. We were very focussed and rode at top speed out of the fjord. We went up to the town of Hellesylt where we started experiencing the waves from the sea. The first time we encountered them, they were huge and it felt that we could overturn. We had to shut off the engine and still it felt scary!

When we felt that the boat might almost turn over, was when we decided to turn back. I had mastered manoeuvring the boat by then, so did a lot of sharp turns on the way back, splashing water on all of us. It was a fun and exhilarating time for me and I totally loved it. I seriously think I should go boating more often and take up a course to get a licence:).

We barely interacted with any Norwegians during our entire stay. The few we met spoke good English, which is always helpful. And we saw lots of immigrants everywhere - apparently, 15% of the population there are immigrants. The population density also felt a lot higher than I would have expected. We barely passed areas which were not inhabited. There were always some houses around (though rarely any people). This was so unlike all my drives in Kashmir and Arunachal - where sometimes for hours you don't see any population.

We had a good experience eating (even vegetarian food) in Norway, again quite unlike what we had expected. Our first dinner was in the Italian restaurant, Piccola Mama Rosas where the pizza was yum and had a masala to put onto it to add to the spicy flavour. The second meal outside was the cafe on Atlantic Ocean Road which was average. But we had a stock of theplas to keep us going there:).

The third was at Olebuda which was out of this world. And the last was in Systra cafe in a random town, Strojolt on the way to Alesund, which was again tasty. The rest of the time we cooked at home (and loved) the maggi and the masala baked beans.

The hotel at Trondheim, Scandic was located in the city centre next to the canal. But we barely slept there 4 hours, so don't know much about it. The villa we had rented was pretty and comfortable. And that is where we realised, in Norwaythere is light 24 hours of the day. So you need very dark curtains if you want to get any sleep. And lastly, Hotel Geiranger in Geiranger was also perfectly located, right in the middle of the town, with a good view of the fjord from everywhere.

There are not many tips to give actually, because my friends planned it all and it went so well. Overall, it felt like a comfortable and convenient place to travel. Just one tip I can think of - Norway is very expensive, even more than London (if thats possible!). A pack of crisps costed the equivalent of 7 GBP at the airport. So you should plan on saving money all the way; pre-booking activities and hotels will definitely help.

Driving was again convenient - great and empty roads, barely any cars and good views to keep you entertained. We had a huge mini bus given there were 9 of us. All in all, fun and convenient.

I felt that Norway is one of the loveliest and close to nature places I have visited, and the calm of Norway would be difficult to find anywhere. I totally loved and enjoyed the trip, and it is definitely a country I would love to come back to.

This blog was originally published on 'TRAVELFREAK'