This blog post captures our wonderful experience of traversing the Japanese Alps, a.k.a the ROOF of Japan, through the Tateyama Kurobe Alpine Route.

The Japan Alps: 中部山岳国立公園, or the “Chuubu Sangaku National Park”, is a series of mountain ranges in Japan which bisect the main island of Honshu, encompassing four prefectures of Niigata, Toyama, Nagano, and Gifu. Nestled at the bases of the majestic peaks of the Japan Alps are seven fascinating cities, such as Nagano (which hosted the Winter Olympics in 1998) and Toyama. Each city is blessed with its own top-class sightseeing spots, making for a truly memorable vacation in the magnificent natural surroundings of Central Japan. It surely is a hiker’s delight!

The Tateyama Kurobe Alpine Route (立山黒部アルペンルート) is a unique and spectacular route through the Northern Japan Alps which is traversed by various means of transportation including cable-cars, trolley buses and a ropeway. Completed in 1971, the route connects Toyama City in Toyama Prefecture with Omachi Town in Nagano Prefecture. It is completely inaccessible from December to mid-April. (In 2015 (that’s the year in which we went), the entire route was open from April 15 to November 30.) The main attractions of the Tateyama Kurobe Alpine Route is (1) the scenically spectacular Kurobe dam and (2) the majestic snow corridor whose snow walls reach up to 20m high. A section of the snow corridor around Murodo is open to pedestrians usually from mid-April to mid-June.

How to reach there:

There are two ways of traversing the route: (1) Tateyama to Ogisawa; and (2) Ogisawa to Tateyama. We took the latter, majorly due to the following reasons:

1. There are more “attractions” in this direction (from Ogisawa to Mt. Tateyama) and hence we wanted to do them while we are fresh and energetic,

2. We had to stay that night, and Toyama city has more hotel options.

Here is the route-map. As mentioned above, we took the Ogisawa to Tateyama route (in the map below, its right to left)

Tip: for live status of the route, please check the official website (don't worry, its in English ;-) ).

There are various ways to reach the Shinano Omachi station. Since we coming from the western part of Japan, we went through Osaka. 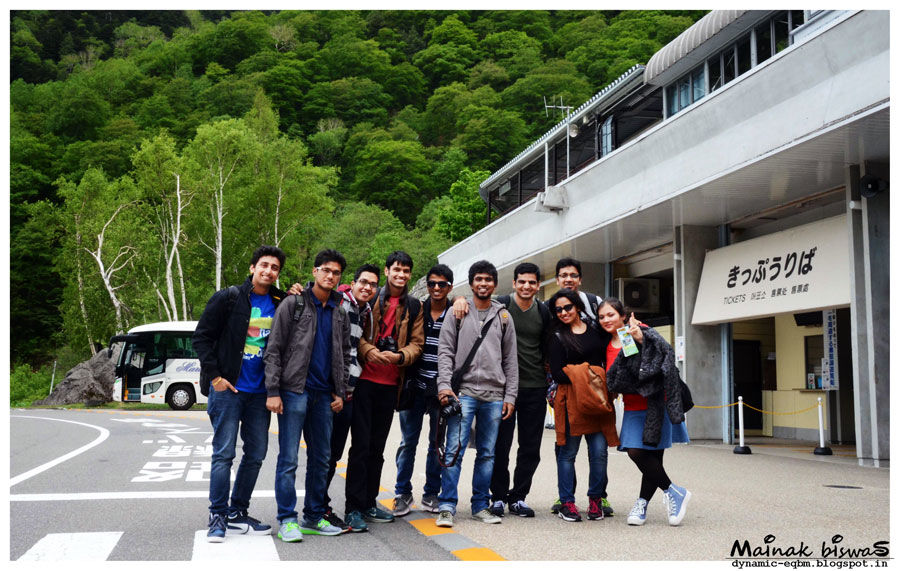 The bus ride from Shinano-Omachi to Ogizawa took 40-45 minutes, and during that time enjoy the view outside.

waiting to board the trolley bus 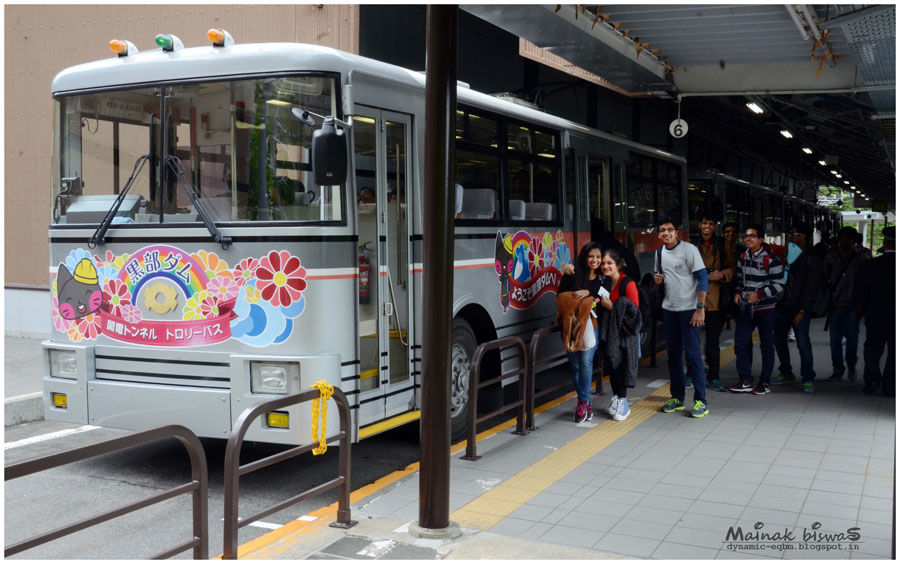 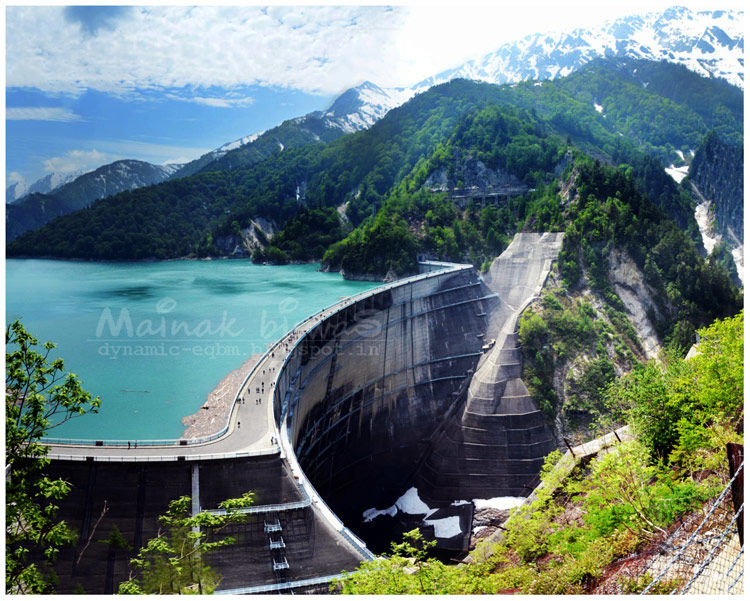 After a short break and a sit-down at the Daikanbo observation deck, mainly for posing and photos, we boarded another trolley bus. This time it was a tunneling one through Mt. Tateyama for 4km to Murodo. This trolley bus took 10 minutes. And “whoosh”, after 10 minutes on the trolley bus we were all of a sudden on the other side of the 3015 m high Mt. Tateyama.

The last stage of the Alpine Route is with the cable car down from Bijodaira to Tateyama, which takes 7 minutes. We didn’t spend any time in Tateyama, only waited for the train. You can choose to end your Alpine Route journey here, if you want to sleep in Tateyama (but there are not many options here). From Tateyama we took the train to Toyama (1 hour). We reached Toyama at approximately 7 p.m.

The Alpine Route Japan was a very nice trip! It was lovely to breathe in some fresh mountain air again and get to see some breathtaking mountain scenery. 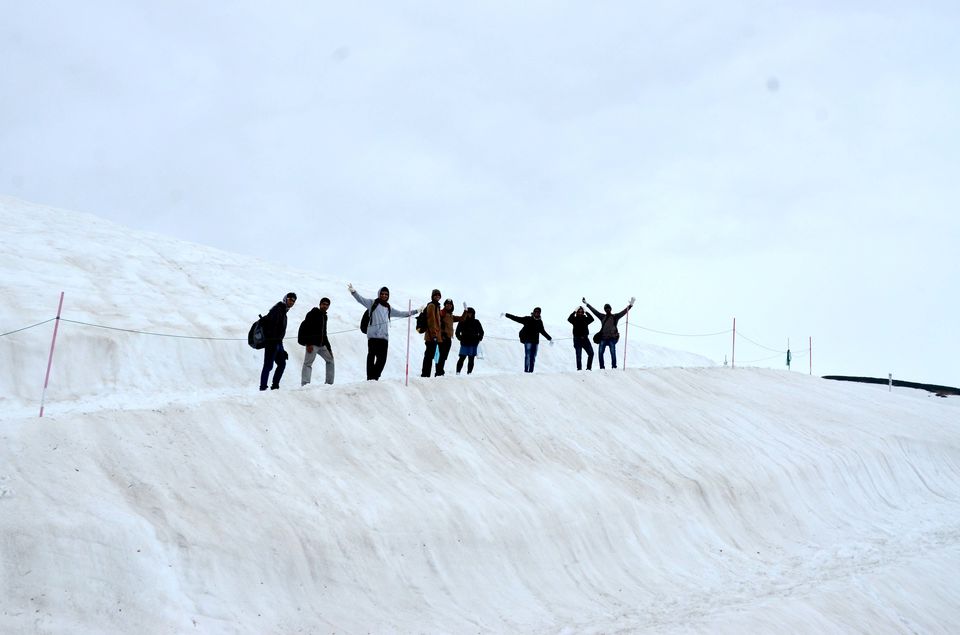 Tip: At the Ogisawa station, we headed over to the ticket office and bought the Alpine Route tickets, which was 9490 JPY per person to Toyama train station. Its form here the Alpine route journey begins, with the first mode of transport being a cute trolley-bus!! The trolley-bus ride was pretty cool, and took us through a 6 km tunnel up to the giant Kurobe-dam in roughly 15 minutes.

The Kurobe Dam is Japan’s tallest (186 m) as well as highest dam, and a pretty impressive sight!

From the trolley-bus station, we climbed the 220 steps up to the Observation Desk. Once on top, we were rewarded with some absolutely spectacular views over the dam and its surroundings! All the steps were totally worth it!

awesome scenery across the dam! 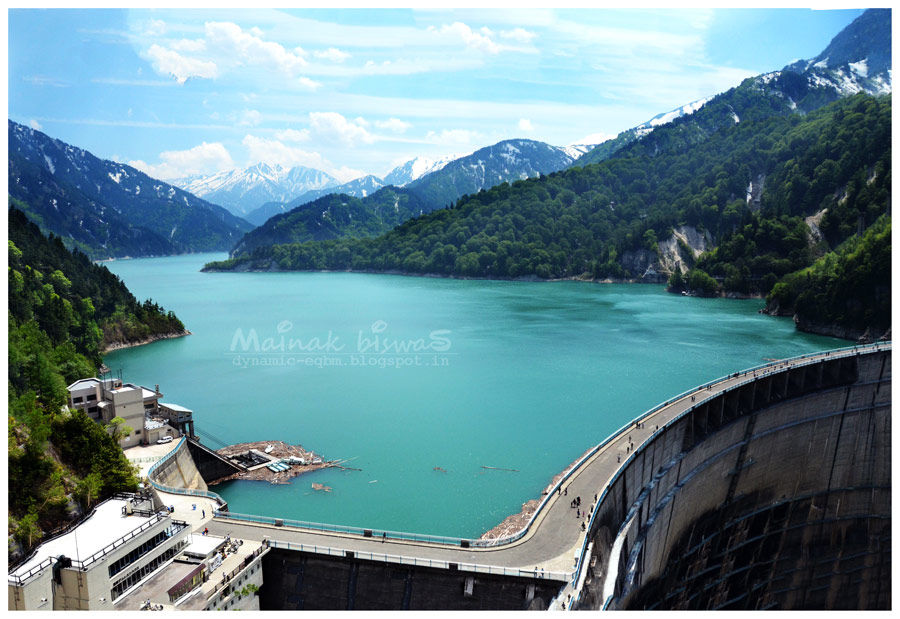 Unfortunately, we weren’t able to see the water discharge. But, as 'as legends say', it is possible to see a large rainbow on clear days when the plumes of mist created by a powerful discharge of 10 tons of water per second, making it one of the dam’s principle attractions.

When we had done admiring the view from the Observation Deck, we walked on the pathway across the dam (took about 15 minutes) to the Kurobeko cable car station on the other side of the dam.

We at the other side of the Dam! 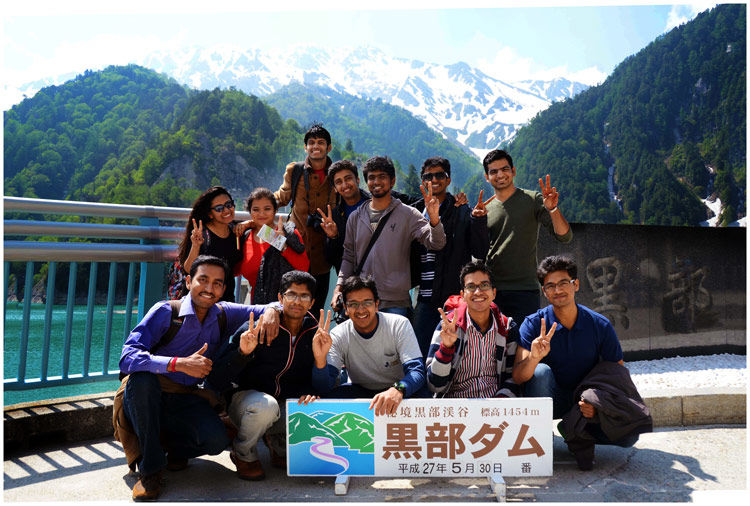 Here we jumped on the underground cable car (yet another mode of transport), which took us to Kurobedaira (5 minutes).

When we stepped out of the cable car, we were hit by the cool, fresh and snowy mountain air. It was so refreshing to breath in the air and take in the breathtaking mountain scenery all around us. 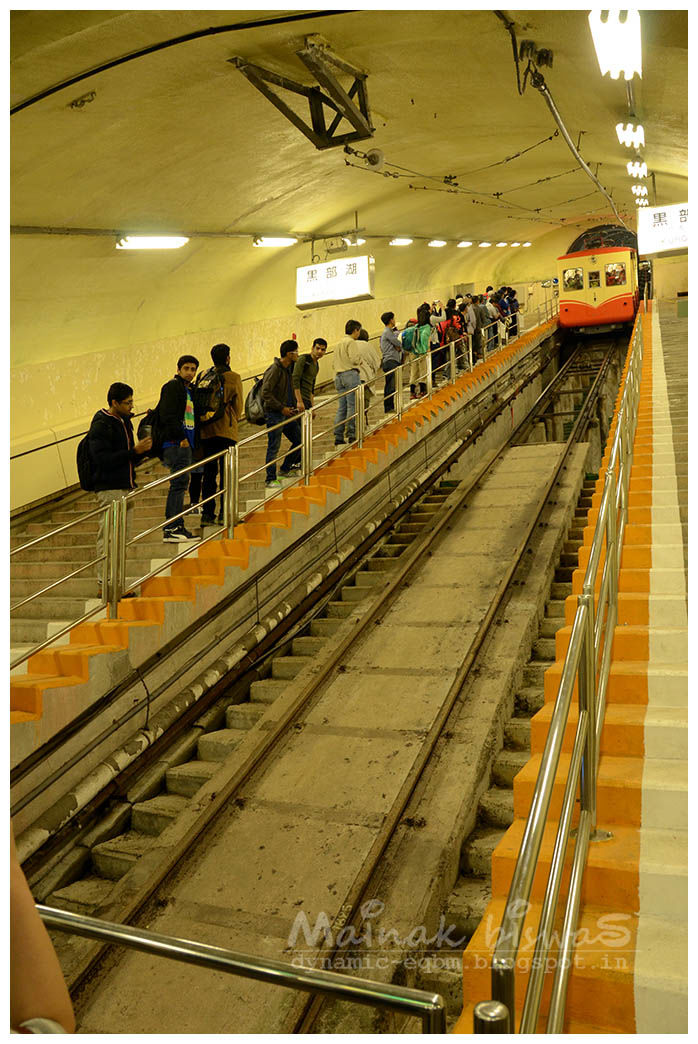 After taking in the mountain view, we took the Tateyama Ropeway, which took us 500m further up, to the Daikanbo. ("daikanbo" in japanese means the peak from where you have the best view). The Ropeway took 7 minutes, and the views were spectacular! 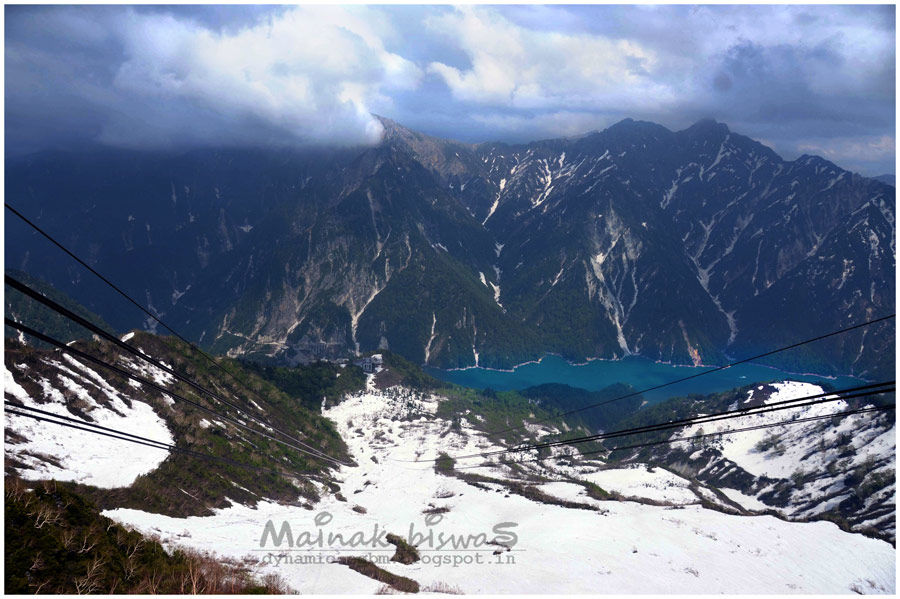 Murodo is the highest point on the Alpine Route, unless you are climbing the Mt Tateyama by foot. Legend says that in the 17th-19th centuries, Mt Tateyama became one of Japan’s three holy mountains along with Mt. Fuji and Mt. Hakusan, and became very popular among pilgrims. 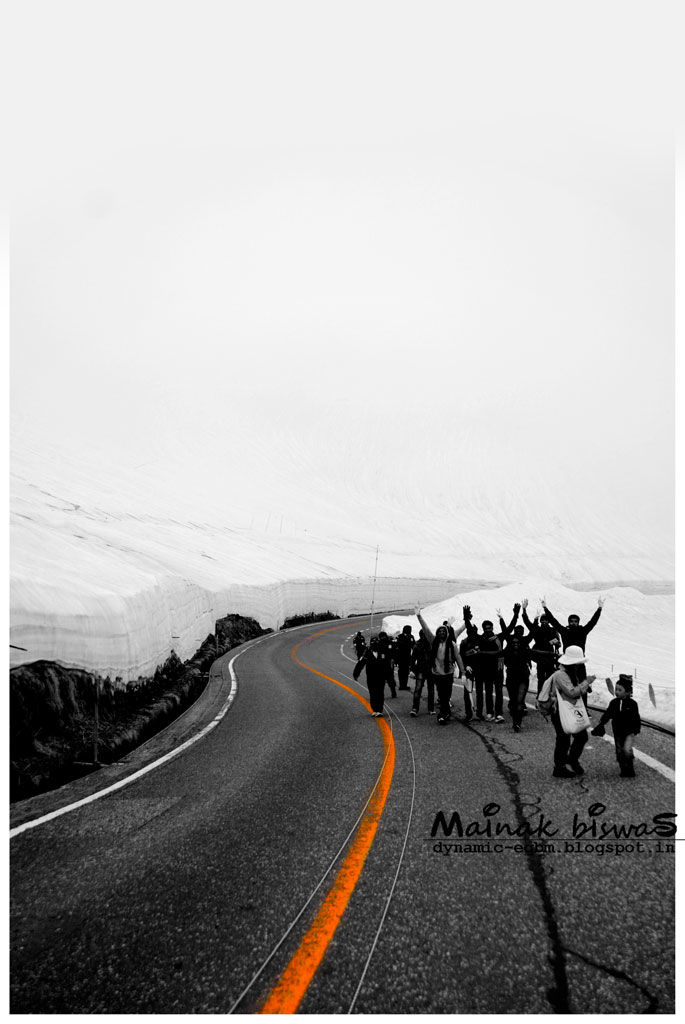 After our hike to Mikurigaike Pond, we continued the trek down with a bus to Bijodaira. The bus ride took about 50 minutes, through green and lush forest with huge cedar trees.