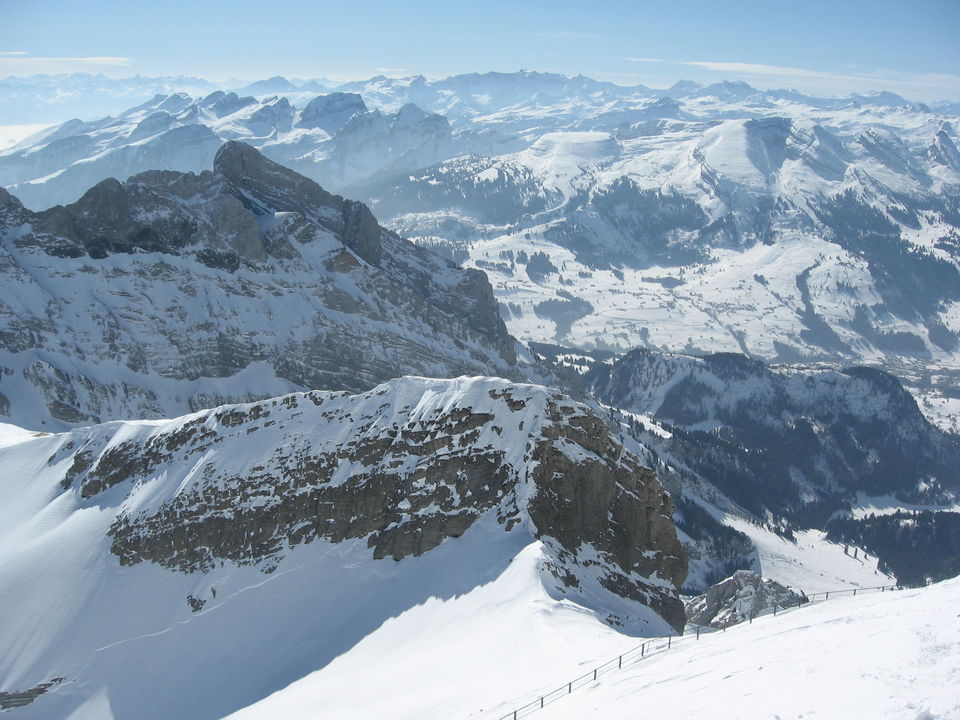 This was back in 2010 when I happened to visit a Swiss mountain top for the very first time. I went to a winter school at the southern most part of Germany and while searching in the web for weekend activity, I found that the most interesting recommendation is to visit the mountain top which is the 13th highest peak in Alps and the highest in Appenzeller Alpine region. The journey though isn't a smooth and direct commute, but takes a bunch of trains, bus and a cable car (called Schwebebahn) to reach the summit. But while people were talking about their mesmerizing experiences, I decided to visit that place, at least once. Later, I lived in Konstanz and happened to visit the mountain many more times due to its magnetic attraction.

At 2503 metres above sea level, Santis is the highest mountain in the Alpstein massif of northeastern Switzerland. It is also the culminating point of the whole Appenzell Alps, between Lake Walenstadt and Lake Constance. Shared by three cantons, the mountain is a highly visible landmark thanks to its exposed northerly position within the Alpstein massif. As a consequence, houses called Santisblick can be found in regions as far away as the Black Forest in Germany. Santis is among the most prominent summits in the Alps and the most prominent summit in Europe with an observation deck on the top. The panorama from the summit is spectacular. Six countries can be seen if the weather allows: Switzerland, Germany, Austria, Liechtenstein, France and Italy. (Source: Wikipedia)

The journey date was a very gloomy day, though the weather forecasted for a bright day - the weather at mountain can change abruptly. After preparing my backpack and food for the day, I slept well the day before the journey. In an early morning, I went to the Swiss-train counter to buy the tickets. One can get "Ostschweiz Tageskarte" which is a day-pass throughout the Appenzell region in any transport except a cable car to summit or a ship in a mountain lake. Though I was enthusiastic about the trip, I was quite hesitant at that time, while I saw the city was drown in thick fog with little bit of rain, and the price of the trip were roughly 40 Euros. But the lady at the counter assured me that after reaching the summit, the weather will be all OK. She also gave me printed direction for to-and-fro en-route plan that I could stick to, with a warning not to miss the last cable car-bus-train combo to reach Konstanz at the end of the day. I trusted her completely and the outcome was quite rewarding.

So with all these arrangements, I boarded on a local "Seehas" train at Konstanz, that took me through the beautiful Canton of Thurgau, first to Weinfelden - from there another local train to Gossau, then a connecting Appenzeller train to Urnäsch and finally a bus to Schwägalp. The total time of the journey was around 2-3 hrs and thanks to the Swiss system, all connecting trains were on time and accessible without problem. The journey, in all seasons whenever I went back to Santis, was fantastic - to see mountain cows, apple trees, flowing rivers and fountains, lush green meadows, swiss chalets, broken clouds and so on. Finally the bus goes via the scenic Schwägalp pass down to the foot of Mt. Säntis, a place named Schwägalp. As the bus rode the pass, slowly all the mist went off, finally to have sun over snow in all places! It was a fantastic journey and the end station is quite fascinating to view in a non-cloudy day. For a couple of minutes, I couldn't believe that we're going atop this gigantic snow-wall, which was already looking heavenly in the morning rays. Finally I had the extra tickets for the Schwebebahn (because of the 40 Euro ticket, I got a 50% concession, so it roughly took 15 Euros more for the to-and-fro cable car trip).

The journey up was impossible to describe for an inexperienced traveler cum writer like me. I could only say that it has similar charm, when one boards a flight for the very first time. As it went up in altitude .... high and high and high .... I was thinking this is the end - if the rope breaks, none will be alive. With that awe-mixed-romance, I finally arrived at the summit. They had a souvenir shop up there and a radio tower that the telecom uses for the whole Appenzeller region. The spectacular panorama of the Alpine peaks is impossible to describe in words! From the top, one can see the Alpine stretch of 6 nations and numerous peaks all around welcoming me with a chilling -10 celsius cold. The wind up there were also quite heavy, so one cannot sustain for more than, say, 10 minutes in the air. However, I met a mountaineer who climbed that giant piece of wall starting in the early monring and out of sweat, he changed all his upper clothing in that chilling windy outdoor!

I couldn't see any south Asians around & later I realized that Asians were quite rare tourists there. An European couple took their Japanese friends there - so with a bit of surprise in seeing me, they were humble enough to interact, ending up explaining all the attractions around the mountain and identifying the peaks. Although up in there was a restaurant, I had my sandwiches ready for lunch. In later part of the day, I viewed the mineral museum, learned a bit of impressive history and culture of Appenzell and spent time in the souvenir shop. Finally, I went down to Schwägalp around 3pm with another thrilling cable-car journey. While it was the later part of the day, the sunlight were all over the place and I decided to walk a bit around the mountain. It was quite enjoyable with different forms of snow and to view a few mountain sports of the kids.

Finally around 4pm, I bed goodbye to the place and took the returning bus to Urnäsch and came back home in Konstanz with the designated route. I went in a similar expeditions around the autumn (that time tickets weren't expensive and the views up were fantastic! A few tips: it's reachable from Zürich as well, if you want to be on a mountain trip in Switzerland for 1-2 weeks, better buy a monthly half-fair card - with that both train and cable-car will be cheaper. Also, the Appenzeller mountain train is what not to miss, basically the mountain train stops after a stipulated time, however, from the lower stations like Gossau or St. Galen, one can even go back to Zurich or Konstanz at very late night. I, for instance, went to St. Galen on a returning trip and spent time in exploring the city, only to catch my returning train at 10pm. You better improvise your trip to get the best out your time and money, but be absolutely clear about the schedule. Good luck with the weather :)