A tantalizing trek in Vattakanal 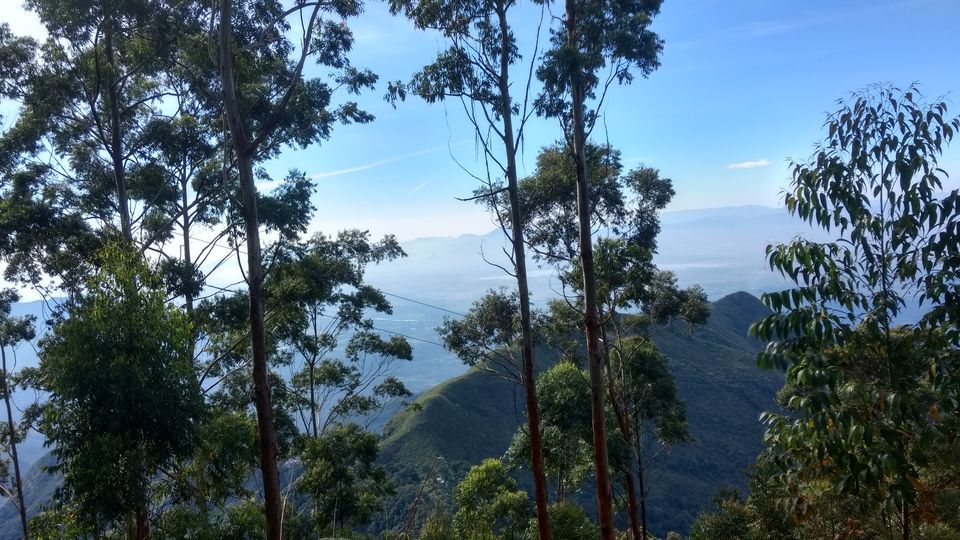 Vattakanal, though often described as the lesser known sister of Kodaikanal, has off late gained quite a lot of popularity owing to various articles in leading dailies like "The Hindu"... We, a group of four friends (moderately fit!) planned a short trip to this beautiful hamlet during the Dussehra holidays this year. However, the purpose of this blog is not to describe the beauty of Vattakanal, or the homely ambience of Altaf's cafe or the things to do/see in Kodaikanal (as there is enough information available on these!), but to describe the enigmatic trekking experience we had from Dolphin's nose to Kumabakarai waterfalls! I must mention here that we had no plans of trekking initially, it was after we met a group of enthusiastic trekkers  near Dolphin's nose followed by some information gathered from Altaf's cafe that we improvised a plan for the next day (but wait your dear friend Google cannot be much of a help due to poor cellular network!!). The preliminary information that we had was that there was a village Vellagavi, 8 kms from Dolphin's nose and to reach Kumbakarai waterfalls we had to trek further 8 kms which meant a total 16 km downhill trek. Ignorant, enthusiastic us thought the task was no big big deal and started off at about 8 a.m. from Dolphin's nose. The views were overtly beautiful and the feeling overwhelming. We did not waste much time clicking photographs as we had set a time frame and wanted to abide by it. But what you see and the enormous silence that you experience broken only by the chirping and buzzing of the fauna is breathtaking! On our way down to the village, we met a few villagers which trust me is like a confidence booster when you are in for an unknown adventure like this. The road down to the village was varied, beginning with a stair-like arrangement of the roots of the trees, to muddy terrains and narrow paths with loose gravels. For city dwellers like us, so much wilderness with different species of mushrooms and pines and orchids is mesmerizing! Vellagavi is situated on a different range and after a long downhill trek, you have to trek uphill, which was a relief at that moment as the tips of your toes start to ache with a prolonged downhill trek.

We reached Vellagavi about 11:30 a.m. in the noon as were happy that things were moving according to our schedule. A few steps into the village and you are offered homemade food and coffee (what could be better!), a few steps more and you are offered more food but this time with tea. I was however surprised when I saw color televisions in most of the homes (electrical communication in place but no roads!). After a small stroll through the village we started towards the other “8 km walk” towards Kumbakarai falls and this time we were walking through coffee estates. Our toes were hurting, but the occasional sound of gurgling water kept us going, but wait, the sound was misleading and we ended up near a small stream. However, we kept meeting some confidence boosters (villagers) which kept us going. The clock kept ticking, our toes continuously hurting, mosquitoes feeding on our tired blood and we kept climbing down and down (from probably one hill to another). Suddenly, we realized the sun would be down soon, and there was no sign of any more confidence boosters and we had walked more than 8 km but reached nowhere near any waterfall!

Luckily (or unluckily) we got some internet connection and tried to google our way. It may sound foolish here but when you realize you are in the middle of nowhere and panic sets in, one tries to avail any small help that is available. At that point google maps says 1 hour more to go and we picked up ourselves again and walked and felt little positive when we realized we had reached the base of a mountain and were walking on a flat road and could hear a faint sound of a motor. Soon we saw some seating arrangements, biscuit packets (littering can be useful at times!) and boosted ourselves that we are on the right track. But wait, the walk on the flat road was endless and to add to it our GPS says you have reached your destination, when you see no destination! It is four p.m., panic sets in and to complicate things the otherwise one way route till now breaks into two: one closer to a building without a clearly paved path and the other away from the building with a clear man-made path. No points for guessing, we chose the well-defined path and a short walk and we are hindered by a stream. At this point Google says Kumbakarai district 4.1 km! We were clueless, we were sure we had walked more than 10 km and 4 km more to walk (the maths was not matching!) Exhausted we sat down by the stream and one of the guys of our group went to look for the other route and came back with a bunch of hooligans! Deep forest, a bunch of rowdy boys who outnumbered the guys in our group and the sun is about to set, I cannot think of a more nerve racking situation I have experienced in the near future! But one among those proved to be our saviour and suggested we go through the other path. He also gave some other information but the huge language barrier (larger than the mountains!) between us complicated the situation. But what relieved us was he said that we would reach a main road following that route! A small walk the other way and we saw more people and more decent people and heaved a sigh of relief until we realized we had entered a protected area and the gates to the exit were about to get closed. Somehow, our stars were in our favor (I don’t know what better to say!) and a couple who worked in the reserved forest helped us out and agreed to drop us at the nearest bus station. Ah, but wait Pandora had more troubles stored in her box, as on our way to the bus station, an official from the forest called the couple and asked us to pay 1000 bucks as a penalty for having illegally entered a protected area.

Nevertheless, that return journey from Perumalmalai to Batalagundu to Kodaikanal to Vattakanal will be etched in our memories for a long long time. I do not mean to discourage anyone as the verdant jungles are worth a visit BUT my suggestion to those planning for a similar trek, go with some trekking group or a local person who are sure with the path to be taken because even today as we are back to our regular humdrum of life and look back at our expedition, we could not figure out went wrong in the route (as we followed the paths mountain offered us!) and the shocking part was there was not even a single hoarding mentioning “protected area”, so you can never realize when you enter the “en”dangered zone (Palani wildlife sanctuary)! Later we also found out that the region is the home to leopards and various snakes (who fortunately did not visit us!) and the total trekking distance is way beyond 16 km (still unsure of the total distance!).

However, all is well that ends with a smile and truly none of the sunrise, scenery and waterfalls can match the beauty of the smiles of safety we had on our faces because that is what will drive us towards our next venture!