The very name of Coral Island meant that there was scomething special planned. Our guide mentioned casually that there were quite a few activities we could participate in, such as parasailing, snorkelling, banana boat ride and the water-biking. I was more than thrilled when we heard that we would be going there via motor boat. I had absolutely no idea how interesting my adventure was going to be. 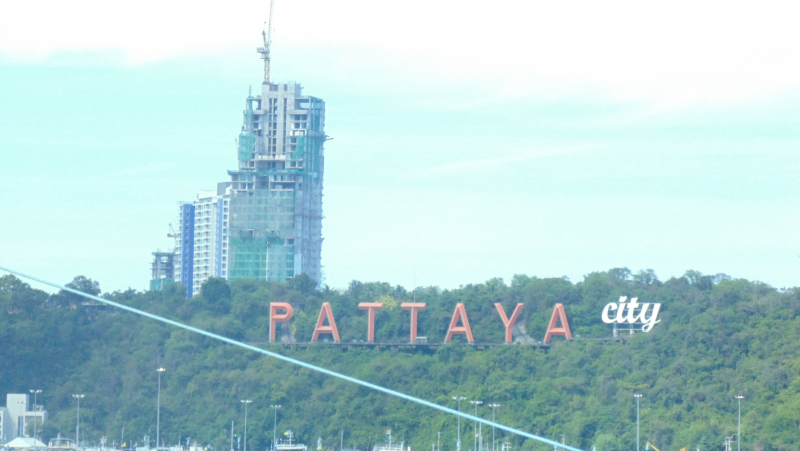 We had to walk a little on the beach to the place the boat was anchored. My grandma had the toughest time of all - she wore a saree for the adventure. I was more than impressed by the energy with which she approached every part of the trip. Her fearlessness amazed me as she is over 70 and suffered from pain due to non-stop walking in the past few days. Coming back to the motorboat ride, it was a task boarding the boat as it bobbed up and down with the waves. Once on it, we sped to the first check point - the parasailing platform.

It journey was very bumpy. Even more so for the three of us (my sister, cousin and I) as we were sitting in the very front of the boat, where the effect of bumps was the greatest. The bobbing of the boat was now replaced by jumps, and we held on tightly for we feared the possibility of getting injured, or worse, being tossed out. In a matter of minutes we could see huge colourful parachutes filling the sky. I was thrilled by just looking at them and was more-or-less tempted to give it a shot. I realised what we had gotten into when I understood how we were to alight the motorboat. Even though it was tied to the platform the boat rose and fell with the rough waves. I was seriously worried now.

Somehow all 11 of us made it to the platform unhurt. Following my sister, my cousin started showing special interest in parasailing (Her grandparents were really apprehensive about letting her go for it). Their interest was pretty contagious, because three of us (my parents and I) queued up for the experience as well. I remember being harnessed and buckled to the parachute. On being given an option about taking a dip in the water my sister went for it, while I instantly refused. 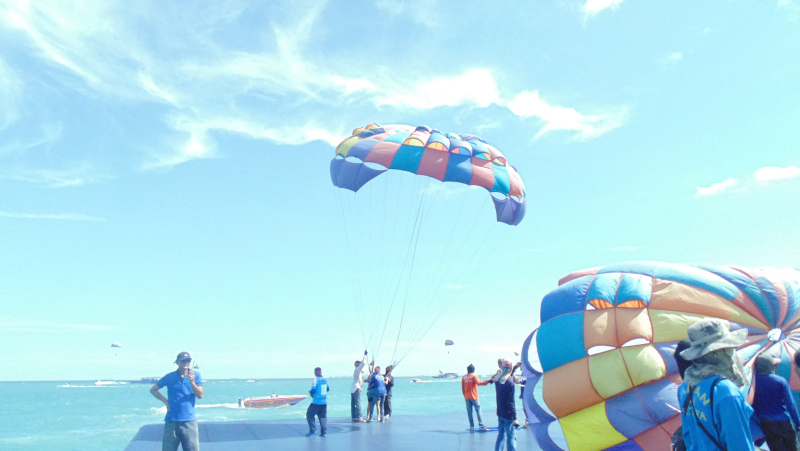 The area from where we "took off" was very hot - standing in one place for more than a second was out of the question. That, in addition to my harness (which made it very difficult for me to stand upright) made me walk in a weird way. I threw a last look at the place where my grandparents were seated, only to see my grandma frantically praying for our safety.

I was told to run until the edge of the platform and that the motor boar attached would do the rest. The only sense of fear I felt was the split-second my feet left the ground. The rest of it was really fun. I rose high in the air as the motorboat picked up speed. Thanks to the harness, I almost felt like I was sitting mid-air. The force of the wind made the experience all the more fun. It felt unreally good, as I saw the platform shrink. I screamed in delight! The best part about the experience was the view. It was so awesome that it felt unreal. The only thing that they could have improved was the duration of the ride. By the time I really started enjoying the scenery the speed of the boat started decreasing and I began losing altitude. In a matter of seconds I landed on the platform, and saw my parents get ready for their share of experience.

Finally, after convincing her grandparents somehow, my cousin got prepped for her take-off. We expected my cousin to go with a helper, but she went solo (we noticed that only at the time of her landing!). Our guide led us to another boat which would take us to the next platform, this time for the snorkelling experience. I was now more worried, as my grandparents would have to endure another dose of getting on and off the motor boat.

We made it to the next platform after a decent amount of struggle. I was thrilled and scared at the same time. Like parasailing, I didn't really know procedure when I would get an opportunity like this again. After deciding and deliberating for a while we decided to take the plunge. My sister and my cousin joined me in the adventure.

Soon after the payment, our shoes were collected and placed in a basket and we were led to the region of the boat having all the snorkelling equipment. There was a Tamilian family with us, all set for the experience. After handing us a strip of chewing gum the organiser explained in detail about the procedure, equipment and the rules we were supposed to follow, along with some symbols to help communicating underwater. He gave us a glove for the right hand and explained to us how to relieve the pain in the ears once we were inside. The most crucial part of the experience were the first 30 seconds of complete uneasiness. If we can handle that, we would be comfortable for the remainder of the experience. The other family, too shaken by just listening to the protocol, decided to back out. I just gave my grandmother a quick glance before going in. Her face had even more signs of worry now.

I was the last one in. Within a matter of seconds we had five metres of water above us. The uneasiness was increasing by the second. It may sound ridiculous, but for a while I had this dreadful feeling that I wouldn't make it out alive. I decided to block out that feeling and try to enjoy it one step at a time. The sea was rough and the visibility was poor. I started singing and that actually made me feel better.

I could barely see a metre ahead of me. We held hands and formed a circle, and that is when the u experience began. We were given slices of bread to feed the fish at the reef, with strict instructions to feed the fish with the gloved hand only. I felt a funny sensation in my hand as the fish flocked to the bread it clenched. It was the first time that I actually touched fish!

After walking a few metres we could see the corals. The underwater "guide" gave us a polyp to touch. It was the softest thing I ever touched. The whole experience was more or less what I had imagined it to be. It was like a dream come true. We touched an oyster, before being given bread again to feed the fish. We then were thrust upwards, back to the rest of our species.

Although both experiences - parasailing and snorkelling may have caused my grandparents an insane amount of anxiety, I think it was well worth it. I flew with the wind and conquered my fear of water barely within a couple of hours. It was an enriching experience and helped me emerge as a richer person (obviously not monetarily). I couldn't have asked for more.