On the Inca trail - Machu Pichhu and Cusco City

Machu Pichhu, the name resonates with mystery, intrigue and of course one of the new Seven Wonders of the modern world. Machu Pichhu in the native quechua language means “old mountain”. For me, it was the journey of a lifetime and a dream travel destination that was long awaited. Machu Picchu is today the top tourist destination in South America attracting global tourists. However few Indian tourists visit this place perhaps due to the long distance involved or lack of awareness.

The train from Cusco to Machu Pichhu by Peru Rail is perhaps one of the most beautiful train journeys in the world. This luxury air-conditioned train has wide windows and large part of the ceiling is covered by glass, which offers a magnificent view of the Andes mountain range and the gentle river flowing besides the tracks. The train journey lasts about 3.5 hours covering a distance of 120 kms and the passengers are kept well informed on the public address system about various sites on the way while being served snacks and drinks. The train passes through lush green fields, colorful villages in the foothills of the Andesand extensive areas of terracing dotted with the ruins of Inca fortresses. 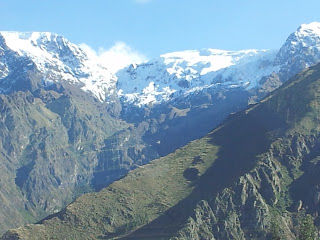 After reaching Aguas Calientes, we need to take a bus ride lasting about 20minutes to reach the ancient site of Machu Pichhu The bus ride itself is spectacular as the narrow track winds its way up the mountainside The scenery is lush cloud forest with great views of the sacred mountain. 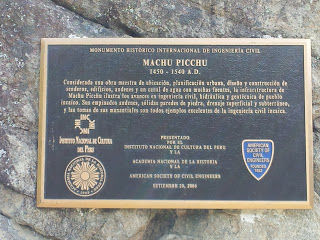 On reaching the top, the friendly staff at the tourist desk hand over a navigation map of the site and also offer guide service for a fee. I was accompanied by my Peruvian friend, who had earlier been to Machu Pichhu couple of times and offered to be my guide. I also got my passport stamped with the name “Machu Pichhu” asa souvenir. The air is really thin at the top and care needs to be taken not to over exert. Fortunately the weather was extremely sunny and pleasant that day (20 degrees Celsius),which is a rarity. Maybe we were blessed by the Sun God that day. Located about 2.400 meters above sea level on a small hilltop between the Andes mountain Range, the mystical city soars above the Urabamba Valley below. Built by the Inca Kings, this majestic structure was considered a lost city until it was discovered in 1911 by an American archaeologist named Hiram Bingham and later declared a UNESCO World Heritage site in 1983. It was estimated that approximately 1,200 people could have lived in the area, though many say it was most likely used as a retreat for Inca rulers. Due to it’s isolation from the rest of Peru,living in the area full time would require traveling great distances just to reach the nearest village. Since majority of the Incan population lived in and around the Andes Mountains, cities like Machu Picchu were generally reserved for those of a more rich and noble blood. It still remains a mystery as to how and why this ancient city fell. Was it war, earthquake, smallpox or the ruthless Spanish invasion? However the Spanish invaders did not know about Machu Pichhu although they controlled the majority of Inca Empire settlements, including nearby Cusco. Had they known about this site, when they arrived in the 1500's, Machu Picchu would probably have been lost to the world as local people say. As local history goes, Machu Picchuwas probably built around the year 1450 AD, and it only thrived for approximately 100 years. Once abandoned, the site survived only within the knowledge of locals who knew about its existence. Machu Picchu would live in lore until its rediscovery in 1911 by Hiram, who was exploring the area when he found the ruins with the help of a local farmer. Coincidentally Bingham found thousands of Inca artifacts upon his discovery of the ruins which are now housed at a museum in Cusco. Due to the fact that it had remained in obscurity for hundreds of years, Machu Picchu has been preserved and appears today much like it would have during its heyday. Among the most impressive characteristics of Machu Picchu is the technique that was employed to build it. It is still a general mystery as to how the In camanaged to move the large rocks that they used to construct the city,especially when you consider how it is perched almost precariously over the Urubamba River valley. You will likely stand in awe upon examining how these rocks were so expertly joined without the use of cement. The rocks of Machu Picchu were painstakingly carved until they perfectly fit the stones around them. Since the timing of my visit coincided with the Inti Raymi or Sun God festival celebrated on June 22nd (shortest day of the year in the southern hemisphere), the period is considered very high season. There were lot of tourists especially from US, Japan and Europe. I could sight one lone Indian couple from Hyderabad in the crowd of about 2,500 visitors which is the maximum allowed in a day bythe Peruvian Government. The adventurous tourists take the Inca trail to Machu Pichhu that lasts 2 to 4 days of trekking. Some even scale the nearby mountain called Waynapicchu located quite a distance from the main site. At Machu Pichhu one can visit three primary structures i.e. Intihuatana (Hitchingpost of the Sun), the Temple of the Sun, and the Room of the Three Windows. We used the route map to cover these places as well as Astronomical observatory, Temple of the Condor (bird worshipped by the Incas) and the fountains. I was amazed to see a rock resembling a sun dial perhaps used as a clock those days; vessel like objects and the huge condor bird carved in stone. The Temple of Sun God is prohibited to the visitors as reconstruction activity is still going on. The site is secured by guards posted all over the place, perhaps to ensure safety of this marvelous structure. The stepped terraces apparently used for agriculture is really intriguing and I could sight few llamas (National animal of Peru)grazing on the lush green grass. Close to the Astronomical observatory, there are orchids and trees with beautiful flowers, which are soothing to the eyes.It takes about 3 hours to see the entire site of Machu Pichhu and those interested in archaeology could perhaps spend an entire day. Thanks to the lovely weather, we were not tired even after 3 hours of hard trekking. Since no food is allowed within the premises we had to go back to Aguas Calientes for lunch followed by shopping for souvenirs to take back memories of Machu Pichhu. There are plenty of restaurants that serve all kind of cuisines but I settled down for a local Peruvian restaurant. The trip back to Cusco left me with profound memories of this great wonder and i tremains even after I landed in India.It’s a mysterious location, which leaves lot of questions unanswered even to this date. A must see location for those who love adventure and want to be left intrigued for years to come. 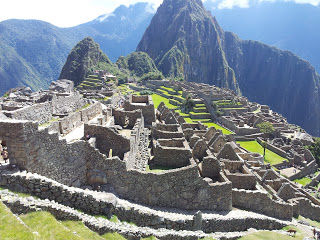 Located at an altitude of over 11,000 feet in the heart of the Andes mountains, is the dynamic and historic city of Cusco Peru. Cusco with a population of about 0.4 million is also called the archaeological capital of South America since it is the famed capital of the ancient Inca Empire and it has served as a travelers’ mecca for hundreds of years. Though Cusco was the center of the Inca Empire for are relatively short time, relics and imprints from the great civilization remain to this day. When you visit Cusco, you feel as if you’ve been transported to another dimension of sorts. Perhaps that is partly due to the altitude’s effect on your body and mind. If you are flying here and haven’t yet adjusted to the Andes Mountains, prepare to spend the better part of your first day simply lounging around or lying in bed with altitude sickness. While that seems wholly un-charming, there are natural means by which to ease your symptoms, like chewing coca leaves or drinking coca tea. The baroque main cathedral in the central tourist gathering spot of the Plaza de Armas is one of Cusco’s most impressive architectural structures. But perhaps even more fascinating when it comes to Cusco architecture are the surviving walls from the Inca. These walls were, and are, so strong that the Spanish often chose to simply build on top of them instead of destroying them. As if the stone streets and the city’s “living museum” feel were not enough, seeing these hundreds of years old stone walls as you make your way about town is truly a treat. Cusco Peru is a city that is perfect for travelers since it is a jump-off point for excursions on the Inca trail and to nearby Machu Pichhu. Many people will stop here before heading to Machu Picchu, or to other points of interest located within Peru’s Sacred Valley. Cusco is a busy city, thriving in fact, and traffic can be a hassle to negotiate. Just make sure to politely ask before taking pictures of the local and indigenous people, as well as offer a small and modest monetary gift. The friendly nature and disposition of the indigenous population in Cusco will surely make a mark on your soul that you will carry with you for life. Shopping in Cusco is a joy and you can taste local delicacies like roasted guinea pig. I visited the local bazaar to shop for souvenirs and bought a "pancho" similar to the Indian shawl worn by the local men and women. We travelled to Cusco in the midst of the Inti Rayma or Sun God festival, which is the most important Andean festival. The Inca cultures celebrate this festival from June 16th to 24th (shortest day in the Southern hemisphere). The festival travels from the ancient capital of the Inca Empire, Cusco to the massive fortress of Saqsayhuaman. The festival includes fire and lights to wake the sun god on the shortest day and longest night of the winter. The Sun, the main God of the Inca Civilization was considered to be the creator of all that exists. The festival lasts 9 days of colorful dances and processions, as well as animal sacrifices to ensure a good cropping season. The celebrants fasted for days before the event, refrained from physical pleasures and presented gifts to the Inca, who in return put on a lavish banquet of meat, corn bread, Chicha and coca tea as they prepared to sacrifice llamas to ensure good crops and fertile fields. The dance ritual happened all through the day and night and I soaked in the festivity just like 200 thousand other visitors. It was indeed a heavenly experience. 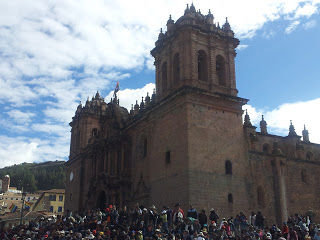 But thanks to the super hit film “Robot”, in which Rajnikanth shakes a leg with Aishwarya Rai on top of Machu Pichhu for a popular song inappropriately titled“Kilimanjaro”, Indians have started to realize the potential of this great archaeological site. I traveled from Lima, the capital of Peru to Cusco Cityby flight. The flight lasting approximately 75 minutes offers breathtaking view of the snow capped Andes mountain range below.Once you reach Cusco, a small town located at a height of 3,400 meters above sea level, altitude sickness could take a heavy toll on human body due to lack of oxygen.

Hence the tourists are recommended to take medication to beat the sickness. I had taken adequate precaution, yet I succumbed to this sickness just after completing the city tour. Most American tourists come well prepared and stay for 3-4 days to acclimatize themselves before exploring the mystical city. There is no accommodation at Machu Pichhu except for an expensive Traveler Lodge and hence Cusco remains the base camp. Next day early morning 6 am, I had to take the luxury Train to Machu Pichhu and hence preferred to skip dinner and take adequate rest. 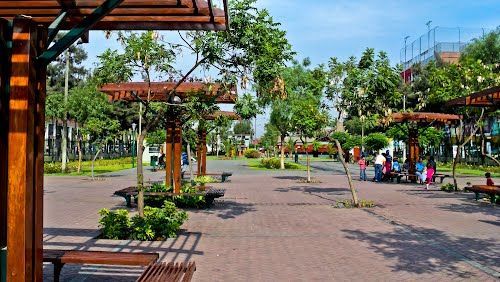