A Tourist in Hometown, rediscovering Jaipur.

The night had caved in, and as I approached the “Pride of Asia”, Raj Mandir Cinema, renowned for its intricate architecture after 4 decades into existence, a man in his fifties exclaimed, “good evening sir, which country?”. Puzzled, I stared back only to later startle his curiosity by conversing in Marwari. Perhaps it was my pale skin and a backpacker’s outlook concealing my local identity, I wondered.

It was the cold month of January and thick smog engulfed the national capital. About time to discover something new, I decided, or rather rediscover something old. It was the memory of growing up in the Pink City- Jaipur. The quest was to rediscover the loathing I had for the city which seldom fails to bewilder a tourist unaccustomed to the rich culture of Rajasthan. So I set out as a tourist in my hometown, without a slightest idea about how the next 72 hours would change almost every perspective I had about Jaipur.

Winter was at its peak, yet the sun still shone high, and it was pleasant to stroll through the streets during the day with the nights rather cold. The streets of the old, walled city, lined by small cuboids painted in red, embedded with native art, ranging from embroidered cloths to the sheen of bangles, handicrafts and Rajasthani Turbans, and finally aroma of the spices spread alongside the streets offered an enthralling spectacle for a curious mind.

After a lesson in astronomy, history proved to provide an interesting insight whilst at my next stop Hawa Mahal, the "Palace of Winds", an intimidating pyramidal, honeycombed wall, serving the purpose of a five storey high screen for the royal women, the Pardeh-Giyan or "the veiled ones". A practice that resonated between the Rajput and the Mughal courts, from the time of Akbar. The detailed latticework as it happened to be, conditioned the air, rendering the palace its name. 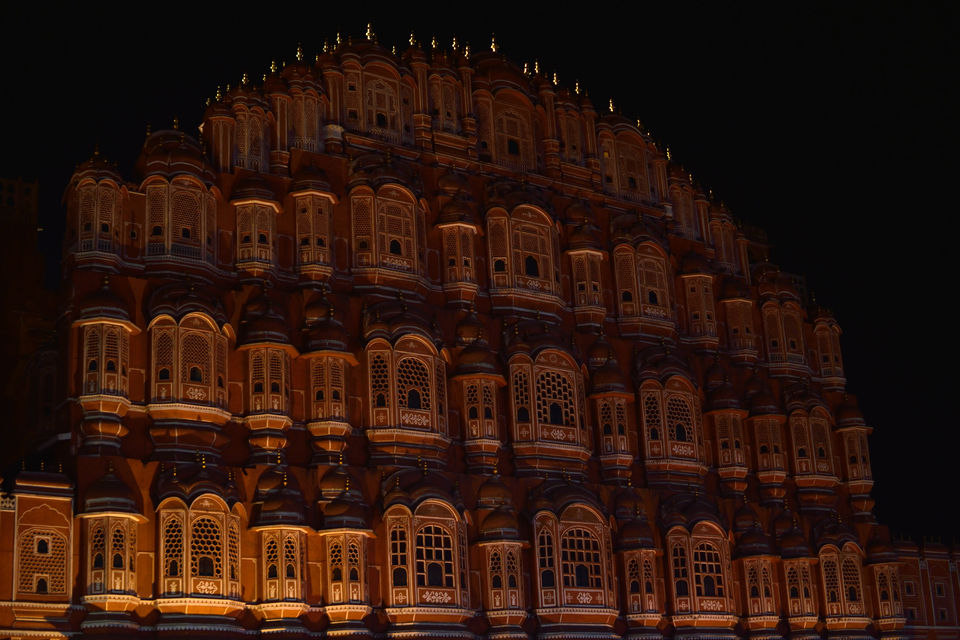 The Rajputs with their hill forts were a formidable force, but the architecture is a witness to more than just the might of the warrior clans and the customs reflect more than just the pride of the men or obscurity of the women. Amidst the vast expanse of deserts where the ever changing horizon attributed to the dunes of sand that dance like a snake on the sound of a snake charmers flute, it is a tale of perseverance to sustain in the dry. An often ignored aspect is the keenness with which the people on a whole were involved in preserving the drops of heaven that sprinkled their fields, cultivating their own gardens of heaven. And thus a multitude of water preserving structures ranging from dams, ponds, step wells, embed as jewels, not only the royal city structures but the entire state of Rajasthan.

Jal Mahal, situated in an artificial lake, created by constructing a dam. 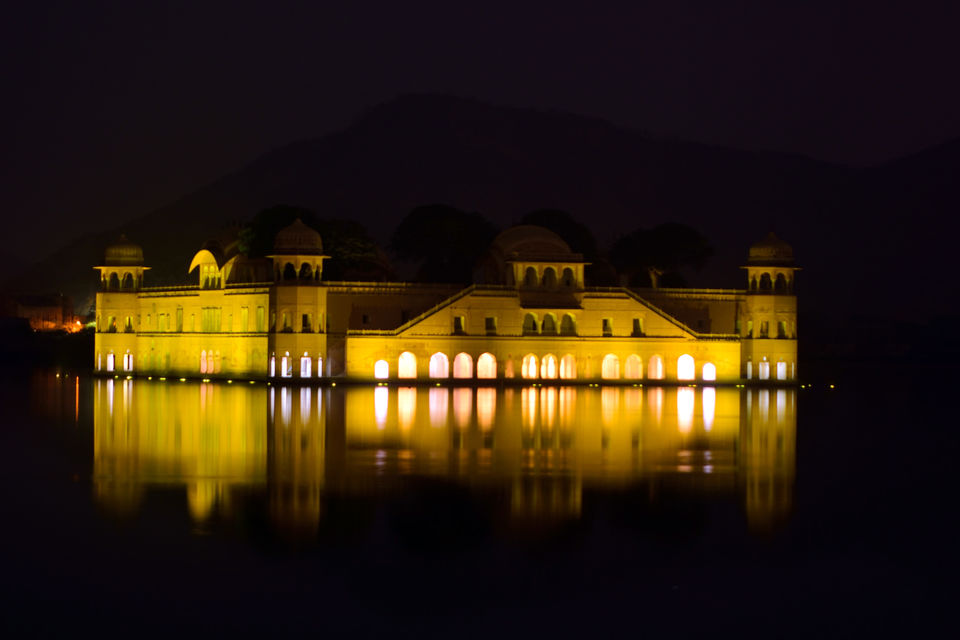 The Aravali hills, the oldest mountain range across the world were a natural cover for the royal household, residing in the beautiful hill fort of Amber, with its beautiful courtyards, palaces and gardens. The elegant glitter of one such "Sheesh Mahal", translated as the "Palace of Mirrors", never goes unnoticed. However the more intriguing part of the Amber palace complex is the layout of its gardens, in the form of "Chahar Bagh", an imitation of the Paradise Garden as described in the Holy Qur'an. Whether the Mughals borrowing the "Purdah" system from their Rajput contemporaries into their harem, or the Rajput kings replicating the Mughal "Gardens of Paradise", these monuments go a long way to depict the fusion of two distinct cultures that often began with matrimonial alliances and birth the "Hindustani" identity of the Mughal era, encompassing the North of Indian Sub-Continent. 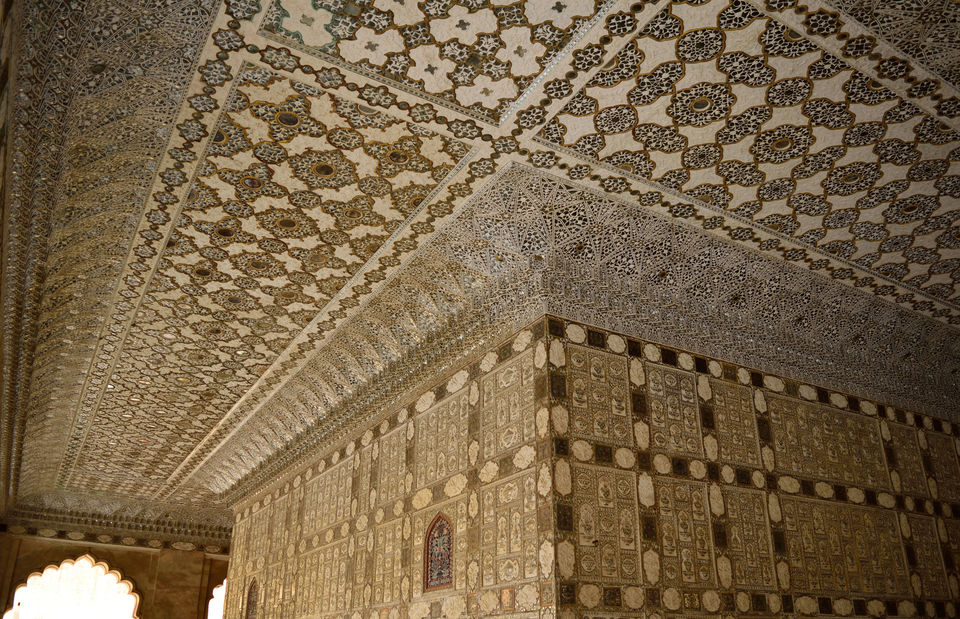 Time as it is, is of immeasurable value, and what better way to go back in time than to contemplate and try to comprehend the complex aesthetics of art, architecture and ancient science at play at the Jantar Mantar, which houses the 18th century “Vrihat Samrat Yantra” sundial, largest in the world, along with 18 other astronomical instruments, the functions of which are sure to perplex yet amaze the beholder.

The 27 m tall sundial made out of stone is largest in the world. 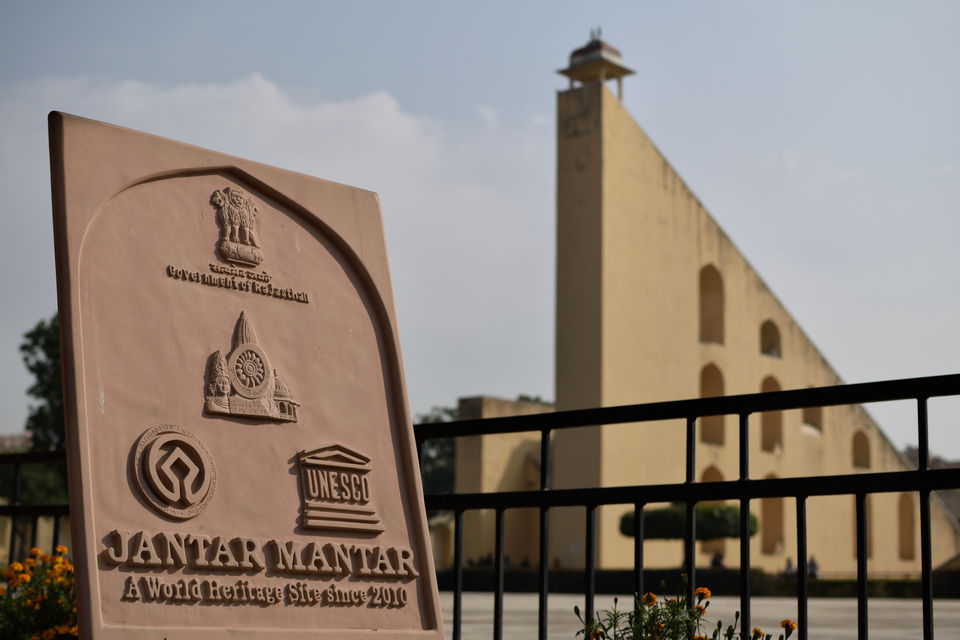 Later as I await to check in at the reception of a hotel, overlooking Brahma Kund in Pushkar, away from my home, I am told of their journey in brief, by a Dutch couple Gwen and Kevin, checking out to celebrate a year on the road by visiting the monument of love, the Taj Mahal. I sit there trying to comprehend the meaning of journey and if there ever is a beginning or an end, for 36 hours later I find myself gazing at Swargarohini peak from atop the Nag Tibba peak, with a curiosity of a toddler and a vision rid of any preconceived notions. And I wonder if "a journey is our destiny and destinations are mere gateways to a new journey, and a lifelong experience".

It is my quest to continue that experience, which was seldom fulfilled and begin anew at where I left, that is, in Pushkar, and to be able to again drown into the magnificence of the land of colors. There is no better time I believe than to be able to experience the Pushkar Mela and share it with many, to inspire and amuse.

As I linger my way out of the walled and into the new city, I find the past contrasting the future in much better light, and the memory of the past seems to disappear from the new and along with it the heritage, inherited generation after another that reflects obedience of mankind to nature rather than to mankind itself, as is in the modern world. Rediscovering the past I learn that the Jaipur that I grew up in is not the Jaipur that has been chronicled about. The "Walls" of the city and palaces alike, rather provide in abstract, a glimpse into the glorious past, where one can discover a meaning to the present and a vision for tomorrow.