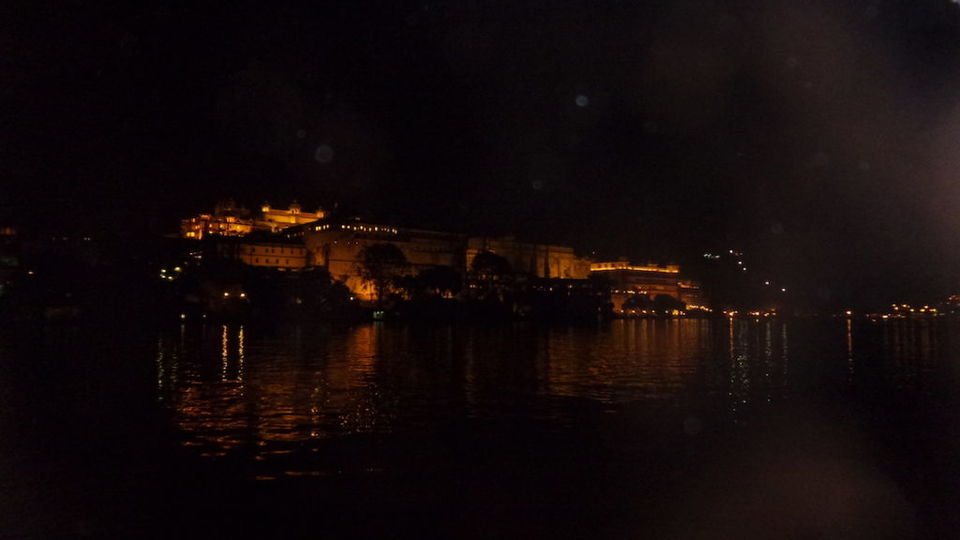 We slept in late the next day, after a long day on the road. After a leisurely breakfast of eggs, parathas, corn flakes and coffee (a bit of everything), we headed out to explore the city palace complex. The Amet Haveli is located bang in the middle of a market, with extremely narrow lanes to get to it, and I shuddered thinking about having to drive through those lanes again (the previous evening it had taken us nearly 30 minutes to navigate the 1KM stretch of that meandering lane to get to the Haveli). So, we decided to walk instead.

Ranga in her elements as she woke the next morning 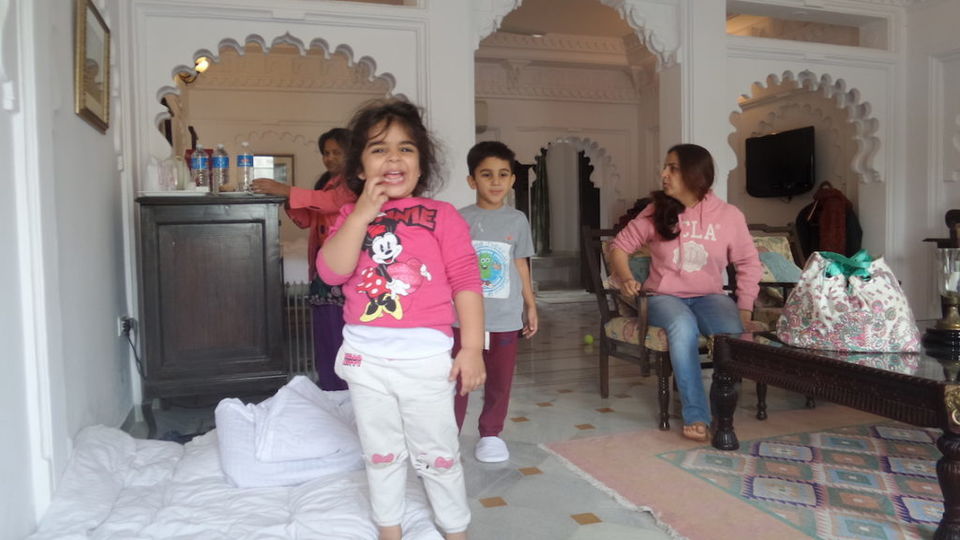 Waiting for Breakfast at the Ambrai restaurant, overlooking lake Pichhola 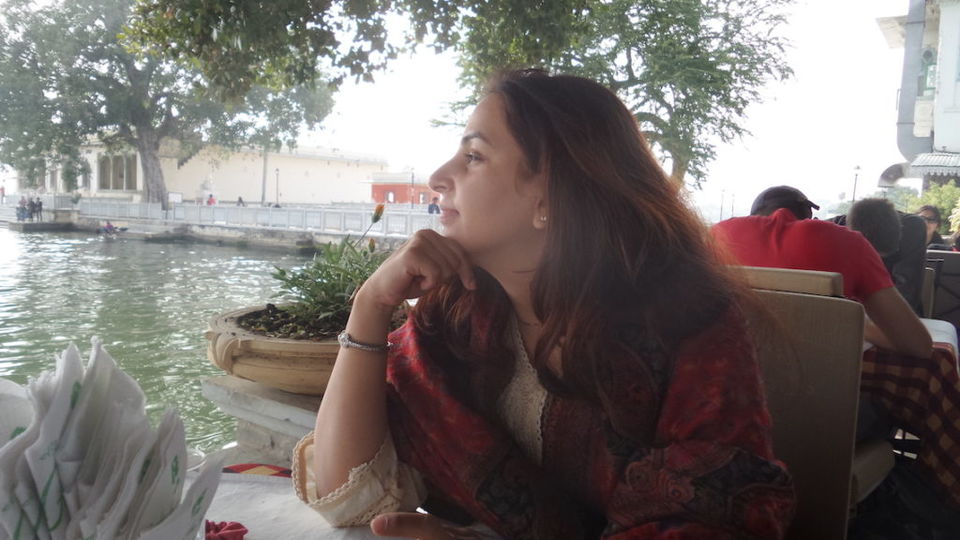 The cold December morning was brilliant to be walking in, as we navigated through the market lanes. In about 15 minutes we reached a foot - bridge to cross over to the Eastern bank of Lake Pichhola, which is where the access to the palace was. While the walk over the bridge was fun, spanning the entire length of the lake, it was sad to see garbage and other unwanted flotsam on either side of the bridge.

The city palace is much more than that - it is actually a complex of palaces along the Eastern banks of the lake. The Shiv Nivas, which is visible from Amet's Haveli is just one amongst these! So we bought our entry tickets (some RS. 20 then, which i believe is RS. 30 now), and headed in. Unfortunately there weren't any guides available (weird!), so we decided to make the best of what we had. What we could gather is that the complex of palaces were constructed over 400 years, starting from the middle of the 15th century. Apparently Akbar had made life inconvenient in the existing capital, Chittor, and so Maharana Uday Singh set up Udaipur as his new capital. Location of the new capital, and it's palaces were as advised by some hermit that he had come across during one of his hunting expeditions. Great strategists, all these hermits. Be it the the location of the fort - palace in Junagadh or the defensive merits of Udaipur, they sure knew their stuff! Maharana Uday Singh promptly shifted bag and baggage to his new capital, Udaipur, and built this magnificent city. The palace complex is breath - takingly beautiful. You can look down at the Lake Palace from the highest ramparts of the city palace, and it transports you to a bygone era. Cant help but think how cool it must've been for the Maharana to row across to the Lake Palace whenever it got uncomfortably hot (or get rowed across, as must've been more likely in his case)!

The palace complex itself is massive, and we figured it would take us the entire day to explore and do justice to it. Addy and Ranga had started to flag, and we decided to see the museum before calling it a day. The 'Zenana Mahal', or ladies palace has been converted into a museum (the one strictly 'no go' place for members of the general public during the reign of the Maharanas is now a museum for the general public! Poetic justice?), and was a pretty insightful peek into life in that era. It also has on display some arms and armaments, and in all is worth a look. Apparently, the only time Udaipur hasn't been under Rajput rule was under Maharana Pratap, who lost it to Akbar during the battle of Haldighati, only for it to be retrieved by his son from Emperor Jahangir as part of some treaty. Since then, they successfully staved off adventurous Mughals and rampaging Marathas (who kind of beggared them with their continuous wars) until the 19th century when they came under the influence of the 'Raj'. Interestingly, the entire palace complex is still retained by the descendants of the Maharana (wonder how they managed to swing that under Indira Gandhi's very nose!), and managed by an intricate web of trusts (I guess the answer to the previous question lies in the names of the trustees), and they've converted 2 of these palaces into very successful and frightfully expensive super - luxury heritage hotels, The Lake palace and the Fatehprakash Palace.

Waiting for the palace entry tickets to be bought 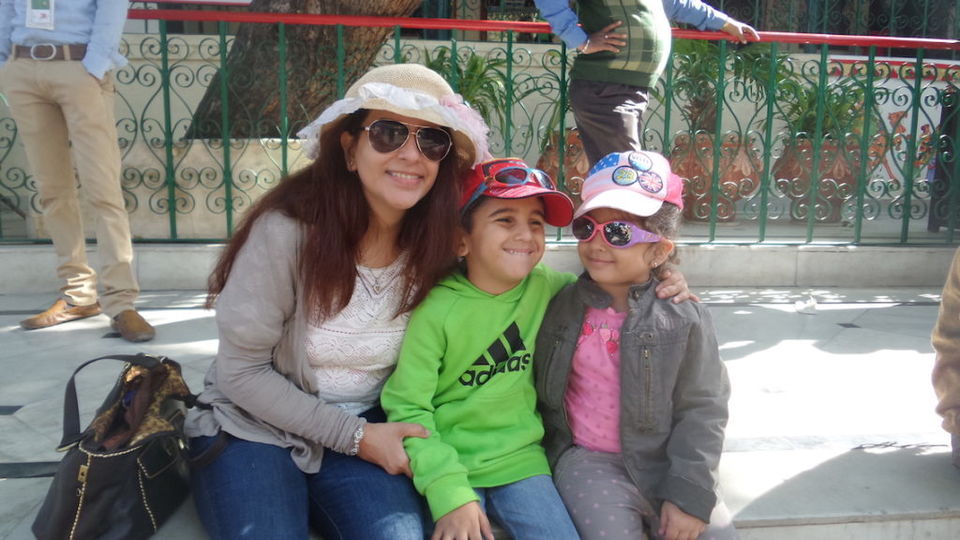 After about 3 hours, 'I haven't seen a single princess. or prince. can we leave now?' 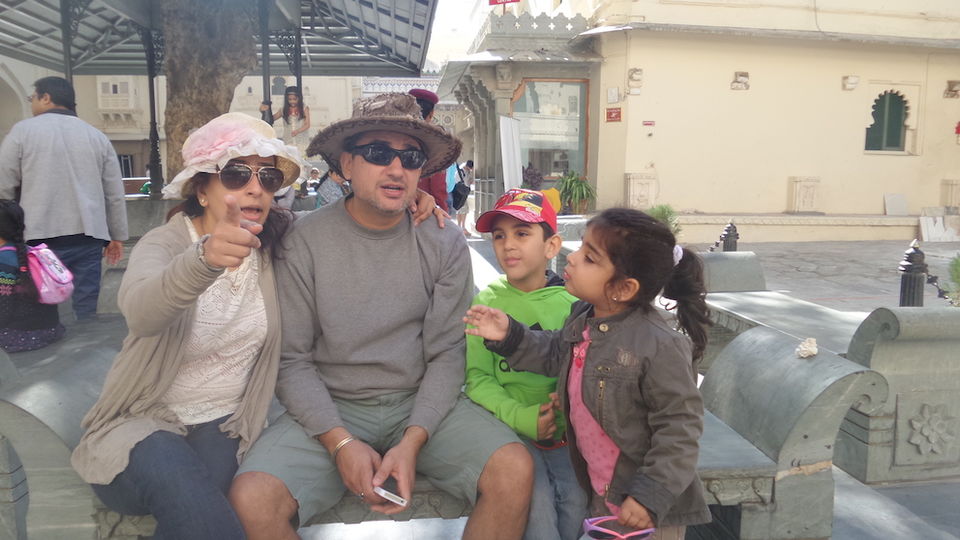 exploring the palace, we thought we'd head to the Shiv Niwas for lunch. A helpful guard told us that ONLY resident guests can use the hotel restaurant, so we trudged back to the Amet Haveli, which now took us 40 minutes, with me taking turns at carrying the kids. We had a hearty meal of wholesome Rajasthani food, including Laal Maans, and took an afternoon Constitutional, while the kids headed to pester some butterflies in the hotel gardens.

All set to leave for Fateh Sagar Lake 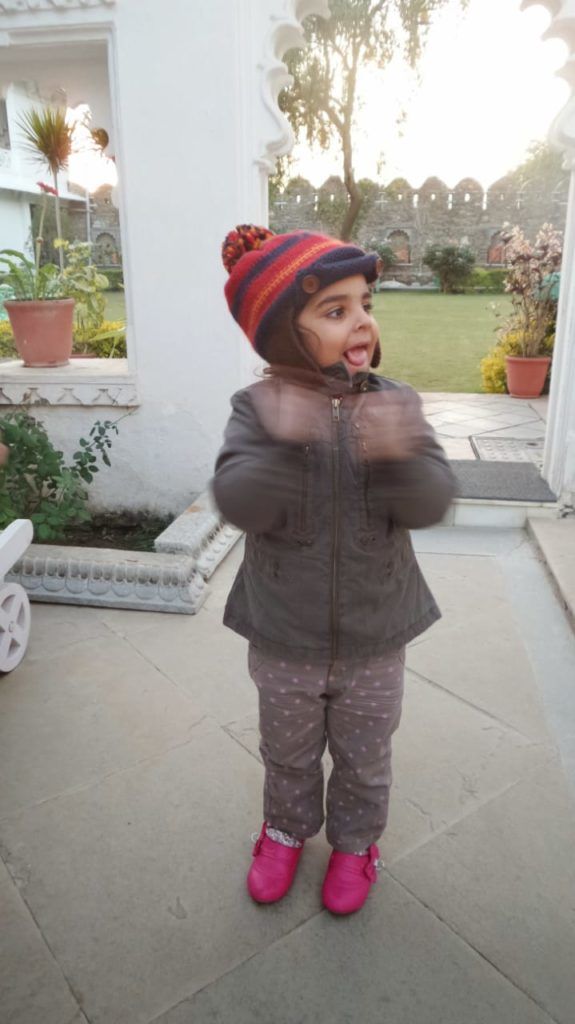 All aboard for the Fateh Sagar cruise 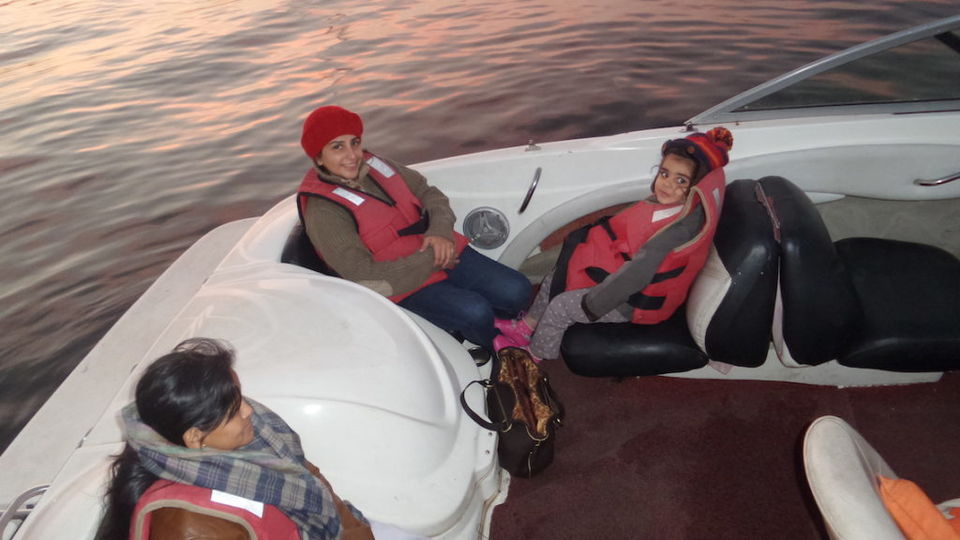 That evening, the manager of Amet Haveli advised us to check out the Fateh Sagar Lake, so we braved the narrow bylanes of the market and drove off to explore this new destination. Named after Maharana Fateh Singh, this is one of the 4 main lakes of Udaipur. It already being around 1730Hrs, we were told there wasn't enough time to explore the Nehru island or the water jet fountain, which are housed on 2 islands in the lake (there is a third island which houses the solar observatory) so we decided on a boat ride instead. After putting on stinking life - jackets, we hopped onto a motorboat that took us for a 10 minute spin on the waters. It was fun watching the kids have fun as the spray rose up in the wake of the boat, and we circumnavigated a couple of the islands. By 1930Hrs we were back at Amet Haveli, and spent a relaxed evening drinking by the windows of our room overlooking the Lake Palace and playing a game of chess, followed once again by a leisurely meal at the Ambrai restaurant (supposedly the best restaurant in the area, so why go elsewhere?). Post dinner we packed and loaded our bags in the car, in preparation for the next leg of our journey to the Himalayas - NAWALGARH in the Jhunjhunu district!

Horsing around after a long day exploring Udaipur 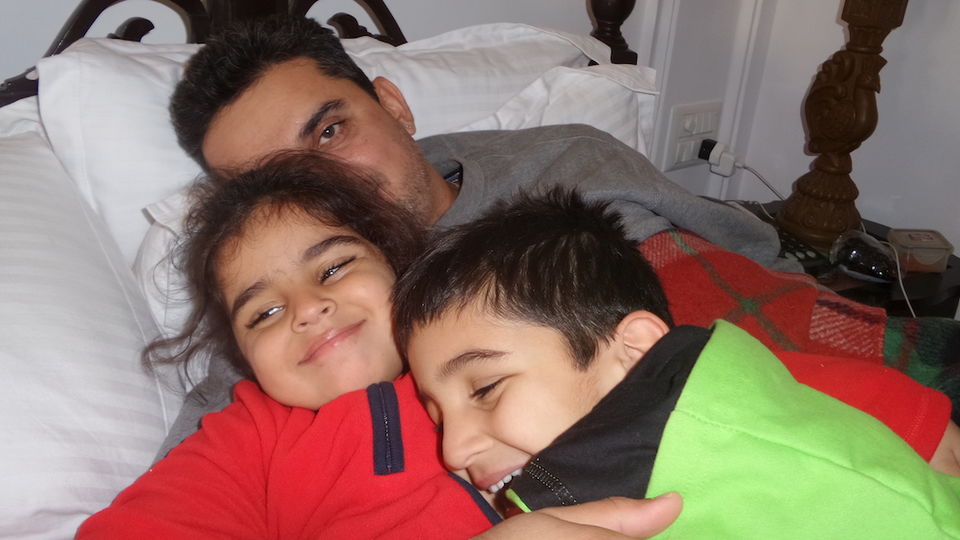 things to do in udaipur in 1 day,places to visit between udaipur and mount abu,hotels in udaipur for 3 days, udaipur trip for 3 days, budget weekend getaways to udaipur