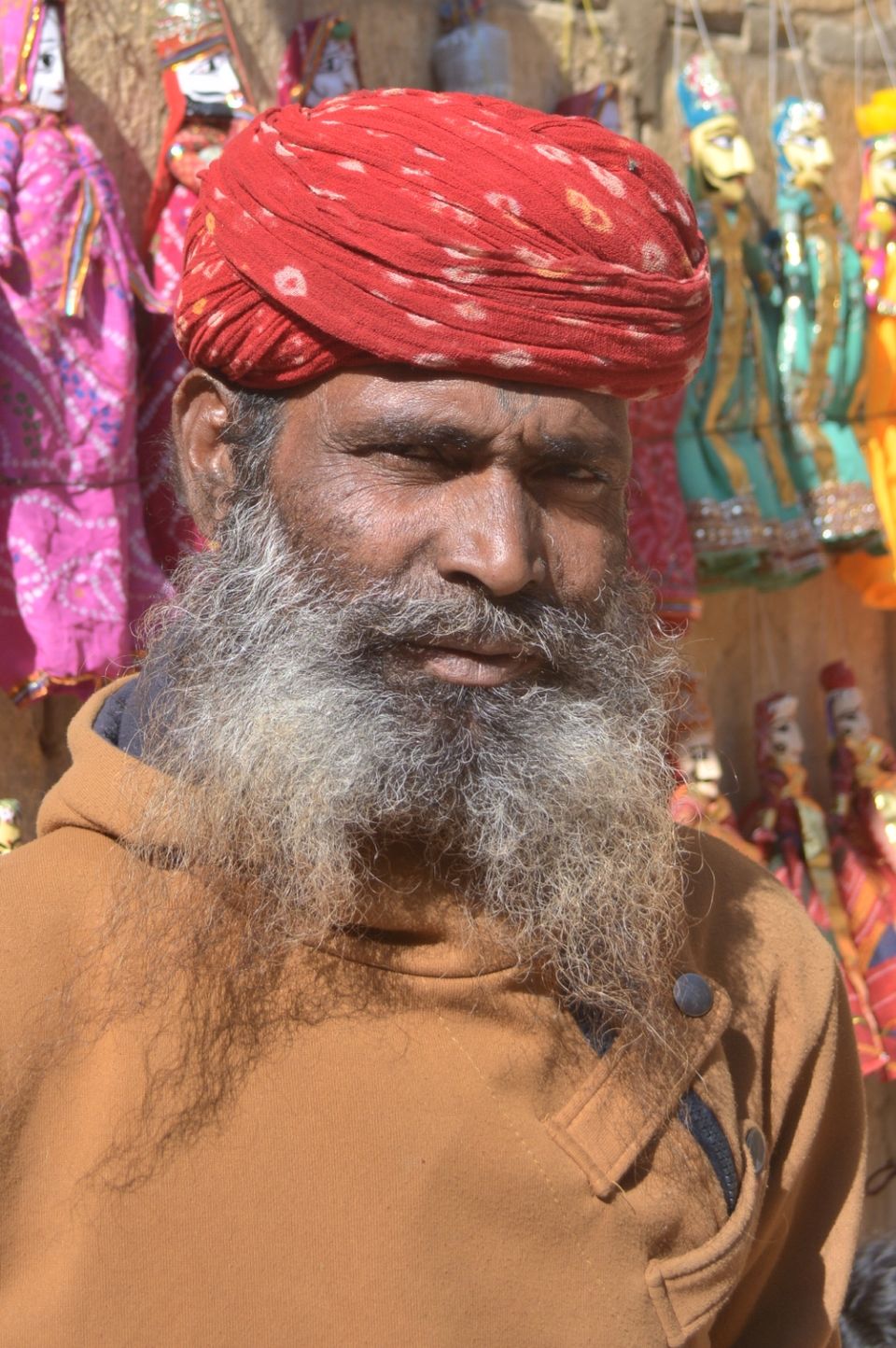 Padharo Mare Des, a song, an entreaty, a soulful rendition.. resonates from the golden dunes, echoes from the walls and ramparts of the imposing fort and from the lanes and bylanes of the city, beseeching tourists to visit this land; for this historic city with its simple people depends solely on tourism to keep the wheels of its economy churning! The living, breathing fort, its opulent havelis, the exquisite carvings in yellow sandstone peeping out from jharokhas and adorning the temples, the stark sand dunes adding a dash of adventure, lure the tourists to this city. But this is also a city fast losing its sheen in the sands of time, due to government apathy.

Born with wheels under my feet, the word travel was stamped on my horoscope, lovingly bequeathed by destiny, having my father and then my husband both in transferrable services. But Jaisalmer remained elusive for some reason and so when the opportunity presented itself I grabbed it… with five full days to soak in the city.

The tall, lean swarthy men standing proud in their colourful pagaris was just the welcome needed to the city steeped in culture and tradition, eking out a living from the art and architecture so tastefully executed by the kings and Patwas of yesteryears!

As we drive towards the guest house I think of all the places we’ve travelled, in India and abroad, and try to think why certain places appeal more than the others, and then I come to the conclusion that in these places tourism is a holistic experience which is not just confined to the fort, temple or the tourist sites but spills over to the roads, lanes and other experiences which make the stay complete; and I think that this is one area we seriously need to work on if we want to compliment the grandiose works initiated by the past kings! And as if on cue, the windmills with their huge rotating blades against the tranquil blue skies fill the landscape… what a perfect blend of the modern and historical!

A short rest at the army guest house and we are ready with our cameras to explore the rich canvass of history, art and architecture that Jaisalmer has to offer. The first day’s itinerary includes a visit to Bada Bagh, onwards 20km to Kuldhara and then spend the time at the Sam Sand Dunes. And we are not disappointed; the royals of the times gone by, the private initiative of today and the local artists all come together to charm you and make you fall in love with the place and its simple folks.

Our very first stop brings out the splendour of the bygone era in all its glory! standing atop a rocky hill, against the backdrop of a mango grove was how we caught the first glimpse of Bada Bagh; so ethereal was the complex that even the rays of the setting sun seemed to linger and caress the beautiful workmanship as if paying a tribute to the craftsmen who seemed to have put their heart and soul into the structures, chiselling away on the outskirts of the city with just their passion for company! The yellow sandstone glowed like burnished gold, the graceful chhatris proudly holding the remains of the erstwhile kings, the Maharawals of Jaisalmer within their warm embrace.

The fluid grace of the structures leaves me awestruck as I disembark from the jeep, eager for a closer look and for any information I can glean. I draw a blank on the latter, as also the search for a guide, and decide to unravel what information I can on my own ….

The first few moments are just spent in admiring the structures and taking pictures when out of nowhere there materializes a person who assures us that he is a guide.

Well, knowing we don’t have much choice we decide to avail his services as he takes us around, telling proudly how the complex has been the setting of some famous song sequences from movies like hum dil de chuke sanam…and it's not difficult to guess why!

To meet the need of water of the parched desert city, Maharaja Jai Singh commissioned a dam to create a water tank in the 16th century, turning the area green, and his son Lunkaran carried forward this legacy by building a beautiful garden next to the lake. It was Lunkaran who built a chhatri or cenotaph for his father, a tradition which continued for all the kings and queens, the size of the chhatri being proportional to the power and popularity of the king or queen. The last chhatri was that of Maharaja Jawahar Singh, but before it could be completed his son died; considering it as a bad omen the tradition of constructing the chhatrisfor the Bhatti kings was discontinued.

This information was corroborated by various accounts later on, but his knowledge of the inscriptions and images on marble slabs inside the cenotaphs was at best sketchy and vague. He proved to be a digital wizard, filming a video of us walking against the backdrop of the revolving windmills set to the beats of the popular Rajasthani folk song, and seemed to know the exact spots where the pictures would look the best!

Probably he was smart enough to know that people today were less keen on history and keener on creating their own imprints on the digital media to be flashed on various social platforms!

Kuldhara, our next stop, was another story altogether, epitomizing valour, pride, living and dying for honour, of the Paliwal Brahmins who lived here for more than seven centuries! It is the story of a village whose inhabitants decided to abandon their well-settled homes, rather than acquiesce to the desires of Salim Khan, the evil Minister who had an eye for the daughter of the village headman, the story of a village cursed by the fleeing residents to be never inhabited again! That more than two centuries have gone by, and no effort was made to settle the village, is proof enough that people took this curse seriously! Well, there are other theories too, like drying up of water or earthquake.

In a city dependent on tourism for revenue, the tag of being haunted has helped attract visitors, and so it stays in place and the gates are promptly closed at 7.30 so as to not disturb the spirits! So eerie is the place that government’s efforts to develop tourist facilities here in 2015 have still not seen the light of the day and incomplete structures add to the story … As I descend the steps a sudden chill sweeps over me- is it the cold desert air or is it that I can almost feel eyes boring into my back, ensuring that no visitor dares to stay put, to disturb the ghosts and the curse of centuries!

The legend and curse of Kuldhara leave me intrigued, and a little pensive, I climb back into the vehicle to move onwards to the Sam sand dunes, a drive of almost 30km. We are greeted by the sight of brightly bedecked camels lounging outside the entrance of the desert camp` and the manager who meets at the gate courteously explains that our tickets cover a jeep safari, followed by tea, camel safari and then the cultural programme, accompanied with dinner.

It is getting chilly so pulling on my cap and a warm jacket around me I climb into the vehicle and take my seat at the back. As we make ourselves comfortable, the driver warns us to brace ourselves and very soon we understand why, as he takes off at breakneck speed, traversing the dunes, and we are thrown around like a sack of potatoes at the back! When my request to slow down is turned down, I decided it would be better to stand and get a better view too, and it turns out to be right. ..the beautiful sand dunes are laid out as far as eyes can see, the golden sands, the camels in the distance, an almost barren, stark and different landscape altogether…bringing us face to face with the harsh realities of the desert! However, that it is a hot tourist destination is evidenced by the broken bottles and the trash which seems a common sight at all tourist locations here! We stopped atop a dune to take pictures as numerous vehicles zip by, the sound of the squealing people revealing how much they seem to be enjoying this adventure! As the sun slowly goes down we climb back in the vehicle, for a roller coaster ride to the starting point!

Chilled and shaken to the bones we arrive at the camp and enjoy the welcome cup of tea with crisp pakoras, and having re-aligned the skeletal system we set out for the camel safari. Dressed in whites with a colourful pagari, the camel driver is an imposing figure indeed and smiles indulgently as I decide not to ride but walk with my four-legged friend and happily falls in step with me, as we set out on foot with the camel walking alongside. We strike an informative conversation on the state of things now, his children who are studying, lack of job opportunities and how tourism is the mainstay of the economy.

The camels are precious for they are the breadwinners of the family but when the going gets tough and earnings fall, it is the camel’s share which gets slashed first! I want to turn back and hug that silent, stately animal, with big, beautiful eyes, walking alongside us, and tell him I empathize with him for all that he suffers!

He takes us atop a dune where durries are spread out and you can relax with a cup of tea and watch the sun go down. Little girls decked in lehngas with big kohl-lined eyes beseech you to watch their performance and are joined by their parents and relatives who play music and sing like the little girls dance with just the right swirls and twirls, unabashed, for this is what they’ve been doing to earn their living! No one in the audience has the heart to say no when the little imps come to collect the money, and I even empty out my bag of the biscuits I was carrying, for their little brother! It’s almost dark by the time we reach and we make our way towards the stage, set out in the open and manage to get the front seats.

It is quite chilly, but all that is forgotten once the performance begins! Popular Rajasthani folk songs by accomplished singers set the pace of the evening, and as the stars fill out in the desert sky, and the moon slowly climbs up, the pace quickens, with Rajasthani folk dances and then the most exhilarating performance by an artist who has the audience gasping, enthralled and screaming for more! A male artist dressed up and performing with all the grace, poise, and elegance of a woman, titillating and vowing the audience with his charm! What a performer he turned out to be! The accompanying dinner kept the magic of the evening alive, replete with all the Rajasthani delicacies that we ate for the taste of it, despite our full stomachs!

And the magic continued the next day…. 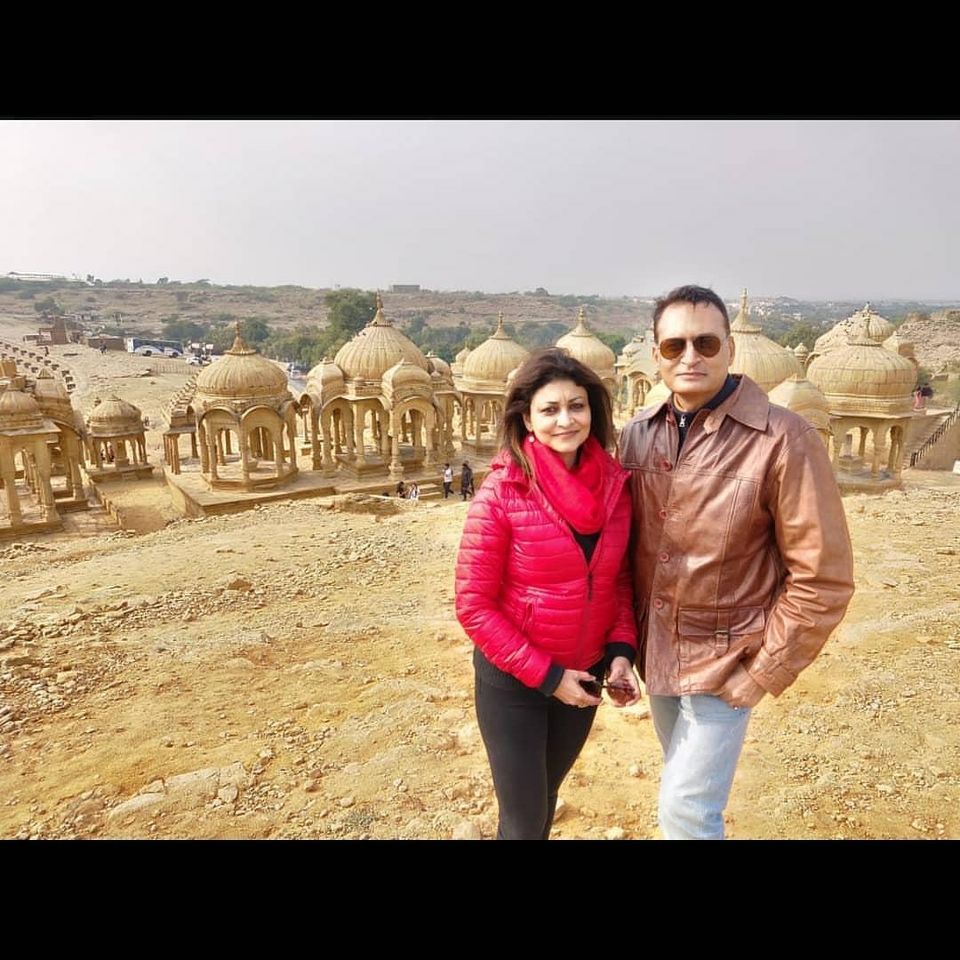 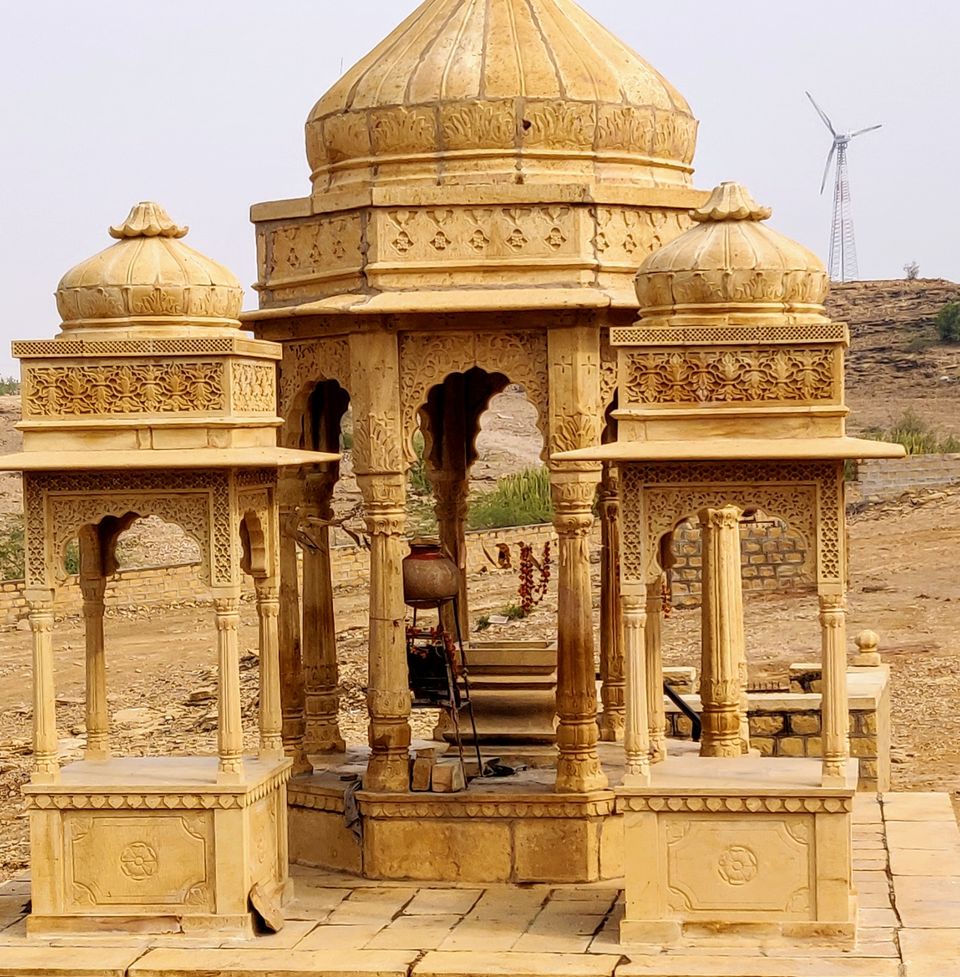 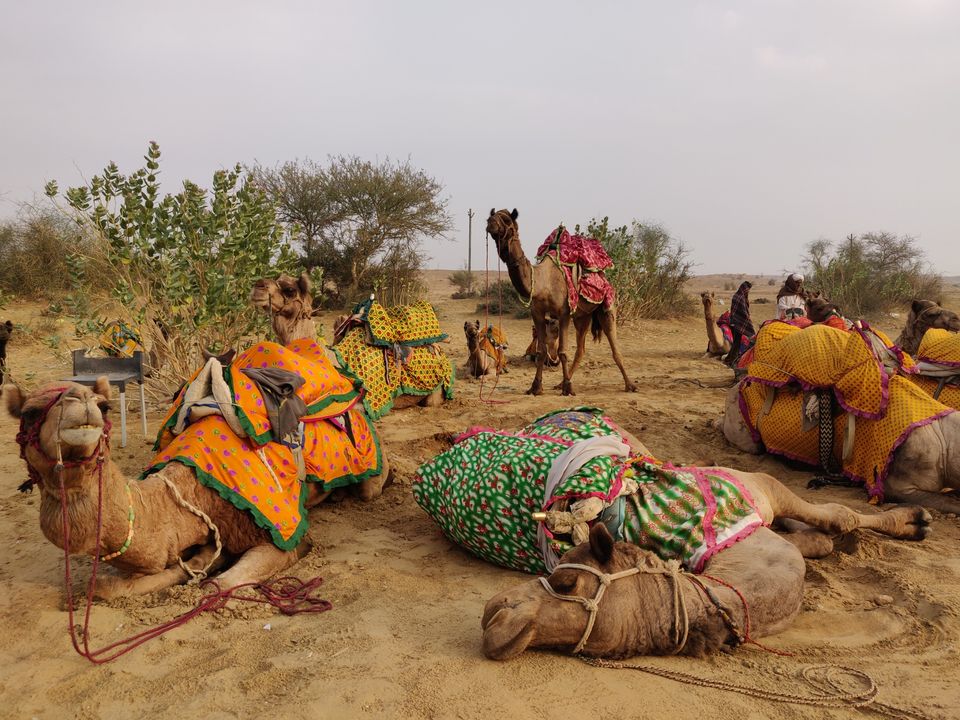 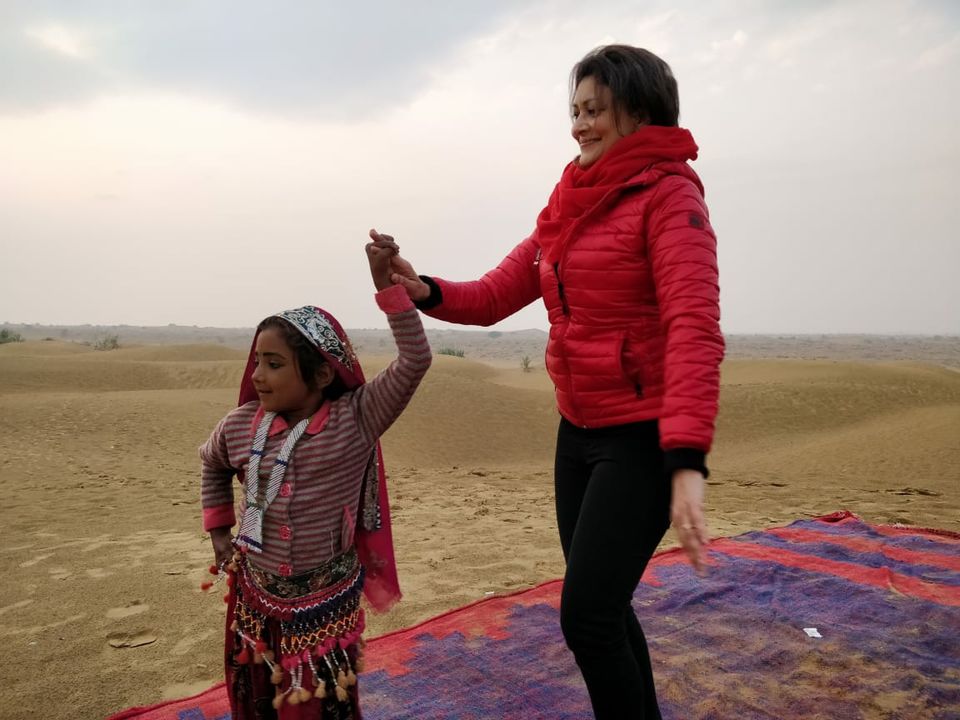 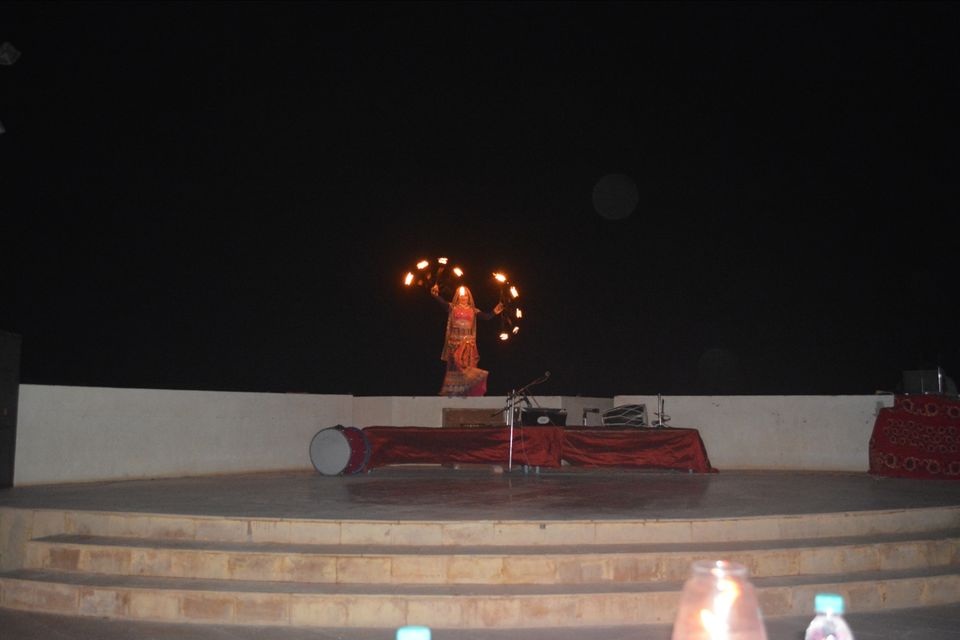