Rajasthan Travel GuideRajasthan TripsSecrets Of Ranthambore... That Locals Don'T Want You To Know

Secrets Of Ranthambore... That Locals Don't Want You To Know 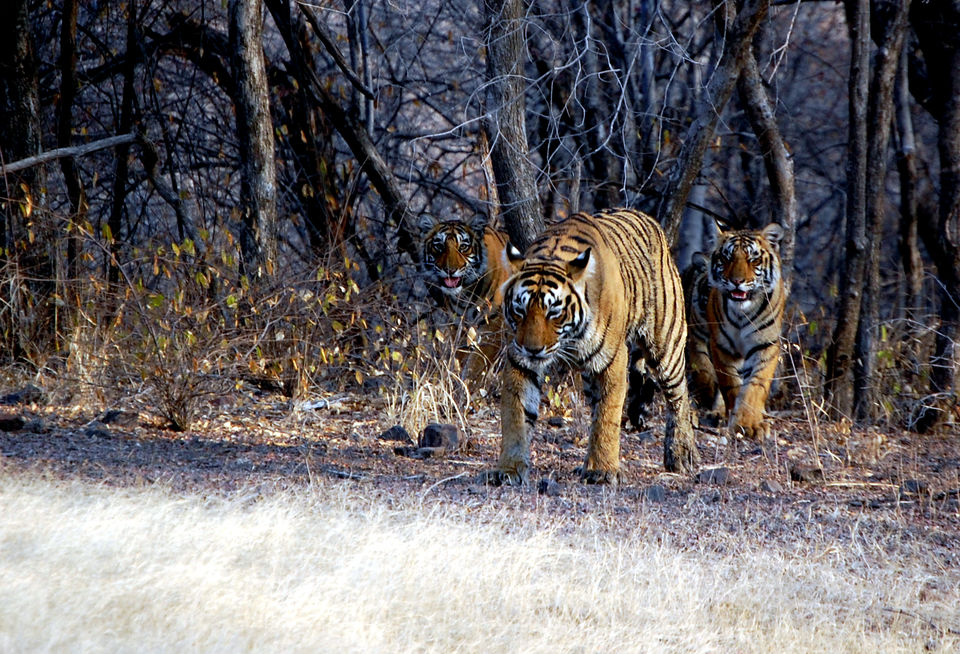 "Did you hear the call?" Arvind Meena, the naturalist asked.

The driver drove in a hurry towards the howling. I was bemused. Arvind noticed my confusion, smiled and said, "Wait".

As the car came to a stop, he explained, "Those monkeys on the trees provide aerial surveillance and the deer are the eyes on the ground. Whoever sees a tiger first, gives the warning call. Notice the four chitals sitting in four different directions? They continuously scan the surroundings for predatory movement. The herd always grazes within the radius of these four guardians."

Just as he finished explaining, a monkey gave the call from the top. A flurry of action followed in the trees as well as on the ground. All the deer ran for their lives and the monkeys jumped trees as if their lives depended on it. The area was clear within seconds. I had heard and read about symbiotic relationships in the wild but seeing it in person was a revelation. Order in the jungle, a line of communication without a language. And, this symbiotic relationship isn't limited to just the deer and the monkeys. There is a third beneficiary of this symbiosis - humans. Naturalists, guides and tourists depend on these calls to spot tigers.

Amidst all this, I also noticed an oddity. Ancient Hindu scriptures often mention the 'monkey mind' - an unsettled and restless mind like that of a monkey. Yet here in the jungle I saw fully focused monkeys concentrated on the solitary task of spotting the big cats.

The obedient children of the jungle

Tiger spotting is a matter of chance. I've seen numerous photos of tiger pugmarks on Instagram and Facebook. These photos represent disappointment more than anything else. Knowing the odds, I wasn't ripe with expectations. We waited next to a water hole because Arvind noticed some movement elsewhere and predicted that a tiger might come this way. I couldn't control my nervy excitement. I had never spotted a big cat in the wild and the thought of it gave me goosebumps. Binocs, camera and the phone were on alert. One sight please, just one sight.

I dropped all three. I lost my breath as my eyes fell on the majestic yellow coat and the prominent black stripes. Someone in the back said, "she is T-19 also known as Krishna". In that moment, I felt that the purpose of my life was served. But, I underestimated the travel gods. There were three ten-months-old cubs right behind her. They were cute and mischievous. We followed them for an hour and I carefully observed their movements, expressions and characteristics. The purity of their love and affection for their mother left me teary-eyed. This was the simple and beautiful world of the wild. And, it was the world that gave life to my dreams.

Arvind mentioned that the cubs stay with the tigress for two years after which they go their own way. During these two years whenever the tigress goes on a hunt, the cubs remain unmoved till the tigress returns. It could be sometimes three days till she comes back yet the cubs don't wander off. A prime example of obedience. The tiger sometimes comes to check on his cubs but it is always the tigress who raises them up. But, Ranthambore is the only known place in the world where a male tiger raised his cubs. T-25, also known as Zaalim, looked after his cubs after the sudden death of the tigress.

At this point, I must introduce you to the tiger preacher - Anshul Sikri. For the past 8 years, he has been going to Ranthambore National Park once every three months. He has developed a sophisticated understanding of the jungle and its inhabitants. The Ranthambore experience wouldn't have been the same without him. His conversations with Arvind revealed little-known secrets of the jungle. And, they conversed about tigers like people talk about their friends and family.

Just as we finished our lunch in the jungle, a jeep passed by and the driver told us that Arrowhead was spotted near the entrance. This confused Anshul. He said, "Arrowhead gave birth a few days ago. She should be next to her cubs. What is she doing near the entrance. She is such a careless mother. I don't think she even deserves to be a mother."

A murder mystery & the great cremation

How do you solve a murder case in the wild? And, what punishment does a tiger get for killing a human? A few years ago Ustad, a male tiger, killed a forest guard. He was banished to a zoo for his crime. Case closed. Alas, did Ustad really do it? No one is sure. Ustad was considered guilty because he had killed three people in the past. Here is the twist though. A few days prior to the killing, another male tiger Sultan was spotted in Ustad's territory. The real culprit might still be out there in the jungle.

Ustad was well-respected among the Ranthambore staff but there was another tigress who garnered unparallel love and affection. Machli - the Godmother of Ranthambore also known as 'the Tigress Queen of Ranthambore'. At present, 60 percent of Ranthambore's tiger population can be traced back to Machli. And, she defied all odds by living up to the age of 20, which made her world's oldest-surviving tigress in the wild. Park employees say that even the trees of Ranthambore cried on her death. What followed her death though was never seen before. A cremation that signified that she was one of our own.

Why Ranthambore is the best place to spot tigers

Tigers exist in various national parks, sanctuaries and tiger reserves around India. But, your best odds of spotting tigers in India are in Ranthambore National Park due to its dry deciduous forest and open grassy meadows. There is hardly any green cover making it easier to spot tigers here than in the lush green forests of other tiger reserves. The tiger numbers are also rising with current figure believed to be around 95.

How to get there: The nearest airport is Sanganer Airport in Jaipur is 180km from Ranthambore National Park. You can hire taxis from the airport to the park. The closest railway station is Sawai Madhopur Railway Station, 14km from the park.

Have you spotted tigers at Ranthambore or anywhere else? Write your own travelogue to share with millions of other travellers. And subscribe to Tripoto Youtube Channel for stunning videos.