Isn't the title filling a little pride in your heart right now? For people from Jaipur, it is! And of course, for all the Indians too, because it exists in the largest state of India, Rajasthan! Well, Jaipur always comes with a little extra and, extraordinarily, it also entertains its visitors with an elite movie experience too. I haven't heard of any largest theater in India, till I stepped into the train and looking out for places to visit in Jaipur on google. As the movie is mandatory on my birthday vacation, I have searched the best places and I got this as the main one. I just fell in love with the pictures and decided to have a movie fun in Jaipur.

I haven't visited on my birthday though, but visited the next day in the night of the last show of the Bollywood movie 'Street Dancer 3'. I could have gone to any movie, indeed, because I have visited to witness and know what specialty this movie theater got. Trust me, soon after I have entered, it was spell-bounding.

And, the interiors were not completely lit by the time I entered. I could see many tourists, localite, visitors, movie lovers, waiting for the lights to be turned on. But, it was still breathtaking. I already had the best opinion without it has completely lit. Imagine, how beautiful it was. Quite indescribable. But, I will try to give you a view of my words.

Raj Mandir, taken as a prestigious statement of Jaipur's Royalty and the reign of Rajputs and their popular royal culture and traditions, it was constructed and designed in the year 1976. Since then this place has been organizing many premiers. No wonder, it is being counted as the Largest Single Screen movie theater in India and also Asia's largest movie entertainment space.

It was really a goosebumps moment, when the lights were turned on, just before a few minutes for the show to commence. It was like standing in a Disney wonderland. You must revolve 360 degrees to feel the awesomeness of the place. The royal chandeliers, the hanging lights, the aroma, the traditional Hindu idols of Lord Ganesh, Goddess Laxmi and Goddess Saraswathi in the upper corners under the heavily lit paradises.

Like other palaces and forts of Jaipur, the premises of the Raj Mandir are also very vast and expanded to the corners. It is named after the Royalty of King's entertainment. Like how cultural events used to happen in the Diwan-i-aam and Diwan-i-Khas of every Palace in Jaipur, this Raj Mandir has also inspired in such a way, that every inch will take you the ancient Rajasthani Royalty.

The blue floral carpets, the heavy wooden balcony staircase, the huge snack table at the counters for people to grab some bites in the movie theater, the vendor stalls at a few spots, the heavily hanging lights, the floral designs on the ceiling, every single thing of the main hall of this movie theater looks like a wonder.

A person must focus on the ceiling. It must have taken months to design such intricate crafting, which portrays the hugeness of a hall. The ceiling brings out the real beauty of Raj Mandir. I have roamed all over and clicked many pictures. I didn't want to step in because the place was amazingly stunning. I mean, a person can just stand and spend one hour just looking at the ceiling.

I'm not at all over describing it. You could feel the same if you would visit it. And then comes the main movie theater where the large screen exists. Remember those olden days movie theaters, where the screens used to be covered with curtains? You can such an elite and elegant movie curtain covering the whole screen and lifts before the movie starts playing and shuts in break time and re-open after the completion of the interval.

I felt a lot of nostalgia because being a 90's kid, I have been to such kinds of theaters and this has erased all those moments in my mind after witnessing the curtain-raising. It was indeed fascinating to watch.

There are three kinds of sections inside the Raj Mandir, segregated according to the cost of the ticket. You can get the tickets for 105 rupees, 170 rupees and 350 rupees for the balcony movie experience. I have clicked pictures from every segment with the help of my cab driver and tour guide.

The balcony, movie experience was amazing and I felt better than these multiplexes of Cine complexes with their recliner seats. Though the gap between the seats was an issue, the movie experience has crushed that one drawback in this theater.

Many tourists and visitors come here to just experience the theatrical experience of movies in Raj Mandir, though many of them don't know the language of Hindi. Mostly, Bollywood movies play in this theater. There are only one screen and four shows per day.

The most interesting fact is, this theater can welcome around 1165 people to watch a movie at once. Imagine thousands of people scattered in a perfectly organized concave-shaped movie theater with the red colored cushion chairs and sofas, watching a movie. It looks like an eye-feast. 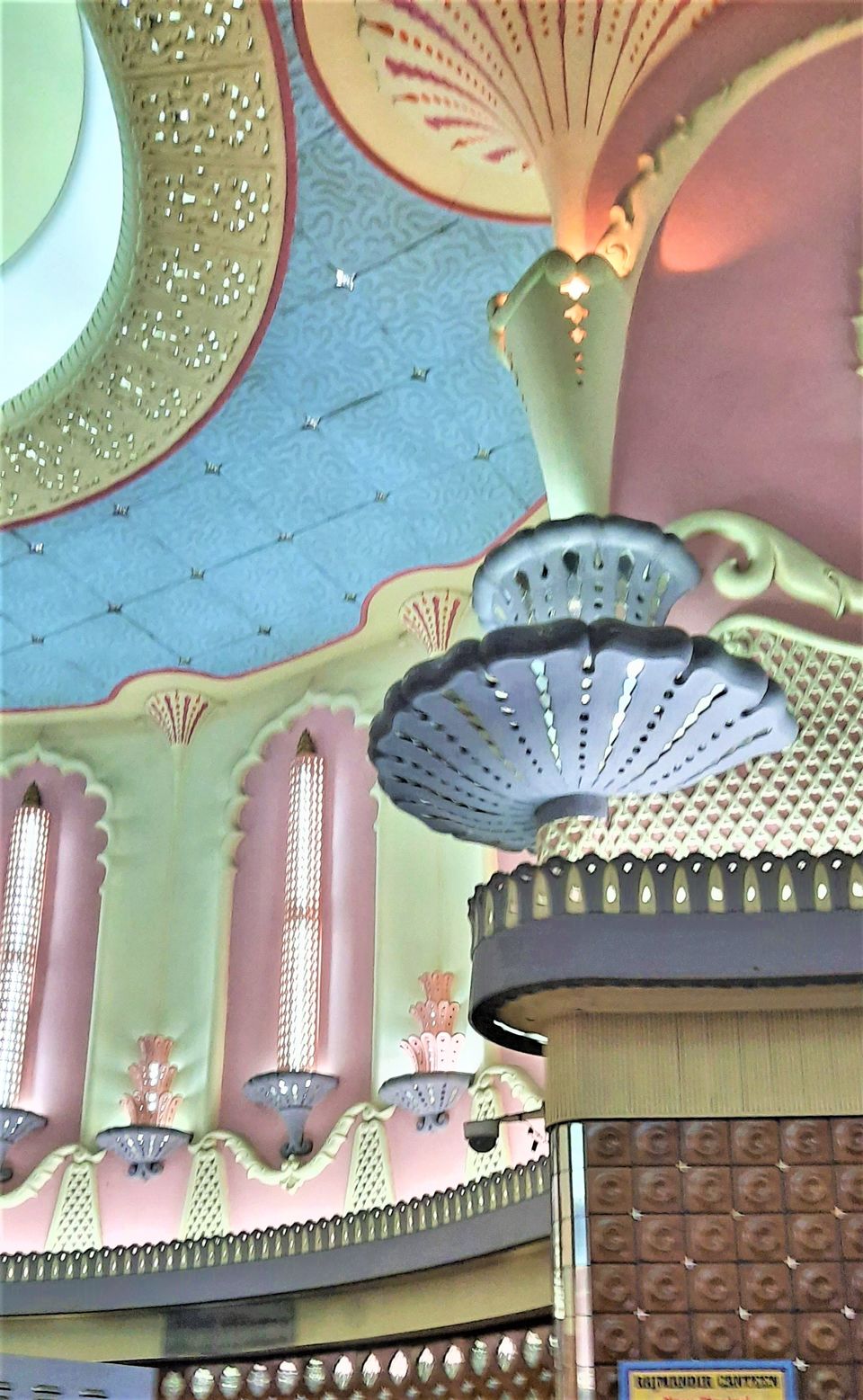 But, unfortunately, I couldn't see too many people that particular day, as I went to the late-night show, that too on a Tuesday for a movie which is a week old. Hence, it says everything. But I could find the mixed crowd and the cheering in and around the interiors of the Raj Mandir.

My trip was kind of fulfilled with the visit of the Raj Mandir because I always wanted to end up with something special when it comes to movie experiences and Raj Mandir helped me out to check one of the items in my wanderlust list. Indeed, after a lot of roaming in Jaigarh fort and Nahargarh fort and a lot of shopping in the Rajwadi market, I deserved to relax in this gorgeous movie experience. So, next time you visit, Jaipur, make sure that you also have an entertainment experience with an awesome movie and interiors at Raj Mandir. 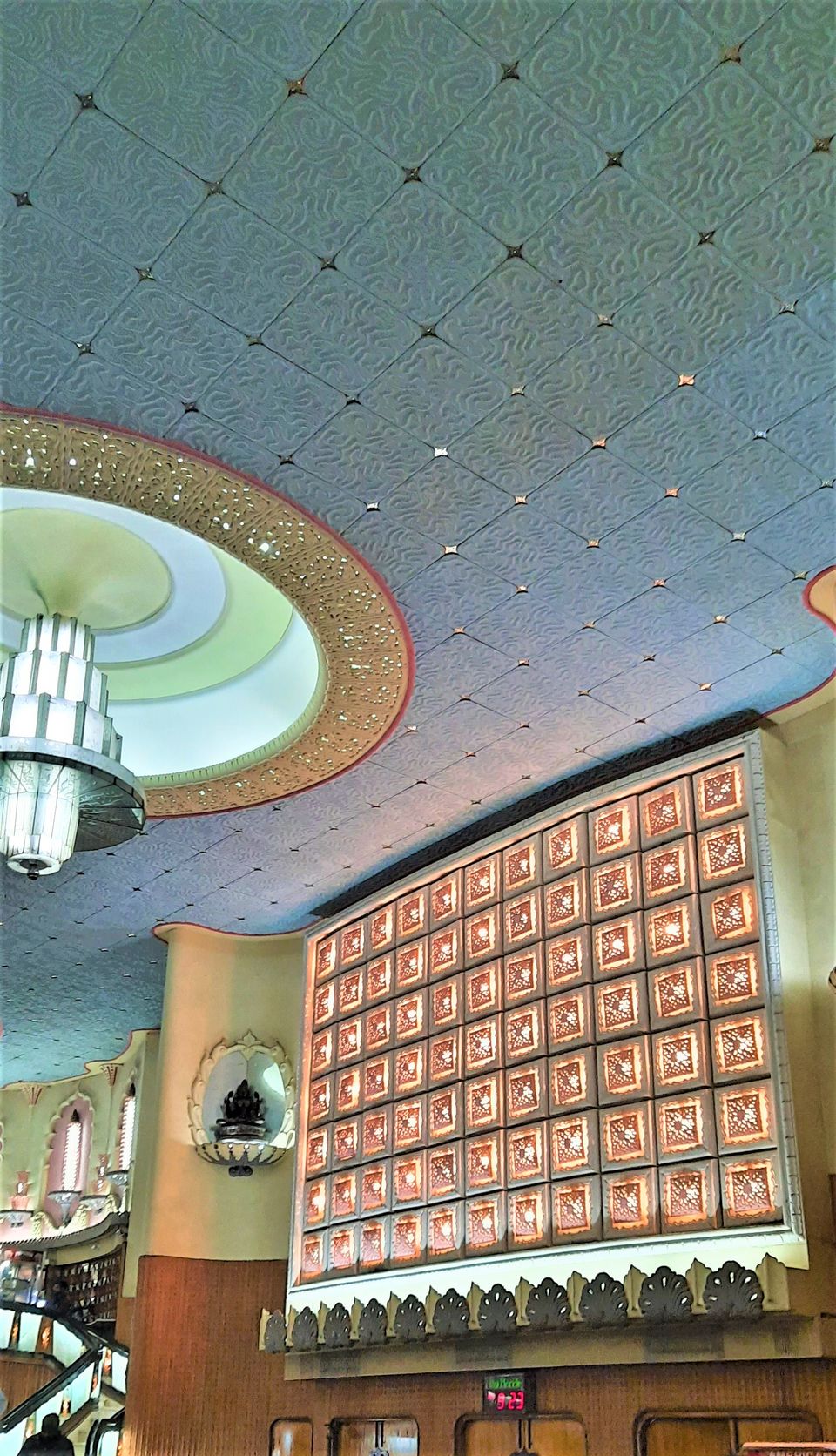