Why you should head to India's desert city in the summer 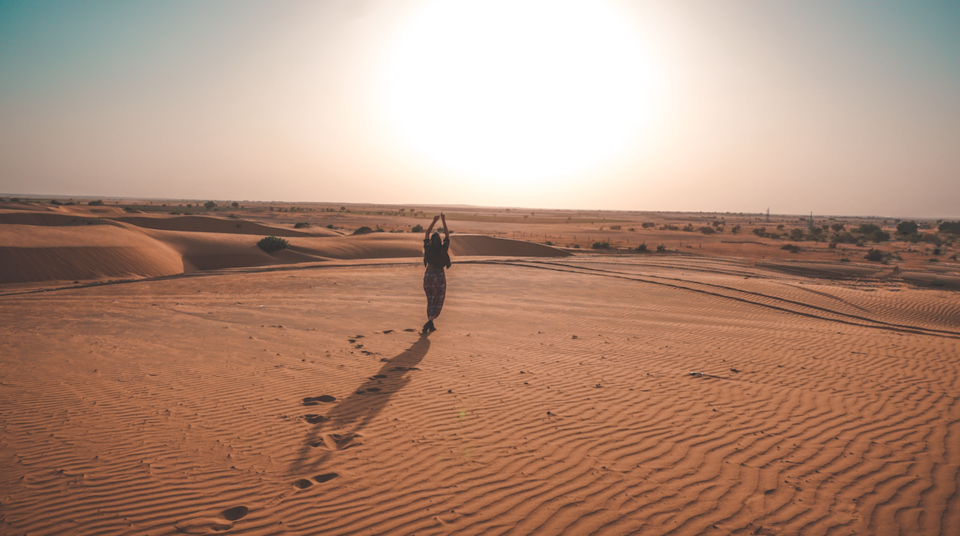 Passing the town square with "Padharo Mahare Desh" scribbled upon one of the gold sandstone buildings that gives it the famous title "Golden City," one doesn't quite realise yet, just how warm that Rajasthani welcome really is. It is one of those many endearing attributes of the city that make me want to return to this land of the dunes. The entire town is a settlement within or up to 3 kms around the fort- as was the norm when all livelihoods were in some way linked to those around the king's royal courts, a trend still visible in the smaller Rajasthani towns.

Jaisalmer is a treasure trove of wondrous experiences for the curious traveller. It's a city that offers more than monumental eye candy, going beyond the forts-and-architectural-heritage route, with authentic Rajasthani folk performances, desert camps, adrenaline-pumping dune bashing and sublime sunsets spotted on camel backs. The only catch? It comes with a sun that burns your back at the very thought of stepping out before 4:00 pm. Or so the story goes. But I'm here to make a compelling argument in favour of a midsummer holiday in one of the hottest places in the country.

As is the case with most places, each offers a particular type of experience for a particular type of traveller. Jaisalmer, unlike Jodhpur, is a city that is open all night. Due to the limitations that the overbearing heat puts on its visitors, most attractions and offerings in Jaisalmer take place when the sun is on its way to bed. Jaisalmer fort is a combination of history and market place- both situated inside the main fort area. While the museum shuts by 5:30, the fort remains open well into the night, all the way till midnight, and shopkeepers stay until relatively late into the evening, selling goods and beckoning potential customers. The massive Jaisalmer fort is also lit up throughout the night, in soft gold shades that beautifully compliment the gold sand stone that has been arranged to form the fort. I say "arranged" because its a fact that the fort was built without cement. Slabs of sandstone were placed and packed together to create the entire fort, and years and earthquakes later, it stands just as strong without a cement binding its bricks together.

Other places worth visiting in the city are open till late evening as well. Gadisar lake is open all night, and boats are available for hire till 8:00 pm. Rooftop cafes are open till late in the night, overlooking the lit-up fort and palace hotels in the city. The city is also safe for a solo traveller during the day as well as the night.

All activities in the desert begin past 5:00 pm. That's when the camel rides, dune bashing and camp visits begin. The general itinerary includes dune bashing followed by a camel ride, a pitstop to watch the sunset, followed by a visit to one of the camp sites where folk dance performances take place in the evening and snacks and tea is served to all guests. In addition, you would avoid the many lines of tourists that cramp Jaisalmer in the winter, leaving you to explore Jaisalmer in solitude.

The best way to visit a city where all activities take place in the evening, is through a staycation. Check into a luxury resort like Marriott or Suryagarh, or into a family resort like Club Mahindra: with dedicated kids play areas and great restaurants in-house, spend the day relaxing at the hotel or by the pool and finally venture out in the evening to explore the place at your leisure. As far as such places go, Jaisalmer is one of the best options. Since tourism takes a deep dip during the summer months, luxury properties offer huge discounts, with prices as low as INR 5,000 per night (including taxes) at Marriott, making it a steal. Flights to Jaisalmer are also significantly cheaper during the summer. In Jaisalmer, summer lasts all the way till the beginning of October- anytime between August and October would be a decent time to visit. As the world flocks to the hills, it might be worth your while to explore a city that is otherwise laden with crowds during season time.